DefenseReview does not know, at this point, how the system works, nor how it is able to withstand the intense heat and speed of a jet fighter aircraft, but the company (AAE) claims that it can.

Here is the link to the AAE’s information sheet on IR-Stealth 5 Jet:…

David Crane started publishing online in 2001. Since that time, governments, military organizations, Special Operators (i.e. professional trigger pullers), agencies, and civilian tactical shooters the world over have come to depend on Defense Review as the authoritative source of news and information on "the latest and greatest" in the field of military defense and tactical technology and hardware, including tactical firearms, ammunition, equipment, gear, and training.
Previous YHM/Sound Tech ‘Phantom’ Quick-Attach/Detach Sound Suppressors for Spec-Ops
Next Laser Gunship Fires Advanced Tactical Laser (ATL) Against Ground Targets 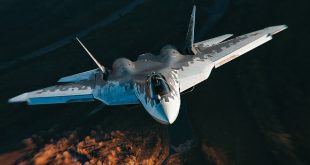 By David Crane david (at) defensereview (dot) com Photo(s) Credit: The Russians, and The Aviationist …