We here at DefenseReview are big fans of Aimpoint products, particularly the CompM2 – M68/CCO (Close Combat Optic), CompM4 and Micro T-1 red dot combat sights, and the 3XMag magnifying optic. Aimpoint combat optics (optical sights) are combat proven and highly trusted by professional trigger pullers the world over, and for good reason. As the aforementioned products have demonstrated, the company isn’t content to rest on its laurels, but rather is constantly innovating and developing new products that can assist the warfighter, LE professional, and civilian shooter.

That’s why when Aimpoint’s president, Lennart Ljungfelt, presented the Aimpoint BR8 Fire Control System (FCS) for infantry small arms and light weapons on May 22, 2008 during the Fire Control session at NDIA International Infantry & Joint Services Small Arms Systems Symposium 2008, it wasn’t much of a surprise to Defense Review. Actually, DefRev missed Mr. Ljungfelt’s lecture, but that doesn’t mean we can’t report on it. So, what’s the BR8 FCS’ purpose and how does it work?

The Aimpoint BR8 FCS is a…

fully integrated sight and fire control system, meaning it’s basically a computerized combat optic that provides the warfighter with an instantaneously-compensated precision-aiming solution to allow him hit targets with various lethal munitions out to 600 meters (600m) in dynamic combat/warfare enviornments, including urban warfare/MOUT environments. Put another way, the BR8 provides instant aiming/targeting correction in order to compensate for projectile drop out to 600m, greatly enhancing first-shot hit/kill probability. A warfighter can use a BR8 to hit the target first time every time with low-impulse/low-velocity 40mm (40x46mm) grenades, high-impulse/high-velocity 40mm (40x53mm) grenades, and shoulder-launched projectiles (like 84mm Carl-Gustaf recoilless rifle rounds, for instance).

So, how does it work in practical application? While looking through the site, find your target. Then, aim at your target (by puting the solid red dot on it) and measure the range. A secondary blinking/flashing red dot will appear beneath the initial solid red dot. This blinking red dot is the new, corrected aiming point. So, now just superelevate the weapon until the lower blinking red dot is on the target, and fire. The target should go away.

Aimpoint is presently working on reducing the BR8’s size and weight. Time will tell just how light and compact they can make it. DefenseReview hopes Aimpoint can cut the BR8’s size by and weight by at least 50%. If they can get the weight all the way down to approx. .5 lbs, then they’d really be in business. However, even at the BR8’s current size and weight, it’s a very cool piece of tactical hardware.

David Crane started publishing online in 2001. Since that time, governments, military organizations, Special Operators (i.e. professional trigger pullers), agencies, and civilian tactical shooters the world over have come to depend on Defense Review as the authoritative source of news and information on "the latest and greatest" in the field of military defense and tactical technology and hardware, including tactical firearms, ammunition, equipment, gear, and training.
Previous Fury and CAMCOPTER S-100 UAS/UAVs Armed with Lightweight Multirole Missile (LMM)
Next IWI Negev Commando LMG/SAW and Micro-Tavor MTAR-21 Bullpup Assault Rifle Demo 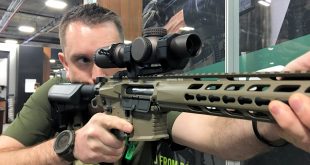