Another very interesting vehicle concept DefenseReview saw at AUSA Winter Symposium and Exhibition 2007, albeit in 1/18-scale mockup form, was a high-speed "High Speed Amphibian" craft/vehicle called the Amphibious Combat Craft/Expeditionary (ACC/E) that can reportedly transition back and forth between land and water in approx. five seconds. The ACC/E is being designed and developed specifically for fast amphibious insertion and extraction of Special Operations personnel. To develop it, Lockheed Martin is utilizing Gibbs Technologies Ltd’s patented High Speed Amphibian (HSA) technology. Gibbs technologies developed their HSA tech for their Aquada, Humdinga, and Quadski amphibious vehicles.

Gibbs describes HSA as "one of the most exciting and ground-breaking developments in automotive and marine engineering," enabling an amphibian "to perform fast on both land and water." Just from what Defense Review has been able to glean from the Gibbs Technologies website and various articles about their vehicles on the web, DefenseReview is inclined to agree with the company’s "ground-breaking" claims.

From the mock-up, the Lockheed ACC/E resembles a modified, modernized, stealthified (anti-radar stealth) and "amphibianized" …

Vehicle armament (a.k.a. vehicular armament) will reportedly incorporate a Kongsberg Protector M151 RWS (Remote Weapon Station) with either a .50 BMG (.50 Cal.) heavy machine gun (perhaps a Browning M2HB "Ma Deuce" .50 BMG HMG), a 7.62x51mm NATO/.308 Win. GPMG/MMG (General Purpose Machine Gun / Medium Machine Gun) (perhaps a FN M240-Series GPMG), or a 40mm GMG/AGL (Grenade Machine Gun/Automatic Grenade Launcher), most likely the Mk-19 GMG. It’s also been reported that the ACC/E might be outfitted with an anti-armor missile launcher. As it happens, DefenseReview got to give the Kongsberg Protector M151 a whirl at the show, and we’ll be reporting on Kongsberg’s stabilized remote weapon stations (RWS) a.k.a. stabilized remotely-operated weapon stations (ROWS) in a subsequent article. 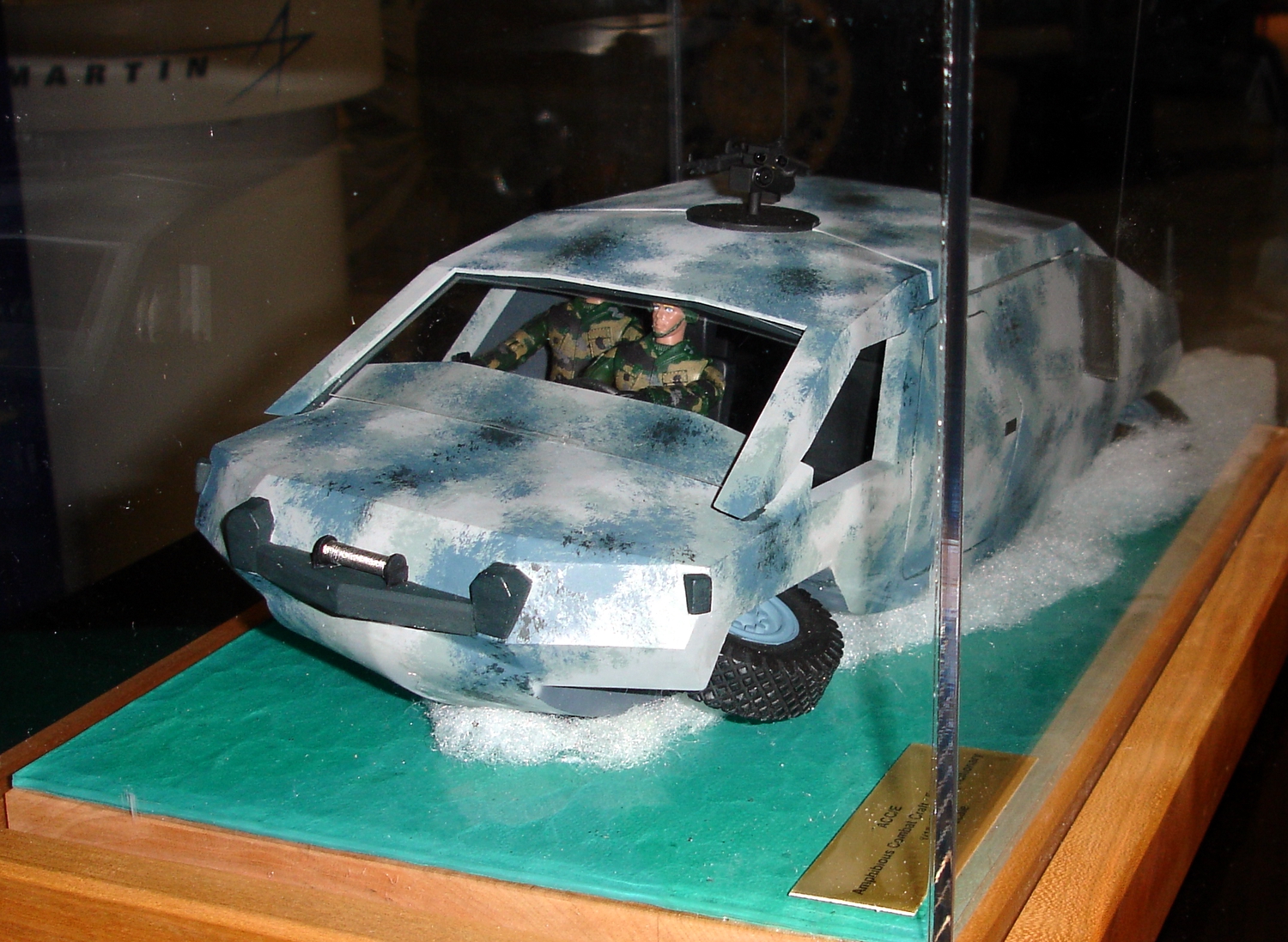 As the article photos demonstrate, the ACC/E vehicle mock-up sports a winch and an ACU-colored camouflage pattern, although the camo pattern itself (on mock-up) is different than ACU. The amphibian vehicle pictured in the poster (below) exhibits a similar camo pattern to the mock-up.

1) Water Jet, which takes water in, accelerates it, and discharges it at high velocity out the back of the amphian craft, thus propelling the vehicle at high-speed through the water. The company (Gibbs) claims that this water jet system helps make the amphibian watercraft highly maneuverable in the water, and that it is easy to repair and service.

3) Hull, which provides a "stable planning surface" and allows the Gibbs vehicles to skim/plane over the water surface once the water jet propells the vehicle to sufficient speed. The amphibian hull utilizes a keel fin for directional stability, and it grips the water for handling at high-speeds on the water.

The Lockheed Martin representative we spoke with at the booth was very hush-hush about the vehicles, but DefenseReview is going to try to get more info on it ASAP. We’re big fans of James Bond-type tech, over here, and these militarized high-speed amphibious vehicles/craft are very James Bond. So, don’t be surprised if you end up seeing them in the movies–or in a future combat environment. Assuming they exhibit adequate performance, prove reliable and durable, and are properly outfitted and weaponized, the high-speed Amphibious Combat Craft/Expeditionary (ACC/E) and Amphibious Combat Craft/Riverine (ACC/R) weaponized amphibious combat vehicles will most likely make valuable contributions to military Special Operations in the 21st century battlespace.

Note: It would be great if these vehicles could be armored in some way. However, any type of armoring would most likely increase the weight of the vehicles to the point that their performance in the water and on land would most likely be severely hindered. So it’s probably impossible, at least until nanotechnology improves to the point that super-lightweight nanotech composite armor could be utilized. 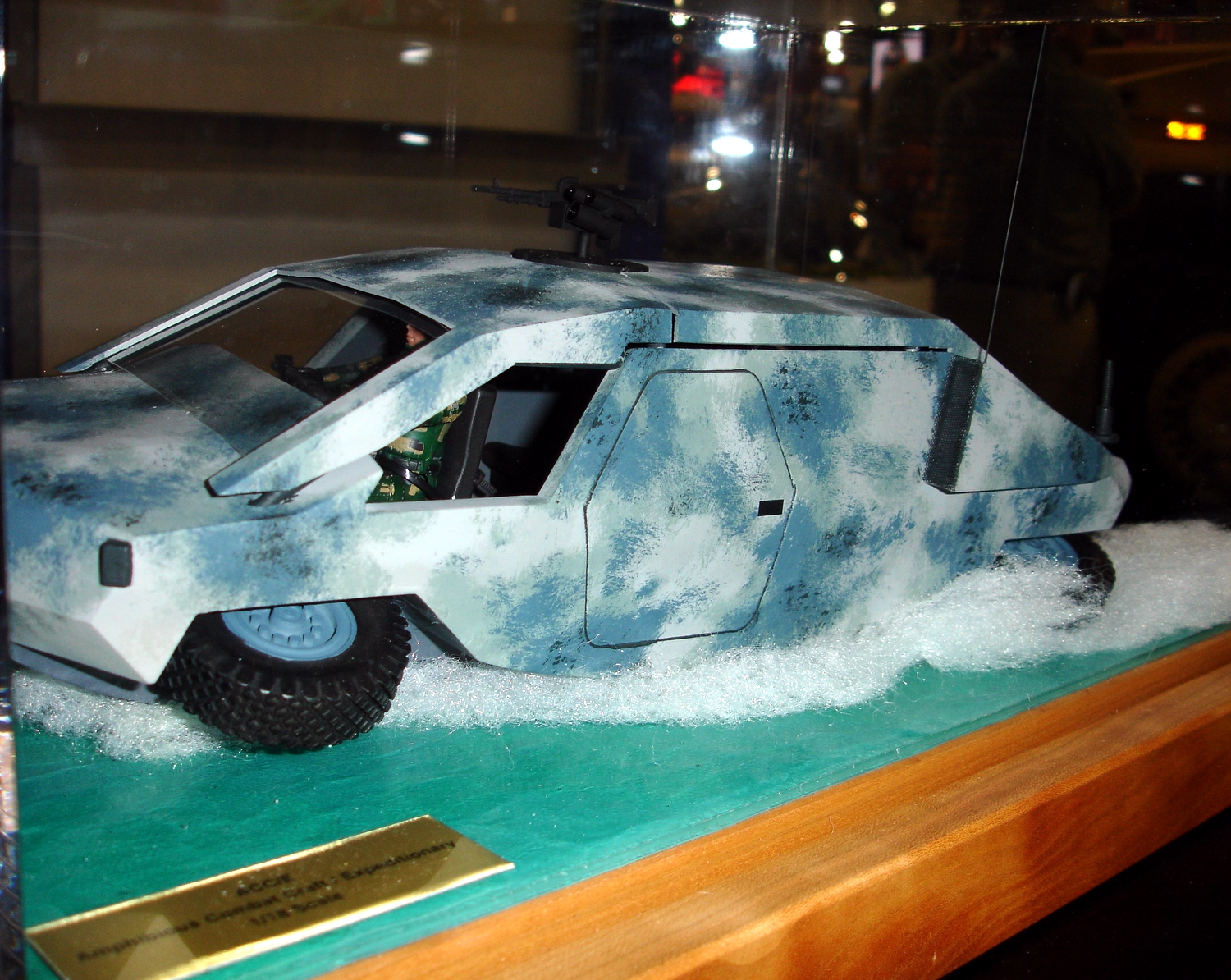 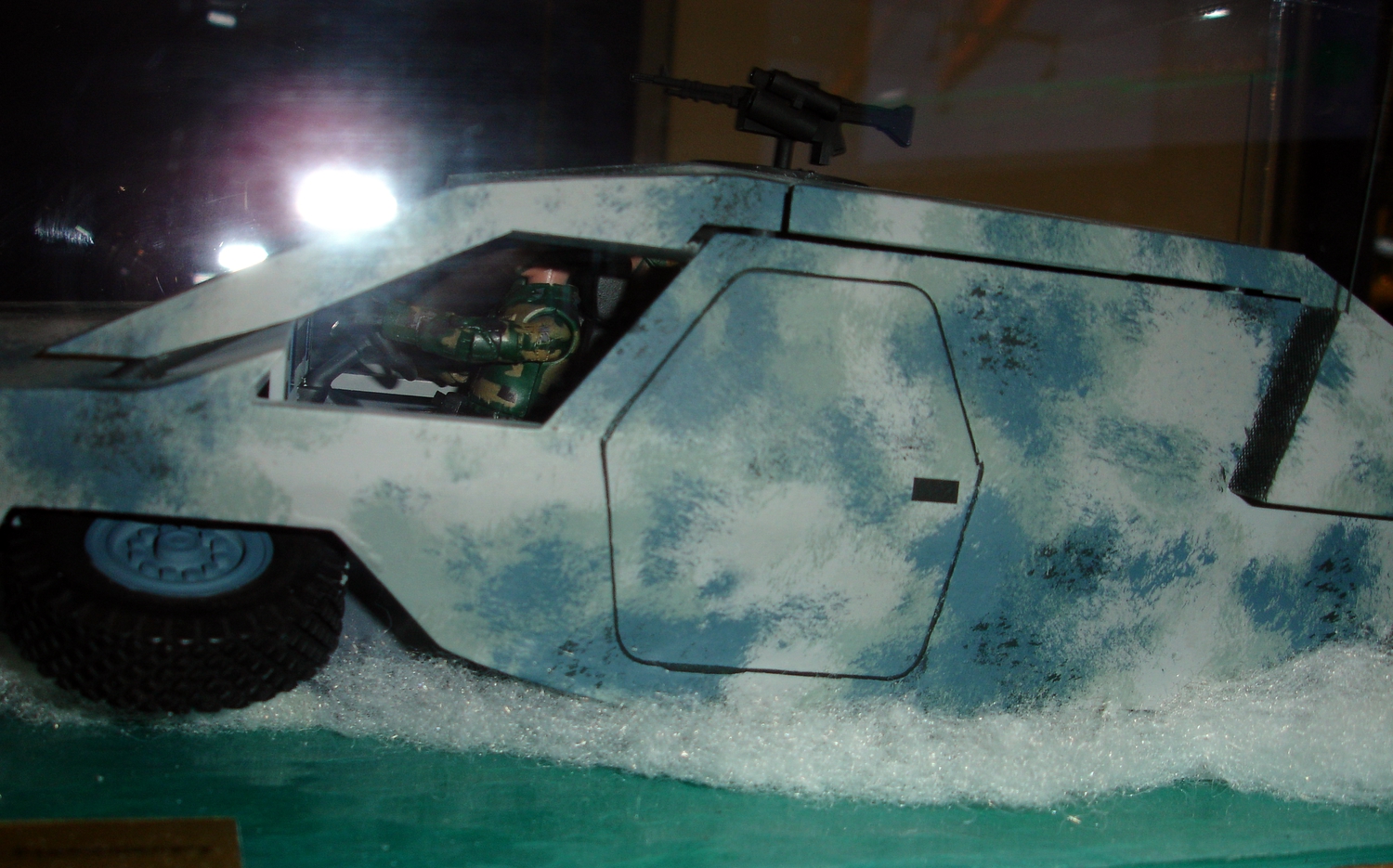 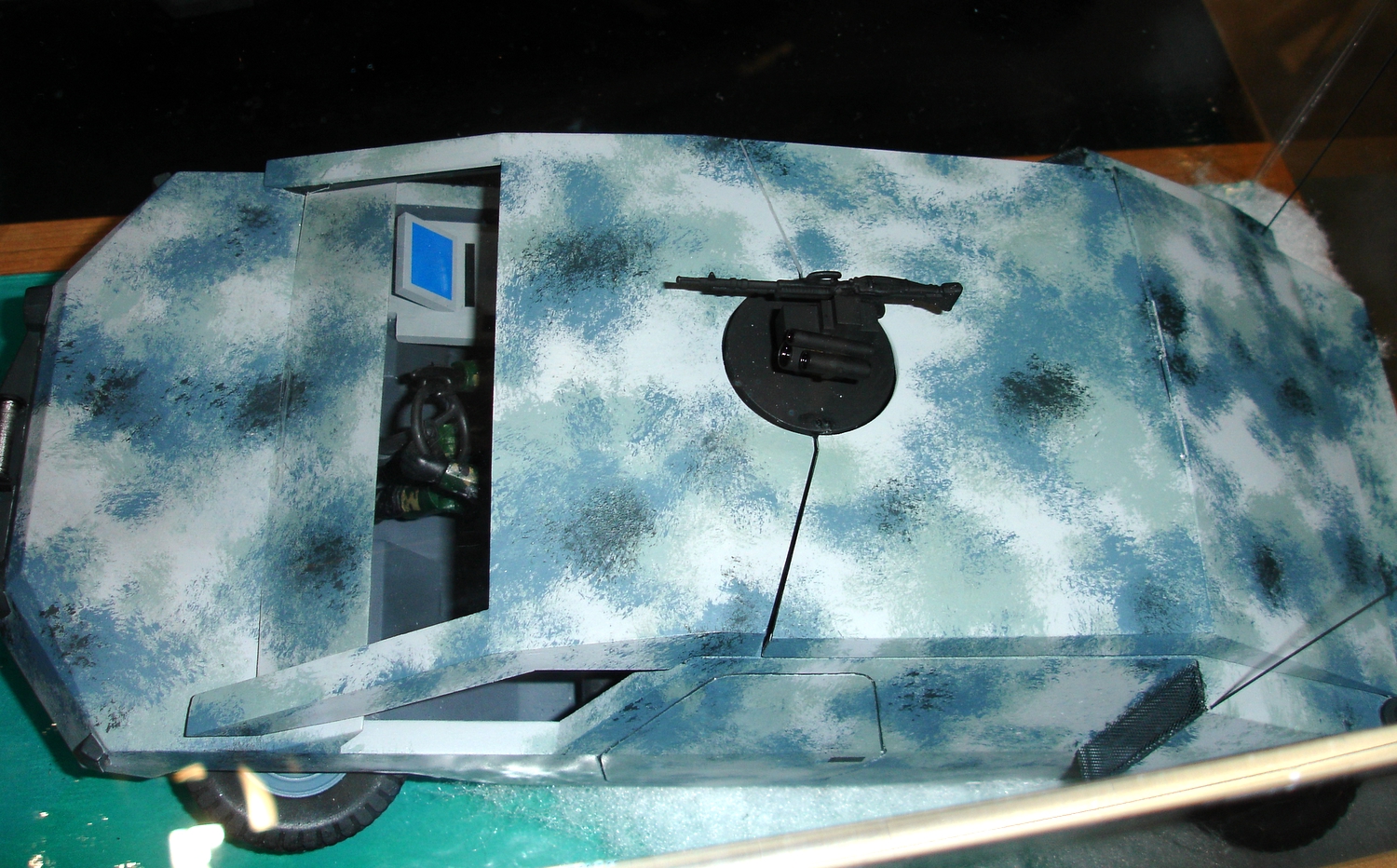 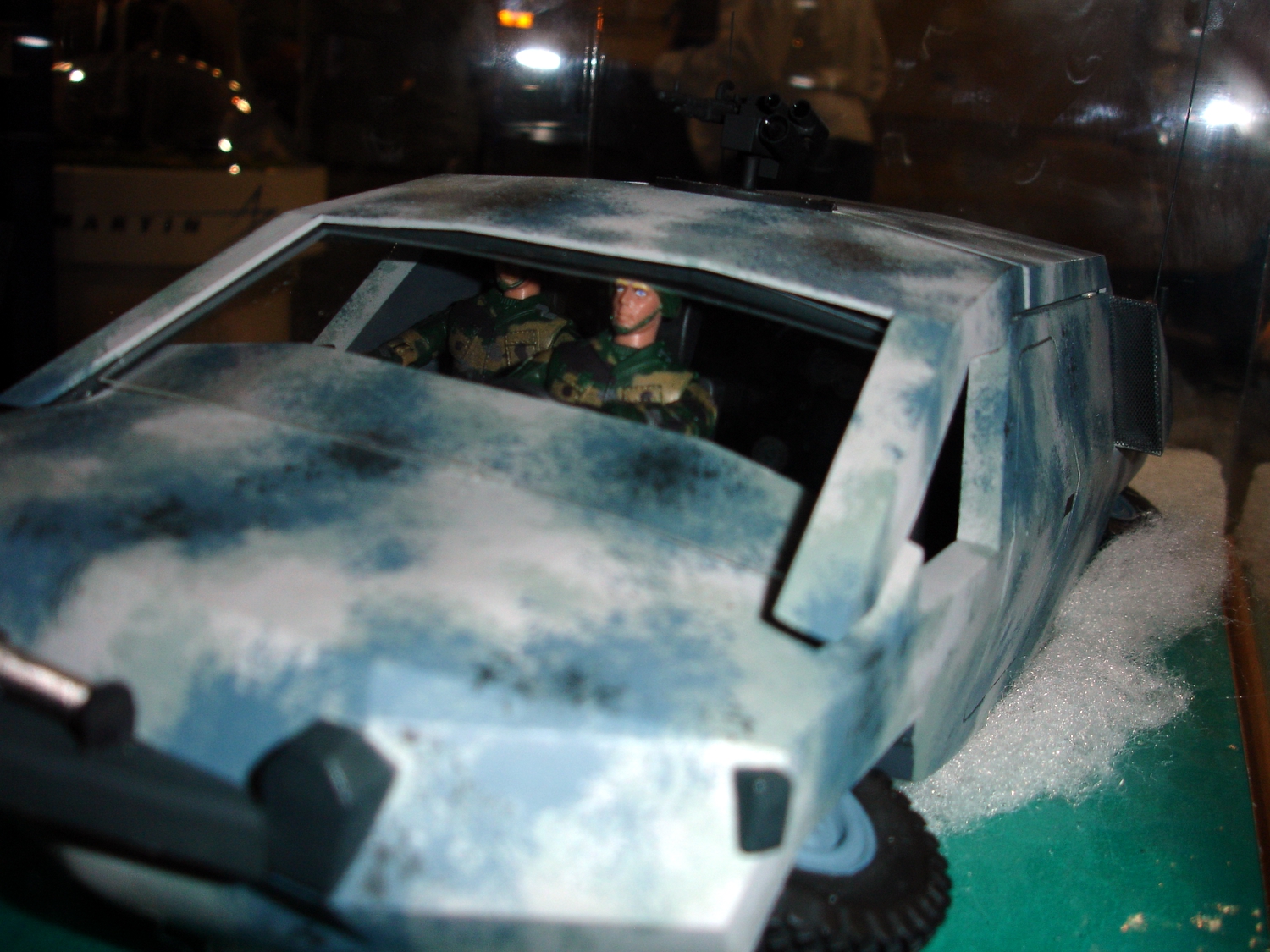 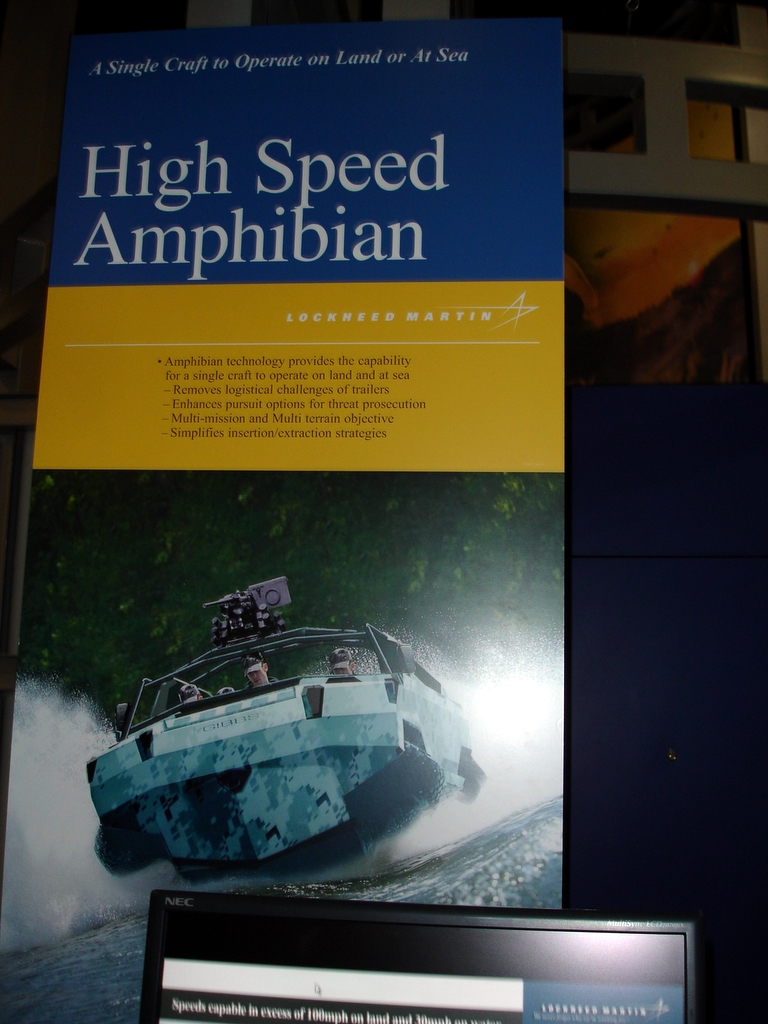 David Crane started publishing online in 2001. Since that time, governments, military organizations, Special Operators (i.e. professional trigger pullers), agencies, and civilian tactical shooters the world over have come to depend on Defense Review as the authoritative source of news and information on "the latest and greatest" in the field of military defense and tactical technology and hardware, including tactical firearms, ammunition, equipment, gear, and training.
Previous AAI Lightweight Small Arms Technologies (LSAT) Prototype on Display at AUSA
Next DefRev Exclusive: Oshkosh Truck Joint Light Tactical Vehicle (JLTV) Concepts