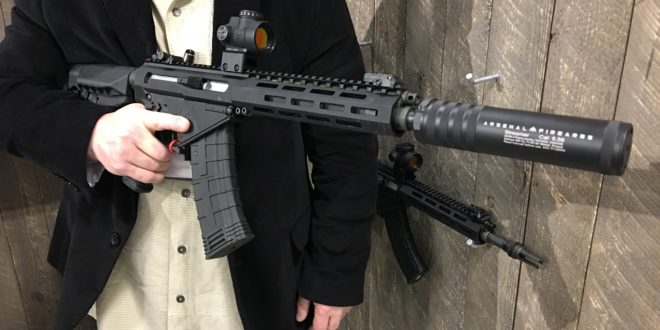 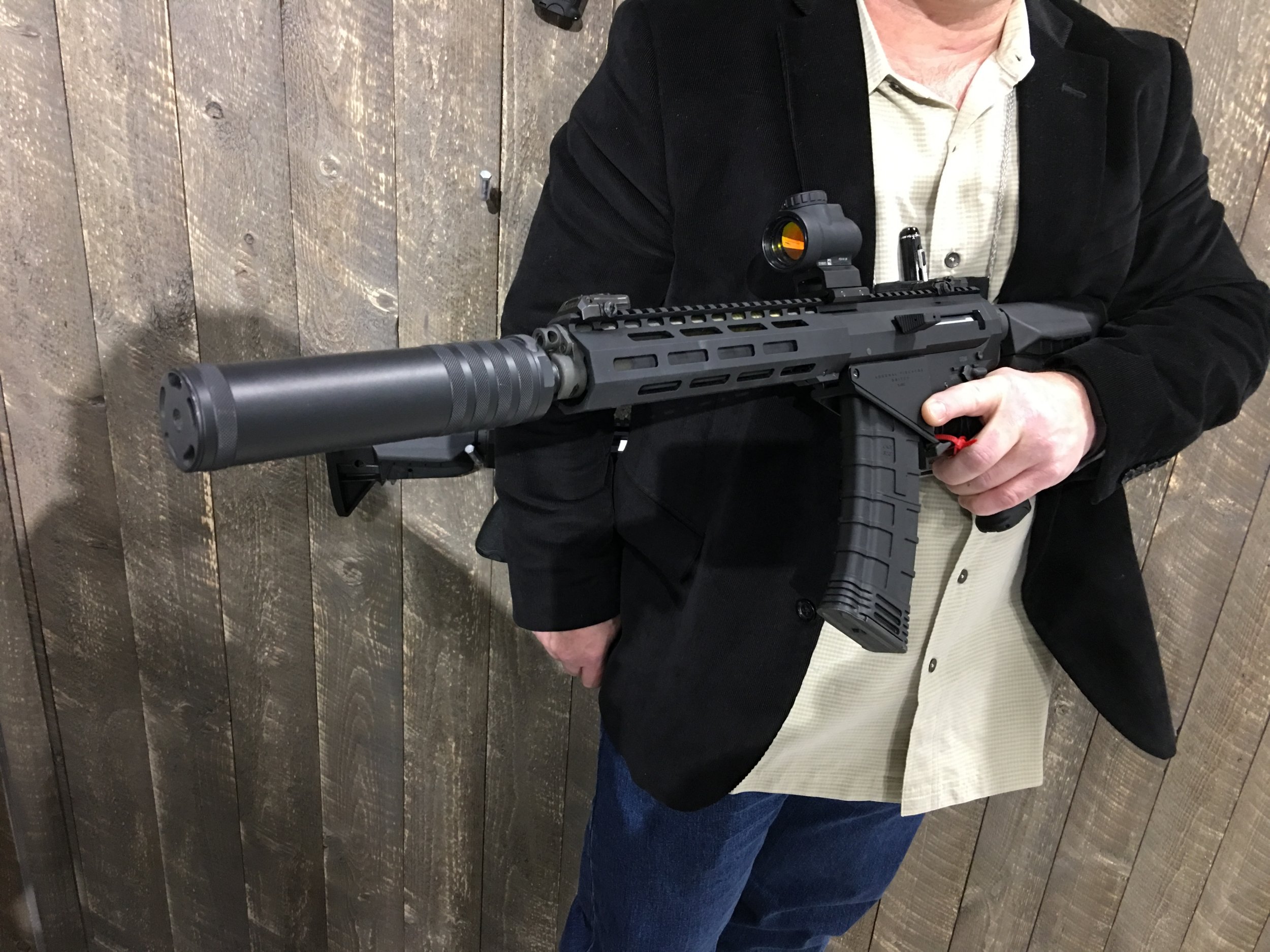 The Arsenal Firearms AF Stryk B stiker-fired compact 9mm combat/tactical pistol certainly wasn’t the only new and interesing firearm or product DefenseReview (DR) got to view and handle at the Salient Arms International (SAI)/Arsenal Firearms (AF) booth at SHOT Show 2017–not by a long shot. While we were there, we got the chance to speak with a couple of interesting gentlemen who showed us the new AF SWITCH 7.62x39mm Russian and 5.45x39mm Russian-caliber piston/op-rod (push-type operating rod) tactical AR carbines and AF Streamer QD556-A (5.56mm NATO) and QD762-A (7.62mm NATO) low-back-pressure QA/QD (Quick-Attach/Quick-Detach) rife silencer sound suppressor system that we understand is available in both respetive calibers.

Let’s start with the Arsenal Firearms AF Switch, which was designed and developed by one Michael Brown, who was kind enough to spend some time with us and take us through the gun’s design features at the company’s booth (see DR video below). According to Brown, the guns accept standard AK (AK-47/AKM and AK-74) mags (magazines), which secure very positively, with no play. The Switch can also, according to Brown, handle any available ammo (including corrosive military ammo) and any combat-type adverse conditions, including “over the beach” salt water-and-sand conditions. We assume this is due to the combination of the piston/op-rod design and chrome-lined internal parts. The adjustable gas block has on/off capability and high and low settings for suppressed or unsuppressed/standard fire. “The first thing that’s wear out on this gun is your ammo budget”, says Brown. 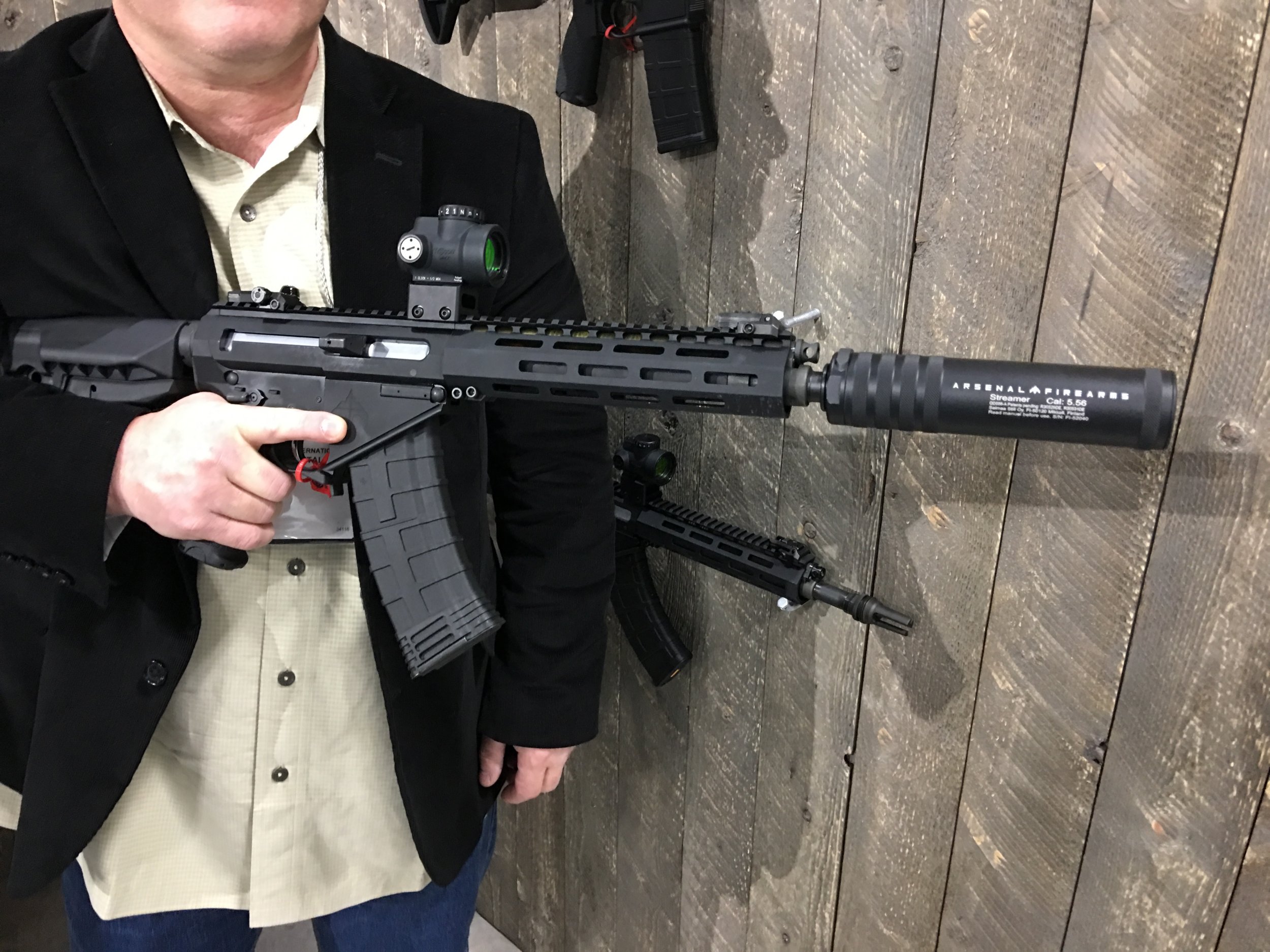 The AF Switch bolt carrier group (BCG) system Brown designed and developed is ambidextrous (with charging handles sticking out both sides), and locks back after the last round. You can release the BCG by simply bumping the telescoping/retractable buttstock forward. The charging handles on the prototype Switch DR saw were reciprocating, but Brown is developing non-reciprocating charging handles, which were still in the testing stage during filming. Oh, and you can release the mag by pushing forward on the mag release lever with your index finger, or via the traditional method (see DR video below).

There are two variants of the AF Switch tactical AR carbine in each caliber, one with a standard AR-type buffer tube system, and a down-folding variant with no buffer tube that doesn’t interfere with any of the weapon’s controls. DR looks forward to seeing that.

You can get an AF Switch AR carbine with either a KeyMod or M-LOK modular rail system/tactical handguard, and there are rail extensions available, if you need more rail estate (see what we did there?). 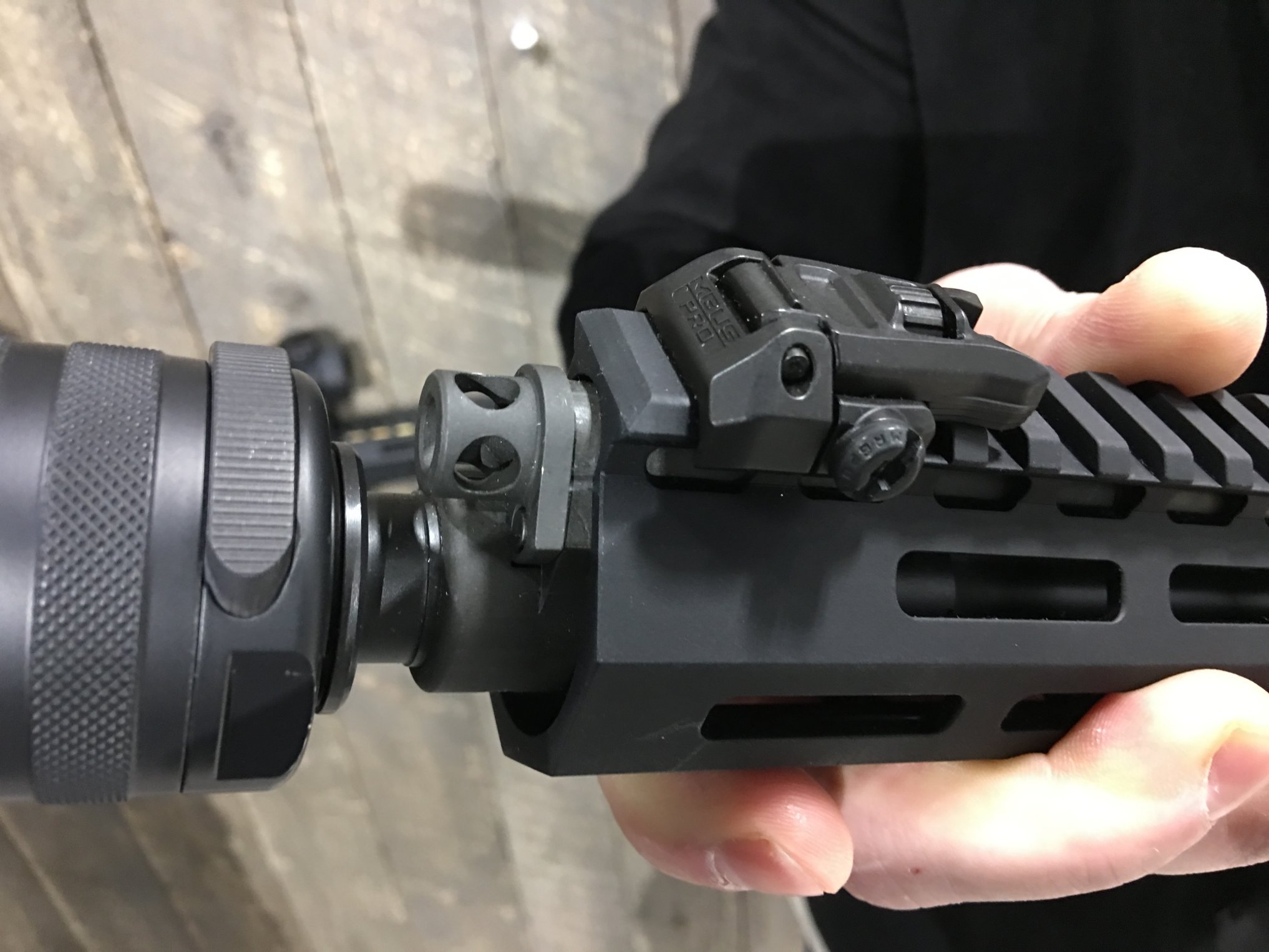 Now, on to the Arsenal Firearms AF Streamer QD556-A and QD762-A QA/QD low-back-pressure muzzle cans (silencer/sound suppressors) designed by a design team at Finnish company Saimaa Still Oy. The Streamer cans get their name from their proprietary “Stream-Through” front venting technology, which vents gases out the front (see DR video below) to lower the back pressure and virtually eliminate “blowback”. This reduces or even eliminates hot gases and particulate matter coming back and hitting the shooter in the face, and eases weapons cleaning and maintenance, since the rifle/carbine/SBR’s (Short Barreled Rifle) internal parts don’t doesn’t get as dirty. The extremely-lowered back pressure also obviates the requirement for different gas settings on the gas block, so you can shoot suppressed or unsuppressed with the same settings. According to an email we just received from Mr. Sjogren (on 3/29/17), the QD556-A and QD762-A Streamer cans are essentially further-developed/product-improved variants of the earlier Saimaa Still AK 545L and QD762L cans, which were developed for Kalashnikov AK-47/AKM and AK-74 rifles.

The Streamer QD556-A and QD762-A rifle suppressors have superior sound suppression, and can be opened for maintenance. Some additional performance info from Harri Sjogren via email (sent on 3/29/17): 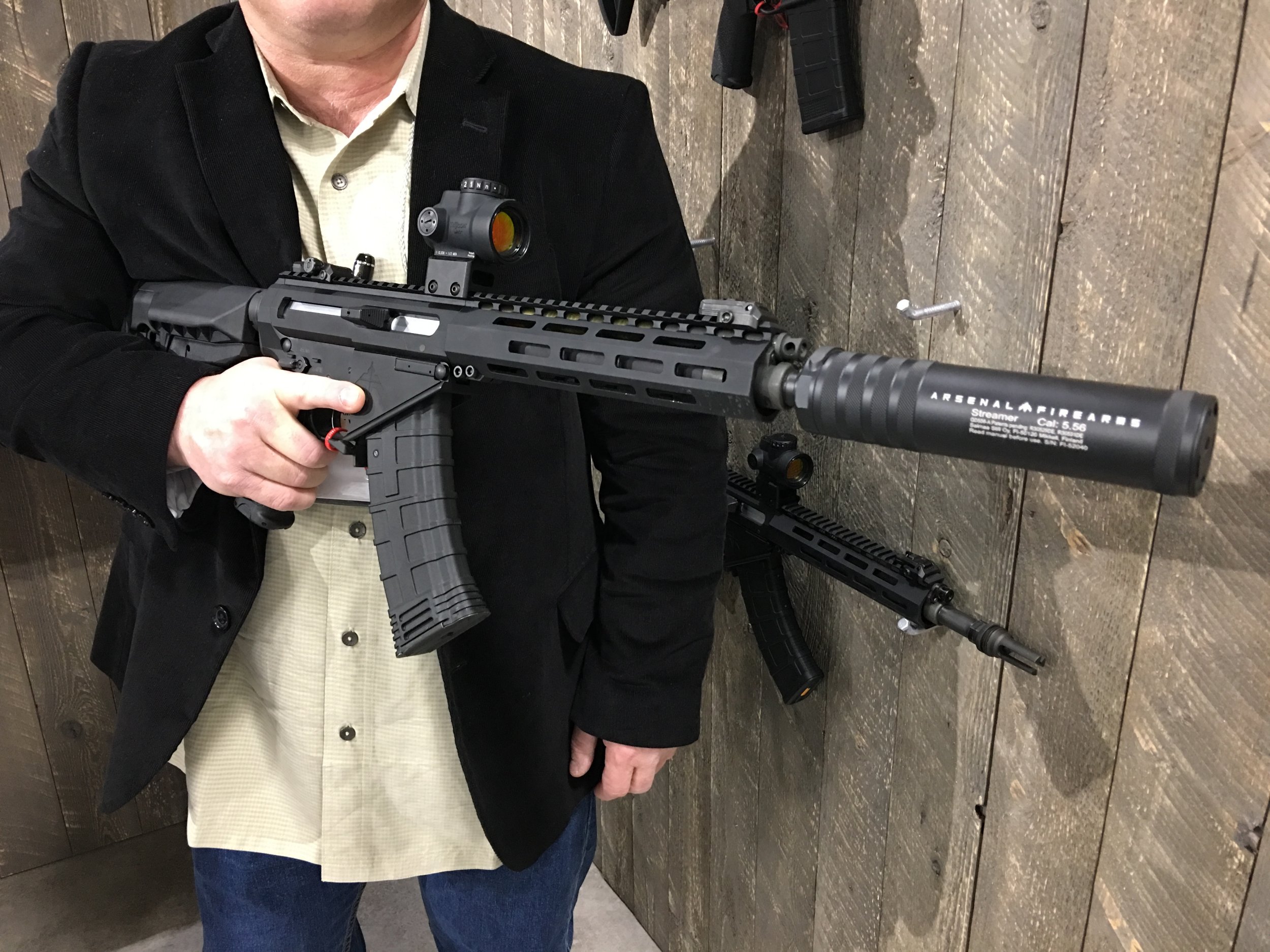 Bottom line, the Streamer cans are the most interesting suppressors Defense Review’s seen since the OSS Suppressors turbine design (which DR’s covered in some detail) and the JJFU Aero-Sonic Suppressor 5.56mm can aka Squash of Death, which DR’s actually shot. Anyway, the Streamer vents gases out the front (see DR video below)

Editor’s Note: While DR’s never been to Finland, we’re big fans of the Finnish military, as well as the individual military operators we’ve met so far, so we’re inclined to take whatever Finnish weaponry we encounter very seriously, including the Streamer. The product looks very good to us. We’re just waiting on the decibel-reduction numbers, as well as some accuracy and reliability/durability data. DR’s going to contact Mr. Sjogren to see what we can obtain in this regard. 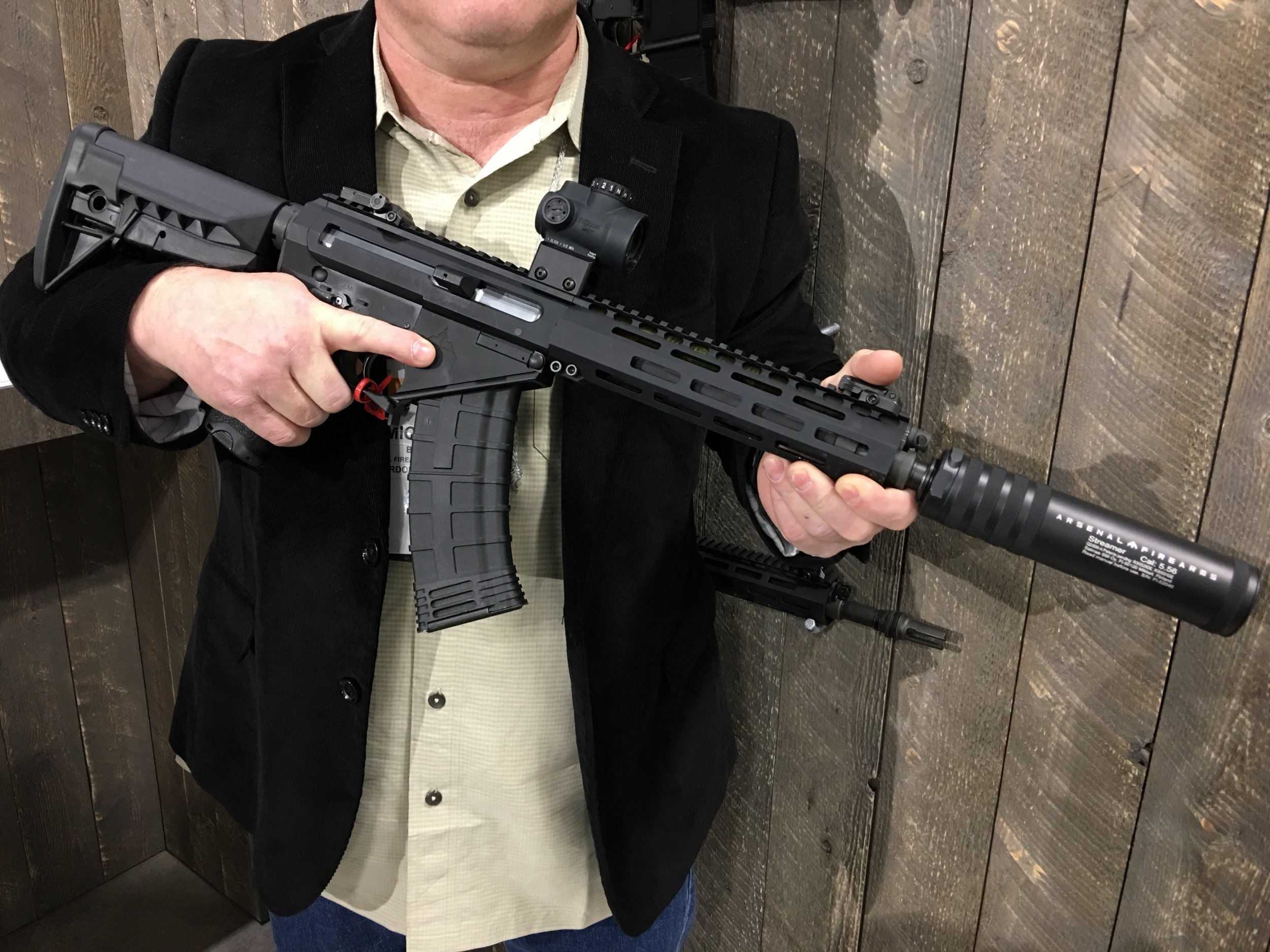 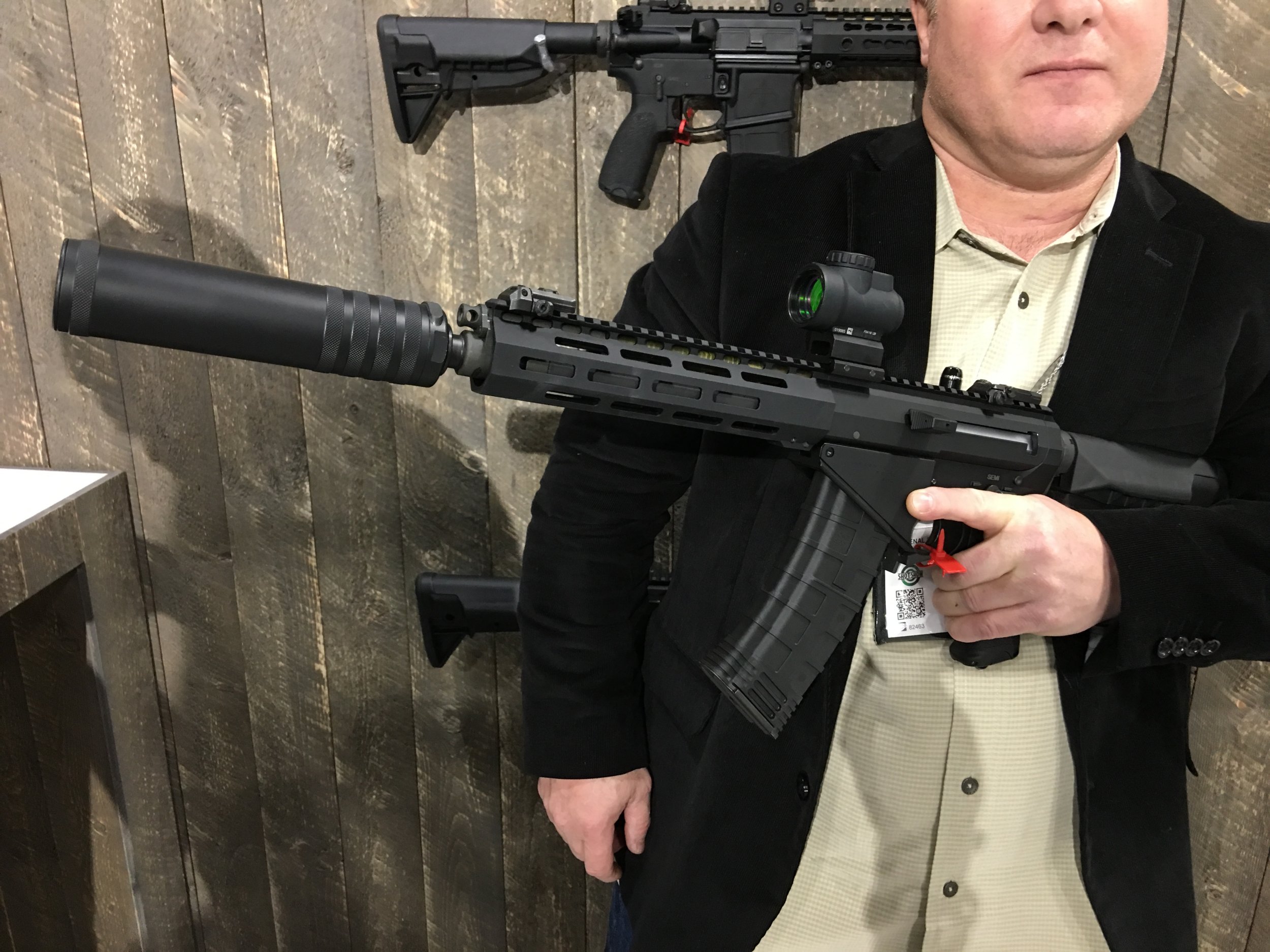 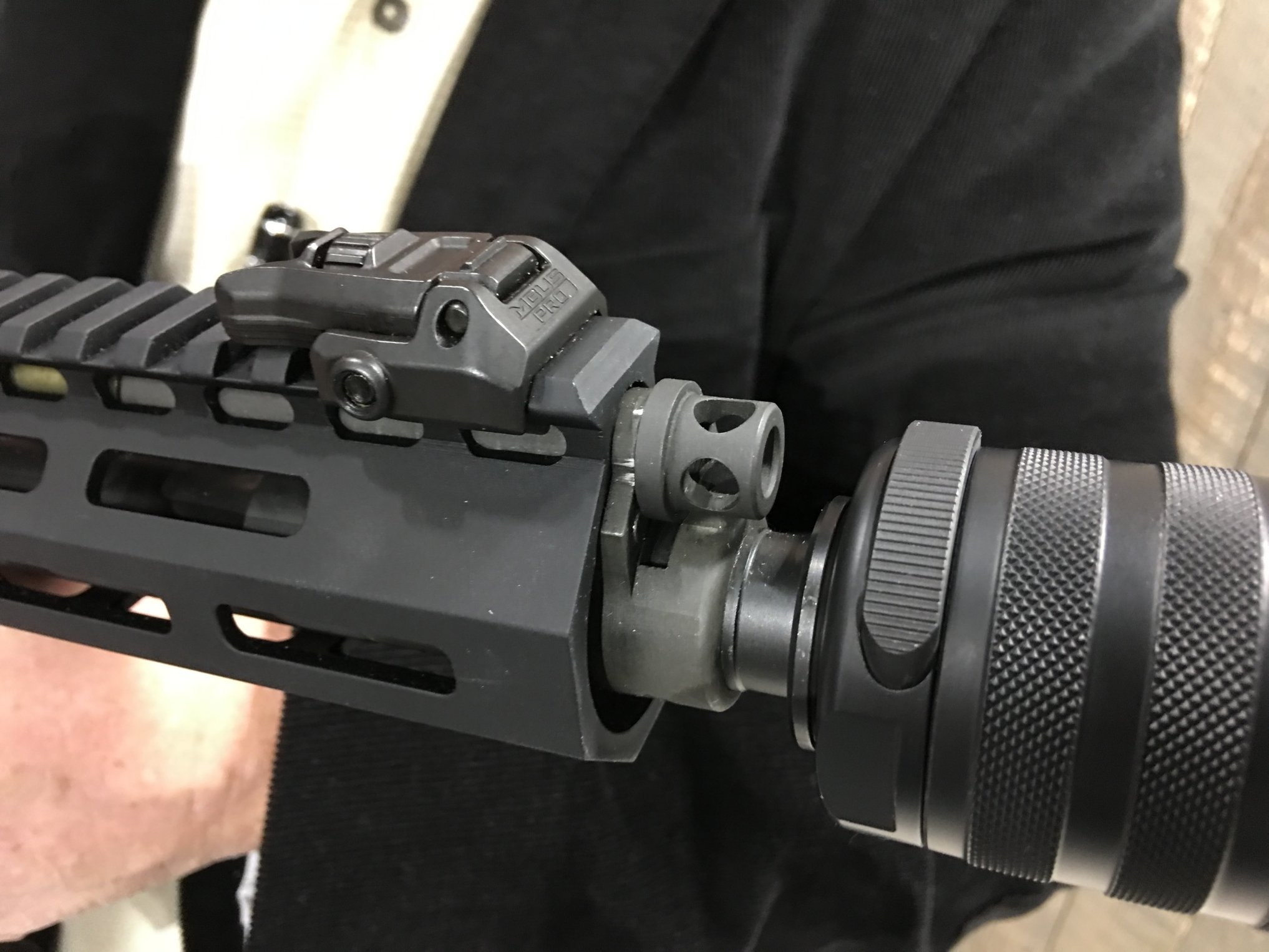 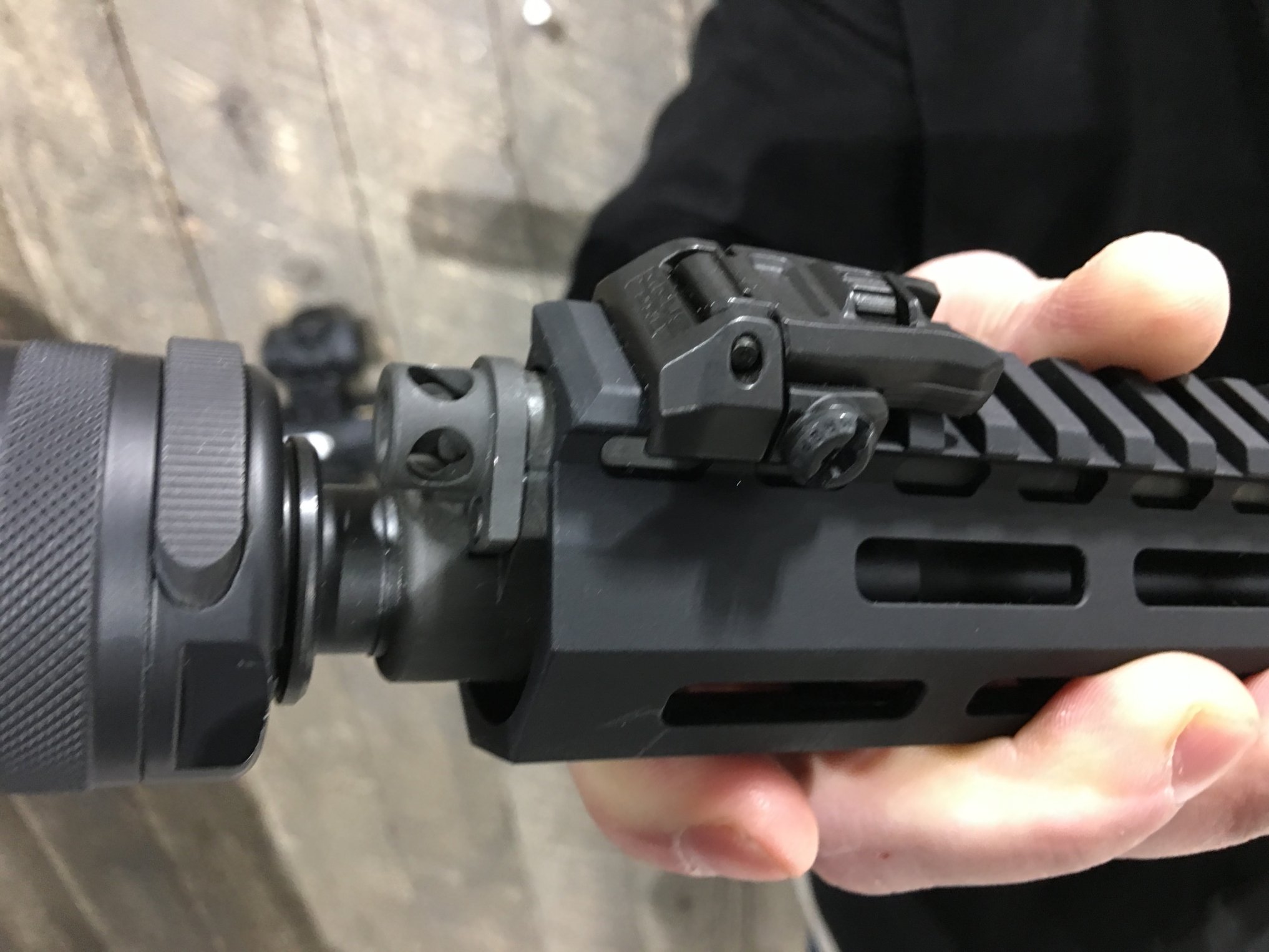