"On Thursday, 21 October 2004, Blackwater hosted its Open House. It was an impressive day and the big announcement was the beginning of the Blackwater Gear line. This week we’re going to take a look at…

most of what that Gear line will encompass, but first I have to clarify something (just for the doubters). I am not on staff at Blackwater. I don’t get a paycheck from Blackwater. I write Frank’s Reviews essentially because I volunteered and Gary agreed. It’s important to understand that anything I say good (or bad) about Blackwater, their Gear line, or anything else pertaining to them, isn’t being said because I’m "toeing the company line." That said, the Blackwater Gear line looks to be impressive and reaches far beyond what I (or some other writers who spoke with me) expected.

Blackwater Gear was born out of the partnership between THREE companies with others acting in support. Blackwater and Michaels’ of Oregon are the best known two out of the three. The other one is Crye Precision (part of Crye Associates but more on that in a bit). That said, who makes what? And based on what input?

Crye Precision manufactures the armor chassis and designed the uniform with its multi-cam (trade marked) pattern. Michael’s of Oregon manufactures the holsters, accessory pouches, modular vest system, etc. It is important to note that Crye Precision designed the accessory pouches and we’ll see full integration of everyone’s role in just a minute. Supporting companies are Benchmade Knives – making Blackwater Gear Knives (the Nimravus line with some minor detail changes that matter) and Armor Skins producing gloves for the Blackwater Gear line. There’s also a company called TerraMar that manufactures the clothing worn under the uniform, and the material that is part of the uniform shirt. There is a hydration system that is integral to the Blackwater Gear line, but I’m not at liberty to say who is manufacturing it. However, I do know that whatever bladder system is used, it’s being carried in pouches designed by Crye, manufactured by Michael’s. So, after all that, what role does Blackwater play?

Last week, in my review about Night-Ops flashlights, I noted that a good company lets the operators tell the engineers what they need, and then the engineers make it happen. This prevents the engineers from limiting the operators in what they can do by providing less than optimal equipment. Blackwater provides the front line feedback and design specifications that are required to insure that the Blackwater Gear serves the warrior first and foremost. Crye designs the equipment based on requirements put forth by Blackwater as a result of feedback from their operators in the arena of combat. Crye and Michael’s both manufacture to the exacting standards Blackwater dictates based on the feedback of those front line combatants. Blackwater Gear as a whole is using its collective brain and the end result is truly unique functional uniforms and equipment platforms. Let’s examine a few pieces in detail.
Before I forget, let me tell you that the BG line will soon be available in Ranger Green, Desert Khaki, and black (for law enforcement) in addition to the multi-cam (shown in all the pictures). It is important to note however, that the multi-cam pattern finished first place in 98% of the multi-environment tests conducted by the US Army’s Future Combat Systems, and in the 2% where it wasn’t in first place, it was in third: Top three 100% ain’t bad. The Crye Associates / Precision products are still part of the testing and evolution of the US Army’s Future Combat Systems. When you look at some of the pictures, it’s easy to see why: do you remember the movie "Universal Soldier"? It kind of reminds me of that – but for real, not science fiction, science-FACT.

Earlier I mentioned that TerraMar makes some of the material used in the uniforms. The (Blackwater Gear hereinafter referred to as BG) uniform shirt can be had one of two ways: with the TerraMar torso and regular uniform shirts sleeves in the multi-cam pattern (shirt tucks in), OR as a full BDU shirt in the multi-cam pattern (shirt hangs out like current BDU). The TerraMar torso tuck-in shirt is an integral part of the heat management system that is incorporated in BG.

With contemporary systems a soldier wears a t-shirt (cotton or polyblend), a BDU shirt, sometimes a field jacket (with or without liner) and then flak jacket / body armor with web gear or LBE over that. When you think about it, that’s…"

Click here to read the rest of this "Blackwater Tactical Weekly" article at the Blackwater USA website.

David Crane started publishing online in 2001. Since that time, governments, military organizations, Special Operators (i.e. professional trigger pullers), agencies, and civilian tactical shooters the world over have come to depend on Defense Review as the authoritative source of news and information on "the latest and greatest" in the field of military defense and tactical technology and hardware, including tactical firearms, ammunition, equipment, gear, and training.
Previous Press Release: New Blackwater Gear™ for Military and Private Military Operators
Next FERFRANS Rate Reduction System (RRS) and Special Weapons for Tactical Operators 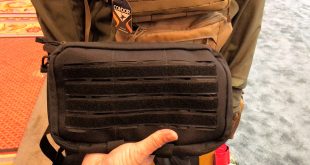