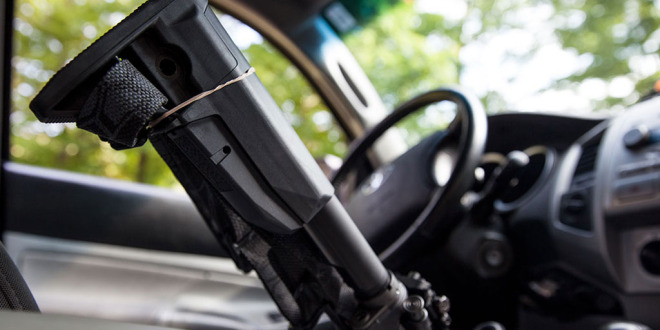 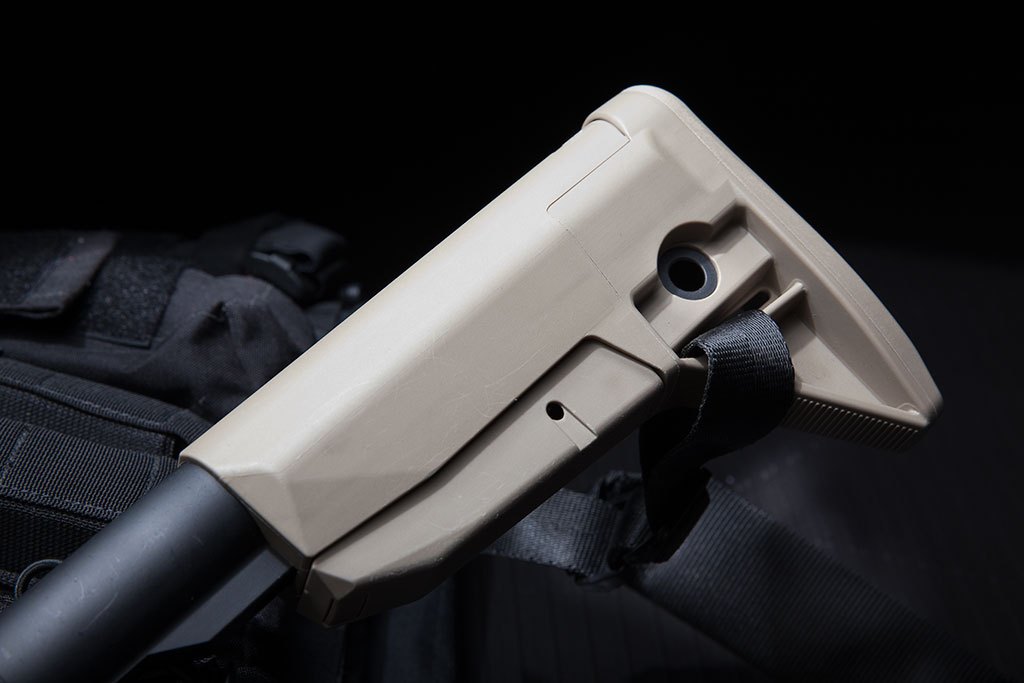 Over the last few years, Bravo Company Manufacturing (BCM) has consistently and repeatedly demonstrated an ability to design, develop and very effectively market great tactical AR (AR-15) rifle/carbine/SBR (Short Barreled Rifle) products that give the end-user some of the best bang for the ballistic buck in the business, and the new BCMGunfighter Stock (GFS) (also written “BCM Gunfighter Stock“) telescoping/retractiable tactical AR buttstock is certainly no exception. In fact, it’s arguably one of BCM’s best examples, and DefenseReview (DR) believes it has the potential to be a real game-changer product in this (bang for the buck) regard, assuming the GFS works as advertised–and we have no reason whatsoever to believe it won’t, given BCM’s rather impressive track record so far.

DR will be acquiring a couple of BCMGunfighter Stock review samples soon for some T&E. In the meantime, though, we’ve interviewed the GFS’ chief designer/engineer, Eric Kincel of Gunfighter Industries, and have come away from that experience very impressed. Those in the tactical firearms industry know Mr. Kincel quite well, since he used to head up new product design and development at Vltor Weapon Systems. Well, he’s now applying his talents to BCM’s products. According to Kincel, his and BCM’s goal was pretty simple in mission. “We wanted the lightest, strongest, best stock out there, but the number-one feature we wanted was [external] smoothness, for the stock to be totally snag free”, combined with an outside-the- box design, of course. 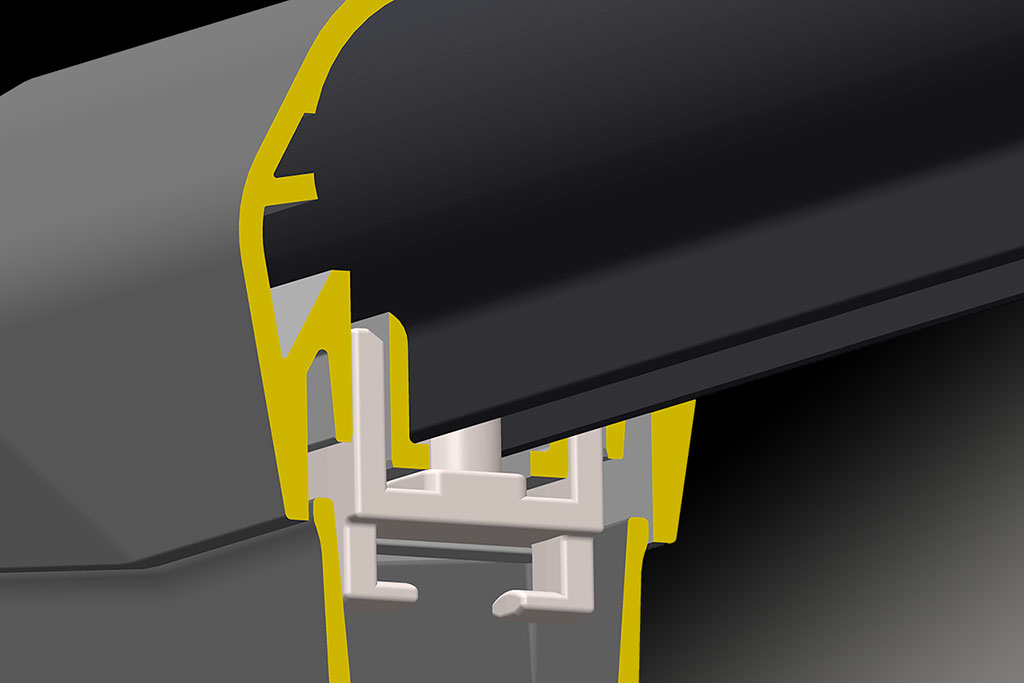 The key to the BCM Gunfighter Stock’s strength is the investment-cast locking latch. Kincel told Defense Review that most stocks fail on the first drop during a 1.5 to 1.7 meter drop test onto concrete with the stock extended, at a standard M4 Carbine weight. The GFS is designed to be able to withstand this test and then some, no problem. In the first/top embedded video below, you can see Kincel drop a GFS-outfitted M4-type tactical AR from a height that would appear to be at least 1.7 meters high (and probably higher), and remain functional. Here’s how it does it: Instead of just having a round pin that can just blow right through the plastic “like a ship going through water”, the GFS’ latch has multiple flat surfaces that spread the energy throughout the whole stock, so the entire stock takes the impact, rather than just the pin. This design apparently makes it more than twice as strong as competing premium aftermarket telescoping/retractable AR buttstocks.

It’s as if BCM designed and developed the BCMGunfighter Stock specfically for Mike Pannone of CTT-Solutions, as Pannone puts great emphasis on the combat/tactical importance of telescoping/retractable buttstock strength, since in military combat environments, you might have to “mortar” your gun to clear a jam. This puts A LOT of pressure on your buttstock’s internals (internal parts), and can easily break them, rendering the stock–and potentially the gun–useless for tactical/combat engagements, which can potentially get you killed. In his tactical carbine course(s), Pannone heavily drills his students in clearing every kind of conceivable weapon malfunction/jam, so the student will have to mortar his/her gun many times during the course. So, DR plans to contact Mr. Pannone to get his take on the GFS as soon as possible. 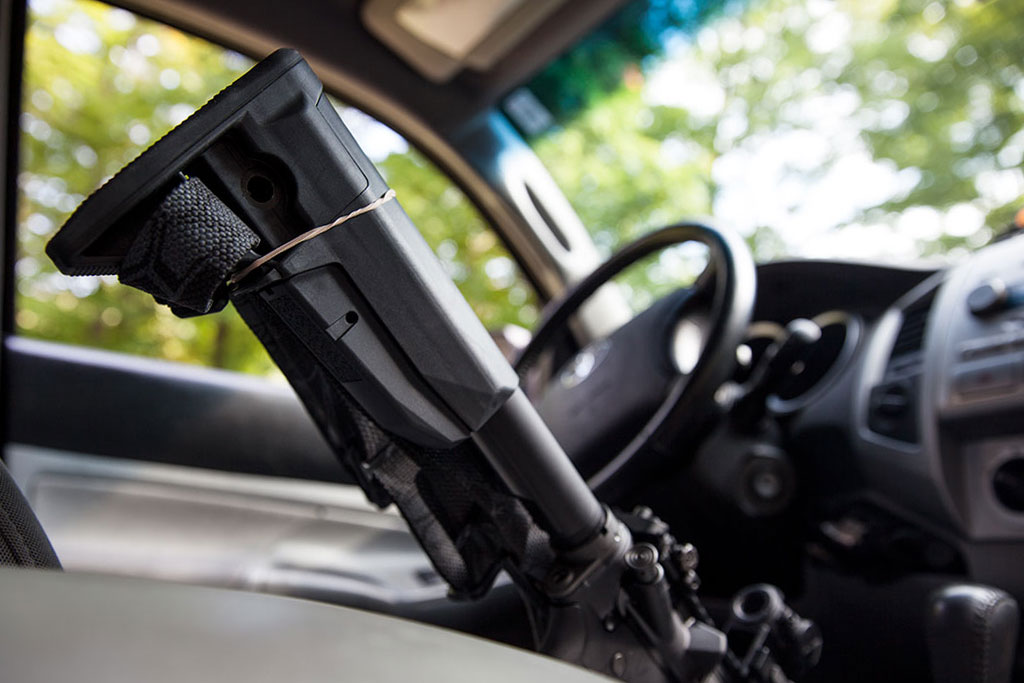 The BCM Gunfighter Stock’s external smoothness/snag-free factor was also a really big deal, particularly for vehicle ops and CQB/CQC (Close Quarters Battle/Close Quarters Combat). So, everything on it was designed with this in mind. The GFS’ paddle is semi-internal. Inside the paddle is the nylon-polymer leaf spring/sub-lever and latch, so there are no sharp edges.
“Originally, I wanted to use an M16 hammer spring, but there wasn’t enough room for it,” said Kincel.

The GFS’ Vehicle-Born Operations Sling Tab (VBOST), or “fin”, is removable for those who don’t need it and want to make their GFS even more snag-free. The VBOST is designed for military SOF (Special Operations Forces) assaulters/operators and military PSD/Security Operators engaged in vehicle ops, allowing them to run their sling under a rubber band in an S-fold configuration. This keeps the tension off the paddle/locking latch.

BCM also wanted the GFS to be highly modular. With this in mind, the stock’s whole rear section is held on with one (strong) screw, and is designed to be removable for modular components in the future, according to end-user preference. 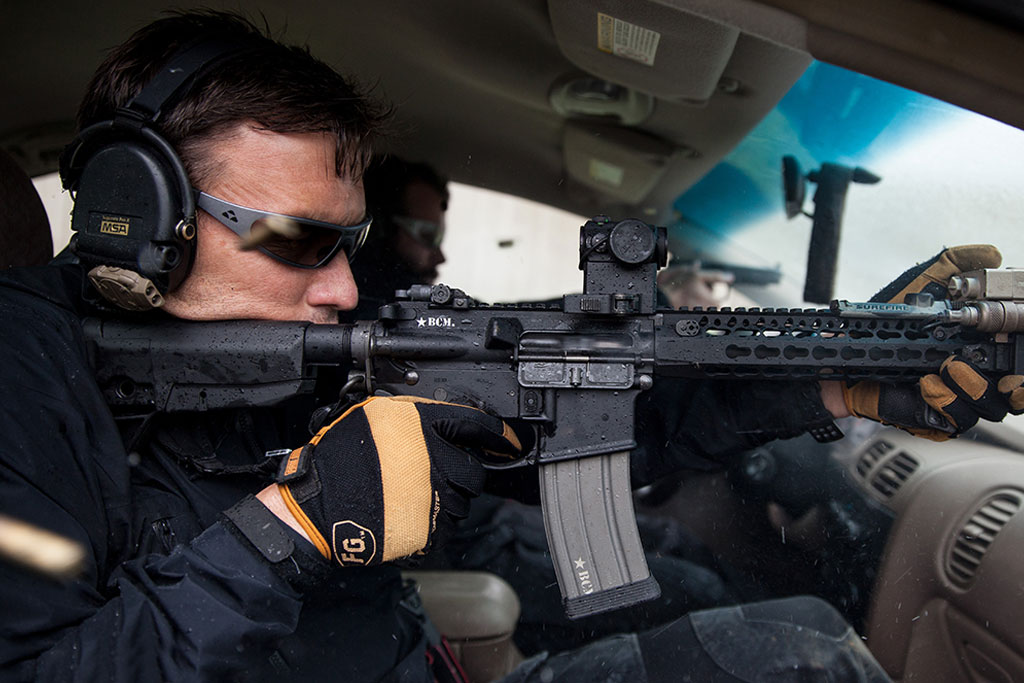 The really crazy thing is that all of this is accomplished in a sub-$100 (USD) stock. In fact, as of this writing, the BCMGunfighter Stock is avaialable for less than $60 USD, or $55.95 USD to be exact! Just mind boggling. “When it comes to a battlefield- ready, retrofittable lightweight, sub-$100 stock, we have the strongest, lightest, most modular one out there,” says Kincel. Knowing him and BCM, we wouldn’t bet against it.

Again, assuming the GFS works as good (or “well”) as it looks, aside from being perfect for tactical AR carbine builds for civilian tactical shooters, it should be pretty fantastic for SBR/PDW (Personal Defense Weapon) and V-SBR (Very Short Barreled Rifle) gun builds for military assaulters/operators and LE SWAT operators. And, its price point and design attributes will effectively make it the Glock of the tactical AR telescoping/retractable buttstock world, as it will out-perform (or at least match) its competitors at a significantly lower price point, and is poised for maximum market penetration with regard to both retail (Mil/LE and commercial) and OEM markets.

DR can’t wait to get its hands on the GFS for testing and evaluation, and we’re particularly interested in DR writer/contributor  Jeff Gurwitch’s hands-on opinion of it. Gurwitch is an active military SOF assaulter and 3-Gun competitive shooter on the Adams Arms Shooting Team in his free time. Basically, if he digs it, it’s good-to-go.

If you’d like to give the BCMGunfighter Stock a whirl, DR recommends you contact the good people at Rainier Arms, since they’ve informed us that they now have it in stock (excuse the pun), although the GFS might not yet be visible on their website. So, give ’em a call or send them an email. 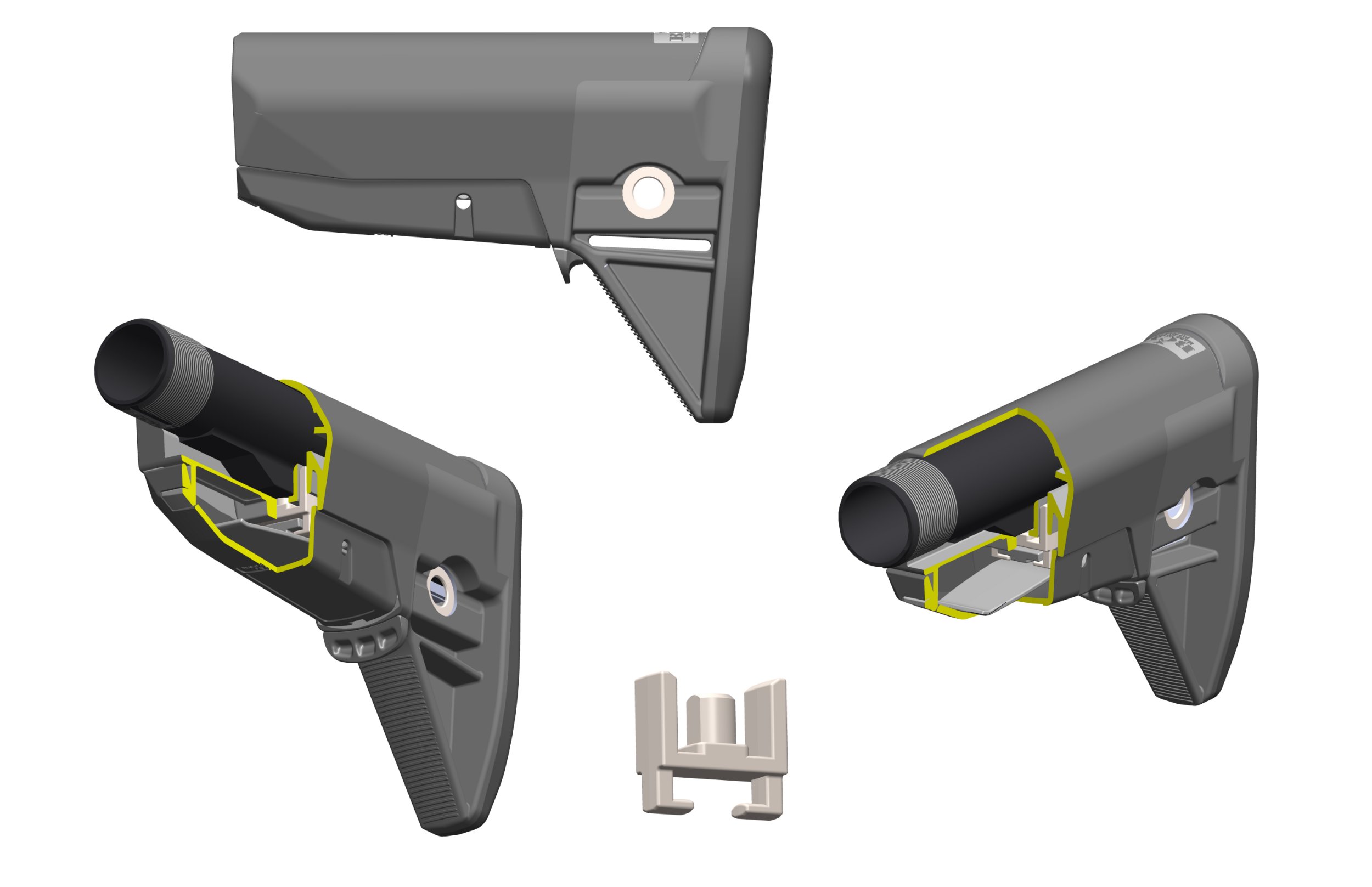 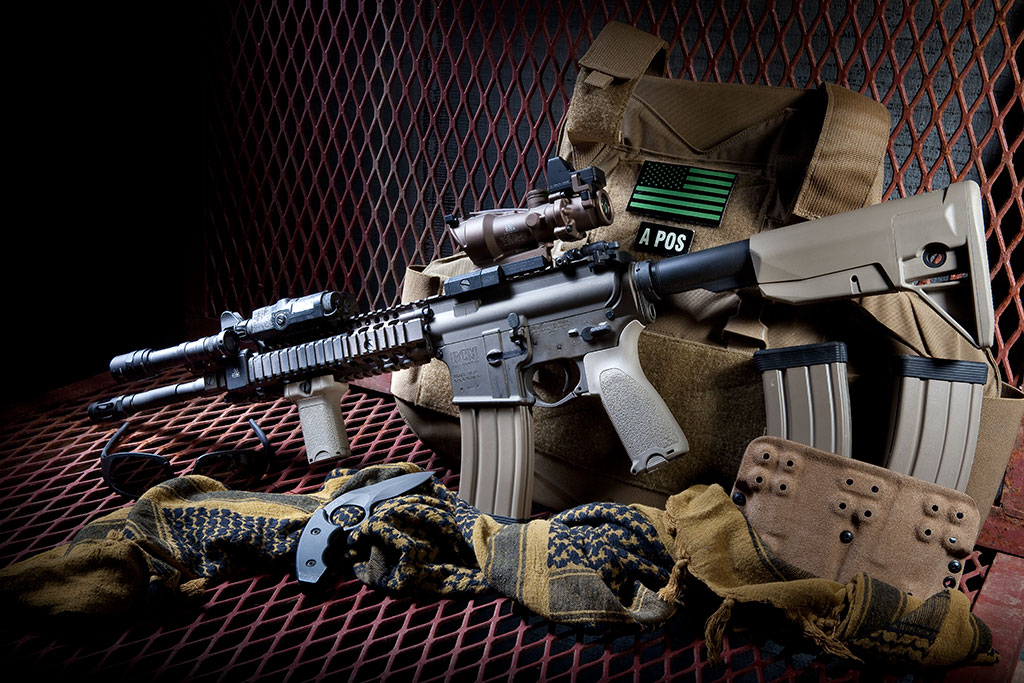 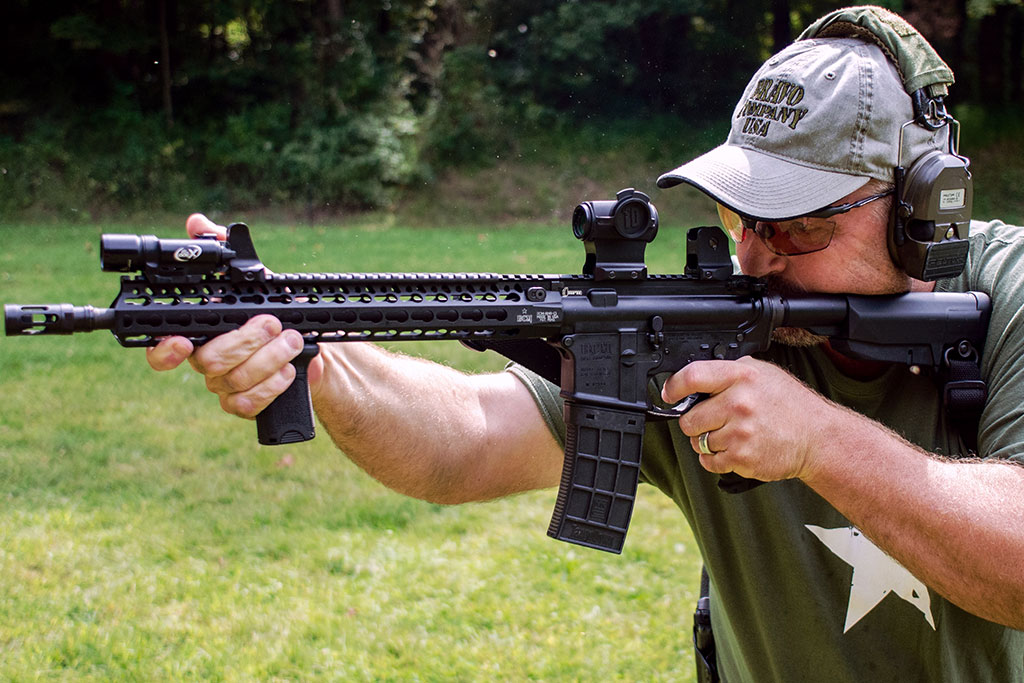 “Over a year in design, development, and testing…

The strongest light-weight polymer stock available for your mil-spec receiver extension is here!

• Snag free Design. No sharp edges prevent tangling of the rifle with the shooter’s sling, molle gear, or other kit.

• Modular VBOST (Vehicle Borne Operations Sling Tab) – This tab interfaces with the shooter’s riggers’ band or bungee to secure the shooter’s sling against the stock when the carbine is not in use. Increasingly, this is the most common application when operating inside a vehicle.