The Swiss firm Brugger & Thomet AG is currently manufacturing and marketing an updated/product-improved version of the Steyr TMP submachine gun (after acquiring the rights to it) called the MP9 Submachine Gun (9x19mm)–not to be confused with its namesake, the Ruger MP9 subgun–under their submachine gun line.  B&T is marketing the MP9 as a submachine gun/PDW (Personal Defense Weapon). Unlike the Steyr TMP, the select-fire B&T MP9 Submachine Gun/PDW incorporates/integrates a side-folding buttstock for added control while firing. B&T had to re-configure the receiver in order to accomplish this.  The addition of a folding buttstock corrects a major flaw of the TMP. The lack of this feature limited the TMP’s application/capabilities envelope.
If utilized with armor-piercing (AP) 9mm ammo like the Bofors 9mm HP/M39B round (in Swedish Army Service, and possibly being manufactured by Nammo of Norway) or Russian 7N31 +P+ 65-grain exposed-steel-core round, the B&T MP9 subgun/PDW may be able to… 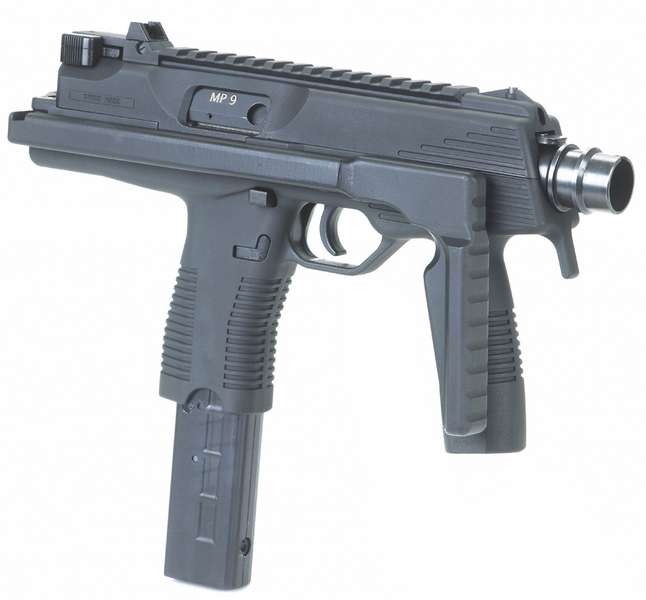 defeat NATO CRISAT armor within limited distances, but this is just speculation at this point. It’s been reported that the B&T MP9 runs totally reliably (i.e. functions totally reliably) with ammunition from a "vast array of manufacturers", including the aforementioned M39B round.

The B&T MP9 PDW/Submachine Gun is recoil-operated and fires from the closed-bolt position.  It utilizes a rotating barrel locking system.  The MP9’s receiver is made from a high-strength polymer that’s not only impervious to rust/corrosion from saltwater, but also to damage from solvents/cleaning agents.

By the way, Brugger & Thomet AG has created an entire website specifically for the B&T MP9 Submachine Gun.

The B&T MP9 joins other recently designed/developed subgun/PDWs like the Saab Bofors Dynamics CBJ-MS Personal Defense Weapon (PDW), accept the CBJ-MS PDW has the additional advantages of being multi-caliber and storing an additional loaded magazine in its (slanted) vertical foregrip. Saab Bofors Dynamics has developed a special high-velocity armor-piercing 6.5x25mm CBJ cartridge (2,689.5 FPS) specfically for the CBJ-MS PDW/subgun. The 6.5x25mm CBJ round is reportedly a saboted round utilizing either a tungsten or tungsten-cored bullet. This specialized AP round reportedly has the same overall dimensions and firing impulse/felt recoil of 9x19mm ammo that can penetrate NATO CRISAT body armor. It’s DefenseReview’s understanding that all you have to do to convert the CBJ-MS over from 9mm to 6.5mm is change the barrel out.
Click here for more detailed information on the CBJ-MS PDW/submachine gun. 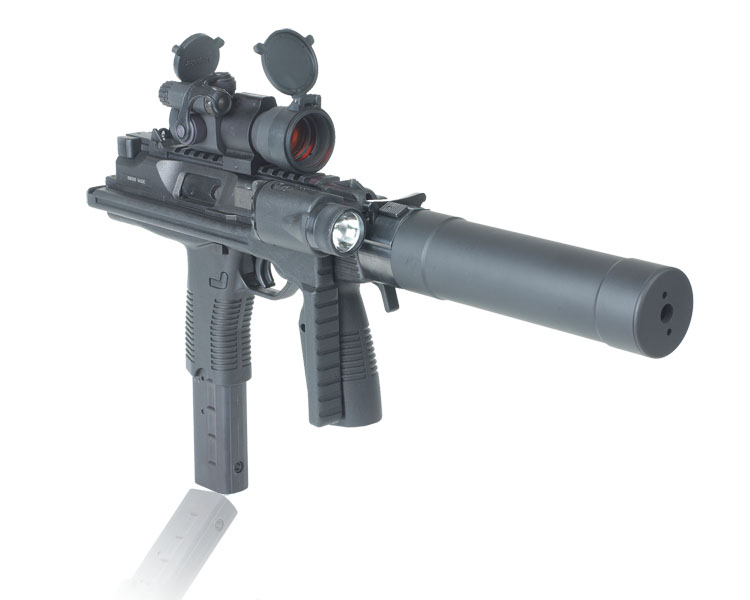 B&T might want to consider doing a deal with Saab Bofors Dynamics where they’re allowed to use SBD’s proprietary 6.5mm AP round, and then making the MP9 subgun/PDW convertable to 6.5x25mm, just like the SBD CBM-MS. Just an idea.

Brugger & Thomet AG (B&T) makes a semi-auto-only version of the MP9 called the B&T TP9. They also make a force-on-force training version that fires Simunition® Fx® marking cartridges called the B&T MP9-FX, and an inert training weapon version called the B&T MP9-M (The "M" is for "manipulation".). B&T is basically a one-stop shop for tactical operators, in that they make a host of accoutrements and accessories for all the weapons they manufacture, including sound suppressors/silencers, tactical handguards, mounting systems, and tactical accessories.

The B&T MP9’s receiver can be molded in a variety of colors, including your basic tactical black, olive drab (O.D. Green), desert tan, and arctic white.  DefenseReview doesn’t know whether or not any camo color schemes will be available in the future.

Brugger & Thomet AG can be contacted by phone at +41 (0)33 334 67 00. Ask for Karl Brügger or Heinrich Thomet.  In the meantime, if you want to contact them by email, you can contact someone named Annette at [email protected], who may be a media contact.
You can contact Saab Bofors Dynamics (SBD) by phone at +46 8 463 00 00.
Click here to visit the "Modern Firearms & Ammunition" page on the B&T MP9, which contains some additional info on the new subgun/PDW.
If you enjoyed this article and would like to become a member of DefenseReview.com, you can sign up here. 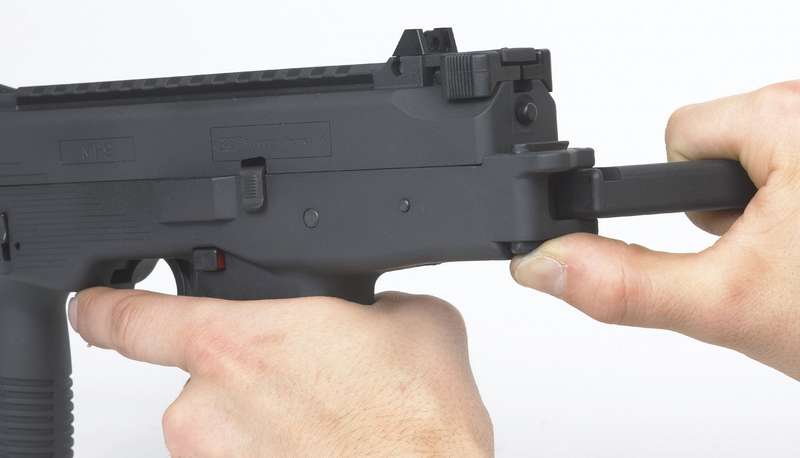 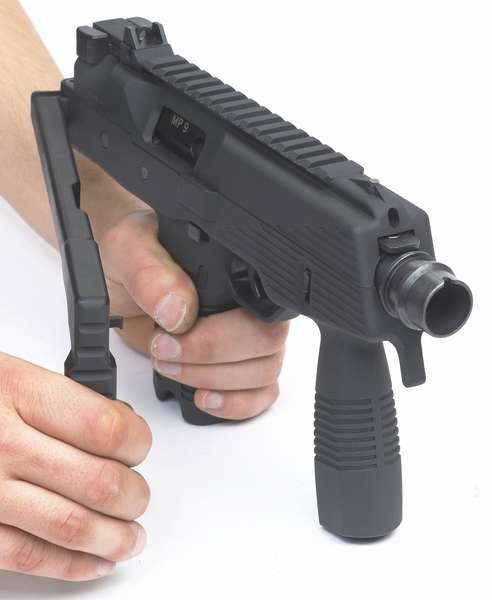 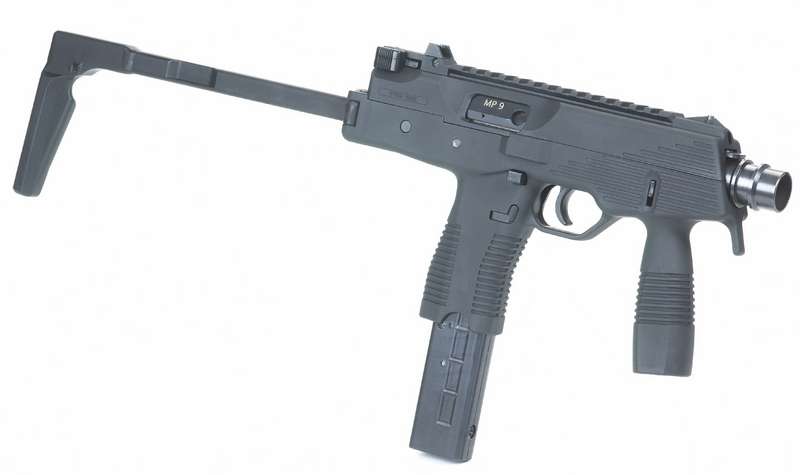 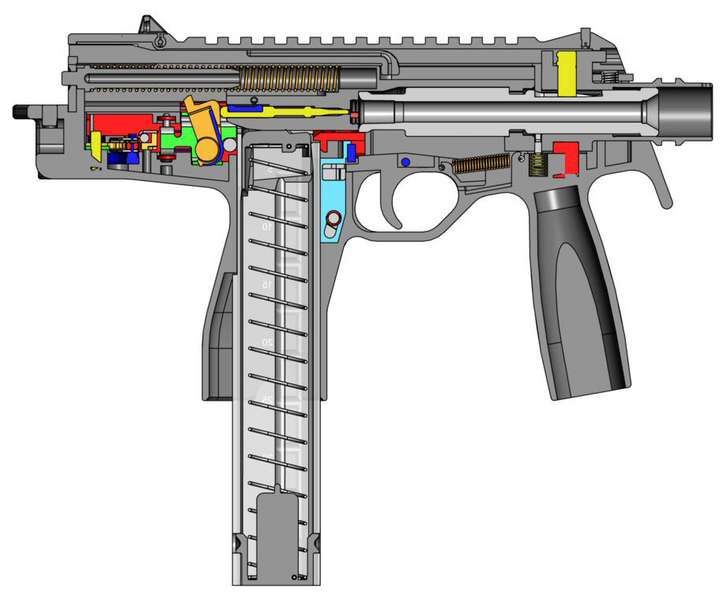 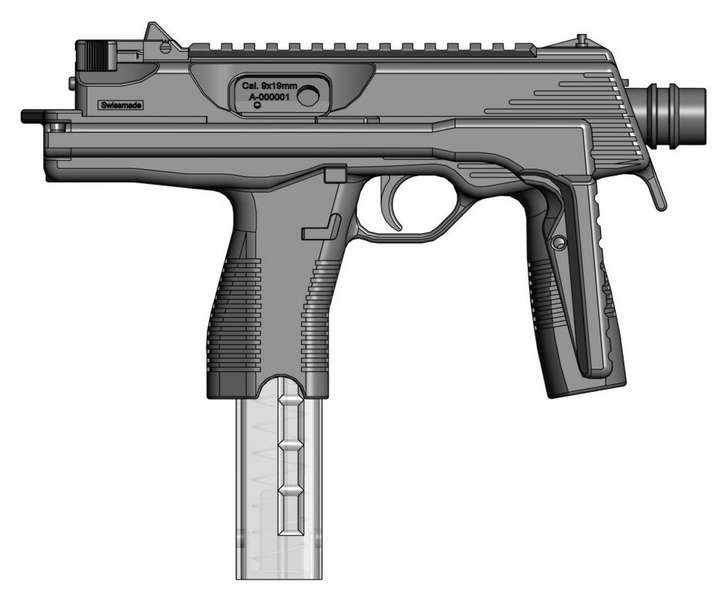 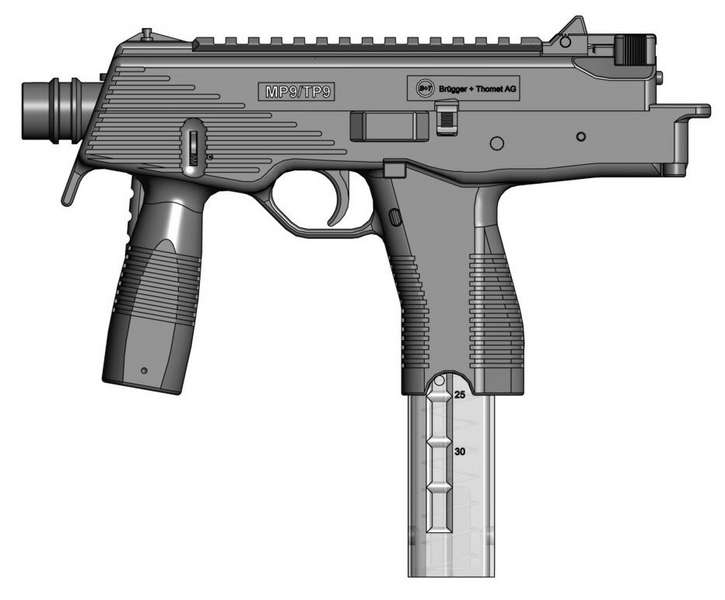 David Crane started publishing online in 2001. Since that time, governments, military organizations, Special Operators (i.e. professional trigger pullers), agencies, and civilian tactical shooters the world over have come to depend on Defense Review as the authoritative source of news and information on "the latest and greatest" in the field of military defense and tactical technology and hardware, including tactical firearms, ammunition, equipment, gear, and training.
Previous Underwater Detection and Disruption Tech Being Developed To Combat Al Qaeda
Next Request for Charitable Donations for Rebuilding Efforts in Iraq