All of the photos contained in this article, with the exception of the first/top photo, were taken by Chen Lee a.k.a. "SMGLee" at the 2008 AUSA Annual Meeting and Exhibition, and he owns the copyright on these photos. Colt Defense, LLC provided the first/top photo.

While I was visiting with Colt Defense personnel at Colt headquarters, one of the weapons they showed me and allowed me to test-fire was a 10.3"-barreled M4 CQBR/PDW-type 5.56x45mm NATO (5.56mm NATO) /.223 Rem. select-fire SBR/subcarbine called the Colt Sub-Compact Weapon a.k.a. Colt SCW (or, as I like to call it–and the Colt APC, both–the "HK416 Killer", or just "416 Killer" for short). The SCW is designed specifically for CQB/CQC in confined spaces like buildings and small dwellings in urban warfare environments, vehicle deployment during security operations (i.e. PSD ops), and any other operation where a compact 5.56 weapon is the optimal solution, while still allowing the operator to effectively engage medium-range targets, as required. In addition to the shorty barrel, the SCW sports an interesting and unique side-folding/telescoping a.k.a. folding/collapsible buttstock that reduces overal (OA) weapon length even further during transport. This makes the SCW the most compact of all of Colt Defense’s shoulder weapons/long guns.

The end-user can choose from three different operating systems:…

1) An Upgraded Direct Gas Impingement System, which incorporates Colt’s proprietary gas regulator sleeve a.k.a. gas impingement sleeve (patent pending) that fits into the front sight and is designed to eliminate the negative effects of gas port erosion on cyclic rate/ROF over the life cycle of the weapon system while simultaneously increasing weapon reliability
and durability.

2) The Colt Piston System (CPS), which is a gas piston/op-rod-driven system that was originally designed and developed specifically for the new Colt Advanced Piston Carbine (APC), which DefenseReview will be covering later. The Colt Piston System seemingly capitalizes on the lessons learned from the Colt M5 and Colt LE1020 projects, and uniquely utilizes an articulating-link piston (ALP) system that’s designed to reduce operating stresses on crtical weapon components, and thus solve a problem that is inherent in competing piston-driven systems like the HK416 (HK 416), LWRC M6A2, etc. The Colt articulating link piston operating system is also supposed to increase the weapon’s accuracy and ease piston/op-rod removal for weapon cleaning and maintenance. During my visit and firing session, I asked Phil Hinckley, Executive Director of Quality and Engineering at Colt Defense LLC, if the Colt Piston System is "bulletproof", i.e. perfected and totally reliable under adverse conditions and high round count, and Mr. Hinckley assured me that it was. 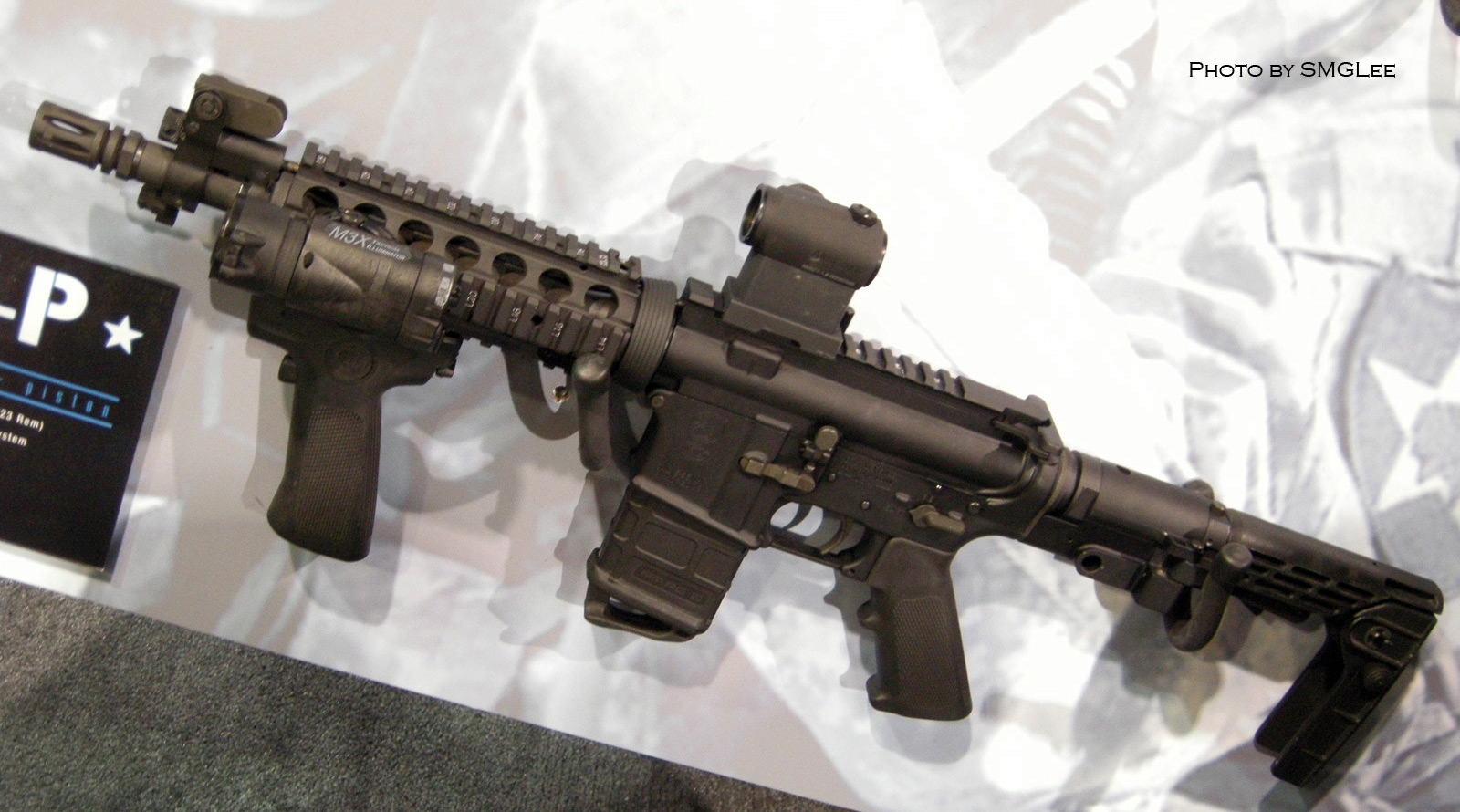 3) The Colt Advanced Hybrid System (AHS), which is perhaps the most interesting and fascinating system, for it combines Colt’s upgraded direct-gas-impingement system with its advanced piston operating system. It’s DefenseReview’s understanding at present that the Advanced Hybrid System, originally designed and developed for the Colt Advanced Hybrid Carbine (AHC), utilizes both the aforementioned gas regulator sleeve in the upgraded/product-improved direct-gas-impingement (DGI) portion of the system and the articulating link piston on the piston portion of the system. We’ll try to get verification on this point.

The end-user also has receiver configuration and barrel choices. He can have Colt’s patented Mil-Std-1913 "Picatinny" monolithic upper receiver or a standard Mil-Std-1913 flat-top upper receiver with separate handguard (quad) rail system/forend rail tube.  He can also choose between a button-rifled or cold-hammer-forged barrel, either of which can exceed 15,000 rounds before replacement. 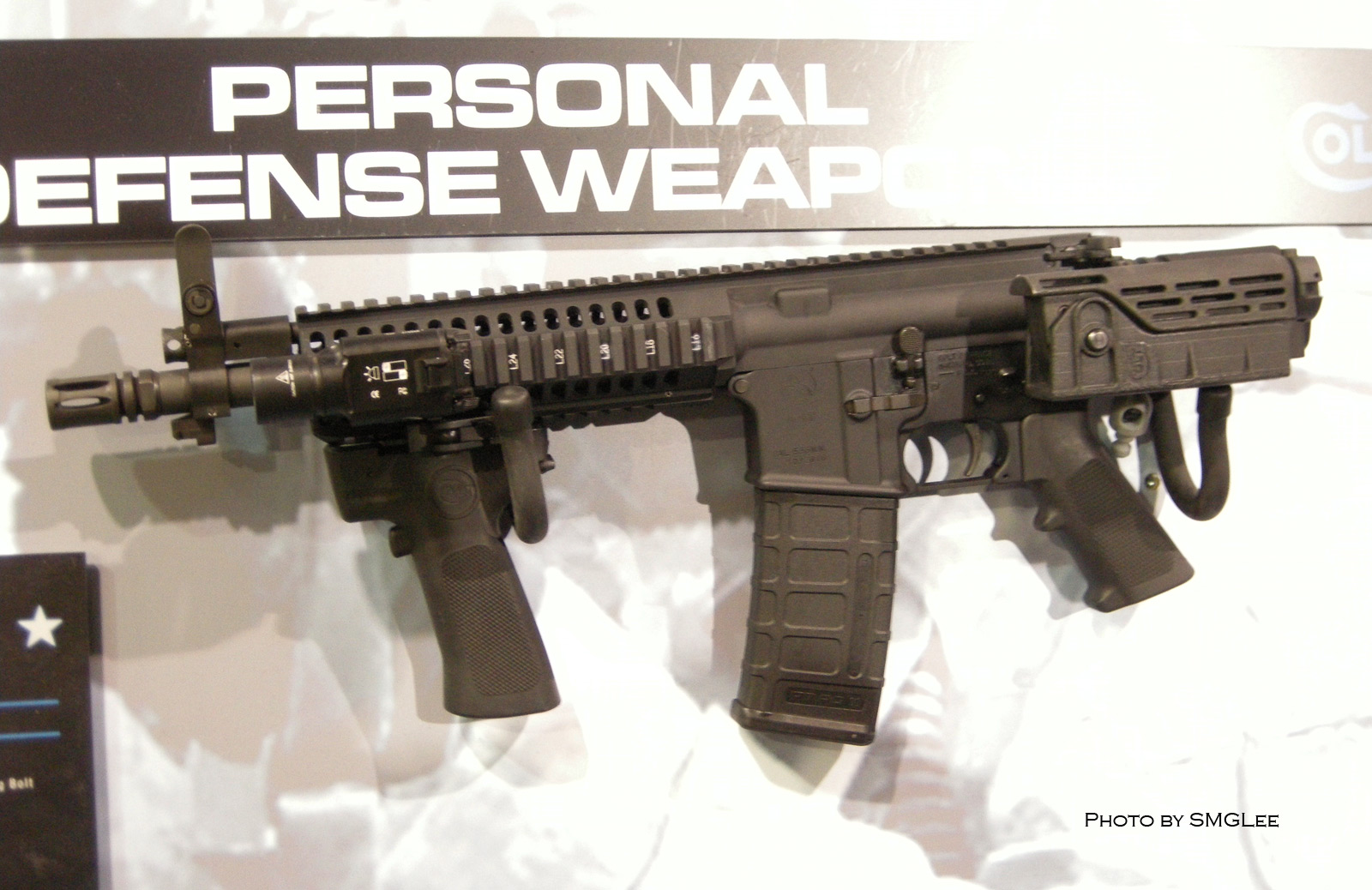 – "Bolt Carrier Buffer System" that attenuates/mitigates recoil and barrel climb and thus improves full-auto controllability and results in more hits on target. I could go into more detail about how this feature works, but I won’t until and unless I receive clearance from Colt Defense. Let’s just say that components of this buffer system have been tested in excess of 36,000 rounds on multiple units, and the system allows for a shorter receiver extension tube (3.25" long) that allows the utilization of a folding/telescoping a.k.a. folding/collapsible buttstock.

– New "Pivot Forward" Extractor that improves grip on the cartridge case during hard extraction, particularly during full-auto fire.  This is a crucial and welcome component, for all AR-based carbines and subcarbines in the U.S. military inventory, including the Colt M4 Carbine, M4A1 Carbine, Colt M4 Commando (11.5") and Colt-based M4 CQBR (10.5"). 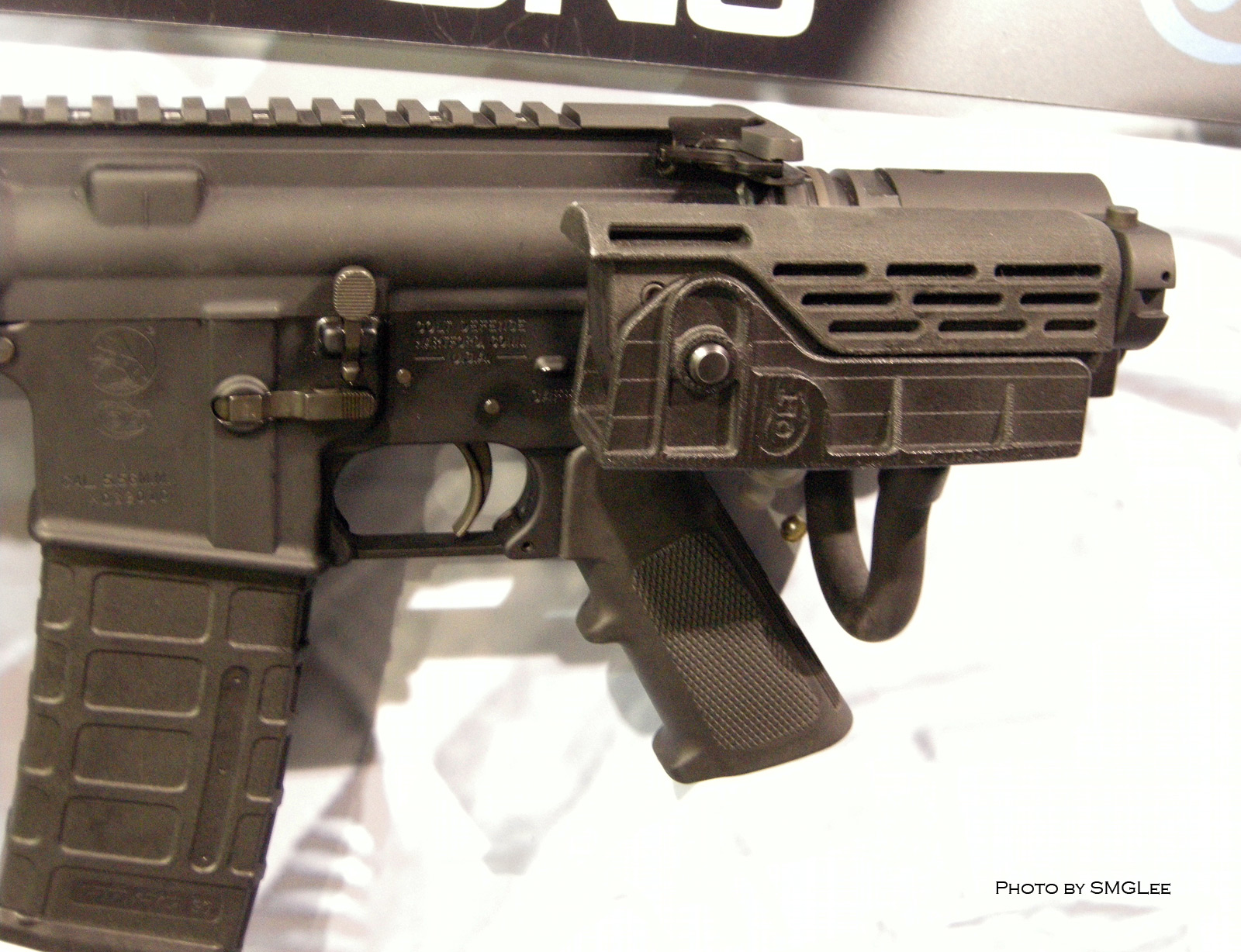 – Side-Folding/Telescoping Quick-Detach Buttstock Assembly, which is pretty slick. I examined and utilized this component during my visit, which included a firing session.

– Optional Titanium Folding Front Sight/BUIS that, due to it’s lightweight (or, at least, lighter-weight) nature, reduces weight on the barrel and thus increases accuracy and zero retention.

– Multi-Functional Holster, Sling and Magazine/Accessory Pouch that "provides the user rapid access to weapon from seated, standing or prone position."

As I alluded to at the beginning of this piece, I got to test-fire the SCW among several other Colt Defense weapons, but while I got to test it on full-auto, I was only able to put a few magazines through it. I didn’t get to run the SCW through the proverbial ringer under adverse conditions and high round count like the U.S. military inevitably will. I was able to control the weapon on full-auto, although it had a higher cyclic rate/ROF than the FERFRANS Specialties SOAR 10.5" SBRs (DGI and gas piston). I’d have to run the Colt SCW and FERFRANS SOAR 10.5" SBRs side by side to see which allowed more hits on target while firing full-auto strings. 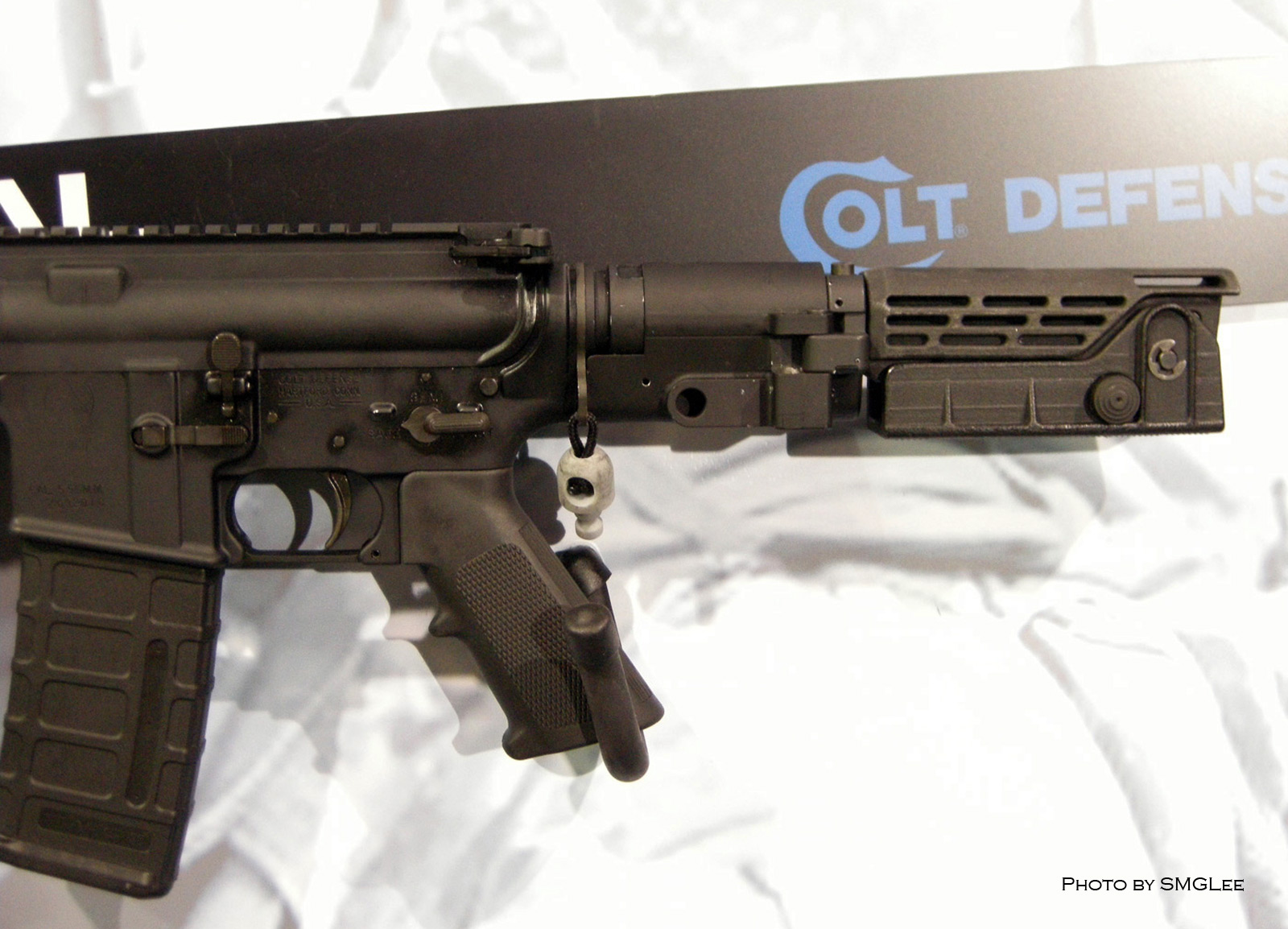 It would be interesting to see how Colt Defense’s various select-fire/full-auto military offerings, including the SCW, would perform if they integrated FERFRANS Specialties’ patented Rate Reduction System (RRS), as it would simultaneously make all the weapons more controllable on full-auto (increasing hits on target) and enhance reliability, durability and weapon longevity by reducing heat and stress on crucial weapon components. Understand that the RRS operates outside of the weapon’s gas system. So, while the RRS reduces cyclic rate/ROF to the sub-700 RPM range (approx. 625-675 RPM), according to Ferdie Sy, President/CEO of FERFRANS Specialties, the RRS does not reduce weapon reliability in the slightest.

Without shooting the weapons side by side, and just going on memory, I’d have to give the FERFRANS SBRs the edge over the Colt SBRs (10.3" and 11.5" barrels) for hits on target during full-auto fire, due to their (SOAR SBRs) employment of the RRS. In my opinion, the FERFRANS RRS would give Colt 5.56mm weapons an even greater edge over their competitors in the military and law enforcement arenas.

As it stands, however, the Colt SCW (Sub-Compact Weapon) provides the end-user with an unprecedented and perhaps even unmatchable amount of options in a subcompact 5.56mm tactical AR weapon system, particularly with regard to operating systems and upper receiver configurations, before you even get to the folding/telescoping buttstock, barrel options, and plethora of available features.  It’s a really sweet little package, and is going to be tough for Colt’s competitors to beat–real tough–provided it lives up to the hype.  I mean, if it does, who needs a 416 (HK 416), now?

And, the kicker is, the Colt SCW will be made right here in America by Americans who work for an old and historic American company, not a German company.  America first.

Author’s Note: DefenseReview is interested to see how the Colt SCW performs with 70-77gr 5.56mm ammo out to medium distance (300-500 yards) with regard to accuracy and terminal ballistics.  It would also be interesting to see how a 6.8x43mm SPC (a.k.a. 6.8mm SPC a.k.a. 6.8 SPC) version of the SCW might perform against soft and hard targets at CQB/CQC and medium ranges.


Acronyms and Abbreviations used in this article: 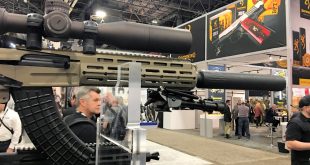