As a long time black rifle enthusiast, I’ve bought and tried out many AR-15 related products for my own consumption. With the recently increased interest in the AR-15 rifle/carbine platform, dozens of “accessory” companies have sprouted. Anyone that’s into quality knows that a good chunk of these items on the market are junk, but thankfully there are companies still making top notch, innovative products. Daniel Defense is one such company that has been continually putting out top notch, innovative products. Their LITE rail and Omega-X rail are two of the best systems I’ve experienced to date.

Both rails use the same barrel nut which started its life in the LITE rail system. This barrel nut is one of the best features of these rail systems because the steel barrel nut doesn’t require any sort of indexing for the gas tube. In the case of the LITE rail, you install the bolt-up plate and barrel, then just torque the barrel nut down to spec (Daniel Defense recommends 50-75ft/lbs). You then bolt together the one-piece rail to the bolt-up plate using six bolts for a solid lock-up. This method of attachment also allows you to finely tune the handguard’s top rail to the top rail of the upper receiver and once done, it gives the whole rifle a nice uniform look with no huge gap between the upper and the handguard.

With the Omega-X rail, you torque on the barrel nut (same 50-75ft/lbs. recommendation) and then you assemble the two-piece rail around the barrel nut. Once that’s done, you align the top rail and then tighten down the four set screws just like the original Omega rail. The Omega-X rail is more streamlined compared to the LITE rail due to the lack of a bolt-up plate and the Omega-X rail also has machined in QD swivel mount holes towards the back of the rail. Personally, I attach the front of my two-point Vickers Combat Sling (a.k.a. Vickers Combat Applications Sling a.k.a. Vickers Tactical Sling) to the front of my rails, so I use the Daniel Defense Rail Mount QD Swivel Attachment Point (RM-QD-SAP). It would be nice to have a QD (Quick-Detach) point built into the front of the rail too.

Now, even though they “look” like a monolithic rail system, they’re not.  So, I still would not span a scope between the upper receiver rail and the handguard rail. If you need to move your optics forward (like in the case of excellent Schmidt & Bender Short Dot Scope with its very generous eye relief), I recommending using a cantilever type scope mount like the LaRue Tactical SPR/M4 Scope Mount (LT-104) or the American Defense Manufacturing Recon-X Scope Mount.

Other great features of the LITE and Omega-X rail are their light weight and profile. The rails are two of the lightest on the market when you compare them to other rail systems, including all of the components needed to install the competition’s rail systems.  So, when comparing them to rails that use the factory barrel nut, you have to add the weight of the factory barrel nut in the total weight calculation which nearly all of the manufactures leave out in their specs.

The LITE and Omega-X also have some of the best profiles on the market. Both are narrow which feels “correct” in the hand and when you add protective rail panels a.k.a. rail covers (such as the Knight’s Armament panels, the Magpul XTM panels or the Tango Down SCAR panels), they feel more like the Colt M4 Carbine handguards. Rails that have “round” profiles (such as ones by Midwest Industries, Troy Industries, Samson Manufacturing, etc.) become too wide which feels like you’re holding a Colt M4 Carbine handguard sideways. I suppose if you have large hands, this may not be an issue but I still think the final overall “shape” is better when it’s an upright oval, not a sideways oval. This also applies if you add a vertical fore grip. When you hold it with your thumb up on the handguard, I’d rather have my thumb as vertical as possible as opposed to have it stretched outward.

Now, what could Daniel Defense do to improve the rails? Outside of the different location of the sling mount hole on the Omega-X that I mentioned previously, the only other thing I could think of is a design feature that Daniel Defense already incorporates in their RIS II rail. The RIS II has two small tabs built into the bolt-up plate. This really limits the amount of clocking in the unlikely event that the rail comes loose. The LITE rails do have this feature of sorts via the bolts, but the tabs would restrict the movement even more. In both cases, the rails would also stop against the gas tube. Of course, this is a very minor issue as I’ve never had, nor heard of, a LITE/Omega/Omega-X rail coming loose.

At the end of the day, many of the rail systems out there can “git ‘er done” but if you’re looking for a rail system with lots of great features, the Daniel Defense LITE or Omega rail system is the way to go.

David Crane started publishing online in 2001. Since that time, governments, military organizations, Special Operators (i.e. professional trigger pullers), agencies, and civilian tactical shooters the world over have come to depend on Defense Review as the authoritative source of news and information on "the latest and greatest" in the field of military defense and tactical technology and hardware, including tactical firearms, ammunition, equipment, gear, and training.
Previous FN FNP-45 High-Capacity .45ACP Semi-Auto Combat Pistol: Where does it fit in the tactical .45 pistol race?
Next U.S. Senator John Thune Thune (South Dakota) Offers Concealed Carry (CCW) Amendment to Federal Defense Authorization Bill 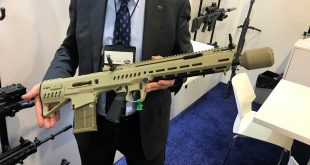