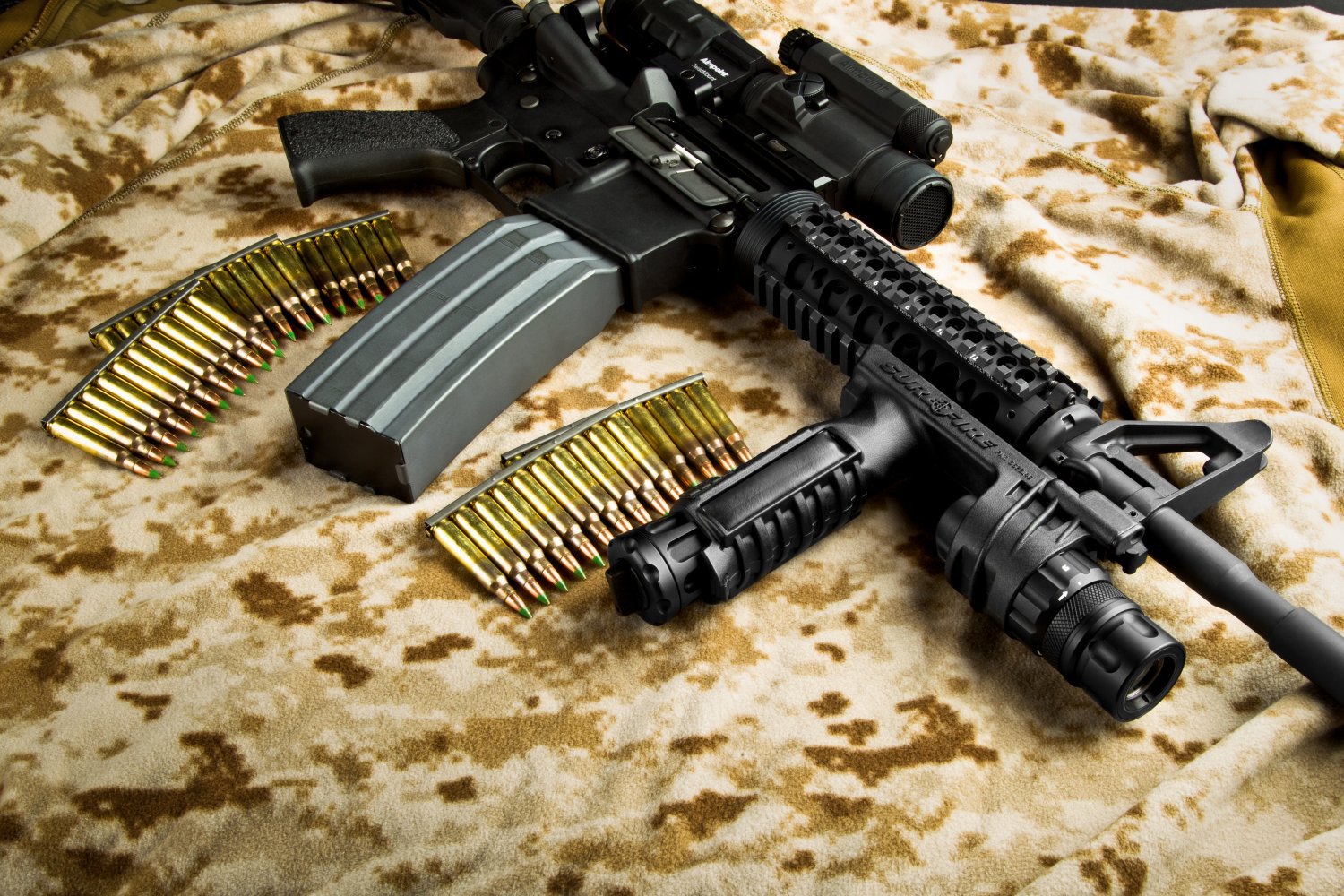 The SureFire HCMs, currently available at Brownells (9/25/13), are the result of a previously-secret program run by SureFire in (invaluable) partnership with the dynamic duo of Jim Sullivan (L. James Sullivan) and Bob Waterfield of ArmWest, Inc. Mr. Sullivan is a pretty lengendary figure in the military infantry small arms design and development field. He's essentially the modern day equivalent of a John Browning or Hiram Maxim. For example, Sullivan co-designed and developed the Armalite AR-15/M16 (M16A1) rifle, the original 20-round 5.56mm box magazine (4179 STANAG), and the 55-grain M193 5.56x45mm NATO (5.56mm NATO) cartridge. He's also designed and developed a number of other well-known and successful military infantry and tactical firearms, since then. Sullivan and Waterfield designed and developed the ST Kinetics Ultimax 100 LMG/SAW/IAR and it's proprietary (and reliable) 100-round drum magazine for the Singaporese Army, in the late 1970s. Sullivan and Waterfield are masters at their craft, and probably the best and most experienced infantry small arms/tactical firearms design and development team in the world. Surefire made a very wise decision in strategically teaming with ArmWest, and they deserve tremendous credit just for that. It says a lot about the intelligence and forward thinking of SureFire's leadership (Dr. John Matthews). 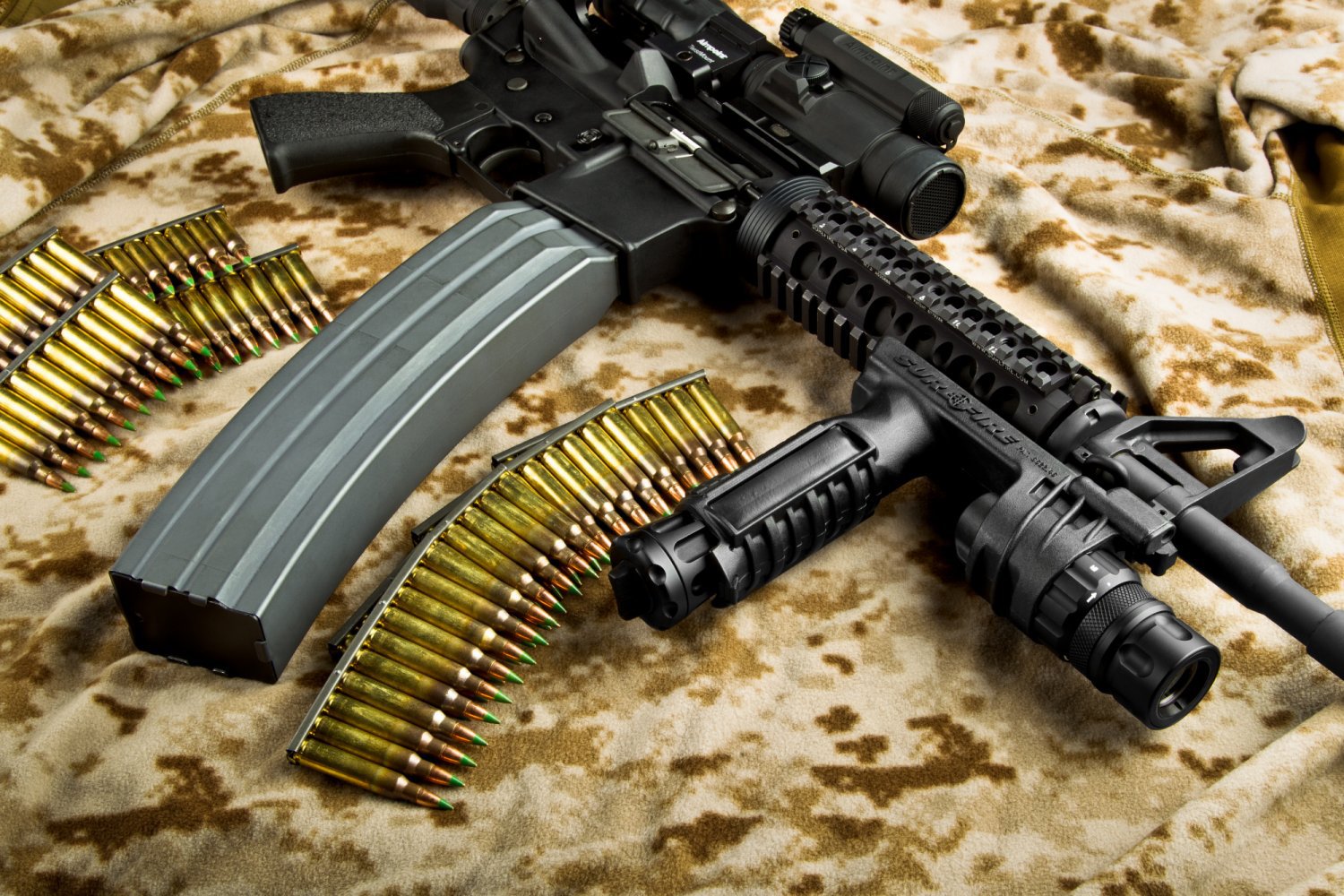 Anyway, the SureFire High Capacity Magazines have the potential to be real game-changers by providing significantly increased immediate firepower to U.S. infantry warfighters, particularly for dynamic, high-round-count full-auto engagements, thereby increasing their chances of survival in combat. “Our men and women fighting overseas are engaged in an evolving battle where needs are constantly changing,” said SureFire Chief Administrative Officer, Joel Smith. “The threat comes from every direction and often by surprise. These high-capacity magazines will make our soldiers better prepared for the next evolution of defense [defensive] tactics.“ SureFire's Marketing Director, Derek McDonald, has reportedly referred to the new high-cap mags as "anti-ambush" mags, although DR prefers the term "counter-ambush", since it sounds better, and is the traditional term. If you find yourself in an ambush, God forbid, you obviously want as much immediate firepower on-hand as possible, as the outcome of the fight can be decided in 30 seconds or less.

In battle, it takes the average soldier 4 seconds to reload their weapon and reacquire a target; time that could be spent engaging threat targets. At best, 30-round magazines allow an individual soldier to fire no more than 150 rounds in 30 seconds.* 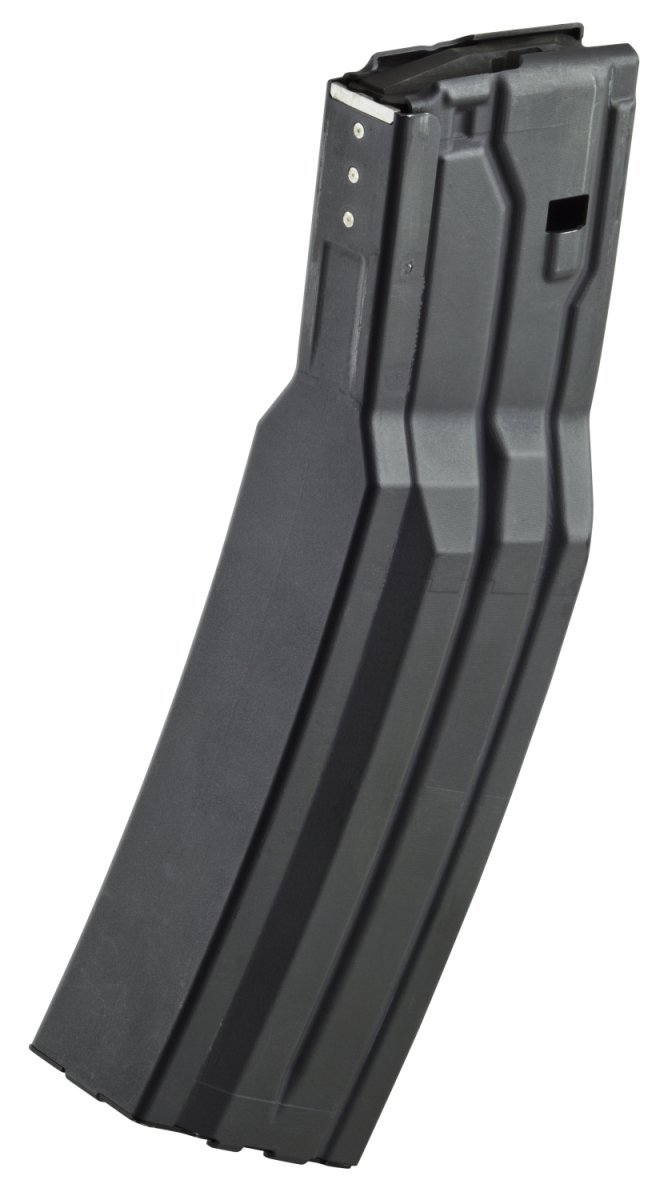 SureFire's 60-Round Magazine increases that figure to 240 rounds. And its 100-Round Magazine: 293 rounds. This magazine is also meant to increase the effectiveness of group that intends to give full-auto firepower to their operators.

In addition to enabling the warfighter to dramatically increase his full-auto and semi-auto firepower-per-minute (FPM) capability, the SureFire HCMs' 4×2 "quad-stack" configuration and other special design aspects allow them to be stored indefinitely while fully-loaded, since they won't take a spring set. This means that they can be pre-loaded to full capacity at the factory (either at Surefire or any of the various ammo manufacturers) and stored as long as the military ball powder and environmental conditions will safely allow, before they can be supplied to infantry warfighters/soldiers on the battlefield. The goal is for infantry warfighters/soldiers to be able to pull fully-loaded/pre-loaded Surefire HCM's out of the crates, load one into the weapon (probably the 60-shot version), load some spare mags into their mag pouches, and go fight. When the mags are used up, the warfighter can either discard them (thus the "expendable", aspect) or save, reload, and re-use them, just like with any 30-round MILSPEC USGI AR-15/M16/M4/M4A1 mag. 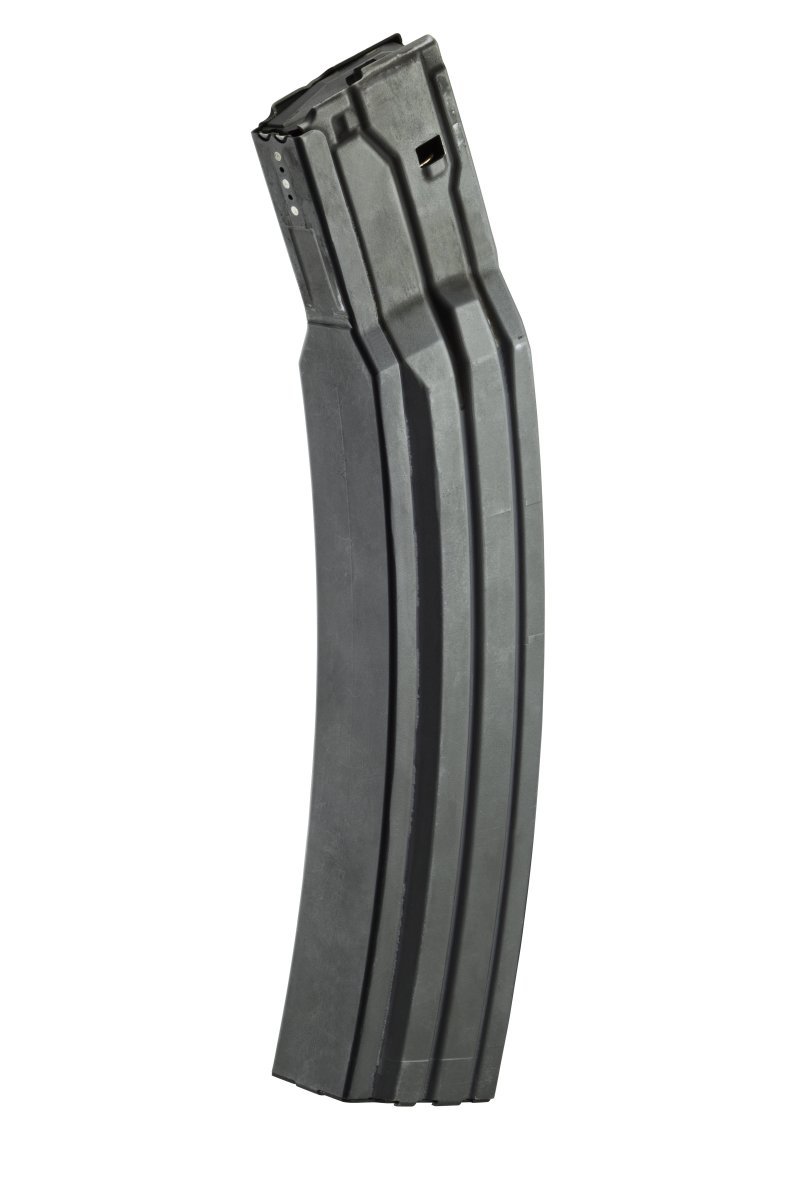 It would seem logical that the SureFire MAG5-60 60-rounder is likely to be the most popular HCM mag with assault rifle/carbine-armed infantry riflemen and IAR (Infantry Automatic Rifle) gunners. However, the SureFire MAG5-100 HCM could potentially find favor with IAR guners, where an ultra-high-level of immediate firepower may be welcome. Both mags would appear to be well-suited to the IAR role, and may assist mag-fed IAR-type weapons in supplanting the belt-fed FN M249 SAW for a number of infantry combat applications.

Regardless, the 60-rounder doubles the warfigher's immediate firepower with a fairly reasonable size and weight deficit (approx. 1 lb) versus a standard 30-round USGI mag. The 60-shot MAG5-60 weighs 2.02 lbs fully loaded, which is about 8 ounces (8 oz) less than two (2) 30-round mags clipped together with a Redi-Mag, according to Mr. McDonald. In fact, the additional weight of the fully-loaded HCMs should logically aid both semi-auto and full-auto weapon controllability, at least until they (mags) start running low on rounds.

While the MAG5-100 HCM looks a bit long in length–let's face it, no one's gonna' be goin' traditional prone with it (only "urban prone" will be possible)–and weighs 3.3 lbs fully loaded, it's DefenseReview's understanding that Marines that test-fired both magazines often ended up asking for another 100-rounder (unconfirmed/unverified report, and did NOT come from PM-ICE or PM-IWS). Hmh.

Defense Review would like to run some MAG5-60 and MAG5-100 sample mags at at the range as soon as possible, so we can follow this article up with a range test and review. DR is particularly interested in how the two mags effect weapon balance and handling, and that has to be tested first-hand.

In the meantime, stay tuned!

Estimated MSRP is $129 for the MAG5-60 60-rounder and $179 for the MAG5-100 100-rounder. Not exactly cheap, but prices will probably come down a bit as production numbers increase (DR's guess), over time, just like with many other new products. 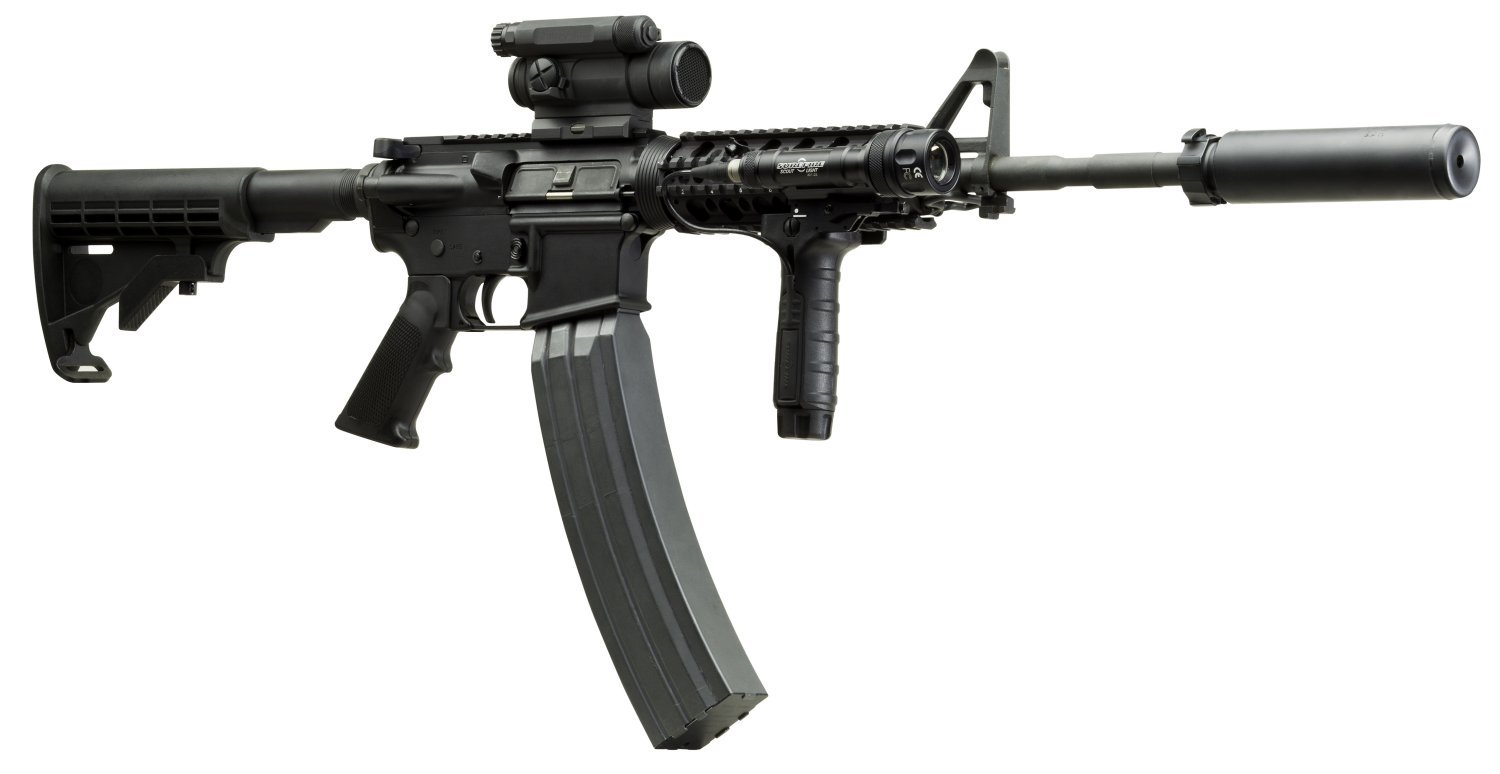 DefenseReview received the following information on the new SureFire HCMs from SureFire:

"In the current wars in Iraq and Afghanistan, a soldier’s ability to respond to an attack with overwhelming force is critical. Ambushes are commonplace and the outcome of the ambush is often determined in the first 30 seconds. Firepower and the ability to stay in the fight are key.

In battle, it takes the average soldier 4 seconds to reload their weapon and reacquire a target; time that could be spent engaging threat targets. At best, 30-round magazines allow an individual soldier to fire no more than 150 rounds in 30 seconds.*

SureFire’s 60-Round Magazine increases that figure to 240 rounds. And its 100-Round Magazine: 293 rounds. This magazine is also meant to increase the effectiveness of group that intends to give full-auto firepower to their operators. Estimated MSRP is $129 for the 60-round and $179 for the 100-round.

Q. Will SureFire be offering nylon pouches for these magazines?
A. Yes. Product specifics and pricing is still to be determined.

Q. What dealers will have access to HCM’s?
A. Authorized SureFire dealers in states with no high capacity regulations. Rules and processes are being developed for dealers located in states with regulations (CA, HI, IL, MD, MA, NY, OH, DC)."

DefenseReview readers may remember our article on MagPul's developmental 4×2 quad-stack mag, which we published in June (2010). It'll be interesting to see how the developmental MaPul hi-cap mag stacks up (excuse the pun) against Surefire's 60-rounder, and vice versa, when it (MagPul quad-stack) makes it to market. SureFire has a number of built-in advantages, though: Surefire got their product to market first, they're a larger company than MagPul, and they have the ArmWest design/development team assisting them.

© Copyright 2010 DefenseReview.com. All rights reserved. This content/material may not be republished, broadcast, rewritten or redistributed without first receiving permission and providing proper credit and appropriate links.