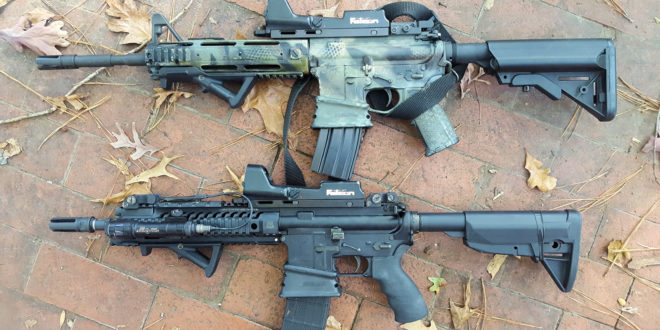 In search of a combat-proven, bomb-proof, red dot combat optic for your AR? Well, it just so happens what you have been looking for has been available since the mid-1990’s. No, it’s not an Aimpoint or EoTech. Instead, it’s the Israeli-made Elbit Falcon MK II Optical Gun Sight, from Elbit Computers LTD (now Elbit Systems). 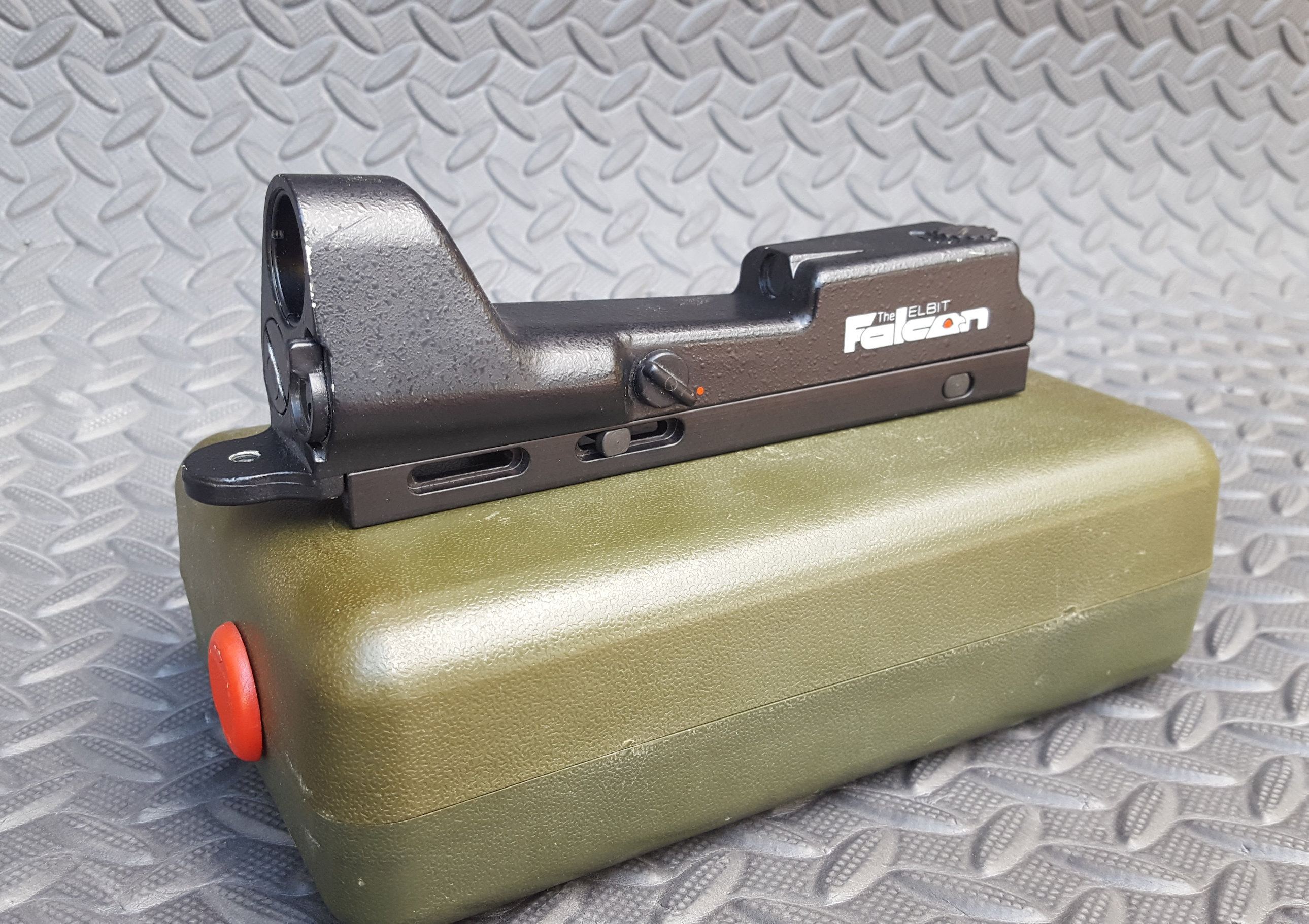 The Elbit Falcon Mark I was the first red dot combat optic issued to general troops with the Israeli Defense Force (IDF) in the early 1990’s. I first became interested in Elbit Falcon sights in late 2004. What had prompted my interest in the first place was a missing capability that I had experienced with the issued red dots at the time, including the EoTech 551 and Aimpoint Comp M2. During the early years in Iraq, this was a lack of auto-adjusting brightness capability. I hated having to manually adjust the brightness of the dot during missions.

Because we always infilled to the targets black outed out under NODS (via air platform, vehicle or dismounted), my red dot would be turned down super low, so I could still aim in low light and not be washed out with too bright of a dot. The issue came about once we entered a village or structures.

If there were street lights, or the lights happened to be on in the target building, I would have to take time to adjust my dot brightness as I moved in. Taking time out to do that, or doing it on the fly as I moved in, wasn’t exactly optimal. I’ve always thought there’s got to be a better way. It seemed the Israeli IDF had also experienced this, and made it a key feature with their first combat red dot optic. 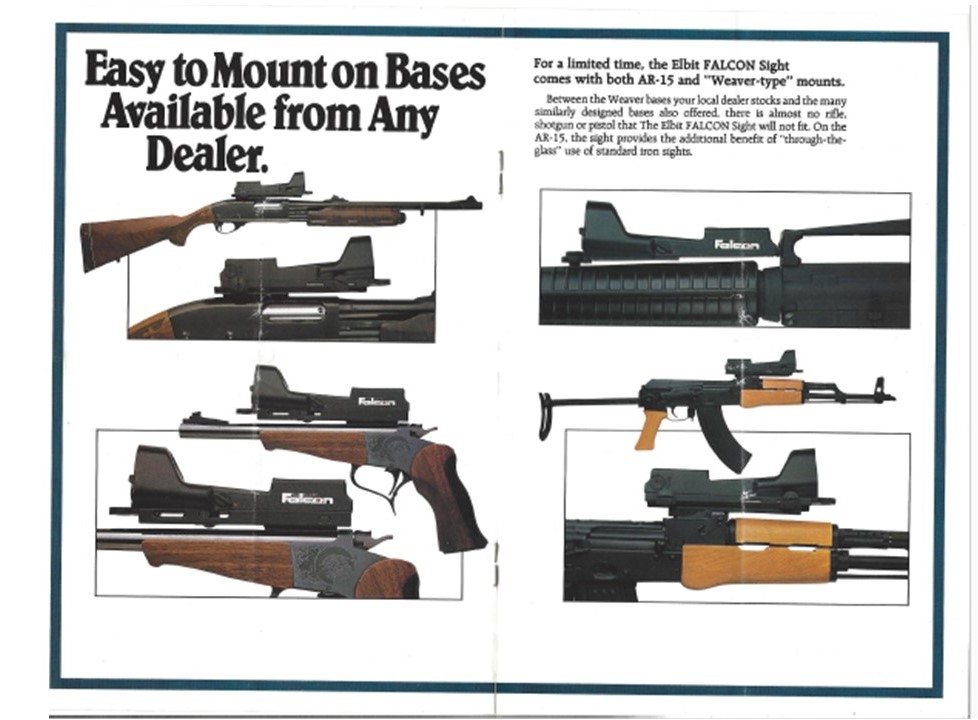 The Elbit Falcon was created long before the flat top M4. As you can see from the sales flyer from the 1990’s, even though the Falcon came with a weaver rail, the intended method of mounting to a M16/AR15 was via a barrel and carrying handle clamps.

I tried (with no success) contacting both Elbit Systems here in the U.S. and the main Israeli office to try and get the exact date when the Elbit Falcon was both created and issued to IDF troops. Internet searches from other Falcon collectors have the Elbit Falcon Mark I being created between the late 80’s and early 90’s, and being adopted by the IDF in 1997. Coincidently, that’s the same year the Aimpoint Comp M2 (M68 CCO) was adopted by U.S. Army for general issue to all combat troops. 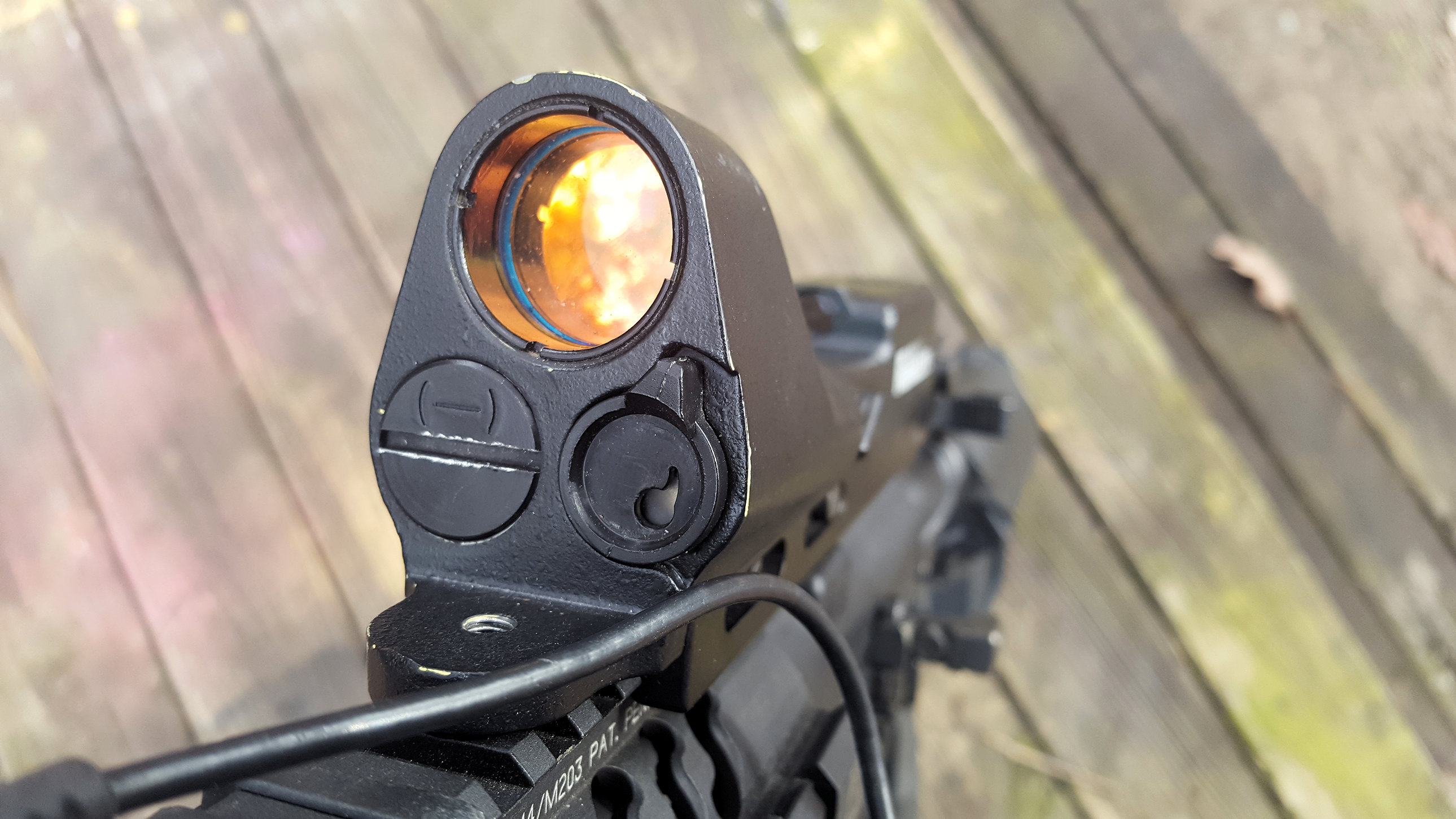 Front of the Mark II battery compartment on the left, light meter on the right. It is possible to manually turn down the brightness via rotating the small hood on the front of the light meter. I’ve found there’s no need for this. The auto-adjusting feature works just fine. 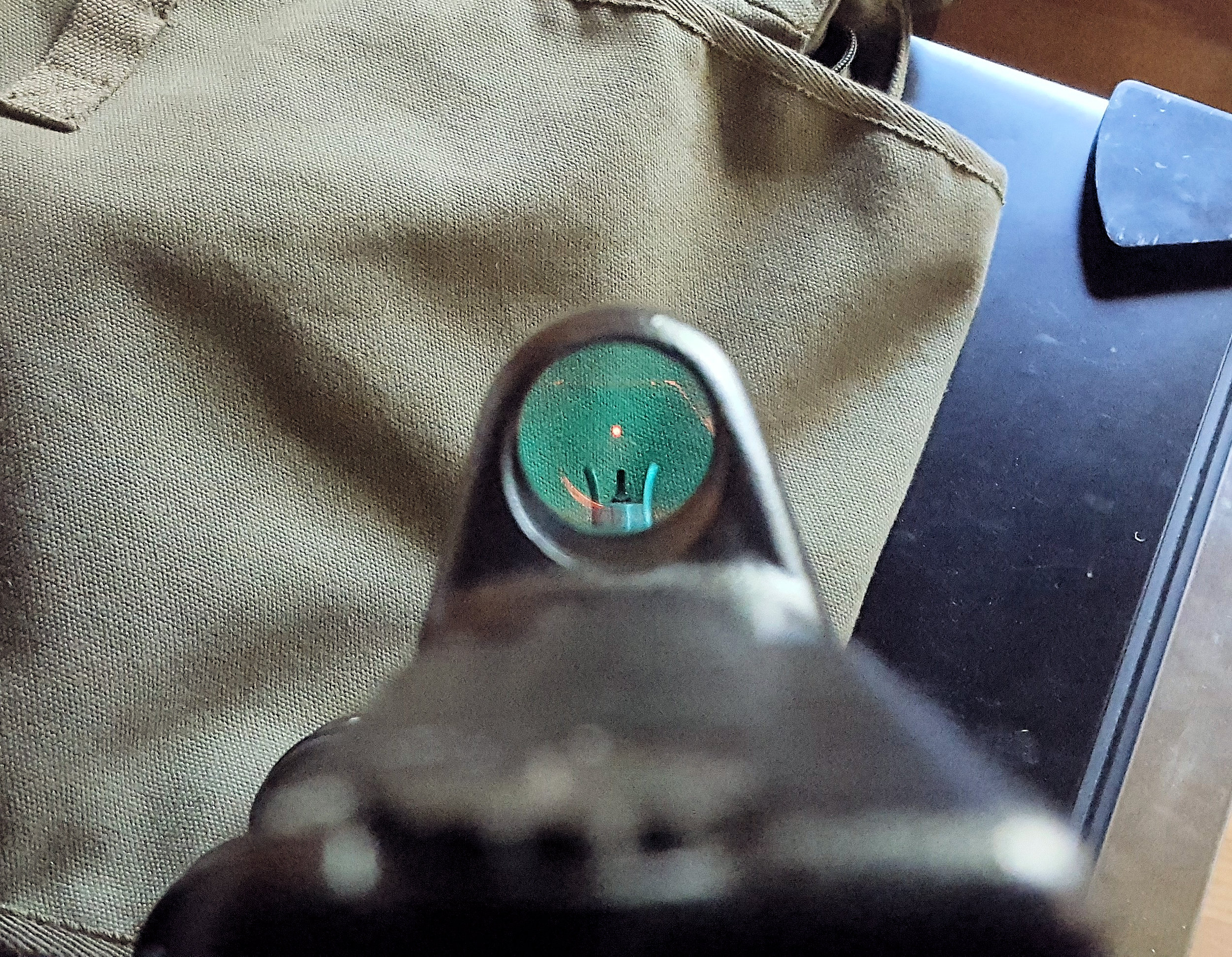 There are two versions of the Elbit Falcon: the Mark I, which was the actual model issued to the IDF, and the Mark II, the commercial sales version. I don’t know if there are any functional differences between the two, but appearance wise, the Mark I has a more curved front profile than the Mark II. The only other difference I can see is that the Mark I’s weaver mount uses throw levers, while the Mark II only has turn knobs. It makes sense that IDF would want a sturdy mounting. 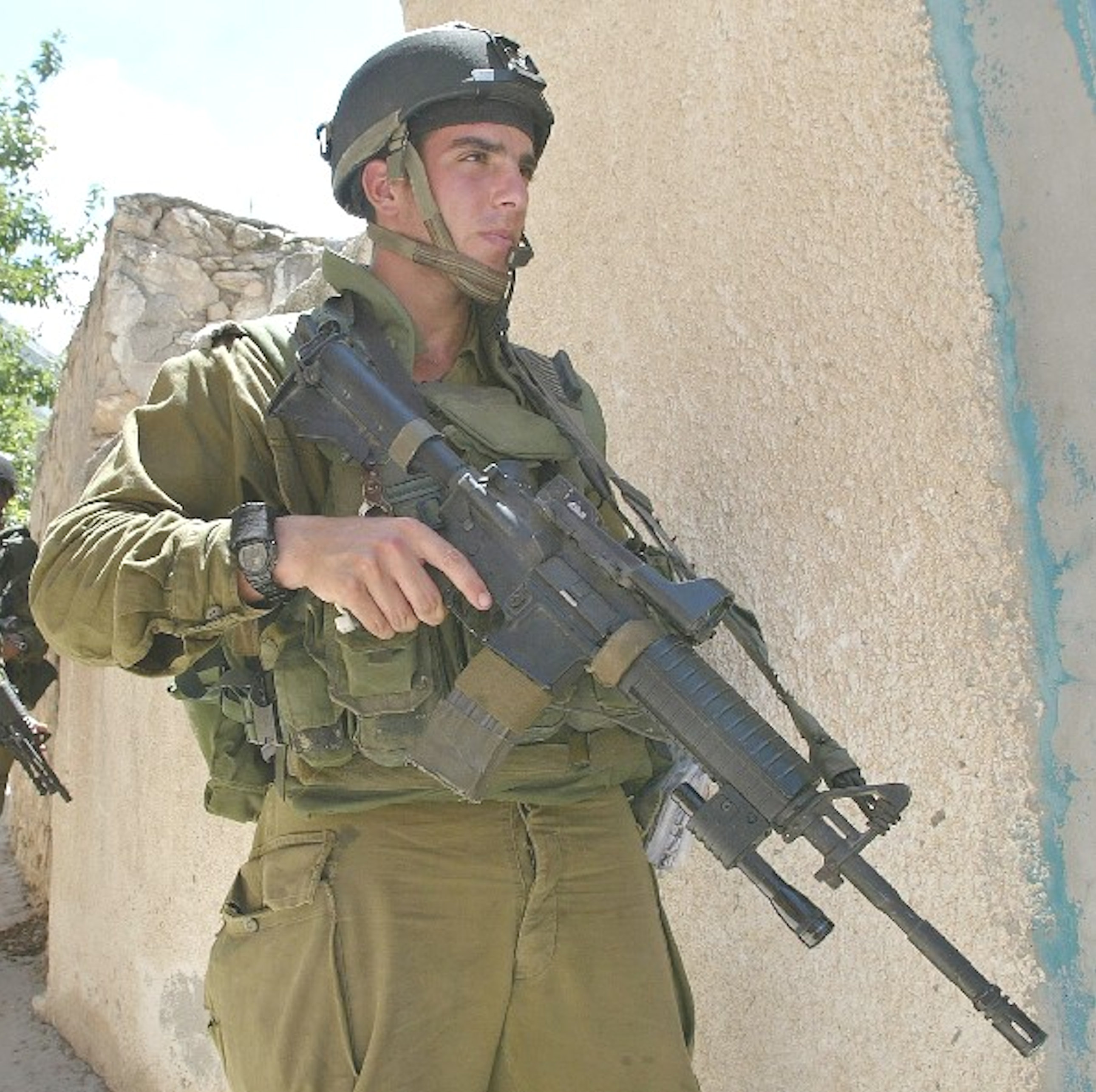 IDF soldier, early 2000s. His M4A1 is equipped with an Elbit Flacon MK I. Note the throw levers on the military version. It also appears that the front lens sits slightly lower on the carbine than that of the Mark II. (Photo courtesy Isayeret.com) 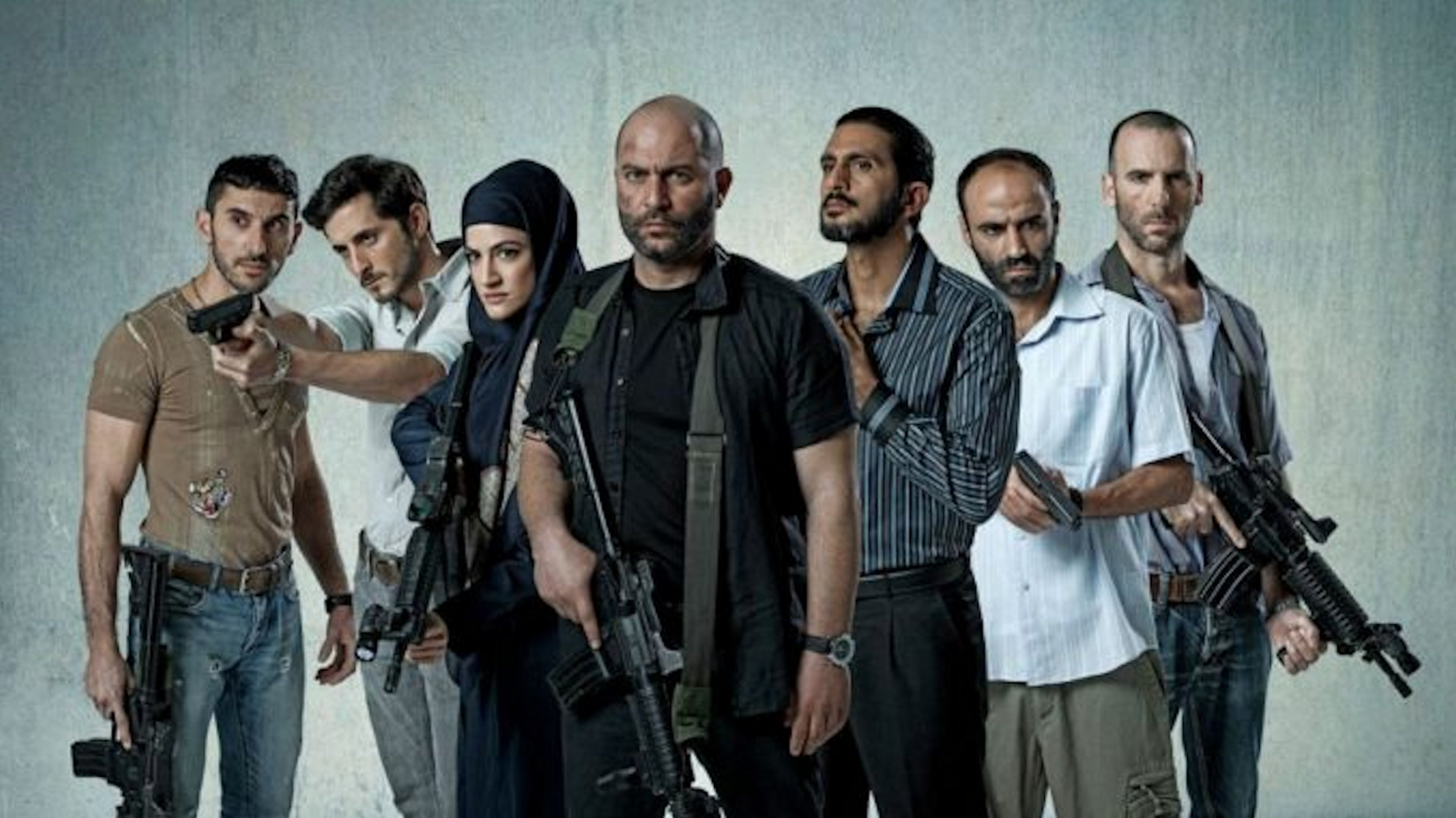 It seems the Mark I is the preferred optic for the members of the Israeli anti-terror commando unit from the Israeli show “Fauda” (available on Netflix). Photo courtesy Netflix. 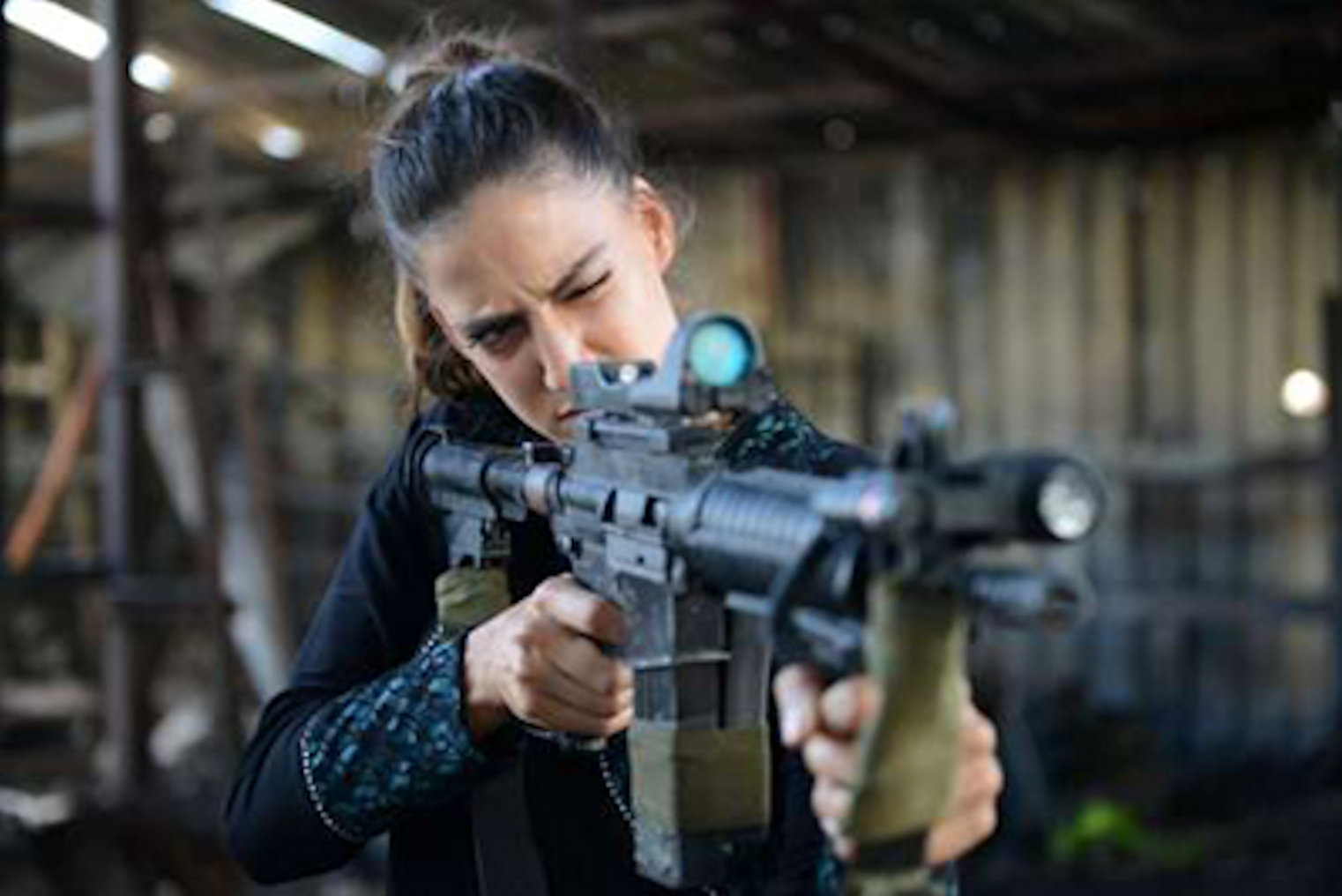 Close up of a Fauda operative holding M4 equipped with an Elbit Falcon Mark I red dot sight. Photo courtesy of Netflix.

The Elbit Falcon Optical Gunsight Mark II is a very robust sight. In fact, how I usually describe it to people is that the sight itself seems to be made from scrap T72 tank armor. Weighing in at 13oz (just over half a pound) it’s pretty heavy for a red dot. But to quote a line from the movie Snatch, where a Russian arms dealer is describing a large revolver, “the weight is a sign of reliability”.

The same can be said for the Elbit Falcon, seeing how the 3 I personally own are all near 20 years old and still work great. If the robust design makes the optic capable of taking a beating and withstand the test of time, then the extra weight isn’t a bad trade off. 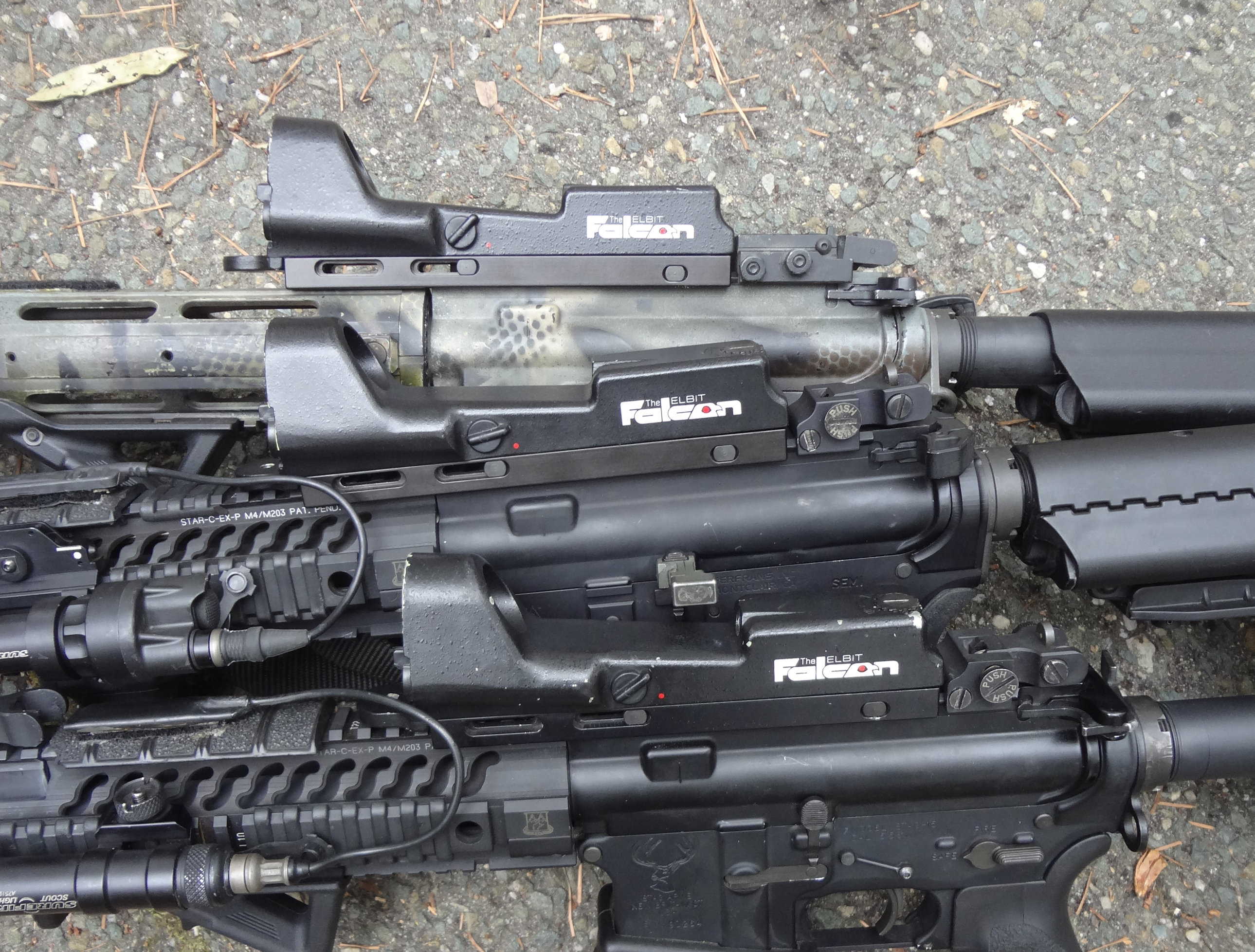 Out of the three Mark IIs the author owns, only one doesn’t work well enough to be considered for serious shooting work. 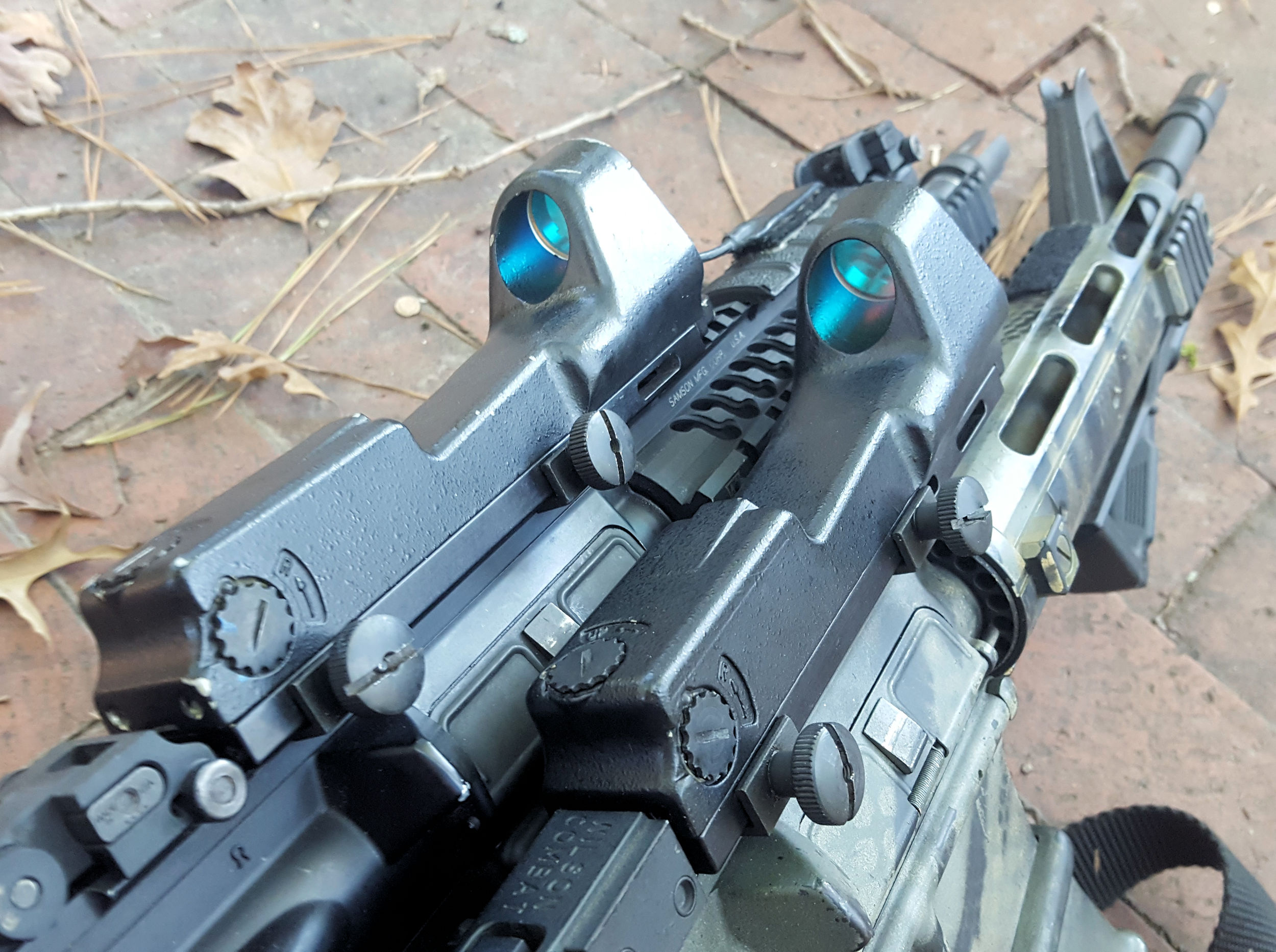 The windage and elevation controls on the Mark II being almost the same size as the windage knob on a M16A1 are hard to miss. They do offer positive clip adjustment, and the author’s hardest used Falcon Mark II has never lost its zero from firing.

So, just how well does it work for a red dot? As I had mentioned, I purchased one out of a desire for an auto-adjusting red dot. I’m pleased to say that the first one I purchased worked well enough that, although I didn’t take it to combat, I used it for a few years on my work gun for training from CQB to flat range shooting, to even a trip to Mid-South Institute of Combat Shooting. 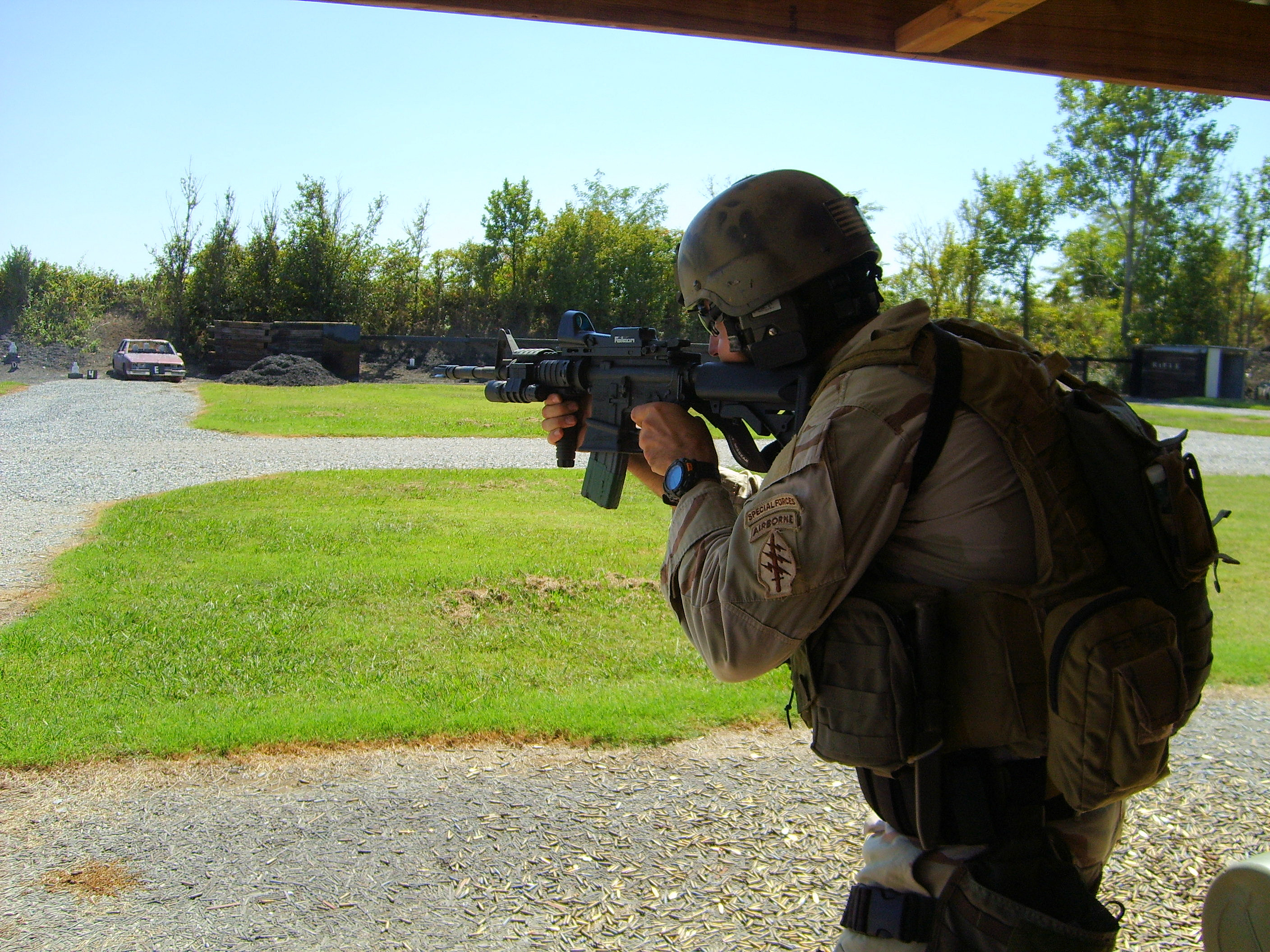 Author shooting M4 equipped with Elbit Falcon Mark II at Mid-South circa 2005. The dot appears to be around 5 MOA (yes a little large), but for anything out to 300 meters, that’s totally acceptable. As far as the auto-brightness goes, two out of the three Falcons I own work prefectly. The dot gets brighter in bright light, and dims to a level you can still see, but not red washout in limited and no-light conditions.

Now, the one that doesn’t work so well is plenty bright for flat range shooting in daylight. However, if you take it indoors, the dot dims too much, making it very hard to make out. So, no, I wouldn’t trust it for tactical or protection work. Searching the internet, out of the two or three reviews I’ve found from other owners of the Mark II, there are similar mentions of this issue of the dot being too dull indoors. I don’t know if it’s a quality control issue that some of the Mark IIs’ light meters don’t work so well, or if it’s just the fact that these are 20-year-old optics. 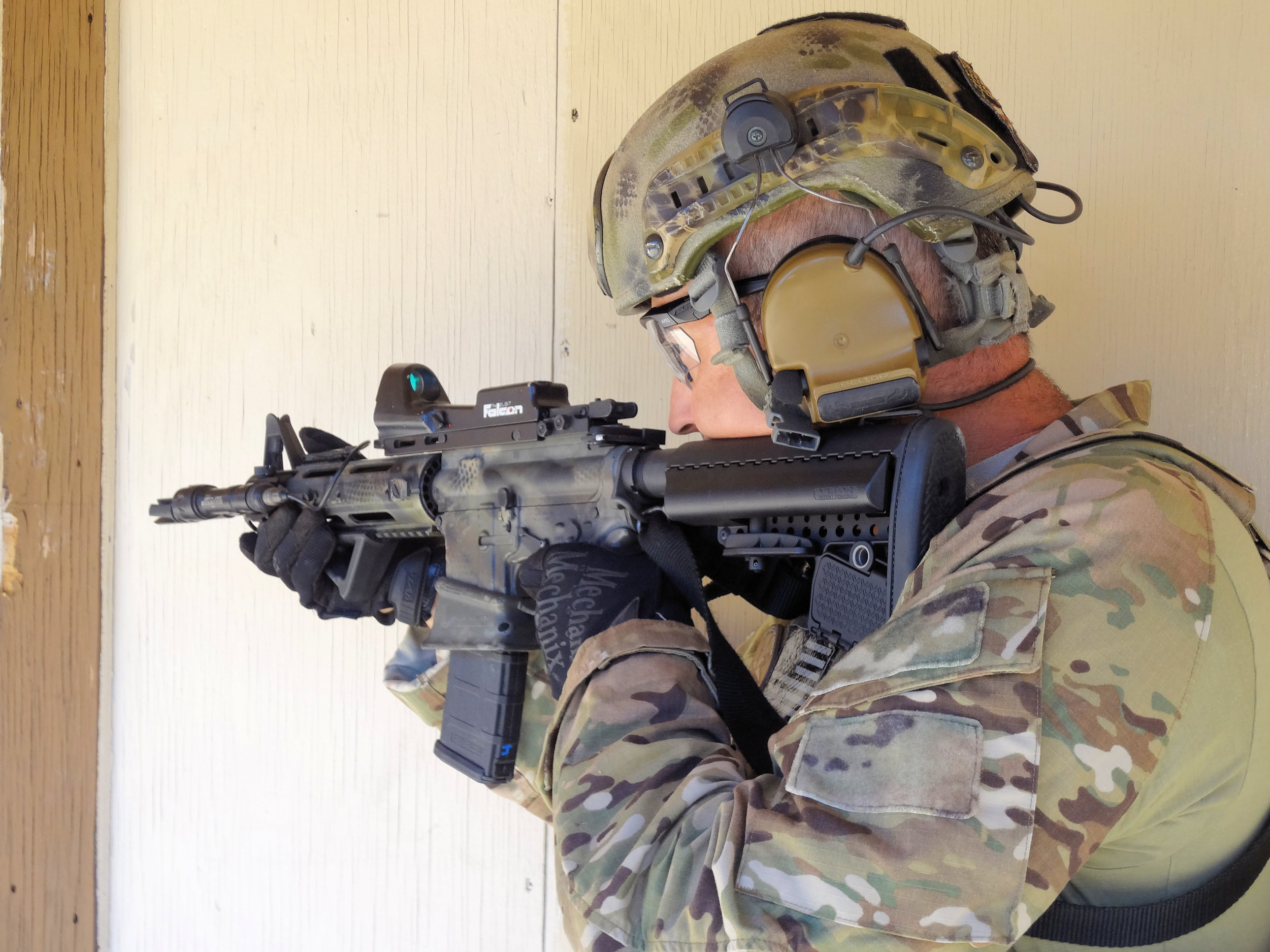 But that’s the only issue I see with purchasing one; there’s a chance it won’t work well if you plan on using it indoors for CQB. Regarding the two I own that do work great, would I use one down range in combat? Yes I would, if the situation were right. In Iraq, the farthest shot one could expect, since most action took place in urban areas, was around 300 meters. I actually ran an Aimpoint or Eotech during all three of my tours there. So, yes, for something like that, I would have no problem trusting an Elbit Falcon Mark II. Now, ship me off for an Afghanistan tour, and that’s another story. I’d definitely want a magnified optic for the extended ranges in which most firefights occur there.

For flat range use, while there’s a slight blue tint to the lens, I’ve had no problem using a Falcon. In fact, when I first got into 3-Gun matches years ago, guess the first optic I used. Yep, my trusty Elbit Falcon Mark II. 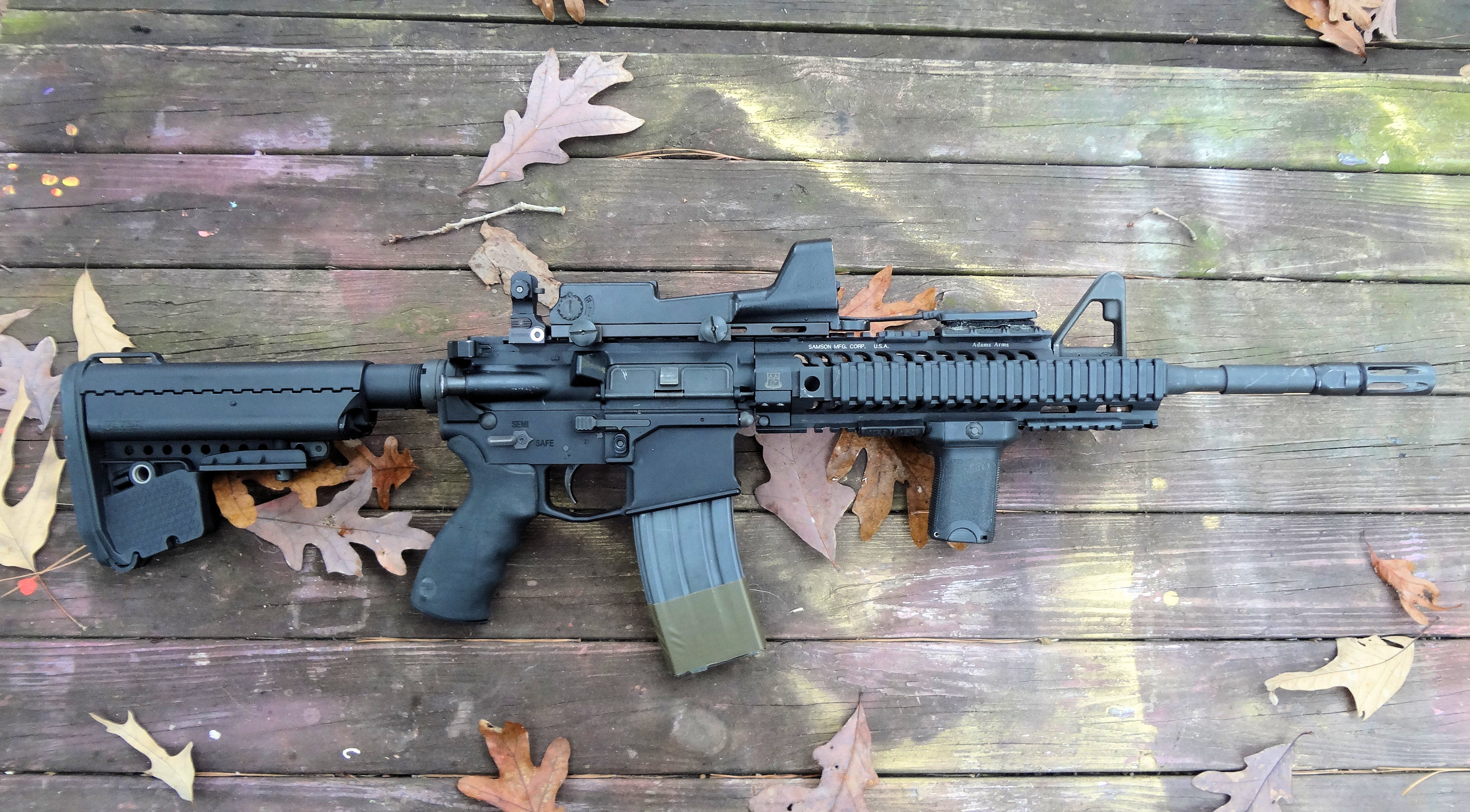 Although originally never intended to be mounted on a flat top AR, the Mark II with weaver mount sits just low enough for 1/3rd co-witness of rear BUIS. The turn knobs, while less than ideal, work well enough. With a little blue thread locker, there are no issues with the mount coming loose from the carbine.

The Mark I was replaced in the mid-2000’s within the IDF with Meprolight reflex and MARS sights. I don’t know when commercial production and sales of the Mark II stopped, but it was before 2005 when I purchased my first one used (condition). Today, you can still find Mark IIs for sale online in various states of condition. For a working Mark II with all its mounting accessories (weaver mount, A1 barrel clamp, carrying handle clamp, extra base plate, manual and plastic box), I’ve seen them sell for $350 to $450. For Mark IIs minus some of the accessories, I’ve seen them go anywhere from $150 to $200, depending on what it’s missing. 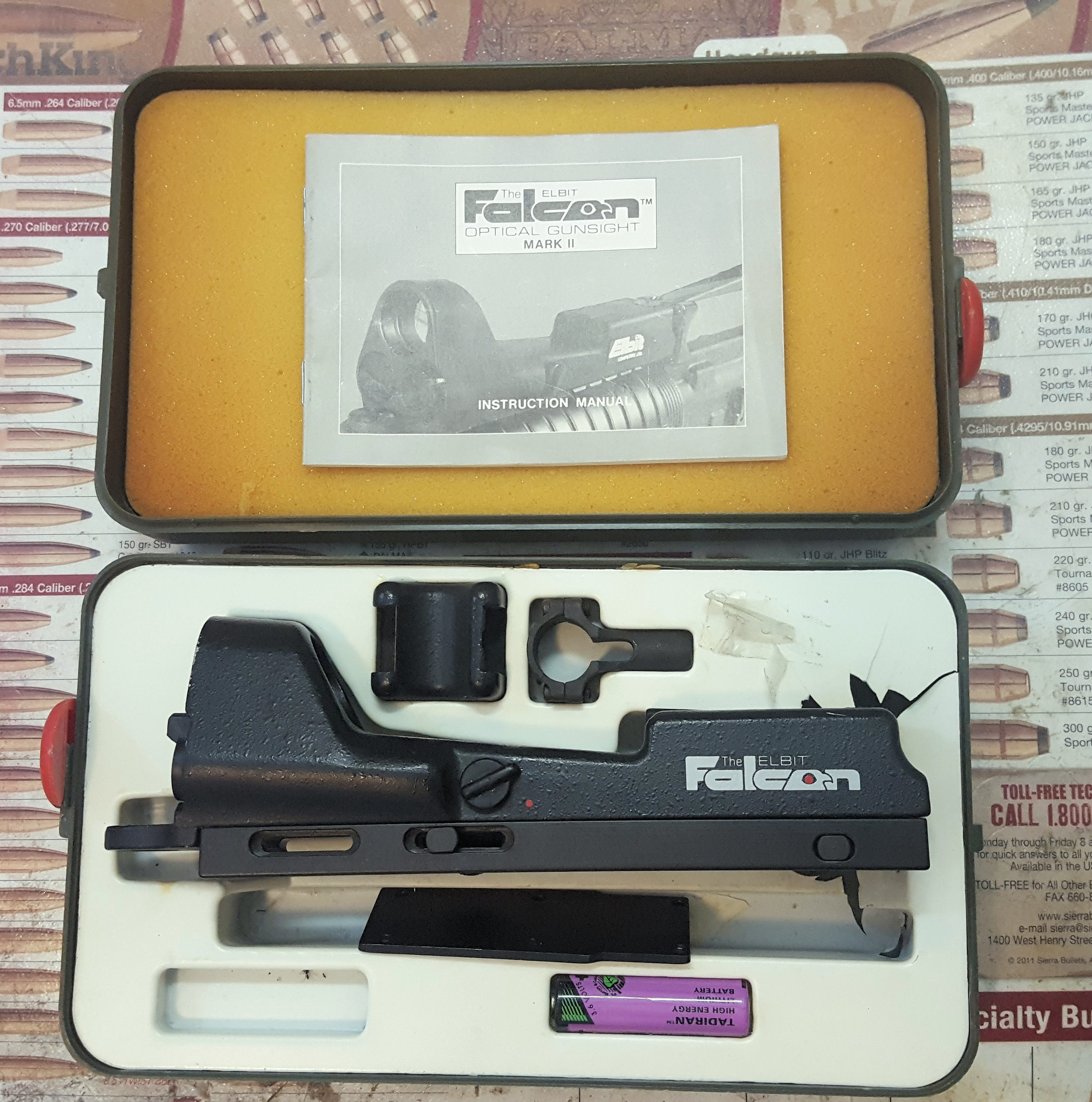 A complete working Elbit Falcon Mark II with the optic, weaver mount, A1 barrel and carrying handle clamps, base plate, plastic serial numbered box, and owner’s manual can typically be had online for anywhere from $300 to $450. 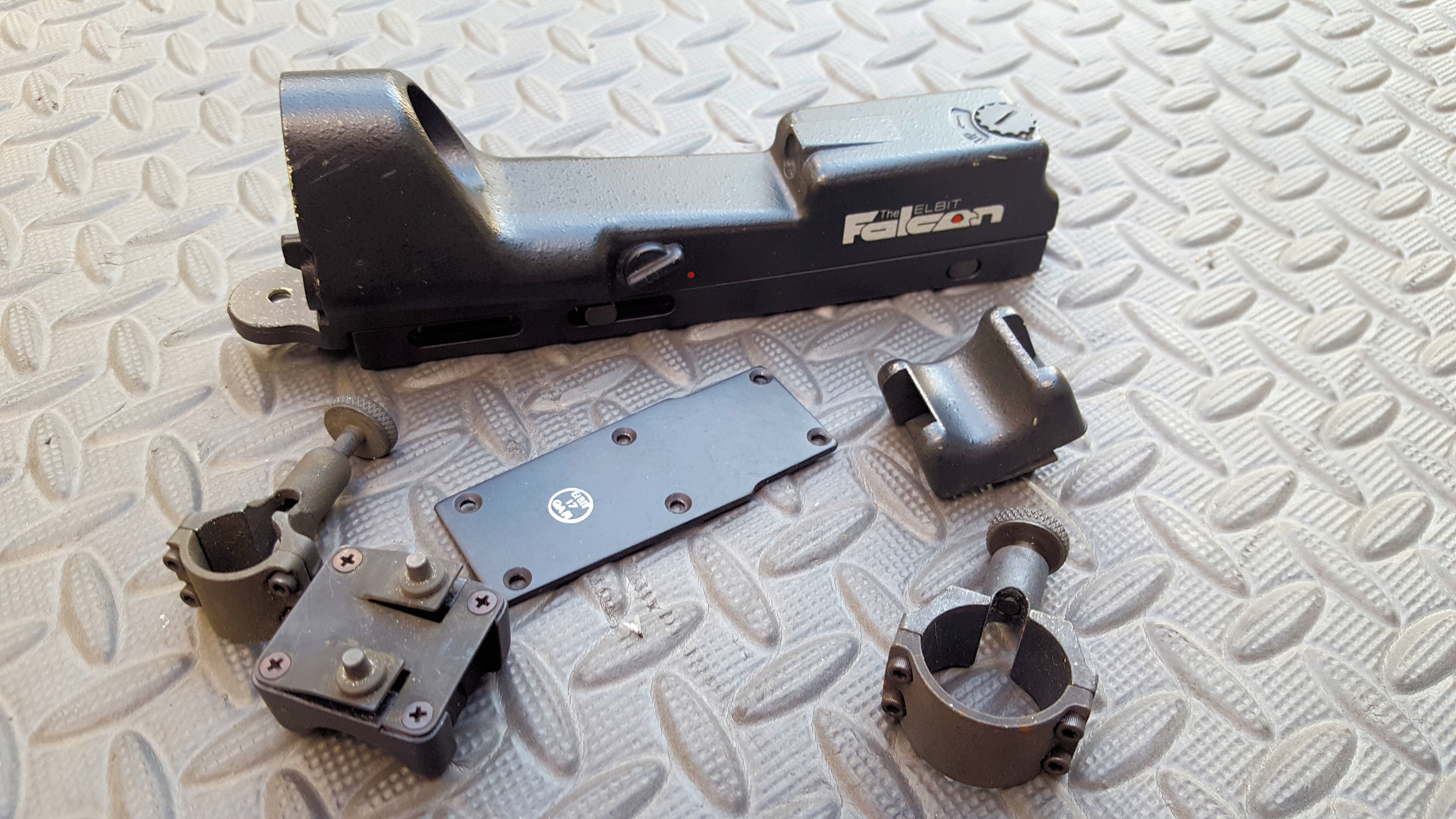 One thing I’ve noticed during my search for Elbit Falcons over the years is that most people who have them usually own more than one. The reason for this must be similar to why I now own three. They’re actually very practical red dots (if you have a good working one), and offer a capability (the auto-adjusting dot brightness) that, still to this day, is not available from the two giants of combat red dots, Aimpoint and EoTech. 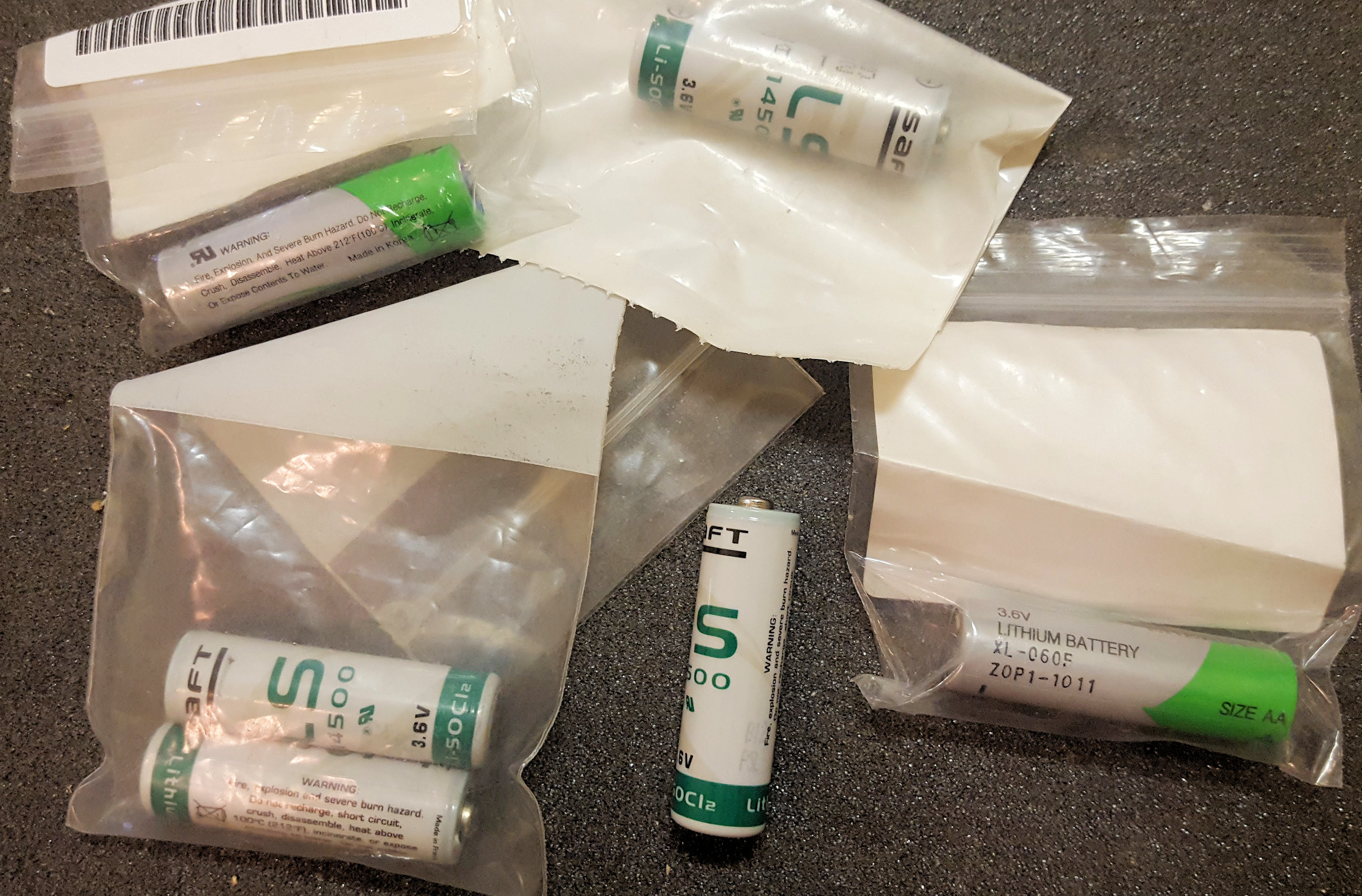 The Falcon Mark II does take an unusual 3.6-volt lithium battery. While not a commonly sold battery, they can be found online for sale pretty easily. In terms of battery life itself, while it’s not left on all the time. (Only turned on when at the range), the author’s only had to change the battery twice on his oldest Mark II (since 2005). 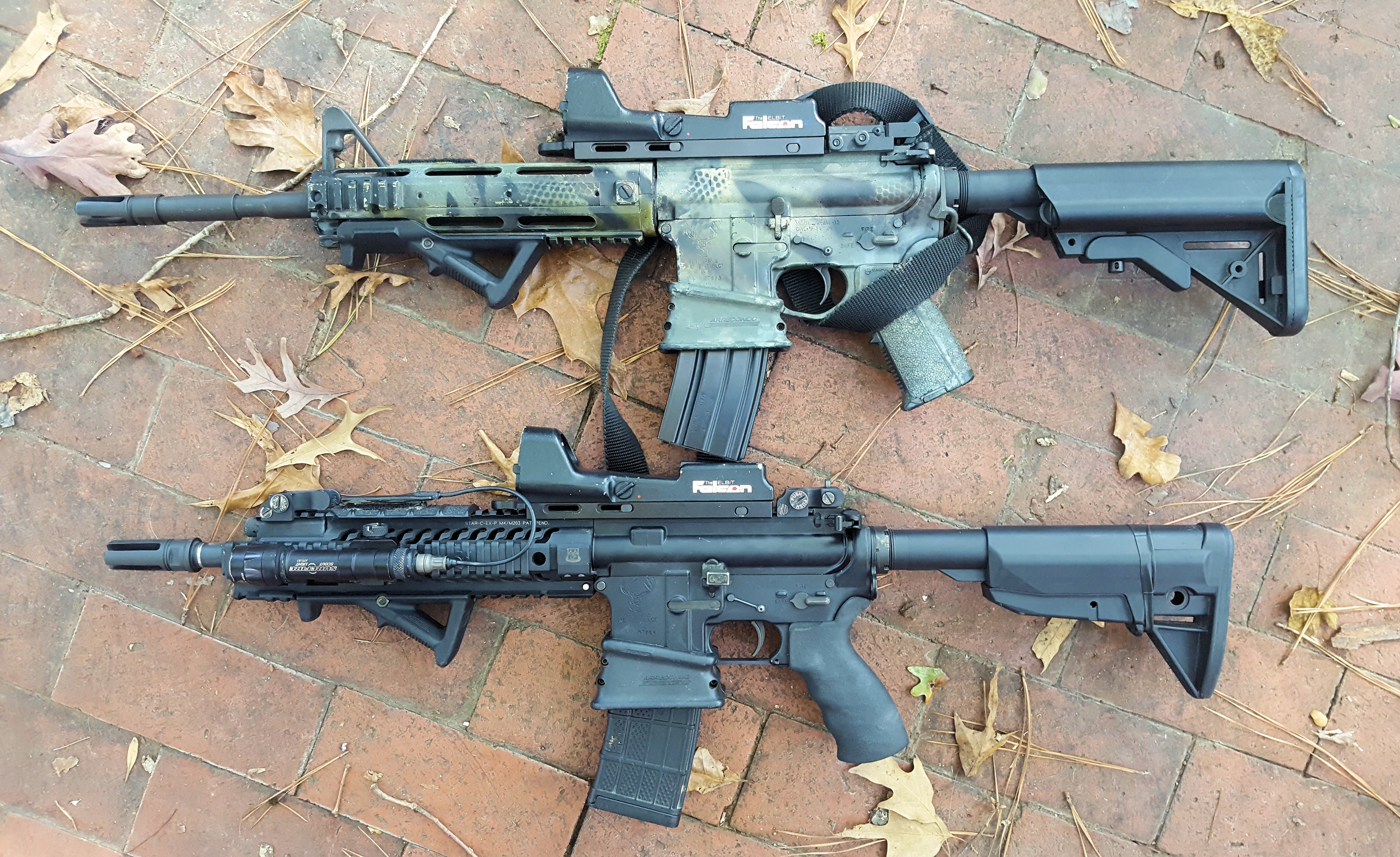 Aside from still being a practical red dot, the Elbit Falcon Mark II, if anything, can give your AR very unique look.

So, if you do happen to come across one for sale, should you purchase it? For use as your sole optic, well, maybe not. I would go with a modern red dot. But, if you’re like me and already have a few rifle set-ups with good optics on them, then hell yes! I say jump on it if the price is right. You’ll not only be getting a piece of military/optic history, but also a red dot that can still hold up well on the flat range, or maybe even in a self-defense tactical scenario. 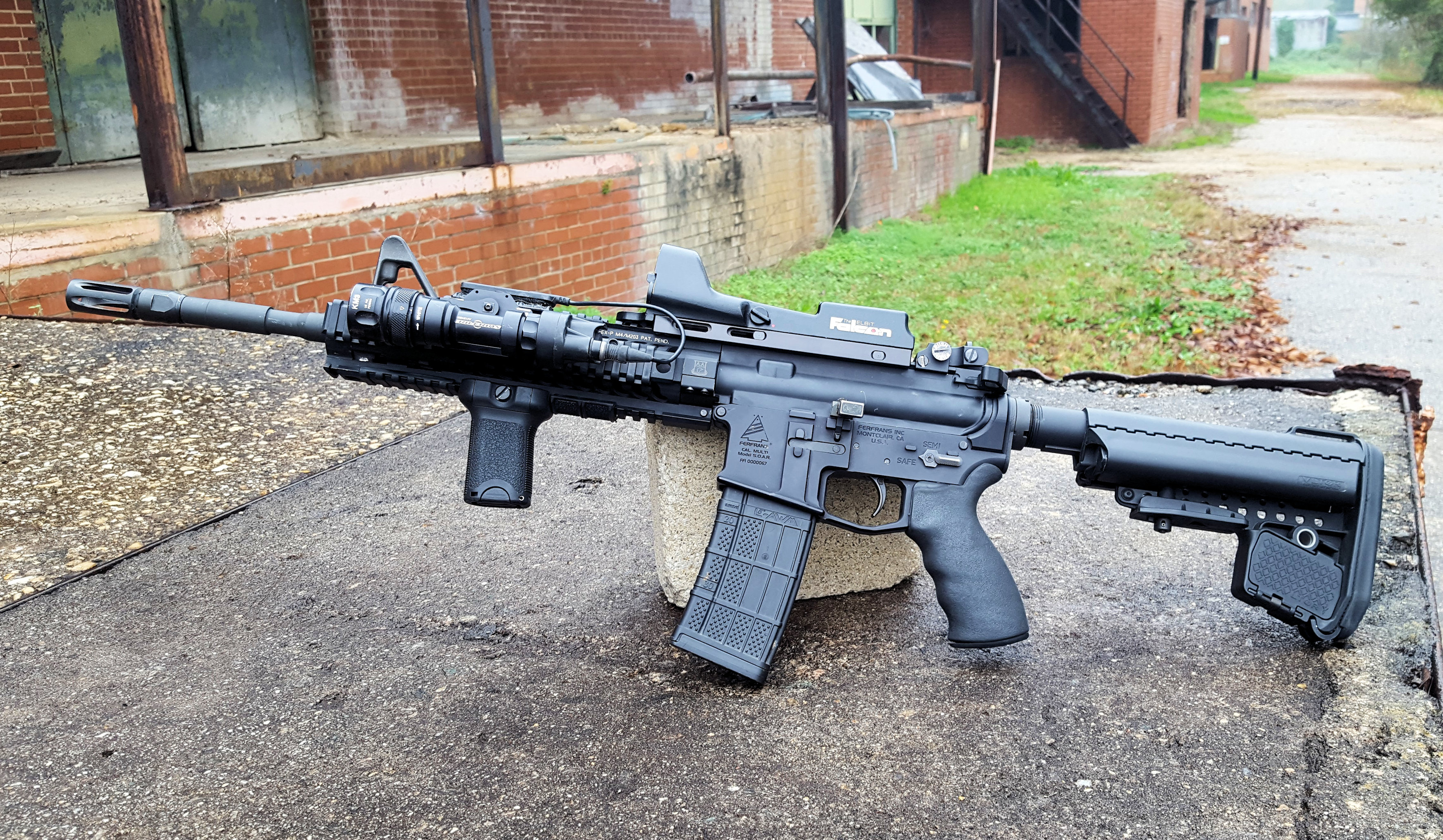 David Crane started publishing online in 2001. Since that time, governments, military organizations, Special Operators (i.e. professional trigger pullers), agencies, and civilian tactical shooters the world over have come to depend on Defense Review as the authoritative source of news and information on "the latest and greatest" in the field of military defense and tactical technology and hardware, including tactical firearms, ammunition, equipment, gear, and training.
Previous SIG MCX VIRTUS Patrol Semi-Auto-Only Tactical AR-15 Carbine May Just Be Important: Time (and Hands-On Testing and Evaluation) Will Tell
Next Defense Strategies Institute (DSI) Special Operations and Irregular Warfare Symposium 2017 is Coming Up Fast! Don’t Miss It!