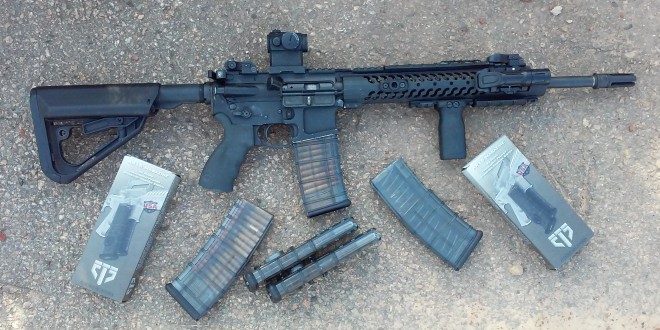 When it comes to AR magazines, one thing I have always wondered about is the lack of coupling-capable magazines here in the U.S, unlike those available for European rifles like the SIG 550, and the German G36 (both of which have been in service for over a decade and more). Their magazines were designed from the beginning to be able to be coupled together via built-in attachment points, giving the shooter the ability to carry a spare magazine on the rifle. (A handy option for the shooter needing a spare magazine readily available while going into harm’s way).

Until very recently, that option has only really existed here in the U.S. through using extra components such as strapping two magazines together using a device such as the FOBUS AR Mag Coupler, or using a device that attaches onto your AR such as Boonie Packer’s REDI-MAG, which allows you to hold a spare magazine on the gun. While both do work pretty well, I have still always desired some magazines that can lock together by themselves like our European counterparts’ magazines.

I am happy to say that there is finally a magazine made right here in the USA by Elite Tactical Systems Group (ETSG) that, like the G36 and SIG 550 mags, give you the capability to couple two or more together without using some extra device designed specifically for the AR/M16/M4/M4A1 series rifle/carbine/SBR (Short Barreled Rifle).

Their magazine, the “ETS AR Mag” or “ETS AR Magazine” (5.56mm NATO/.223 Rem.), is a translucent ALL-polymer magazine (listed as “smoke” on their website). It comes in two variants: standard 30-rounder and a 30-round coupler version that allows you to mount two mags together (or more if you wanted to) via built-in attachment/coupling points on the magazine. 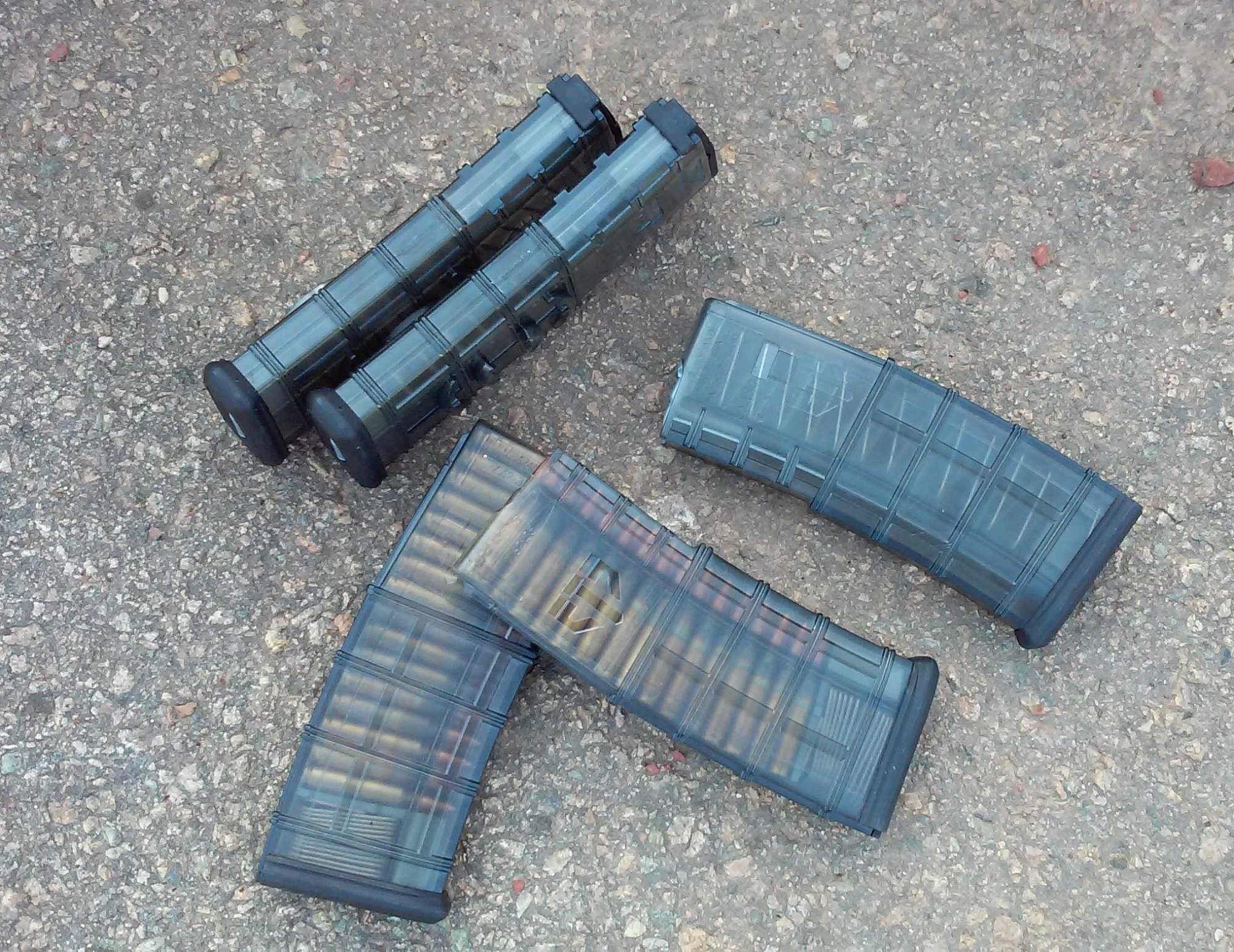 ETS magazines; three standard and two coupler versions were evaluated over a month of shooting.

The coupling-capable ETS AR Magazines are very simply to operate. Once I attached them together, I found them to be pretty sturdy. You can even attach or detach the extra mag while keeping one loaded in your magazine well. I found this to be a pretty cool feature. For those who do not like the extra weight or bulkiness of an extra magazine on their rifle, the coupling-capable ETS AR Mag gives the operator/shooter the additional option of attaching a spare one just before he’s/she’s about to enter a danger zone or infill onto an objective (see video immediately below).

As with any coupled magazine system, being able to have an extra magazine right on your rifle can be very handy and make for a very quick tactical or bolt-lock reload. To mate two magazines together, simply positon two ETS Coupler AR Mags rotated 90 degrees to each other, line up the raised semi-circle attachment points, (you can do it by feel, as one ridge will lock in under another), then just rotate the outer magazine up so they are both vertical. This locks them into position, coupling them together. 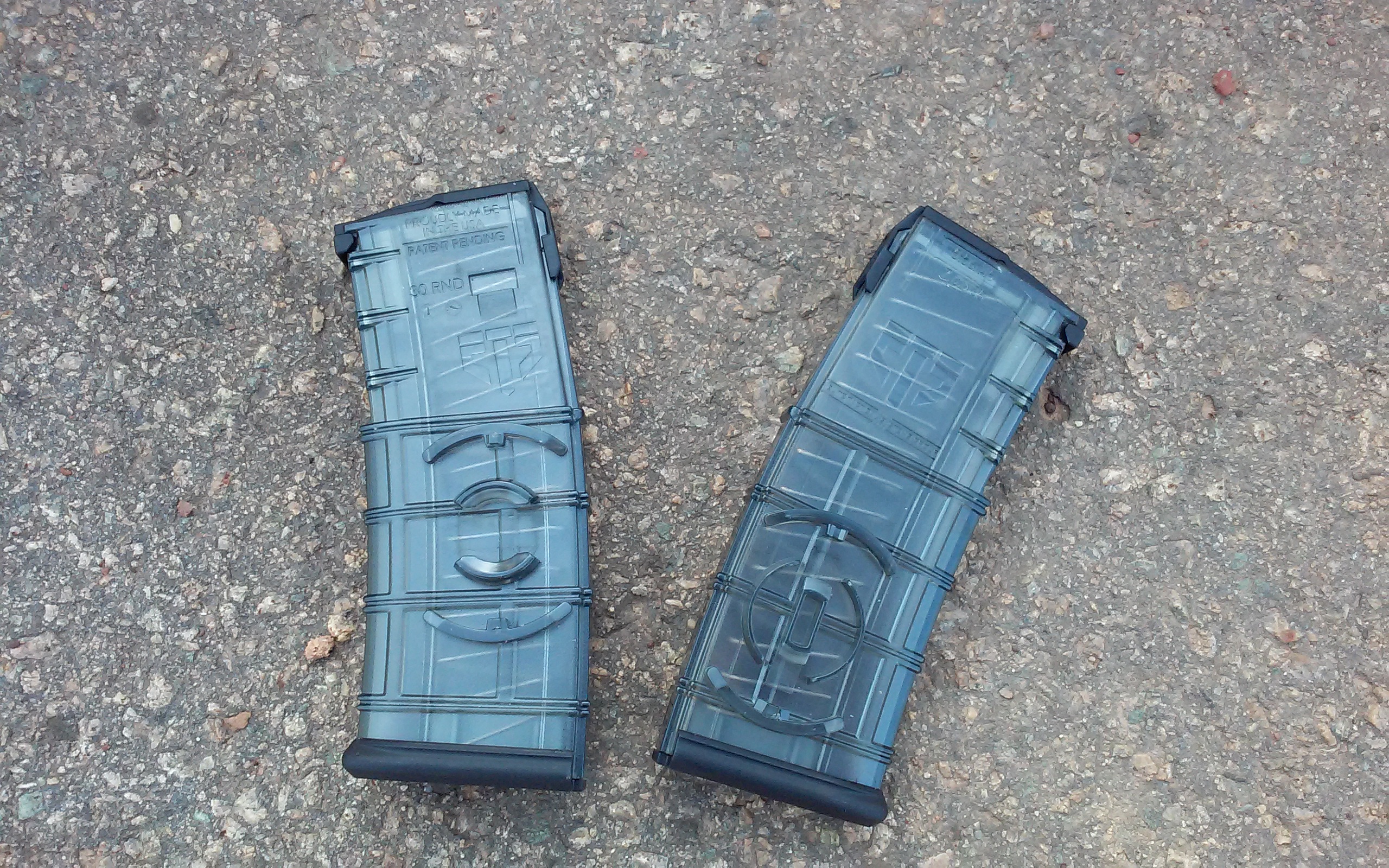 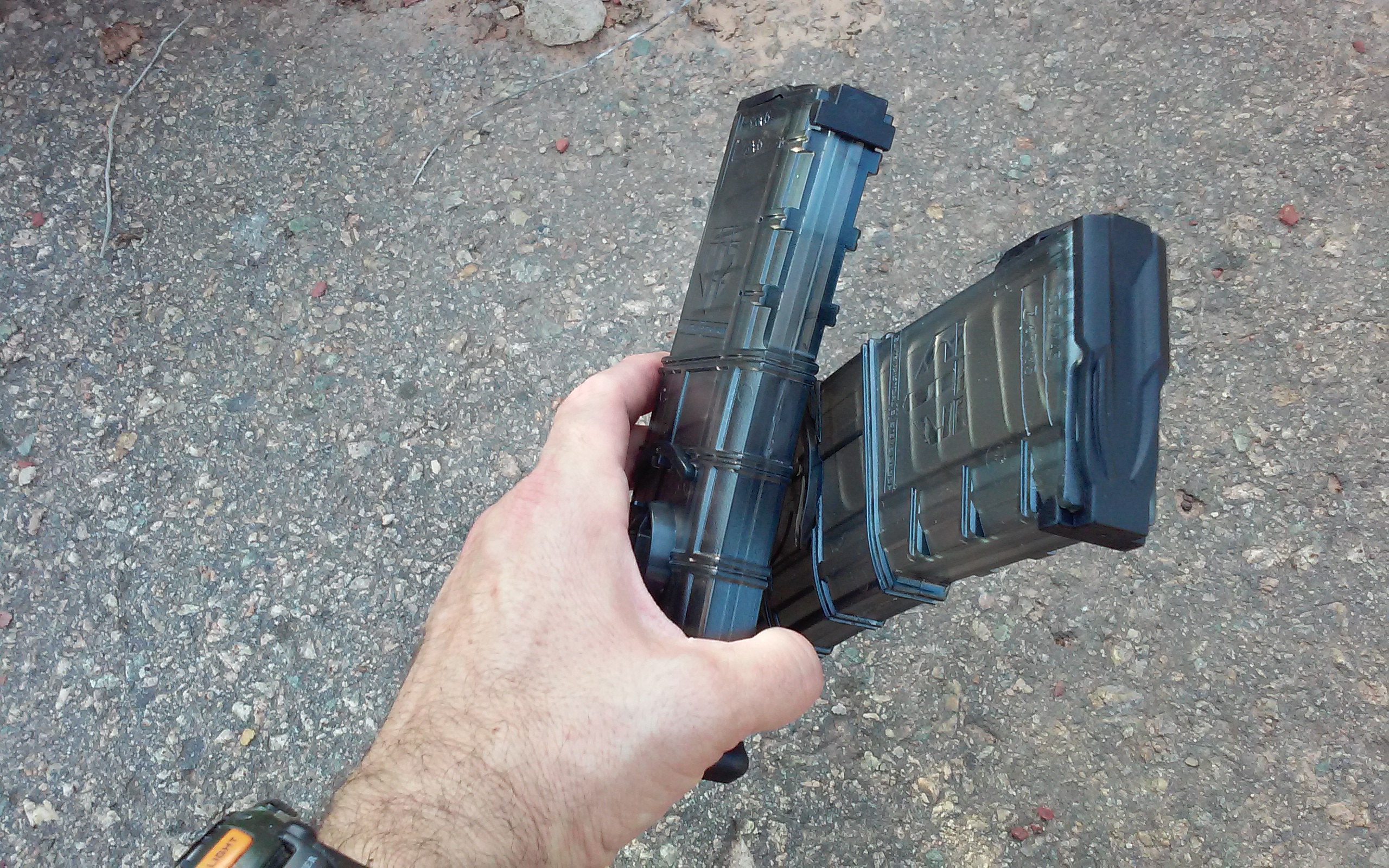 Step 2: Line up magazines 90 degrees to each other 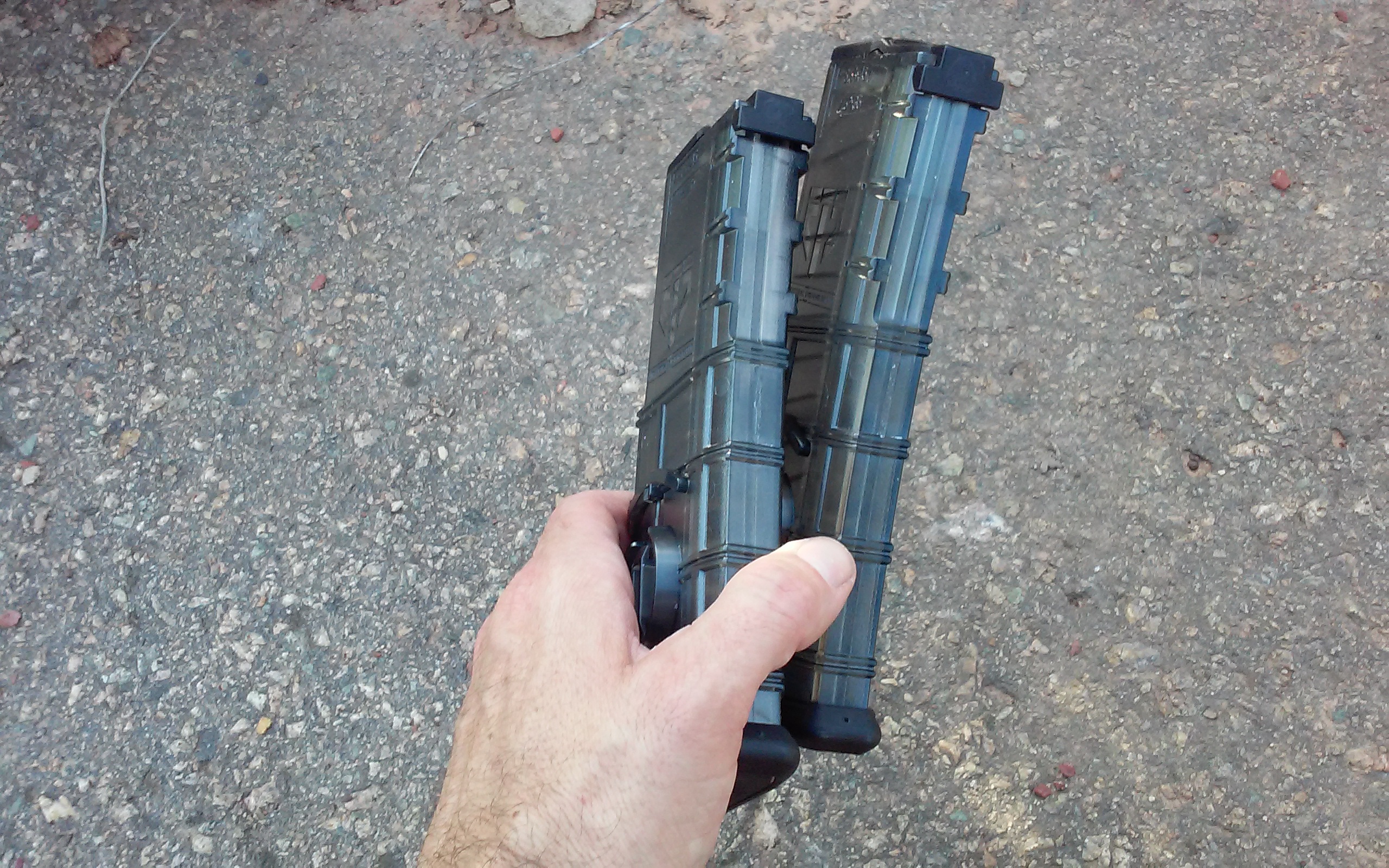 Step 3: Align the circular ridges (one will fit under the other) and start rotating the 90 degree mag so that is vertical with the other one. After some practice I found I did not even have to look I could do it by feel. 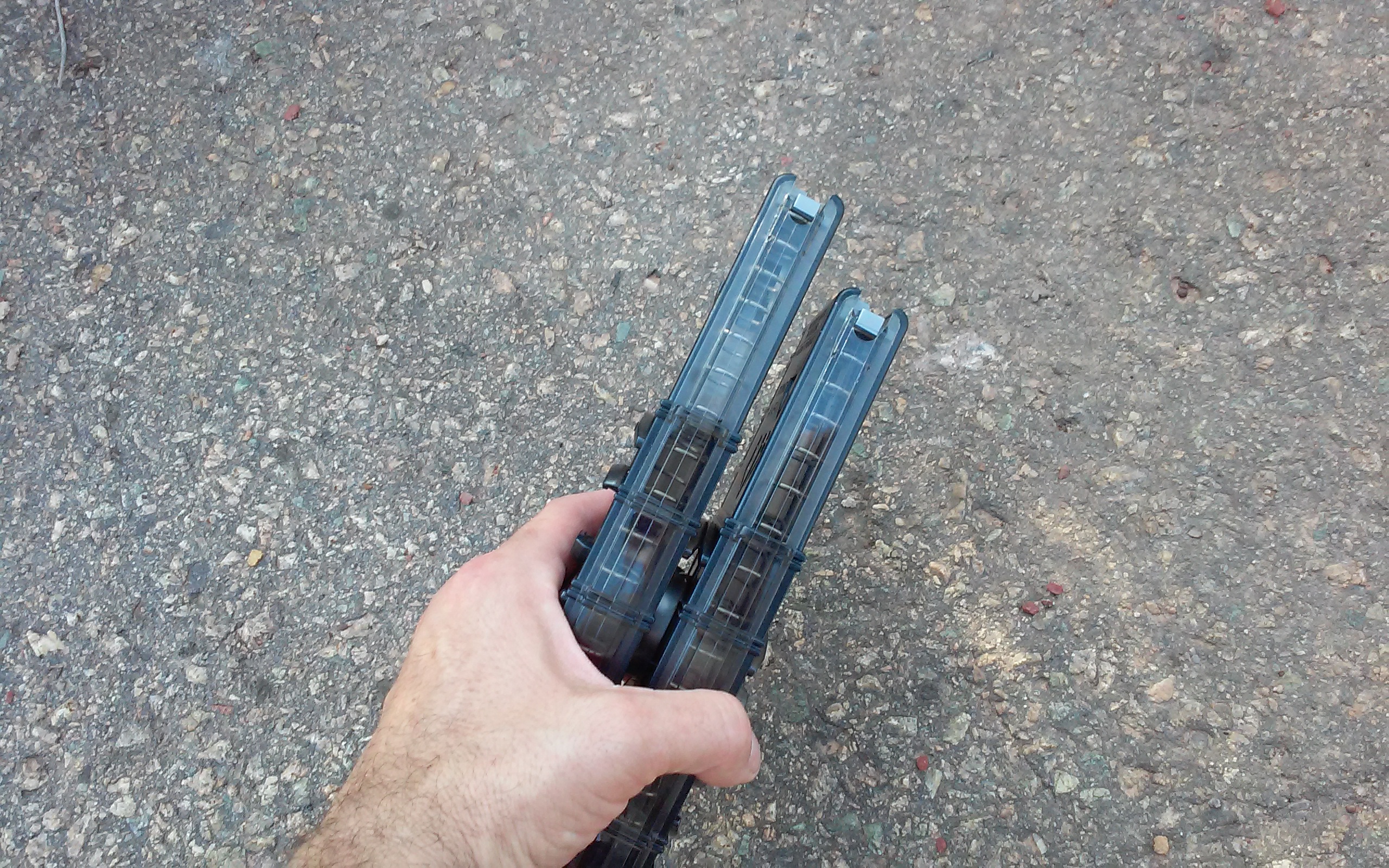 Step 4: Once both magazines are vertical, that’s it they are locked together and you are ready to shoot! 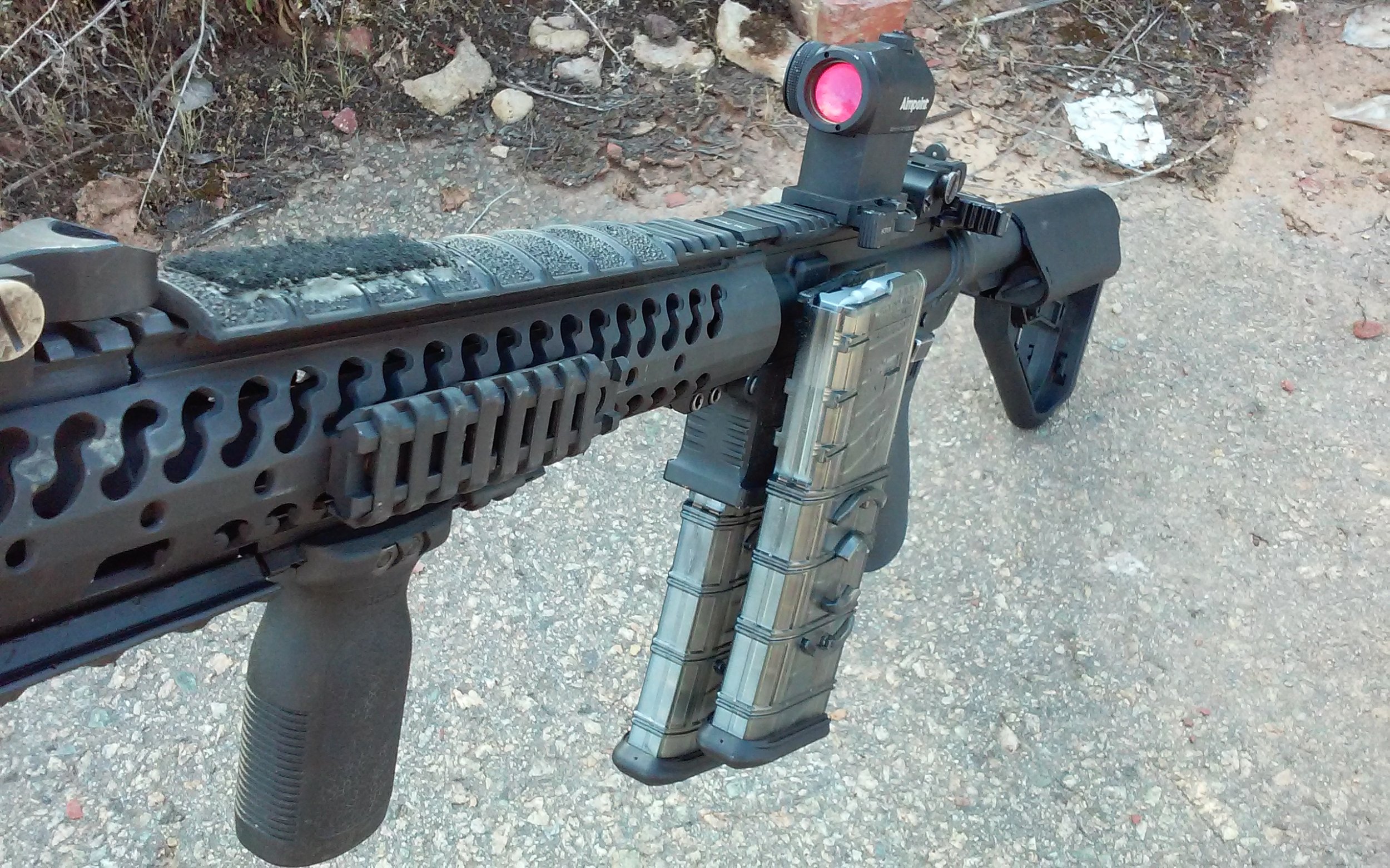 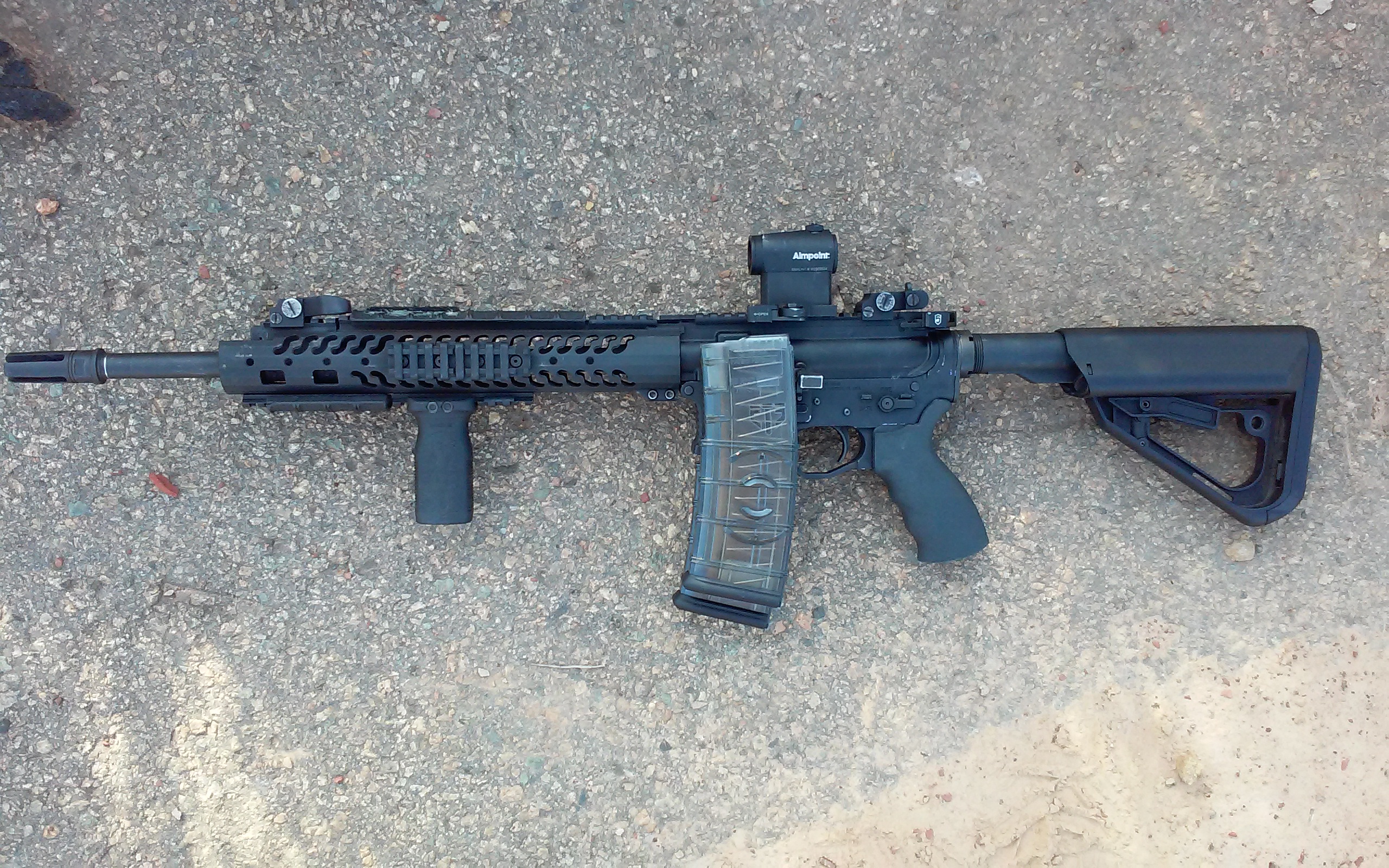 On first handling and inspection of the ETS AR Magazines (I have five to test: three standard 30 rounders and two that can couple together), right off the bat, the biggest thing I noticed is how smooth the followers move up and down in the magazine. In fact I can honestly say ETS Magazines have the smoothest-feeling followers I have ever felt compared to any other polymer magazines. Pressing down on them feels like the follower is literally sliding on glass.

Something I look for in all magazines I test, and find to be very important, is upon loading them, you cannot load more than 30 rounds in the mag. Time and again I have seen shooters both military and civilian unknowingly load 31 rounds in a magazine then try and load it on a closed bolt. The result: the shooters goes to shoot and their magazine falls out. Having 31 rounds in the mag will not allow it to fully seat in the rifle.

Believe it or not, there are some magazines out there from some big name manufacturers that allow you to load 31 rounds in when they’re brand new, right out of the box. So, by not allowing this, the ETS AR Mags are already a step ahead of some of their competitors.

Over a month-long period, I put a few hundred rounds of multiple types of 5.56 ammunition, including 55gr Walmart special, 62gr “Green Tip”, and MK262 Mod 1 77gr ammo through the ETS AR Mags. For testing, I conducted mainly speed drills such as Kyle Lamb’s 2x2x2 drill, and also used them while competing in a USPSA rifle match. While the round count was not in the thousands, during this period of several hundred rounds, I experienced zero stoppages or jams with the ETS Magazines. I included loading one up and letting it stay loaded for a month before shooting it. It also ran with no issues. Overall, the ETS Mags ran great.

One important item I would like to point out is the successful operation of the ETS AR Mags with MK262 Mod 1 ammo. Because of the design of MK262 (it has a flat tip to help stabilize it in flight), I’ve had issues with it running with other magazines I have tested for DefenseReview (DR).

The ETS AR Magazines’ ability to run this ammo with no issues is, in my opinion, an important factor to point out. Even though most civilian shooters might not ever use military ammunition, any magazine that comes onto to the market should be able to work with all types of ammunition out there. If a magazine has an issue with military ammunition, for me, that is a problem. I do not want to see some Soldier run into issues down range because his magazines don’t work. 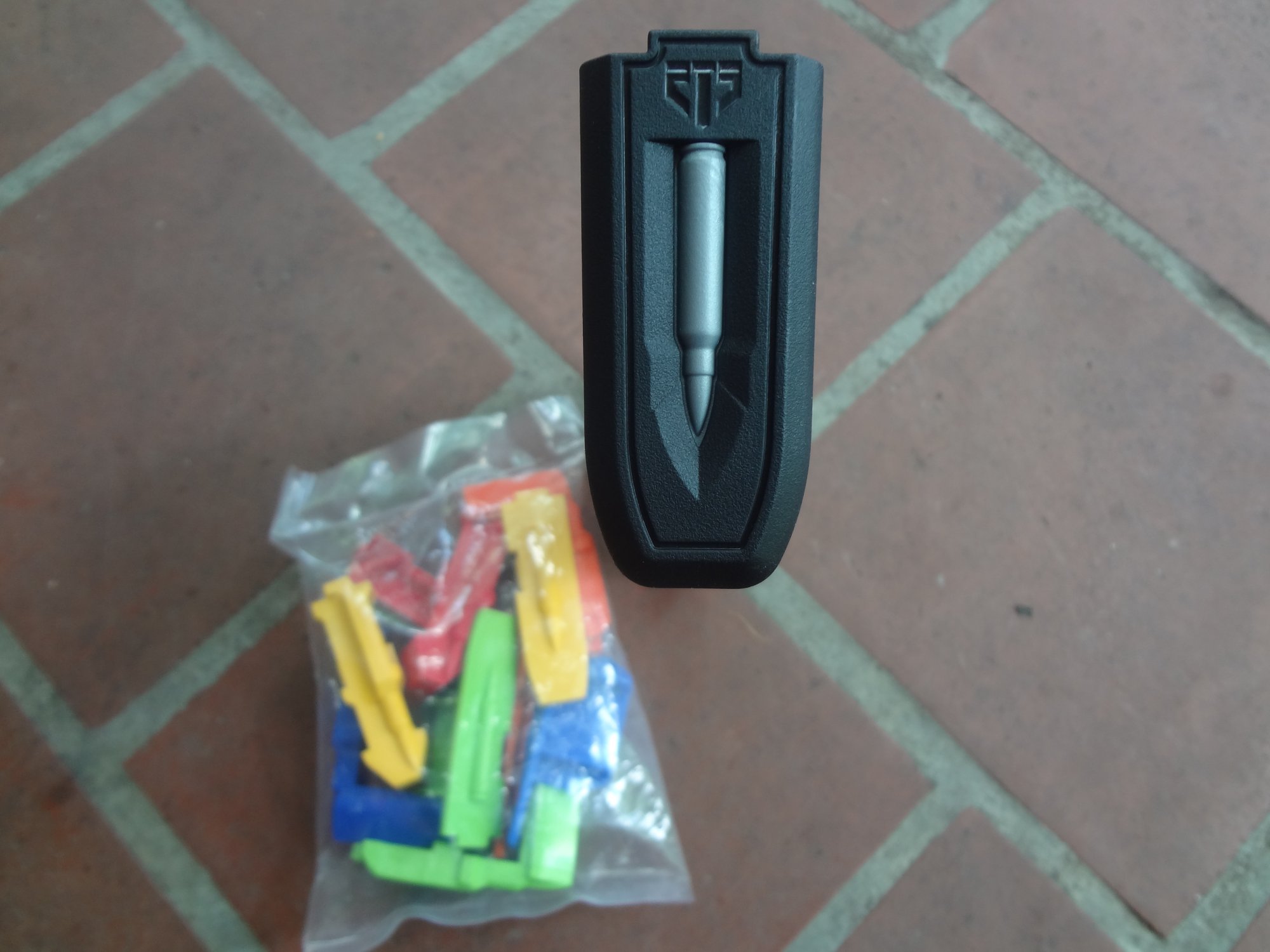 Elite Tactical Systems Group offers colored followers and floor plate inserts. These could be used as a handy way to identify different types of ammunition you have loaded, or if you just want to match the colors to your 3-Gun race rifle. 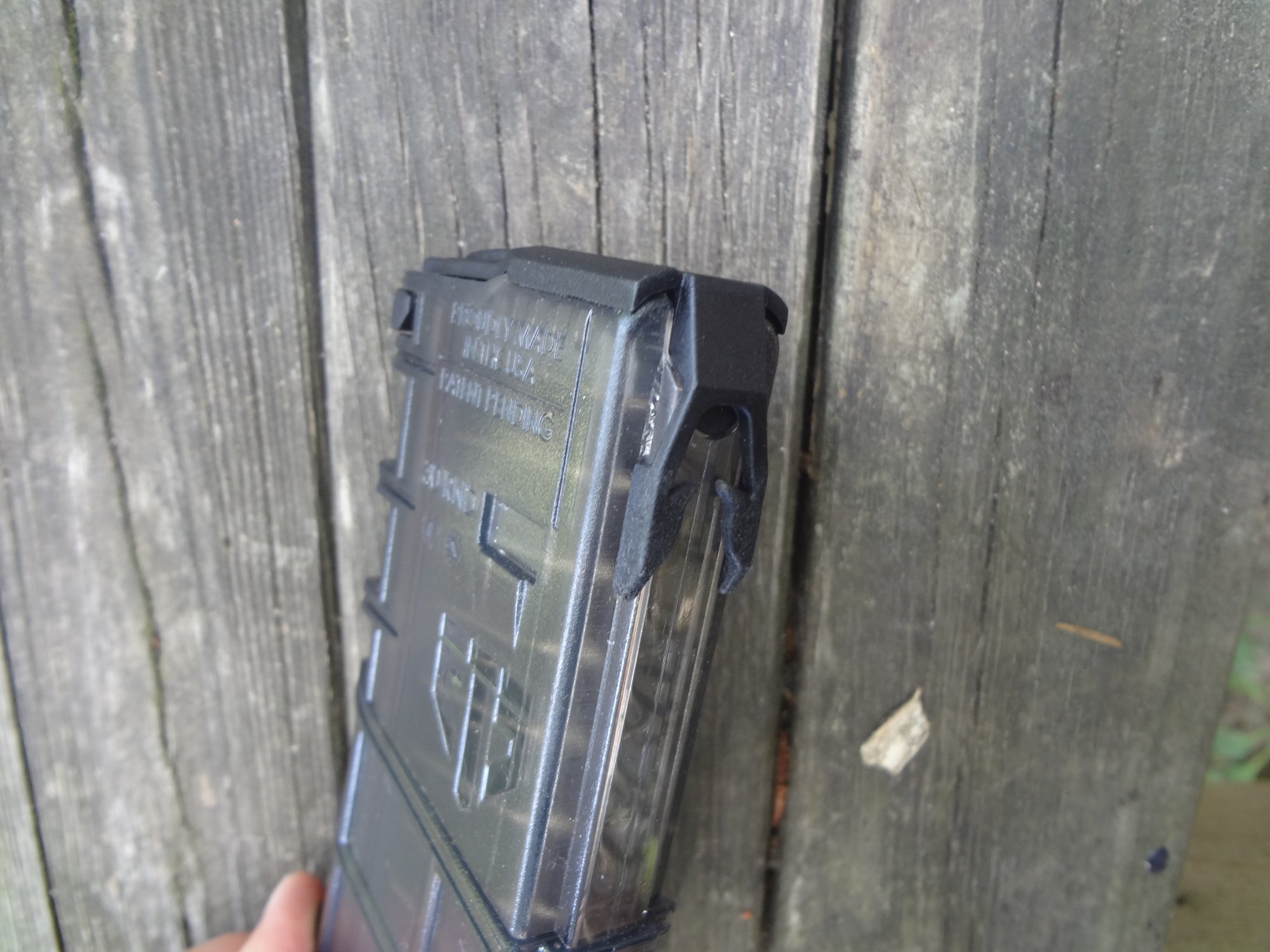 All ETS magazines come with a magazine cap, unlike Magpul mags. However, on this one, once you take it off, it cannot be hooked onto the bottom of the magazine.

While not a major issue, the one thing I found I did not like with the ETS AR Mags is that they did not work with any of my rifles that have an Arredondo AR Magwell (flared magwell extension/mag funnel) mounted on them. The problematic issue is the area around the mid-section of the ETS Magazine(s). Right where the magazine seats in the magazine well, there is a raised portion around the mag. I guess the purpose is for an overstop lip/ridge to prevent you from maybe jamming it in too far on an open bolt. Because of this rim around the magazine, it will not seat with the Arredondo AR Magwell.

Again I do not think this is a major issue, just something that will be an issue for a small percentage of shooters out there that use this particular accessory, (mostly competitive 3-Gun shooters and those involved in other action shooting sports).

Editor’s Note: DR has spoken with Jim Hansen of ETS on this issue, and they are currently developing a new variant of the ETS AR Mag(s) that does not feature the raised lip/ridge that’s causing the interference with the Arredondo AR Magwell. 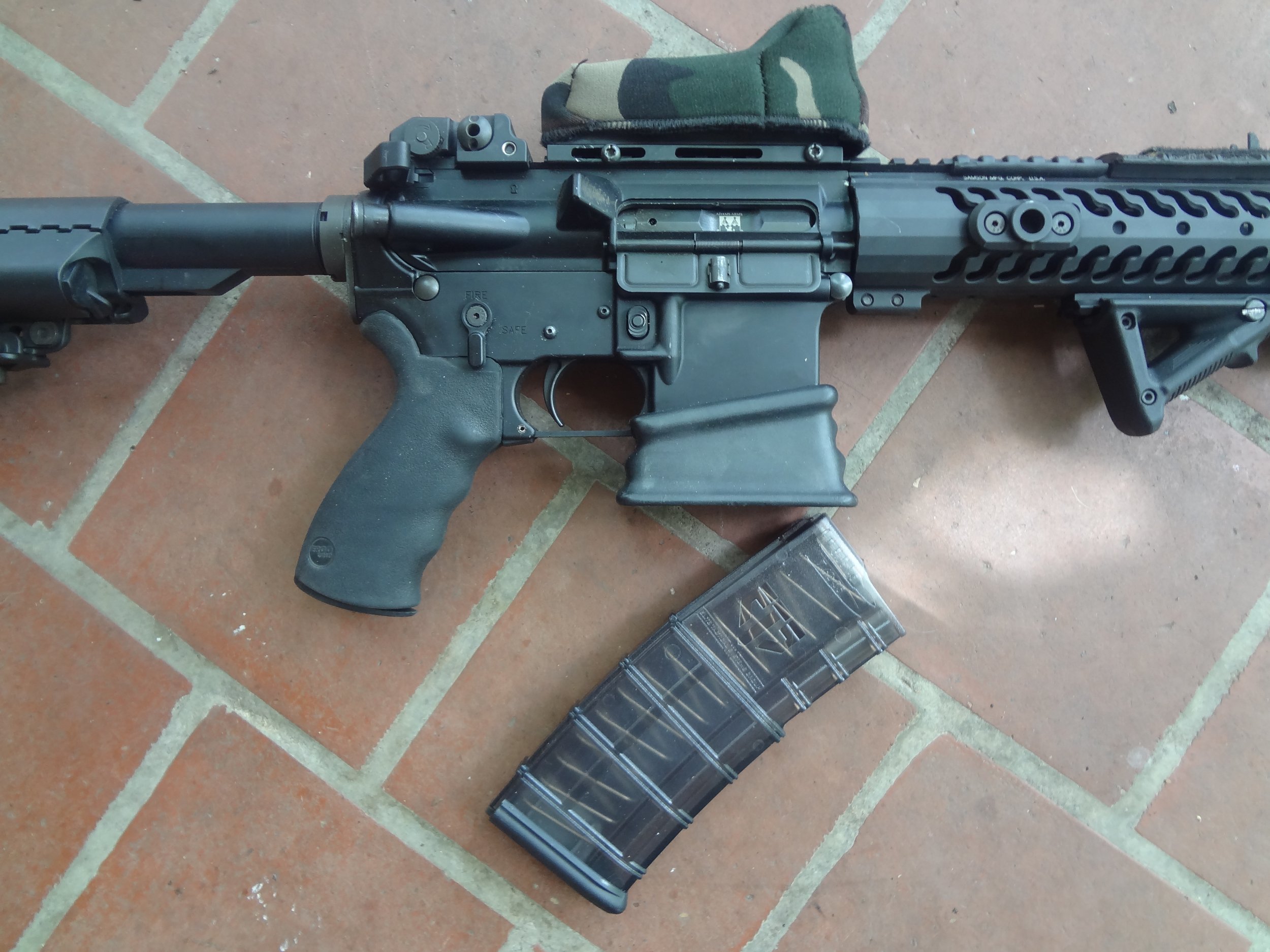 In terms of the amount of different magazines being offered at present, like the AR market, the magazine market is also flooded right now with numerous manufactures offering different types of AR mags. What separates ETS Mags from the rest is that they offer a capability that I feel has been long overdo here in the U.S. shooting community; that is the ability to attach together without the need for any accessories to do it. For that reason alone, I think ETS AR Magazines are very much worth a serious look, aside from their reliability, which I’ve personally experienced. So if you are in the market for some new magazines for your AR, I recommend giving Elite Tactical Systems Group ETS AR Magazines a try.

Editor’s Note: ETSG is currently developing a translucent polymer high-capacity 9mm Glock Magazine, which should be going into production very soon, in June (2015).

© Copyright 2015 DefenseReview.com and Jeff Gurwitch. All rights reserved. This material may not be published, broadcast, rewritten or redistributed without receiving permission and providing proper credit and appropriate links. If you are reading this article anywhere other than DefenseReview.com, please email us the website address/URL (where the unauthorized DR article reprint is located) at defrev (at) gmail (dot) com. Thank you.

All photo and video content contained in this article was shot by Jeff Gurwitch and DefenseReview.com, and is copyrighted. Jeff Gurwitch DefenseReview.com owns the copyright on all photo and video content. All DR photos and videos were shot with a Sony Cyber-shot RX100 (DSC-RX100/B) Digital Camera with 20.2 MP (20.2-megapixel) still camera and 1080p HD video camera capability.