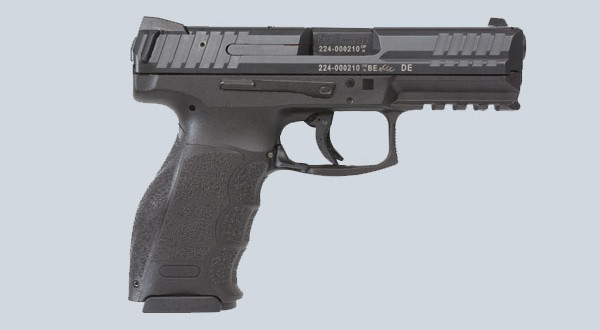 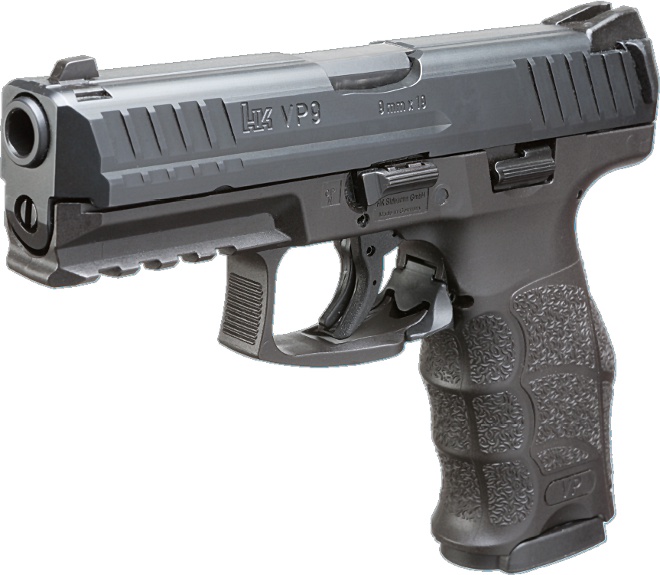 Heckler & Koch (HK) recently released info on the new HK VP9 striker-fired, polymer-framed semi-auto 9mm (9mm Parabellum/9x19mm NATO) combat/tactical pistol, and it looks like, Rob Curtis over at Military Times GearScout was the first one on it, along with data. So, it looks like HK’s finallly gotten its act together and released a modern striker-fired, polymer-framed high-capacity pistol to compete against the Smith and Wesson M&P series and Glock pistols. It’s about friggin’ time, and, in our opinion, has come WAY later than it should have. There’s really no excuse for it to take this long, other than HK (and possibly German) stubbornness.

In DefenseReview’s(DR) opinion, HK took a real step backward from the beautifully-made striker-fired HK P7M13 squeeze-cocker 9mm pistol when they went to relatively high-bore-axis hammer-fired pistols like the HK USP, HK45/45C and HK P30 pistols, polymer frames or not. The gas-piston-driven HK P7M13 is death-and-taxes reliable and has an even lower bore axis than the Glock 17, Glock 19 and S&W M&P9 series pistols. Speaking of the P7M13, the HK VP9 features a P7-type firing pin cocking indicator at the rear of the slide. Yes! Thank you, HK! Nice touch. God, I’ve missed that feature. 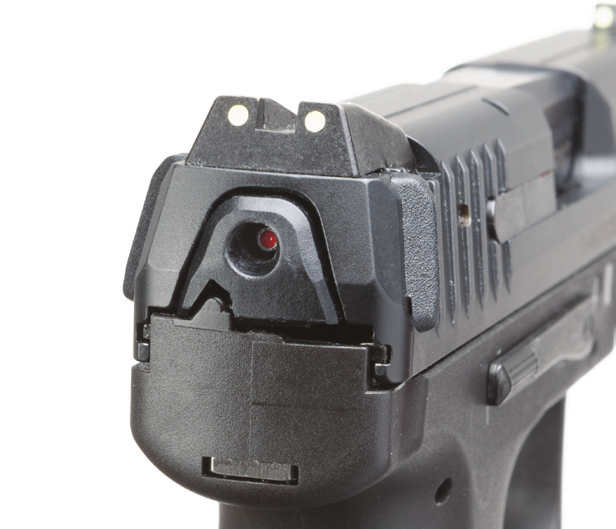 Editor’s Note: Understand that the HK P7M13 was your humble correspondent’s first carry gun (before going to the Glock 19, which is still my carry gun, at the moment), and I’ve owned several over the years. In fact, it was the first pistol I ever bought, and I bought it while I was still in college. So, I’m very familiar with all the P7’s aspects and attributes, including how to quietly decock it. Anyway, if the VP9’s red indicator is visible, the gun’s cocked. Not visible, not cocked. Simple. DR just wishes the VP9’s firing pin assembly were fast-removable/replaceable, i.e., quick-detach/quick-attach (QD/QA) without tools, just like the P7’s. The P7’s QD firing pin assembly was arguably the coolest (and most elegantly and brilliantly designed) capability on a combat/carry pistol ever.

Better late than never, though. DR likes the the VP9’s patented “charging supports” for one-handed reloading in combat (if one suffers an injury, for example) and enhanced purchase, generally, provided they don’t snag or cause any discomfort during concealed carry (CCW), but we probably would have replaced HK’s signature sweep-down ambi mag release levers/buttons with standard/traditional push-button mag release buttons for the purpose of reloading speed and manual-of-arms/training compatibility with most tactical and competition pistols in current use. We therefore hope HK offers traditional mag release buttons as an option in the future. Knowing them, though, probably not. The HK VP-9 also sports ambidextrous slide release levers.

Defense Review also hopes that Heckler & Koch offers an upgraded version of the HK VP9 that integrates a red-dot combat optic, similar to the Smith & Wesson S&W M&P Pro CORE (Competition Optics Ready Equipment) and Unity Tactical UT ATOM Glock Slide/Adapter Plate System. The UT Adapter Plate system enables the end-user to mount any mini-red-dot glass combat optic on the gun he/she wants, and is a really slick little solution. We also hope a sub-compact model, or at least a more compact model with a shorter grip (HK VP9C?) that perhaps only carriers 11-12 rounds in the standard mag, is offered in the future. Oh, and a 20-round or 21-round high-capacity 9mm mag (whichever capacity level works best) for the VP9 series guns would also be a nice option. A Glock-like 2-round-extension magazine butt plate would be welcome, as well. Just one thing though: the VP9’s P30-like grip does seem a bit on the long side for a 15-round compact carry pistol–you’d think they could get a 17-18-round mag to fit flush in it–but we’ve only seen photos, so far. We’d need to actually get our hands on it to make a valid judgement on that aspect. We have handled the HK P30, though, and we found its grip comfortable and ergonomic. 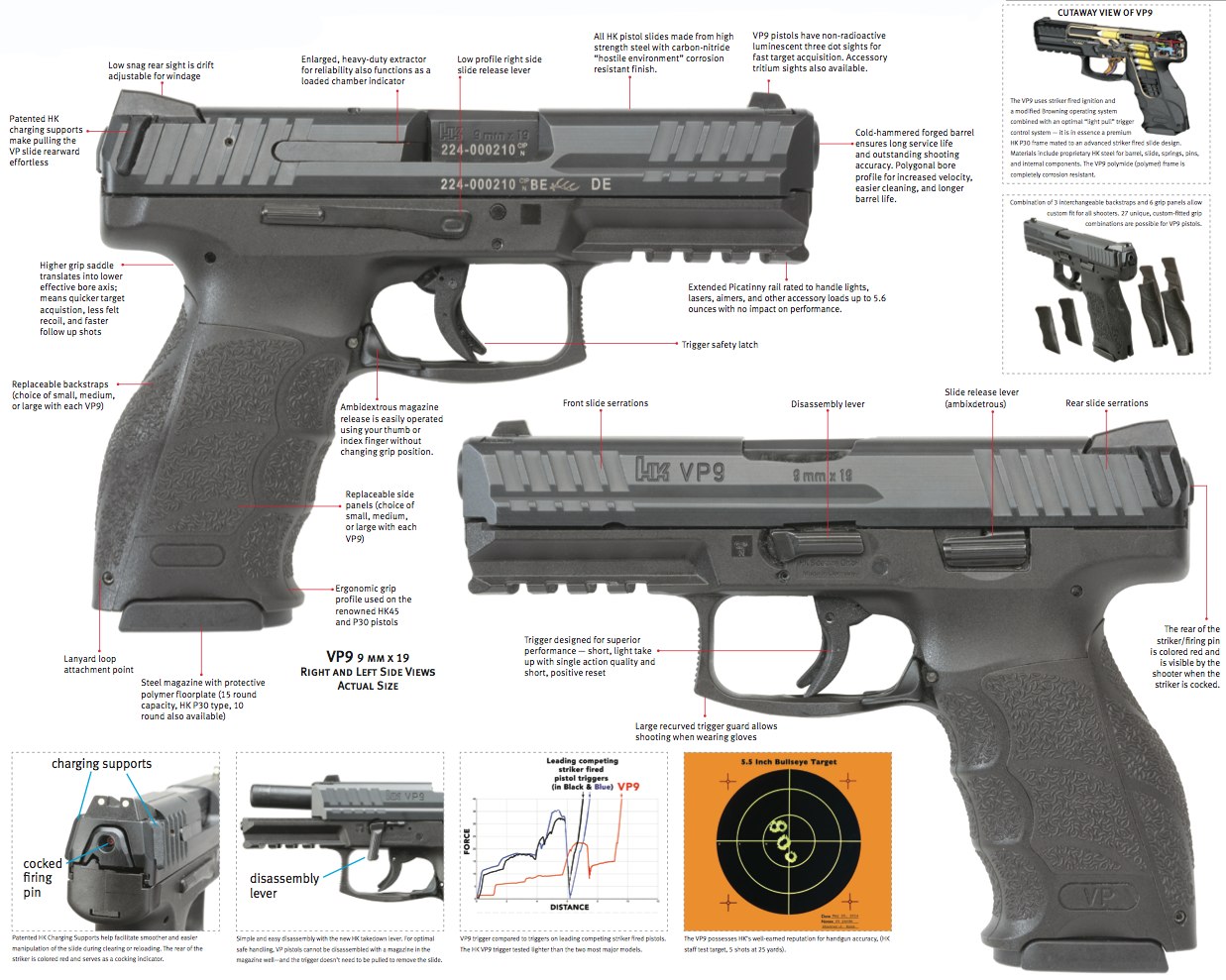 DR just talked with an industry contact of ours, about the HK VP9 pistol, and he’s very impressed with it, saying “I think this going to finally be their breakthrough pistol.” He goes on, “First of all, the ergonomics are through the roof. Second, is the price point [$719.00 USD],” which he says finally makes HK price competitive with the SIG SAUER P226, Smith & Wesson M&P9 series pistols, and the Glock 17/19 (G17/G19).

However, one of the primary keys to a pistol’s performance is the trigger, and according to our source, the VP9’s trigger is supposed to be terrific. We’ll see. The proof is of course in the pulling, although the VP9’s trigger pull weight is listed at 5.4 pounds (24 Newtons), with a trigger travel of only .24 inches (.24″)/6mm, and reset distance of only .12 inches (.12″)/3mm, which should allow for some pretty fast combat shooting, at least in theory. HK’s polygonal barrels and frame-to-slide fit are usually very good, so the VP9’s accuracy is likely good.

In any case, our source seems to think this gun (HK VP9) could spell some real trouble for Glock and Smith and Wesson, moving forward, as, according to him, very likely solves all the G17/G19’s and S&W M&P’s respective problems, particularly with regard to the trigger and ergonomics, all at a slightly higher price point required to achieve HK quality standards. Again, we’ll see. The proof is in the handling and shooting. DR also wants to see how the VP9 stacks up agains the new SIG P320 striker-fired pistol at the range. That should be interesting, too.

Needless to say, we can’t wait to run one of these (VP9) at the range. It’s lookin’ pretty damn good on paper. And, if our source is right, it’s not only possibly the best all-around modern combat/tactical pistol HK’s ever built, but also quite possibly the best all-around combat/tactical 9mm pistol anyone’s built, ever. Time and testing will tell. Basically, it had better live up to the hype under adverse environmental conditions and high round count, and prove itself reliable, accurate and durable enough for military combat in extreme conditions.

On a side note, Defense Review is a bit disappointed that we weren’t told about the HK VP9 pistol by the HK guys at NDIA SOFIC 2014 last month, since we stopped by their booth and had a nice brief conversation with them. That’s not so great.

Update 6/13/12: “Sam” over at Sam’s HKs somehow managed to get his grubby little paws (we mean that affectionately, of course) on a VP9 product sample (bastard…sorry…still affectionate), and he’s written a nice “first impressions” handling review of it, so check it out when you have a few minutes. It would seem HK likes Sam better than us. In HK’s defense, Sam has dedicated his site to their brand/products, so whatevs. Sam’s piece is worth reading. Now, we’re just waiting on his range test.

The following is a modified/edited version of info directly from the HK VP9 pistol data sheet, courtesy of Military Times GearScout:

“Experience gained by HK engineers with the recent P30 pistol had a direct influence on the design of the VP9, but the VP9 breaks new ground with its integration of a unique striker firing system with an enhanced HK “light pull” trigger. The net result is trigger quality unequaled in any production striker fired handgun.

HK pioneered the first striker fired handguns, producing both the VP70 and P7 series, designs that impacted several models by HK competitors. But a superior trigger has eluded most striker fired pistol designs.

The VP9 trigger surpasses those found on competitors. It has a short, light take-up with a solid, single action type break followed by a short positive reset.

The VP9 trigger has a consistent pre-travel pull with a positive wall/crisp break. Typically, striker fired guns have a pre-travel pull that increases in weight as you go through the trigger stroke. With the VP9, you have a less than noticeable pre-travel pull until the trigger reaches the engagement point of the fire control parts prior to trigger break.

The VP9 uses HK’s ergonomic handgun grip design that includes three changeable backstraps and six side panels— accomodating all hand sizes. Molded finger grooves in
the front of the pistol’s grip also instinctively position an operator’s hand for optimal shooting. Only HK handguns have such a customized grip.

Although influenced by other HK models, the VP9 has all the hallmarks of the latest, state-of-the-art handgun. All controls are completely ambidextrous. Slide releases are present on both sides of the frame and the magazine release can be easily activated by left- or right-handed shooters.

A new feature is HK’s patented charging supports — simple components that are mounted on each side of the rear of the slide and provide better gripping leverage for racking the slide rearward. The charging supports speed reloading and make operating the VP9 easier for shooters with reduced hand strength. The VP pistols uses the proven P30 steel magazine; 15 and 10-round capacity available.

The VP9 has an extended Picatinny MIL-STD-1913 rail molded into its polymer frame for mounting lights and accessories. The rail has been tested and certified to handle mounted accessories up to 5.6 ounces.

The VP9’s machined steel slide is protected from corrosion and wear by HK’s hostile environment finish and all metal components, including springs and pins have superior metallurgy.

VP pistols are made in Heckler & Koch’s Oberndorf factory in southwest Germany. The VP9 is well-suited for civilian sport shooting, security, military, and law enforcement use.

The VP9 Pistol…thoroughly tested and ready for you.

HK has earned the respect and admiration of the world’s most elite military and law enforcement operators through its “no compromise” commitment to firearms innovation and performance.

But what really makes an HK pistol different from other pistols? Maybe the fact that Heckler & Koch maintains the most thorough testing regimen for new products in the firearms industry.

Little known outside of Heckler & Koch facilities and offices throughout the world is a highly structured HK testing program that strictly follows well-established company protocols and procedures.

Under development for more than four years, the HK VP9 has been subject to just about every test imaginable — NATO AC/225 and U.S. NIJ drop tests, water, dust, mud, and sand tests that duplicate the most extreme environments and harshest operational conditions in the world.

During these tests — accuracy, wear, and tolerance readings are taken to establish the capabilities, performance, and realistic service life of the new VP9 pistol in all environments.

Unlike some manufacturers, HK test fires all VP9 pistols for accuracy, function, and proofing (for international and German industrial certification) before they leave the factory.

This passion for testing is just one more part of what separates HK from the pack.

Heckler & Koch HK VP9 Striker-Fired, Polymer-Framed 9mm Combat/Tactical Pistol with Ambi Controls: Better Late than Never…But is it Better than the Glock 17/19 and Smith & Wesson M&P9 Series Pistols? It may be, but we’ll just have to see. (Video!) by David Crane