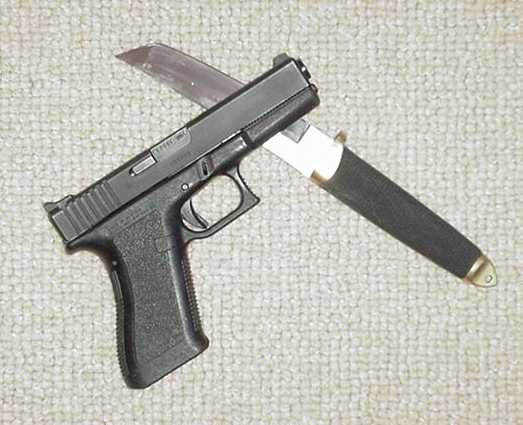 Images of third world jungles flash through your mind as you and your partner
search the overgrown wooded freeway embankment. The sweat pours down your face
as you move ghostlike through the bush, as you search for the would-be killer.
Your sweaty hand tightens around the light-equipped Glock, as you remember the
victim’s severed ear lying on the asphalt. His spoken description of the
suspect, in a mix of caribbean spanish and horror, was poor as the paramedics
worked feverishly to stop the bleeding. But you do remember one word standing
out as clear and sharp as a shard of broken glass through a bare foot.

Your other hand is holding the steel expandable ASP baton, illegal by department
regs (just too harsh looking, you know), but essential for this mission. You
carry it high, near your neck, prepared to block an unseen attack in the green
darkness ahead.

The minutes seem like hours as you move slowly, cover inches in minutes, all the
while taking pains to be silent and to listen. The lingering humidity from a
recent rain makes breathing difficult, but it makes your steps silent. But sound
is also the only thing that will give him away in the darkness.

You use the light on your pistol sparingly. Your goal is to find him, not to
scare him away. Your partner is close behind you, touching your shoulder so you
can communicate by body feel, without words. Slowly, trying not to breathe, you
inch forward, hunters trying not to be hunted.

Then you sense something up ahead. Later, you will rationalize you saw
something, but the darkness makes this impossible. Its your guardian angel
gently whispering in your ear, "Be careful, now."

Something’s there, in the darkness. You stop, straining your eyes to see, but
they fail your commands. You dare not use the light…not yet. Your partner, his
mission being to cover your back, stops also. He can feel your tension, and
being equally experienced, dares not speak.

Then you see it. You can’t tell if it’s a man or a tree in the darkness, but
something is there. Close! Then it moves.

Its coming toward you now! Running! Your little angel’s voice is screaming
now, "LOOK OUT!"

Ask any graduate of our modern shooting schools, or a police officer about what
they would do in a fight, and I’ll bet you get some memorized speech about how
they would draw their pistol, and solve the problem with the "school-approved,
police-chief-sanctified, doctrinally-correct solution". The bottom line is that
most police officers, civilian shooters, or other gun-people, rely far too much
on their firearms in combative encounters. If all you have is a hammer,
everything looks like a nail.

Certainly, there are times when nothing but a good shot to the head will solve
the issue, but at other times, you will not have such a clearly discernable
situation at hand. For this reason, we train heavily with the concept of
Integrated Force. Integrated Force (IF) involves bringing the entire fighting
big-picture together so there is a seamless ability to fight, and to transition
from one level or environment to the other. Here are some examples:

There may be a need to escalate from a contact, chemical, or edged weapon to the
firearm. You may have a baton in hand when there is a sudden need for the
firearm. . 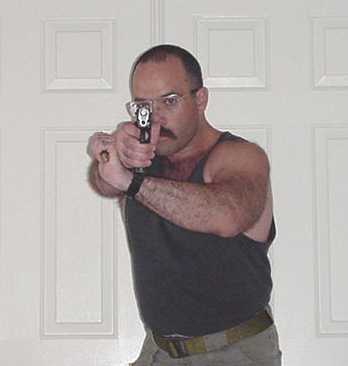 Why ditch the stick when you can incorporate it into the fighting
posture with no loss of efficiency–especially if there are other combatants in
the area that may have to be dealt with, but who should not be shot? This may
also be the case for an immediate response with a more easily accessible weapon.
For some this may mean the blade. Some of my associates who dwell in nasty
areas are fond of palming their favorite slasher/cutter as they walk to their
cars in dark parking lots. Their rationale is they can quickly slash an
attacker, and then go to guns, retaining their blades. The reasoning is that
they can be more low-profile with a blade in reverse grip than would be possible
with the drawn pistol. 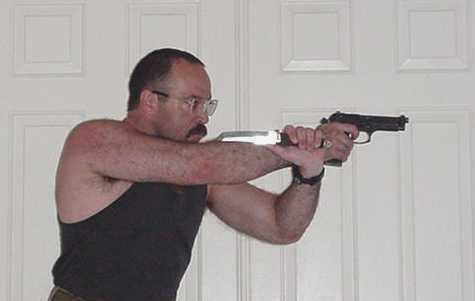 Much the same analogy can be drawn with OC and other
"chemical" weapons.

You may have situations like the one we described earlier. You may
pre-incorporate other options into the fighting platform because of the mission.
Some combinations may be: Pistol and Baton, Pistol and Chemical Weapon, Pistol
and Knife, Knife and Light, Knife and OC, etc. The limits are set by your
mission needs and imagination only.

In the story, the proximity, and likely lethality of the potential contact, and
the fact that the bad guy would get the first swing, indicated we would need to
incorporate something into the fighting platform to buy time in the event we
needed to shoot. That story actually happened. No, the thug didn’t turn out to
have a machete, only a broken beer bottle. Yes, I could have shot him, but I
didn’t need to. And for me, at the time, it was better that I did not. Without
the presence of Integrated Force Concepts in my war bag, I’d have had a hard
time with him, and I may have been seriously hurt. 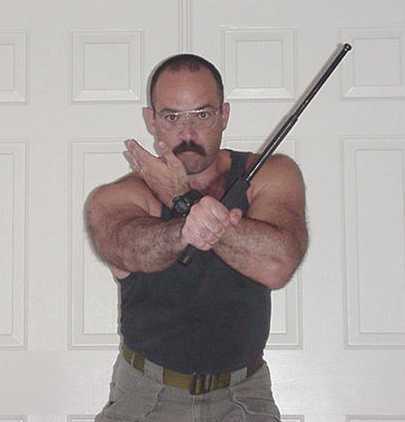 Instead, he went to jail
with a broken jaw via the ASP (I know its not an officially approved ASP target,
but what the heck), and I avoided yet another Department
Shoot-Review-witch-hunt.

The posture used for integration of force is dependant on the tactical
situation. One important thing is mobility – nobody "plants their feet in the
earth and fights" in a real fight, everyone either moves or dies. Another point
is balance – It doesn’t matter how good you are in ground fighting. In a real
fight, if you fall down, you may not get up, so don’t fall down. Balance!
Third, is the ability to absorb a rush. In case your mobility is hampered by
slippery surfaces, debris, or undergrowth (as in our little party), your ability
to absorb the adversary’s physical rush will keep you on your feet and able to
deal with him. 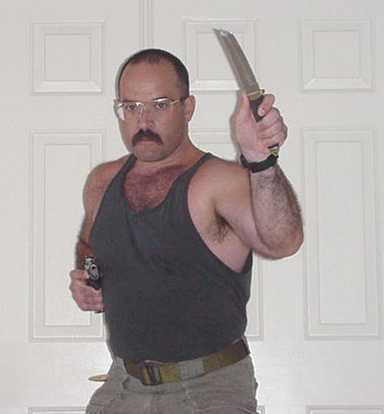 There are two postures that I teach and advocate. They are identical from the
ground up. The feet are pointed forward, with the support side leading. The
body is slightly bladed. The knees are slightly bent for mobility, absorption of
attack, and balance. The hips, knees, spine and shoulders are kept on a single
plane with no twisting or torquing. The upper body may be configured for medium
intervals or close intervals. For medium intervals the posture resembles a
standard Weaver-type stance. The reason I choose this one in lieu of the Pure
Weaver, Isosceles, Modern Isosceles, HK stance, or whatever, is that its is a
better fighting posture. 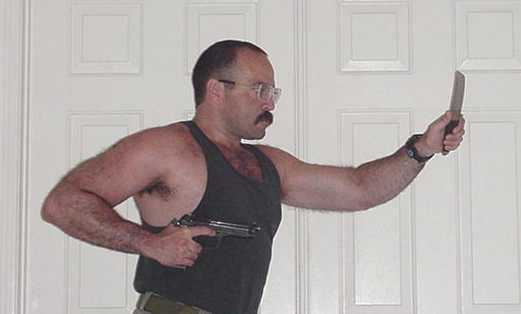 For close intervals (kissing distance), keep everything the same with reference
to the lower body, except for bending the knees more. The pistol is kept close
to the primary side indexed next to the rib cage in the close contact position.
The support hand is positioned to strike or intercept an attack. You may place
it at the primary side shoulder, ready to strike with a bottom-fist type
movement, or block with a rising block type movement. You may also place it
vertically by the support side of your face, if you anticipate an attack coming
from that region. 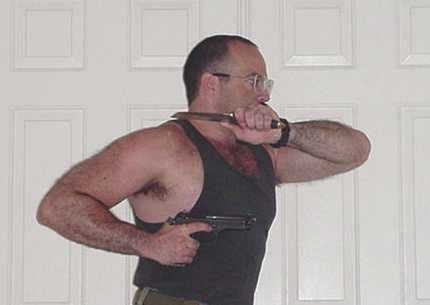 Your trigger finger is off the trigger during any contact unless you mentally
decide to shoot your adversary. The reasons for this are well publicized in
discussions on firearms safety, but in our application, it is even more
important because you may be using the pistol as an impact weapon as well (but
that is another story).

Integrated Force Concepts is a modern solution to the unforeseeable variety of
confrontations that we may face, in an increasingly litigious and anti-operator
society. Keep things simple and minimize your choices as much as is tactically
realistic. Work your options slowly until they become second nature, and you’ll
be better prepared than ever for the "final exam".

About the Author:
Gabe Suarez has served as law enforcement officer for over 15 years, working
SWAT, Undercover, Narcotics, and Gangs. He has been involved in training and
teaching martial arts for thirty years. He conducts training and consulting
for qualified individuals all over the world through Suarez International, Inc.
He may be reached via his website, gabesuarez.com.

David Crane started publishing online in 2001. Since that time, governments, military organizations, Special Operators (i.e. professional trigger pullers), agencies, and civilian tactical shooters the world over have come to depend on Defense Review as the authoritative source of news and information on "the latest and greatest" in the field of military defense and tactical technology and hardware, including tactical firearms, ammunition, equipment, gear, and training.
Previous Gunfighting: The Teuller Drill and Its Applications
Next The Fighting Posture (a.k.a. Weaver or Isosceles — Which is Better?) 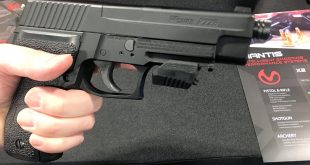