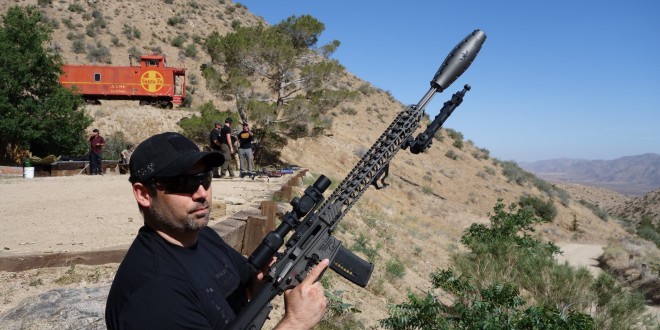 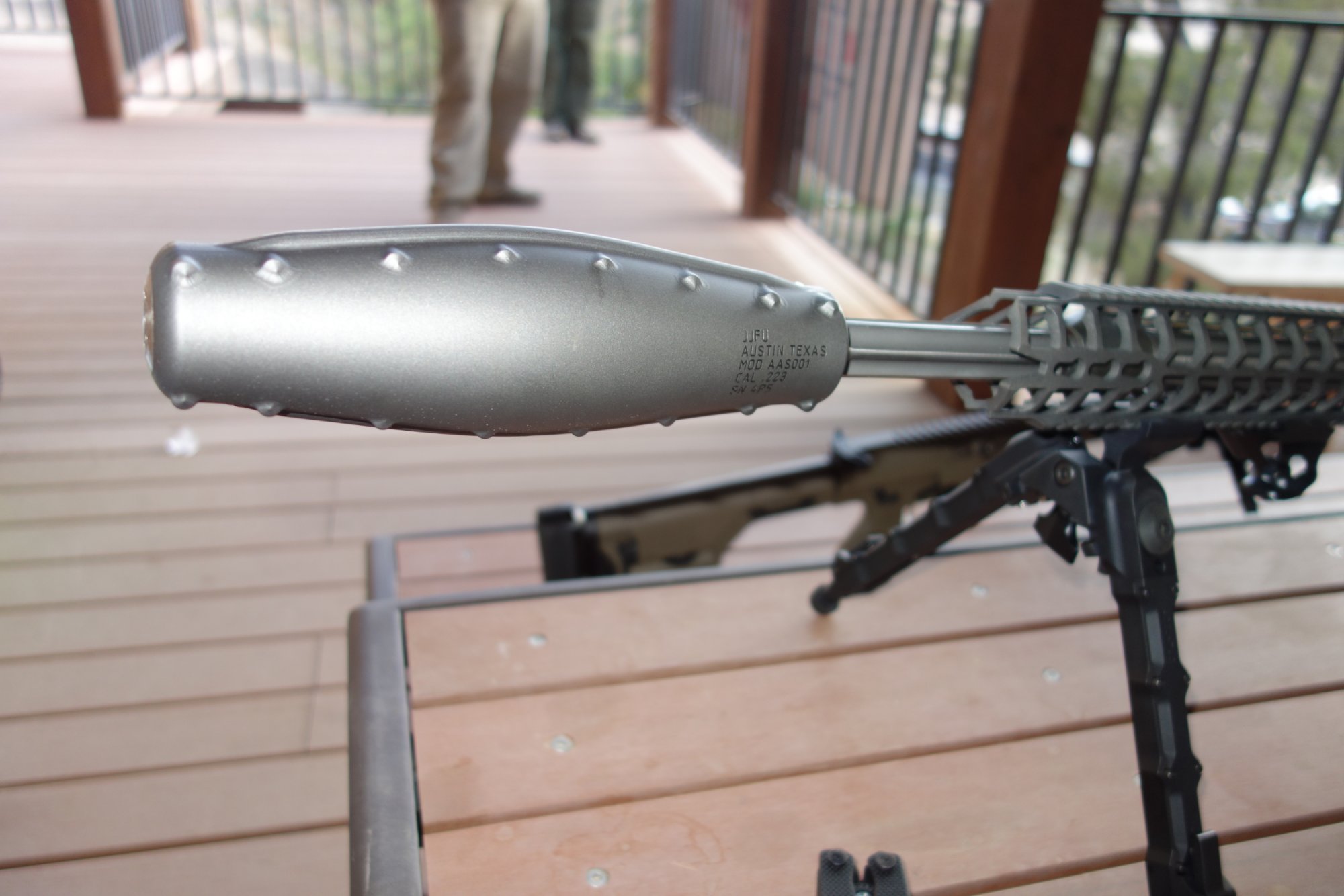 While DefenseReview (DR) was attending the U.S. Optics Academy Long-Range Precision Rifle I course launch/writers’ event in the Southern California high desert mountains, we got the chance to view and run a new 5.56mm NATO (5.56x45mm NATO)/.223 Rem. suppressor that really impressed us, or, blew us away (pun intended), if you will. It’s called the Aero-Sonic Suppressor, and it was designed and developed by one Jesse James of Jesse James Firearms Unlimited (JJFU), who’s now gotten into custom tactical firearms manufacturing and building in a very big way. Everyone of course knows James from the custom bike (motorcycle) and car world, but what they may not know is that he’s now building some very interesting custom rifles, pistols and muzzle cans (silencers/sound suppressors), and the Aero-Sonic Suppressor would appear to be the single most interesting and innovative product of the bunch. 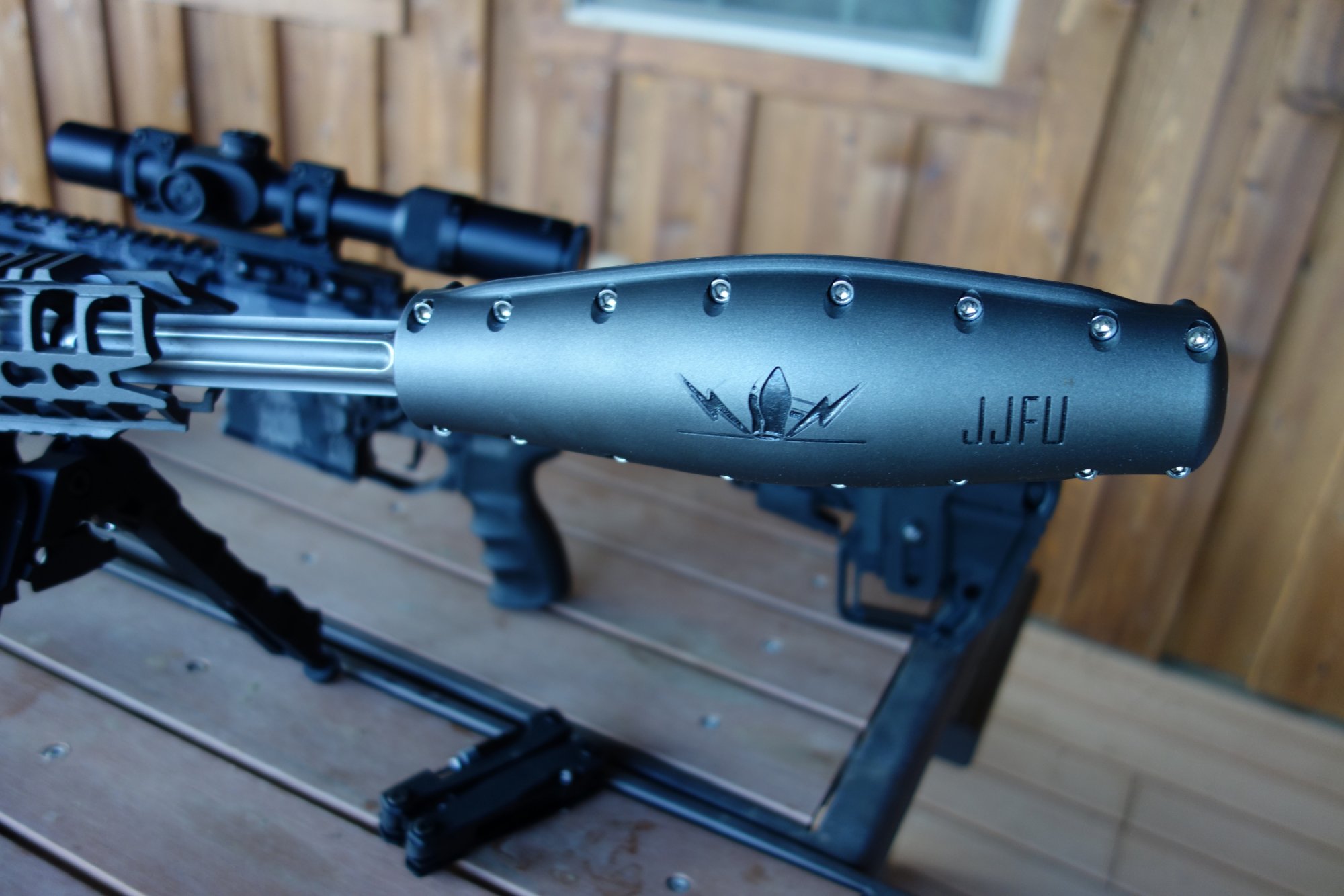 When we first saw the JJFU Aero-Sonic Suppressor, DR wasn’t quite sure what to make of it. It just didn’t look quite right to us. It’s got an organic squash/gourd-like look to it, and we first mistakenly thought that it’s design aesthetic might be a gimmick. It’s not. As we would soon learn, every aspect of its design is purposeful and functional, and it incorporates and integrates four (4) patents, which cover its overall design, pressure release aspect , internal baffle design, and (we think) its screw-secured split disassembly design that allows the end-user to unscrew it along it’s length and pop it open for easy cleaning and maintenance. Over the course of the two-day event, the Aero-Sonic’s design aesthetic grew on us, um, kind of like a squash, and we started to like it, perhaps because we understood that just about everything about it was functional. Editor’s Note: DR will try to obtain some hi-res photos of the Aero-Sonic’s internals and include them in this article ASAP. 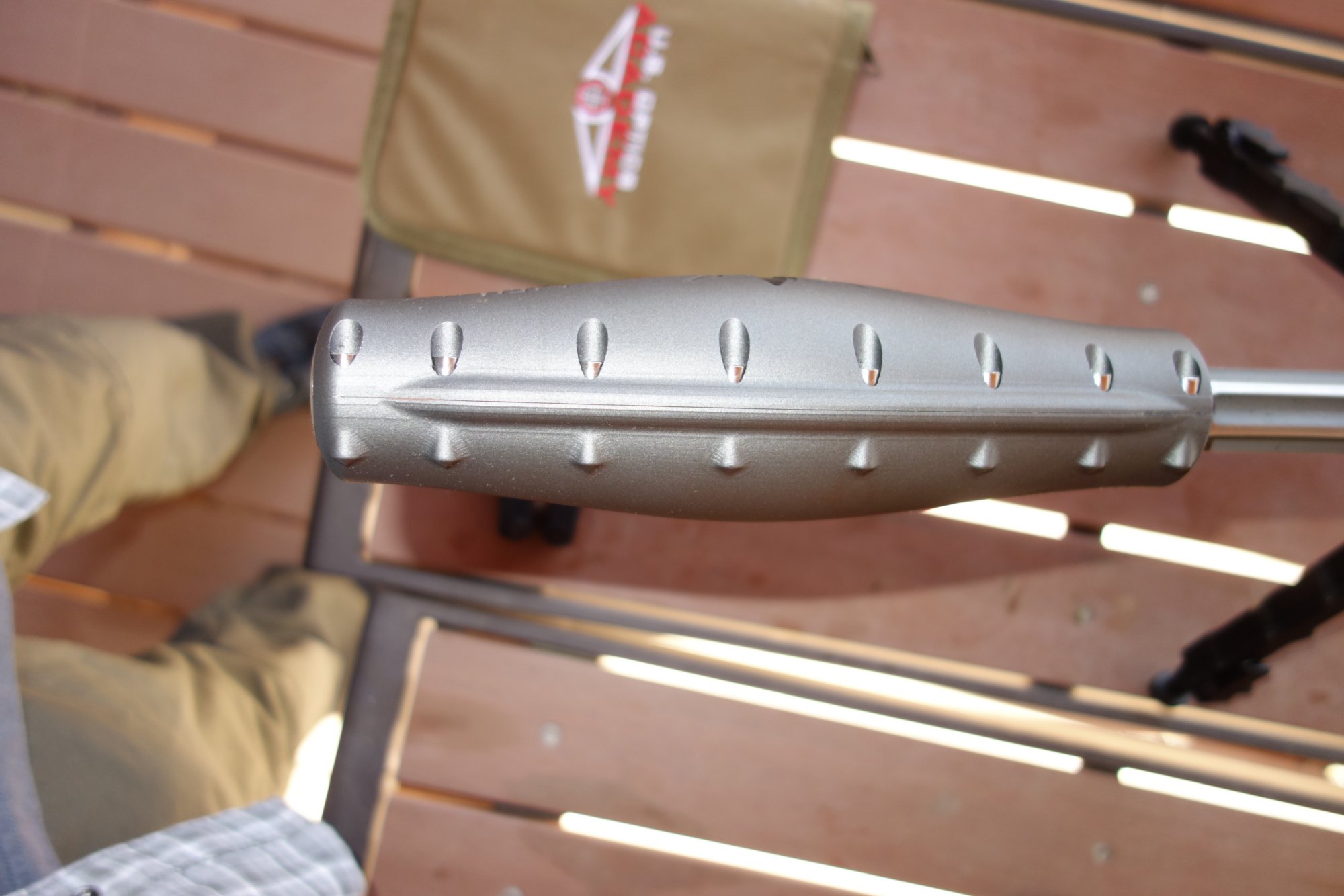 The Aero-Sonic’s pressure release aspect is the most aesthetically obvious aspect, since it’s what creates the bulge in the center. It’s Defense Review’s understanding that James got the idea from auto mufflers or exhaust, but we’ll have to confirm this. The internal baffle system is also very innovative, and comes from the high-speed bullet train world, of all places. James got the idea from reading about a patented system for eliminating the ‘tunnel boom’ created by high-speed trains in Japan as they enter tunnels. The Japanese had to figure out a way of eliminating ‘tunnel boom’ at the exit point of the tunnel when a high-speed train entered it. James wondered if he could apply that system to supressors, and as it turns out, he could, and did. Since the Japanese patent only applied to trains, James was able to apply for a patent on the system for suppressors.

When you include the Aero-Sonic’s full-length screw disassembly design, you end up with what is in DR’s opinion the most innovative suppressor design since Operator Suppressor Systems (or OSS, formerly known as Bravo 18). 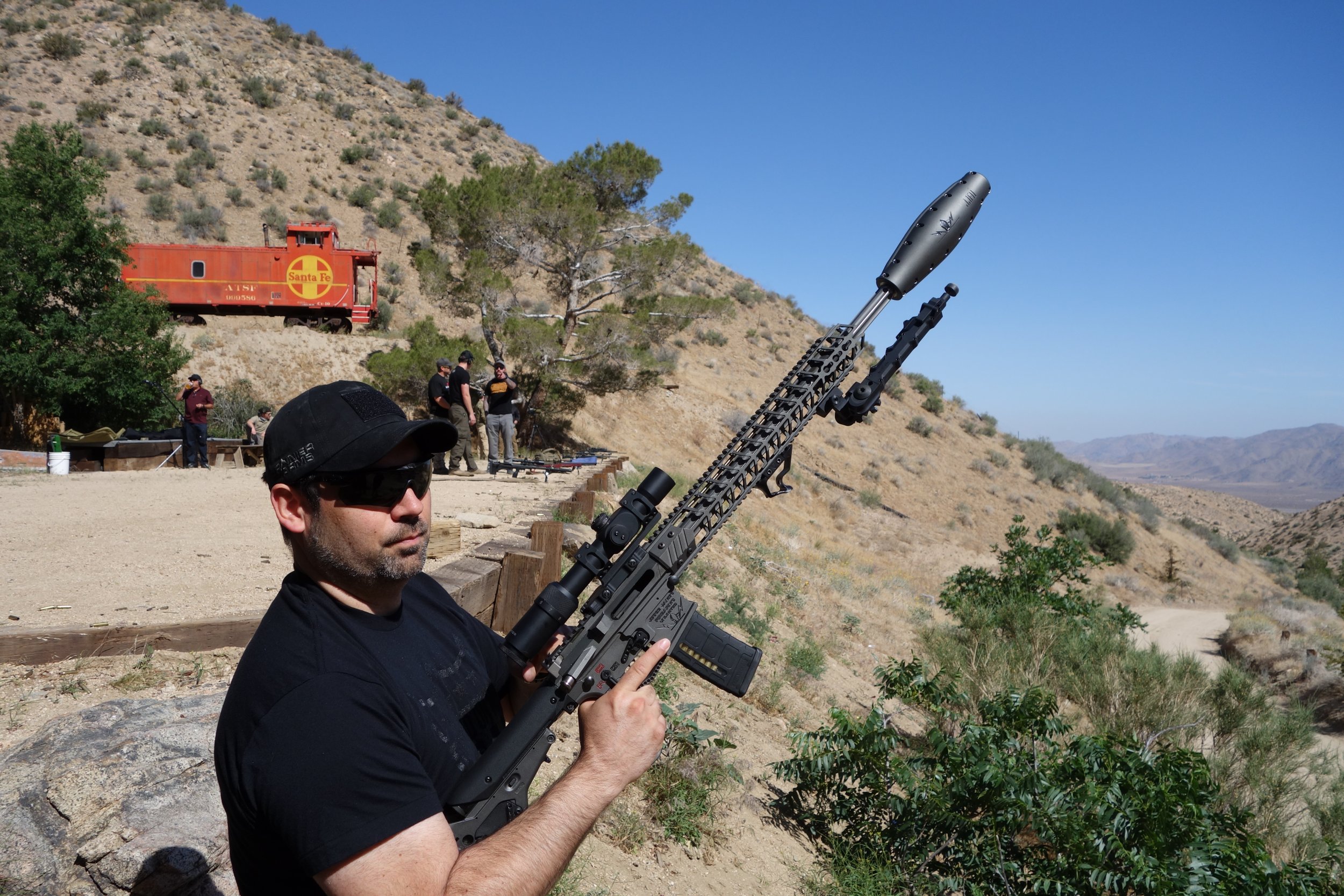 But, just how quite is it? As it turns out, the JJFU Aero-Sonic Suppressor is really quiet, impressively quiet. Every shooter that tried the new can (muzzle can) out was impressed with its level of sound suppression. You can get a little bit of a feel for how quiet it is from watching the videos we shot of it being run at the range (see below). Another impressive aspect of the AeroSonic is its ability to stay relatively cool versus traditional cans. Sound suppression is of course important, but durability and POI (Point Of Impact) shift are also very important. When we inquired about the former, James told us that that another Aero-Sonic he’d built was able to 20,000 rounds of full-auto fire, and the one we were running on semi-auto at the U.S. Optics Academy range had already had about 10,000 rounds put through it. James told me he’d started out with titanium baffles, but switched to Inconel for durability/longevity.

DefenseReview will try to get some point-of-impact shift data on the Aero-Sonic, ASAP.

We should note that the Aero-Sonic Suppressor we ran (and watched others run) was mounted on a JJFU Nomad AR-15 custom tactical AR rifle/carbine that ran like a top during all the shooting we witnessed. DR liked the design aesthetic of both it and the JJFU Nomad 10 AR-10/SR-25-type 7.62mm NATO (7.62x51mm NATO)/.308 Win. tactical rifle James used for the U.S. Optics Academy long-range precision rifle course.

We should also note that the Aero-Sonic’s a bit pricey, coming in at $4600 USD, but James argues that it’s still a very good value, considering its significant performance and durability advantages it enjoys versus competing suppressor designs. 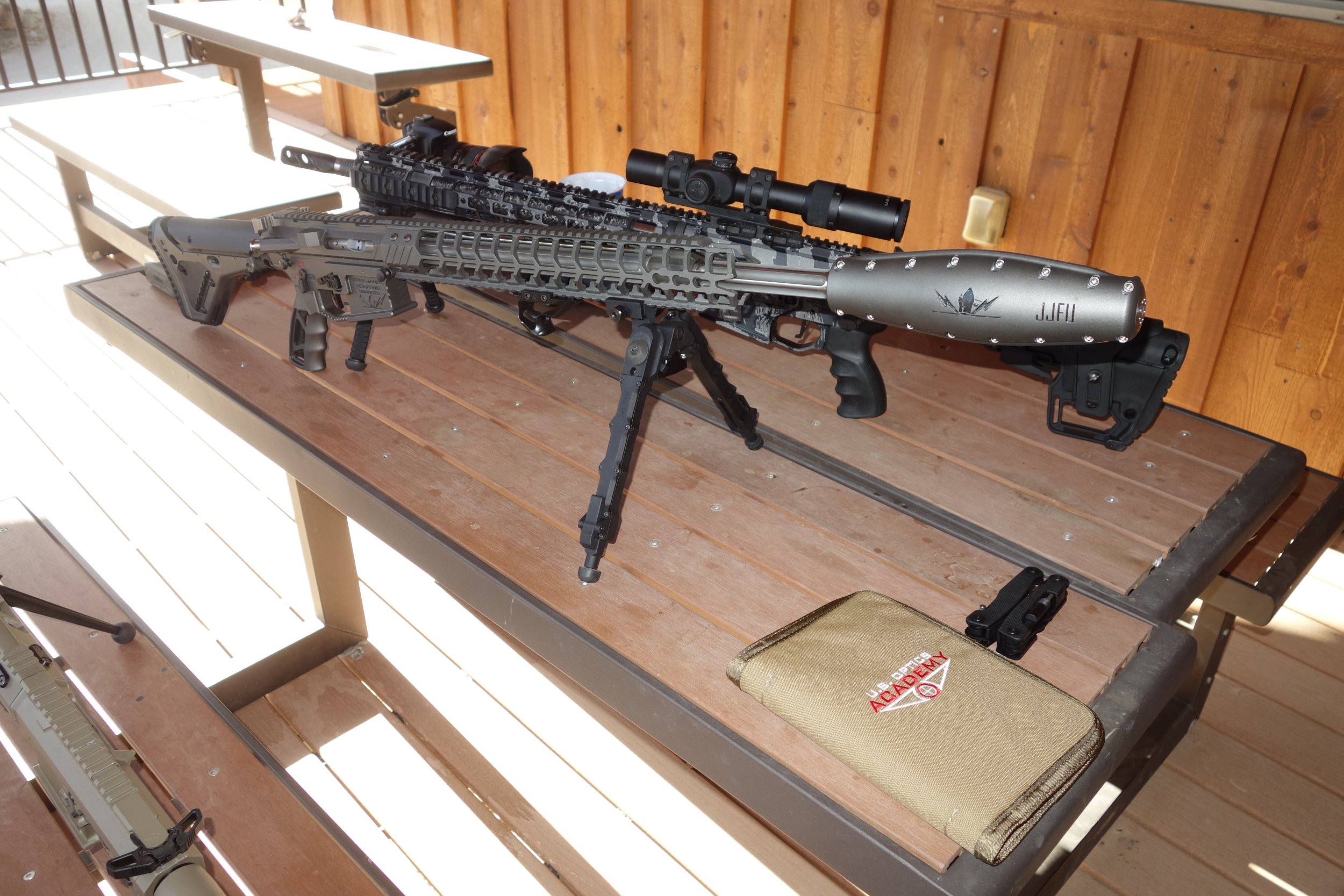 The following information on the Aero-Sonic Suppressor comes directly from the JJFU website: 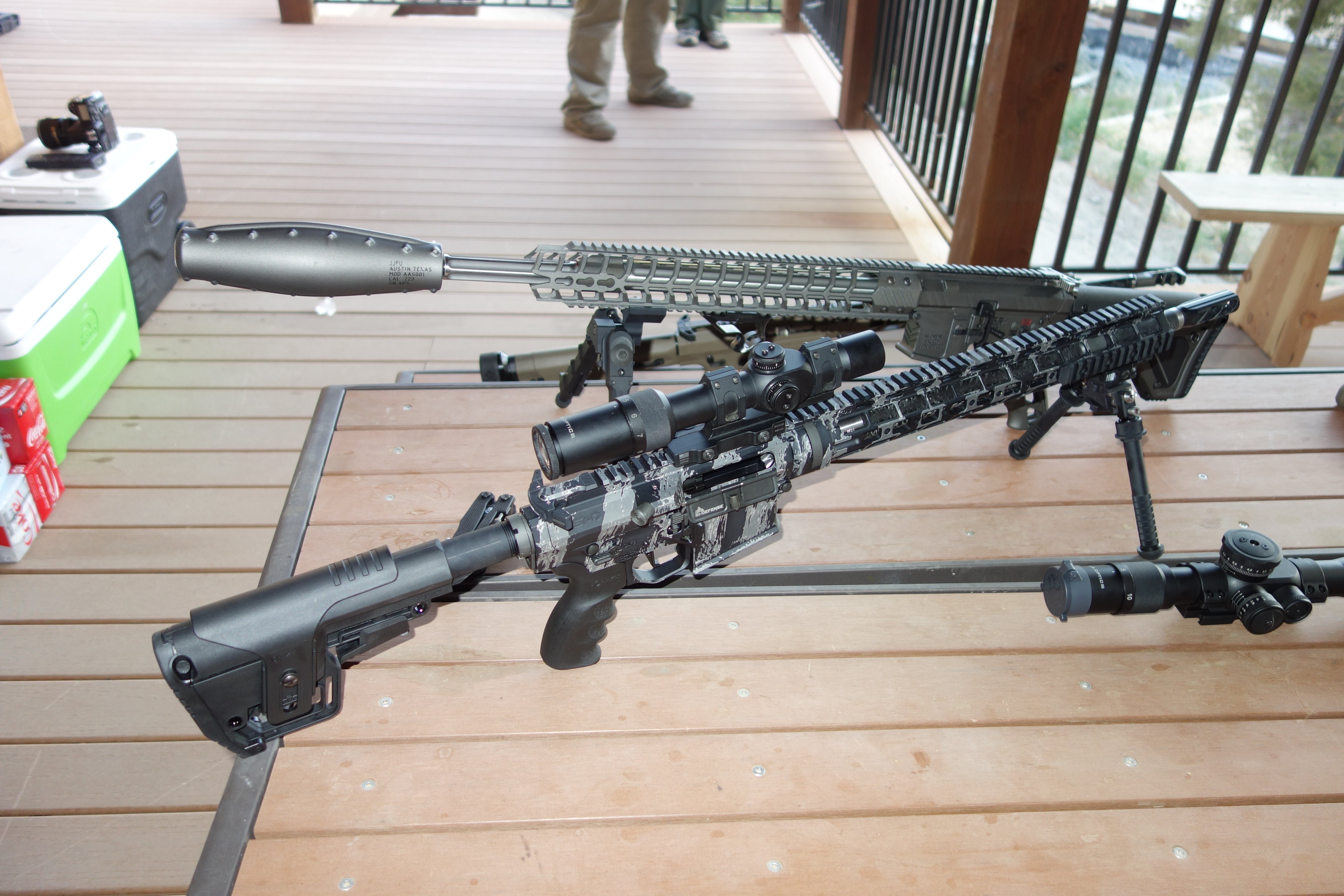 “The Aero Sonic’s un-conventional inner and outer shape and air regulating outer barrel are crucial for reducing high pressure (super sonic) waves. The round enters the suppressor chamber at supersonic speeds, creating uneven, high air pressure waves. These waves translate into sound. We feel that the amount of air that is being pushed by the round is so great that if not addressed it will create a sonic boom at the open end of conventional suppressors. This is why many suppressor manufacturers are now porting the front on the suppressor in an attempt to bleed off air. We have effectively figured out a way to reduce the air pressure as it enters the suppressor chamber, and slow it down in a gentle way, dramatically reducing the sound and eliminating muzzle flash. The result is that we have created a true sound suppressor, muzzle flash eliminator, low signature firing system. 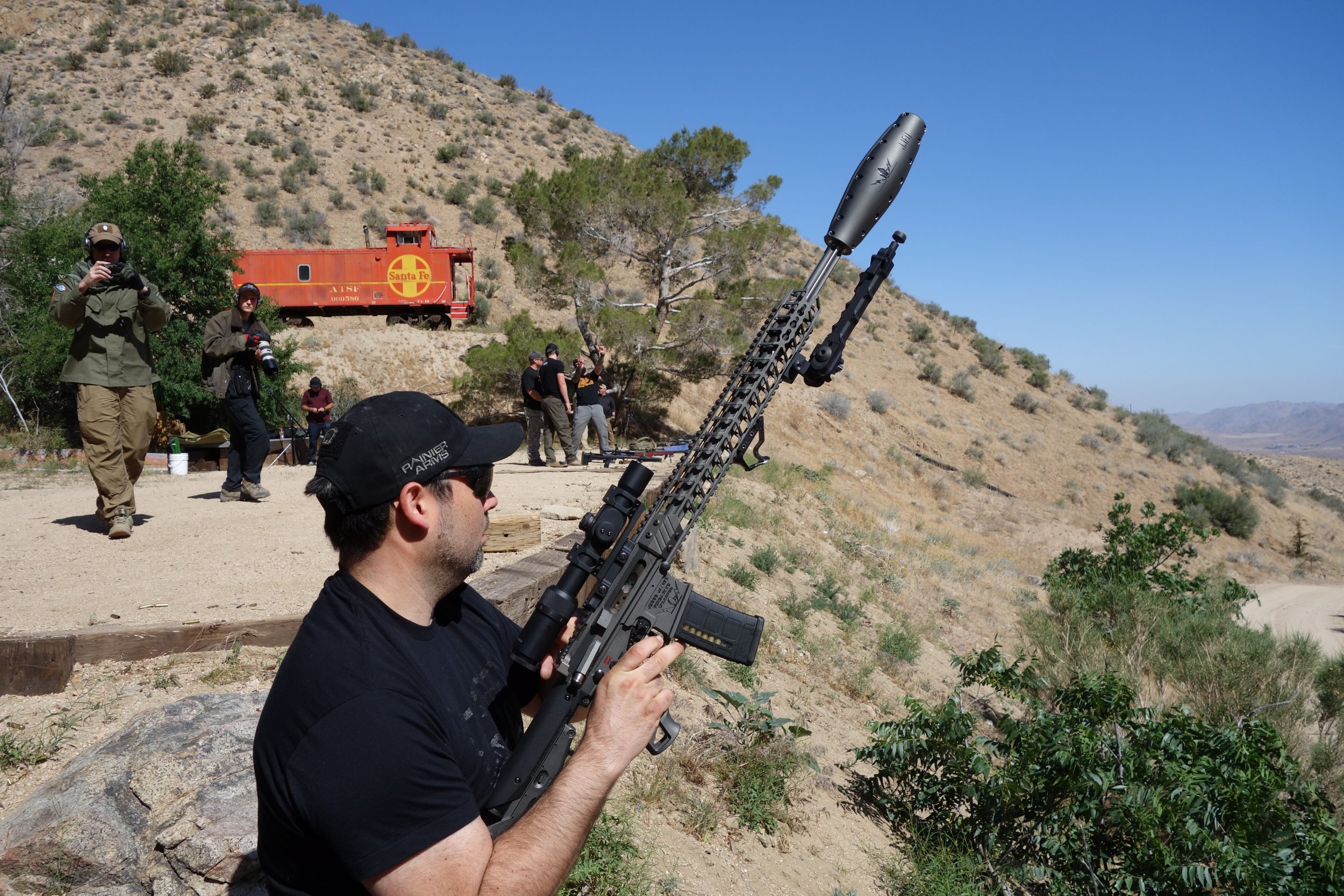 Lowest Sound Suppression The Aero Sonic patented design slows down muzzle pressure by controlling the blast of air as it enters the suppressor chamber. With the muzzle pressure reaching 1500 psi you cannot simply deflect it with hopes of making it quieter. The air pressure must be controlled, and bled off, slowing it down.

Our unique design lets the air expand in the pulse shape of a super sonic sound wave. All internal surfaces are machined with organic curves in an effort to reduce turbulence. Turbulence = Harmonics = Sound. The more gently you can slow down the air, the quieter the results.

Super Sonic air pressure is also regulated with our patented inner barrel design. Pressure relief slots are machined in an oscillating pattern. This regulates the outward flowing air to the suppressor chambers. This helps the already expelled air to bleed off, and not be hyper charged as it passes thorough the suppressor chambers. Test fired with 5.56 ammo, sound was 78 decibels at the muzzle. 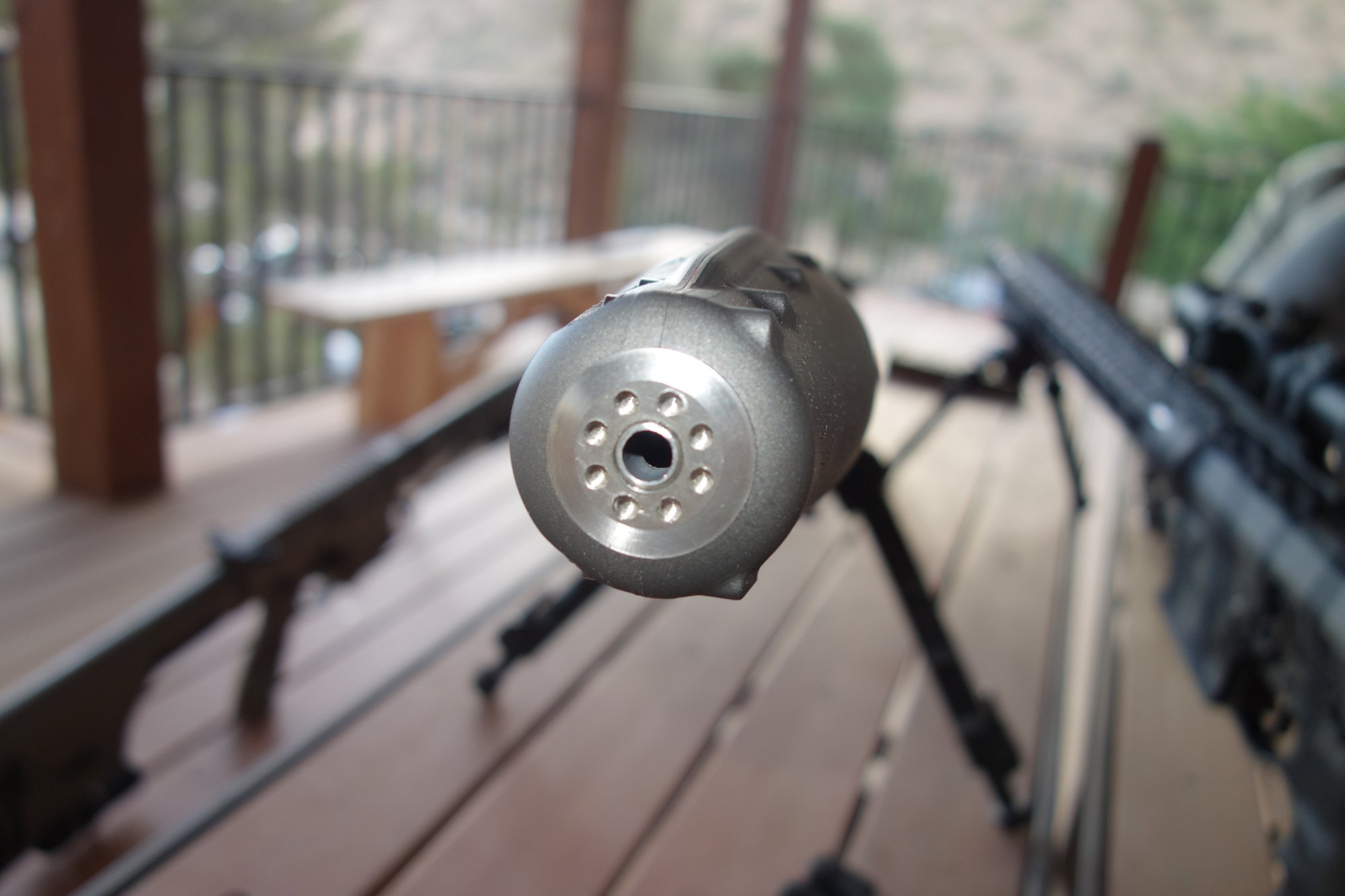 By controlling the air pressure passing through the suppressor in a gentle manner, heat is drastically reduced. This is made possible by not hyper charging the suppressor chambers with air. Packing hot air on top of hot air unregulated creates a lot of heat. This is why most suppressors cannot be touched after one 30 round magazine.

Night time testing was conducted with 5.56 rounds shot in semi auto and full auto. Zero muzzle flash was produced from 25 yards in front of the shooter. Filmed from 10 feet to the side of the shooter a very dim flash was visible for the first 2 semi auto rounds fired. We believe this might have occurred because the rifle had just been cleaned, and the flash was left over residue from the lubricants used. Fired on full auto, NO muzzle flash was visible from the front or sides. 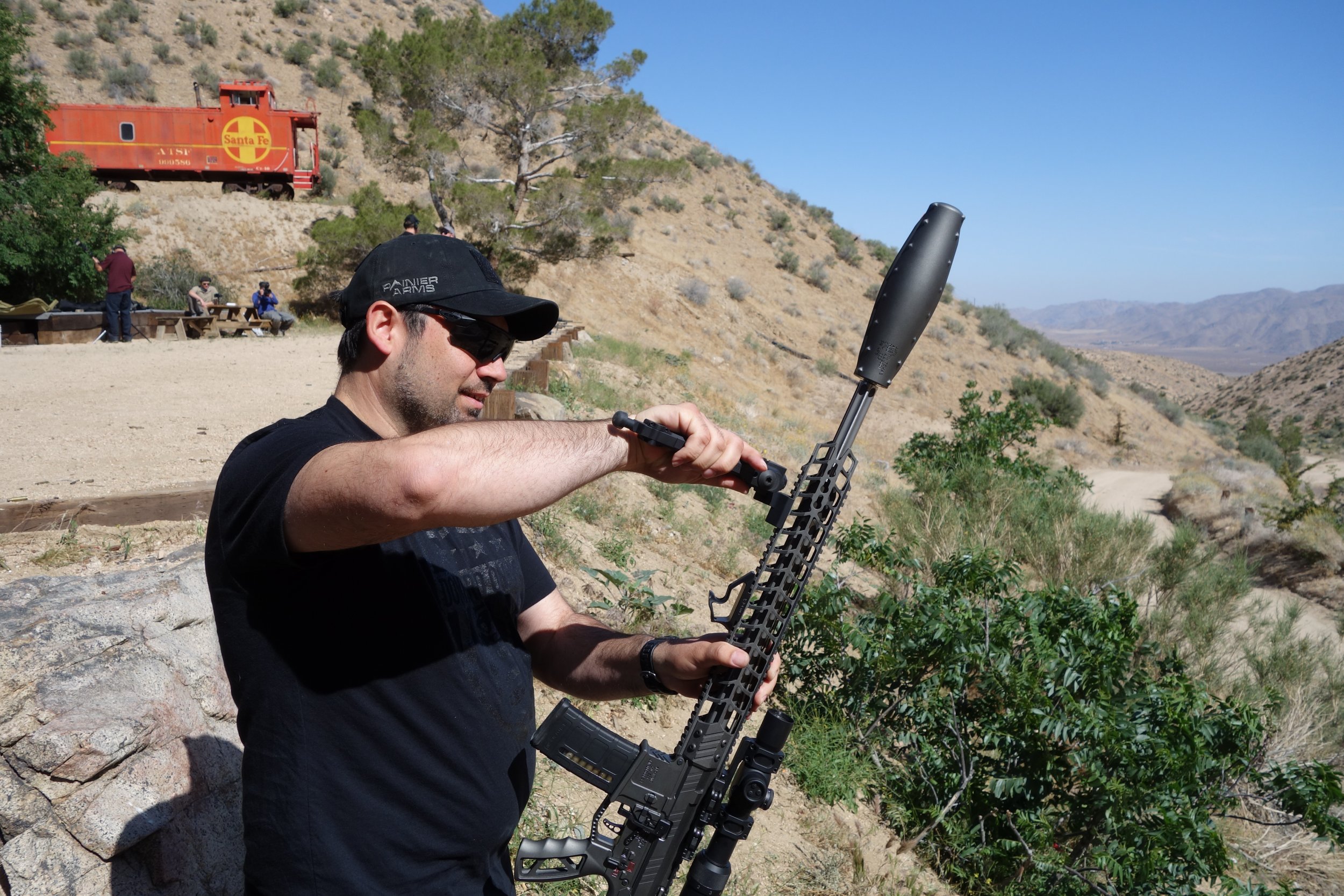 Zero Loss in Round Velocity

The inner barrel acts much like a barrel extension. Testing showed average rounds picked up 100 meters per second of velocity. Testing has also shown that the Aero Sonic equipped guns to be MORE accurate, showing no typical suppressed round drop. Plain and simple, they just shoot better.

The Aero Sonic’s unique design allows the suppressor to be field stripped and serviced. Replaceable baffles and o-rings make it a tool that will last a lifetime. We feel this is the most valuable feature of our suppressor. Most common suppressors have a 2500 round lifespan. We have several active prototypes with 20,000+ rounds and counting. 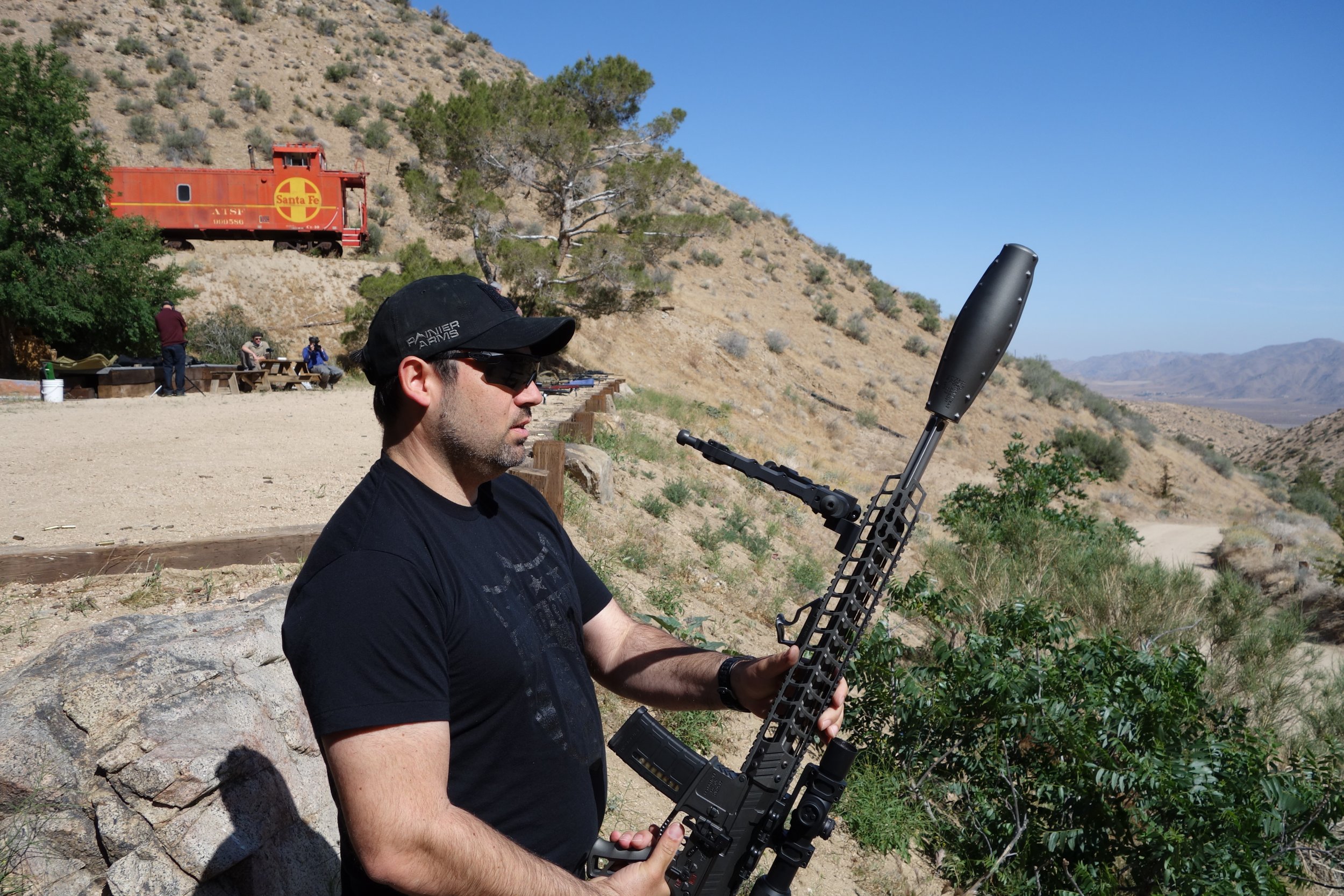 Superior materials like Titanium, Inconel, 7075 Aluminum, and Stainless Steel are used in its construction making for a very durable product. Aero Sonic

David Crane started publishing online in 2001. Since that time, governments, military organizations, Special Operators (i.e. professional trigger pullers), agencies, and civilian tactical shooters the world over have come to depend on Defense Review as the authoritative source of news and information on "the latest and greatest" in the field of military defense and tactical technology and hardware, including tactical firearms, ammunition, equipment, gear, and training.
Previous US Optics Academy Long Range Precision I: Two-Day Precision Rifle/Long Range Interdiction (Sniping) Course with US Marine Corps Sniper/Instructor Tyler Hughes in the Southern California Mountains
Next Fresh articles on the way from SOFIC 2015…