DefenseReview first reported on the KAC 6x35mm PDW (Personal Defense Weapon) back in May 2006, after we had viewed and handled it at SHOT Show 2006 in Las Vegas. It was the coolest and most interesting weapon we’d seen at the show, so we were quite pleased to get the opportunity to test fire it at one of the Knight’s Armament Company test ranges in Titusville, Florida during SHOT Show 2007 (Orlando, FL).

We ran the KAC 6mm PDW on both semi-auto and full-auto, and put several magazines through the weapon. Even though the weapon is lightweight (4.5 lbs), felt recoil was relatively low, and we found… 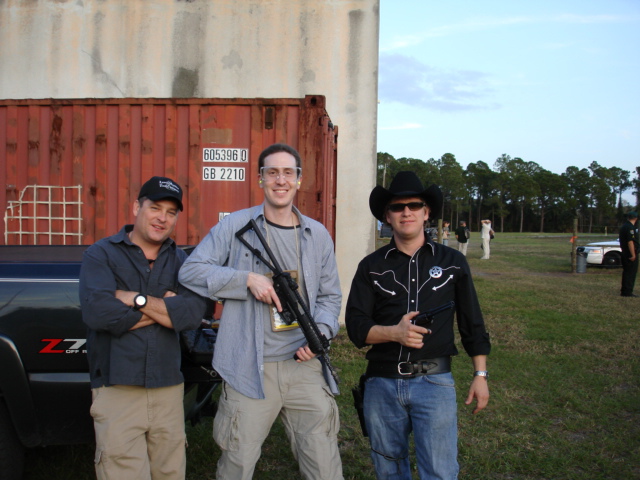 the weapon to be controllable during full-auto strings. During these strings, we were able to keep the weapon on target. The KAC PDW utilizes a dual-gas-piston/op-rod setup with AK-style bolt, which makes it’s piston/op-rod design different from an HK416 or LWRC M6A2 CQB rifle, which both utilize single gas pistons/op rods and AR-15/M16 style round bolt/bolt carrier groups. We could go into further detail about this (design differences), but we won’t, since we haven’t yet been cleared to do so.

While we weren’t able to torture test the gun under adverse conditions and high round count due to the nature o the venue, logistics, and time constraints, the 6x35mm PDW ran flawlessly during our test, with no stoppages or malfunctions. Defense Review came away from the firing session impressed with the weapon.

The 6mm PDW is an impressive little (lethal) package, considering its compact size, AR configuration and control layout, it’s proprietary cartridge, it’s controllabity on full-auto, and it’s projected reliability (considering the design of its operating mechanism, i.e. the way it mechanically operates). The KAC PDW’s cartridge is what really separates it fromt the rest of the PDW pack, like the HK MP7A1 PDW (4.6x30mm) and FN P90 PDW (5.7x25mm). The proprietary 65-grain KAC 6x35mm round creates a claimed (approx.) 40% less recoil than the 62-grain M855 5.56x45mm NATO/.223 Rem. ball round when both rounds are fired out of a 10" barrel, yet the 6mm round supposedly packs more punch (i.e. more energy) within the weapon’s operating envelope of between 200 and 300 yards. To be precise, the 6mm round generates a reported 848 ft./lbs (foot/pounds) of muzzle energy at a muzzle velocity of 2425 fps (Feet Per Second) vs. the M855 ball’s reported 776 ft./lbs of energy (unconfirmed/unverified), when both are fired out of 10-inch barrels.

The KAC 6x35mm PDW round is interesting, but DefenseReview would like to see KAC offer a beefed-up/larger version of the PDW chambered for both 5.56mm and either 6.8x43mm SPC (6.8mm SPC) or SSK 6.5 MPC.

David Crane started publishing online in 2001. Since that time, governments, military organizations, Special Operators (i.e. professional trigger pullers), agencies, and civilian tactical shooters the world over have come to depend on Defense Review as the authoritative source of news and information on "the latest and greatest" in the field of military defense and tactical technology and hardware, including tactical firearms, ammunition, equipment, gear, and training.
Previous Milkor USA M32 MGL 40mm Multi-Shot Grenade Launcher Range Session
Next Has the National Institute of Justice (NIJ) Been Corrupted?