If this thing’s for real (and it looks like it could very well be), underwater diving just got a whole lot more interesting, and the U.S. Navy SEALs and U.S. Marine Corps divers might soon be utilizing a rather revolutionary (and tankless) underwater breathing technology to help them accomplish their missions. It’s called "Like A Fish", and it’s the brainchild of Israeli inventor Alan Izhar-Bodner (a.k.a. Alon Bodner).
Described as a "revolutionary underwater breathing system", Like A Fish is basically a…

(rechargable) battery-powered artifiicial gill for humans that utilizes a centrifuge mechanism to pull oxygen from sea water, thus taking advantage of the "Henry Law", which describes gas absorption in liquids.

The "Henry Law" states that the amount of gas that can be dissolved in a liquid body is directly proportional to the pressure on the liquid body. The "Henry Law" works in both directions, and this is where the centrifuge comes in. The centrifuge creates underpressure inside a small sealed sea water-filled chamber, via rapid rotation. A one-kilo rechargable battery will provide a diver with about one hour of dive time.
An operational system that would enable a diver to stay underwater for multiple hours is still a few years off. The Like A Fish underwater breathing system, or "self-contained open-circuit breathing apparatus", as patents WO0240343 (May 23, 2002) and EP1343683 (September 17, 2003) describe it, is still in the laboratory stage, but a full-scale functional prototype is reportedly already under development.  So, get ready for the new scuba. 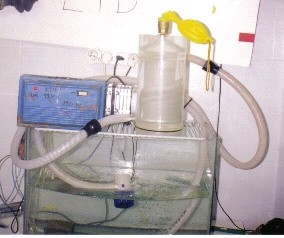 DefenseReview isn’t yet sure if the "Like A Fish" underwater breathing apparatus/system can be combined with a rebreather (rebreathing unit), for no-bubble (bubble-free) operation. This capability is important for military tactical operations where maximum stealth is necessary.