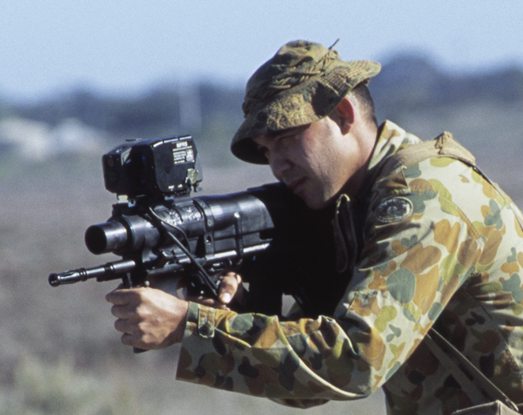 switch between 5.56mm and 40mm barrels instantly and without reloading. The 40mm barrel incorporates the Metal Storm electronically initiated “stacked munitions” system and can fire three rounds before re-loading is required.

The project was designed to evaluate the possible technologies available for the next generation of individual combat weapons, with emphasis on increasing the lethality of the weapon thereby enhancing the soldier’s capability and survivability.

Conventional 40mm grenade launching systems used with combat weapons are fitted as an add-on component with separate aiming and trigger devices and can only fire single rounds before reloading. The perceived advantage of the AICW concept is that the grenade launcher capability is fully integrated into the one combat weapon, and as it utilises Metal Storm technology, it can carry up to three rounds in the barrel ready to fire using the integrated common operating systems.
The trial firings engaged targets at 100, 200 and 300m, each with three 40mm projectiles, fired at a nominal velocity of 95m/s. In addition, the target at 300m was engaged with the standard 5.56mm rounds that are currently in service. The firings demonstrated the capability of engaging consistently a target the size of a window or doorway at 100m. New technology associated with recoil mitigation, sighting systems, and electronic fire control was also demonstrated.
Metal Storm’s Chief Executive Officer, Mr David Smith said “The ability to fire multiple 40mm shots without reloading, from an individual combat weapon, we believe will provide a major capability enhancement compared to existing individual combat weapons.
“There has been significant international effort placed on trying to develop a fully integrated individual combat weapon which provides for a 5.56 mm rifle and a grenade launcher system with greater range, improved fire control and at the right weight. AICW is well along the path to achieving all these capabilities.
“Our objective now is to build on the success of the AICW Capability Demonstrator project through an industry funded effort to further refine and ultimately commercialise the concept. The next generation will incorporate the latest developments in Metal Storm technology (which has advanced since the AICW program began). Combined with the current development of High Explosive rounds, we are now very close to being able to deliver a much more advanced individual combat weapon that includes all the required capabilities at an appropriate weight level.” David Smith stated.
Photographic and film images of the AICW will be posted on the Company’s website.
Click here to view the official/original Metal Storm Limited press release.
Click here to view photos of both the Metal Storm AICW (Advanced Individual Combat Weapon) and Metal Storm Area Denial Weapon System (ADWS) at Metal Storm’s website.
Metal Storm Demos Advanced Individual Combat Weapon (AICW) Prototype (Photo) by David Crane

David Crane started publishing online in 2001. Since that time, governments, military organizations, Special Operators (i.e. professional trigger pullers), agencies, and civilian tactical shooters the world over have come to depend on Defense Review as the authoritative source of news and information on "the latest and greatest" in the field of military defense and tactical technology and hardware, including tactical firearms, ammunition, equipment, gear, and training.
Previous SIGARMS and Heckler & Koch/HK Defense Win Major Pistol Contracts with DHS
Next Internal View of Metal Storm AICW (Advanced Individual Combat Weapon) 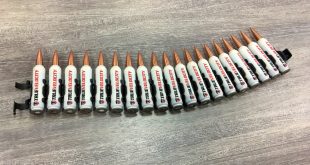