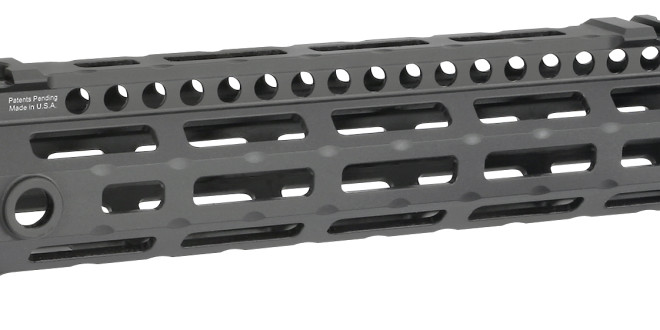 In the last few years, Midwest Indusries (MI) has been on a real tear, making some of the best tactical AR, FN SCAR, and Kalashnikov AK (AK-47/AKM) accessories in the business, especially tactical handguard/rail systems and mounts. DefenseReview (DR) has covered a lot of these developments (see “Related Articles” section below). So, it’s no surprise that MI’s recently introduced some new QD (Quick-Detach) mounts and third-generation KeyMod and M-LOK handguards/rails, which feature some major design modifications/improvements, primarily relating to ease of installation (and maintenance).

Defense Review is very much looking forward to viewing and handling these new products at SHOT Show 2016 in a little over a month. The Midwest Industries booth is a good time, with nice people.

In the meantime, below is the slightly modified email message we received from MI’s Pete Bratz about the new MI QD mounts and G3 KeyMod and M-LOK tactical handguards, which look good from the pics:

Midwest Industries has an entire new line of QD mounts available for this year. We have been involved in the AR-15 manufacturing game for over 10 years, and have worked very hard to bring to market the best quality products we can at a price that is affordable. The owner of Midwest Industries, Troy Storch, was at one-time part owner of the American Defense Manufacturing [ADM] company, and is one of the names on their patents. With his knowledge of what works and what doesn’t, along with the background in manufacturing that Midwest Industries has, we are proud to bring to market what we consider to be the best optic mounts available.

Also new for this year is the third generation of one-piece handguards from Midwest Industries. With the great success and multitude of positive reviews we received on the second generation of handguards, we had a very solid platform to start with. One of the big changes [in] stepping up to the third generation is the addition of more usable interface [rail real estate]. With the Gen-two handguard, we had three sides of M-LOK or Keymod, whereas with the third generation, we now have seven usable sides. This gives the user the ability to run lights and other mission-specific gear wherever they need to.

The second big change is the new barrel nut and torque plate attachment method. With patents pending, this new attachment method is easier yet for the installer. The barrel nut, once torqued, does not require timing to allow the gas tube to line up with the upper receiver. Also, with the addition of the torque plate, we decreased the chances of the installer over-torquing the clamp screws and damaging the aluminum handguard.”

Here are links to the new products:

David Crane started publishing online in 2001. Since that time, governments, military organizations, Special Operators (i.e. professional trigger pullers), agencies, and civilian tactical shooters the world over have come to depend on Defense Review as the authoritative source of news and information on "the latest and greatest" in the field of military defense and tactical technology and hardware, including tactical firearms, ammunition, equipment, gear, and training.
Previous FLIR Systems/DJI Zenmuse XT Stabilized and Gimbaled Thermal/IR (Infrared) Camera Going on DJI Inspire 1 and Matrice M100 Quadcopter/Quadrotor Mini-UAS/UAV/Drone Aircraft Platforms for Security and Surveillance Operations: Sees Through Smoke and Fog!
Next Northrop Grumman NG Air Dominance (NGAD) Low-Observable/Stealth Multirole and Potentially-Supersonic ‘Superjet’ Jet Fighter Aircraft Prototype Armed with Laser Weapons/Cannon!: Hittin’ the ‘Sweet Spot’ with the ‘Baby B-2’ F/A-XX