A couple of brothers—twins, actually—out of North Brunswick, Maine, Geoffrey and Michael Howe of Howe and Howe Technologies Inc., have developed a relatively large tracked tactical UGV (Unmanned Ground Vehicle) for military applications called the Ripsaw Military Spec 1 UGV (a.k.a. Ripsaw MS1 UGV a.k.a. Rip Saw MS1 UGV). Billed as "the world’s fastest tracked vehicle", the Ripsaw MS1 is essentially an unmanned, militarized hotrod on tracks that’s able to hit 50mph in about 4 seconds. The original Ripsaw UGV (non-militarized) prototype could hit 50mph in about 3.5 seconds, since it was lighter, but it wasn’t as strong/rugged. The original speed goal for Ripsaw was approx. 80mph, but the Howe brothers have discovered that driving UGVs remotely can get scary and precarious at speeds above 50mph. According to Geoff Howe, 50mph is scary enough, and they don’t see a tactical need at present to go faster with a UGV, although that decision would ultimately be up to the U.S. military if they adopt it.

The Ripsaw MS1 UGV large-format tracked tactical robot can move at relatively high speed over all terrains with a lot of power and authority, due to a number of design aspects/factors. One of these is 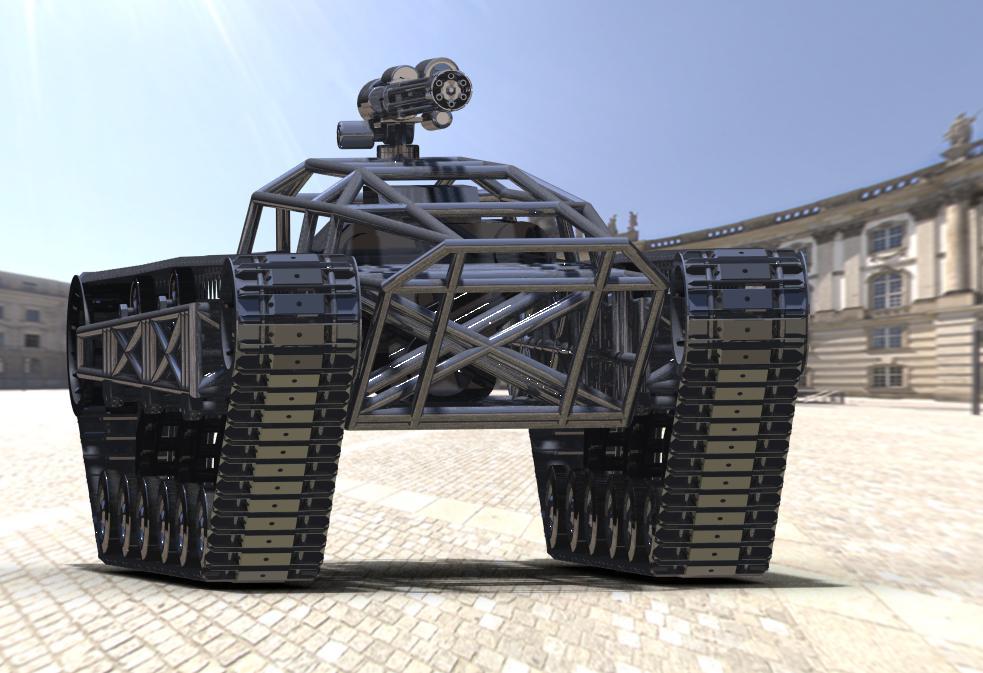 its unique lightweight, rugged tubular chassis construction. The Howe brothers got the tubular-chassis-construction idea from NASCAR race cars. "The most unique thing about Rip Saw MS1 UGV is that it’s the same technology that’s used in Nascar or Monster Trucks. It’s built with a tube chassis, which allows us to decrease weight and increase strength,” say the Howe brothers. The high-horsepower/high-torque engine requires a custom, heavy-duty transmission (larger, more rugged components/parts) and drivetrain, which is provided by New England Transmission.

The Howe brothers are all about simplification. The entire vehicle is comprised of only 8 components, including the engine/motor and tubular chassis. The chassis itself can be lifted from the engine in less than an hour. To replace the engine, just drop it (engine) out, and lift the chassis off. Streamlined maintenance is therefore one of the the vehicle’s selling points. While the chassis itself requires more than 1,000 tube cuts, Ripsaw inventor Mike Howe innovated a tube-cutting process that cuts down fabrication time of the Ripsaw’s roll cage by 300-400%. Previously, it would have taken hours to cut and prepare a single pipe. No longer.

The Ripsaw MS1 tactical UGV utilizes a powerful oversized and customized 650-horsepower Duramax 6.6L V8 diesel engine that delivers 900 ft./lbs of torque. Factory horsepower for the engine is 375hp, so the Howe brothers have suped it up a good bit. The engine fits inside a 3×3-foot (3×3”) space in the chassis.
One of the most interesting aspects of the Ripsaw MS1 UGV to DefenseReview is its unique, custom suspension system. Ripsaw utilizes an impressive custom-designed, in-house-developed) Baha-off-road-type, caterpillar-like independent suspension system that has an impressive 18 inches of takeup. The Howe brothers call it a dual-acting dog-leg suspension. Each primary L-type suspension arm has its own Baha-racing-type air shock absorber, and is connected to the middle of the secondary hinge-arm, called the “bogey bar”, to which the wheels are attached/connected. This hinged bogey bar can swing back and forth (i.e. up and down) like a seesaw/teeter-totter. The dog-leg suspension system can handle a 4-foot static drop test onto concrete without suffering any apparent damage.

But that’s not all. The Rip Saw MS-1 UGV’s specialized suspension system is mated to custom tracks, which are, according to the Howes, a "key ingredient" that enables the Ripsaw to perform as well as it does. The tracks feature a “shark-fin” aspect that helps keep them attached to the drive system in even the most adverse terrain at high speeds, so the Ripsaw is very resistant to “throwing a track”. In designing this aspect, the Howes drew inspiration from chainsaws, which, for obvious reasons, have to be highly resistant to throwing their chains, even though the chain is revolving at extremely high speed while cutting through wood. The Ripsaw MS1 drive system/track setup is so tough that you can throw a rectangular chunk of wood (lumber) into the drive system so that it gets between the drive sprocket and the track, and the drive system will rip the wood apart and eject the broken pieces from the action and just keep goin’, hence the name "Ripsaw".The Ripsaw’s tracks are driven by beautifully-designed drive sprockets, by the way.

One of the coolest aspects of the Ripsaw MS1 is the remote-control driving station that matches the MS1’s performance. It’s built by local electronics expert and project "Control Specialist" Chuck Fritz. The remote command center/driver’s station allows the operator to drive/control the vehicle as if he were in it, even though he’s controlling it from the inside of a control van. Eventually, the system will allow the driver to remotely operate the vehicle from many miles away. The remote driver’s station appears to be fairly immersive, allowing the driver a fairly wide field of view. The vehicle responds to the driver’s movements virtually instantaneously, thanks to the Ripsaw’s radio-controlled, on-board Remote Drive System a.k.a. Remote Control Drive System, which uses rugged commercial-off-the-shelf (COTS) industrial components, like the Allen-Bradley Kinetix 2000 low-power multi-axis servo drive (integrated motion control servo drive), for example. "The motor drives are fiber speed, fast as light. We’re talking ethernet speed," says electronics expert and Ripsaw MS1 project "Control Specialist" Chuck Fritz.

The TV show Backyard to Battlefield, produced by NAHB Production Group for the Military Channel, recently showed the Ripsaw MS1 UGV prototype passing a field demonstration/test for U.S. Army personnel, including folks out of ATC (Aberdeen Test Center). The Army personnel present appeared to be impressed with the Ripsaws overall performance, which included scaling a 30ft 45-degree hill, driving over vegetation, turning on a dime (and on its own axis, as only tracked vehicles can do).

A quick note: The Ripsaw MS-1 UGV proves the superiority of tracks over wheels for all-terrain/off-road military applications, while simultaneously demonstrating that tracked vehicles can reliably operate at very high speeds, given the right combination of overall design (including chassis design), high-powered engine, advanced suspension system, and well-designed drive system/track setup. Nothing matches or beats tracked vehicles for the all-terrain/off-road military mission—period.

"Hands down, it surpasses most things that are out there right now," said MA1 Michael Horn, Portsmouth Naval Shipyard, who was one of the attendees. "It’s just zippin’ up and down hills and over rubble like it’s not even there," said David McCartney, ATC. An unnamed attendee added, "This is a totally new, unique concept for us. It’s gonna’ change how we operate."

And, how’s it going to do that? U.S. Army EOD Specialist, Maj. Mike Pottratz envisions the operational production-version of Ripsaw performing force protection duties, including convoy protection and infantry support. The Howe brothers actually sold the Senate Armed Services Committee on the Ripsaw by showing them the infamous video of the HMMWV (Humvee) pushing a wrecked car off the road and getting blown up, since the car turned out to be a VBIED (Vehicle Borne Improvised Explosive Device). The Howe brothers told the committee that the person driving the Humvee in the video didn’t need to be there performing that incredibly dangerous job. They told them that the Ripsaw could do it instead, for the relatively low per-unit cost of $250,000. That’s pretty good, considering the size and performance capabilities of the vehicle.  The Senate Armed Services Committee is funding Ripsaw MS1 development, and Sen. Susan Collins a.k.a. Senator Susan M. Collins (R-Maine) has shepherded the Ripsaw project through the committee.

For the convoy-protection/force-protection role, a little weaponization is perhaps in order. So, the Rip Saw UGV will also have a gunner to operate the Ripsaw’s wireless remote weapon station (RWS). The Army’s first wireless remote weapon system, called the Picatinny Lightweight Remote Weapon Station (PLRWS), has already been applied to the Ripsaw MS1. The Ripsaw’s PLRWS sports an FN M240-series GPMG/MMG. It’s crucial, of course, that the Ripsaw’s remote drive system’s and Picatinny Lightweight Remote Weapon Station’s radio comms don’t conflict/interfere with one another. That would not be good. "At all times, we want full control of both the Ripsaw and the weapon station. If my weapons station were to drown out the actual vehicle, it would be considered a mision failure," said project electrical engineer Matthew Moeller.

Defense Review has seen drawings of an armed/weaponized Ripsaw UGV with a Gatling gun attached. The Dillon Aero M134D and M134DT Gatling Guns (a.k.a. M134D and M134D-T Miniguns) and Garwood Industries M-134G Electric Minigun systems would appear to be good candidates for the Ripsaw MS1, with the M134DT Titanium Gatling Gun being perhaps the best candidate due to its lighter-weight titanium components, which give the M134D-T an overall weight of 41.5-50.5 lbs, depending on how it’s configured. The M134D-T weighs approx. 20% (12-15 lbs) less than the standard M134D. Hopefully, Garwood will offer a similar titanium version of the M134G. The Garwood M134G Minigun is currently marketed by the Scottsdale Gun Club (SGC).

Whichever weapon system that’s mounted, it should be configured so it can’t just be removed from the vehicle and utilized by the enemy (or, at least, easily utilized by the enemy) if they’re able to disable and/or capture the vehicle/robot. It might be a good idea to rig it so it can be remote-detonated by the operator or will automatically detonate if it isn’t removed according to a specific process/sequence. In other words, they should booby trap it. Each Ripsaw should incorporate not only a multispectral driving and targeting camera system, but also a secondary multispectral camera system that allows a 360-degree view, so no one can sneak up on it. The military should also consider runnning the vehicle in packs of two or more, and combined them with manned vehicles, to make sure that none of the robots get captured, even if they’re disabled.

Let’s face it, we don’t want a weaponized Ripsaw UGV to end up becoming a "Taliban Resupply Vehicle" (TRV) like the Foster-Miller SWORDS (Weaponized Talon Robot) is rumored to have become in Afghanistan. The "Taliban Resupply Vehicle" moniker, and the reason for it, was explained to DefenseReview by one of our U.S. Army Special Forces (SF) contacts.

Defense Review also recommends applying multispectral camouflage–including daylight, near-infrared (anti-night vision), and thermal/IR (infrared) camo–to the vehicle, so it can’t be easily identified/located and targeted. White smoke dispensors should be also be part of an overall countermeasures and obscuration package.

Finally, whenever possible, weaponized Ripsaws should either be part of a combined manned/unmanned vehicle force or operated in packs of two or more vehicles (Ripsaws), so they can enjoy pack protection and combined firepower. A swarm of weaponized Ripsaws (many vehicles), even without manned vehicle accompaniment, would most likely be a difficult problem for the enemy.

In any case, the Ripsaw looks very promising, and DefenseReview will follow its future development.

David Crane started publishing online in 2001. Since that time, governments, military organizations, Special Operators (i.e. professional trigger pullers), agencies, and civilian tactical shooters the world over have come to depend on Defense Review as the authoritative source of news and information on "the latest and greatest" in the field of military defense and tactical technology and hardware, including tactical firearms, ammunition, equipment, gear, and training.
Previous Holsters Plus Sure-Lock 3-10 Fast-Draw Tactical Kydex Retention Pistol Holster
Next F-22 Raptor and Other Big-Budget Military Programs Reinvigorated