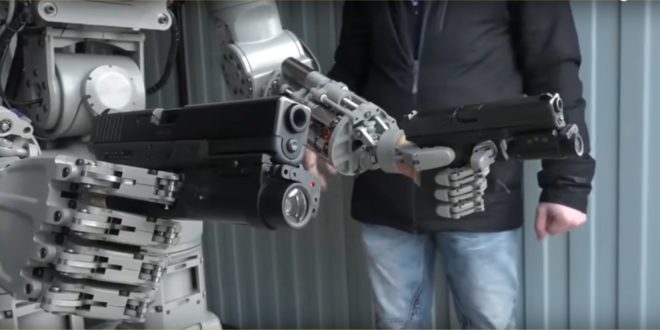 Russian robotic military tech has been getting a lot of media hype lately with discussion of gun-launched “drone swarms” and armed/weaponized humanoid “Terminator”-type (Terminatorsky?) robots, but how much of this is pure Russian government-controlled media hype and bluster, and how much is real and possible? DefenseReview (DR) has no idea, but whatever the case, the US military has to assume the worst, and act accordingly–and we have to assume the Russians might team up with China versus the United States and our NATO allies. Imagine intelligent armed/weaponized Chinese and Russian recon/combat drone swarms working in concert with armed/weaponized humanoid robot swarms and armed/weaponized robotic vehicle swarms on the ground in a full-on nation-state WWIII level war against a Sino-Russian military alliance. It’s a scary prospect, and one we must be adequately prepared for.

On the humanoid Russian Robot (or robotic Ivan, if you will) front, the Russian F.E.D.O.R. robotic/droid platform, currently scheduled for space flight in 2021, reportedly recently went gangsta at a firing range, firing what appear to be a pair of Glock 17 (G17) pistols (one in each robotic hand) outfitted with laser/light/(camera?) modules, and his Rusky designers/engineers are developing FEDOR’s fine motor skills and and “decision algorithms” so it can instantly prioritize and engage targets. These reports are backed up by video (see below), which also shows a Russian weaponized robotic ground vehicle called Vikhr (“Whirlwind” in English) and its companion quadcopter UAS/UAV/drone aircraft in action.

On the ballistically-launched, or gun-launched, front, the Russians are reportedly developing two systems. The first is a handheld grenade-launcher-type recon (reconnaissance) drone launcher within 5 seconds to three minutes, depending on the amount of time it takes to prepare a proper flight program. The second is the Smerch multiple launch rocket system, where drones would be launched inside Smerch missile warheads. However, since the aforementioned Vikhr system is armed with a 30mm cannon and rockets/missiles, and it would seem logical that drones could eventually be launched from it.

Defense Review will keep monitoring this technology. In the meantime, we hope the U.S. military industrial complex (USMIC) is developing an effective counter to it, and hopefully one that works a lot better than Skynet. Oh, wait a second, apparently the USMIC IS indeed working on it, and Stars and Stripes just published a piece on it. It’s called the Mobile High Energy Laser (MHEL), and oh, yeah, we’ve (DR) reported on LAWS (Raytheon Laser Weapon System), its larger naval/marine cousin. We’ve also reported on the Boeing ATL (Advanced Tactical Laser), which we’d like to see the U.S. military use on enemy targets. We’re curious about its combat effectiveness, including its psychological effect on the enemy. Anyway, welcome to the future. It’s lookin’ pretty bright…and hot.