DefenseReview.com (DR) member “VPMudde1991” has posited in the “comments” section of our article on the Leader 50 BMG bullpup semi-auto .50BMG (12.7x99mm NATO) anti-materiel/sniper rifle that the Leader 50 is perhaps reminiscent of the Hungarian Sero Gephard GM6 Lynx semi-auto bullpup 12.7x108mm Russian / .50 BMG anti-materiel rifle, and has provided a link to The Firearm Blog’s blurb on it. However, unlike the short-stroke piston-driven Leader 50, the Gepard GM6 Lynx operates via long recoil operation where the barrel recoils/reciprocates along with the bolt carrier group, just like on the Barrett semi-auto .50-caliber rifles, including the Barrett XM500 prototype bullpup semi-auto .50 BMG, which DR reported on in June 2006. 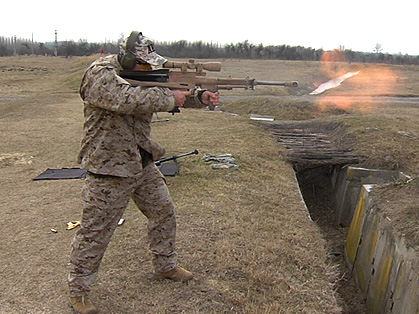 Being long-recoil operated, the Gepard GM6 Lynx is intended for the anti-materiel role, rather than the sniping role, whereas the goal of the Leader 50 is to fulfill the same role as the Accuracy International (AI) AS50 .50BMG semi-auto anti-materiel/sniper rifle, which is to approach the accuracy of battle-proven bolt-action .50 BMG anti-materiel/sniper rifles like the excellent AI AW50 (Arctic Warfare 50) and McMillan TAC-50. You can watch Defense Review owner/editor David Crane talking about The TAC-50 on the “Sniper Rifles” episode of the show Ultimate Weapons on The Military Channel.

Also, the Gepard GM6 Lynx weighs more than the Leader 50, and its box magazine only holds 5 rounds, compared to the Leader 50’s 10-round box mag.

DefenseReview will try to find out if the Gepard GM6 Lynx .50BMG rifle will be available to civilian tactical shooters in the U.S. at some point. We certainly hope so.

The following information and specs on the Gepard GM6 Lynx semi-auto bullpup anti-materiel rifle come directly from the Sero website: 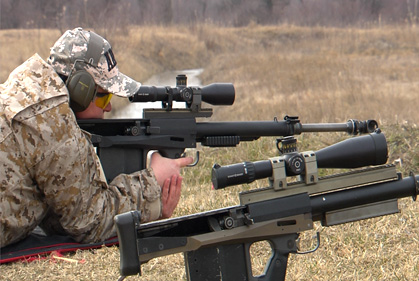 “Purpose of the rifle

In case of urban warfare/conflict it can be used for demolishing the enemy’s firing positions in buildings, weapons under cover and armoured rifle troops, which are manoeuvring on the streets. It is suitable both for squads and independent units. Due to its small arm categorisation, its weight and portability, make it an ideal heavy weapon for the parachute, airmobile and territorial troops. It is also a highly effective small arm in repelling terrorist action. As this type of action is common in the field today, we believe it would play a key role according to the new North-Atlantic strategy, considering its significant destructive force, combined with formidable accuracy. Important hostile targets can be neutralised safely within a 1500m range.

It is also a highly efficiency, bodyguard-weapon for protection of important target personnel, which can extend significantly the firing range of the safe-zone around the target person, as an attack by a light armoured combat vehicle can be repulsed – by quick fire – within 300m. It is also suitable to repulse the so-called, “self-propelled (suicide) bombs,” which are installed in vehicles, with even one shot to the power of the vehicle outside the effect of the (non-nuclear) bomb.

David Crane started publishing online in 2001. Since that time, governments, military organizations, Special Operators (i.e. professional trigger pullers), agencies, and civilian tactical shooters the world over have come to depend on Defense Review as the authoritative source of news and information on "the latest and greatest" in the field of military defense and tactical technology and hardware, including tactical firearms, ammunition, equipment, gear, and training.
Previous Leader 50 BMG Revolutionary Ultra-Compact and Lightweight Semi-Auto Bullpup .50 BMG (12.7x99mm NATO) Anti-Materiel/Sniper Rifle for Military Special Operations Forces (SOF) and Civilian Tactical Shooters: Coming Soon to a Theater of Operations and Shooting Range Near You?
Next Kel-Tec KSG Shotgun: 15-Round (14+1) Bullpup Pump-Action 12-Gauge Combat Shotgun for Urban Tactical Operations and Applications (Photos and Video!)