The February 2008 issue of Guns & Weapons for Law Enforcement (GWLE) has an article by Eric Poole on the SIG-Sauer SIG 556 SWAT 5.56x45mm NATO (5.56mm NATO)/.223 Rem. assault rifle / tactical rifle/carbine/subcarbine/SBR (Short-Barreled Rifle), which is a redesigned SIG 551/552 rifle outfitted with a Mil-Std-1913 "Picatinny" rail system. The SIG 556 series weapons are available in both select-fire and semi-auto-only variants and are designed for law enforcement and civilian markets. 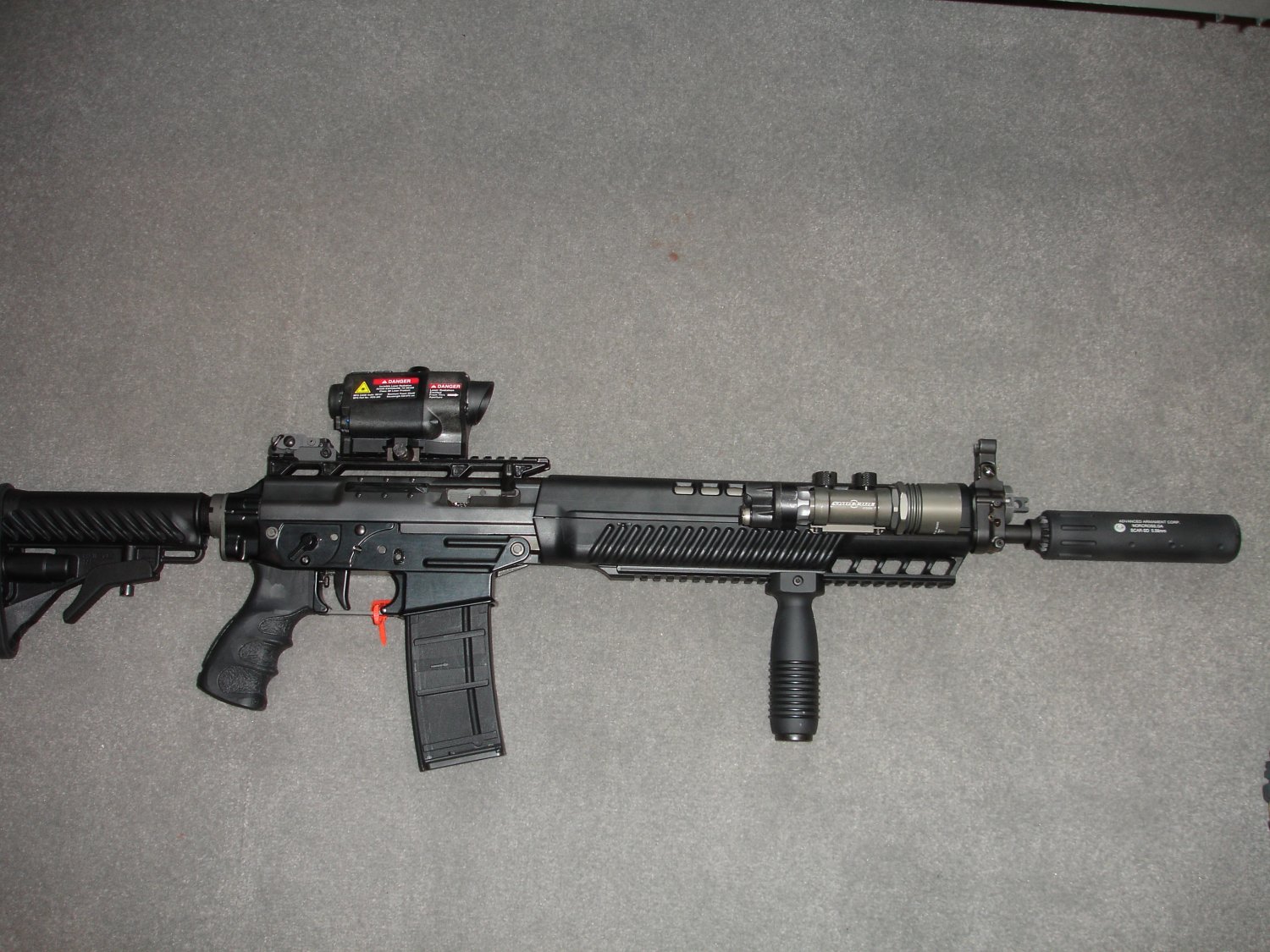 SIG 556 rifles/carbines at SHOT Show 2006 (photos accompanying this article), and found them interesting. We’ve always been fans of the SIG 550-series weapons, particularly after we test-fired a Gemtech-supressed (sound-suppressed) SIG 552 SBR/Subcarbine at SWAT Round-Up 2002. The SIG 550-series assault rifles / tactical rifles utilize an AKM / Kalashnikov-type gas-piston/op-rod system for operation, and you can’t really go wrong with that with regard to weapon reliability.

While the SIG 556 series weapons are currently only availale in 5.56mm NATO, 6.8x43mm SPC (a.k.a. 6.8mm SPC a.k.a. 6.8 SPC), 7.62x39mm, and possibly even 7.62x51mm NATO (7.62mm NATO)/.308 Win. (unconfirmed/unverified) versions are on the way. DefenseReview doesn’t know at present whether the select-fire variant of the SIG 556 SWAT is available in true semi-auto/full-auto configuration, or only in semi-auto/three-round burst config, or semi-auto/3-round burst/full-auto config. Unfortunately, Mr. Poole’s article does not make that clear. Defense Review prefers a straight semi-auto/full-auto selector switch. We like our trigger finger to determine how many rounds we put down range on full-auto, not an artificial limiter. In any case, the SIG 556’s trigger action in the 3-round-burst-capable variant appears from what Mr. Poole wrote to be superior to the Colt M4 Carbine trigger with regard to smoothness and consistency. 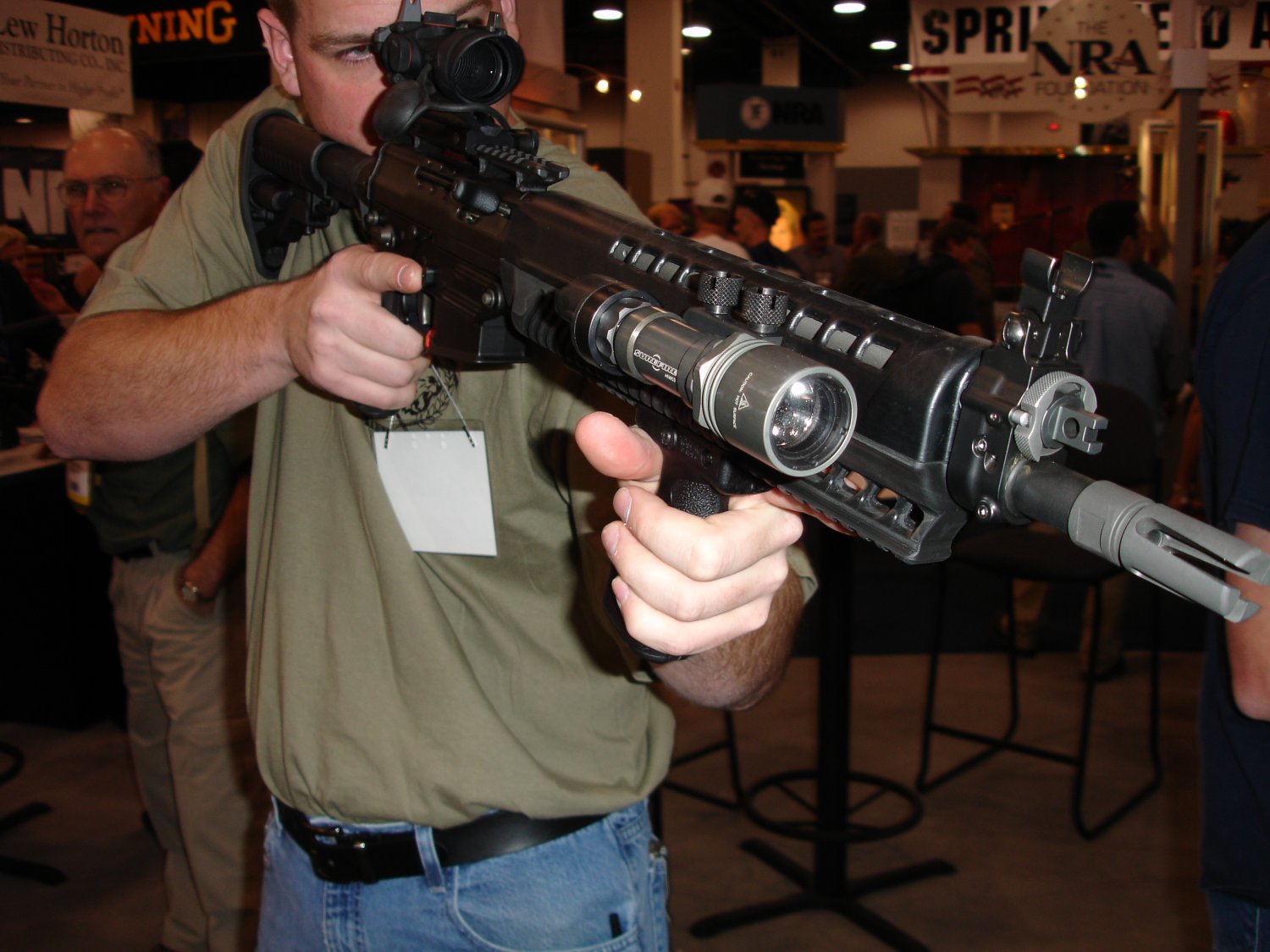 One thing that’s immediately noticeable on the SIG 556 SWAT is the right-side-situated cocking/charging handle and right-folding telescoping/folding MagPul CTR Carbine Stock buttstock. In DefenseReview’s opinion, the SIG 556’s charging/cocking handle should be switched to the left side of the weapon, since there are way more righties than lefties in this world. A left-side-situated cocking/charging handle would be ergonomically superior for righthanded shooters, and the lefties could still cock the weapon by canting it to the right with their strong/left hand and using their right hand to cock/charge the weapon. Better that lefties should have to do this than righties having to do the same procedure in the opposite (canting the weapon to the left with their right hand and charging it with their left/weak hand). It’s DefenseReview’s understanding that lefties account for roughly 10% of the human population, and they should be treated as such, no offense. 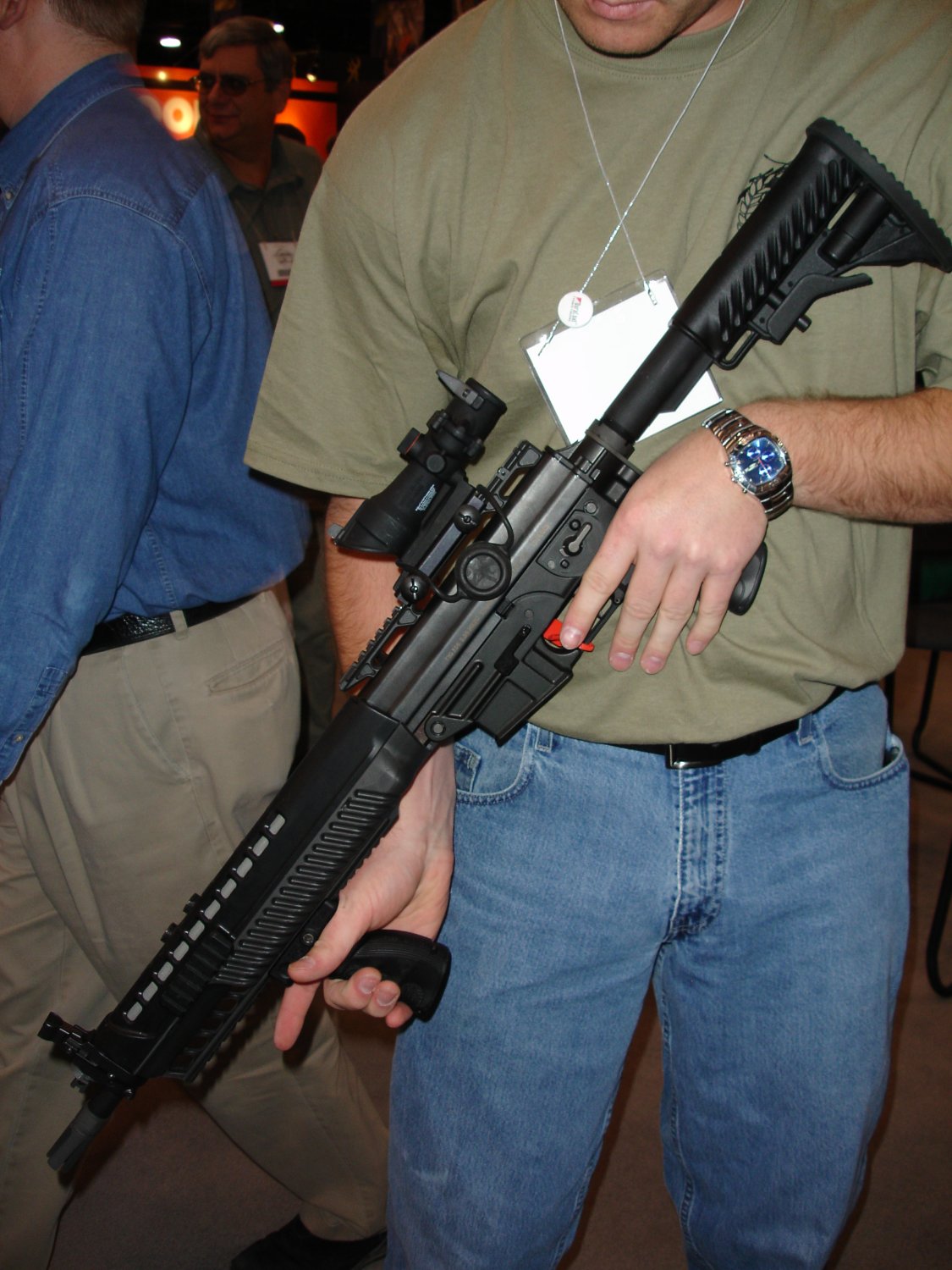 If the SIG 556’s charging handle is switchable to the left side, then we take everything we’ve said in the above paragraph back. If not, they need to make it so, or at least offer a left-side-situated-cocking-handle version.
The SIG 556 SWAT subcarbine/SBR that Poole tested functioned 100% reliably over "hundreds of rounds" with bullets of varying grain weights from 55 to 75 grains. The SIG 556 SWAT’s barrel has a 1-in-7 twist rate, and accuracy off the bench from 50 yards stayed within two inches (2") with all rounds fired. Poole quoted SIG Academy Director George Harris as saying "I’ve noticed that it doesn’t matter what ammunition you put in this rifle. If you can fit it in the magazine, this rifle will eat it." Harris added, "If shooting frangible, be aware of the lower pressures, especially if you are shooting a barrel 16 inches or shorter. In shorty ARs, we see all types of gas-related problems. In the SIG 556, just switch the gas regulator to the second position and run with it. This will keep more gas pushing agains the piston head long enough to reliably run the frangible ammo."
Defense Review likes the sound of that. Weapon reliability/durability is our primary concern, followed by accuracy, ergonomics, etc.
We can tell you from our experience handling the SIG 556 that the pistol grip is very comfortable to hold, and the weapon felt good overall balance-wise, if a little heavier than a SOPMOD M4/M4A1 Carbine. We also like the fact that in addition to SIG Sauer-proprietary 30-round polymer 5.56mm magazines, the SIG 556 mag well also accepts standard 4179 STANAG aluminum AR-15/M16 30-shot box mags, which means that the rifle will also accept MagPul PMAG polymer magazines, including the 30 rnd Maglevel PMAG polymer box mag with integrated translucent viewing window. 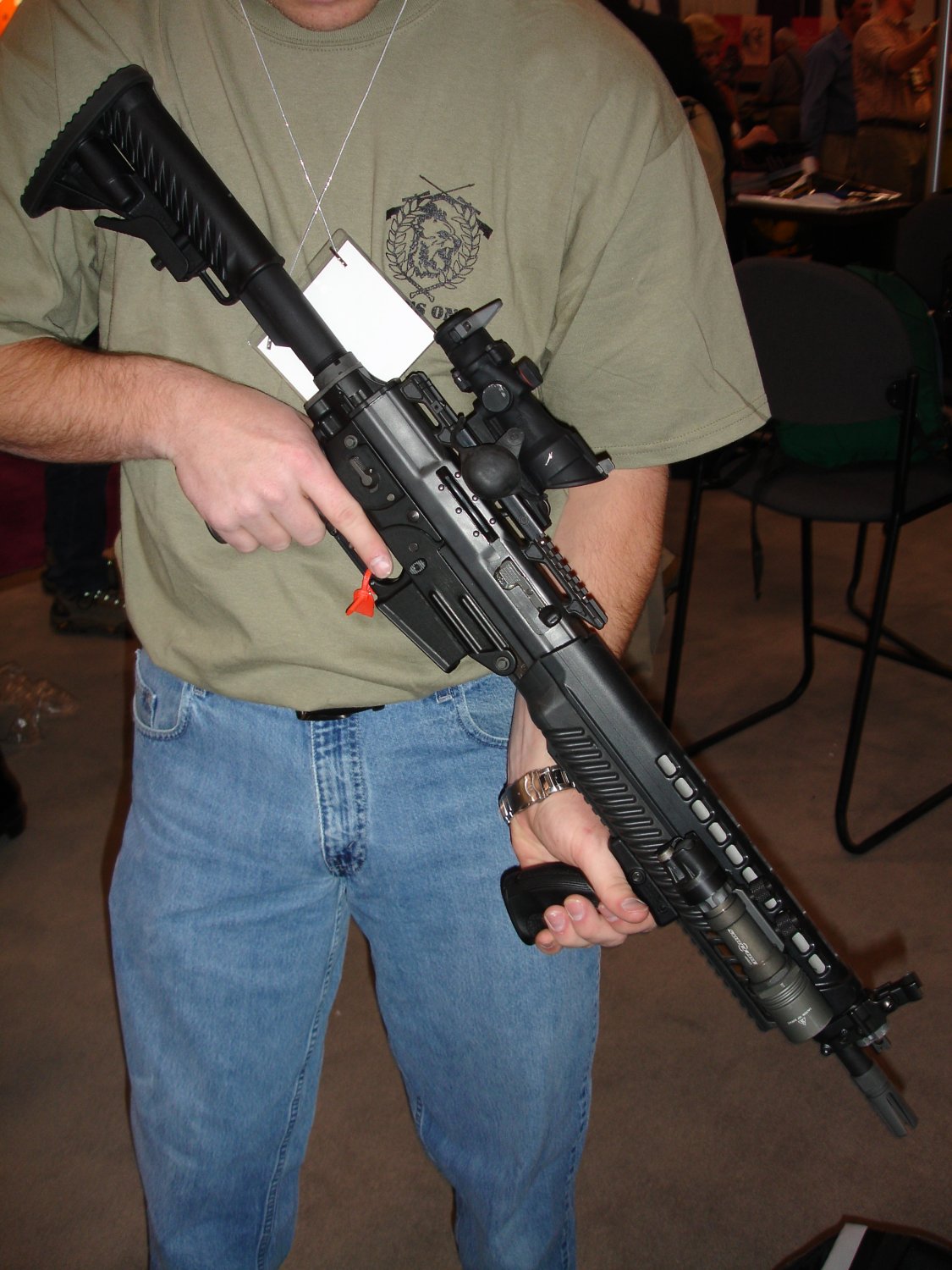 One thing that DefenseReview got a found interesting in Mr. Poole’s article is the mention of the SIG 556 SWAT’s rail forend being manufactured by Samson Manufacturing. Samson appears to have bounced back pretty healthily from recent legal battles with Troy Industries.
The SIG 556 series weapons are availabe in barrel lengths from 16 inches (16") (for civilians) down to 14.5-inch (14.5") and 10-inch (10") models for military and law enforcement (Mil/LE) end users. For carbine-length weapons, Defense Review prefers 16-inch barrels. Frankly, we don’t really like 14.5, as you lose 1.5 inches of barrel, and thus approx. 100 to 150 feet-per-second in velocity for no real gain in weapon compactness. A 12.5-inch barrel would be smarter, and we would increase the length of the 10-inch barrel by .5 inches so it’s 10.5 inches, as opposed to 10.0 inches. SIG Sauer might also want to test out an 11.5-inch barrel for the SIG 556 SWAT.
Weight of the guns is going to come in at approx. 7.8-8.7 lbs, depending on barrel length.
DefenseReview plans testing the SIG 556 SWAT and Civvie-legal 16" semi-auto-only version out soon, perhaps at SHOT Show 2008, if one is made available for a range session. In the meantime, we plan on giving both George Harris and Bud Fini, SIG-Sauer’s Vice President of Marketing, a call about some of what we’ve written here to get confirmation on a few things, as well as some additional info. DefRev is particularly interested to know how the SIG 556 SWAT stacks up against other gas-piston-driven 5.56 weapons like the the FN SCAR-Light (a.k.a. FN SCAR-L) and various AR-platform weapons like the Heckler & Koch (HK) HK416, POF-USA P415/416, LWRC M6A2, Colt LE1020, and developmental FERFRANS gas-piston/op-rod-driven system.

We’re also going to ask both men about the SIG Sauer P250 modular polymer-framed pistol, which has been getting a lot of press lately in the various print mags. So far, we haven’t received any feedback from anyone who’s purchased a SIG P250 pistol, but we’d like to hear from anyone who has.

Author’s Note: Just in case any of our readers are wondering about any of the tactical rifle/carbine accessories featured in the accompanying photos, the combat optic pictured in the top-right photo is either an Insight Technology ISM-V (Integrated Sighting Module with co-aligned visible aiming laser a.k.a. targeting laser) or ISM-IR (with co-aligned infrared aiming laser and variable-focus IR laser illuminator) red dot sight/laser sight. The optical sight/scope in the rest of the accompanying photos is, we believe, a Trijicon ACOG TA01NSN 4×32 Advanced Combat Optical Gunsight / rifle scope. The rail-mounted tactical white light picured is a Surefire Millenium Universal WeaponLight. The silencer / sound suppressor pictured in the top-right photo is an Advanced Armament Corp. (AAC) silencer/suppressor. The flash hider (a.k.a. flash suppressor) pictured in the rest of the accompanying photos is a Smith Enterprise Vortex Flash Eliminator.

Just a little extra service we provide for our readers. We like to make sure you know what you’re lookin’ at, because we appreciate you choosing DefenseReview as an information source.

David Crane started publishing online in 2001. Since that time, governments, military organizations, Special Operators (i.e. professional trigger pullers), agencies, and civilian tactical shooters the world over have come to depend on Defense Review as the authoritative source of news and information on "the latest and greatest" in the field of military defense and tactical technology and hardware, including tactical firearms, ammunition, equipment, gear, and training.
Previous Sandbox Field Report Part 1: Marvel Custom Tactical 1911 Pistol (Single Stack) Perform Downrange
Next M16 Rifle and M4 Carbine: Time For a Change