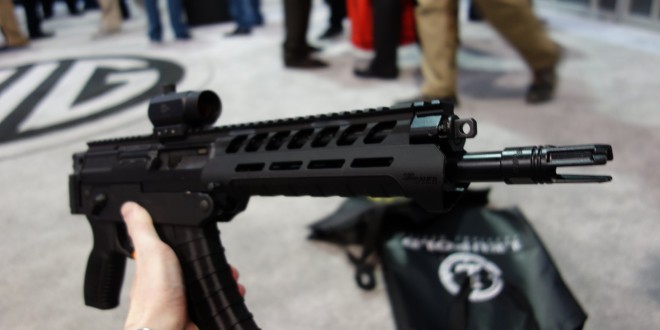 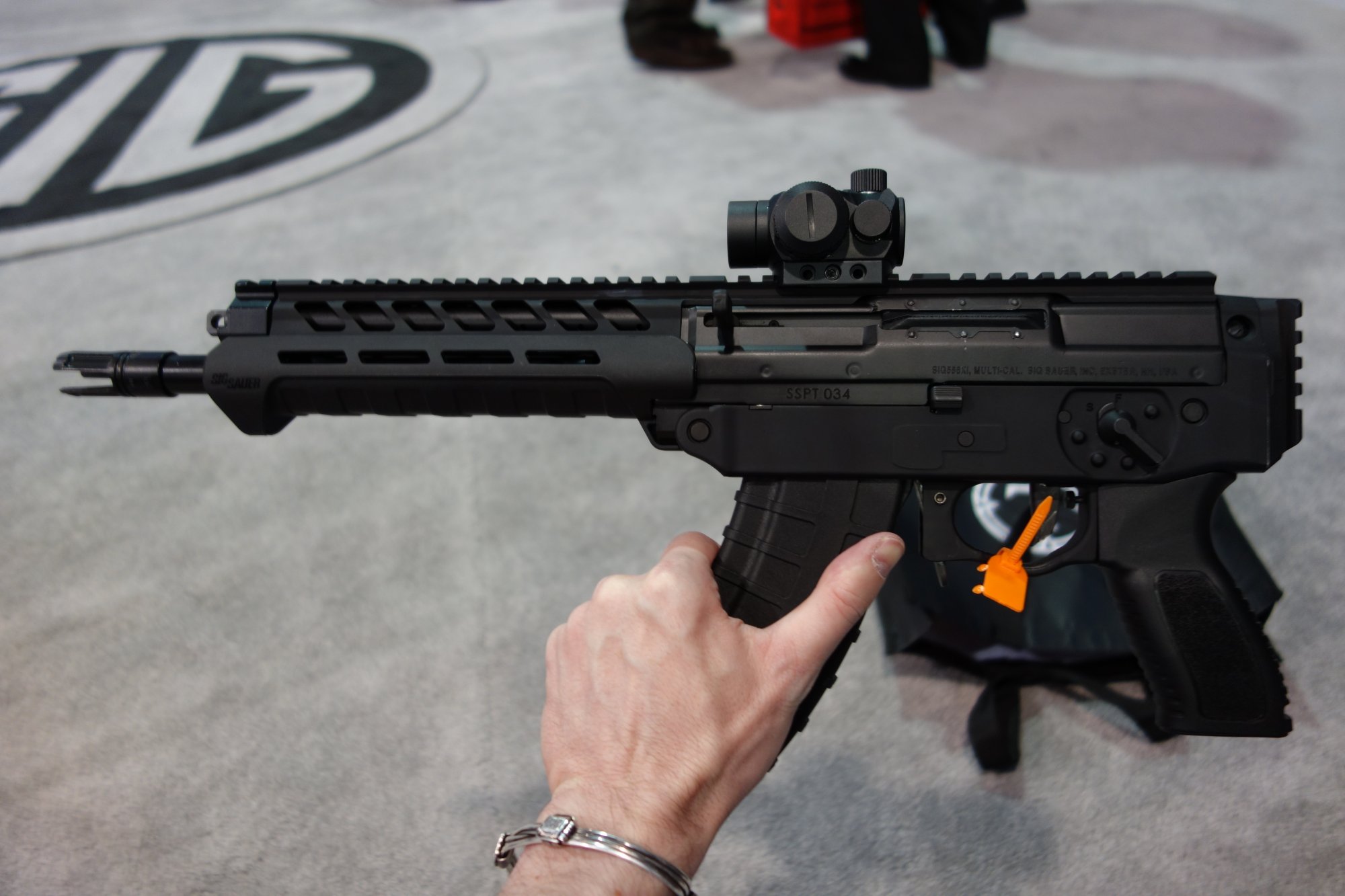 The SIG P320 pistols weren't the only new SIG SAUER products DefenseReview (DR) handled and photographed at the company's booth at SHOT Show 2014. The following day, we got a chance to play around with the SIG556xi multi-caliber (5.56mm NATO, 7.62x39mm, and 300BLK) semi-auto-only gas piston/op-rod (push-type operating rod) combat/tactical rifle/carbine/SBR (Short Barreled Rifle) in 7.62x39mm Russian configuration (with buttstock removed), which essentially turns the weapon into a modernized 21st-Century Kalashnikov AK-47/AKM that utilizes AK mags–an we really liked it. In fact, it was one of the cooler things DR saw at the show. 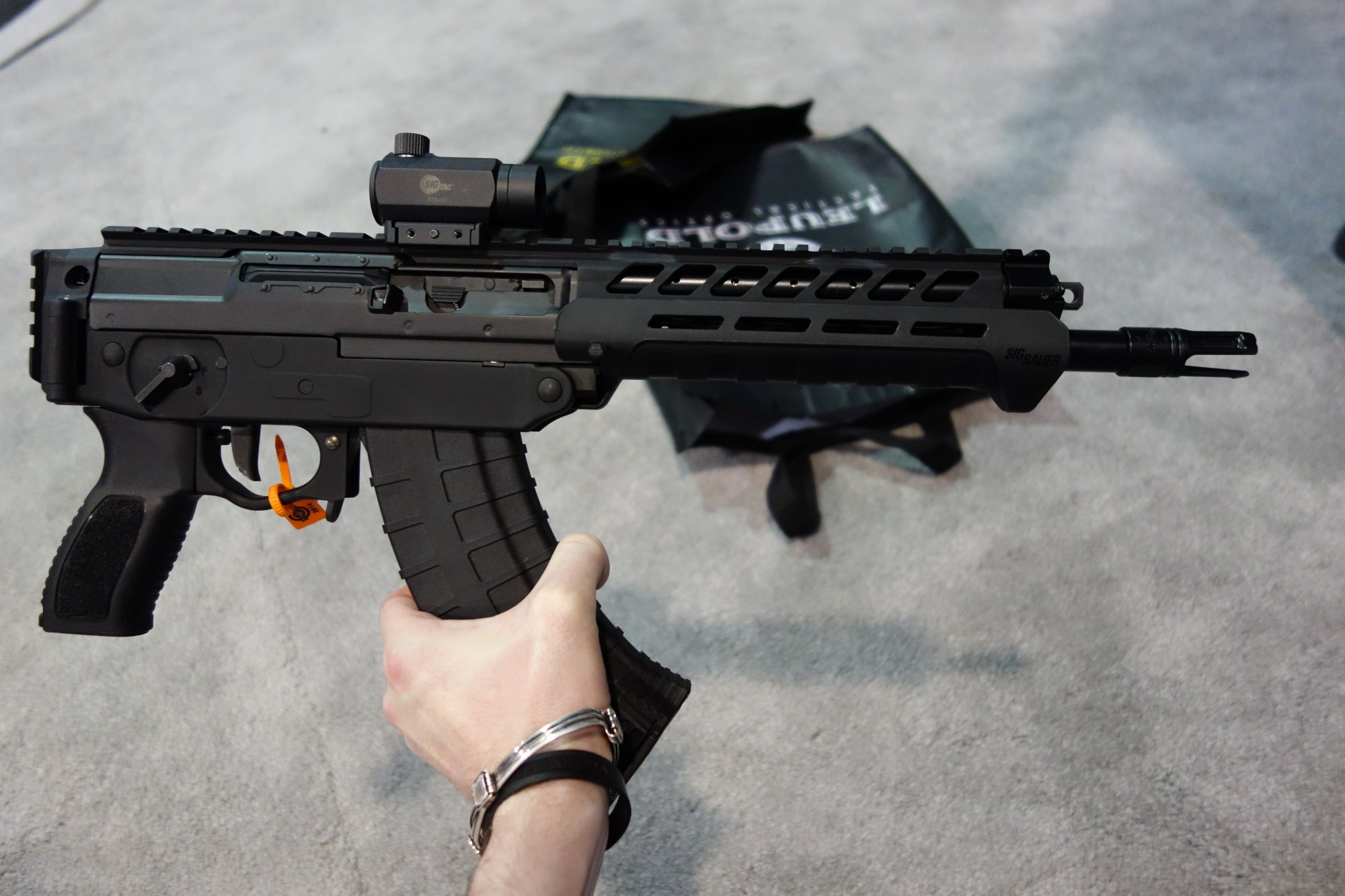 The one we handled and photographed sported a TAPCO INTRAFUSE 30-round polymer AK mag (black), but it will take any MILSPEC 7.62x39mm AK mag out there, including the US PALM AK30 Mag 30rd AK mag. The same goes for 5.56mm mags in the 5.56mm and 300BLK configs. In our opinion, the SIG556xi's 7.62x39mm AK-config capability, as part of the weapon's multi-caliber aspect, is its primary selling point, as we aren't sold on the idea of a quick-change barrel system being a superior alternative, or even equal alternative, to the AR-15/AR-10's hot-swappable upper receiver modularity. Interesting and less expensive? Perhaps. But, superior? No. 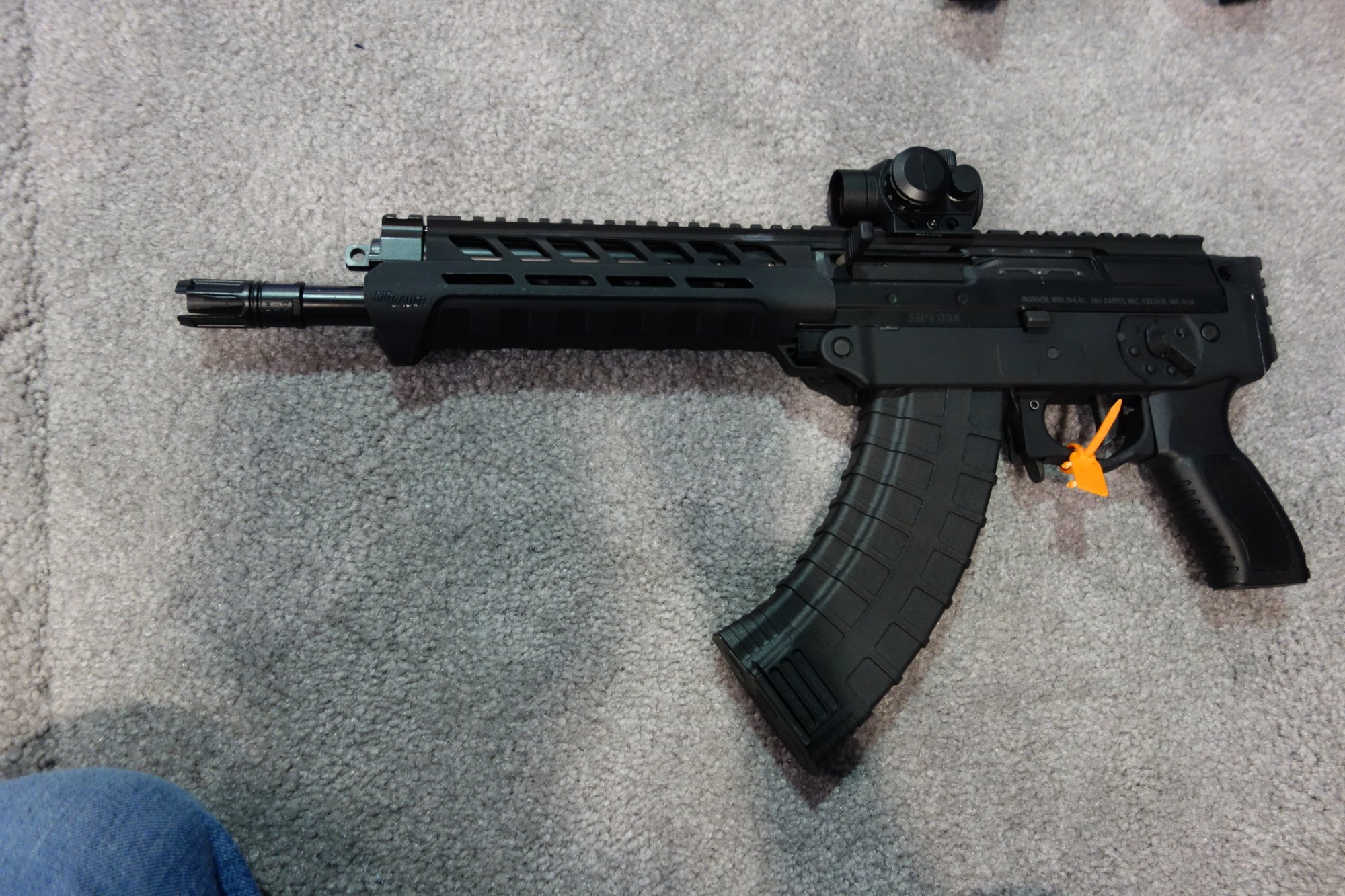 Why not? Understand that any time you change barrel lengths or calibers on a quick-change barrel system gun like the SIG556xi, FN SCAR (MK 16 SCAR-L and MK 17 SCAR-H) and Beretta ARX-160, you're going to have to re-zero your optics and/or change optics, period. With the AR-15/AR-10 platform, you can pre-zero your optics for a specific upper receiver, barrel length and caliber, so when you swap uppers (and mags)–which takes all of about 30-seconds or less–you're ready to go fight or shoot, immediately. Sure an entire upper receiver assembly/optic combo is more expensive, but it's also more practical in the real world, whether you're running a gun at the range or in combat. It's (AR platform) faster and truly modular. 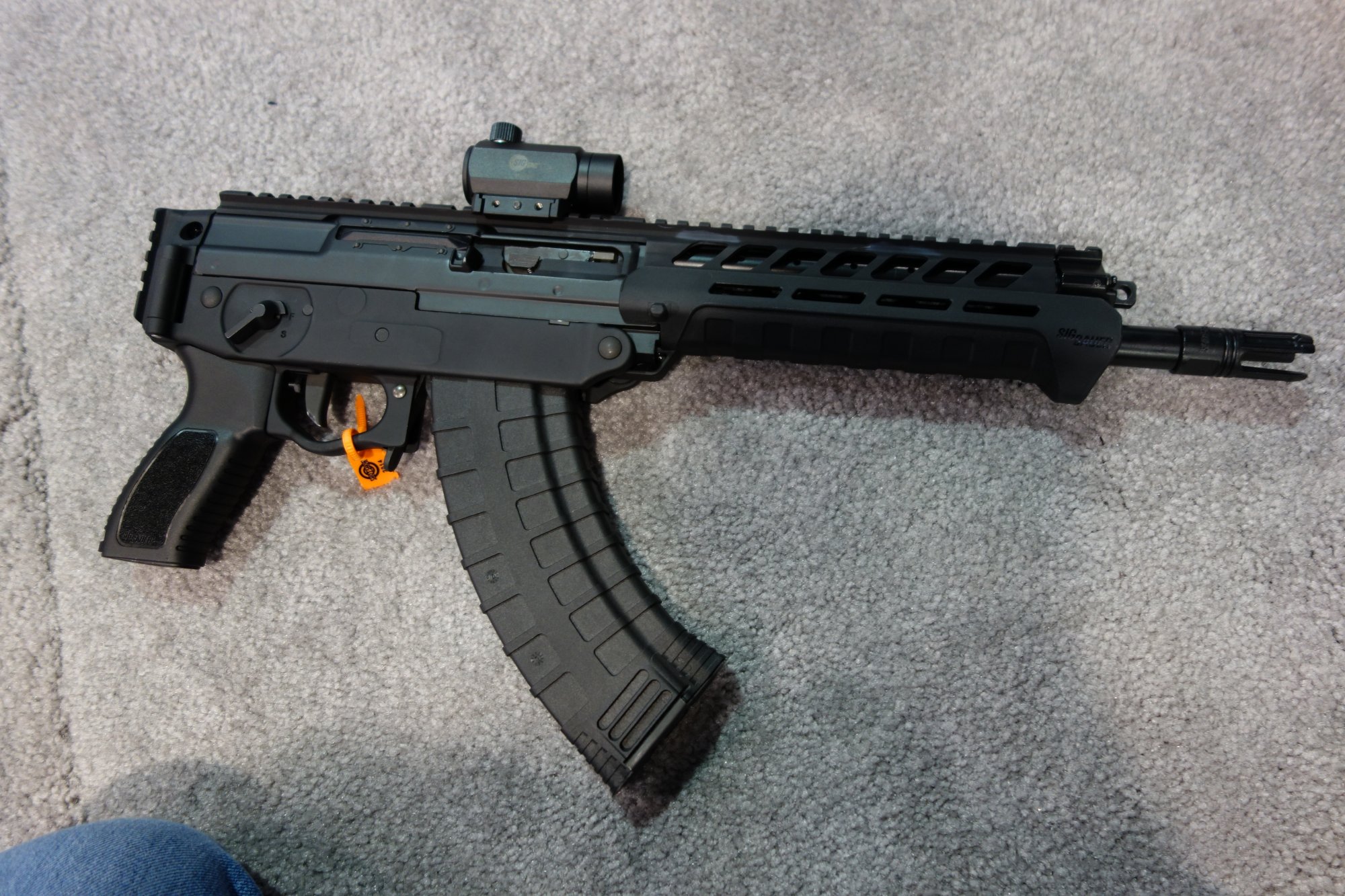 Don't get us wrong, QCB (Quick Change Barrel) systems are cool and all, but, in general, we still prefer the AR upper-swap system for small-caliber weapons from 5.56mm to 7.62x51mm calibers.

But, getting back to the SIG556xi multi-caliber tactical/combat carbine/SBR, we really like the way the weapon looked and felt in 7.62mm Russian Kalashnikov AKM-type config, and we're just sorry we didn't get a chance to fire it at SHOT Show Media Day at the Range 2014. Of course, we'd prefer to configure it with the optional MIL-STD-1913 "Picatinny" rail system/forend rail tube to complement the rail on the top of the upper receiver/receiver cover.

While we prefer the AR-15 platform in both direct-gas-impingement (DGI) an gas piston/op-rod (push-type operating rod) designs for 5.56mm NATO (5.56x45mm NATO) and 300 AAC Blackout (300BLK) calibers, where we can just swap uppers and loaded mags real quick, we wouldn't mind having a SIG 556xi in our collection, as well, especially since we can configure it like an AK–assuming the gun's a runner. It's just a nice, modular gun. Our one recommendation to SIG SAUER at the moment would be to develop a 5.45x39mm caliber conversion capability, since it's a great caliber that's accurate to longer range, easier to shoot, and less expensive than 7.62x39mm ammo. A 5.45mm Russian modular option (and perhaps also a 6.8 SPC conversion kit, as well) would really round out the package, in our opinion. It would seem logical that a select-fire version of the SIG556xi will be offered for MIL/LE end-users, but we forgot to ask about this, so we're not yet sure. 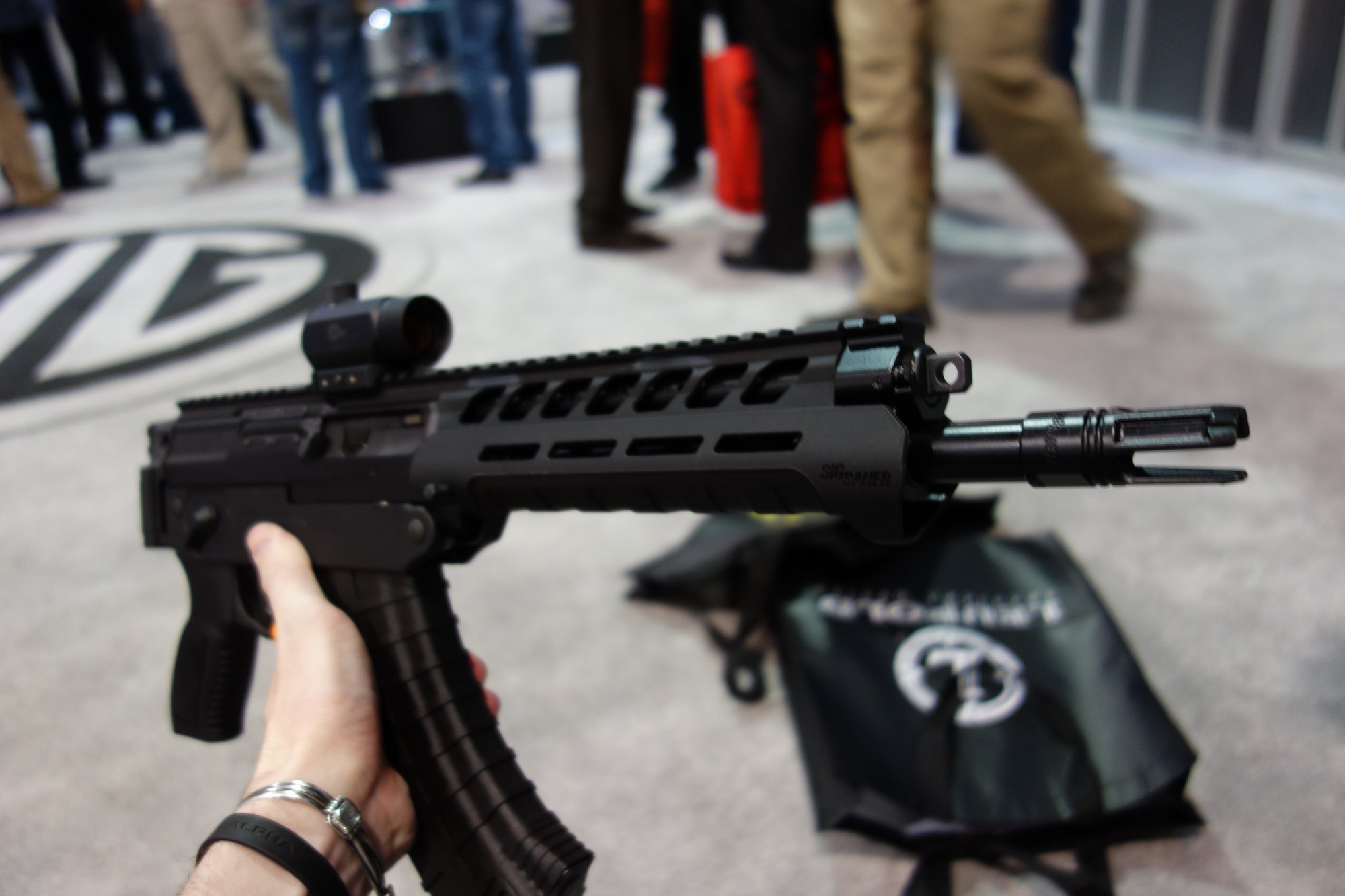 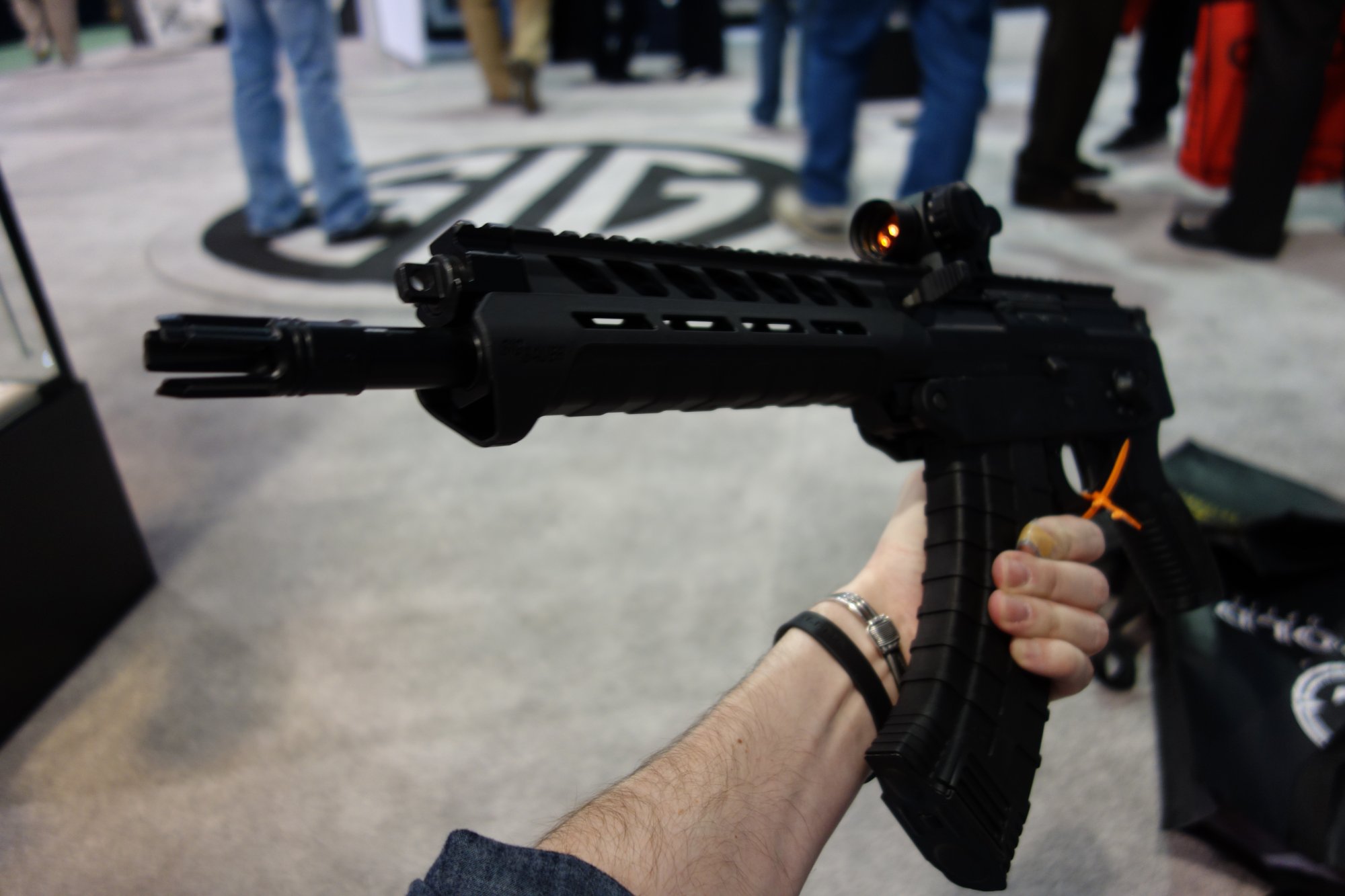 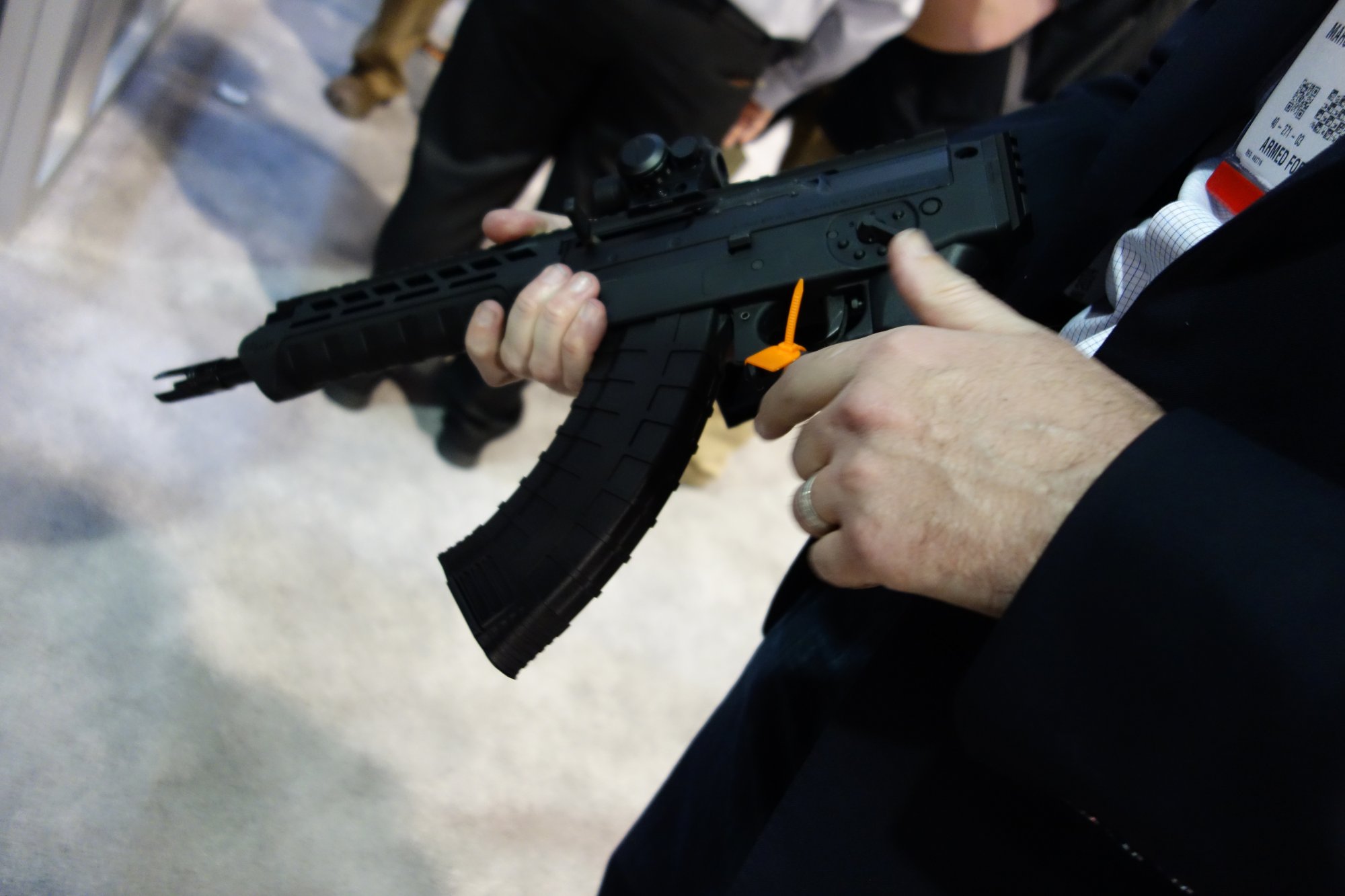 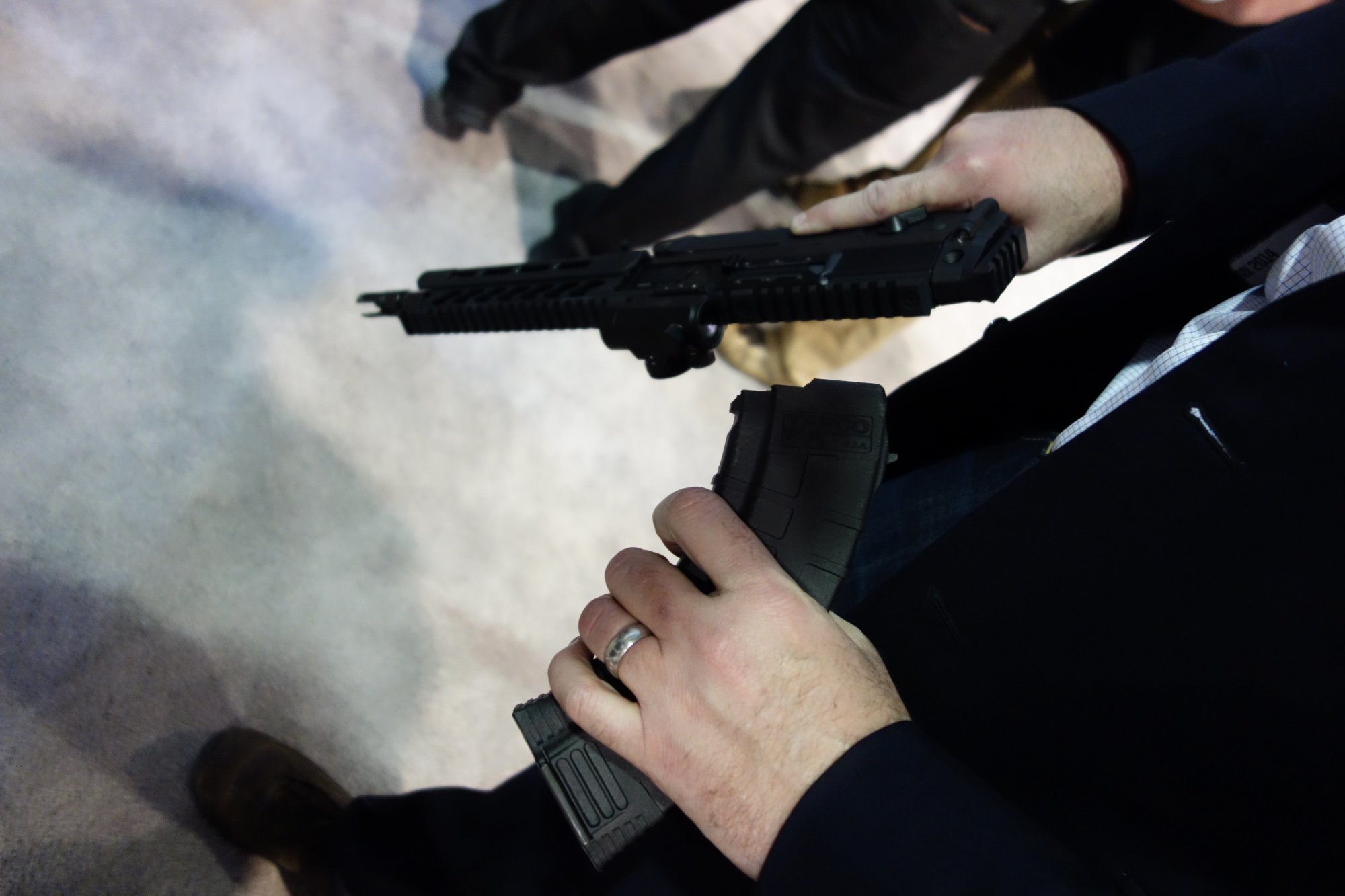 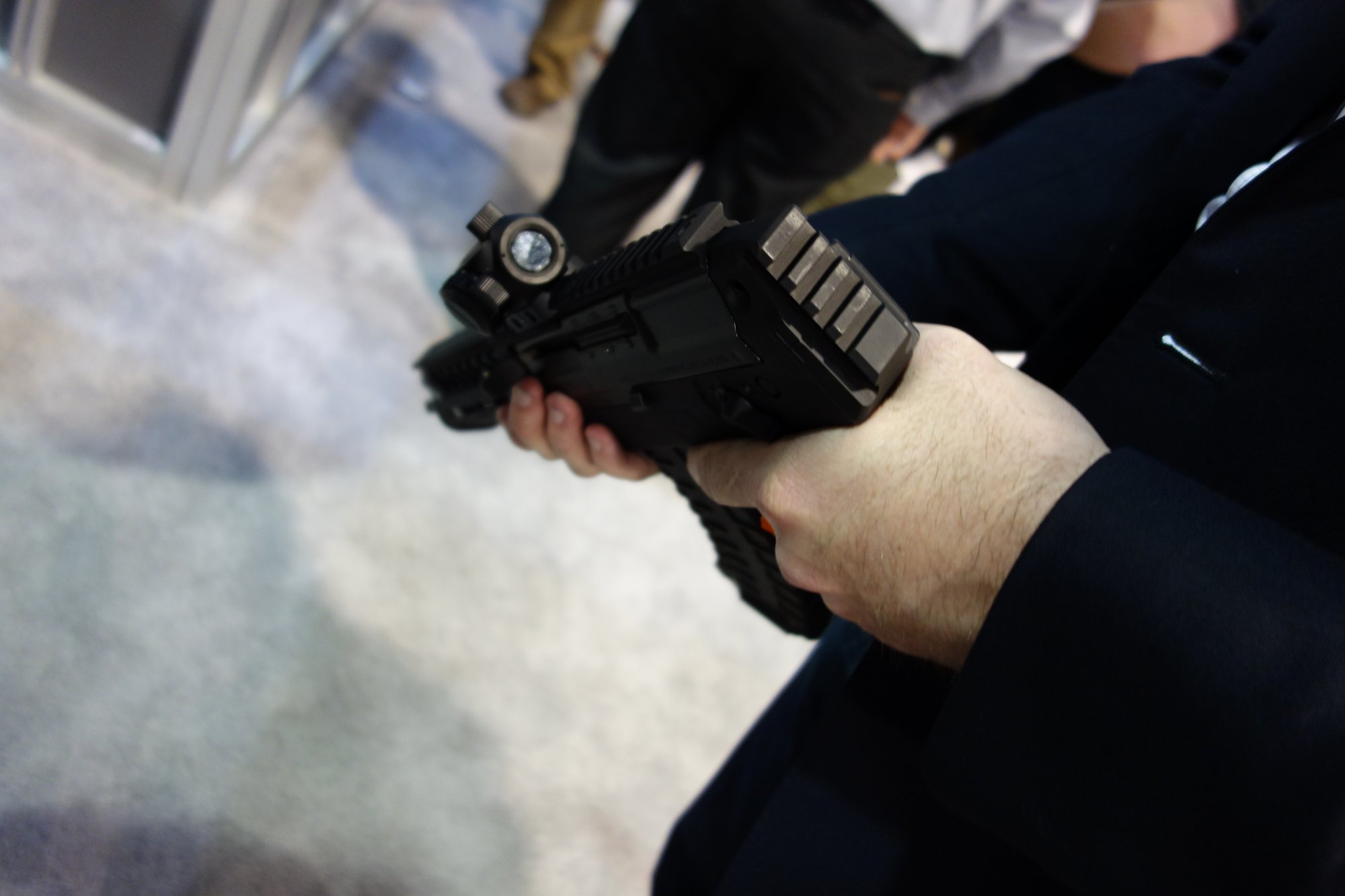 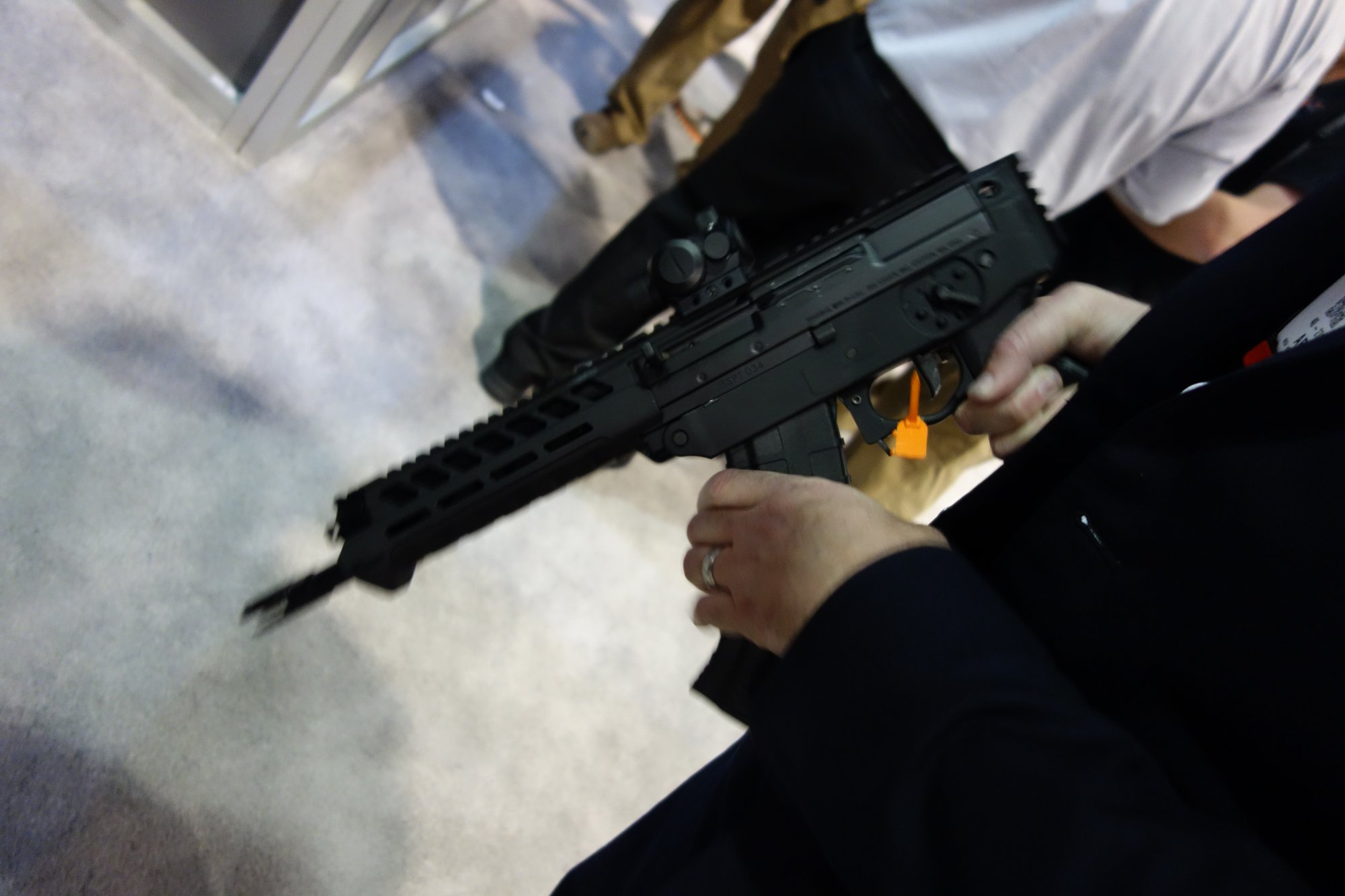 The following information on the SIG SAUER SIG556xi comes directly from the company's website:

"Introducing the SIG556xi, rewriting the standard for modularity, reliability, and performance for the modern rifle platform. Based on the legendary SG 550, the SIG556xi will change the way military, law enforcement, and responsible citizens look at adaptable rifles. Utilizing the time-tested rotating bolt and adjustable gas piston operating system, the SIG556xi allows operators a choice of caliber, barrel length, handguard/stock configurations and lower receivers.

A removable barrel allows the operator to select the necessary length for a given mission. Adding the appropriate bolt, the SIG556xi can be changed to any of three calibers, 5.56x45mm NATO, 300 Blackout, and 7.62x39mm NATO. Users can also quickly change out the non-serialized lower receiver, allowing the use of either AR-style STANAG magazines or rock-and-lock AK-style magazines. The SIG556xi upper receiver is the serialized part, making the lower an easy to purchase part.

Polymer handguards accept all Magpul® light and rail kits, while the aluminum and carbon fiber handguards accept 2”, 4”, and 6” M1913 rails. Barrels are available in 10”, 14.5”, and 16”. Truly ambidextrous, the SIG556xi features an ambi safety selector, magazine release and user swappable charging handle (right- or left-handed). Optional receiver end plates allow for the use of either AR receiver extension tubes and buttstocks or M1913 compatible stocks.

Thanks to a redesigned trigger package, the military and law enforcement versions of the SIG556xi are capable of full-auto fire in every caliber, including 7.62x39mm. The Russian lower has been thoroughly function tested with many available AK magazines, including US P.A.L.M."