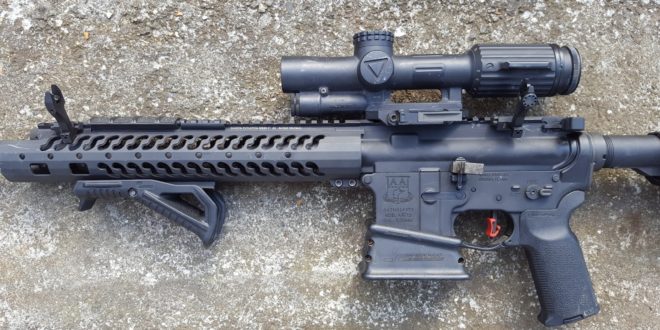 Born out of 3-Gun competition, offset back up iron sights (BUIS) are slowly taking over as the norm on both competition and general purpose AR-15’s. The advantage they offer over traditional BUIS: With just a slight inward turn of the rifle, you have an almost effortless transition between primary optic and irons. Additionally you can run the iron sights up all the time if you desire and they do not obscure in anyway. The lens or viewing area of the optic. 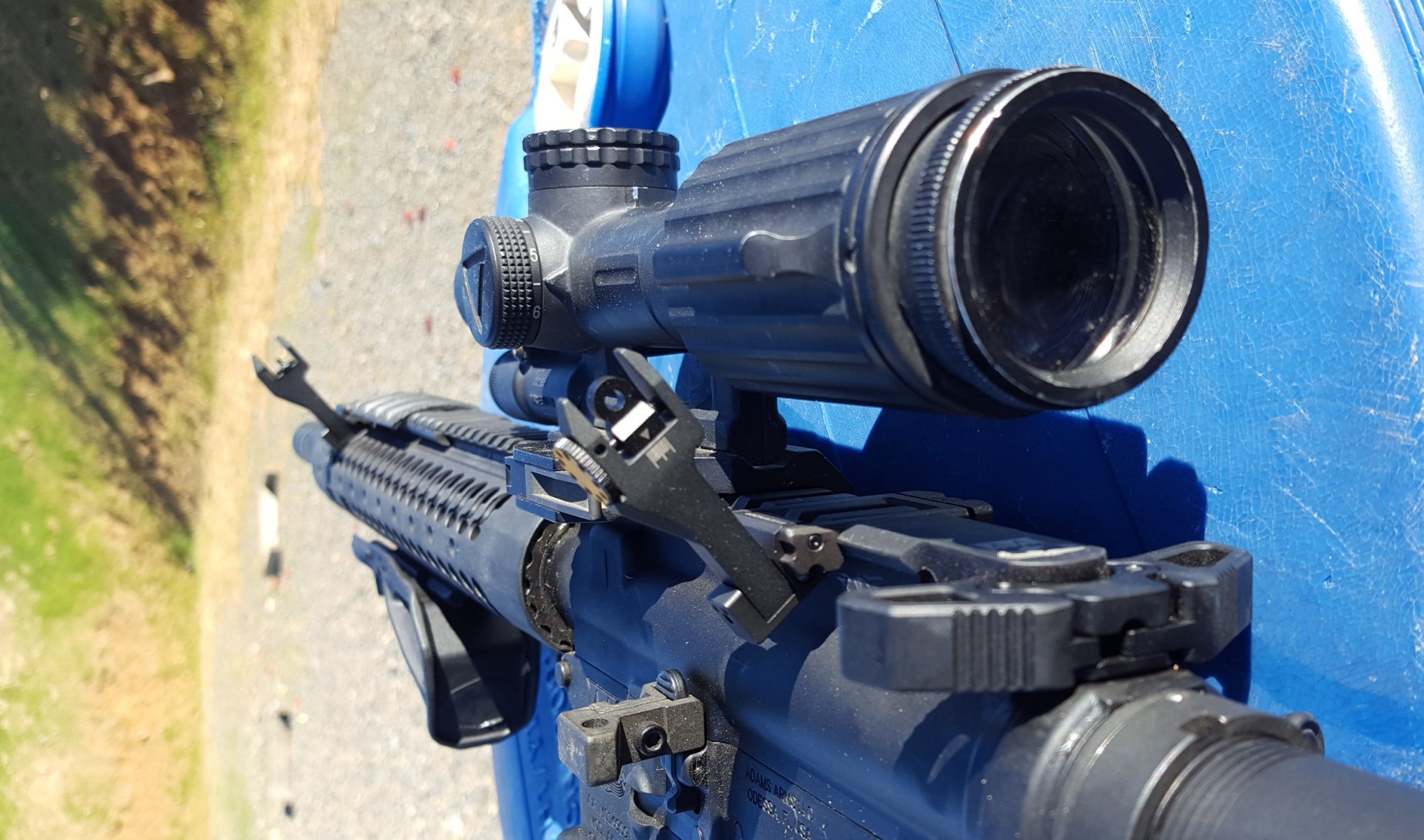 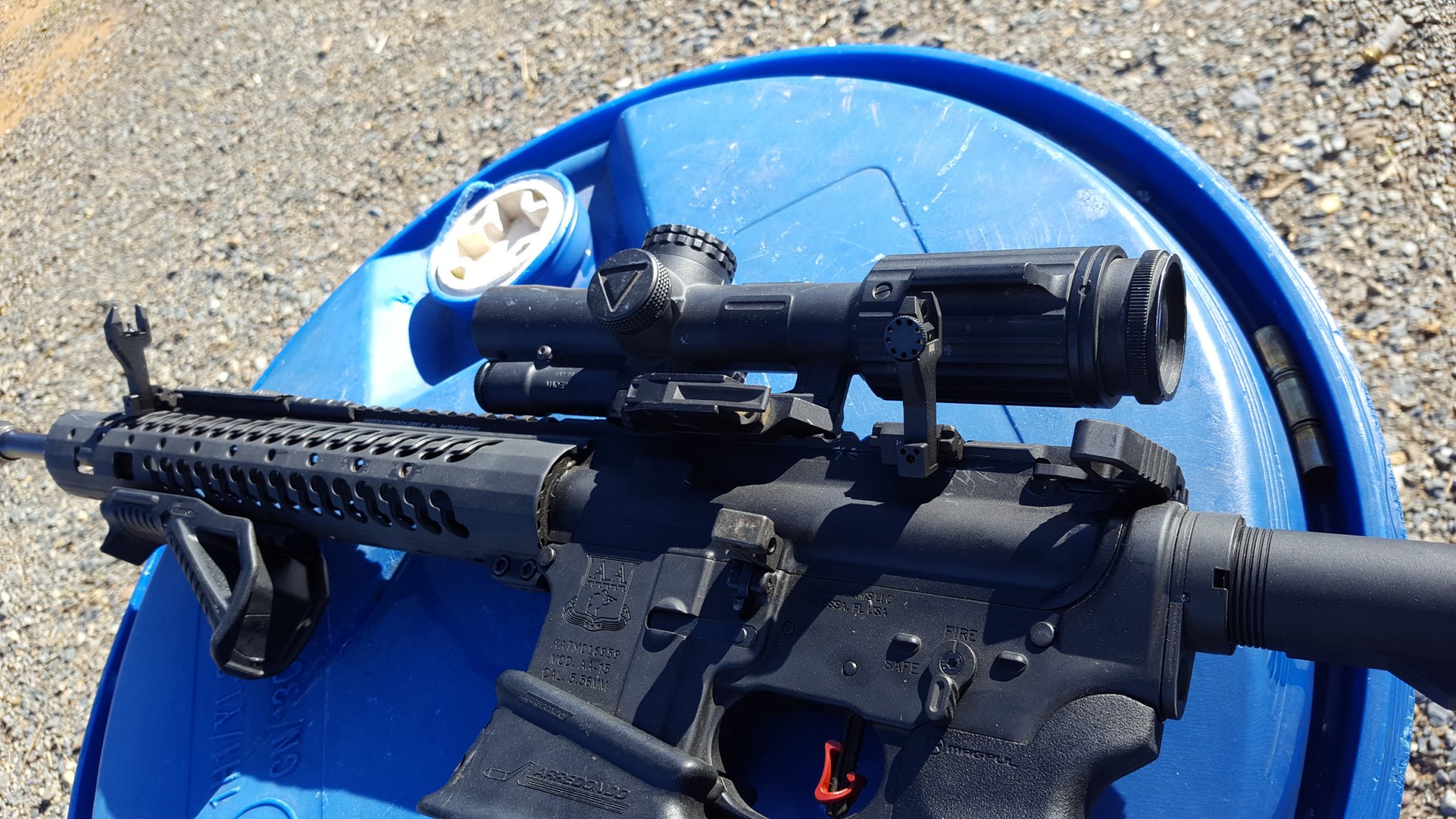 For the last month, I’ve been testing and evaluating the Strike Industries SI Sidewinder BUIS offset BUIS (Back Up Iron Sights, front and rear) for DR (DefenseReview). Minimalist in design, the SI Sidewinder BUIS take up very little space on the rifle, yet still provide everything you need in a set of irons. In fact, the part of the Sidewinder sight that attaches to the rail sits totally flush on the rifle, making it perfect for use with the most popular 30mm tube style optics such as the Vortex Razor HD and Trijicon VCOG. 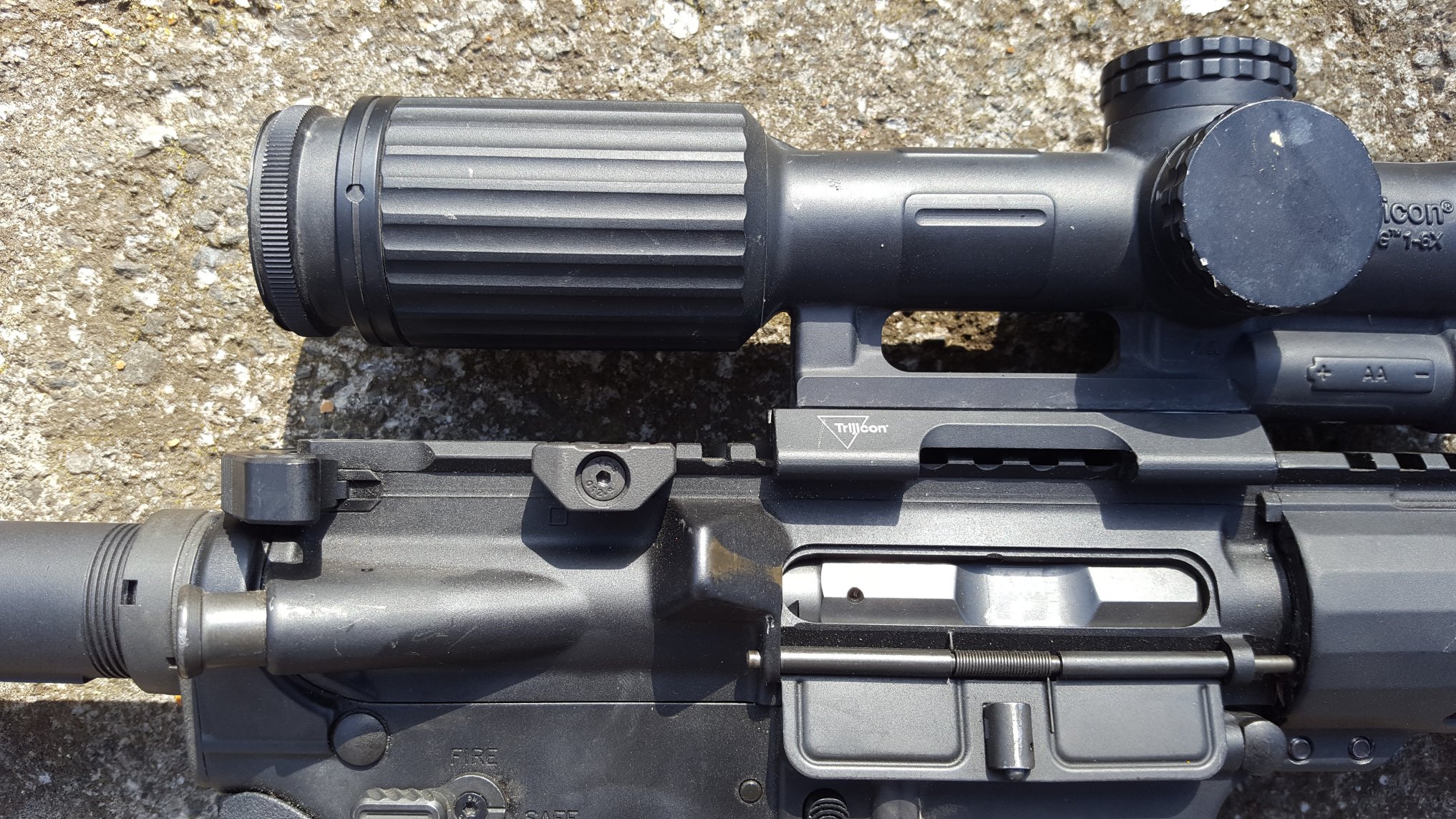 So low-profile from the opposite side that you can barely tell there is a set of BUIS on the rifle.

One of the reasons a lot of shooters (including some soldiers and myself) have opted out of running BUIS on the rifles and carbines is there’s just simply no room, depending on the optic and where it is mounted, for proper eye relief. (See Competition to Combat Crossover Part III). Using a set of offset iron sights solves this issue, especially with the very low profile of the SI Sidewinder sights.

The SI Sidewinder BUIS sights come in at 3.4 oz total and adjust for both elevation (front sight) and windage on the rear. While there’s only one aperture on the rear sight, it’s like most of your back-up iron sights today. The opening is comparable to the 200m aperture of the A2 sight, perfect for shooting at speed at close targets, and adequate enough for long-range shooting around 200-300 meters. I shot out to 200 meters, getting hits on IPSC C-zone steel with no problem. 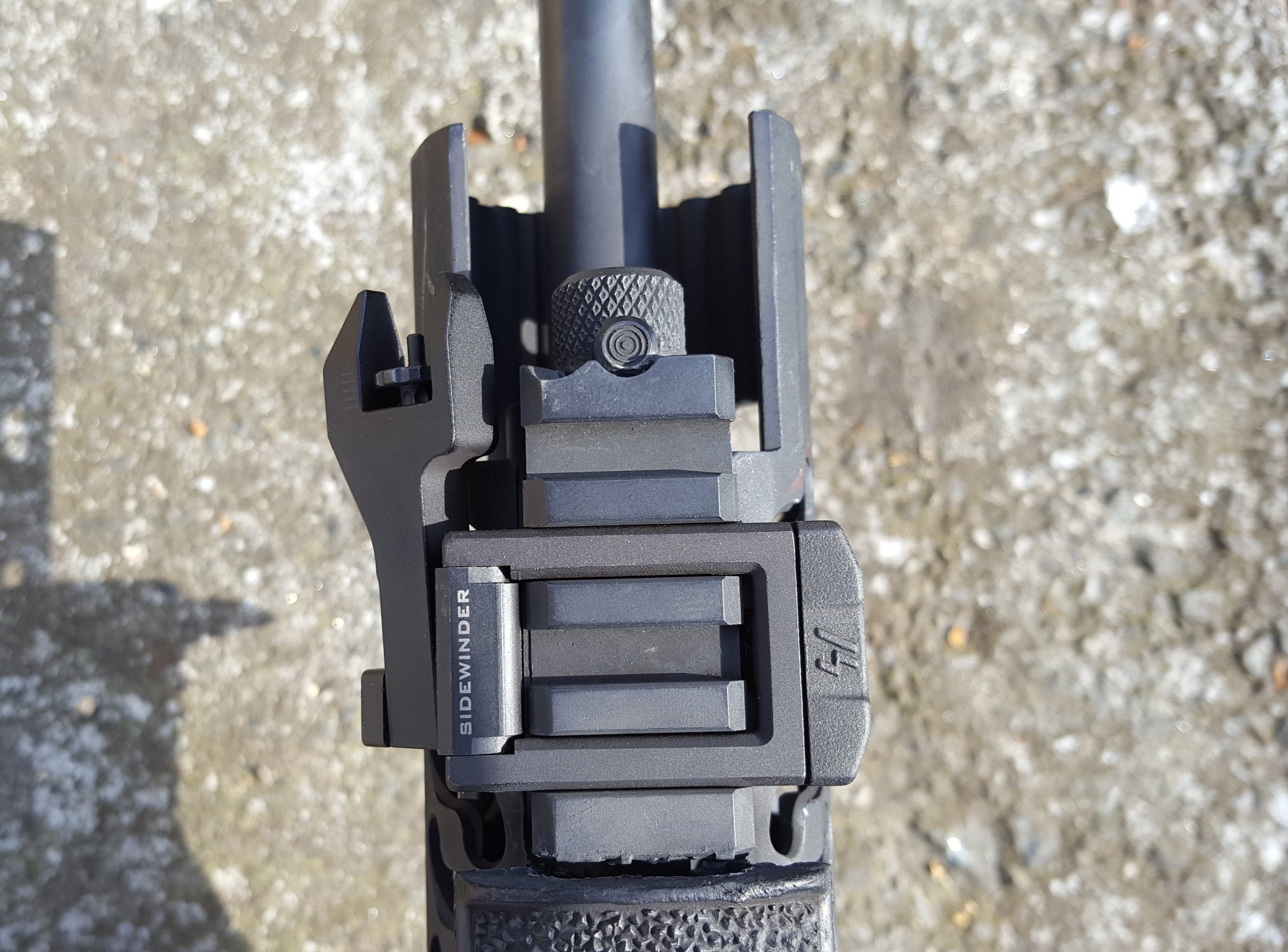 Made out of metal, so no worries about heat damaging them. Here’s the front sight folded down (forward) for a lefty shooter. 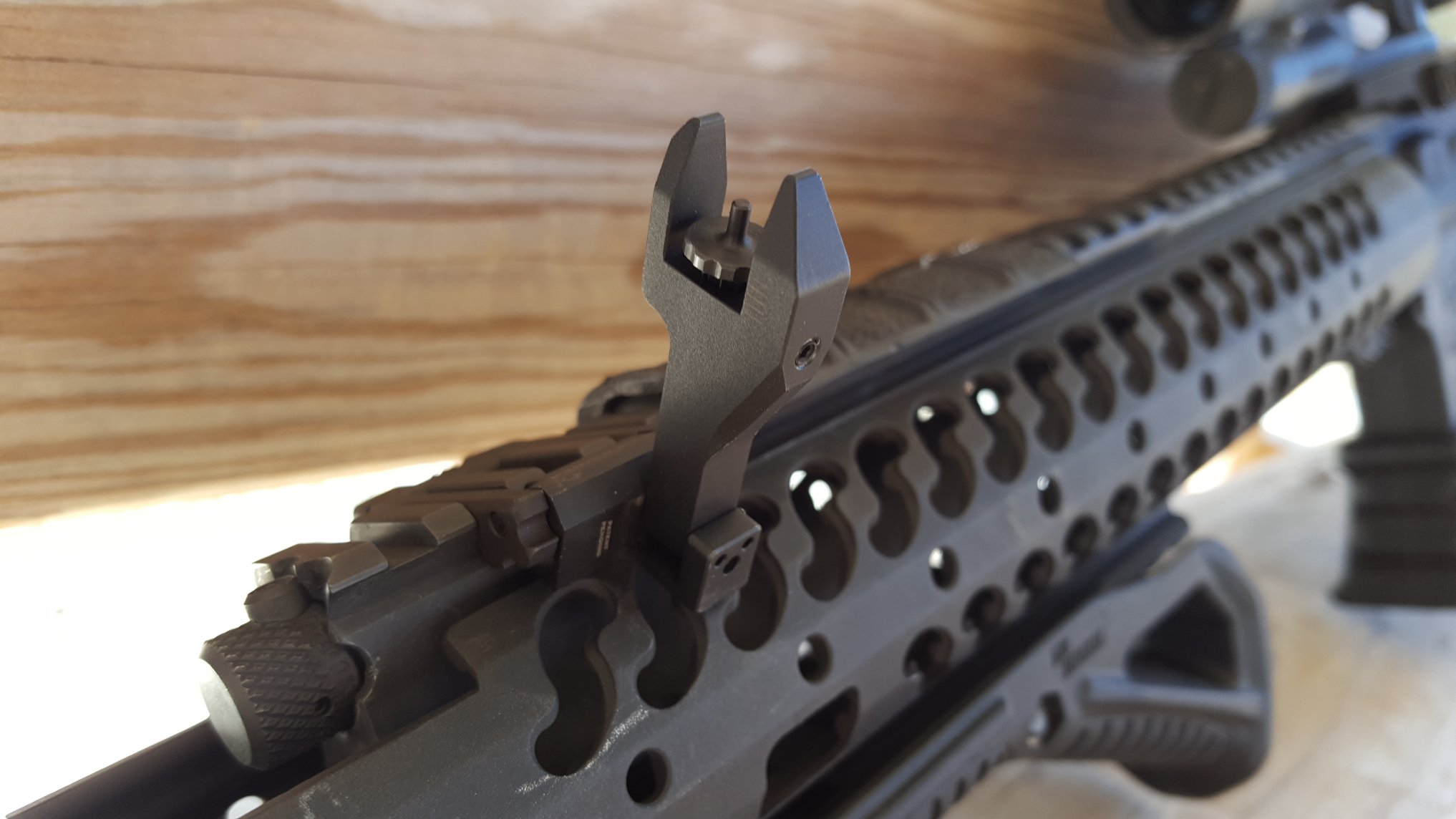 Attention to detail: The Sidewinder front sight has adjustment markings on both sides, allowing both left and right handed shooters to see marks, regardless of which side it’s mounted to the rifle.

They can be mounted for both left and right-handed shooters (just turn them around on the gun). As a lefty, the sights fold down forward towards the muzzle. During firing, they stayed put whether I had set them up for shooting, or down to keep them out of the way. A cool feature the Sidewinder sights is the ability to cam over to the 12 o’clock position on the rifle. 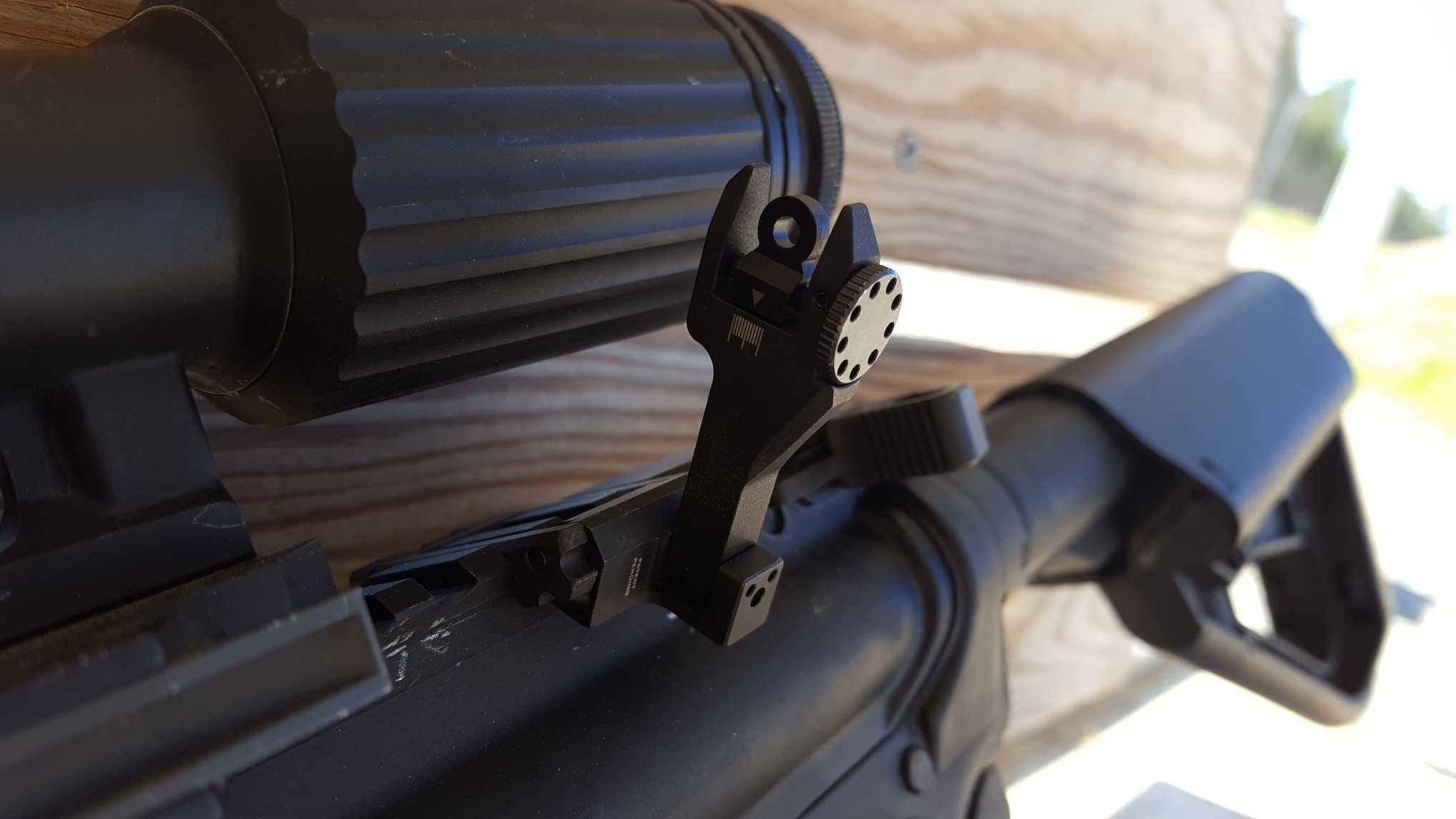 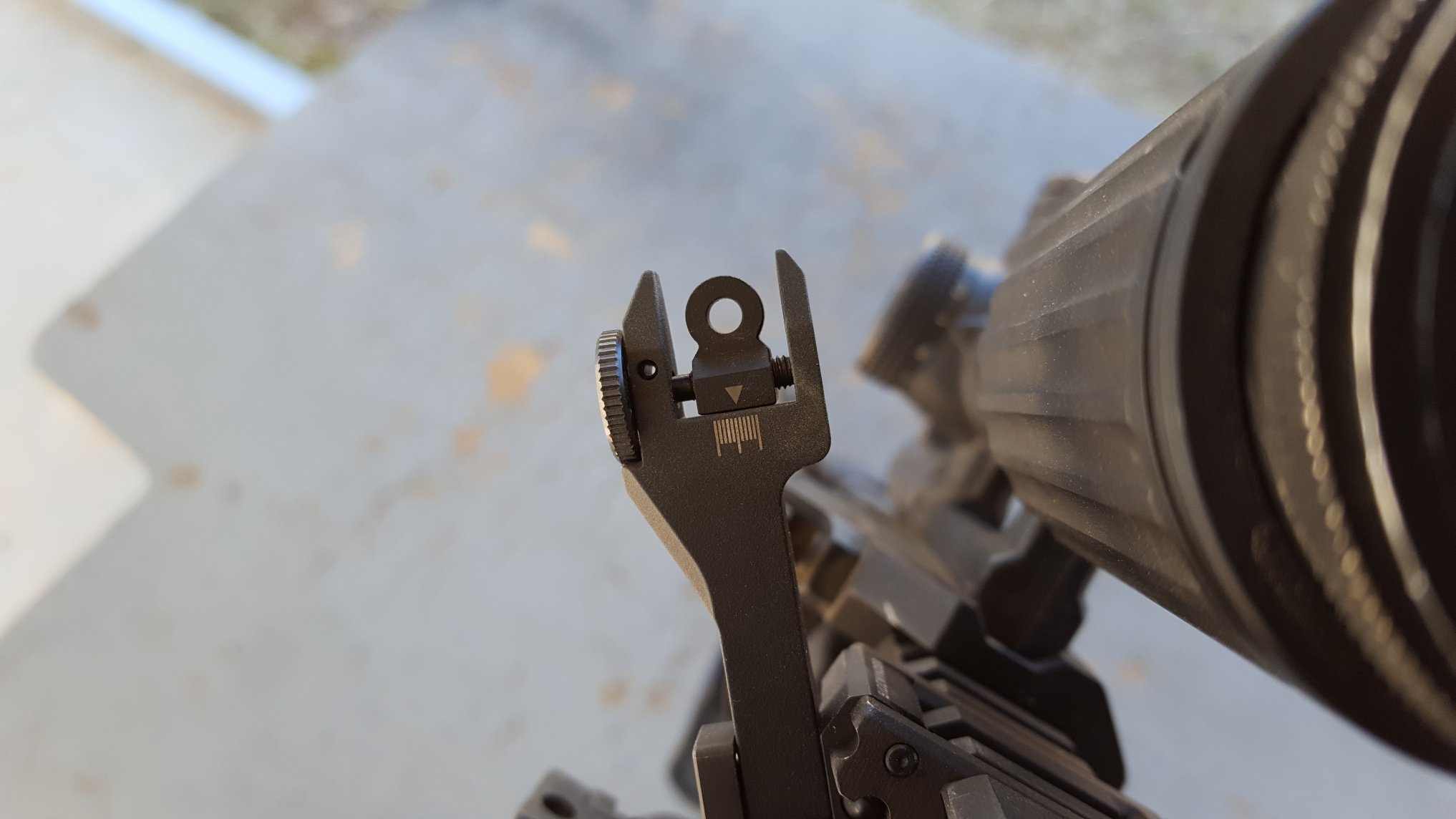 Front and rear look at the Sidewinder rear sight. Again, note marking on both sides. Also note the fairly large adjustment knob (allowing for use with gloves on). Also notice the positive click adjustment when turned.

Once flipped up, you can tilt the SI Sidewinder BUIS over so the front sight and rear aperture sits over the gas block and receiver of the rifle. So, you don’t have to tilt the rifle inward to pick them up. Granted, it puts your front sight post at an angle, so you would have to take this into account during the zeroing process. But, for those who might want to be able to hold the rifle without canting it, the SI Sidewinder BUIS sights do offer this capability.

I’ll admit that while I am very used to running a 45-degree offset MRDS (Mini Red Dot Sight), I haven’t played around with offset irons a lot. My thoughts on the SI Sidewinder BUIS sights; to be blunt, I love them! In fact, I would replace all my traditional fold-down/flip-up BUIS with Sidewinders if given the opportunity. Reason? That’s easy: the super minimalist design. They’re so compact, you don’t even notice them on rifle until you need them. (I’m frankly not a fan of always running BUIS always up, anyway).

These SI Sidewinder BUIS sights are very compact, yet when they’re up, they do the job. Using them, I had no problem achieving a good sight picture and shooting at speed. In combat, during my last tour in Afghanistan, I utilized a 1-6 power Trijicon VCOG and an issued EOTech MRDS on a 45-degree offset mount. I kept the VCOG almost exclusively on 6 power the whole time, relying on the offset EOTech for anything under 100 meters.

If all I had were these SI Sidewinder BUIS instead of the EOTech mini red dot, I would not have felt held back in anyway, in terms of capability to engage targets up close. Actually, once during the deployment, I had an issue with the EOTech. While it was raining on a mission, the lens got wet. For some reason, it messed up the coating, and the sight became permanently blurry. Had I been using BUIS sights like the Sidewinder, this would have been a non-issue.

Need a compact-yet-sturdy set of 45-degree offset sights for your AR? The Sidewinder offset BUIS from Strike Industries are the answer. They’re super-minimalist, and yet provide everything required of back up iron sights for engaging both near and mid-range targets. Whether it’s a 3-Gun match, or clearing a house in CQB, these sights allow you the capability to handle both situations. I STRONGLY recommend you give them a look. 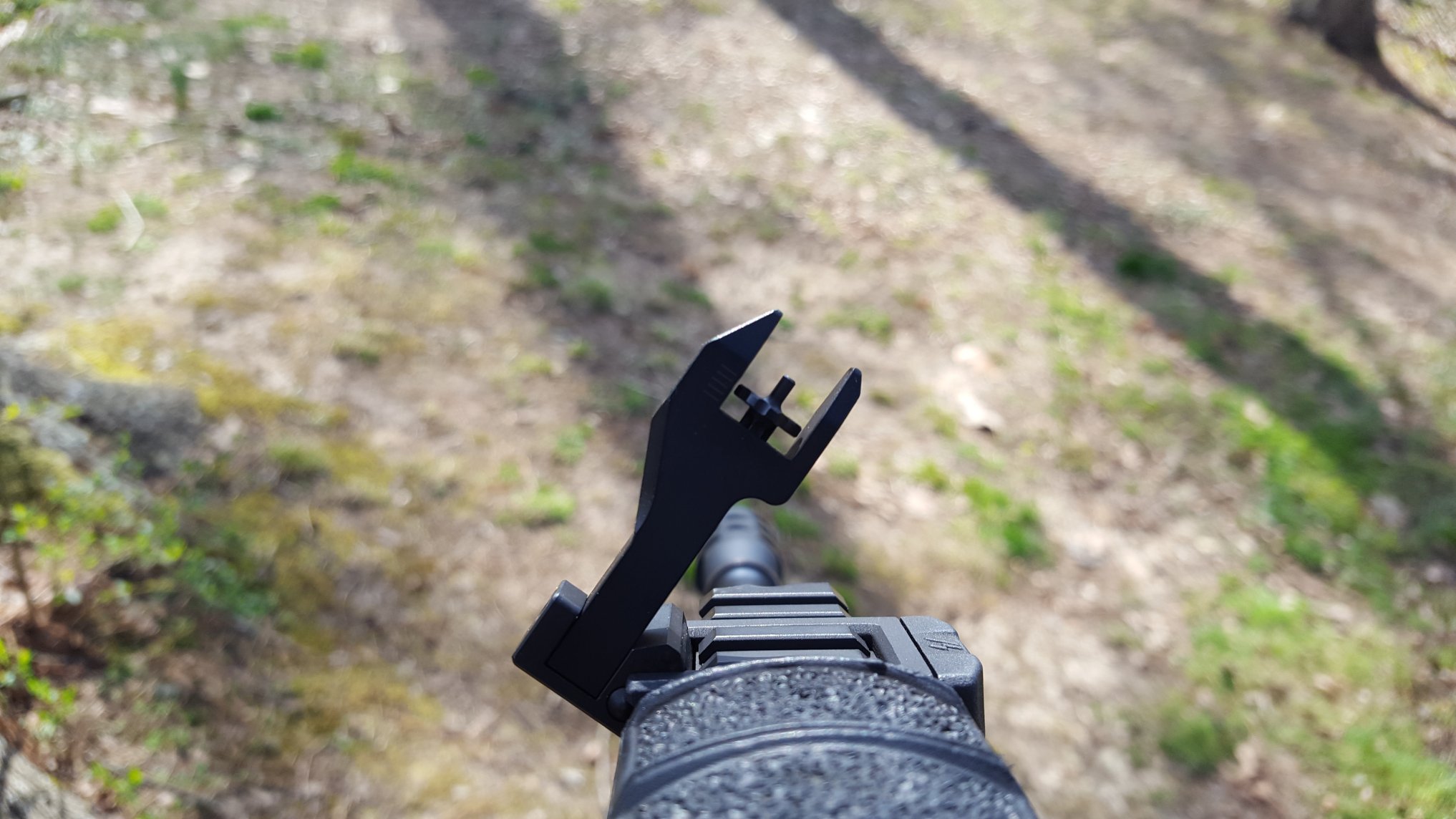 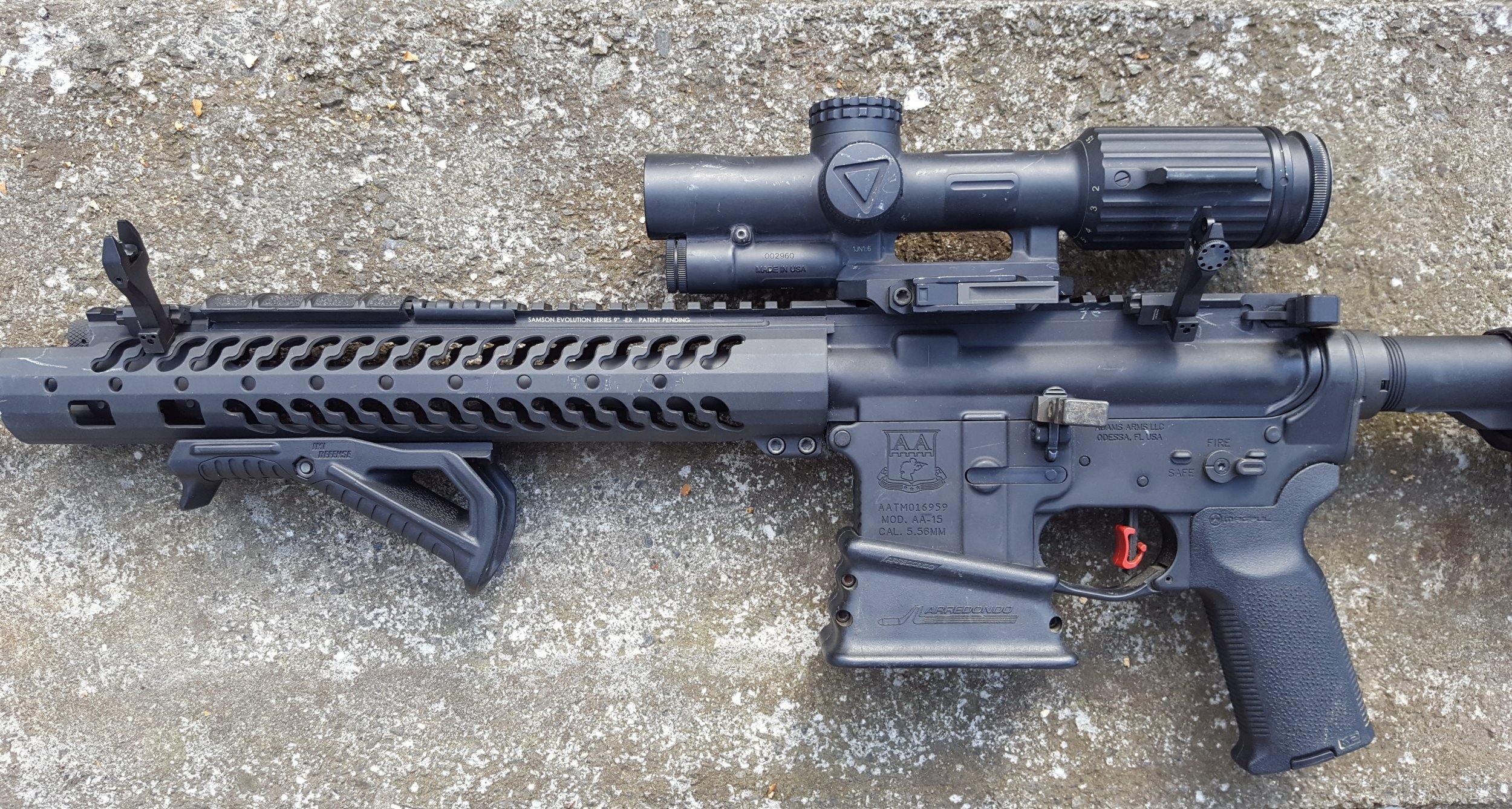