“Geographically speaking, Afghanistan is ungovernable. It’s a recipe for a failed state” 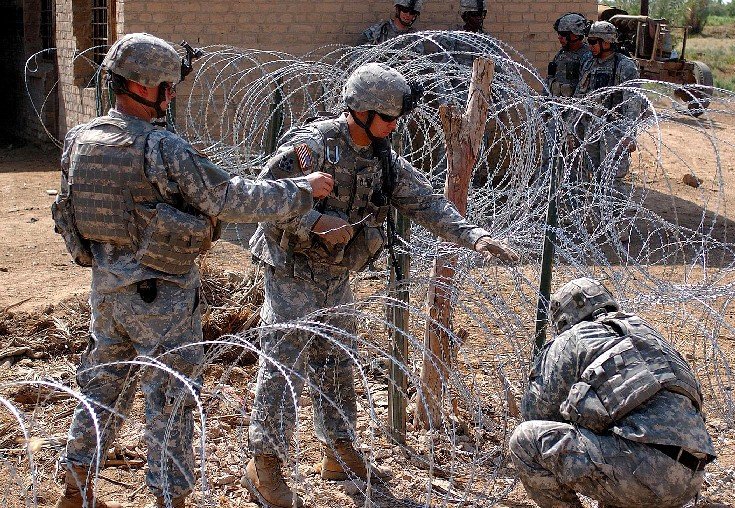 The April 2009 Armed Forces Journal (AFJ) on page 18 reports we are going to spend more than last year’s $36.5 BILLION occupying Afghanistan with 34,000 U.S. troops in 2008, yet Taliban violence is rising. This despite the ill-conceived, planned influx of more U.S. troops (60,000+ total) which is sure to cause the locals to reject us as proof-positive that we are “foreigners intruding on their land” as the rebels label us, and yet not provide anywhere near enough manpower to seal off the long Afghan-Pakistan (AFPAK) border.

Our assistance, to date, has been to try to make the Afghans into mirror images of our inefficient selves; running around the countryside chasing rebels free to come and go as they please from sanctuaries in Pakistan while we are limited in wheeled trucks packed with foot-slogging gunslingers and getting blown up by rebel land mines on roads. Land mine attacks rose from zero (with just 12 overall combat deaths) in 2001 to 3,276 in 2008 with 155 U.S. Soldier and marine deaths last year alone.

For a civilian assistance example of our malpractice, we buy the Afghanis complicated firetrucks they lack the know-how to maintain. And, to add insult-to-injury, when a fire recently broke out in Kabul, they were too big to pass through the narrow streets and a whole city block—including the new school we built–burned down due to Taliban arsonists. One cannot help but think of the sad ending of the movie chronicle of Congressman Charlie Wilson’s War, where the Americans only wanted to fund killing “bad guys” and not build anything useful for the Afghans. Although we now do so grudgingly today, we do it without first securing the borders to prevent the “bad guys” from burning the schools down.

Win the Battle Against the Earth (TBATE)

If we want to really help the Afghanis and Pakistanis–then we need to help them with WHAT THEY NEED, not do WHAT WE WANT TO DO, JUST BECAUSE IT MAKES US FEEL GOOD.  Running around killing “ragheads” in an uncontrolled, non-linear mess is like bailing water out of a boat with huge holes in it. Securing Afghanistan for Afghanis should be about them, not us.

And what they need is a Morice Line-type security fence all around the country to keep Taliban and Al Quada trouble-makers out to seal the “leaks” before turning on the “bilge pumps”; leveraging the rugged Afghan-Pakistan landscape as an asset rather than a liability. This is not Rudyard Kipling’s 19th century situation; we have bulldozers, explosives, aircraft and powered machines to turn even the most rugged terrain into what we want it to be, so it’s clear Zeihan’s defeatist statement is more bunk from another kill-ragheads-with-more-gunslingers peddler.

Moreover, DoD refuses to face the truth that if we do not first win the Battle Against the Earth (TBATE), but instead proceed rashly to the Battle Against Man (TBAM) because it excites us to go shoot people and blow things up, we surrender the initiative and the leverage of terrain and weather to the enemy, which can in turn doom us to defeat. This lie that we somehow cannot afford an AFPAK border fence will not wash in light of the $36+ BILLION we spend each year offering military and civilian malpractice that reacts to symptoms and ignores the causative illness of a country without secure physical borders.

Today’s self-proclaimed, counter-insurgency (COIN) “experts” are quick to boast that they are “students” of successful COIN practices in the past, but the COINsters conveniently forget to mention anything other than gunslinging with boots-on-the-ground and refuse to admit to the necessity of economy of force to use COMBAT ENGINEERING—not more foreign troops–to secure the sub-national conflict (SNC) area from outside interference and deny internally-created rebels a safe haven in the nation-state next door—walls, barriers and fences that worked amazingly well in Algeria and Germany and keeps South Korea and Israel safe today. 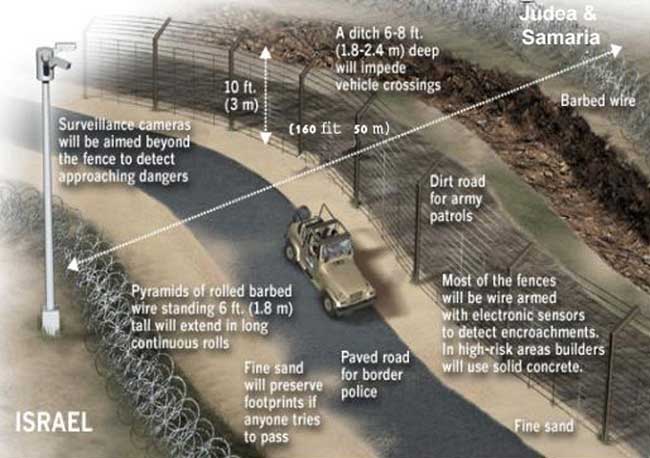 During the 34 months from the beginning of the violence in September 2000 until the construction of the first continuous segment of the security fence at the end of July 2003, Samaria-based terrorists carried out 73 attacks in which 293 Israelis were killed and 1950 wounded. In the 11 months between the erection of the first segment at the beginning of August 2003 and the end of June 2004, only three attacks were successful, and all three occurred in the first half of 2003.

Since construction of the fence began, the number of attacks has declined by more than 90%. The number of Israelis murdered and wounded has decreased by more than 70% and 85%, respectively, after erection of the fence. Even the Palestinian terrorists have addmitted the fence is a deterrent. On November 11, 2006, Islamic Jihad leader Abdallah Ramadan Shalah said on Al-Manar TV the terrorist organizations had every intention of continuing suicide bombing attacks, but that their timing and the possibility of implementing them from the West Bank depended on other factors. “For example,” he said, “there is the separation fence, which is an obstacle to the resistance, and if it were not there the situation would be entirely different.” 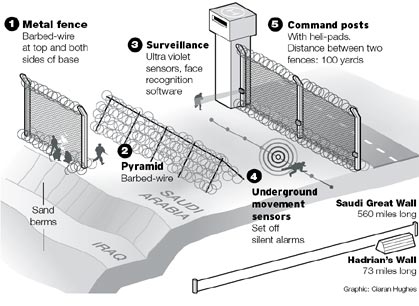 If your neighbor’s house is on “fire”, it needs “water”—not a “bucket of paint”. Yet we have been trying to “white-wash” non-linear situations that first need “fences” to accept the “paint” ever since we refused to cut-off the Ho Chi Minh infiltration trail with the McNamara line during the Vietnam war. DoD still doesn’t get it; saying “we don’t do mountains and we don’t do jungles” to try to justify incompetent troop flooding which isn’t going to cut it if the area is wide-open to enemy infiltration and exfiltration; its high time we start acting like winners and do OUR JOB–and solve the riddle of closed terrain infiltration using ALL the forms of military force, not just infantry gunslinging or fighter-bomber aircraft bombing. This all-arms, know-how is what we should offer our allies like the Afghanis, not incompetent gunslinger and fighter-bomber half-measures.

First, Leverage the Land, then Drain-the-Swamp of Rebels

The border between Afghanistan and Pakistan is 2,436 kilometers long. The entire border around Afghanistan is 5,529 kilometers long. This is NOT too much or too costly to secure by a sensor network and security fence backed by U.S. trained AFGHAN troops in M113 Gavin tracked—not wheeled, all-terrain, cross-country-mobile, light tank/personnel carriers ready-to-respond to any incursions as Quick Reaction Forces (QRFs) from fortified outposts all along the border trace. Our NATO allies, like the British, Dutch and Canadians, have suffered horrendous losses in wheeled trucks like the LAV-IIIs (we dub “Strykers”) and even though the latter are license-built in Canada, they have switched to tracked tanks that can traverse the landscape to avoid land mines by prudent unpredictable mobility.

M1064 variant Gavins with 120mm heavy mortars would offer instantaneous, 7 kilometer range, high-angle fires to reach out and drop high explosive bombs on any rebels trying to hide behind hills, rocks and steep terrains. I don’t want to give away the technotactical details of the sensors and weaponry that could be embedded into the fence for OPSEC reasons, but suffice it to say that most intruders would walk away rather than die trying to get through it.

Flying high overhead in this scenario are affordable, simple-to-operate-and-maintain, MANNED (not costly UAVs that constantly crash and see at best through a “soda straw”), fixed-wing, short take-off and landing (STOL) observation/attack (O/A) aircraft flown by AFGHAN pilots and observers to keep 24/7/365 air surveillance pressure and stay in radio contact with the border forts who have simple 105mm tube artillery to place immediate fires on anyone trying to get past the sensor security fence. In WW2, Korea and Vietnam the enemy feared our “grasshopper” spotter planes when they saw them because they could rain instant artillery death upon them; today’s planes would be “stealthy” using low-observability technologies so MANPADS SAMs wouldn’t work, even if the enemy knew the plane was overhead.

At the forts, the QRF troops live underground in, and are surrounded by, ISO shipping container “BATTLEBOXes” fortified with dirt to be protective barracks and walls while the inner perimeter has Raytheon RAID 107 -foot sensor towers and Aerostat observation balloons with infared and low-light television monitors to overlap surveillance with the border security fence’s sensors and the 24/7/365 air and ground patrols. The forts and BATTLEBOXes are self-sufficient by solar and wind power, so once fully skilled, the entire border security fence operation is turn-key from U.S. advisors to permanent Afghan ownership.

Estimates for this one-time cost to get Afghanistan on its feet with border security is about $774 million for just the AFPAK border to 1.76 billion to encircle all of Afghanistan—or 1/30th of the money we are throwing away now making the place less secure with our obnoxious and incompetent presence amongst a porous, open-ended mess.

Once the AFPAK (Afghanistan-Pakistan) border areas are denied to meddling militant Islamic outsiders and Taliban fascist rebels are limited to the areas within, the problem becomes a finite, linear one instead of an open-ended, non-linear free-for-all. Sweeps of areas inside Afghanistan will not be exercises in futility.  And, if Afghan internal security forces hold what’s cleared, the Taliban cannot infiltrate back and the game will be soon over. They will have to settle for a piece of tribal lands based on their ethnic affiliation and drop their IslamoFascism of trying to take over the entire country and force their brand of Islam down everyone’s throat (and over their heads with Burkhas).

If we are not willing to pay for a tangible security fence system because we don’t want to give the Afghans something enduring or it doesn’t tickle our blood lust and egos, then we have to question what we are giving–and why–if its not just a facade to indulge our own lusts to play “good guy” gunslinger to enrich ourselves with money and ego badges keeping the problem in play for as long as we can milk it. If this is the case, we would be better stewards our taxpayer’s monies by dropping the charade that we care when we clearly do not, and leave the Afghanis alone.

Editor’s Note: If your company has a security product (or multiple products) that you believe could be useful for any component of an advanced border security system (like the one described above), perimeter security system, or structural security system, please email us at defrev at gmail dot com, and we may mention, discuss, or even feature your product(s) in a future DefenseReview article.  Defense Review is always interested in learning more about the latest security technologies and hardware.

David Crane started publishing online in 2001. Since that time, governments, military organizations, Special Operators (i.e. professional trigger pullers), agencies, and civilian tactical shooters the world over have come to depend on Defense Review as the authoritative source of news and information on "the latest and greatest" in the field of military defense and tactical technology and hardware, including tactical firearms, ammunition, equipment, gear, and training.
Previous FailZero “AR-15 Basic Kit”: Tactical AR-15 Carbine Parts Upgrade Kit with EXO Technology Self-Lubricating Firearms Coating
Next Smith & Wesson M&P15R 5.45x39mm Tactical AR-15 Carbine: Have your AR-15 with a side of Russian.