First up is the TPL Mirage-1200 handheld electro-optical detector (optic detector), which is designed to detect long-range optical systems targeting you at ranges up to 1200 meters away. If someone’s scoping you with a rifle, you can detect them lurking out there in the proverbial ether quickly and efficiently, hopefully before they can take the shot. Or, if they’re just surveilling you with a video camera, still camera, binoculars, etc., you can detect them and go grab them up and hold them for questioning before they escape. In other words, you may not be able to see the bad guys before they see you, but you can see them very quickly after they see you.

sends out a defocused, eye-safe pulsed laser beam that bounces off all objects in its view. When it hits a layered or "stacked" optic/lens like a scope or other high-powered optic, it sends a real-time image back to user, highlighting the exact location of the shooter/sniper or observer as a bright spot on an otherwise monochromatic image of the scene. As TPL’s president/CEO, Dr. Leo Volfson points out, "an enemy operation is always preceded by optical reconnaissance." The Mirage-1200 will therefore hopefully allow a PSD team to detect the enemy during the enemy’s planning stages, before it gets to the terminal phase of the enemy op.

Editor’s Note: DefenseReview is aware of a COTS product out there that would seem to be a very simple, low-cost counter to TPL’s pulsed-laser sniper detection tech, but we won’t name it for purposes of OPSEC.

If 1200-meter detection is overkill for your detection/operational requirements, Torrey Pines Logic has a lesser-powered anti-sniper/surveillance system/detector called the Myth-350, which can detect threats out to 350 meters. Interestingly, TPL doesn’t have available info on the Myth 350 on their website. Fortunately, the Responder Knowledge Base does.

As it happens, Defense Review recently published an article involving a photo of a 5-man U.S. Secret Service Presidential Protective Division (PPD) Counter Assault Team (CAT) protecting President Elect Barack Obama in downtown Chicago, where we recommended some tactical items/accoutrements for their executive protection/PSD tool kit. If they’re not already using the Mirage 1200 and/or the Myth 350 optic/sniper detectors, they should definitely add them to our recommended items list. Let’s face it, VIP protection doesn’t get any bigger or more important than protecting POTUS.

Since the Mirage-1200 and Myth-350 are reportedly already in use with military (including U.S. Army Asymmetric Warfare Group (AWG), U.S. Naval Special Warfare (NAVSPECWAR), and the U.S. Marine Corps (USMC)) and law enforcement agencies, it would seem logical that the Secret Service would use either these specific systems or similar hardware while conducting their VIP protection operations.

While we’re on the subject of long-range optics detection, we should perhaps also mention the TPL Beam-1000, which is a vehicle-mounted or pole/building-mounted fixed-solution long-range optical systems detector that can automatically scan 360 degrees (automatic 360-degree scanning) and provide all-weather 24-hour surveillance. The Beam 1000 looks ideally suited any high-value-target perimeter security operation/mission, including base security, Embassy security, White House security, etc…

COTS – Commercial Off The Shelf

David Crane started publishing online in 2001. Since that time, governments, military organizations, Special Operators (i.e. professional trigger pullers), agencies, and civilian tactical shooters the world over have come to depend on Defense Review as the authoritative source of news and information on "the latest and greatest" in the field of military defense and tactical technology and hardware, including tactical firearms, ammunition, equipment, gear, and training.
Previous Anti-Terrorism Shmanti-Terrorism: The Inherent Counterterrorism Reality in Dealing with the Active-Shooter(s) Scenario
Next IDF Sniper Weapon System (SWS) .338 Lapua Magnum Bolt-Action Sniper Rifle 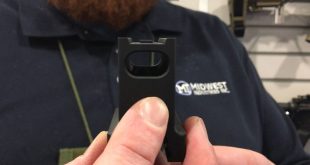