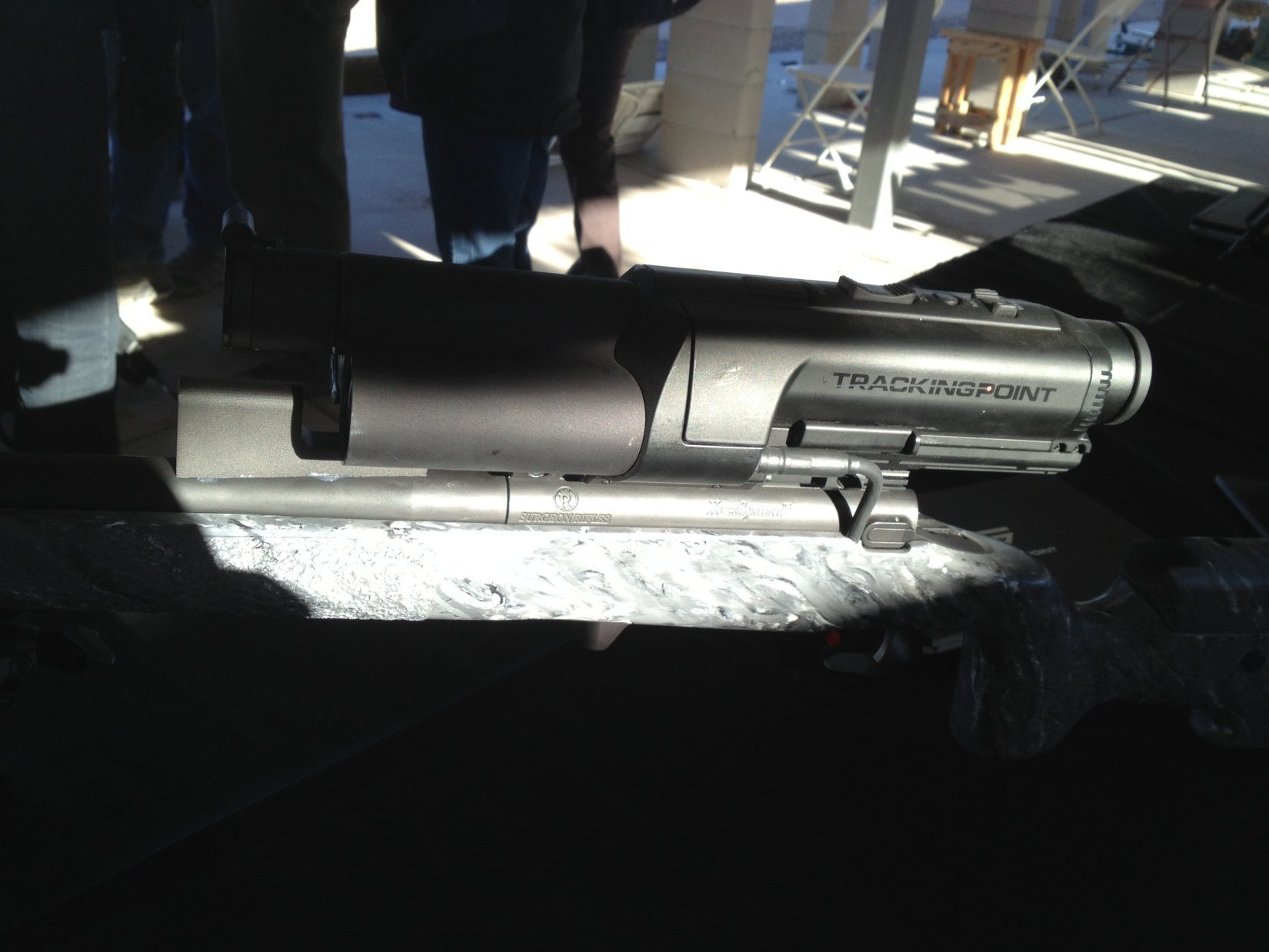 Gotta' love technology, especially when it comes to killing the enemy. We Americans are a healthy combination of hard work, inventiveness, and laziness. We work really hard to invent and make things that will do the as much hard work as possible for us and do it quicker than we ever could via traditional methods, thereby allowing us to be lazy and enjoy life more. This is the concept behind everything from the microwave oven to the atomic bomb. Both are great time (and labor) savers.

And, so is the TrackingPoint XactSystem Precision Guided Firearm (PGF) Package with Integrated Networked Tracking Scope. This little intgrated tactical rifle/smart scope wonder won the DR "hands-down most interesting" award at SHOT Show 2013 Media Day at the Range. It's very cool and would appear to represent the future of integrated anti-materiel/sniper rifle/integrated electronic tactical scope packages, assuming it works as reliably under adverse combat conditions, and is combat-durable.

With the TrackingPoint XactSystem PGF, Mil/LE snipers/long-range-interdiction specialists, civilian tactical shooters and hunters will be able to tag, track, target and engage the enemy, targets (paper and steel) and wild game respectively with ease and precision very quickly. When the shooter paints and locks onto the target with the red tagging button, the Xact System PGF marks the target (stabilized image), plots a firing solution (accounting for range, coriolis effect, magnus, spin drift, temperature, pressure and other envioronmental conditions) and adjusts the reticle position to hit the tagged target. The whole process is called "Tag Track Xact", and, utilizizing this system, TrackingPoint essentially takes the sniping out of sniping. Put another way, it's sniping made ridiculously easy–or sniping for dummies. Tag it, track it, kill it. 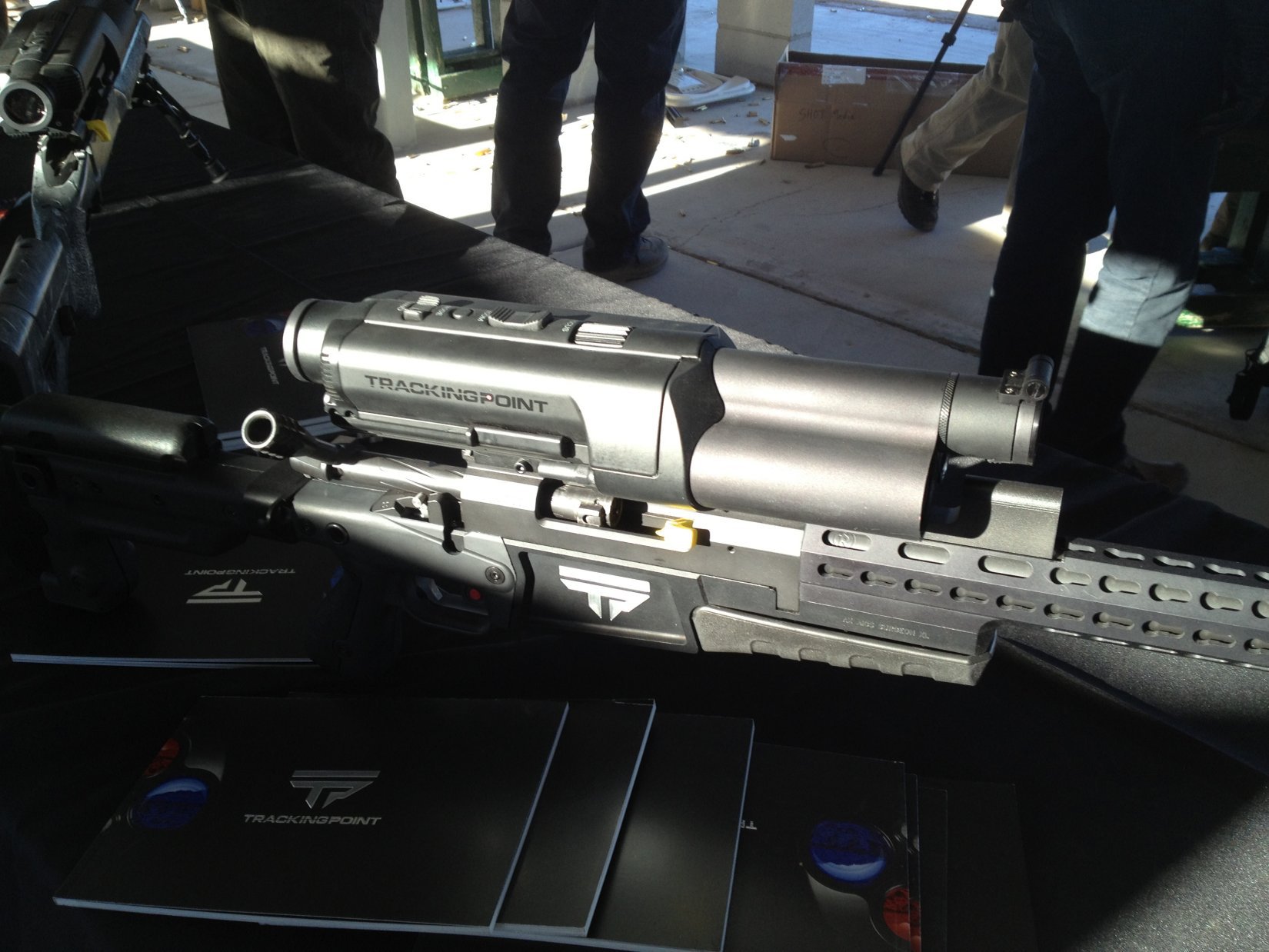 The shooter can then pull the Guided Trigger and keep it squeezed while aligning the lit-up red reticle with the red tag (red dot) on the target, or align first and then squeeze the trigger. However, if you do it the second way, the gun still won't fire until you're perfectly aligned, so you may still have to make minute adjustment until the gun fires . So, you might as well do it the first way. The integrated Networked Tracking Scope (NTS) aspect allows the shooter to "make first round hits at long range and share the experience with others via the onboard wifi server," via the ShotView App that streams the realtime video from the TrackingPoint Heads-Up Display (HUD) to smartphones and tablets. Or, you can use the TrackingPoint App to download and share the info with smartphones. The HUD puts all relevant and vital information right there in front of the shooter, just like a fighter pilot would have, so it's the visual heart of the system.

With TrackingPoint, the shot is actually being fired while the gun is still in motion. The XactSystem compensates for this with its predictive aspect. What if the target itself is moving? No problem. The system also enables the shooter to hit a target moving at up to 10-15 mph. Defense Review asked a TrackingPoint rep if the system can be developed to enable the shooter to hit targets moving at 50-60 mph, and he replied that it's indeed possible. 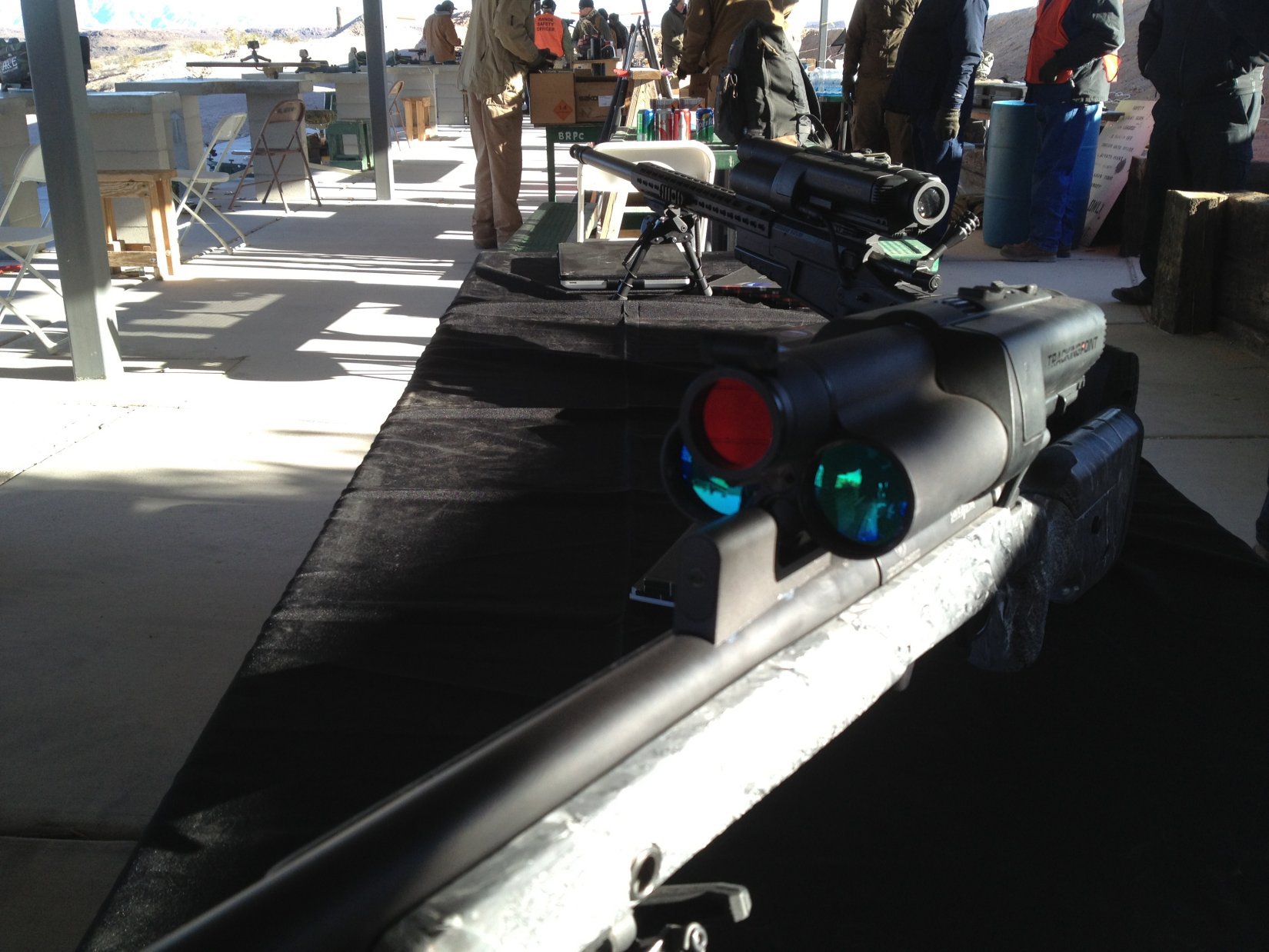 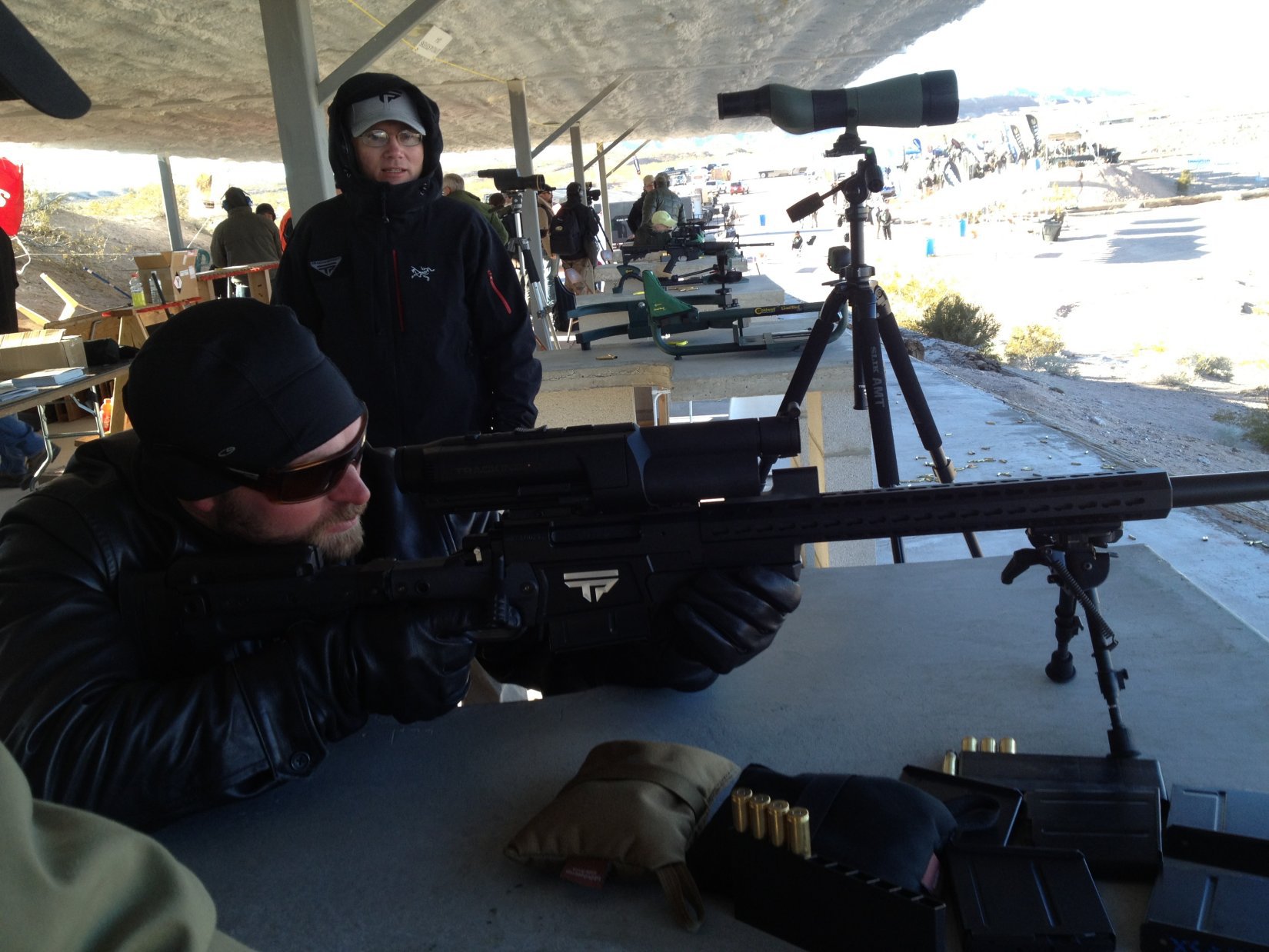 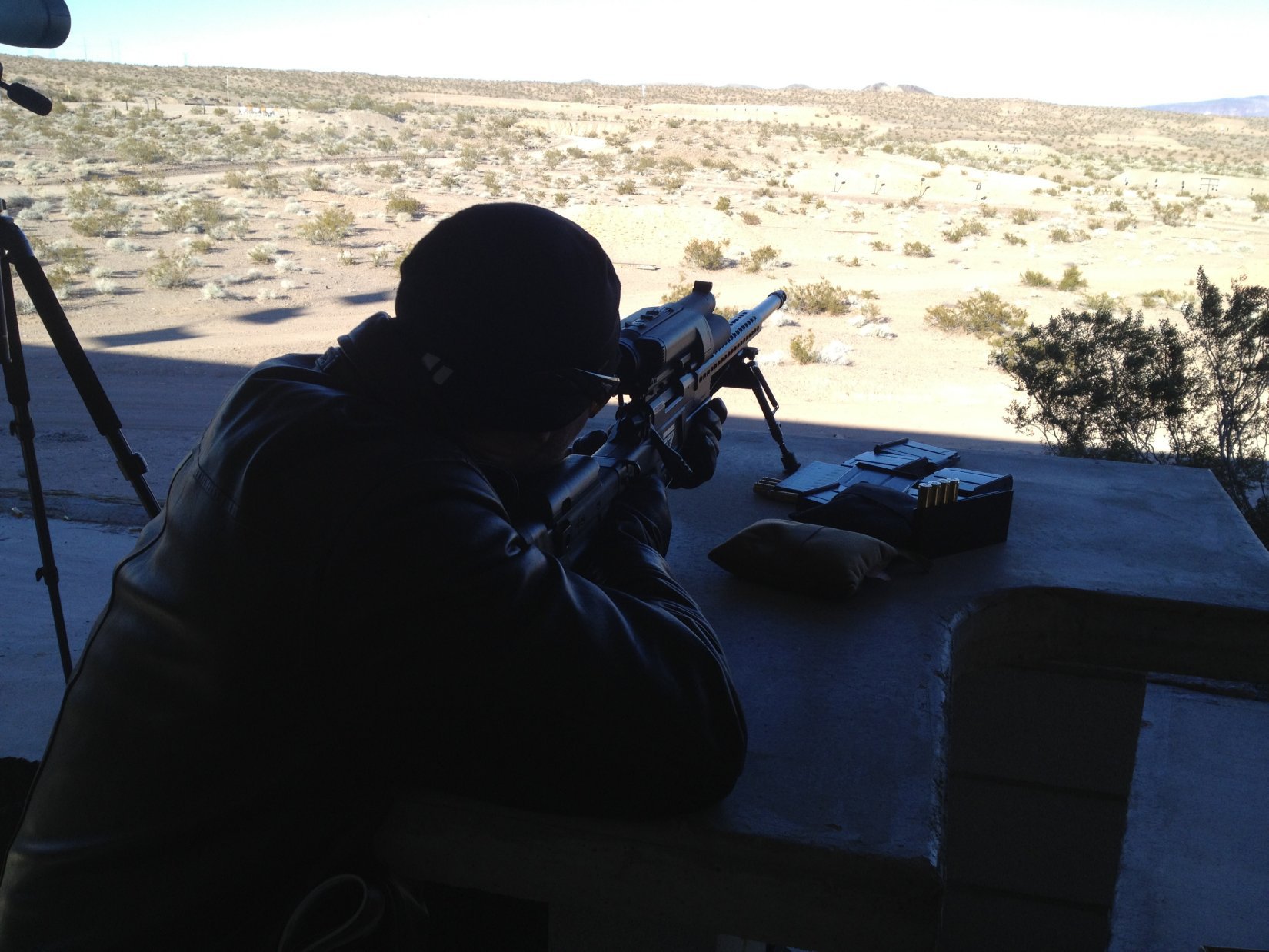