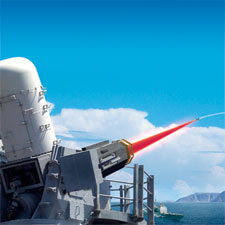 It would appear that a new martial technological dawn is officially upon us, specifically the era of laser warfare. The U.S. Navy just approved the use of the shipborne Laser Weapon System (LaWS) for use in the Persian Gulf (and presumably anywhere else its needed). DefenseReview (DR) has been reporting on the testing of laser weapon systems for the last few years, including LaWS, as we’ve been very interested in the hardware/technology, and its military combat capabilities.

According to the Navy, they’ve successfully tested LaWS high-aperture telescope against small boat swarms, right up until last month, in which a three-foot-high stack of shells was surgically destroyed right next to a simulated human being located inches away from the target. The LaWS’ surgical precision is crucial, due to the fact that the use of laser weapons against human targets is prohibited by the CCWC’s (Convention on Certain Conventional Weapons) Protocol IV restriction under the Geneva Conventions.

Anyway, radar is used to acquire the target, and the LaWS takes over from there, neutralizing it.

Now, if we can just get operational lasers on our aircraft, ground vehicles and warfighters. Don’t worry, they’re coming.

David Crane started publishing online in 2001. Since that time, governments, military organizations, Special Operators (i.e. professional trigger pullers), agencies, and civilian tactical shooters the world over have come to depend on Defense Review as the authoritative source of news and information on "the latest and greatest" in the field of military defense and tactical technology and hardware, including tactical firearms, ammunition, equipment, gear, and training.
Previous US Army Modular Handgun System (MHS) Program to Replace Beretta M9/92F Pistol: Glock 17 (G17) and Glock 19 (G19) Combat/Tactical Pistols Should Get the Nod
Next Operators Suppressor Systems/OSS Mission Muzzle Cans: Almost No Back Pressure Yields More Hits on Target and Longer Weapon Life