An Israeli company called Tadiran Spectralink Ltd. (Holon, Israel), a member of the Elisra Group, has just advanced the military combat application of telepresence a step further with their wrist-mounted Video Receiver And Monitor for Battlefield Operations, or V-RAMBO, for short. Tadiran Spectralink refers to the technology that V-Rambo utilizes as "Wrist-Displayed Vital UAV-Derived Intelligence".
Basically, V-Rambo, also known as the PVR (which we’re guessing stands for Personal Video Receiver) is just a miniaturized version of a system that’s been in use for several years on Israeli attack helicopters and tanks, called Tactical Video Link TVL-II, that was designed and developed to give helicopter gunships “dramatically swifter seeker-to-shooter cycles”, meaning the ability to locate and liquidate/neutralize (or "target kill") enemy targets/terrorists before these targets… 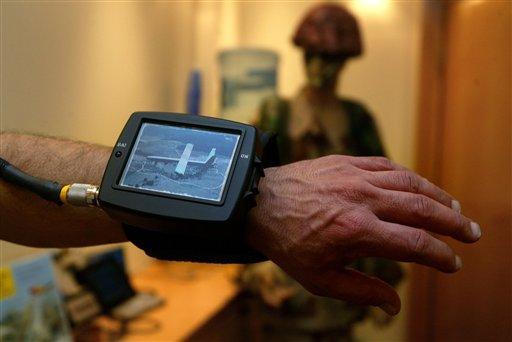 can exfiltrate the area (i.e. escape). Just like Tactical Video Link TVL-II does for tank and helicopter crews (and perhaps even fighter pilots), V-RAMBO broadcasts, or "beams", real-time video from unmanned aerial vehicles (UAVs), a.k.a. unmanned aerial reconnaissance drones, at the broadcast television-equivalent speed of 30 frames-per-second, only V-RAMBO does it directly to the wrists of individual Israeli Army infantry soldiers on the ground. The video display unit attaches to the soldier’s wrist via an adjustable velcro strap, and the video receiver unit can be mounted on the soldier’s vest or (we assume) on his waist (with the cable running through the vest. DefenseReview would like to see V-RAMBO made completely wireless/tetherless (encrypted/scrambled signal), with no cable running to the video display unit. This is how, in our opinion, it should be.

Itzhak Beni, CEO of Elisra Group’s Tadiran Electronic Systems and Tadiran Spectralink Ltd., has been quoted as saying that TVL-II "shortens tremendously" the amount of time it takes to identify and strike a target. "Before it was minutes, 10 to 12 minutes. Now it’s a matter of seconds," Beni said. Beni was also quoted saying "We are fulfilling the science fiction movies that we see." Pretty cool, and it really is a technology "Dick Tracy would be proud of", as referenced by Associated Press (AP) writer Josef Federman in his article "‘Wrist Video’ Gives Israeli Army an Edge".
According to reports, the Video Receiver And Monitor for Battlefield Operations (V-RAMBO) system’s color LCD screen/video monitor is about 3 inches wide, compared with TVL-II’s 5-inch screen. DefenseReview reader and member "Stormhawk" commented on DefRev’s recent article on the Foster-Miller Armed/Weaponized Talon Robot/Special Weapons Observation Reconnaissance Detection System (SWORDS), titled "Robo-Soldier Ready for Combat Deployment to Iraq for Urban Warfare/CI Ops", that "combining this system [SWORDS] with the Israeli drone/vid/control system declassed earlier this week would make it a most formidable addition our forward deployed assets." We believe that “Stormhawk” is referring to V-RAMBO. If V-RAMBO is what he’s referring to, DefenseReview must agree. V-RAMBO could also be applied by U.S. Army and U.S. Marine Corps (USMC) infantry forces to iRobot PackBot robots and Dragon Runner, a reconnaissance robot (or recon bot) that was co-developed by the Carnegie Mellon Robotics Institute (Hagen Schempf is the principle scientist on the project) and the U.S. Marine Corps Warfighting Laboratory (MCWL) for Project Reconnaissance, Surveillance, and Target Acquisition (Project RSTA).
It would also be interesting to see the V-RAMBO tech applied to UCAVs (Unmanned Combat Air Vehicles) and UCAR (Unmanned Combat Armed Rotorcraft), so U.S. Army infantry soldiers and U.S. Marine Corps infantry can control air strikes directly, in real time, without having to go through a pilot. Perhaps that’s where infantry combat is headed. Unfortunately, however, DARPA’s UCAR program was recently cancelled for lack of funds (or re-prioritizing of available funding). Hopefully, it, or something like it, will be resurrected at some point. At the moment, V-RAMBO is in very limited use on only a handful of Israeli army infantry soldiers’ wrists. DefRev has a feeling that’s going to change very soon, and wouldn’t be surprised if V-RAMBO, or a technology like it, started making its way over to U.S. infantry forces in the not-too-distant future. If that happens, DefenseReview would like to see the V-Rambo tech refined a little bit more, i.e. flattened/streamlined and transferred from the wrist to along the forearm, a la "Predator".  It also must be made wireless/untethered.

David Crane started publishing online in 2001. Since that time, governments, military organizations, Special Operators (i.e. professional trigger pullers), agencies, and civilian tactical shooters the world over have come to depend on Defense Review as the authoritative source of news and information on "the latest and greatest" in the field of military defense and tactical technology and hardware, including tactical firearms, ammunition, equipment, gear, and training.
Previous Robo-Soldier Ready for Combat Deployment to Iraq for Urban Warfare/CI Ops
Next Notice: Objective Individual Combat Weapon (OICW) Increment I Family of Weapons