The following article contains a link to the DREAD Weapon System Video. This is the first time this video has ever been shown to the public. The DREAD depicted in the video is a functional prototype that operates on a less-than-lethal mode. This prototype was dismantled for security purposes to protect the technology, after the making of this video. As of this posting, DefenseReview (DefRev) is the ONLY publication in the WORLD that has any written materials or video footage, or any information whatsoever, for that matter, on this revolutionary new weapon system. 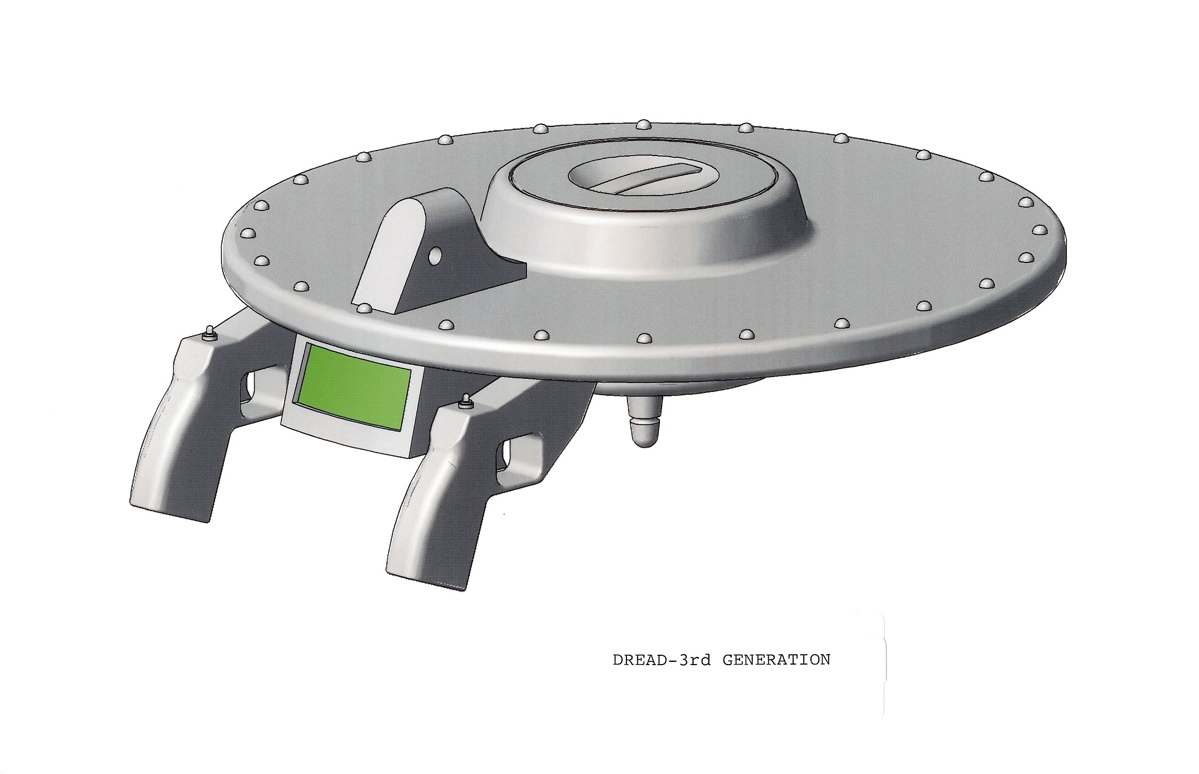 There’s more. Since the DREAD/MPDS (Multiple Projectile Delivery System) is a centrifuge weapon, projectile velocity can be adjusted instantly back and forth between lethal and less-lethal/non-lethal modes. This means it can be utilized just as effectively for embassy security and peacekeeping roles. As an embassy security weapon, the less-lethal/non lethal mode would most likely be the way to go, in most cases. Less-lethal is usually adequate for any crowd control or riot control situations. However, let’s say the crowd starts storming the gates, and now presents a lethal threat to the occupants inside. Well, just pull your Marines inside, switch your remotely-operated battery of DREAD’s on over to lethal mode, and make survival above ground impossible for anyone outside the embassy. No one gets in. Same thing goes for military base security. Remote DREAD Centrifuge Gun Pods can be outfitted with heat and motion sensors, and left in unmanned areas. These remote pods can be either human-operated, or pre-programmed with both less-lethal/non-lethal and lethal protocols that will function automatically and not even require human operation. Mobile robotic platforms, including remote-controlled Unmanned Ground Combat Vehicles (UGCV’s), could also be outfitted with DREAD systems. And, the list goes on. The technology application possibilities/potential uses are virtually endless.
So, what’s the upshot? It’s DefenseReview’s opinion that, if the DREAD Weapon System works as advertised, it will have a profound impact on U.S. infantry warfare capabilities. It has the potential to literally change the way we fight on the ground, and perhaps even in the air. No question, it will revolutionize both ground and air vehicular armament and firepower capabilities. The DREAD will have a similarly profound impact on U.S. embassy security and military base perimeter security capabilities. This paradigm shift in firepower isn’t limited to the ground and air, either. The DREAD’s complete lack of recoil will allow it to be fired from space-based platforms, i.e. satellites, without knocking them off of their respective orbital paths. Zero recoil, plus 8,000 fps projectile speeds, 5,000-120,000 rpm capability, and huge on-board ammunition supplies, equals a viable and relatively inexpensive option for satellite defense (and enemy-satellite neutralization), and possibly even a fast-realizable armament solution/alternative for a U.S. Space-based defense network.
Look out, DREAD’s comin’.
Charles St. George, inventor of the DREAD/MPDS (Multiple Projectile Delivery System) Centrifuge Weapon (Centrifuge Gun), can be contacted via email at [email protected].
DREAD Video Download Intstructions:
Right-Click Here, then click on “Save Target As…” to download and view the DREAD Weapon System promotional video. The DREAD video is 18MB long, and is in QuickTime format. If you don’t currently have the QuickTime player on your system, you can download it here.
DREAD Brochure (Front)
DREAD Brochure (Back)
Click here to read about the DREAD Weapon System’s advantages over conventional small arms.
The links below will take you to the specific pages of the DREAD Technology White Paper:
Page 1
Page 2
Page 3
Click here to view a color concept drawing of the 3rd Generation DREAD.
Click here to view a color drawing of the DREAD’s Ball Ammo.
Inventor’s Background
Charles St. George has been working in the small arms field for quite some time, now. He started Leader Dynamics, a small arms design and development firm, in Australia in 1978. This is where he designed and developed the Leader assault rifle. St. George left Leader Dynamics in 1981. In 1982, he formed Armtech (also in Australia). At Armtech, Charles and his team, four men total, including him, created the M18 Assault Rifle, which was subject of a tender. St. George and his team were able to put a technical data package (TDP) together for the M18 and produce a complete, fully interchangeable weapons family, i.e. a light machine gun, assault rifle, and submachine gun, plus 350 production drawings, in 90 days to satisfy the Australian government’s 1986 Small Arms Replacement Program’s Request for Tender (RFT). Keep in mind that the technical data package had to conform to D14 NATO trial requirements.
During those 90 days, St. George’s team also produced the video and brochures for the M18 weapons family. When they issued the Request for Tender (RFT), the Australian government didn’t think that anyone in Australia would actually be able to submit a candidate weapon, especially not within the time deadline. Private companies ended up sponsoring the Armtech team, because the Australian government had said it would give preference to an Australian submission. Ultimately, this wasn’t true. The Australian government, instead, gave preference to the Steyr AUG. They told the Armtech team that the M18 wasn’t “combat proven”. Keep in mind this was during peacetime.
The assault rifle version of the M18 later became the ART 30 bullpup rifle. The Bushmaster M17S is based on the ART 30 bullpup assault rifle. However, Bushmaster made some design changes to the rifle, so the M17S is significantly different from the Armtech ART 30, especially in the area of combat performance.
So, how does a guy go from designing/developing conventional small arms to creating a centrifuge weapon? Well, for a couple of years, before he even entered the infantry small arms field, St. George worked at Sharples Centrifuges (1964-1966). St. George simply combined his centrifuge knowledge with his knowledge of infantry small arms to create the DREAD.
It should also be mentioned that Mr. St. George was the Engineering Manager at Barrett Firearms Manufacturing, Inc. from July 2002 to April 2003.
If you enjoyed this article/story, we would ask that you please sign up as a member of Defense Review (DefenseReview.com). Thank you.
Click here to become a DefenseReview.com member.

David Crane started publishing online in 2001. Since that time, governments, military organizations, Special Operators (i.e. professional trigger pullers), agencies, and civilian tactical shooters the world over have come to depend on Defense Review as the authoritative source of news and information on "the latest and greatest" in the field of military defense and tactical technology and hardware, including tactical firearms, ammunition, equipment, gear, and training.
Previous Wilson Combat UT-15 Urban Tactical Rifle/Carbine: Fast and Light
Next U.S. Army Develops Lightweight, Flexible Solar Panels to Power Troops.