On April 27th (2005), Alliant Techsystems, Inc. (ATK) issued a press release on their semi-auto XM25 25mm "advanced airbursting" MGL (multiple grenade launcher) through PR Newswire. ATK calls it the XM25 "Air-Burst Assault Weapon". DefenseReview has known about the XM25 development program for awhile, now, but we never quite got around to writing about it. So the reader is aware, we’ll be reporting on the XM25 in more detail in a future article. In the meantime, however, we’re going to do a little light coverage on the XM25 in this one:
The XM25 is an offshoot of the U.S. Army/JSSAP/Picatinny Arsenal, NJ XM29/OICW. It’s no secret that we here at DefRev weren’t big fans of this system. The XM29/OICW (Objective Individual Combat Weapon) combined a semi-auto 20mm grenade multiple grenade launcher (MGL)–utilizing high-explosive timed-fuse air-burst grenades–with an underbarrel-mounted 5.56x45mm "kinetic energy weapon" component (a short-barrelled/modified HK G36-type system). There were a lot of problems with that system, including…

excessive size, excessive weight (they couldn’t get it below approx. 18 lbs), less-than-optimal ergonomics, excessive cost per unit, lack of lethality of the 20mm timed-fuse air-burst grenades, lack of effectiveness (with respect to range) of the underbarrel-mounted assault rifle/subcarbine (due to the abbreviated/shortened barrel), and awkward configuration (5.56mm rifle/carbine situated underneath the 20mm grenade launcher). There were even reported problems with the timed-fuse 20mm grenade system. The rumor was that the timing system wasn’t acceptably reliable (unconfirmed/unverified).

With the XM25, ATK has increased the size of the grenades from 20mm to 25mm for increased lethality and (wisely) separated the grenade launcher element from the 5.56 subcarbine element, creating a stand-alone semi-auto 25mm multiple grenade launcher (MGL) that just might have solved all of the problems that plagued the XM29/OICW. When I first saw the behemoth that was the OICW, a number of years ago, I immediately disliked it. One of the first thoughts I had upon viewing it was that the 20mm grenade launcher should be a separate weapon. With the XM25, ATK has done just that–AND simultaneously increased target lethality with the bump-up to 25mm. It’s also possible that they’ve perfected the target acquisition/fire control/timed-fuse air-bursting system, so the system is now combat-reliable. We’ll have to see. 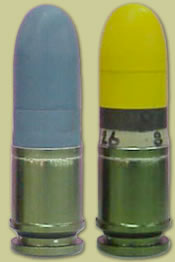 Basically, the ATK XM25 looks viable, provided that the improved-lethality 25mm grenades actually prove lethal enough on the battlefield, the targeting system (a.k.a. "target acquisition/fire control system") and timed-fuse air-burst system are acccurate and reliable, the weapon proves reliable (no stoppages or jams) and robust/rugged under combat conditions, and OA weapon weight is manageable for the end-user. If so, the XM25 could fly. Defense Review will investigate, and report back to our readers.
Here’s what ATK (Alliant Techsystems, Inc.) has to say about the XM25 Air-Burst Assault Weapon, on their website:
"The XM25 air-burst assault weapon is a next-generation, semi-automatic weapon system designed for effectiveness against enemies protected by walls, dug into foxholes, or hidden in hard-to-reach places.
The XM25 provides the soldier with a 300 to 500% increase in hit probability to defeat point, area, and defilade targets out to 500 meters. The weapon features revolutionary high-explosive, air-burst ammunition programmed by the weapon’s target acquisition/fire control system.
The XM25 integrates ballistics computation in the full-solution Target Acquisition/Fire Control (TA/FC) system. The soldier places the aim point on target and activates the laser rangefinder. The fire control system provides an adjusted aim point. The soldier places the adjusted aim point on target and pulls the trigger. Target information is communicated to the chambered 25mm round. As the round speeds down range, it measures the distance traveled and bursts precisely at the distance preprogrammed.
The XM25 precisely delivers air-bursting munitions in all conditions, including MOUT and complex terrain. It is five times more lethal at the M203 maximum range and continues to provide lethality well beyond the M203’s maximum ability. The system is designed for optimum performance at 300 meters but will perform to 500 meters and beyond.
It includes five different types of ammunition:
– Thermobaric
– Flechette
– Training
– High Explosive Air Bursting
– Non-Lethal"
Now, here’s the press release that ATK issued on April 27th, 2005 on PR Newswire:
"ATK Delivers First XM25 Prototypes to U.S. Army for Testing and Evaluation
Wednesday April 27, 8:33 am ET
ATK’S Advanced Airburst Weapon System Brings Precision Targeting, Enhanced Lethality to the Warfighter
MINNEAPOLIS, April 27 /PRNewswire-FirstCall/ — Alliant Techsystems (NYSE: ATK – News) has delivered the first six prototype XM25 advanced airbursting weapon systems to the U.S. Army for field-testing. The XM25 fires a High Explosive (HE), air bursting 25mm round capable of defeating an enemy behind a wall, inside a building or in a foxhole. The advanced design allows the operator to program the round so that it flies to the target and detonates at a precise point in the air. It does not require impact to detonate. The XM25 is ideal for urban combat. It puts precision firepower in the hands of the soldier, allowing them to eliminate threats without causing significant collateral damage. "The initial field tests are very promising," said LTC Matthew Clarke, U.S. Army project manager, individual weapons. "A weapon system like the XM25 will prove invaluable to our warfighters. It will be a clear differentiator on the battlefield."
The revolutionary fire control system for the XM25 employs an advanced laser rangefinder that transmits information to the chambered 25mm round. As the round flies downrange to the target, it precisely measures the distance traveled and detonates at exactly the right moment to deliver maximum effectiveness. The XM25 increases the warfighter’s probability of hit-to-kill performance by up to 500 percent over existing weapons. It also extends the effective range of the soldier’s individual weapon to more than 500 meters.
ATK is a $2.4 billion advanced weapon and space systems company employing approximately 14,000 people in 23 states. News and information can be found on the Internet at http://www.atk.com.
Certain information discussed in this press release constitutes forward- looking statements as defined in the Private Securities Litigation Reform Act of 1995. Although ATK believes that the expectations reflected in such forward-looking statements are based on reasonable assumptions, it can give no assurance that its expectations will be achieved. Forward-looking information is subject to certain risks, trends and uncertainties that could cause actual results to differ materially from those projected. Among those factors are: the challenges of developing advanced weapon systems, changes in governmental spending and budgetary policies, economic conditions, equity market returns, the company’s competitive environment, the timing of awards and contracts, and program performance. ATK undertakes no obligation to update any forward- looking statements. For further information on factors that could impact ATK, and the statements contained herein, reference should be made to ATK’s filings with the Securities and Exchange Commission, including quarterly reports on Form 10-Q, current reports on Form 8-K and annual reports on Form 10-K."
Media Contact:
Bryce Hallowell
Phone: 952-351-3087
Email: [email protected].
Investor Contact:
Steve Wold
Phone: 952-351-3056
[email protected]
For general information, contact Alliant Techsystems, Inc. (ATK) by phone at 952-351-3000, or via email at [email protected].
Click here to read ATK’s original press release (reprinted above) on the XM25 at PRNewswire.com.
Click here to read the same press release at Yahoo! Finance.
Addendum (5/08/05): DefRev just discovered some additional info on the ATK XM25 "smart grenade launcher" at Murdoc Online. Click here to read it.
Click here to read Murdoc Online’s update on the XM25, published on April 27th, 2005 (the date of ATK’s press release).

David Crane started publishing online in 2001. Since that time, governments, military organizations, Special Operators (i.e. professional trigger pullers), agencies, and civilian tactical shooters the world over have come to depend on Defense Review as the authoritative source of news and information on "the latest and greatest" in the field of military defense and tactical technology and hardware, including tactical firearms, ammunition, equipment, gear, and training.
Previous Royal Canadian Mounted Police Team to Compete in 2005 5.11 Challenge
Next MaxSight Lenses: Better Combat Vison for Tactical Operators?