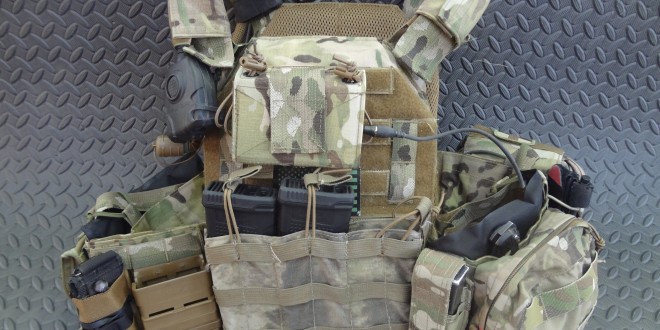 When it comes to tactical gear, usually the biggest challenge most shooters face is selecting which manufacturer has the right piece of kit with the best features at the best price. Take magazine pouches, for example. You can find everything from double magazine pouches, to triple shingles, to dual rifle/pistol magazine combos, made in both nylon and kydex.

But what about specialty items that are not needed as a general item for most shooters? When this is the case, many times, if the piece of equipment you have is brand new or so specialized that only a very limited number of people would need a pouch for it, trying to find a proper pouch for that item can be very difficult, and sometimes nothing even exists for it. Up until very recently, this has been the case with a piece of equipment I carry called a KDU. I say recently because ATS Tactical Gear is now offering a pouch specifically designed to carry your KDU on your plate carrier/ body armor. Editor’s Note: The plate carrier/tactical vest in the featured image above this article, and in some of the embedded photos within it (below), is an ATS Aegis Plate Carrier.

First off, what is a KDU, you ask? KDU stands for Keypad Display Unit. It’s basically a remote key pad for Harris tactical radios [or, “combat radios”]. What makes having a KDU handy for your tactical radio is that using one allows you to mount your radio anywhere on your body armor and still be able to control the radio as if you were using the built-in controls on the radio itself. Using myself as an example, I prefer to wear my radio on the back of my kit, allowing for more free space on the front for other items like magazine pouches or other stuff I might need while in the middle of a firefight.

Wearing my radio on my back would not be possible if I did not have a KDU remote because I would not be able to change frequencies if necessary. That’s why you see a lot of soldiers wearing their radios on the front of their kit (usually on their non-firing side.) It’s a necessity to be able to have access to your radio’s controls. You don’t want to be that guy, that while you’re in the middle of an operation, you ask your buddy to turn up your volume or change frequencies for you because you cannot reach your own radio. 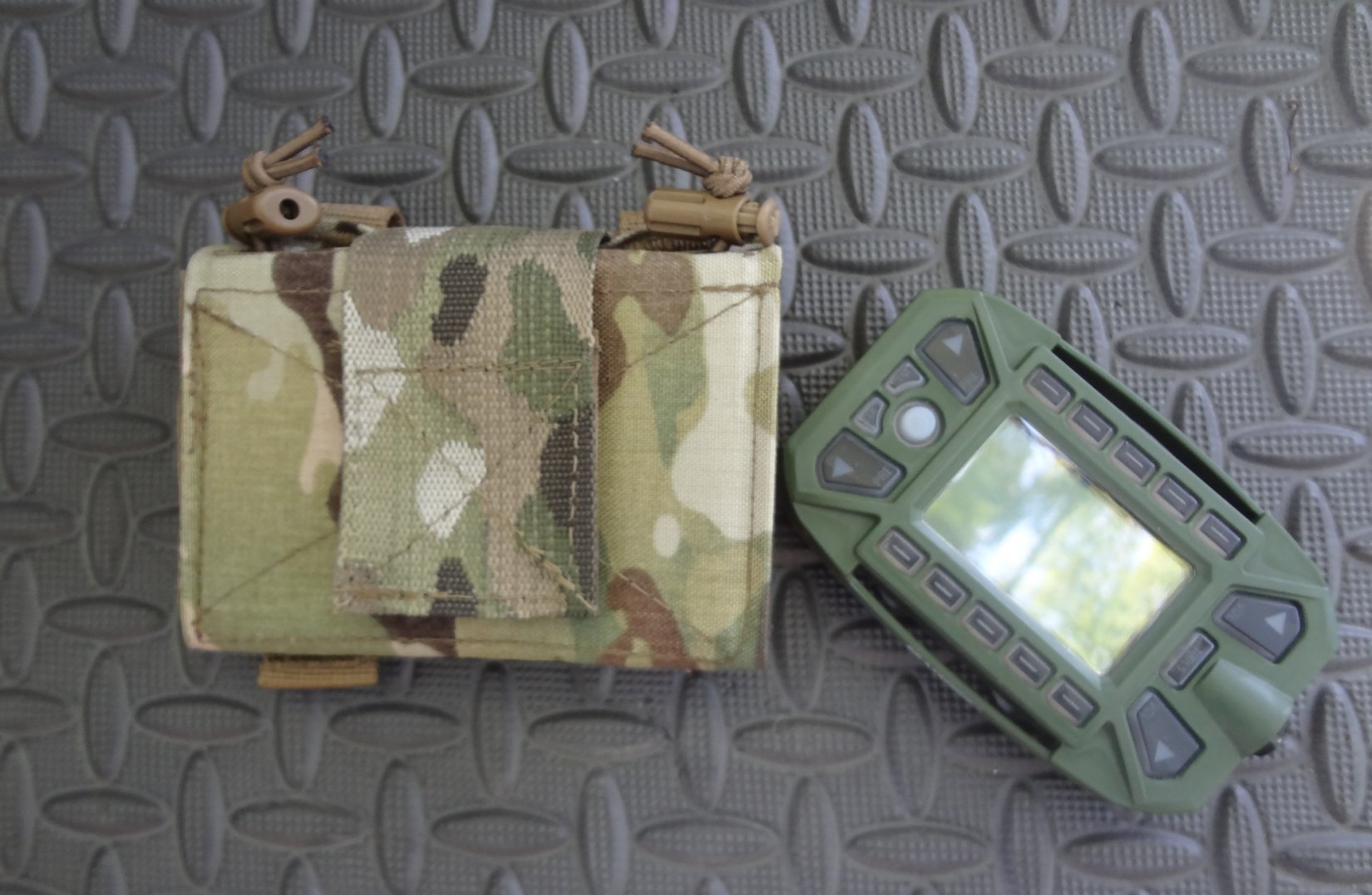 The ATS KDU Pouch itself is a pretty slick design, in my opinion. Just slightly larger than the KDU itself, it’s basically a like flip-down map pouch, but instead of a clear map pocket, it has a flap with Velcro on the inside to attach your KDU. This fold out design allows you access to the KDU when you need it, and when you don’t. It folds up, and is secured via a 2-inch nylon strap that Velcro’s across the front of the pouch. This flip-down design also helps protect the rather fragile screen on the KDU. When it’s folded up, it places the screen side of your KDU against your body armor.

Having broken two KDU’s from cracked screens in the last year (one in training, the other while on a deployment), being able to protect the face of the KDU is important because it stores the KDU screen against your plate carrier. This will help protect the screen. And, because the screen is recessed in the body of the KDU itself, there’s little chance of you damaging it from sitting against your plate. Both times that I’ve cracked the screen on my KDU, it was from sitting in a pouch and having other items bang against it. 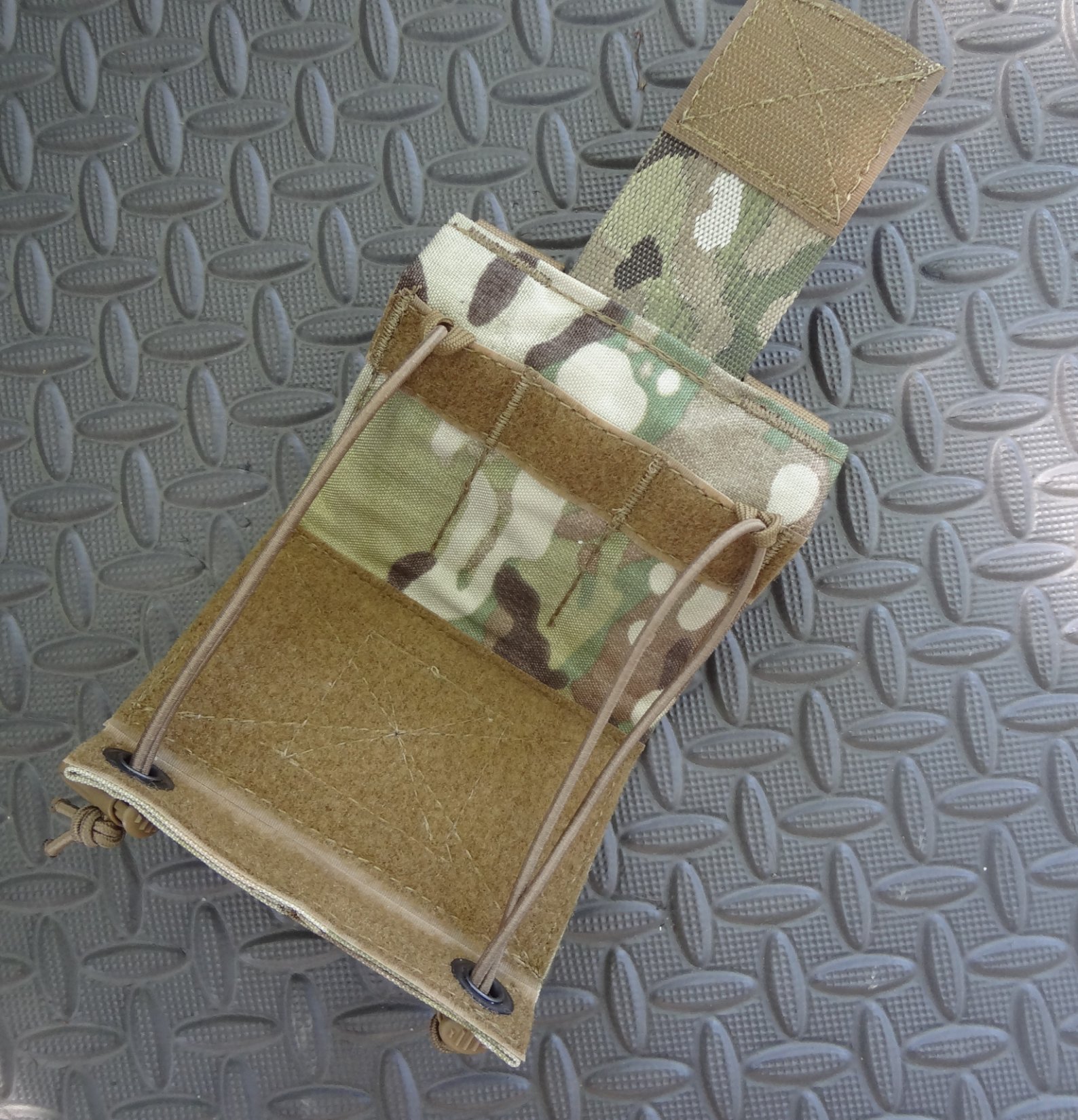 Inside of pouch. Note bungee cord on both sides of the pouch, allowing you to fold down the flap as much as you want. 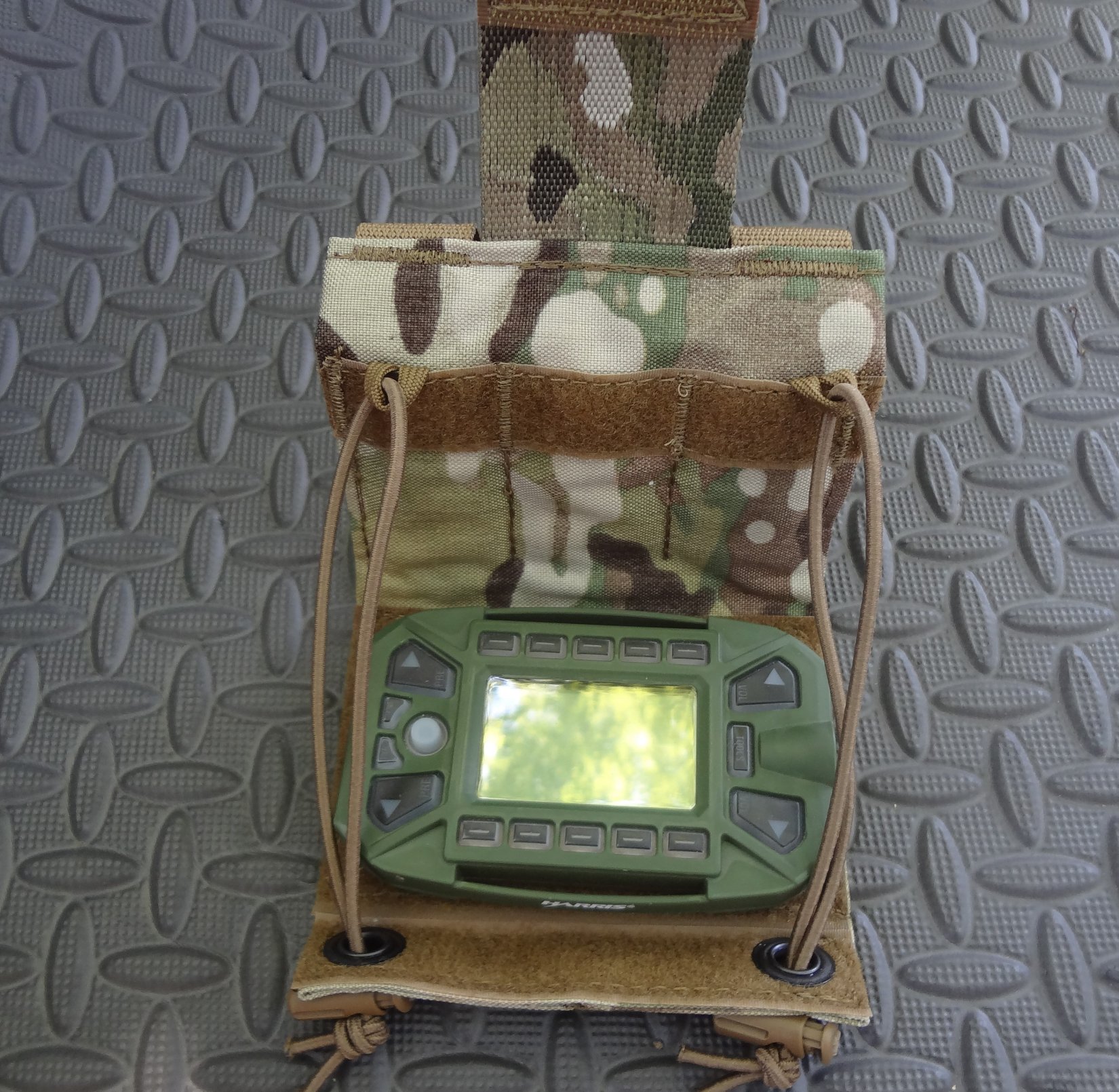 To attach the KDU into the pouch, you will need to put some hook-side Velcro tape on the back of the KDU. Then, it’s just a matter of attaching the KDU to the Velcro panel. 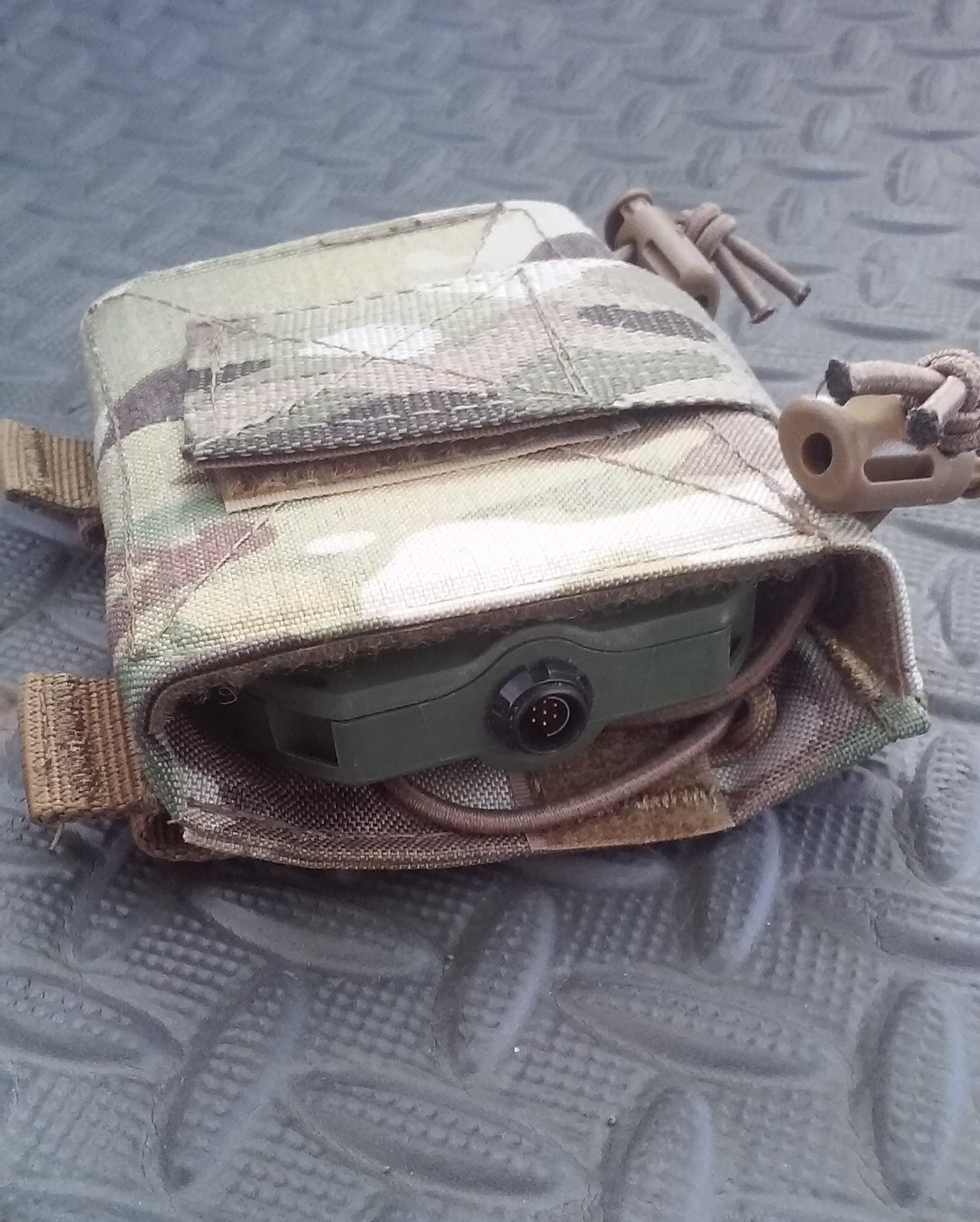 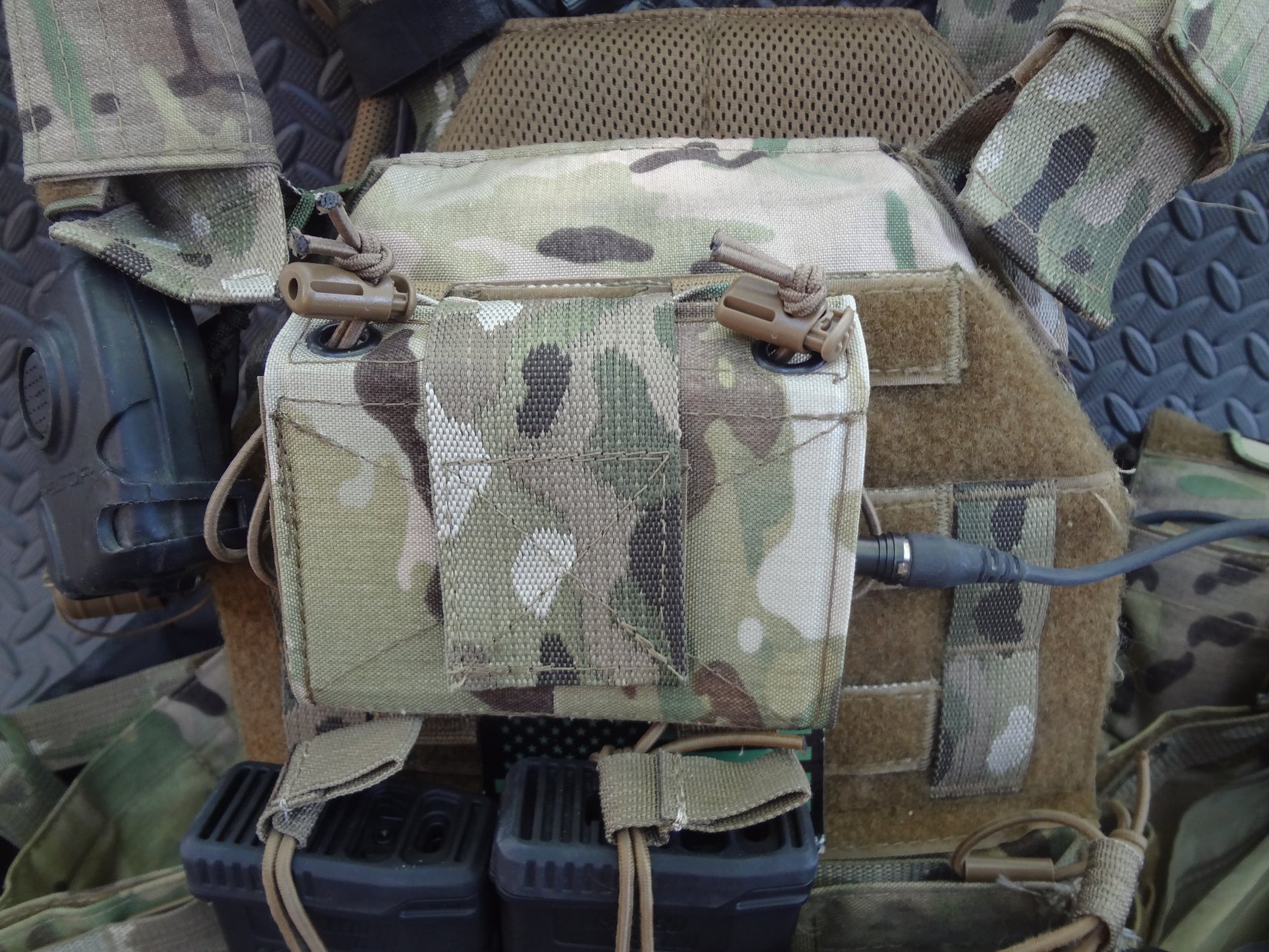 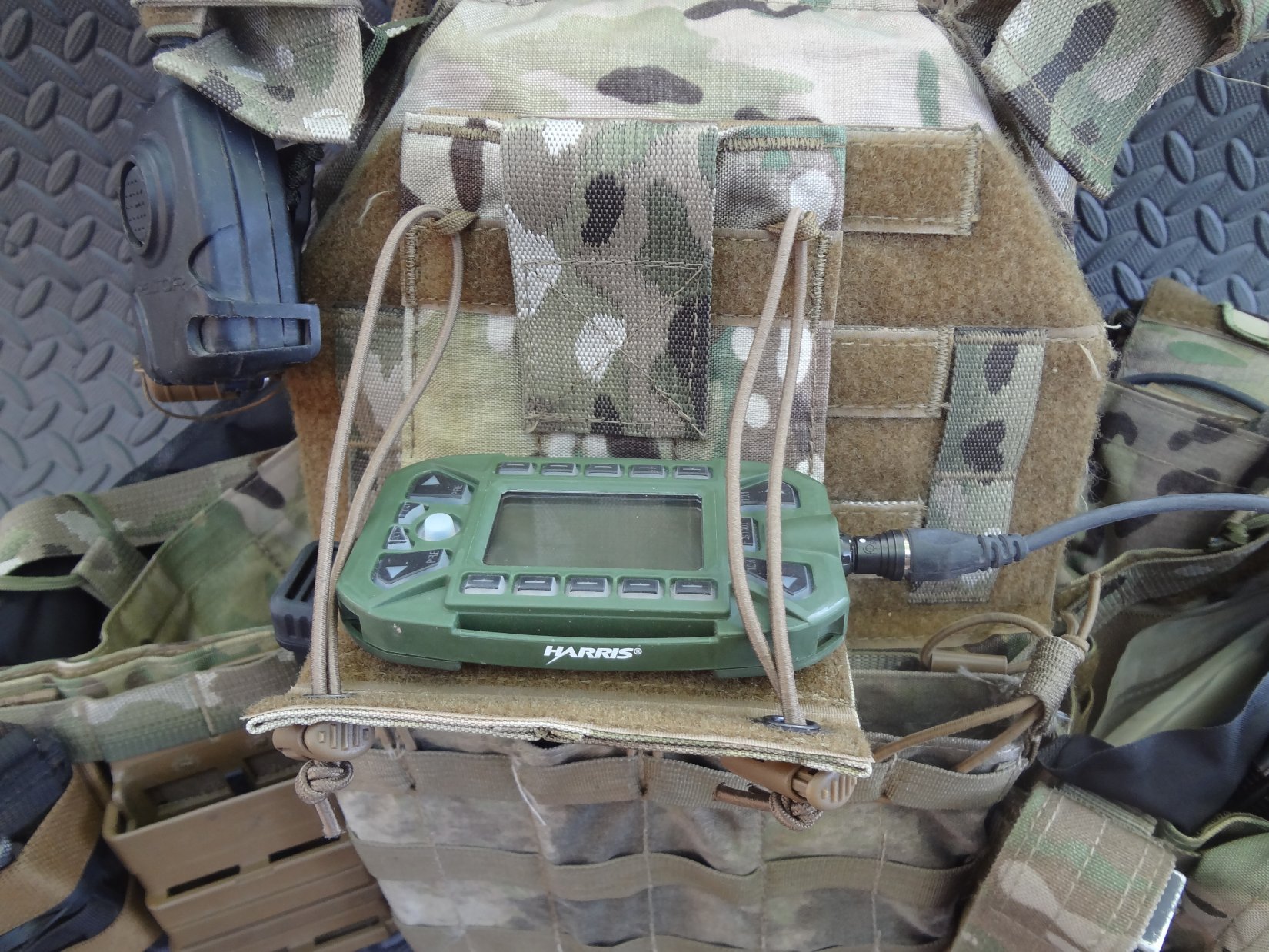 Why You Need One

The way I normally stored my KDU was either to tuck it into an admin pouch on the front of my carrier, or stick it away into a side plate pocket. In both instances, when needing to operate it, this usually meant having to dig around and feel for it in the pouch. Then, once done, I’d jam it back into a pouch so I could be hands-free again. And, if I had to constantly change frequencies, I would just stick it to the front of my plate carrier via some Velcro tape on the back.

While this method does work, I did not find it optimal. When needing the KDU again, I had to dig it out of a pouch (this is how I cracked two screens) and having it sit exposed on the front of my kit. While this is very handy, it does expose it to the elements, and there is always the danger of breaking it if you have to do some aggressive bounding or jump down behind cover, etc. Plus, wearing it exposed or on your wrist (The KDU comes with a wrist strap.), you have to watch your light discipline at night.

The keys and the screen of KDU light up when in use, so you can see what you’re doing. Even though you can adjust the brightness and the duration, unless you take the time to manually shut it off before sticking it on your kit, there is usually always a second or two when you are walking around with a lit-up KDU screen on the front of your kit (Not great if you are trying to move around unseen by your foe.).

Now, with ATS Tactical Gear’s KDU Pouch, it’s just a matter of undoing a Velcro strap and folding the front of the pouch down get access to your KDU. When you’re done, just fold it up, and it’s out of the way. Plus, when operating at night, the fold-up design helps with light discipline. Instead of using valuable time to to turn off the light or waiting for the screen light time-out to kick in, just fold it back up, thereby placing the lit up screen against your kit and not projecting out for everyone to see. 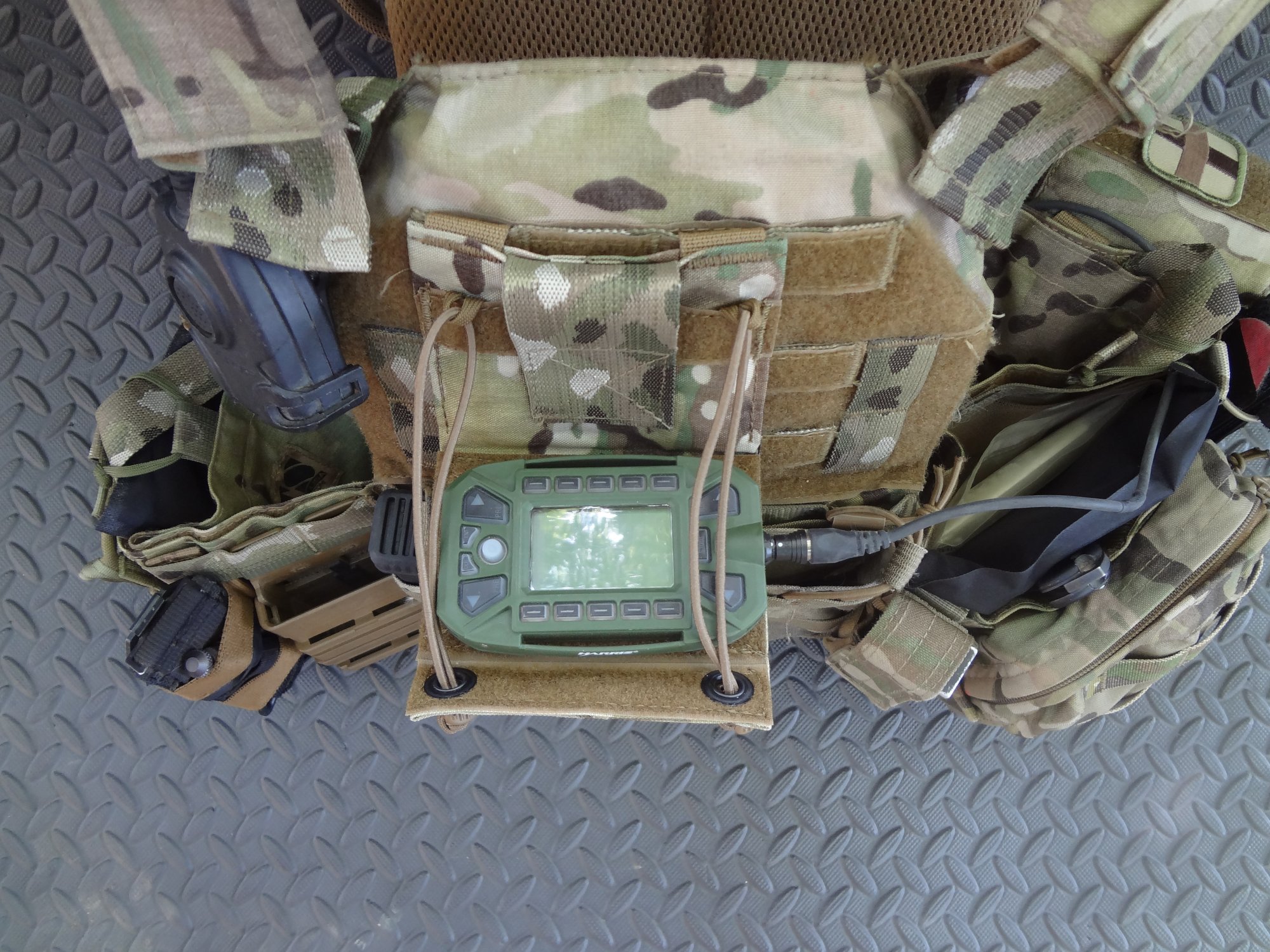 KDU in the ATS KDU pouch from wearer’s point of view. The flip-down design puts the face of the KDU right where you need it. Also, because it’s just Velcro’ed in place, you still have the option of taking it out of the pouch to use it.

Looking for ammunition pouches or a minimalist style plate carrier? Just about every manufacturer of tactical gear will offer their versions of these items. They are universally needed, regardless of whether it’s Law Enforcement, the military or for personal protection. Everyone needs a way to carry spare ammunition and a method to wear body armor. So, I understand why there are some items for which you just cannot find pouches or accessories. To stay in business, one has to make a profit. So, making a pouch for an item that is unique to a small group of users may not make good business sense.

So, when a company does go out of their way to offer a gear solution to a highly specialized piece of kit, I think it stands out, as is the case with ATS Tactical Gear’s KDU Pouch. Unless you’re in the military or some sort of tactical police unit that uses Harris radios (and that are capable of interfacing with a remote KDU to begin with), then, most likely, you will never have a need for this pouch. But for those of you that do, the search is over. I think you will find that this is the pouch you’ve been looking for.

The ATS Tactical Gear KDU Pouch is the perfect pouch for your KDU! 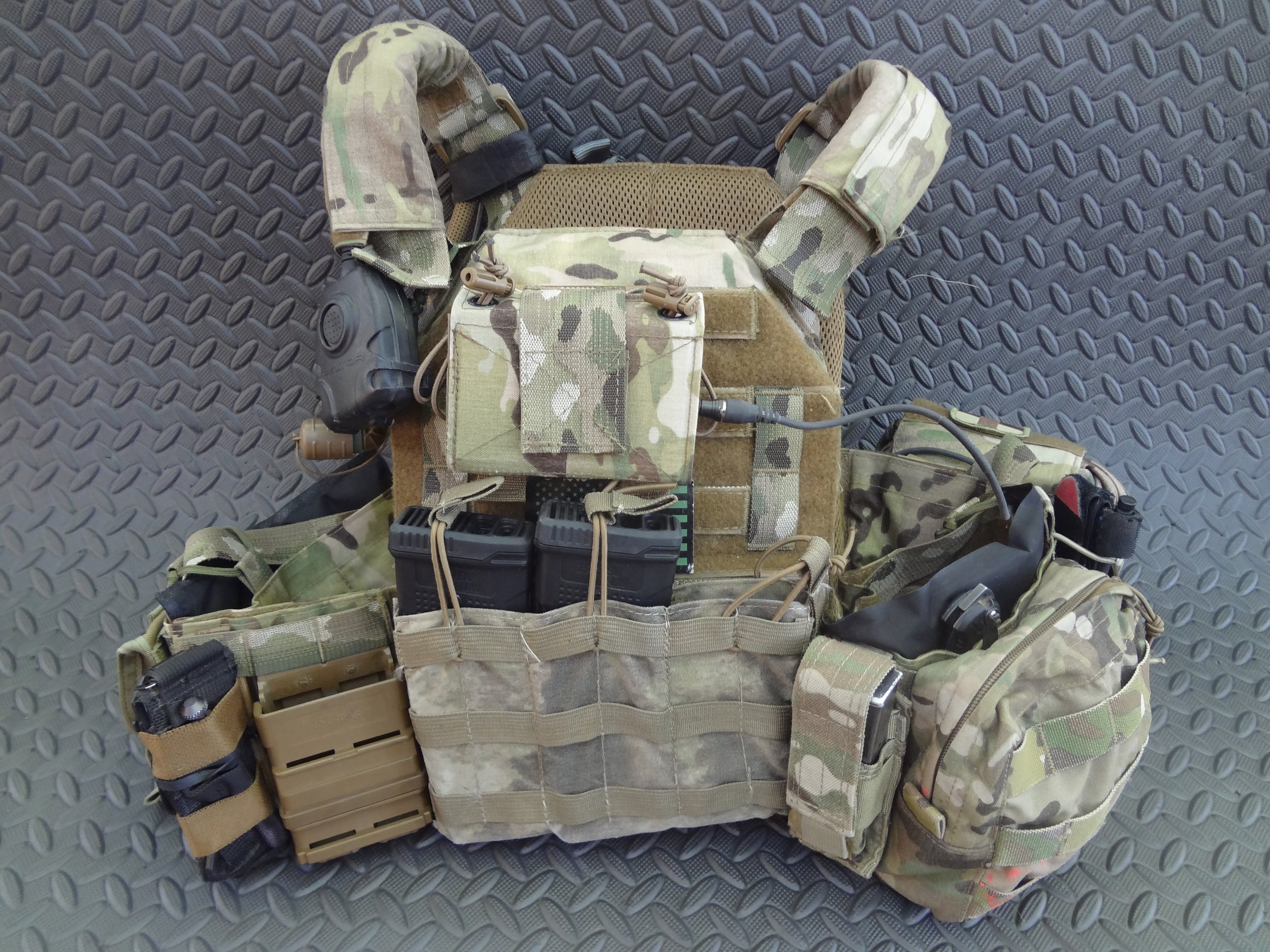 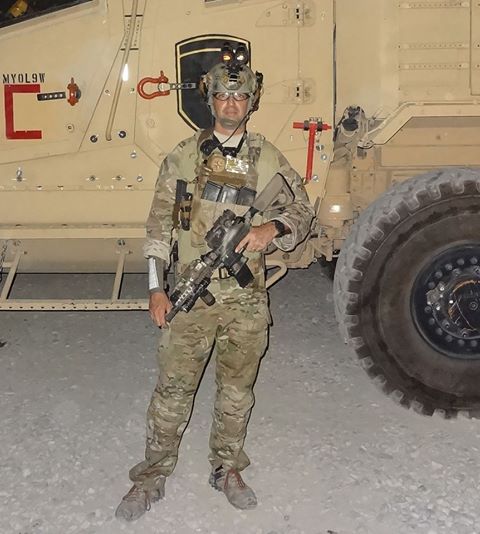 © Copyright 2015 DefenseReview.com (DR) and Jeff Gurwitch. All rights reserved. This material may not be published, broadcast, rewritten or redistributed without receiving permission and providing proper credit and appropriate links. If you are reading this article anywhere other than DefenseReview.com, please email us the website address/URL (where the unauthorized DR article reprint is located) at defrev (at) gmail (dot) com. Thank you.

David Crane started publishing online in 2001. Since that time, governments, military organizations, Special Operators (i.e. professional trigger pullers), agencies, and civilian tactical shooters the world over have come to depend on Defense Review as the authoritative source of news and information on "the latest and greatest" in the field of military defense and tactical technology and hardware, including tactical firearms, ammunition, equipment, gear, and training.
Previous Ross & Zheng Engineering RZE UNIMAG Multi-Caliber/Universal AR-15 Rifle Mag (Magazine) for Tactical AR Rifle/Carbine/SBR’s: Will it Actually Work?
Next Beretta/Wilson Combat 92G Brigadier Tactical 9mm Semi-Auto Pistol with Decocker (Decocking Lever Only, No Manual Safety): Customized for Combat! (Video!)