DefenseReview has been following the development and fielding of remote weapon stations (RWS) a.k.a. remote-controlled weapon stations a.k.a. umanned weapon stations for awhile now, including the Recon Optical, Inc. (ROI) Raven R-400 Alpha CROWS RWS, and we’re big fans of the Dillon Aero M134D and M134D-T Gatling Guns/Miniguns (7.62x51mm NATO (7.62mm NATO)/.308 Win.). So, we figured we might as well follow the development and fielding of the Remote Guardian System (RGS) on the USMC MV-22 and SOF CV-22 Osprey tilt-rotor aircraft. 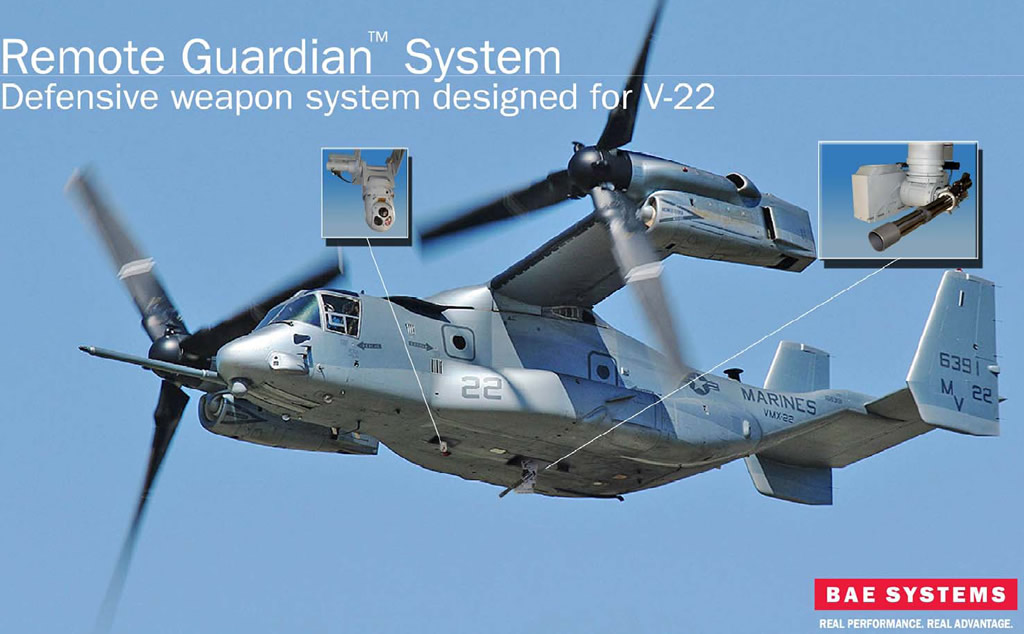 Manufactured by BAE Systems, the Remote Guardian System remotely-operated weapon system is basically an underbelly-mounted, retractable remote weapon station/gun turret armed with a modified GAU-2B Minigun/Gatling Gun, which is essentially the Air Force’s version of the M134D. As such, it allows the Osprey to deliver 7.62mm NATO rounds at 3,000 RPM (Rounds Per Minute) onto troublesome ground targets up to 1,000 meters away.

The UGS has 360-degree rotation capability, and is optically and weapon-stabilized. According to the brochure, the RGS’ "inertial and wind-corrected sight provides real-time lead and elevation compensation, generating a continuously computed impact point." It also states that the RGS is capable of greater than 45 deg/sec (degrees per second) line-of-sight threat tracking.

The system includes FLIR-type thermal/IR (infrared) and CCD (daylight) sensors and a remote gunner’s station, which appears to consist of a game-console-type remote control and flat-panel video screen.

The literature states that the RGS is modular, so it can be upgraded with more advanced components (including optics) as required.

Only time and combat action will tell how well the BAE Remote Guardian System performs in the enemy-suppression role on the V-22. In the meantime, we’ll try to look into how it’s performing to date, and we hope that the Osprey itself doesn’t end up killing more U.S. warfighters in combat than the enemy does. This is not a plane Defense Review would want to fly in regularly.  It’s still just a bit too risky for our tastes. We’ll wait until it’s been around a little longer and debugged some more.

David Crane started publishing online in 2001. Since that time, governments, military organizations, Special Operators (i.e. professional trigger pullers), agencies, and civilian tactical shooters the world over have come to depend on Defense Review as the authoritative source of news and information on "the latest and greatest" in the field of military defense and tactical technology and hardware, including tactical firearms, ammunition, equipment, gear, and training.
Previous Spike’s Tactical AKM and AR-15 Short-Barreled Rifles (SBRs) and Components
Next Foldable Flexible OLED (FOLED) Display Screens Coming Soon for Future Soldiers?