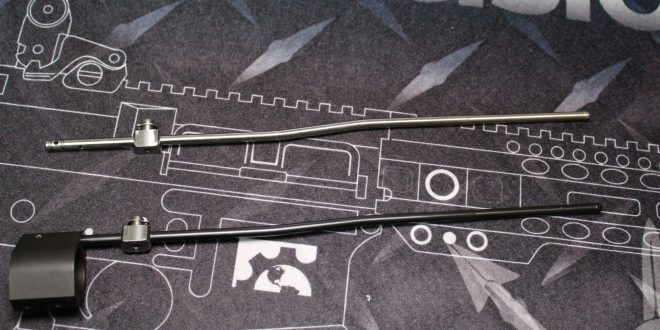 To be honest, I used to not really have much interest in adjustable gas blocks for DI (Direct Impingement) AR-15s, partly because I’ve been a piston AR guy forever (and almost all piston guns have adjustable gas systems, anyways). But the main reason for this is that the majority of adjustable gas blocks rely on some sort of tension screw that, once set at the desired gas flow rate, must be Loctited in place to secure it from coming loose and backing out.

So, while you have the benefit of tuning the gas system to a certain level, allowing for optimum performance based on a certain round, having to Loctite it in place, you lose the ability to adjust it on the fly (say, if you change loads, or put on a suppressor). Now, I said “I used to not really have much interest”. That’s because I’ve just recently discovered one item from Barnes Precision Machine (BPM) that not only allows you to adjust the gas flow on the fly with any DI AR-15, but also, doesn’t require any Loctite to set it in place.

BPM’s Accu-Set Adjustable Gas System is a fully-adjustable gas tube that’s a drop-in replacement for the standard gas tube in a DI AR, giving one the ability to change the gas setting and tune the gas to specific loads, or adjust for correct pressure when running a suppressor.

With permission from the folks at MGI, Andrew Barnes, founder and owner of BPM, took MGI’s adjustable gas tube (which relies on a set screw to adjust it, then Loctite to keep it in place) one step further and incorporated a very tiny ball bearing into it, giving it positive click adjustments as opposed to just a screw that you turn and adjust by feel.

The result is that one now has the ability to change the gas settings at any time via counting clicks in or out, which changes the amount of gas flow through the tube. Plus, by not relying on a chemical bond (Loctite) to keep it in place, there’s no worry about heat from use eroding any chemical seal, and leading to the set screw coming loose and possibly allowing excessive gas flow that would lead to increased felt recoil and wear on parts by driving the BCG (Bolt Carrier Group) harder in the gun. 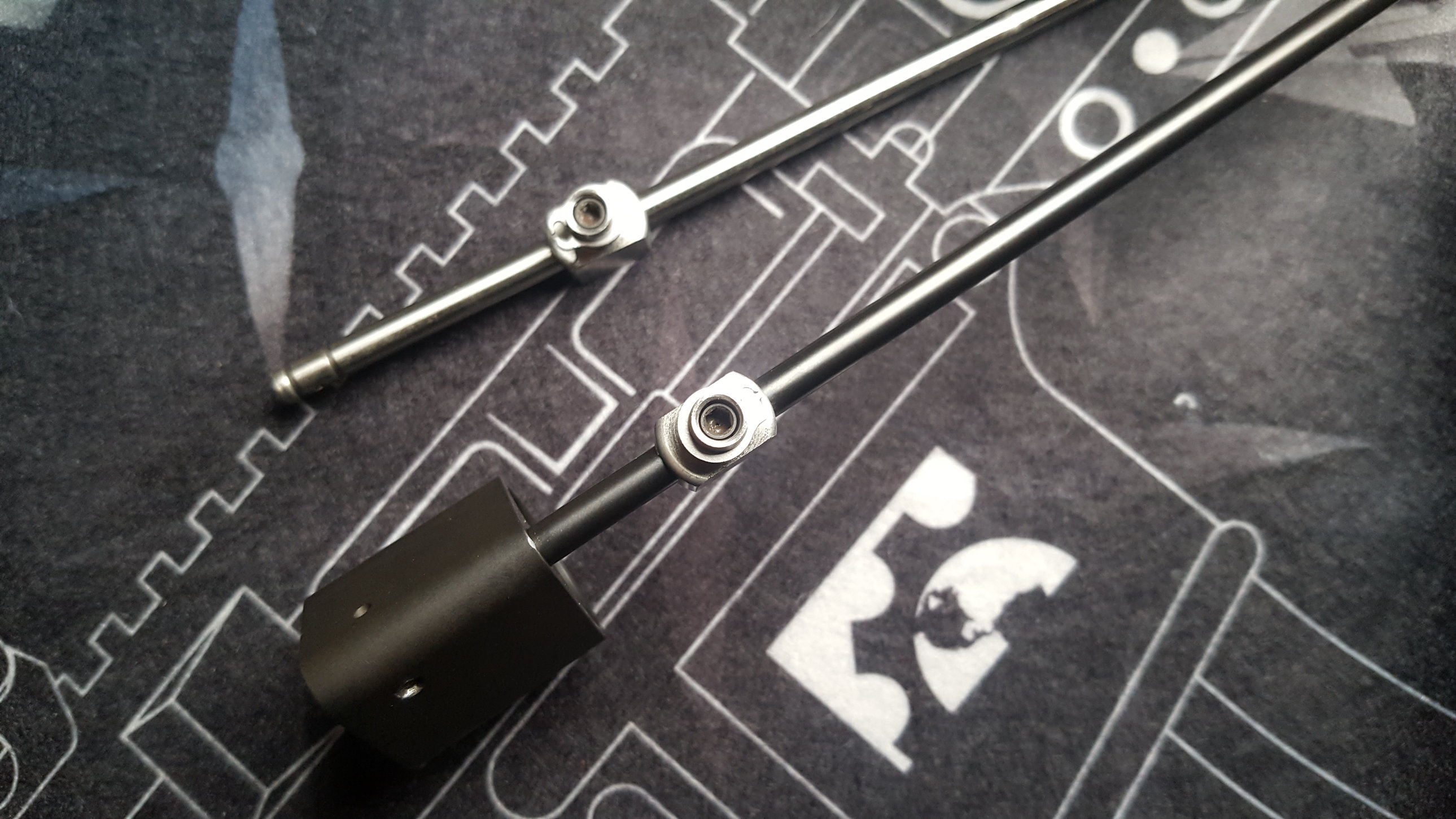 What separates BPM’s Accu-Set from many other adjustable gas blocks and tubes? Positive click adjustments, no need for applying some sort of thread locker after setting the gas amount. (Stainless steel top, NITRO-Met coated bottom).

Many ARs come from the factory slightly over-gassed for the sake of reliability, so that they’ll run any ammunition, including low budget ammo brands. Of course, an over-gassed gun can cause unneeded stress on moving parts, with the extra pressure unlocking the bolt and slamming the bolt carrier back in the gun harder than required. This can cause premature wear on parts, including gas rings wearing out faster, and bolt lugs breaking from harder-than- required unlocking.

The increase in force from an over-gassed AR also means increased felt recoil. The harder the bolt carrier and bolt are slammed back into the gun, the more you’ll feel the oscillation of the weight of these parts. That’s why many competition shooters opt for lighter bolt carriers and adjustable gas systems. The lighter weight of these parts (and less pressure required to move them) results in a lot less felt recoil.

Installing and adjusting the Accu-Set Gas System (Block and Tube) 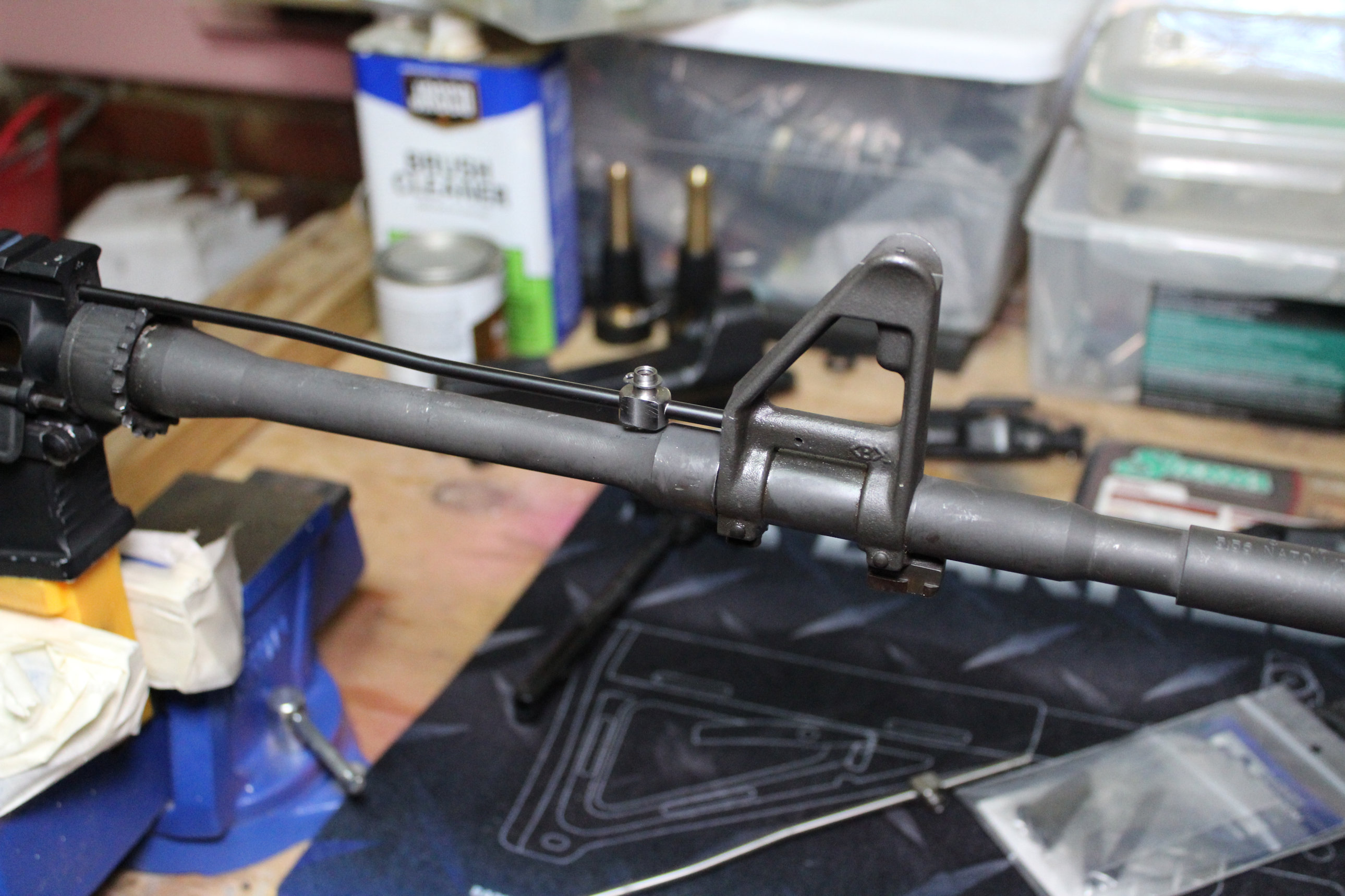 Installing the gas tube was easy. I chose to go with the NITRO-MET coated version for my 14.5″ DI AR carbine.

The reason? The hand guard on the rifle, a Samson MFG, STAR series quad rail, has a cutout for a front sight post, so there’s no need for a low-profile gas block. Plus, swapping gas blocks on a well-used AR can often be very challenging. This is one of the main reasons I never looked at adjustable gas blocks in the first place. I’m frankly too lazy to deal with the hassle of swapping blocks, but only swapping out gas tubes is easy, and installing it was a breeze.

The biggest challenge with any fully-adjustable gas system is tuning it for the correct gas flow amount needed to reliably cycle the BCG with all the types of ammunition one may use. I recommend tuning it with the lightest ammunition you shoot, therefore it will run anything heavier (as opposed to vice versa). You do not want to tune the gas system with SS109 (M855), 62gr. Green tip, then expect lighter 55gr. 223/5.56 ammunition to run well.

How to tune it: The easiest way is to first dial in the gas all the way closed to lock out (smallest gas amount allowed through). Then, with only one round in a magazine at a time, fire it. Then, if the BCG doesn’t lock back on empty, adjust the gas out one click. Repeat this process of shooting one round, observing, and then dialing open 1 click until the BCG locks back on an empty magazine after firing a single round.

Once this happens, you’ve now reached the minimal amount of gas required to cycle the rifle. Once you hit this point, I recommend dialing out an additional two clicks, thus ensuring you have plenty of gas to run any ammunition reliably. For my rifle, it took a total of opening up the gas flow eight clicks to achieve the bolt locking back on an empty magazine. After reaching this point, I did open it up an additional two clicks just to ensure it would run reliably with all three types of ammunition I normally use.

So just how well does the Accu-set adjustable gas tube work? In short, fantastic! Not only was there no hassle tuning it thanks to the positive click adjustments, I feel a lot less recoil after adjusting the gas in my AR. Aside from saying the rifle’s recoil felt smoother, I wanted to try to quantify what I was feeling. To do so, I shot multiple times one of my favorite drills multiple times and compared the speed I was able to shoot using the AR with the Accu-Set gas tube against the average time I can do the same drill with a 3-Gun race rifle outfitted with a compensator and hydraulic buffer.

Kyle Lamb’s 2x2x2 drill requires one to shoot three targets with two shots each from five meters away, as fast as you can. The goal is to complete the drill in under two seconds, with good center hits. If you’ve seen any of my previous DR videos, then you already know it’s my favorite drill to test optics for close-range shooting. Normally, the only time I can get under 1.5 seconds with good hits is with a race gun. With a combat duty-type standard MILSPEC AR, my times are usually between 1.6 and 1.8 seconds (with good hits).

After shooting the 2x2x2 drill six times with the Accu-Set-equipped standard AR, not only was I able to shoot under 1.5 seconds for five of the six runs, I was able to get under 1.4 seconds clean (all A’s) twice, shooting the six shots in 1.38 seconds, and then even faster with a 1.34 second run! Thank God I have the 1.34-second run on video.

I credit being able to shoot this fast and maintain accuracy with a normal AR (with just a flash hider) to the BPM’s Accu-Set gas tube. Adjusting the gas down to where I had just the right amount of gas flow needed to cycle the rifle reliably really cut down on the felt recoil, allowing me to settle the rifle back down faster on target between shots, which of course allowed for faster shooting.

Author’s Note: Watch the attached video below to see how I tuned it, and to see me running some shooting the 2x2x2 drill at the range.

One thing that needs to be mentioned is handguard compatibility. Since the whole system is built around the gas tube, it does require a certain amount of space under a handguard to fit it. I only own two DI rifles, one with the Samson rail, which fit no problem. The other one has an old Knights Armament RAS rail that it would notfit under, due to the locking tab on the front of the RAS taking up extra room under the handguard. 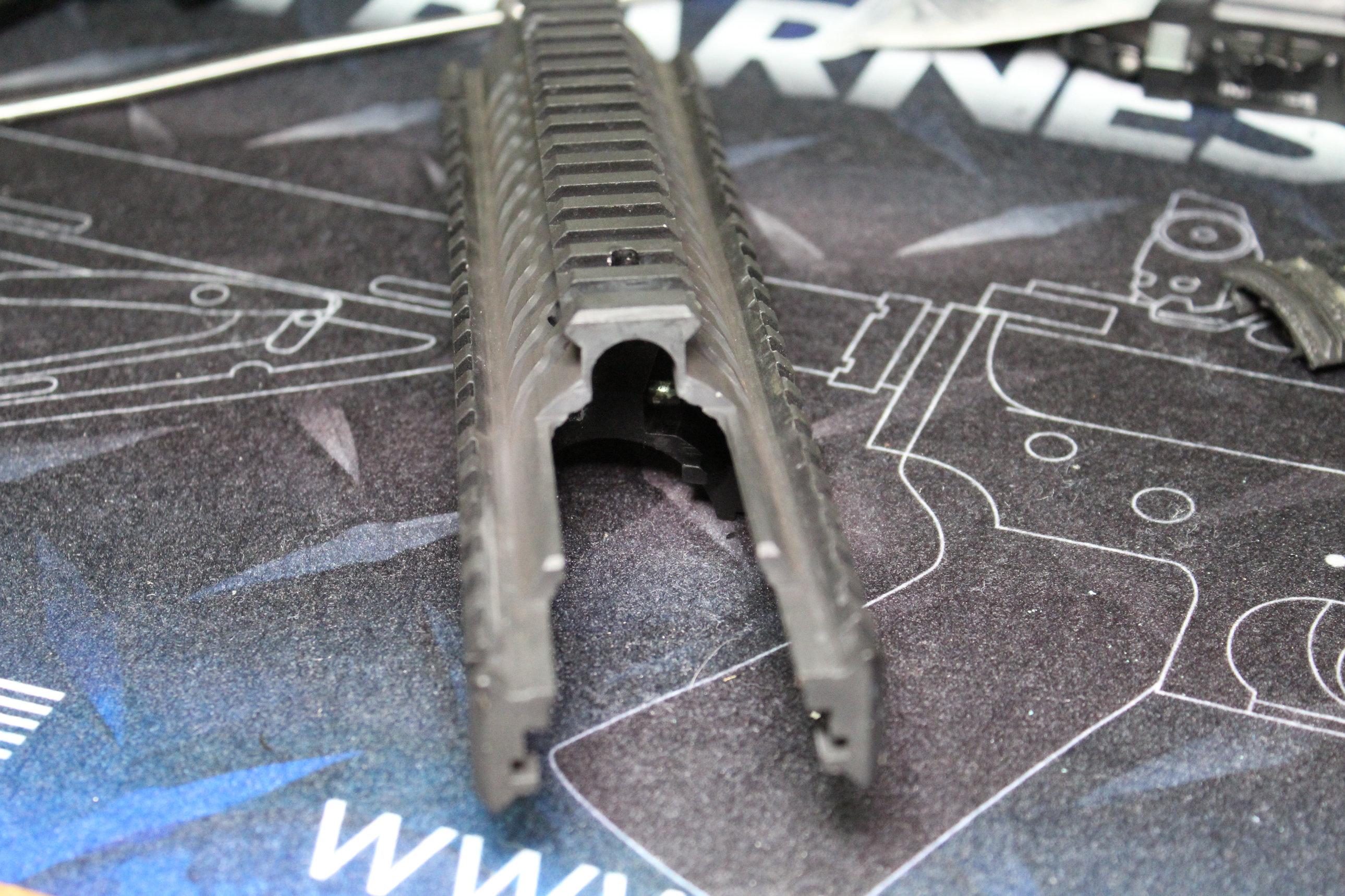 If the handguard you have has a gas tube channel like this, there should be no issues with the Accu-Set gas tube fitting under it.

To be able to fit under the handguard, there needs to be a generous gas tube channel. All current BPM handguards are compatible with the Accu-Set gas tube. Also, while you can install the gas tube, tune it, and then mount the handguard over it and forget it, in order to have the ability to go back and adjust the gas on the fly, there has to be a hole in the handguard that allows access to the adjustment screw. 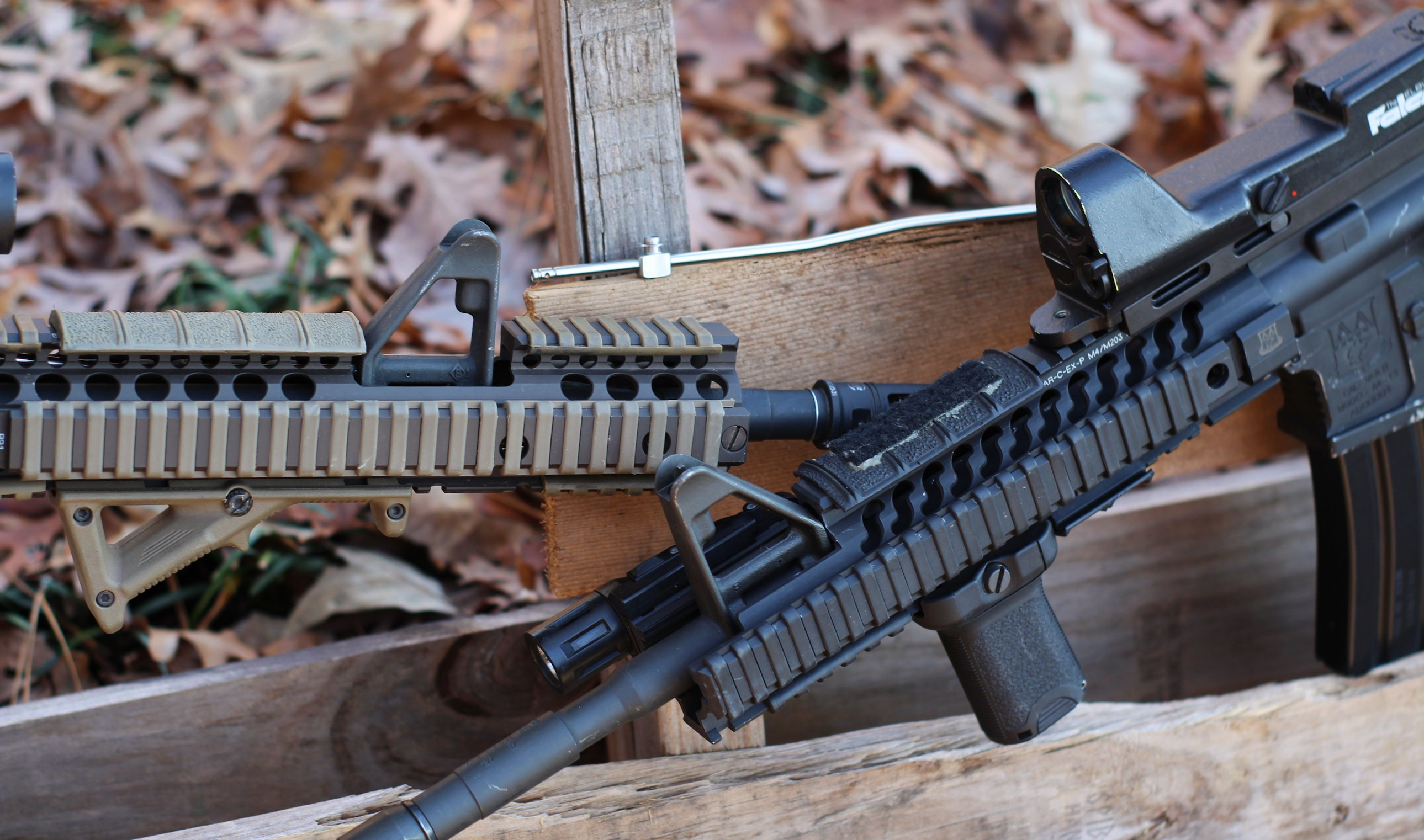 Again, all new-model BPM handguards have openings for both carbine and mid-length access, but if the handguard you’re using has no openings, you’ll need to drill one–that is, only if you want to be able to go back and change the gas settings after tuning it, like wanting to dial gas down after mounting a suppressor. 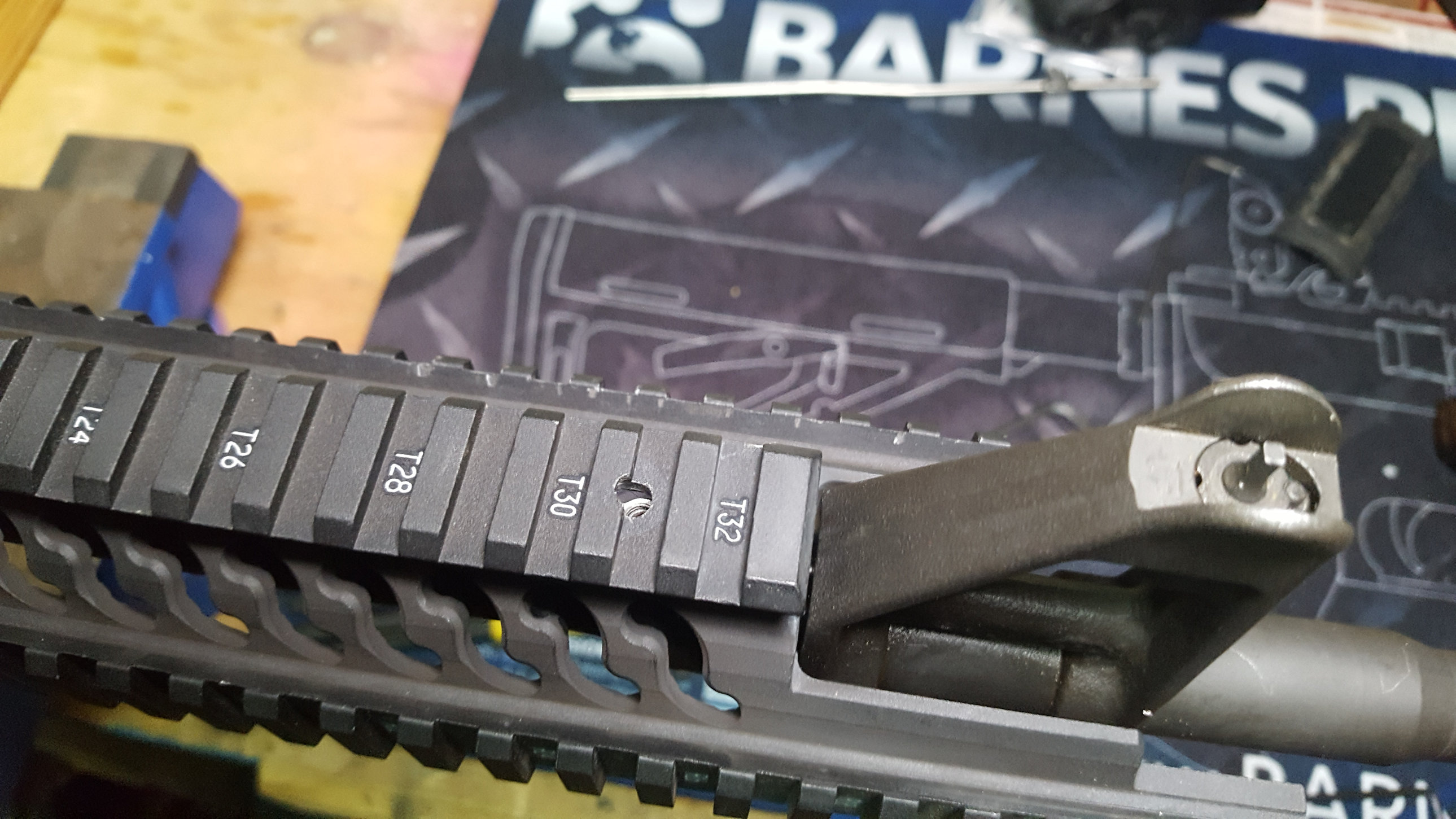 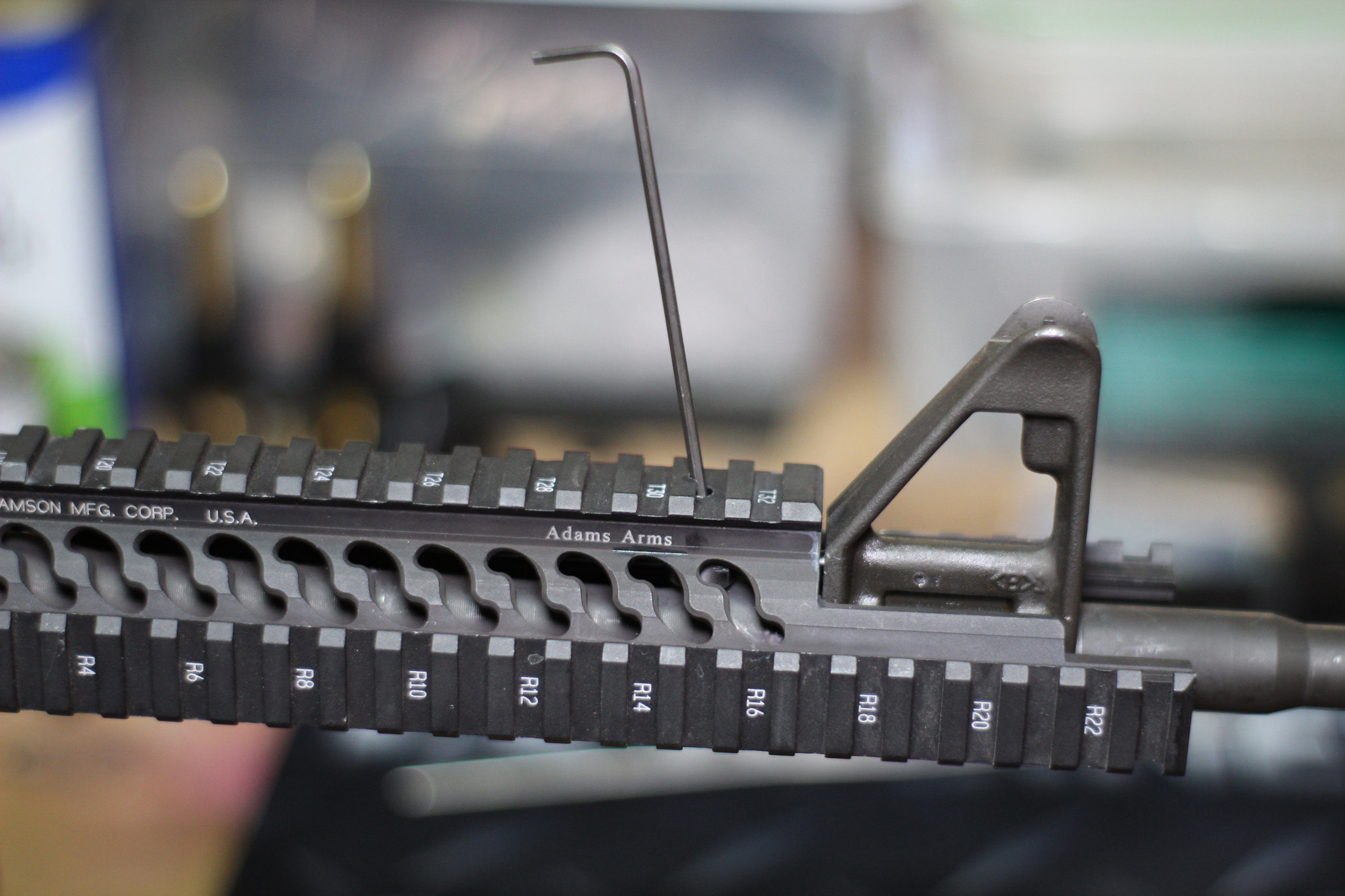 To have access to adjustment screw if you want to be able to change gas settings on the fly. There needs to be an access port in the top of the handguard. I drilled my own, just big enough for the 3/32 Allen wrench to fit into. For me no big deal since when shooting its covered up by a Magpul rail cover.

Now, I know many of you might not be too thrilled at the idea of drilling a hole in your $300-plus handguard. For my rifle, I did it, drilling a hole just large enough for the 3/32 Allen wrench to go though. The good news is that if you don’t trust yourself not to butcher your handguard trying to drill a hole in it, BPM offers installation service for the Accu-Set. So, you can not only have the gas tube and lo-pro (low-profile) gas block installed by professionals, but you can also have a hole drilled in the handguard by professional machinists at BPM.

After running and gunning with a BPM Accu-Set Adjustable Gas System-equipped AR, I can honestly say I don’t think I would own a DI AR without one now. The decreased felt recoil alone is enough to justify spending the $61.00 USD on one ($105.95 USD if you have BPM install it for you). Think about it. That’s half the price of most of the compensators out there, as well as many of the various hydraulic buffers and other items designed to reduce felt recoil. Unfortunately, all my race rifles with compensators are gas piston guns, so I can’t use the Accu-Set with them. However, for DI ARs, I think BPM’s Accu-Set Adjustable Gas System is a must-have accessory for reduced felt recoil and extending the life of the working parts in the gun. Who doesn’t want that? 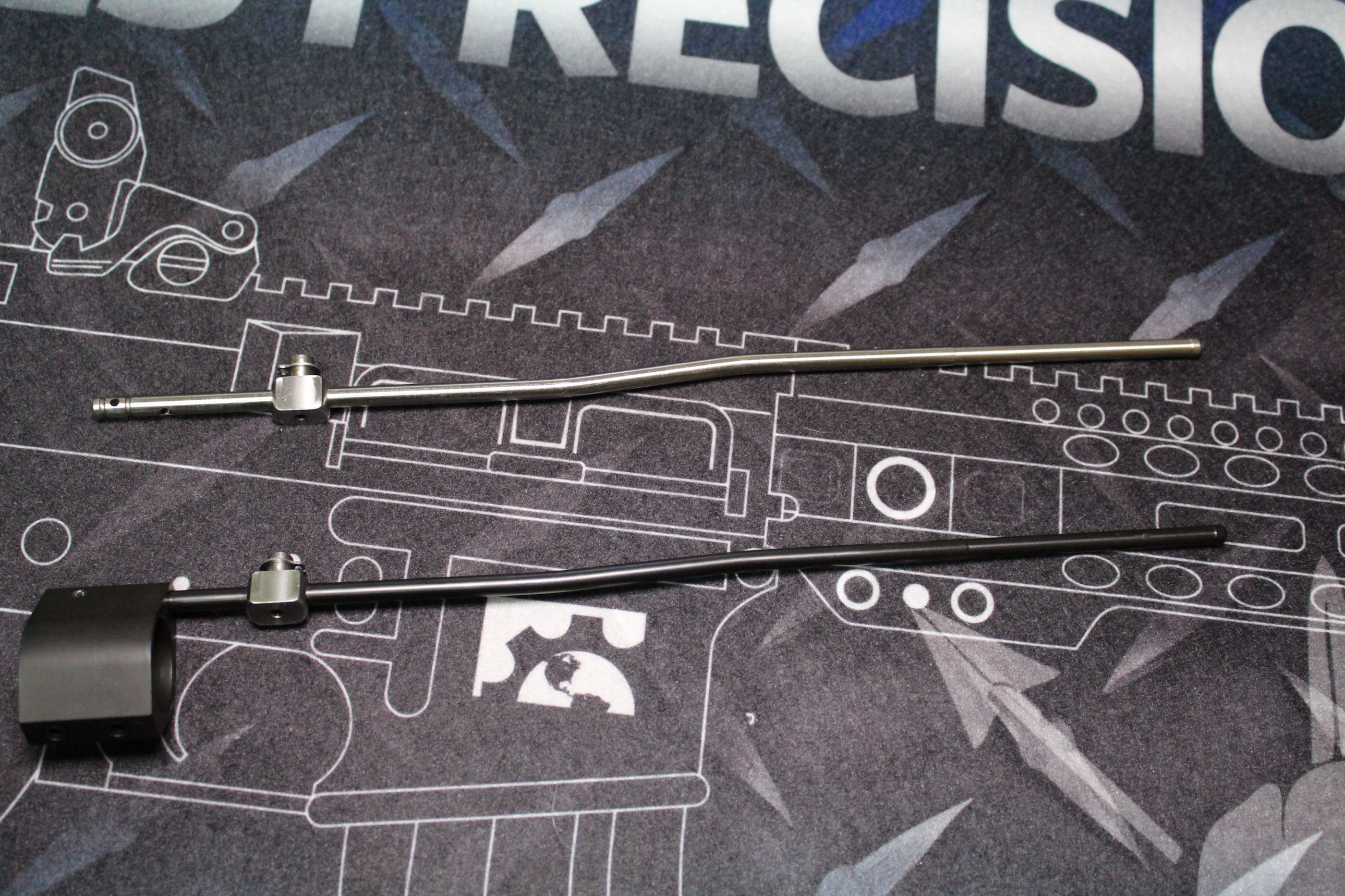