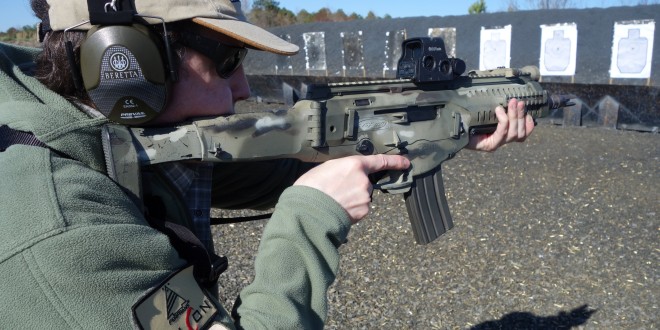 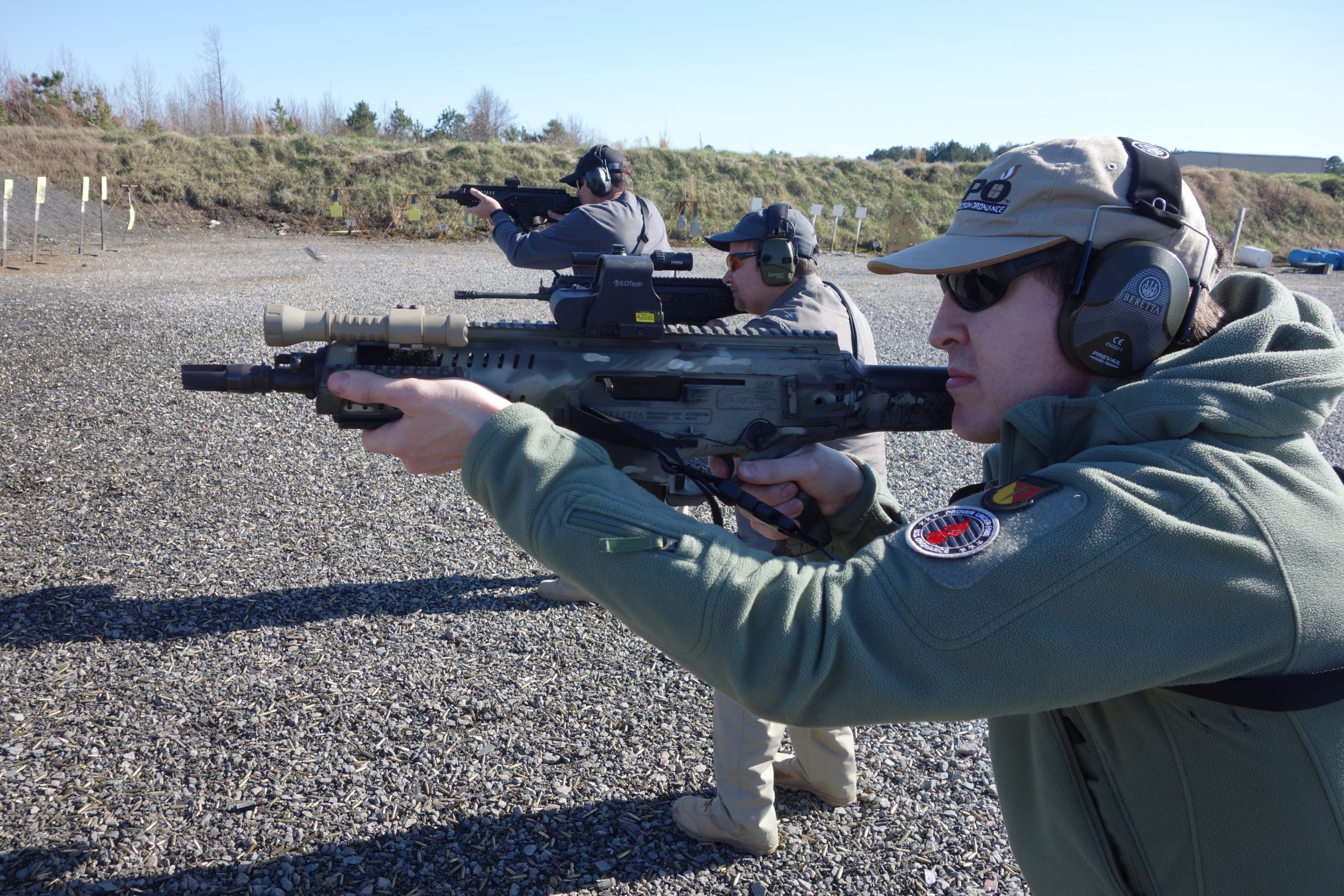 DefenseReview (DR) finally got to really run the Beretta ARX-100 5.56mm NATO (5.56x45mm)/.223 Rem. semi-auto-only tactical rifle/carbine/SBR (Short Barreled Rifle) at the range during a tactical carbine course at the 2015 Beretta Tactical Summit (BTS) at ACADEMI (formerly Blackwater), in upper North Carolina. The ARX-100 is the civilian-legal/commercial version of the Beretta ARX-160 assault rifle/carbine/SBR, which DR originally covered at NDIA SOFIC 2011. That piece is worth checking out for the photos and videos alone. But seeing the Beretta ARX 100/ARX 160 platform and shooting it are obviously two very different experiences, especially when you get to do it at night with a PVS-14 night vision monocular and an infrared (IR) tactical aiming laser (laser sight). 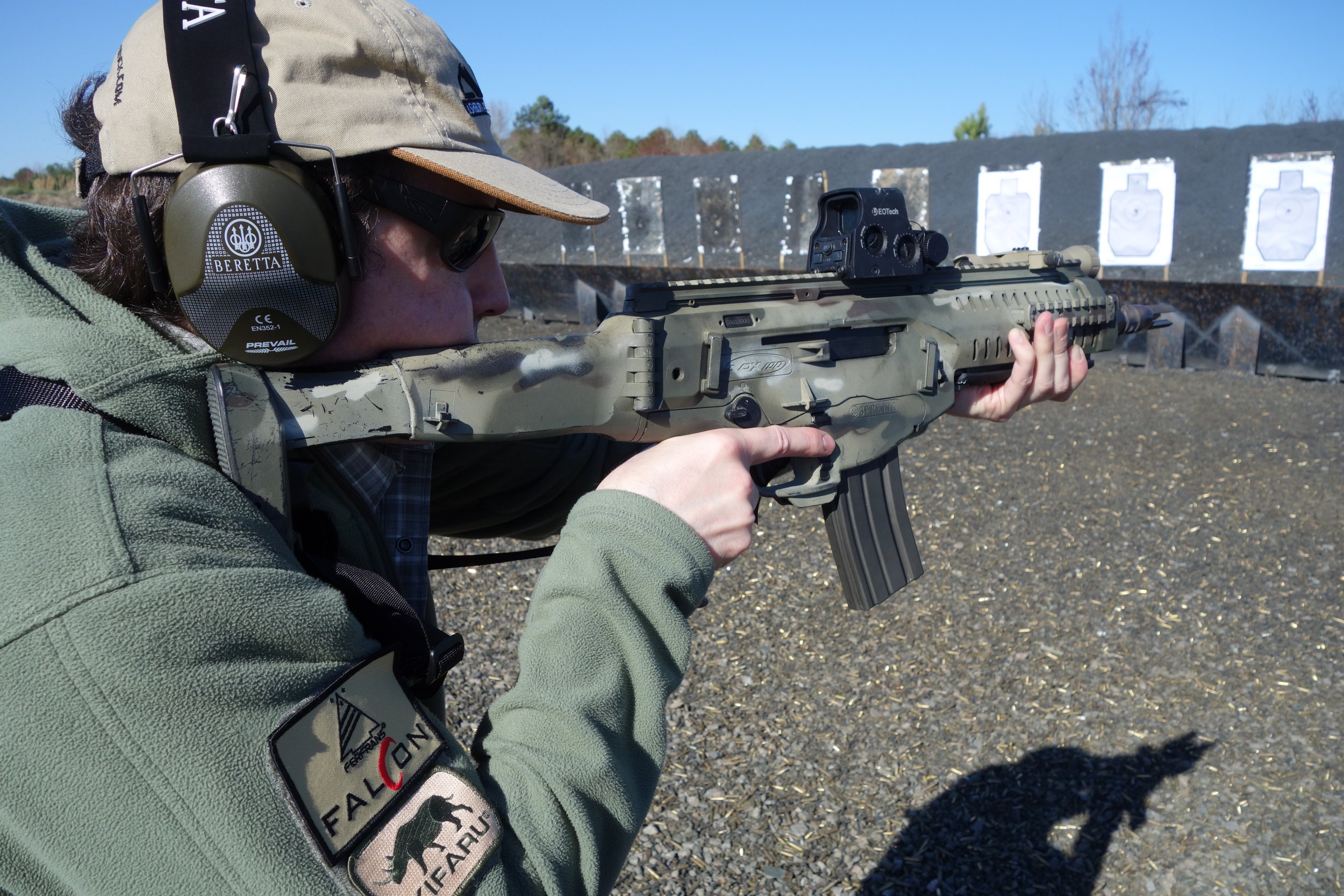 We here at Defense Review are major tactical AR (AR-15) fans, but the Beretta ARX-100/ARX-160 platform is a VERY interesting design, due to its space-gun design aesthetic and its incredible modularity, not to mention its ambidextrous controls. The ARX 100/ARX-160 platform essentially out-SCAR’s the SCAR (specifically the FN MK 16 SCAR-L) in terms of modularity and ambidexterity, spefically with regard to the left/right quick-swap ambi charging handle and quick-change-barrel (QCB) features. That said, as cool as the ARX-100/ARX-160 platform is, and it’s indeed very cool, it’s still not an AR. Since the weapon’s receiver makes extensive use of polymer and must fit the QCB system inside it, it’s quite a bit bulkier than an AR, particularly in the forend section. The top rail also sits a bit higher than the AR’s top rail, creating a little more barrel offset, which effects your hold-over while shooting at CQB/CQC (Close Quarters Battle/Close Quarters Combat) distances. 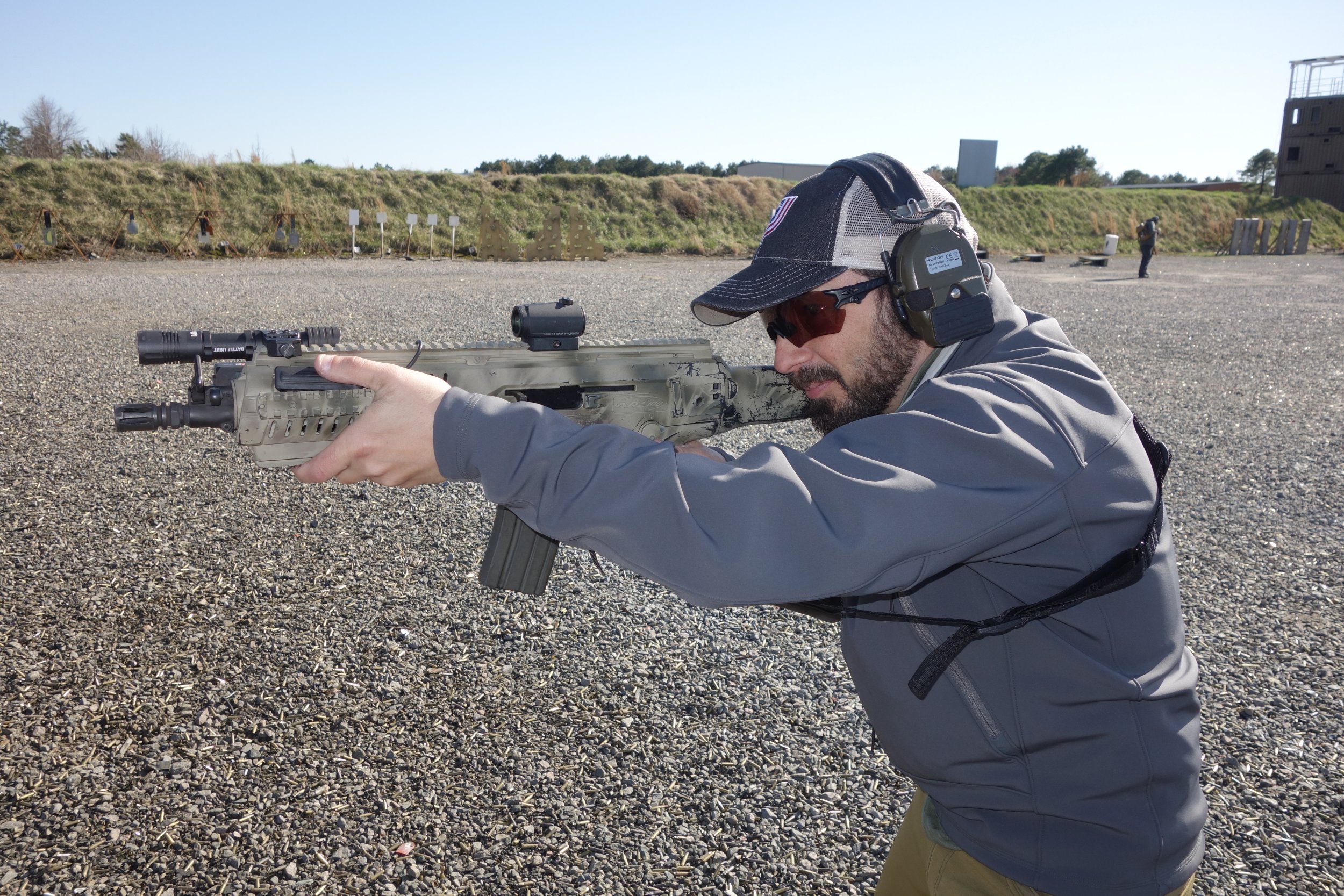 Being bulkier, the Beretta ARX-100/ARX-160’s ambidextrous safety/selector switch is a bit more difficult/less ergonomic to operate than an AR’s ambi safety/selector, even if you have good-sized hands like your humble correspondent. You also can’t use a C-clamp grip on the ARX 100/ARX 160, as is now de rigueur with a lot of tactical and competitive shooters. Since DR prefers to run our weak-hand/support shooting thumb along the side of the forarm/forend with the thumb pointing straight forward, just like on a pistol (see photos), we didn’t really mind this aspect as much. That said, we would have preferred to have had a stubby vertical foregrip to assist with weapons handling and carrying. For the record, we like to run two fingers on the rail and two fingers on the grip, creating an angled foregrip effect, without having to actually use an angled foregrip, which gives up the stubby’s weapon retention and control (and weight support) capabilities.

The specific gun DR ran during the tactical carbine course was a Beretta ARX-100 tactical SBR with arid/desert camo (camouflage) paint scheme, outfitted with an EOTech 550-series HWS (HOLOgraphic Weapon Sight) combat optic and a two-point sling. Being a bit different from an AR, the gun took a little getting used to, but once we settled in with it, we got to rockin’ n’ rollin’ pretty good. The ARX-100 SBR was fairly light and handy, and the weapon’s folding/telescoping stock (buttstock) allowed us to get good eye relief and a comfortable cheek weld. The gun was easy to keep on target during rapid shooting strings, even during the night shoot, where we were using a tactical white lights with a Steiner eOptics DBAL-A3 (Civilian Dual Beam Aiming Laser – Advanced 3) in visible laser mode and PVS-14 night-vision monoculars with the DBAL-A3 laser aimer in infrared (IR) laser mode, both in almost complete darkness. 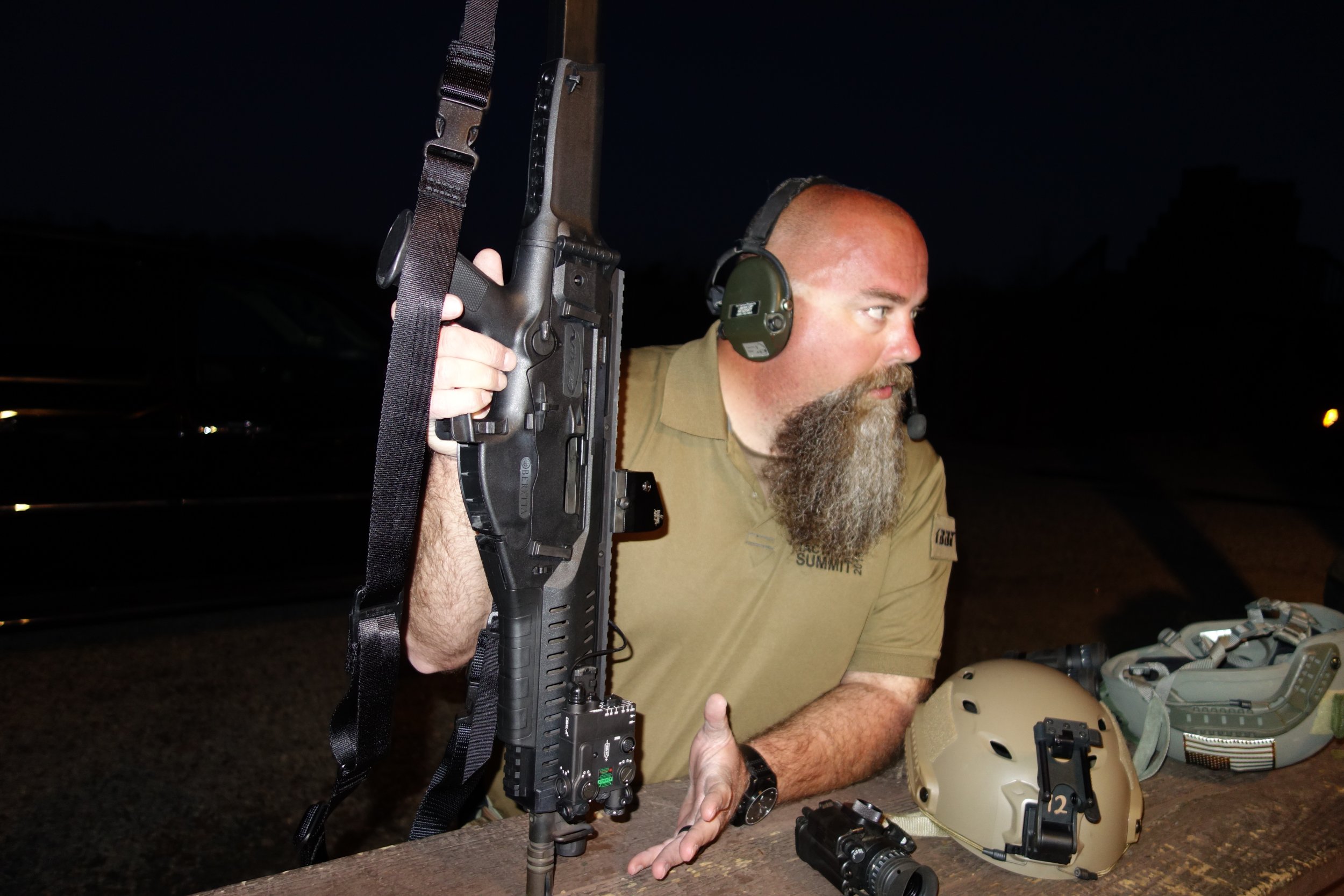 EAG Tactical and Beretta Defense Technologies (BDT)/Steiner eOptics shooting instructor John “Chappie” Chapman did a terrific job getting us writers up and running very quickly in both visible and IR shooting modes. Frankly, he had to, since we didn’t have a lot of time at our disposal. DR would like to do some more low-light/no-light operations and shooting training using NOD’s (Night Observation Devices) as soon as possible, as we believe it to be a very important skill to have in one’s arsenal. Tactical hardware’s great, but never forget the software (training and resultant skill sets).

Anyway, its bulk aside, DefenseReview enjoyed shooting the Beretta ARX-100, and we believe it to be a viable alternative to an AR once you get used to it (provided it proves reliable, accurate and durable at high round count during military-grade testing), and an excellent additional gun to have in the safe, as part of your collection. It’s got a lot of really neat features on it, and we really dig its modular features.

If you already own an ARX-100 and you’d like to be able to train with it on the cheap, might we suggest the Beretta ARX160 .22 LR (Long Rifle) tactical rifle/carbine, which “looks, feels and handles like its full-size counterpart”? Same look, same feel, same ambi controls–and it’s “constructed superior steel and technopolymer”. 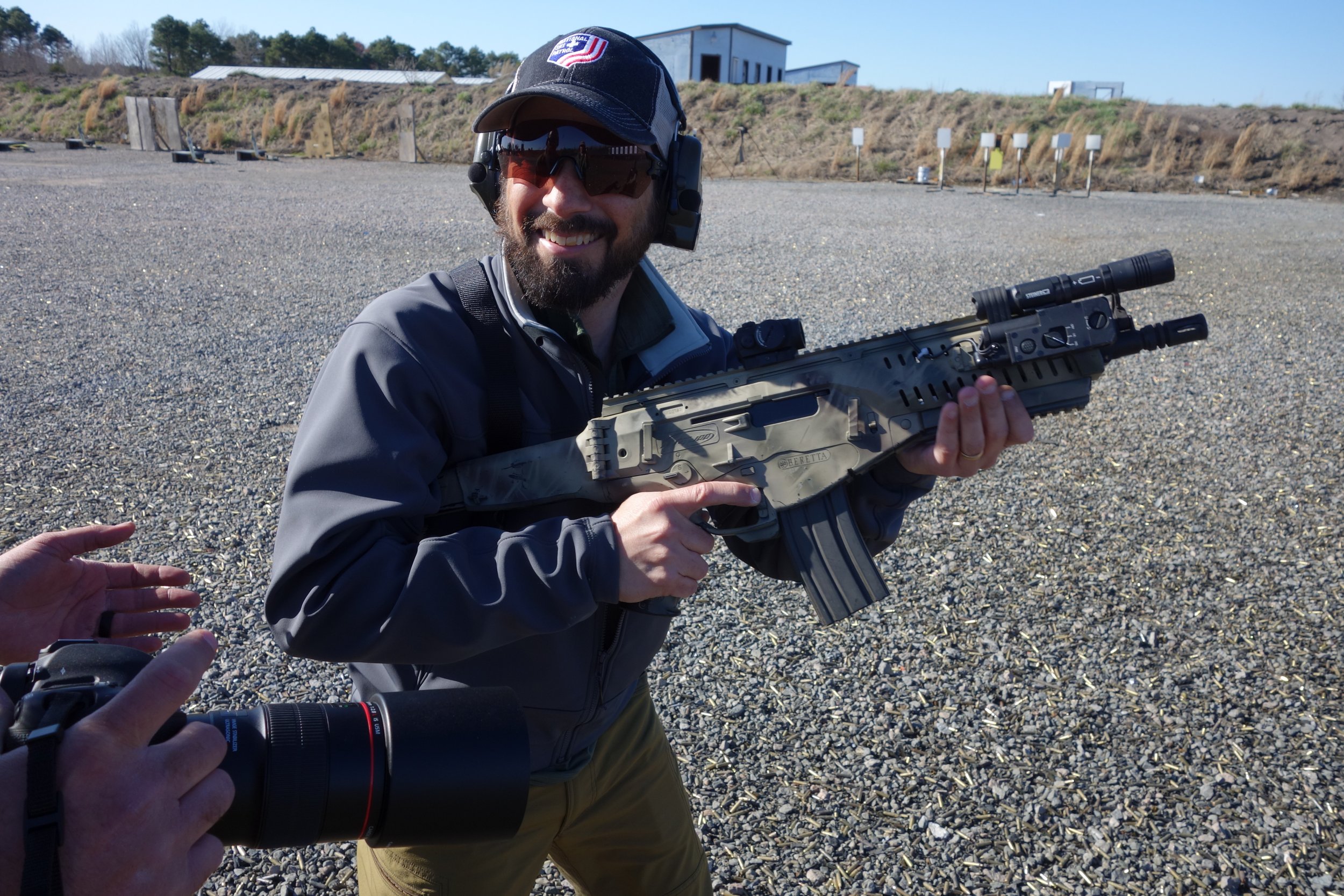 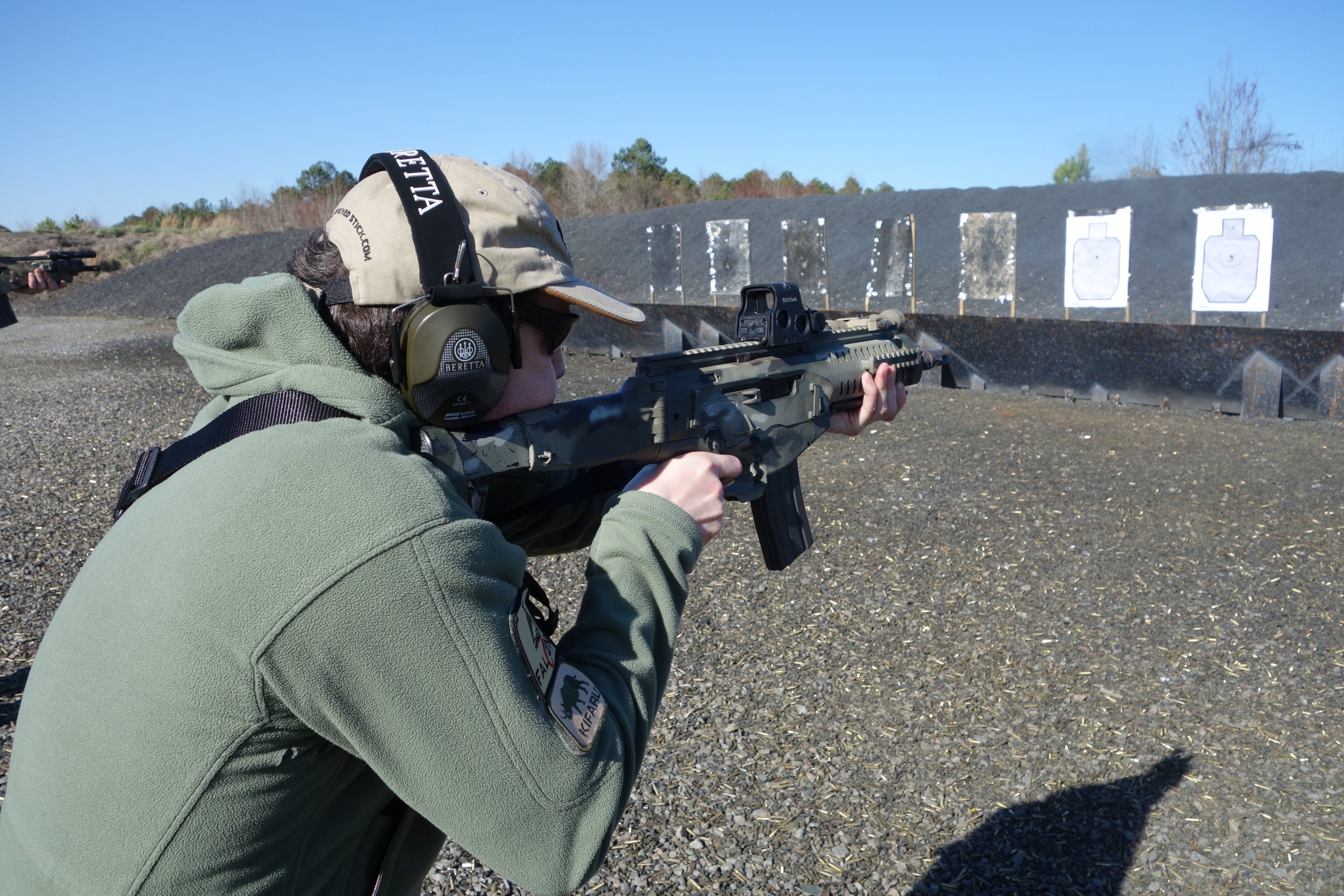 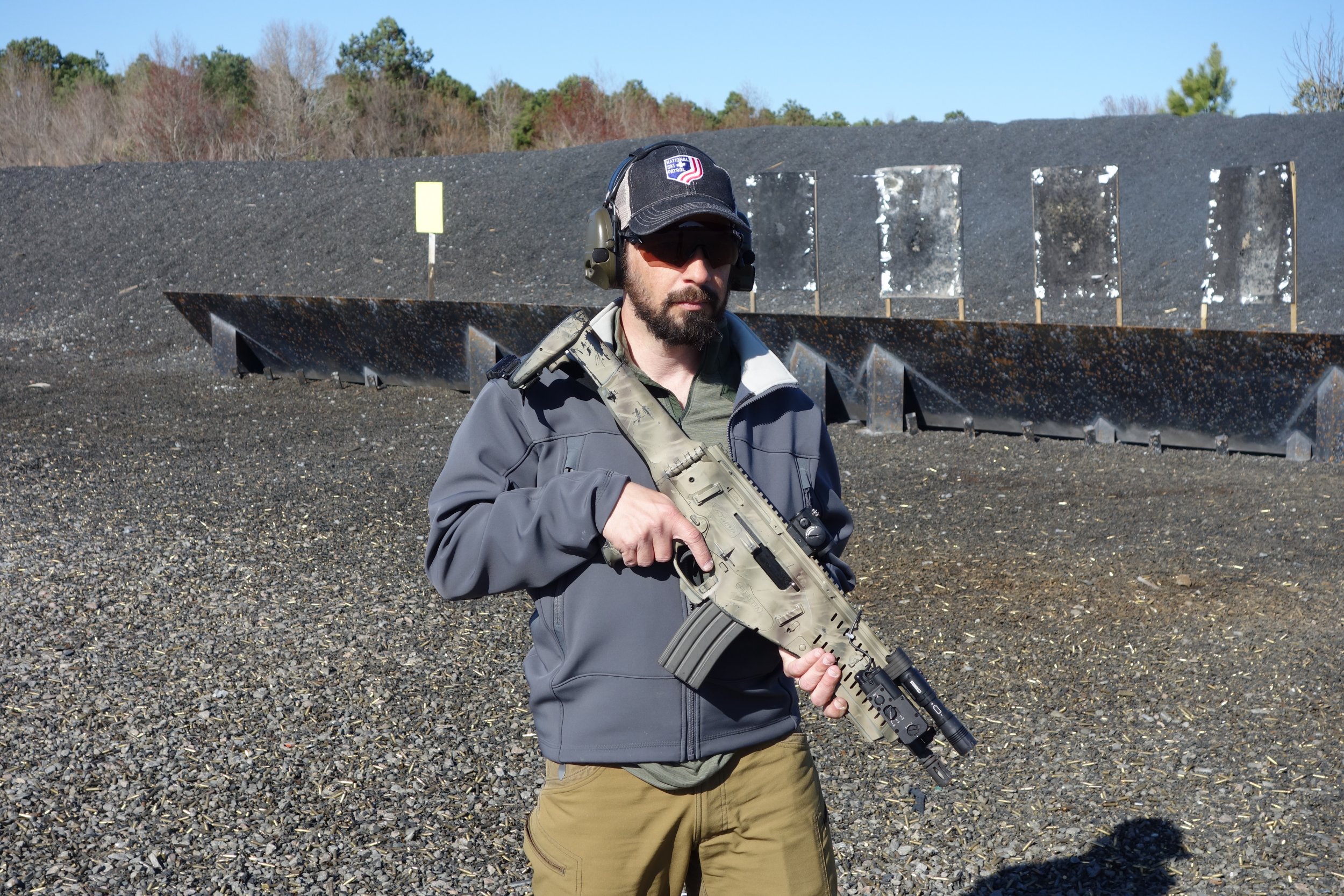 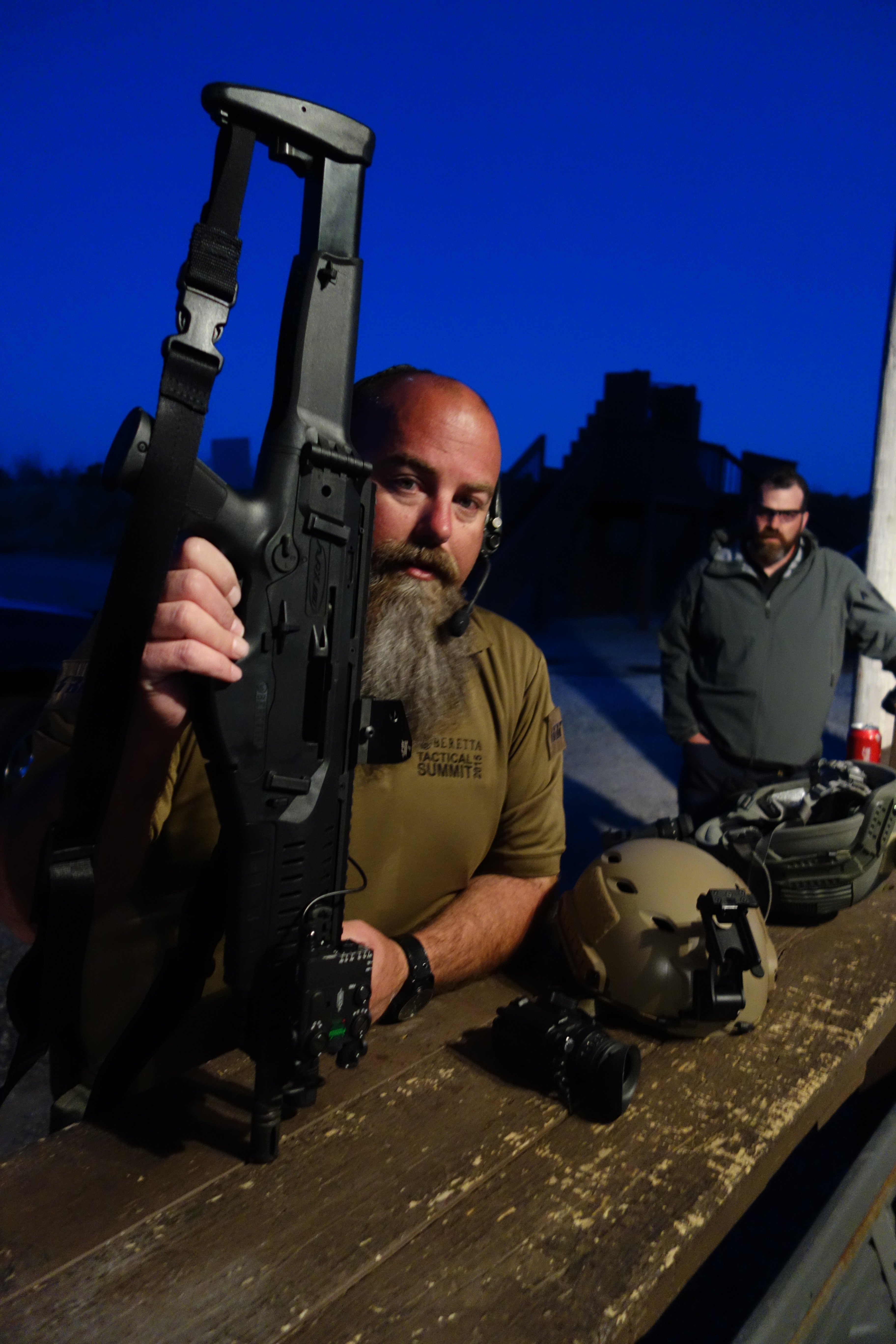 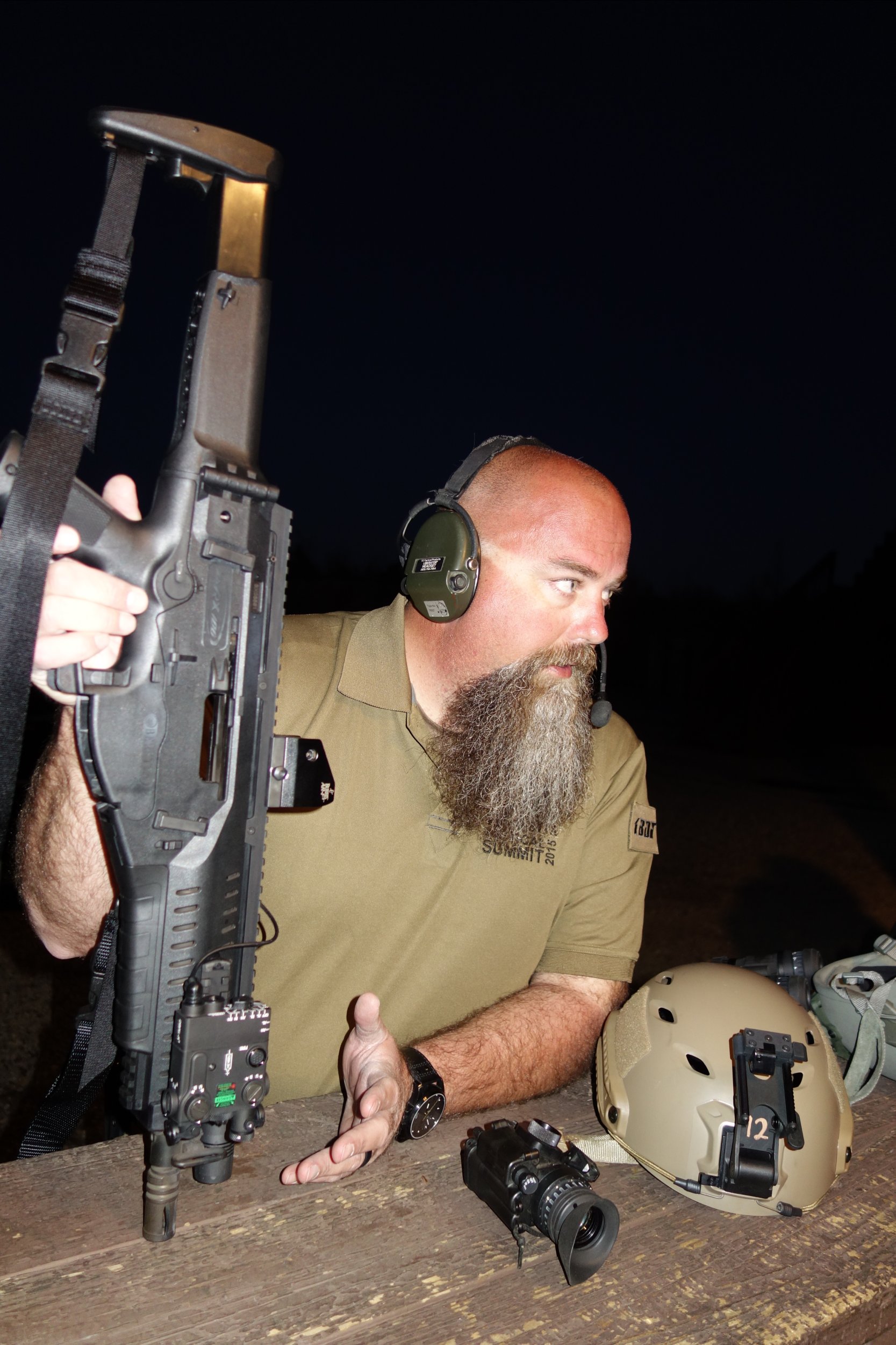 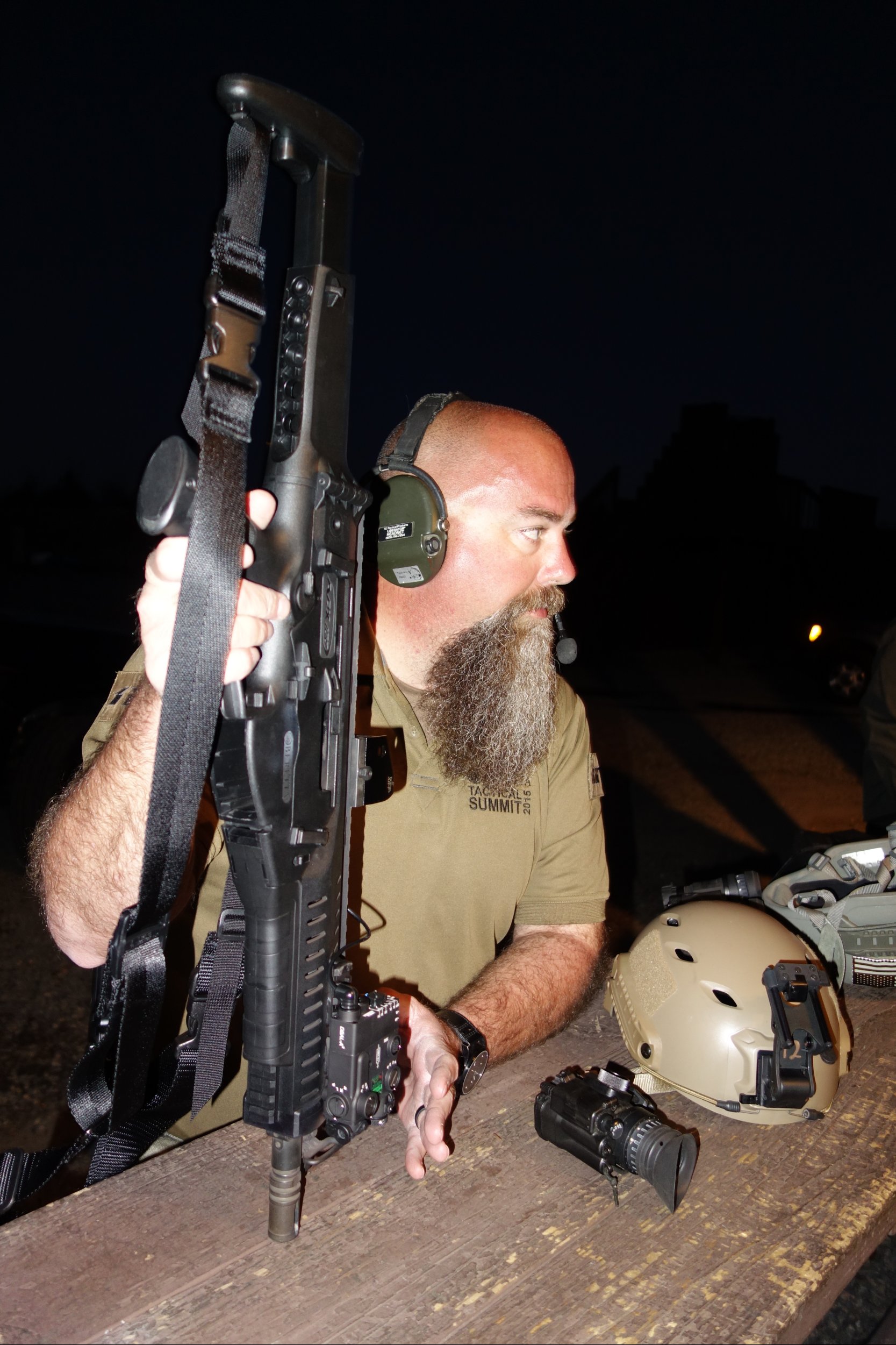 David Crane started publishing online in 2001. Since that time, governments, military organizations, Special Operators (i.e. professional trigger pullers), agencies, and civilian tactical shooters the world over have come to depend on Defense Review as the authoritative source of news and information on "the latest and greatest" in the field of military defense and tactical technology and hardware, including tactical firearms, ammunition, equipment, gear, and training.
Previous Patriot Ordnance Factory POF-USA Dictator Regulating Gas Block with Straight Gas Tube, and Archangel Ambi (Ambidextrous) Charging Handle(s) for AR-15 and AR-10/SR25 Tactical Rifle/Carbine/SBR’s at 2015 NRA Show
Next Glock 43 Single-Stack 9mm Pistol Gets Range-Tested by hickok45: Watch Some Steel Get Pounded! (Video!)