Click on digital photos below to view them full-size and in correct proportion.  All digital photos contained in this article are the exclusive property of DefenseReview.com.

While I was at SHOT Show 2005 earlier this year, I made the smart decision to stop by the Blade-Tech booth. While Blade-Tech is famous for making high-quality kydex holsters/carry rigs and knife sheaths, what actually caught my eye at their booth was a tactical folder called the Blade-Tech/Wegner Professional Hunter Extreme (or Pro Hunter Extreme). The knife I saw had a purposefully-shaped black blade and combo edge (partial serrations) and a black G10 handle. Even with the politically-correct "Professional Hunter" name, I immediately recognized the knife as the tactical carry knife it was. So, I asked to handle it.

As soon as the Blade-Tech/Wegner Professional Hunter Extreme, designed by Tim Wegner. Up to this point, I had been… 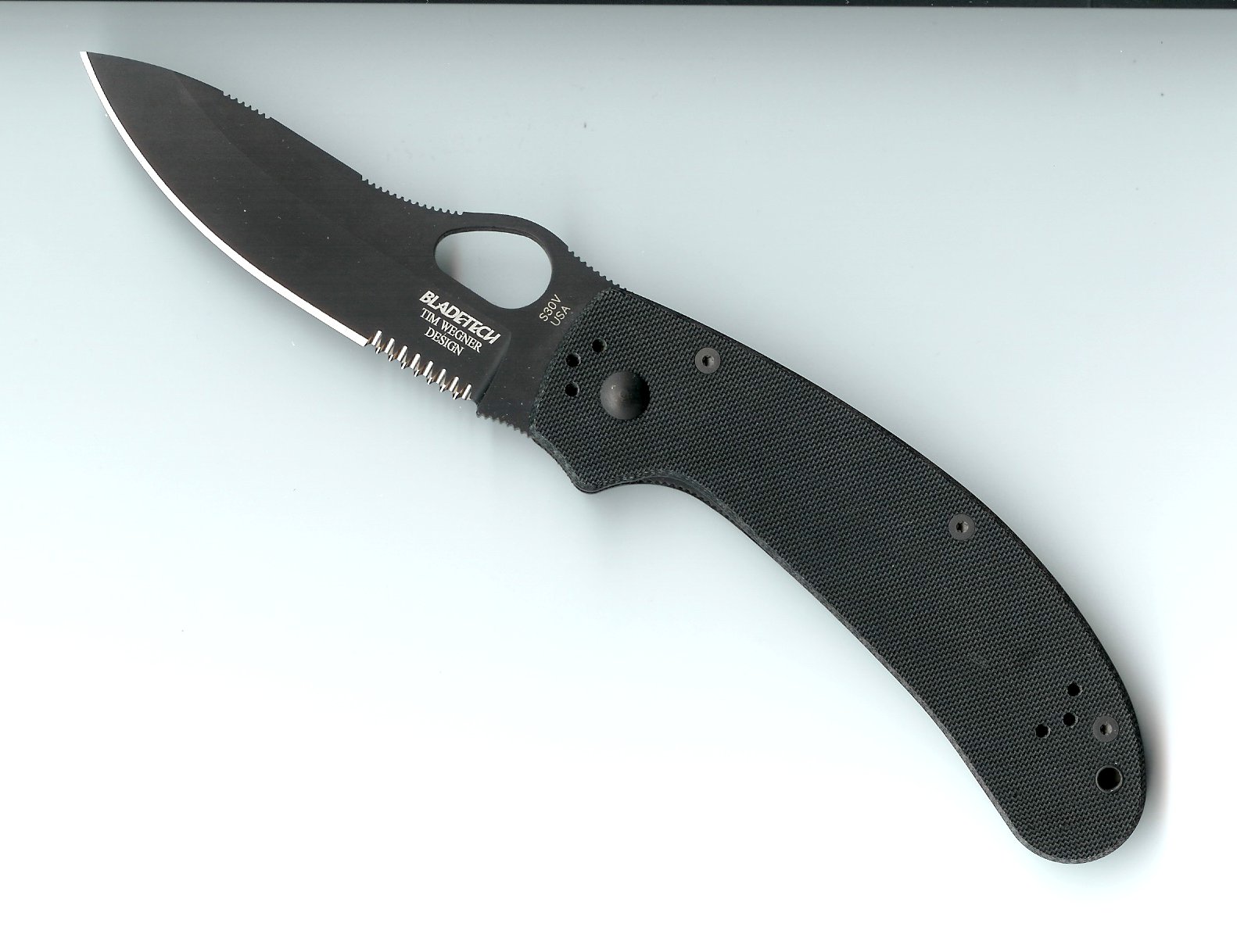 carrying an Emerson Commander (black blade with combo-serrated edge), which I still enjoy carrying from time to time. However, since that day, this has changed. The Blade-Tech/Wegner Professional Hunter Extreme is now my daily carry knife/tactical folder. This is for a number of reasons. First, it’s a little bit lighter and more compact (length and width) than my Emerson Commander. The small difference in blade size and overall weight just makes the Blade-Tech/Wegner Pro Hunter Extreme a little easier to carry. Secondly, the Blade-Tech/Wegner’s blade is perfectly shaped for performing most of the tasks I use it for on a daily basis–opening boxes, cutting those strong plastic packing ties, cutting product packaging open, etc.

As utilitarian as the Blade-Tech/Wegner Pro Hunter Extreme’s blade is, however, it still has a good tactical look to it, and will no-doubt serve well for tactical application–especially with its extra-large Spyderco-type opening hole which allows for fast opening, even without resorting to flicking/snapping the blade out via wrist action. This jumbo Spyderco-type hole at least partially compensates for the loss my Emerson Commander’s "wave" fast-opening feature, regarding blade deployment speed–although nothing else is as fast as the "wave". When you open Professional Hunter Extreme, the blade clicks open with a positive "click", as the liner lock snaps into position behind the very sharp S30V steel blade. The Blade-Tech/Wegner’s carry clip, as it comes from the factory also positions the knife blade-point-down in the pocket, as opposed to the Emerson’s clip, which positions the Commander’s blade point-up. However this is reversible (the user can change this, and position the clip for point-up carry in the pocket).  The blade has an excellent tactical-application profile/shape and tactical-appropriate length (3 5/8"). 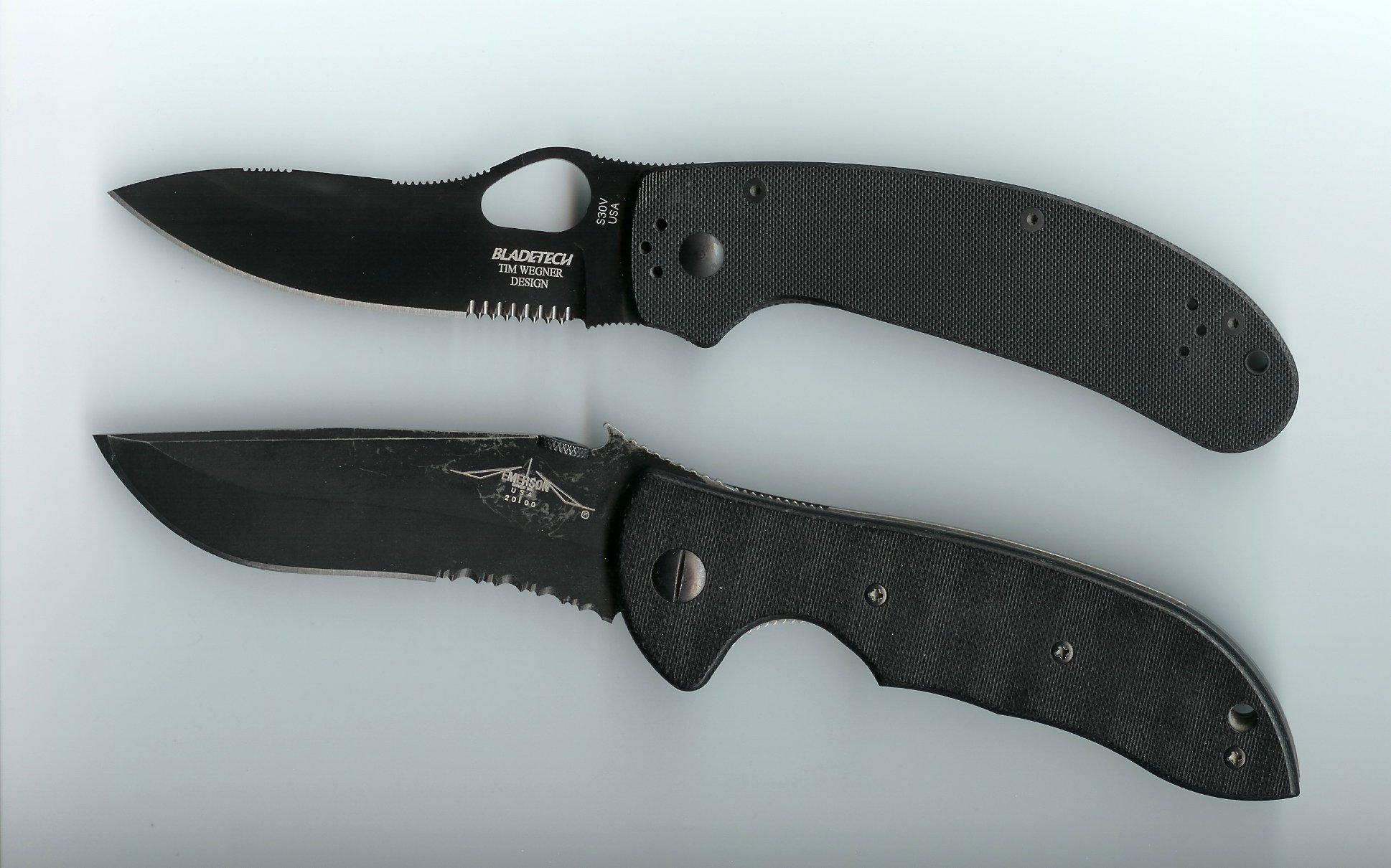 A quick note on this: Blade-point-down positioning in the pocket and Spyderco hole vs. wave means the Blade-Tech/Wegner Pro Hunter takes slightly longer to open on a quick draw from the pocket, even if both knives are just flicked out/snapped out via wrist action. However, I’ve also found point down position and no wave aspect a little safer with regard to sticking my hand quickly into my pocket to draw the knife. When my Commander’s blade tension screw (which controls the force it takes to open the knife) loosens a little bit with use (and I forget to tighten it back up), the blade will open too easily and will even partially open inside the pocket, on occasion. If/when this happens, the user has a partially-opened (and very sharp) blade situated point up in the pocket, with the blade edge also exposed and situated diagonally/vertically. So, when the user sticks his/her hand in. He/she will either stab or slice his/her fingers when he/she puts his/her hand in with any kind of speed or force and without being careful. Yes, this has happened to me. Chalk it up to DFU error (Dumb Freakin’ User). Luckily, I’ve never cut myself that badly.

Anyway, this is why it’s so important to keep the proper amount of opening tension on any tactical folder that is carried point up in the pocket, especially any knife that features a wave opening feature. The wave, due to it’s shape, can catch on either the inside of the pocket or an object in the pocket and open the knife, if the tension screw hasn’t been properly tightened. This isn’t a design flaw, but rather user error. It’s the user’s responsibility to keep the proper amount of tension on the blade, regarding that screw. Emerson probably prefers to situate/position the carry clip for point-up carry in the pocket in order to provide for the greatest speed in drawing and opening the knife. Just be aware of this aspect, if you carry a knife with the Emerson wave. It’s a great feature to have on the knife, provided the user is responsible and keeps proper tension on that screw. 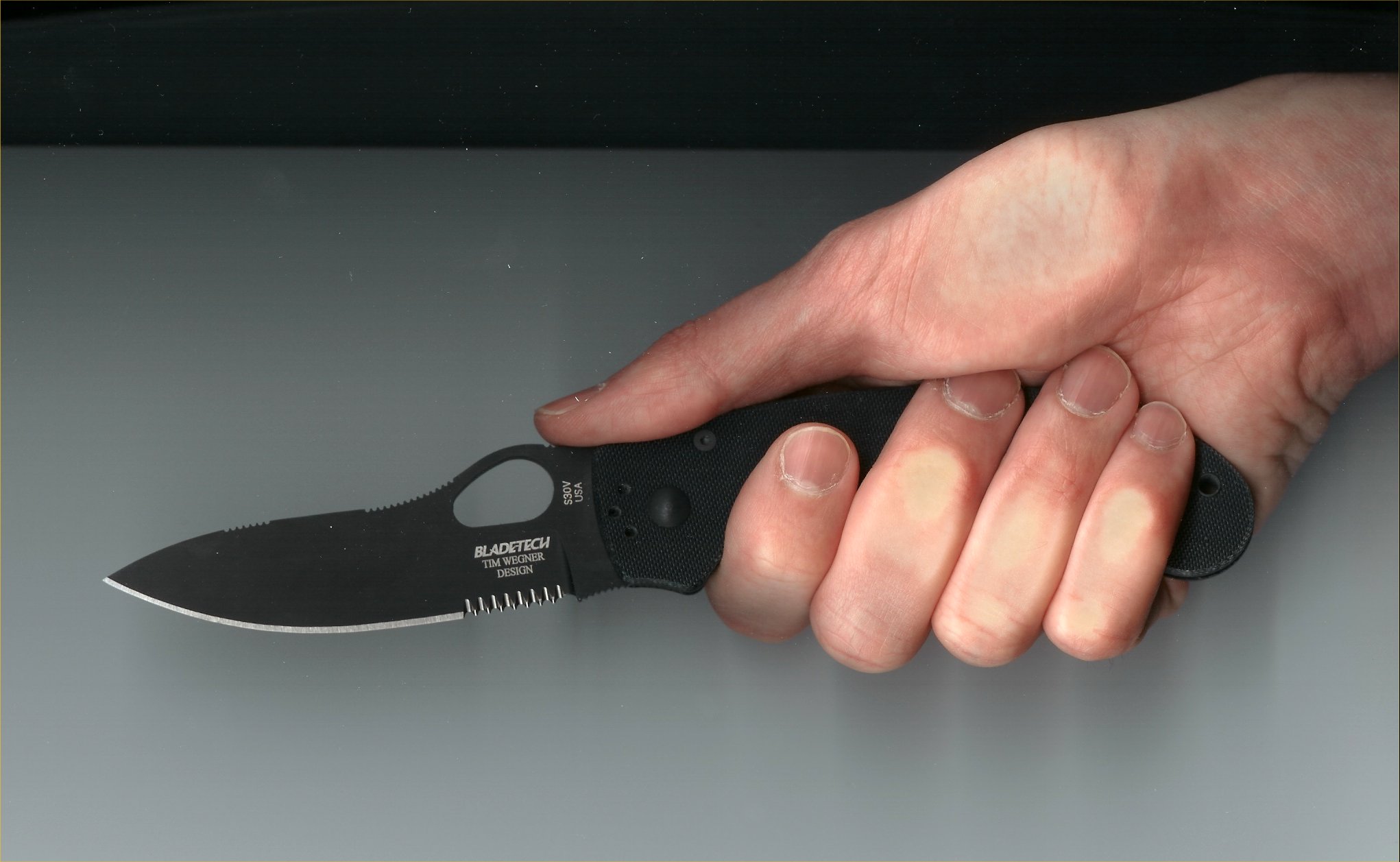 Understand that I’ve owned and carried some of the best production tactical folders out there, including but not limited to the Emerson Commander, Emerson CQC8/Banana Knife (arguably the coolest and best-designed pure fighting tactical folder), Spyderco Military, etc. Basically, the Blade-Tech/Wegner Professional Hunter Extreme is just a fabulous tactical carry and all-around utility knife, period. If I sound like I’m gushing about this product, you’re right. What can I say? It’s a great product. If you’re looking for the ideal production tactical folder for everyday carry and use, you’d be hard pressed to find a better or more enjoyable example than the Professional Hunter Extreme.

Druthers:  If I could modify anything on the Professional Hunter Extreme, I might want to elongate the serrated portion of the combo-edge blade, and make the serrations more Spyderco-like (variable geometry–variable length, width, and angulation).  I would also like to see a version of the knife with either full (variable-geometry/Spyderco-type) serrations or serrations up to about a quarter-inch to a half-inch from the tip/point.  Also, it would be interesting to see an non-magnetic, all-titanium-bladed version with a carbide-coated edge.  That’s about it, though. 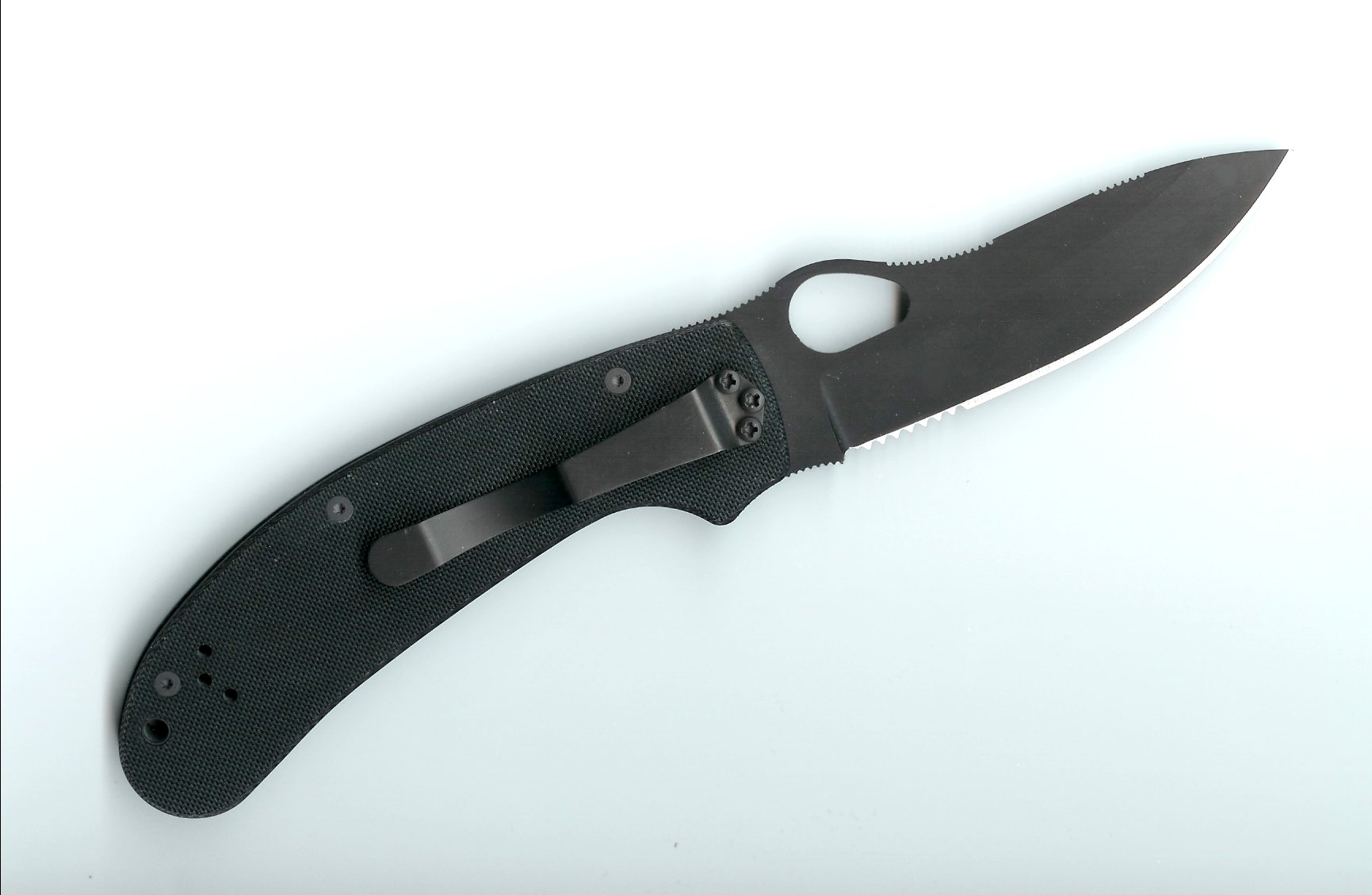 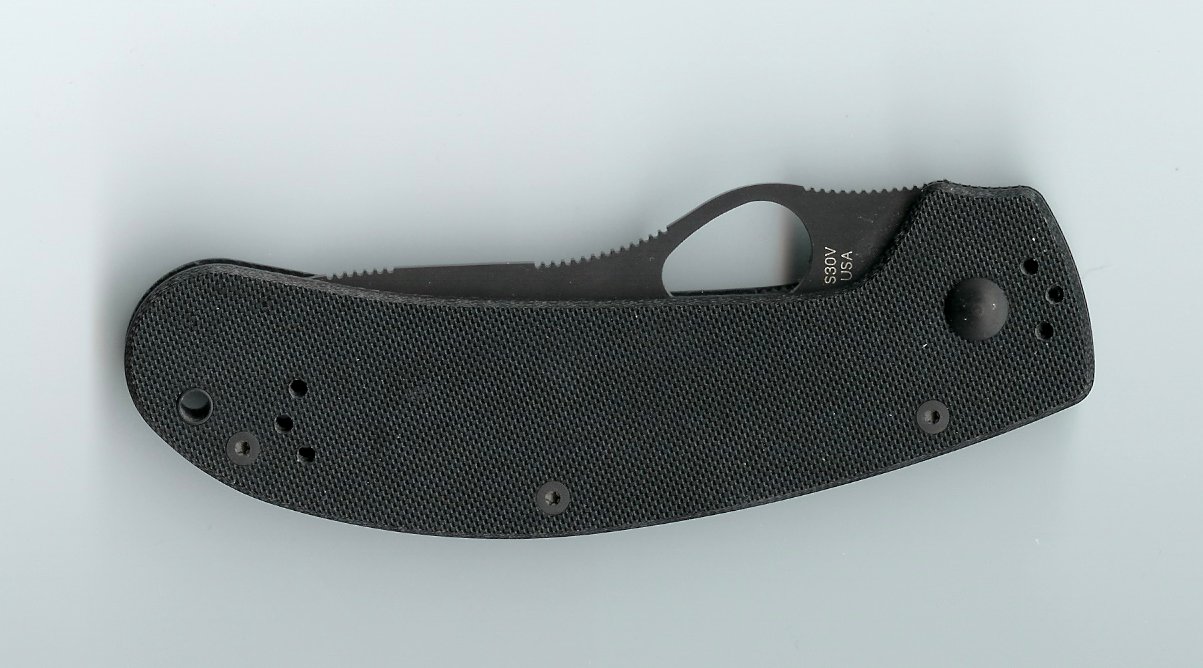 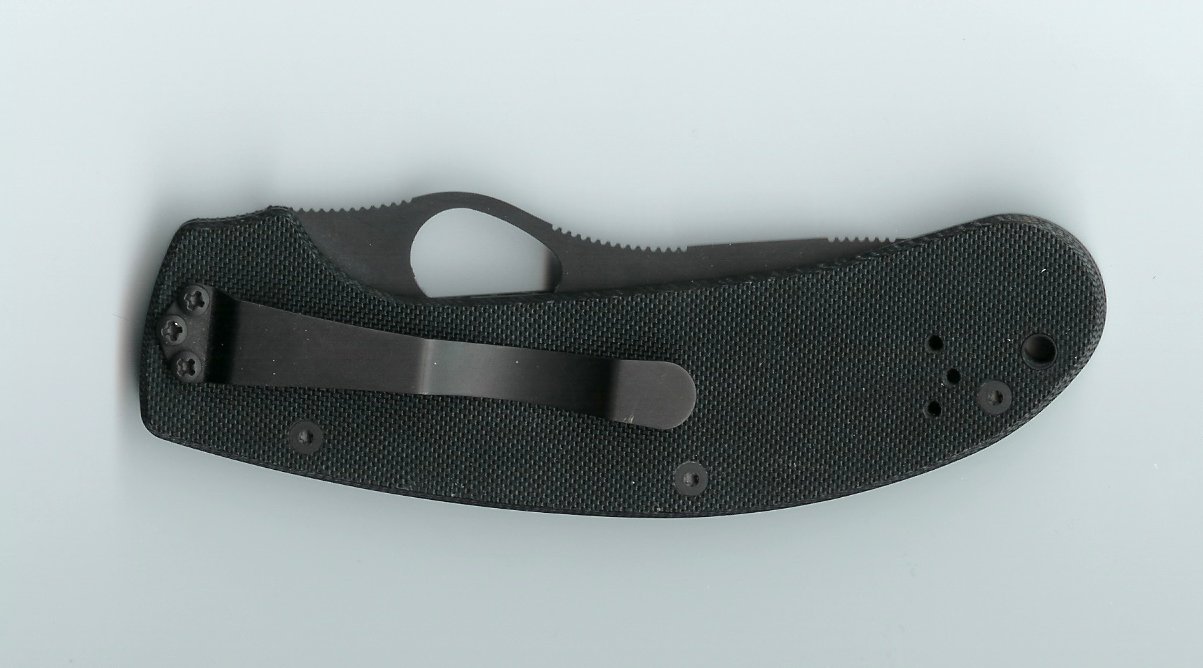 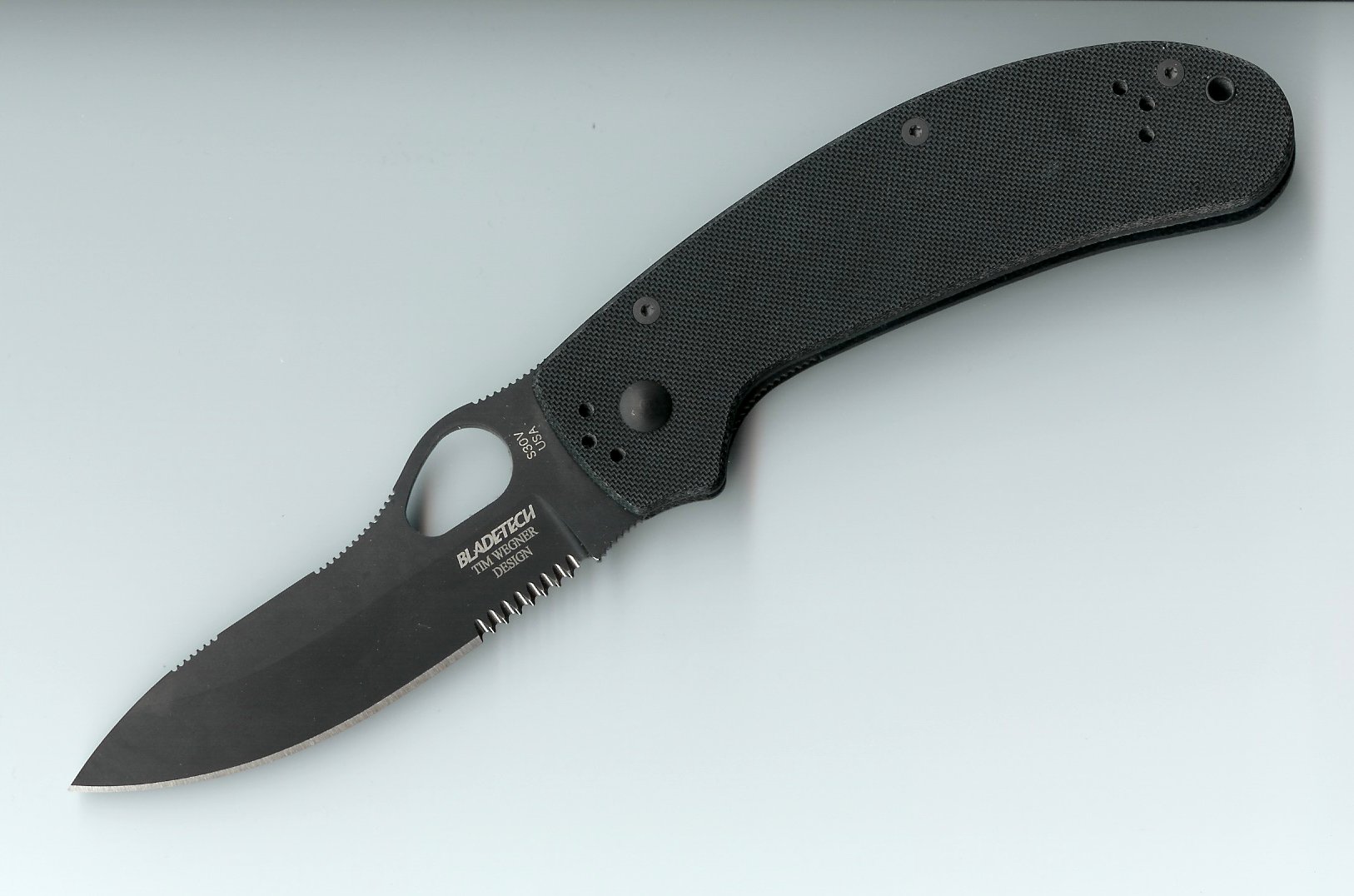 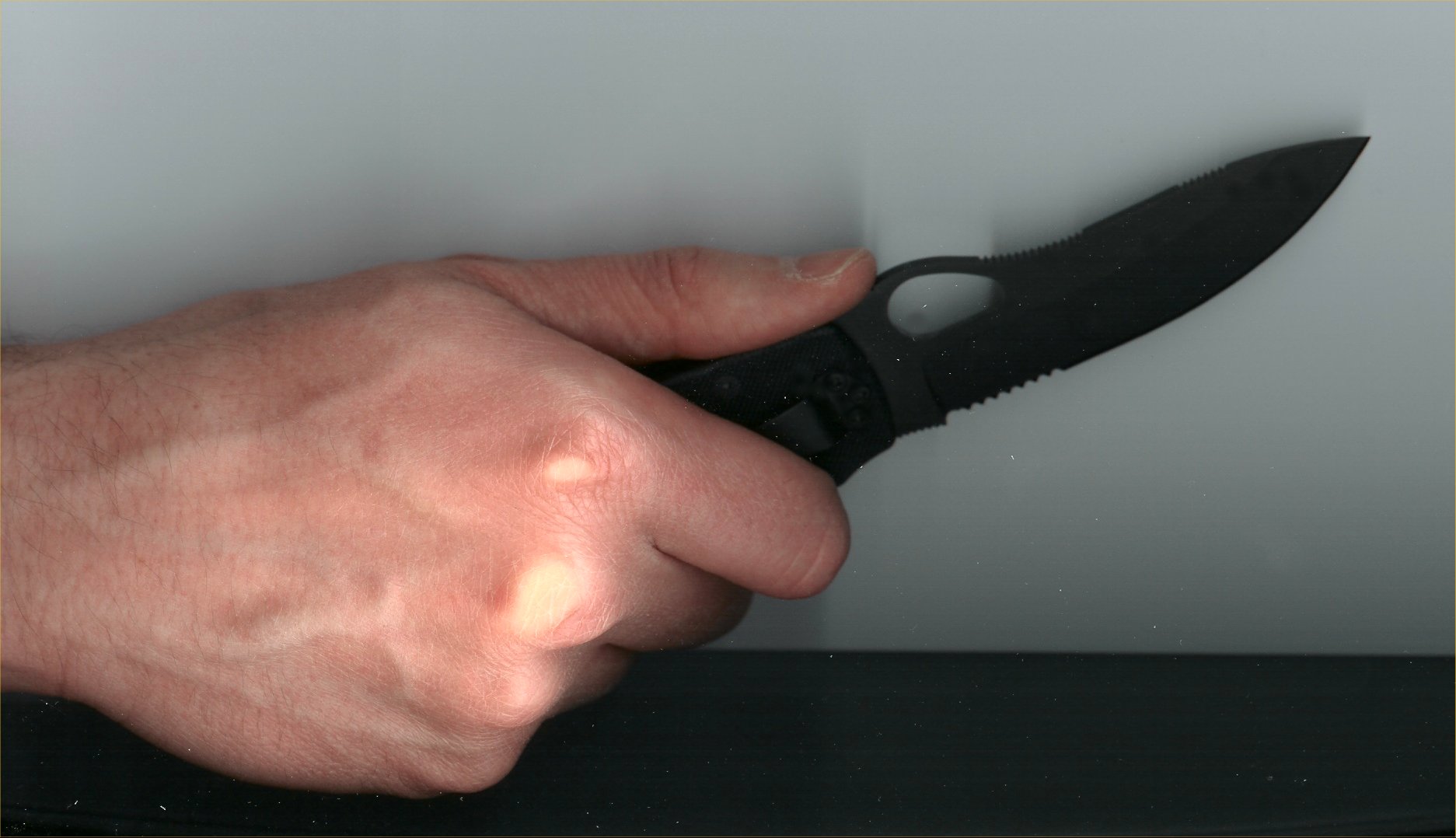 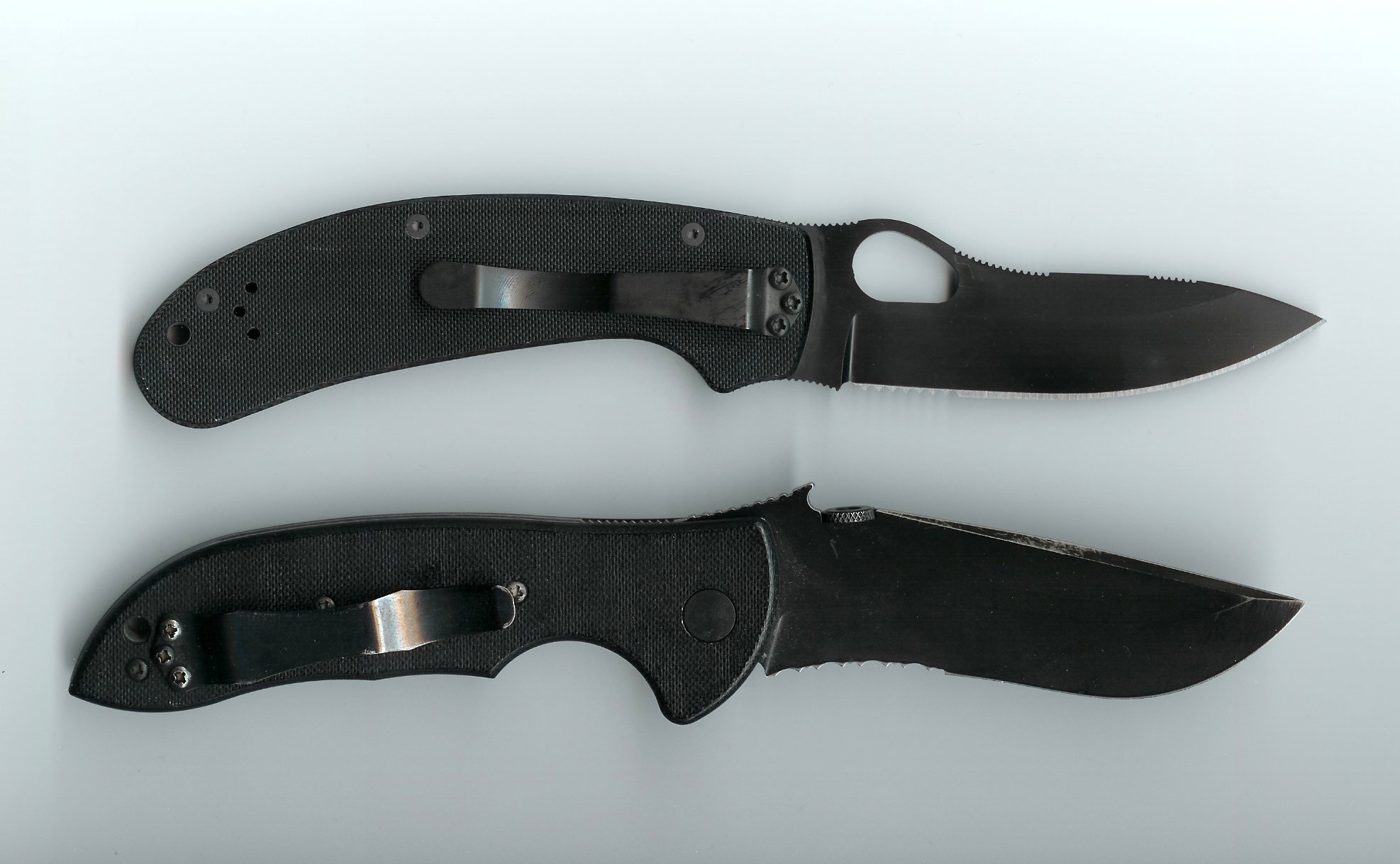 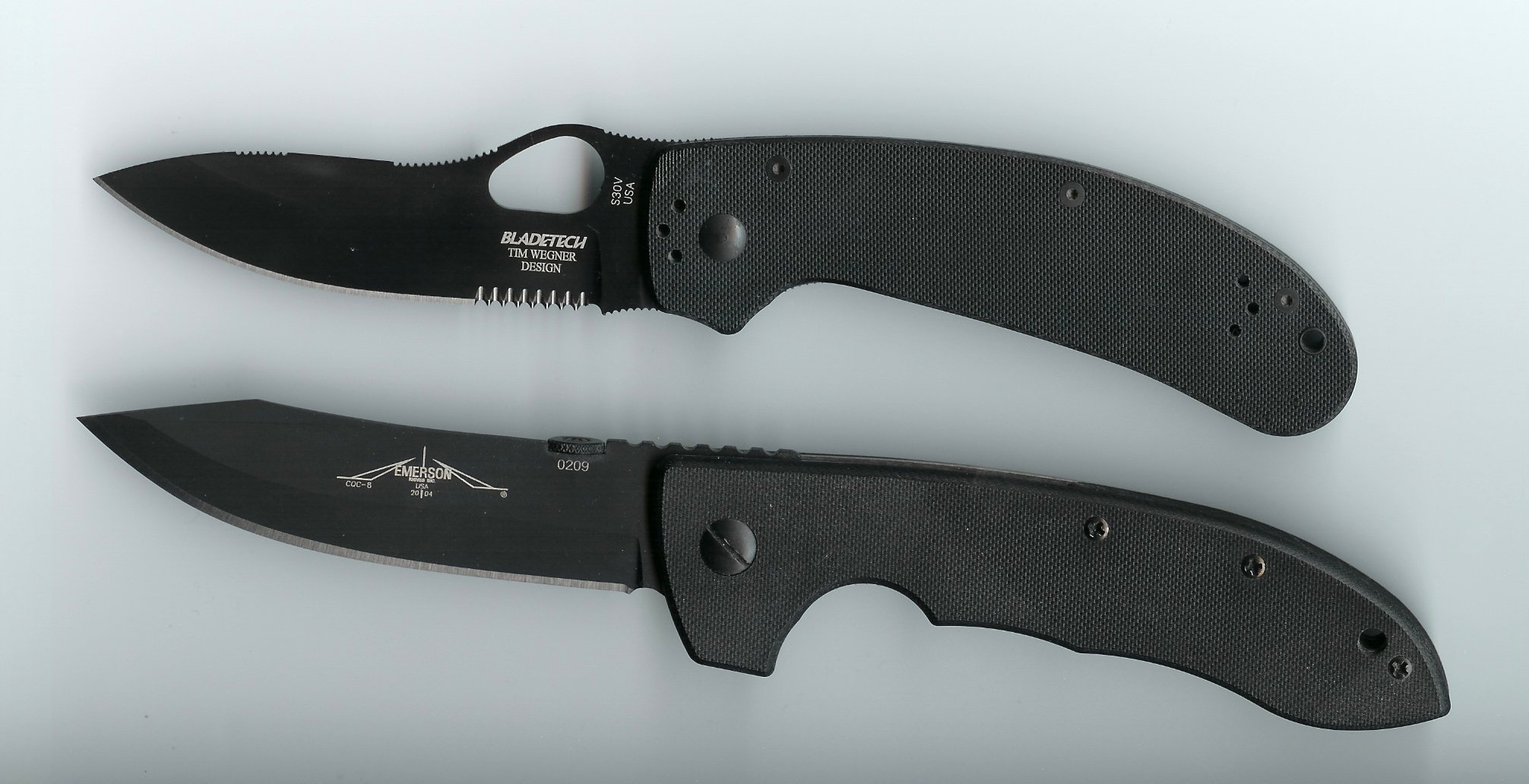 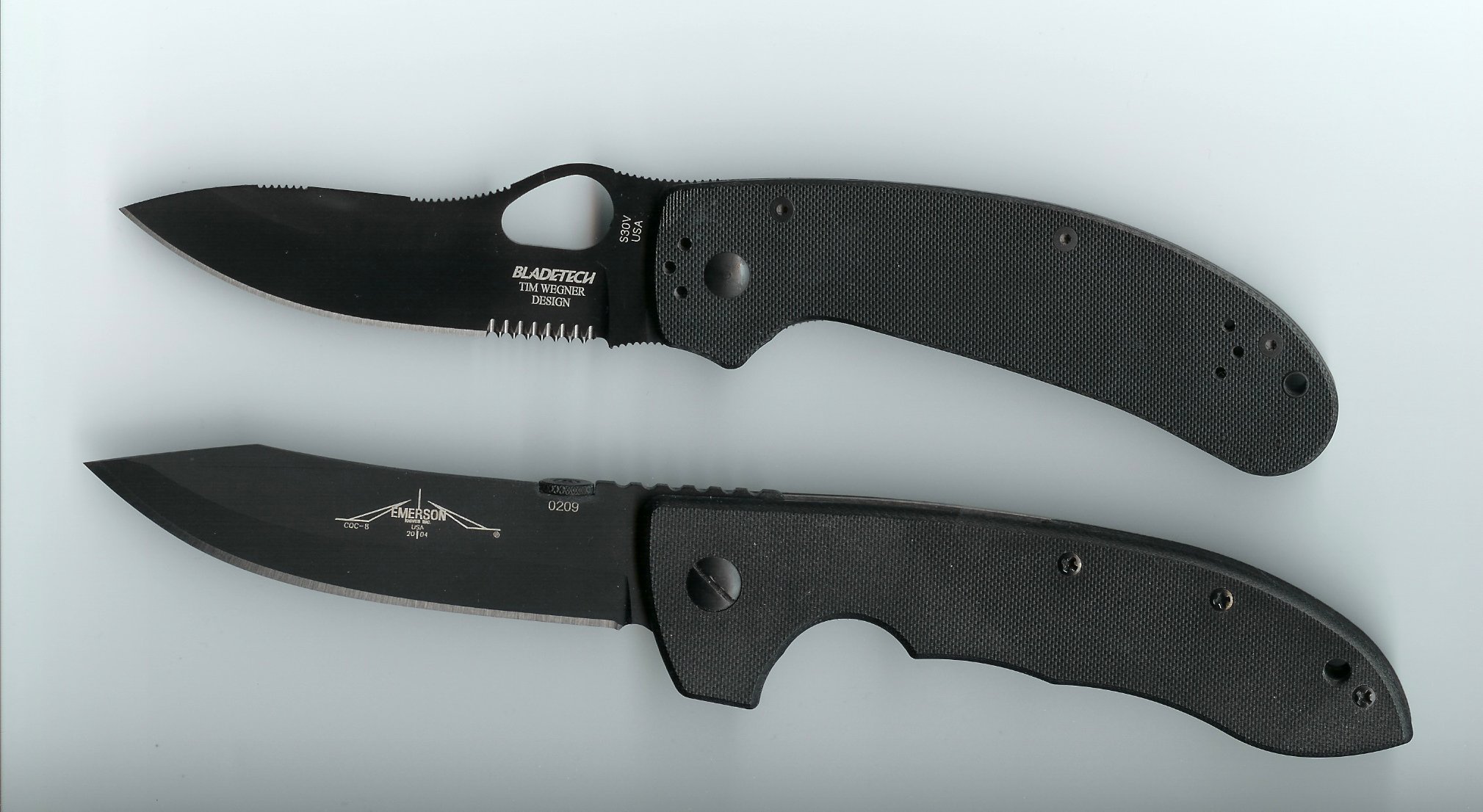 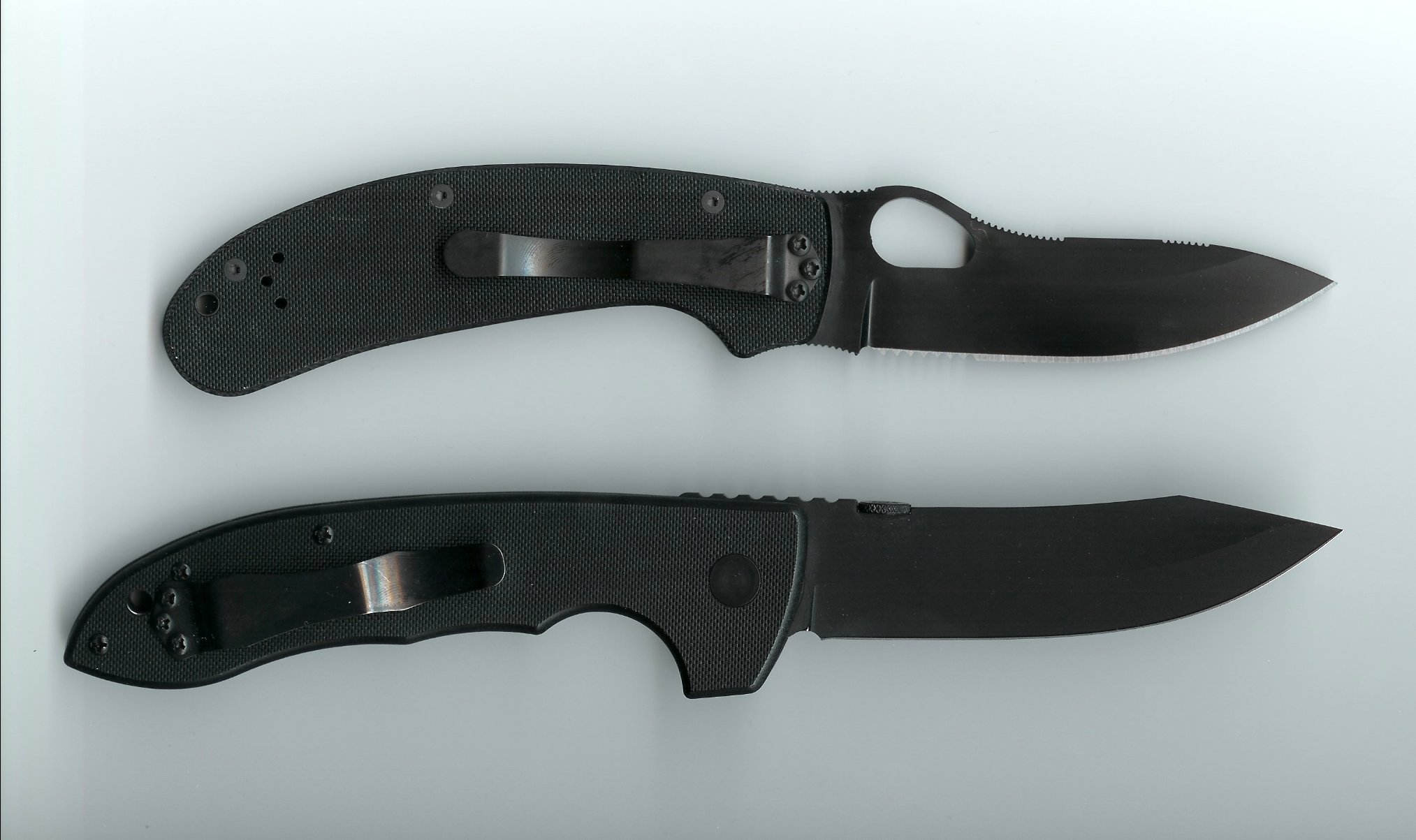 David Crane started publishing online in 2001. Since that time, governments, military organizations, Special Operators (i.e. professional trigger pullers), agencies, and civilian tactical shooters the world over have come to depend on Defense Review as the authoritative source of news and information on "the latest and greatest" in the field of military defense and tactical technology and hardware, including tactical firearms, ammunition, equipment, gear, and training.
Previous Australian ‘Off-Axis View Device’ for Shooting Your Rifle/Carbine Around Corners
Next Auto Assault-12 (AA-12) Full-Auto Machine Shotgun/FRAG-12 High-Explosive Round Combo/Weapon System!