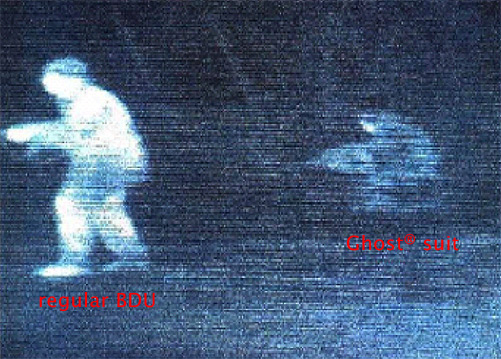 The clothing product is called “Ghost“, and the camo netting material is called Spectralflage. Catchy names.

A person wearing Ghost® shows reduced infrared emissions and thus a lower radiant temperature. The infrared pictures appear scattered and detection as a human being can be successfully avoided. Significant signature reduction is provided in the UV, NIR and TIR (3-5 µm / 8-12 µm) ranges. In the visual range Ghost® is also highly effective. Coming in various camouflage prints, it can be adapted to all types of countryside. Various background colors with different emission factors are available. 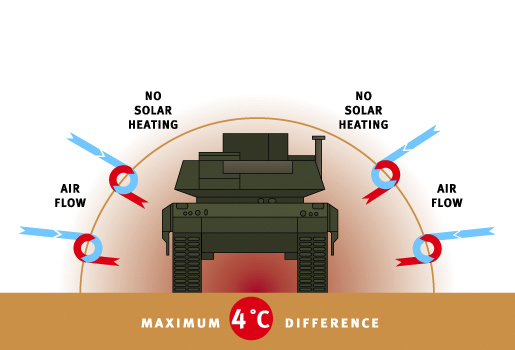 In DR’s opinion, multispectral combat camouflage technology that incorporates both anti-NV and anti-thermal/IR camo tech is necessary for future warfare in the 21st Century, particularly for military Special Operations Forces (SOF) (including snipers/long-range-interdiction specialists), as you can’t truly own the night without it. Modern military infantry combat forces can’t afford to stop at camouflage that only works in the visible light spectrum, since more and more countries and malevolent forces are acquiring both night vision and thermal/infrared imaging devices, as time marches on. 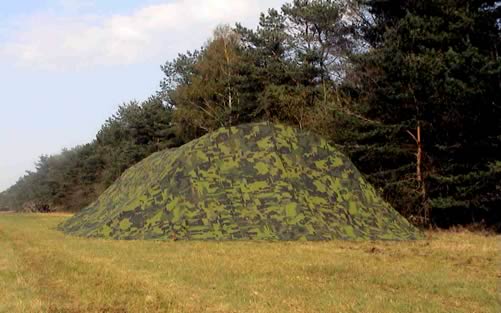 It should be noted that Blucher Systems also manufactures Saratoga CBRN protective fabric, which can be used to make military camouflage CBRN BDUs. However, we don’t know whether or not it can be integrated with the Ghost anti-thermal/IR-detection technology. Blucher Saratoga fabric is already being used for the U.S. military’s Joint Protective Aircrew Ensemble (“JPACE”) and the German Bundeswehr’s IDZ-BS CBRN BDU for their “Infantryman of the Future” program. “CBRN” stands for “Chemical, Biological, Radiological, and Nuclear”.