The Advanced Ground Mobility Vehicle (AGMV), the product of a joint venture between General Dynamics Land Systems (GDLS) Tactical Vehicles division and AM General, LLC (current manufacturer of the M1151 and M1152 up-armored HMMWV variants), was definitely one of the coolest items introduced at AUSA Winter Symposium and Exhibition 2007 in Ft. Lauderdale, FL.

Essentially a logical evolution of the Shadow RST-V (i.e. updated/uprated, or modernized and improved, version of that experimental vehicle), the AGMV is GDLS’ technology demonstrator vehicle for the Joint Light Tactical Vehicle (JLTV) program, the purpose of which is to replace all the up-armored HMMWVs (a.k.a. Humvees a.k.a. Hummers) currentely in operation. As such, the GDLS AGMV is designed from the ground up to give the crew increased survivability against land mines / IEDs (Improvised Explosive Devices) that have been the number one threat to our troops in Iraq and Stan (Afghanistan).

To accomplish this, the AGMV features a… 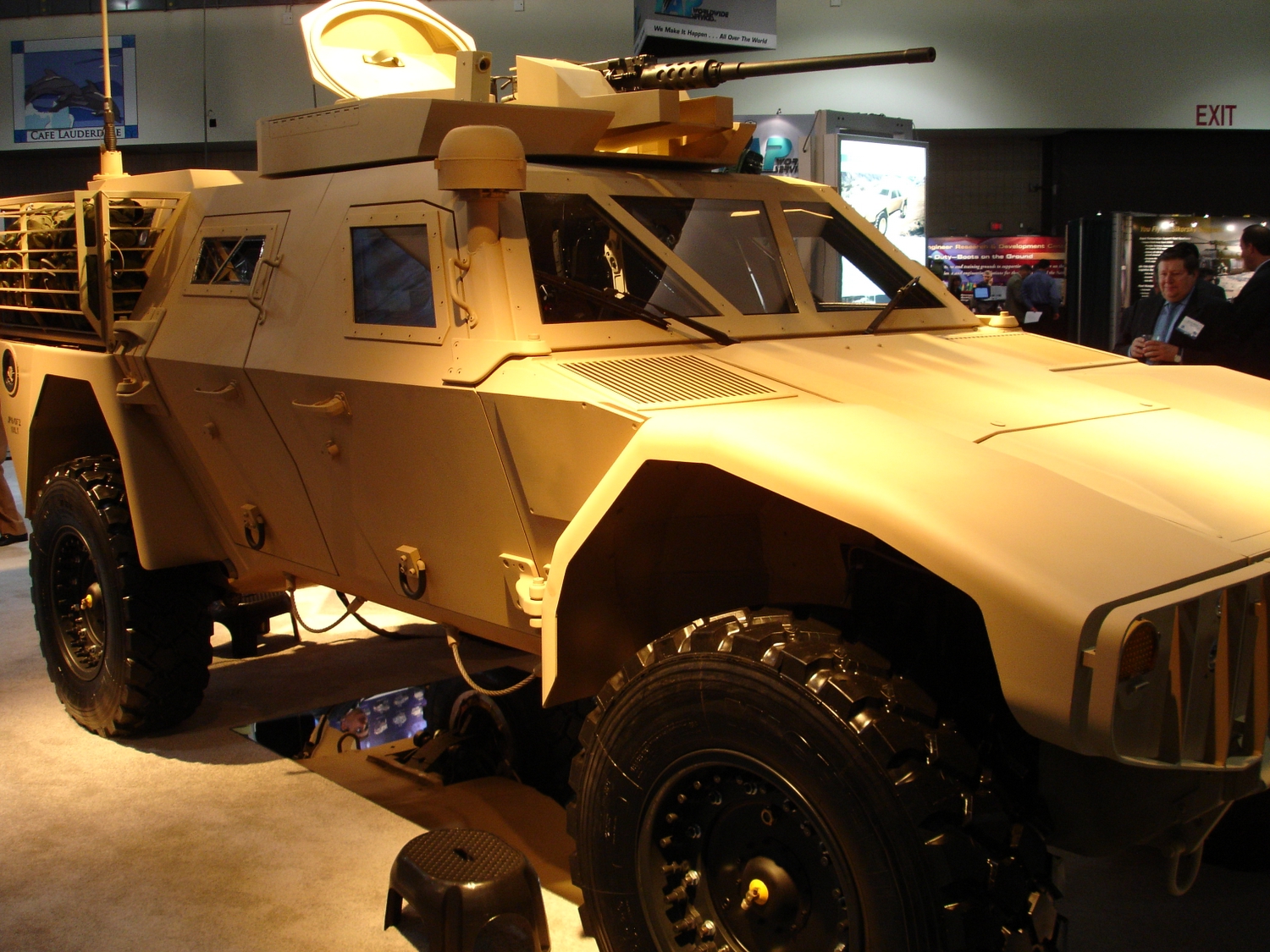 diamond-shaped, integrally-armored monocoque capsule / crew compartment that incorporates a V-hull and inward-sloped upper side wall to direct the blast from a land mine / IED (Improvised Explosive Device) up and down the sides of the vehicle, rather than directly up through the bottom, like would happen with a flat-bottomed/flat-sided up-armored Humvee (HMMWV). The other half of the diamond is the aformentioned upper portion of the AGMV armored crew capsule/compartment that slopes inward. This inward-sloping upper portion, combined with the outer-sloping V-hull lower portion, greatly attenuates/mitigates the blast impact to the vehicle and occupants inside. It will most likely also assist in increasing crew survivability against enemy small arms threats (i.e. rifle rounds).

But, that’s not all, folks. The Advanced Ground Mobility Vehicle features a futuristic in-hub electric drive system (4-wheel drive) with variable-height suspension. This means that each wheel has its own electric motor. Electric power for the in-hub electric drive system is provided by a custom high-tech 220V Lithium-ion (Li-ion) battery made by Saft (Cockeysville, MD). The Saft battery uses stored energy to provide supplemental power the the system even when the AGMV’s engine is turned off, and supports vehicle acceleration and regenerative braking. The battery also provides power for Silent Watch, exported power, and mobile applications. Of course, the AGMV also utilizes run-flat tires. 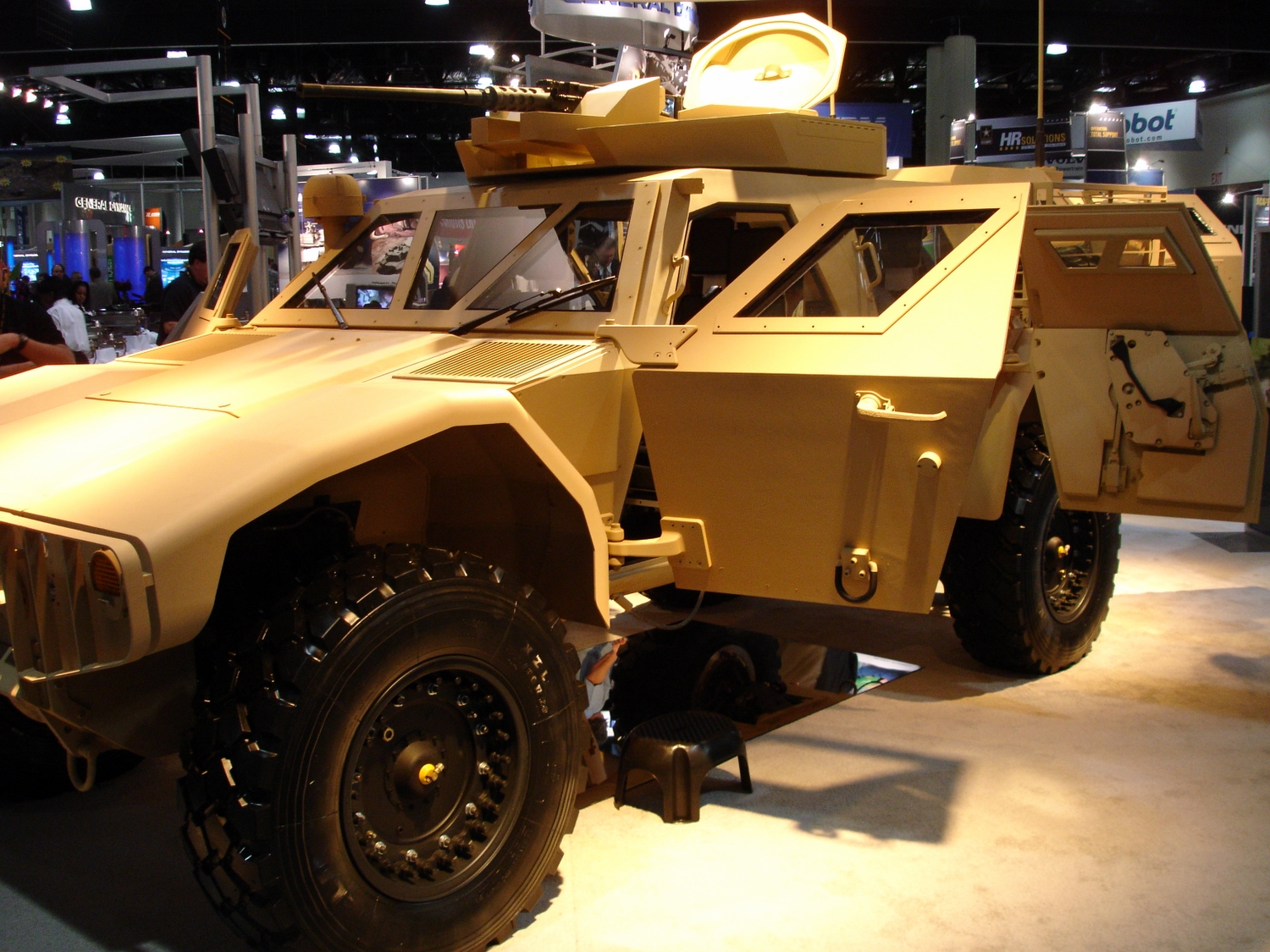 The AGMV is also modular with subsystem commonality that make it "easily adaptable to a variety of missions and results in reduced life cycle cost." GDLS also claims that the AGMV is "built around a scaelable open architecture and power baseline that is able to accommodate the integration demands of future technology growth." Try saying that fifty time in a row. Anyway, all that basically means is that the AGMV can be configured to be a tactical vehicle (a.k.a. combat vehicle), a reconnaissance vehicle (a.k.a. recon vehicle) a utilility vehicle, a command-and-control (C2) vehicle, etc., and can be outfitted with new components and electronics as technology improves and the mission requirements and combat environments change. 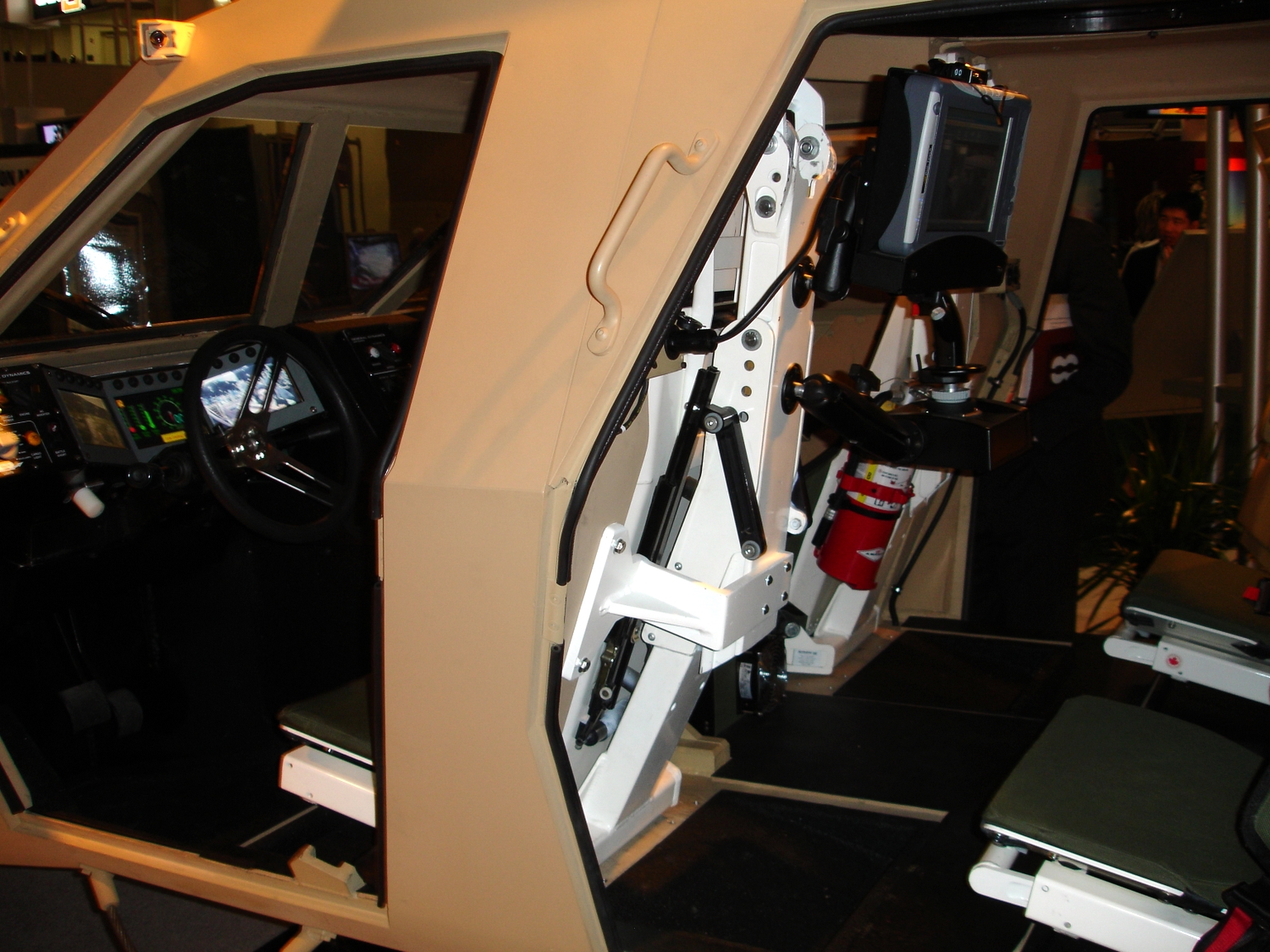 DefenseReview found the AGMV to be quite impressive in appearance. The vehicle looks good, and we hope that this is a case of form following function. We would, of course, have greatly preferred to test-drive the vehicle, but that wasn’t possible. We did, however, get to sit inside it and move about the cabin. The seats in the AGMV are suspended to further protect the vehicle from mine/IED blasts from underneath. The driver’s area is outfitted with digital speedometer and gauges (fuel, temperature, etc.) and right and left view screens connected to rear-looking cameras, which replace the old rear-view mirror. The passenger/navigator gets a tablet-type computer to assist with navigation.

The gunner sits on the left side behind the driver, and has a video screen (with targeting reticle) and stick-controller for the roof-mounted remote weapons station (RWS).

Time will tell whether or not the Advanced Ground Mobility Vehicle (AGMV) technology demonstration vehicle ends up landing a JLTV contract. However, right now, it’s got as good a chance as any, and probably better than most, considering the companies behind it (GDLS and AM General), both of which are highly established players and highly experienced in the DoD / U.S. Army contracting/procurement game.

By the way, the name of the new GDLS/AM General joint venture company behind the AGMV and any/all other JLTV-program-related projects engaged in by the two companies is called General Tactical Vehicles. 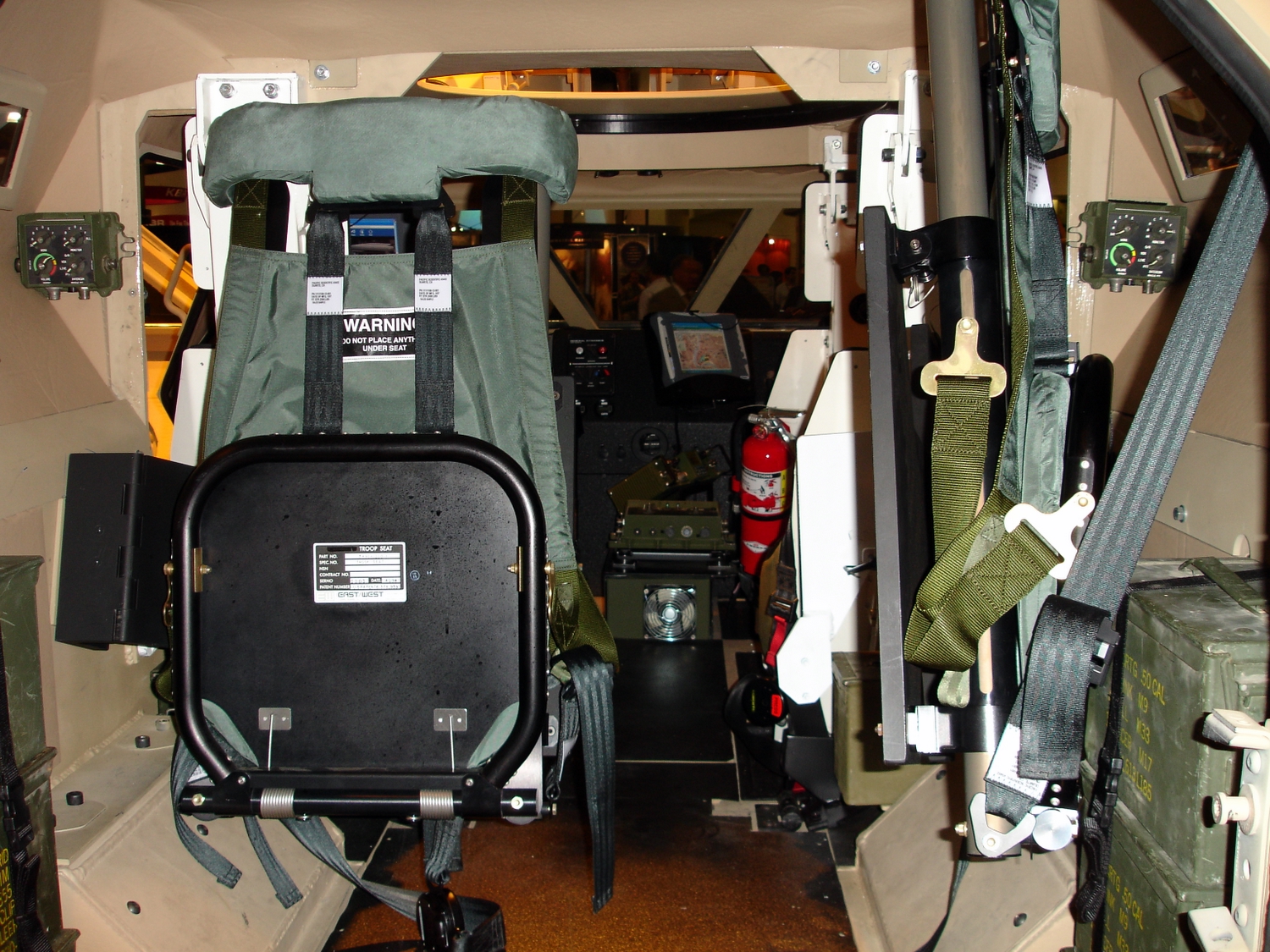 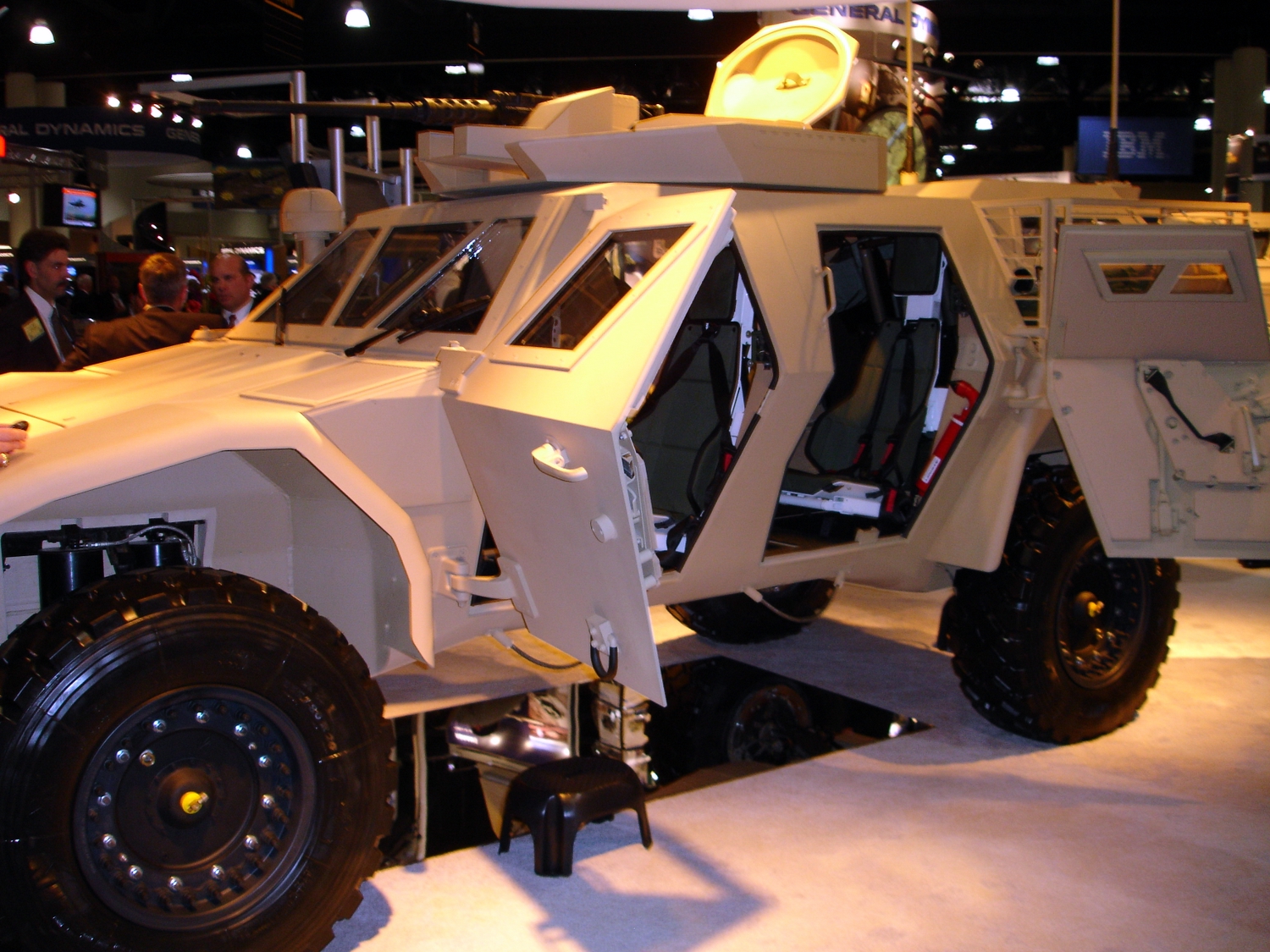 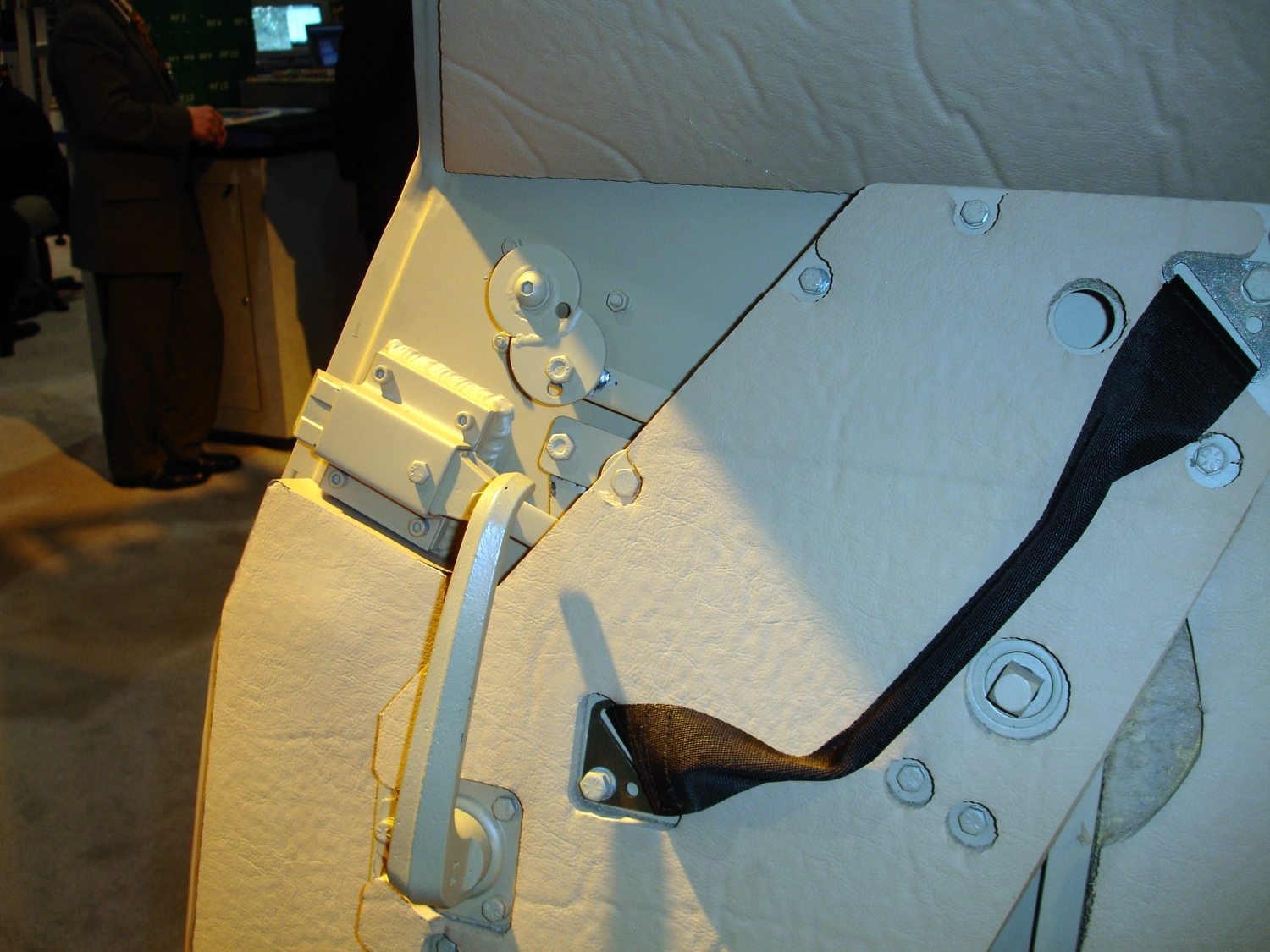 David Crane started publishing online in 2001. Since that time, governments, military organizations, Special Operators (i.e. professional trigger pullers), agencies, and civilian tactical shooters the world over have come to depend on Defense Review as the authoritative source of news and information on "the latest and greatest" in the field of military defense and tactical technology and hardware, including tactical firearms, ammunition, equipment, gear, and training.
Previous Negotiator Tactical Robot: Encrypted Long-Range Video for Tactical Ops
Next DefRev First Look: BAE Systems RG33 Series MRAP Vehicles