Back in February, DefenseReview published a short blurb on an interesting new tactical small arm that MagPul Military Industries Corp. (a.k.a. MagPul Industries Corp.) is developing. Since we were sworn to secrecy by the folks at MagPul, we couldn’t tell our readers anything about it other than that we had seen it. That article caused a lot of speculation on various firearms-related forum sites/boards. Some speculated that we were referring to the TDI KRISS Super-V XSMG .45 ACP submachine gun that MagPul Design Group helped develop (you know who you are). We weren’t.

Anybody who’s read Defense Review in the last few months would have known that we had already covered the latest developmental version of the KRISS Super-V XSMG subgun after we saw and handled it at SHOT Show 2007. In fact, a simple search for the KRISS (using the search box at the top of this site) would have answered that question. In other words, those folks (speculators) should have known better–or at least done their homework. One of our jobs here at DefRev is to…

know about (and report on, of course) the "latest and greatest" advanced tactical weapons, equipment, gear, training, etc. before you (or they) do. That’s just one of the many things we do, here. Now, we don’t always have time to report about it right away (as soon as we find out about it), nor do we always have permission to write about it right away. We often have to sit on information that we receive do to its confidential nature and often by specific request by manufacturers that we not write about it. This new, "secret" MagPul weapon is one of those situations.

Well, while we were at the recent 2007 NDIA Joint Services Small Arms Systems Annual Symposium, Exhibition & Firing Demonstration, a.k.a. NDIA Small Arms Symposium 2007, MagPul CEO Rich Fitzpatrick and the gang cleared us to photograph and publish information on the new weapon.

So, here it is, and it’s a DefenseReview.com exlusive–you’re reading it here, first, folks:

MagPul is currently in the process of developing a 5.56x45mm NATO/.223 Rem. NATO (5.56mm NATO) bullpup PDW (Personal Defense Weapon)-sized subcarbine/SBR (Short Barreled Rifle) called the "PDR", which stands for "Personal Defense Rifle". The MagPul PDR(TM) is approximately the same size as an FN P90 PDW, yet surprisingly lighter in weight, without resorting to a proprietary sub-5.56mm PDW caliber like the 5.7x28mm cartridge developed by FNH (FN Herstal) for the P90 PDW or 4.6x30mm cartridge developed by Heckler and Koch (HK) for the MP7A1 PDW. 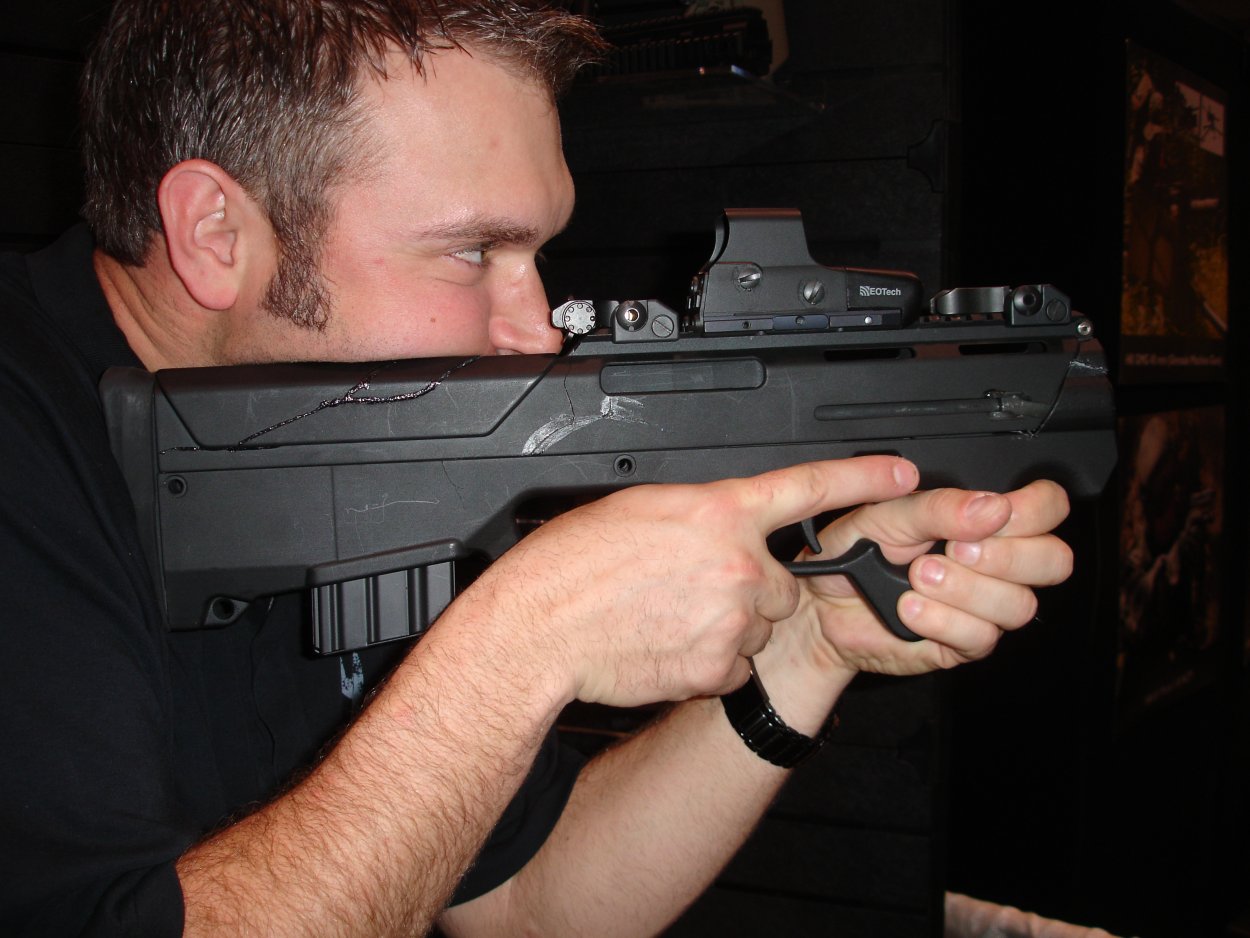 In fact, that’s the whole idea behind the MagPul Personal Defense Rifle (PDR)–give the warfighter a lightweight 5.56mm NATO weapon in a compact PDW-sized package. Since it doesn’t require special ammo (i.e. a proprietary cartridge), there are no ammo supply and procurement difficulties, other than the occasional shortfalls of 5.56mm NATO ammo supply, due to inadequate U.S. ammo production capability in the face of an ongoing war (Iraq and Afghanistan).

DefenseReview got to view and handle (and photograph) a MagPul PDR (TM) non-functional prototype mockup at the MagPul booth at NDIA Small Arms Symposium 2007. The version we handled utilized a P90-like receiver (with regard to physical appearance), except the PDR will utilize box magazines. In fact, Drake Clark, MagPul’s PR officer, has informed me that the PDR will be able to utilize standard 20 and 30-round NATO 4179 STANAG USGI AR-15/M16 box mags as well. Mr. Clark also showed Defense Review a prototype molding for a different configuration that incorporates a more conventional (and U.S. military-preferred) vertical foregrip. DefenseReview prefers this vertical foregrip setup/config at present (at least until we test fire both versions side by side, when/if functional prototypes become available to us). The MagPul Personal Defense Rifle is an interesting concept, and we look forward to seeing how the functional PDR prototype performs.

The PDR (TM) is slated to incorporate polygonal rifling, which increases bullet velocity over traditional rifling by creating a better gas seal around/behind the bullet, and allowing less gas to escape around the bullet as the round is fired. Heckler & Koch (HK) and Glock have helped to make this type of rifling popular and prove the concept. 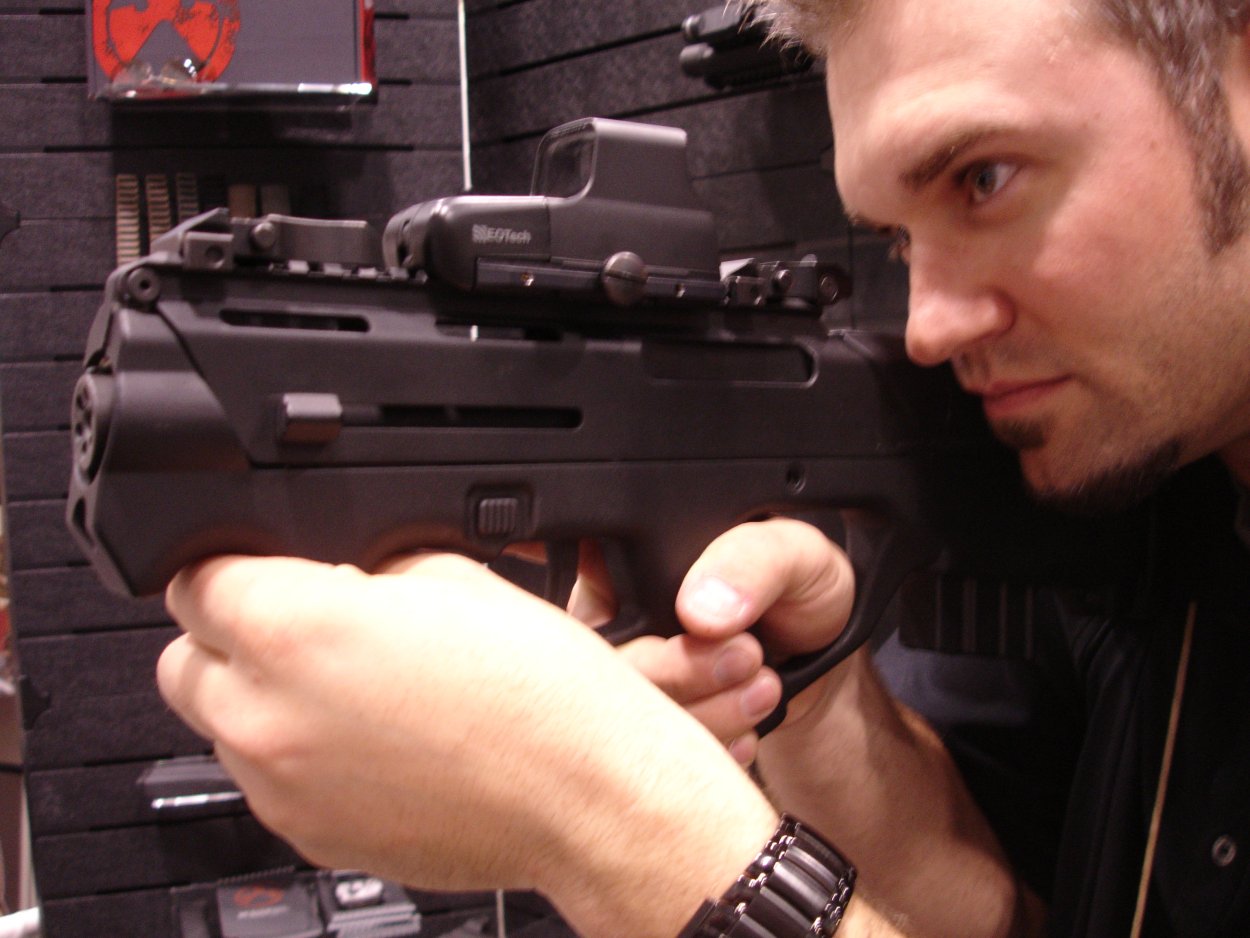 Defense Review is particularly interested to find out how controllable the weapon is in full-auto. Since th PDR has a projected weight of 3-4 lbs (approx.), full-auto controllability is likely to be an issue unless some kind of recoil attenuation/mitigation system is utilized. The MagPul team might also consider some type of mechanical or hydraulic rate reduction system to reduce the weapon’s cyclic rate/rate of fire (ROF) to the 500-650 rpm range, if the PDR’s natural cyclic rate is higher (unknown). A recoil mitigation system, combined with a cyclic rate reducer, should do the trick, provided that doesn’t increase the weapons overall weight by too much or reduce the weapon’s reliability or durability.

Mr. Sullivan designed and developed the Ultimax 100 5.56 LMG/SAW (Light Machine Gun/Squad Automatic Weapon), which is the lightest and best 5.56mm NATO LMG/SAW in the world, today, and has been ever since it’s initial introduction (in 1982, if I’m correct). That’s right, the Ultimax, which proved that a lightweight machine gun could outhit a significantly heavier machine gun (in the same caliber) on full-auto, is approx. 25 years old, and it will "house" (i.e. significantly outperform) the FN M249 SAW and it’s derivatives (i.e. the FN MK46 MOD 1) in pretty much every infantry combat-relevant area, including reliability and durability in adverse conditions under high round count, controllability on full-auto (which yields more hits on moving targets that are shooting back at you), reloading speed, weight, etc. Development actually began on the Ultimax 100 in 1978.

In any case, the MagPul PDR is indeed interesting, and we look forward to running one at the range when/if it’s introduced.

Compact Personal Defense Weapon for use in vehicle cabs and tight spaces. Will serve as single-solution replacement for standard issue M9 (pistol) and M4 (carbine) weapons. 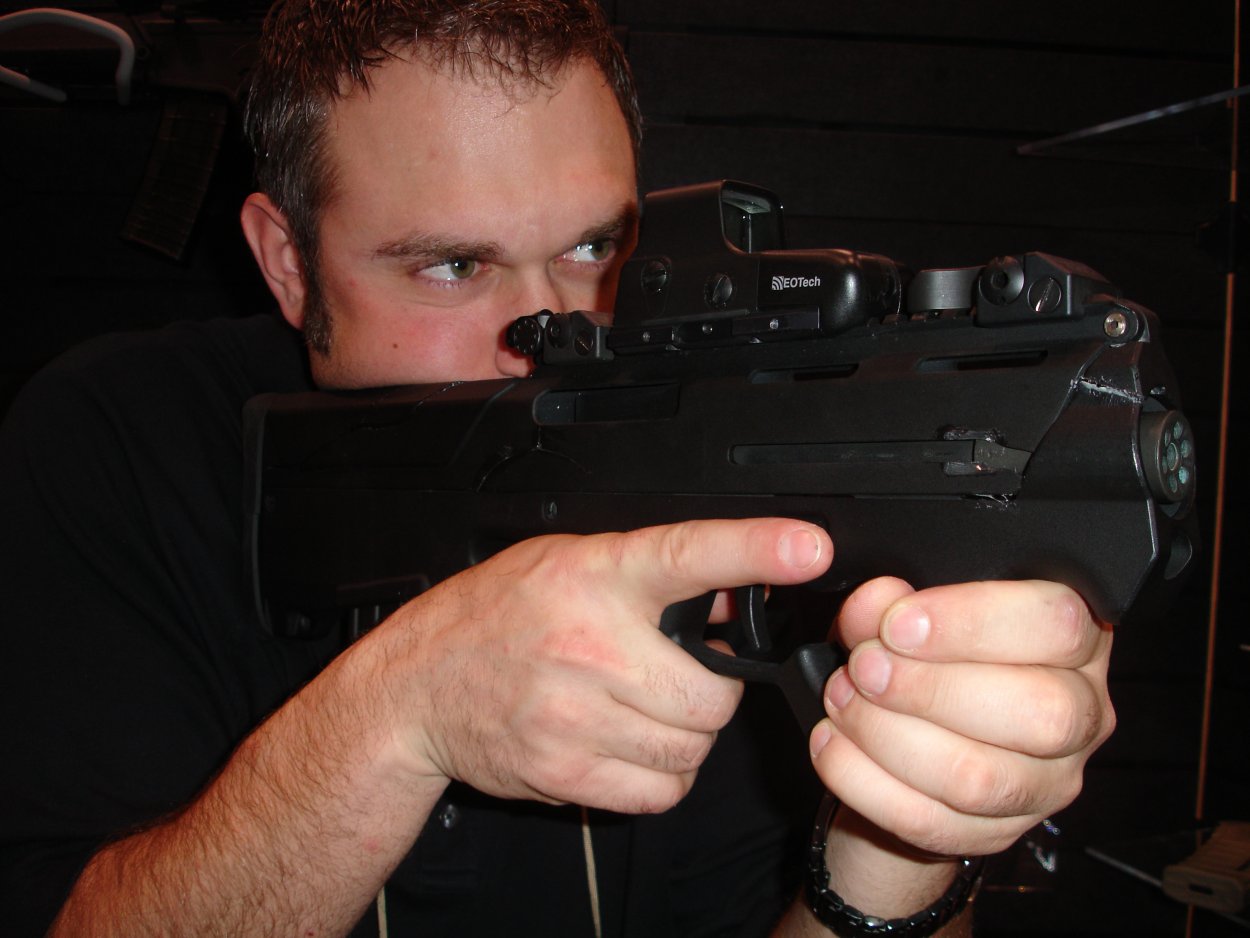 – Polymer where possible (for min. weight and temp) 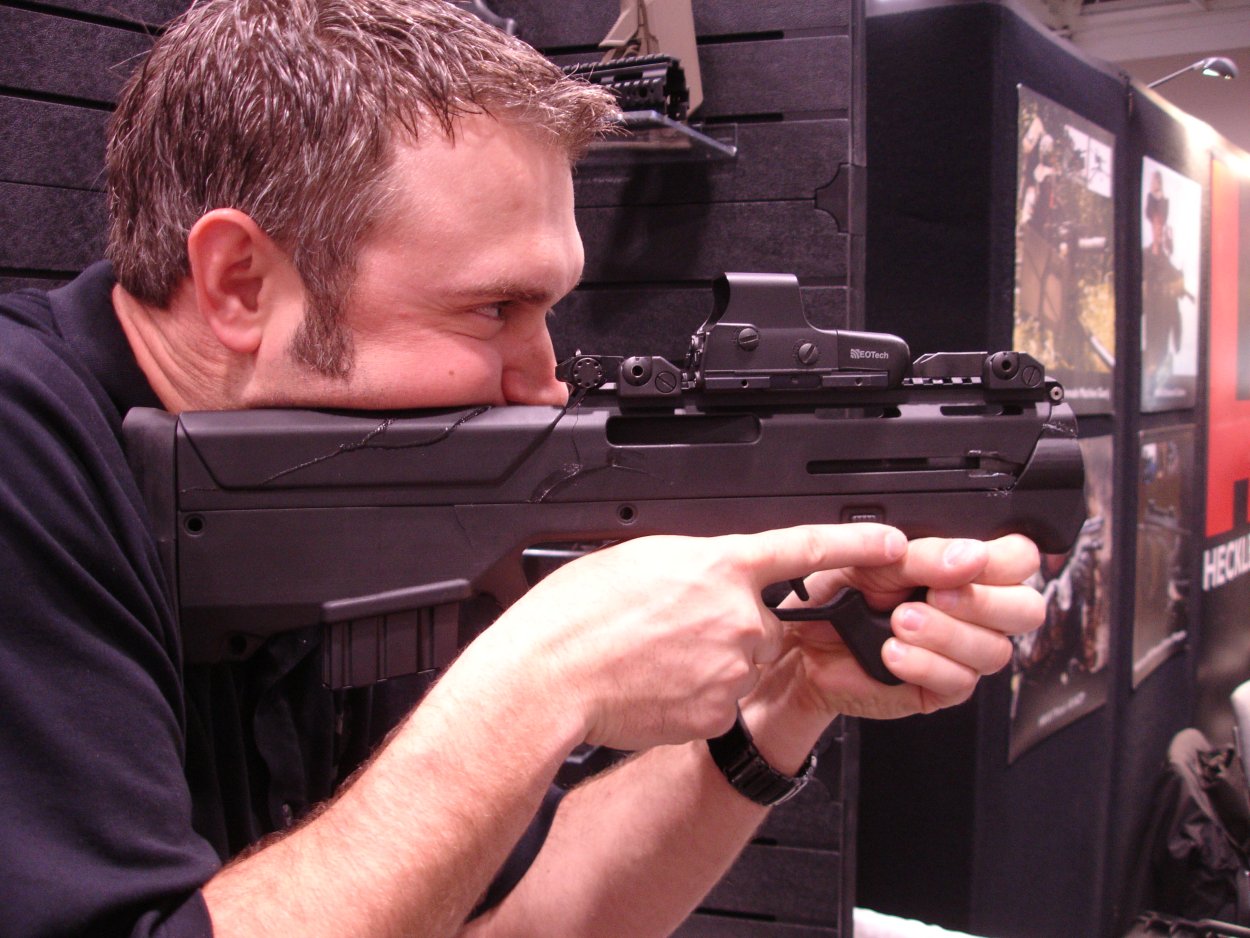 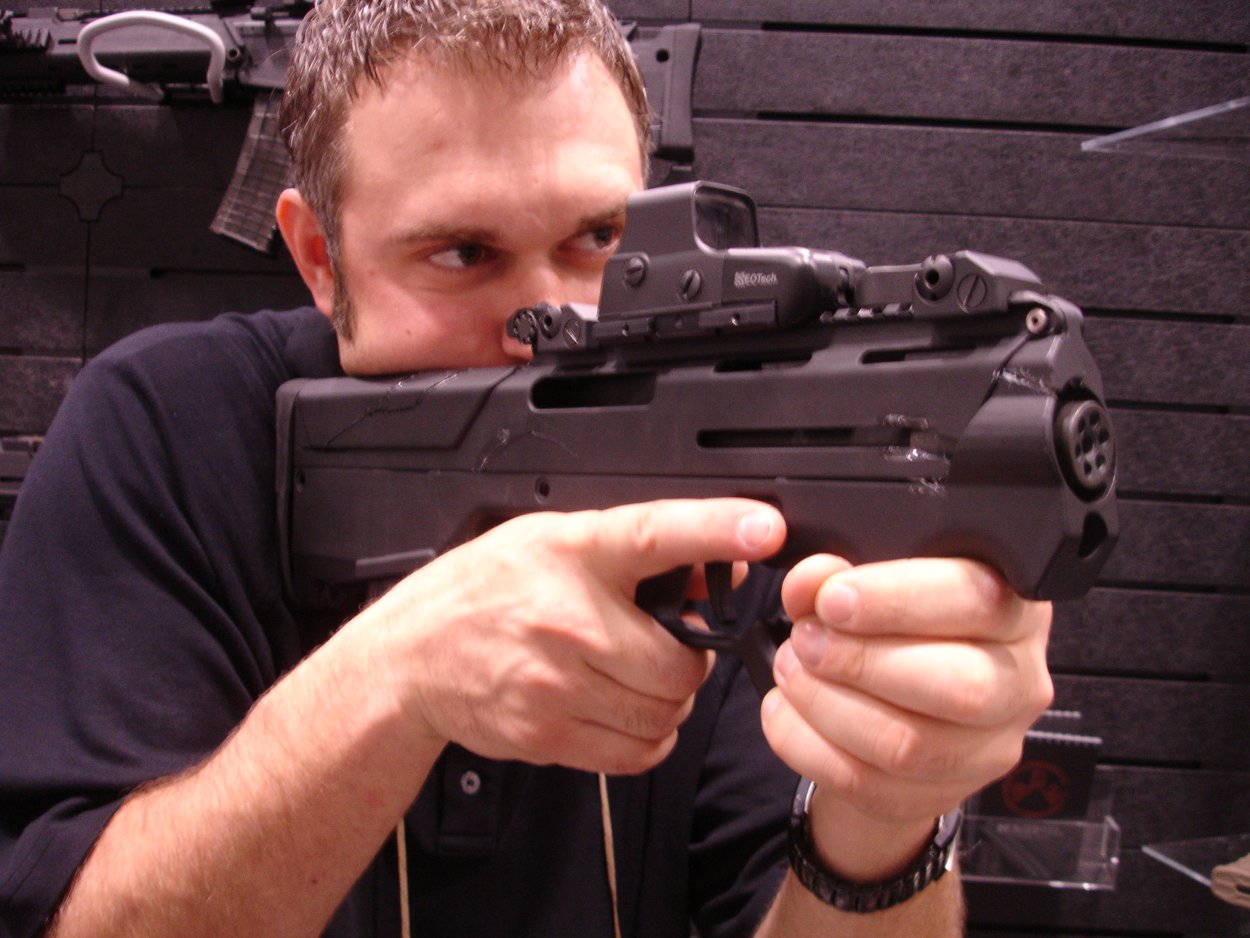 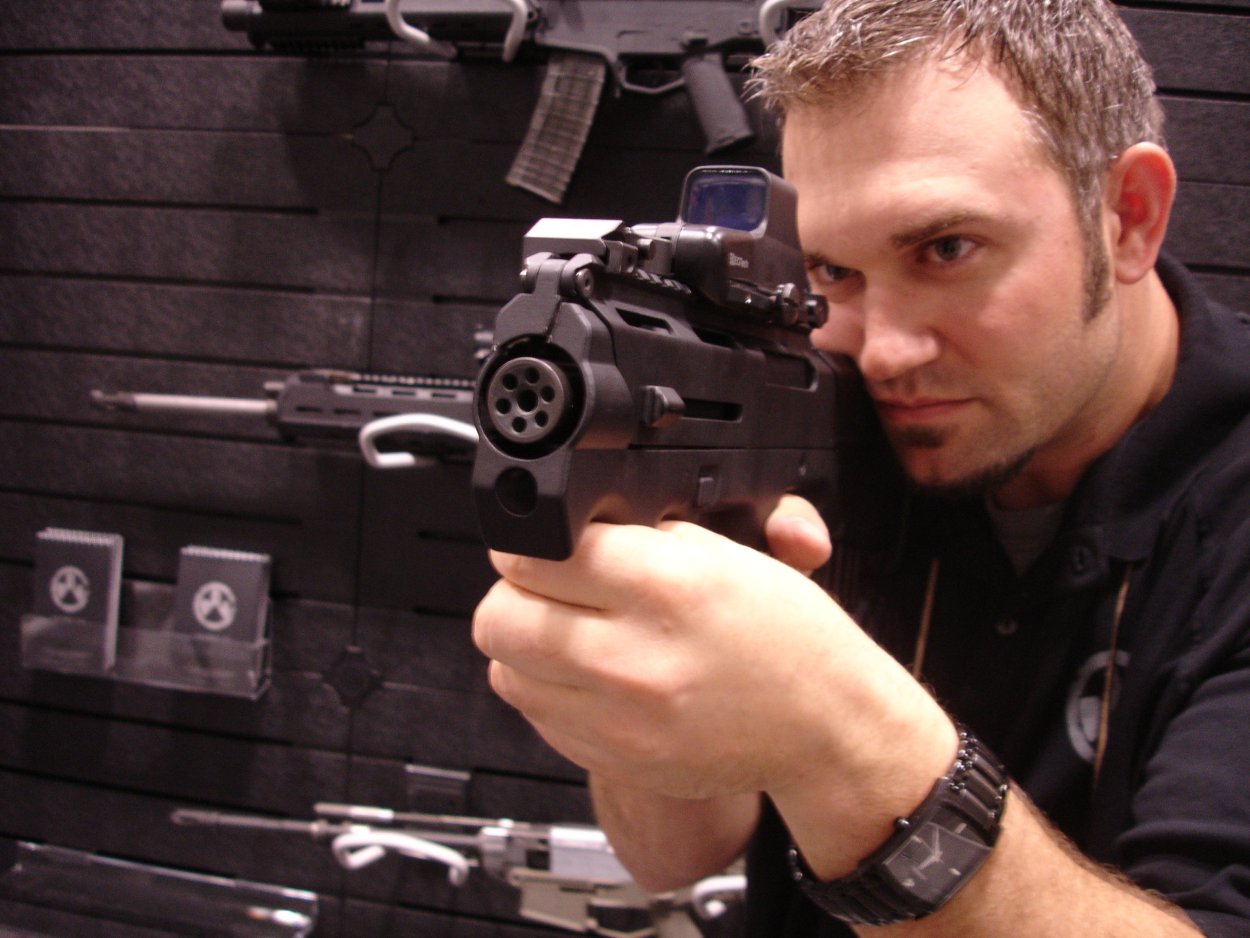 MagPul Developing New Weapon (Small Arm) on the ‘Down Low’

David Crane started publishing online in 2001. Since that time, governments, military organizations, Special Operators (i.e. professional trigger pullers), agencies, and civilian tactical shooters the world over have come to depend on Defense Review as the authoritative source of news and information on "the latest and greatest" in the field of military defense and tactical technology and hardware, including tactical firearms, ammunition, equipment, gear, and training.
Previous DefRev Goes to Blackwater USA for NDIA Firing Demo: Advanced Tactical Small Arms
Next DefRev Exclusive Follow-Up: MagPul PDR Concept Drawings and Fact/Spec Sheet