The following is a Desert Tactical Arms (DTA) press release: 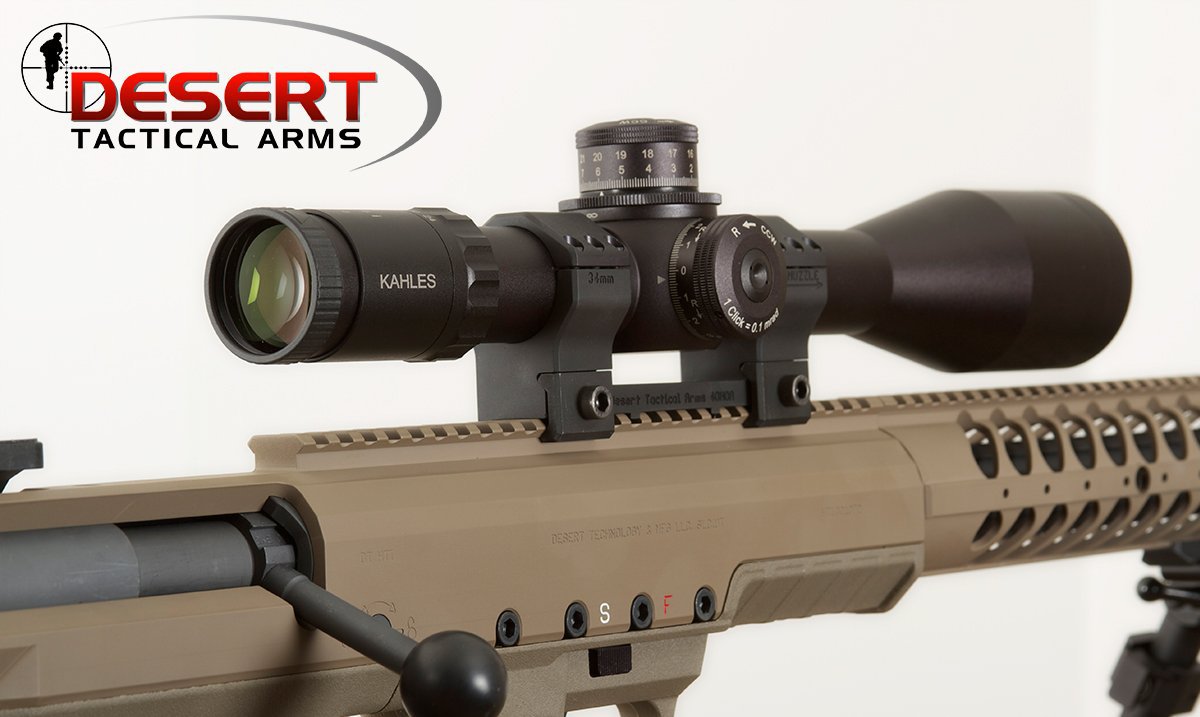 Since the beginning, Desert Tactical Arms has put tremendous focus on seamless systems integration, to ensure that users of our products receive an experience that surpasses any other. Desert Tactical has truly redefined the pinnacle of precision, pushing accuracy to a level previously reached by only the most meticulous hand loaders.

The journey began six years ago, when we created the most advanced precision rifles the world has ever seen.  We understood then, like we do now, that the rifle only serves as a foundation block that the entire firing process is built around.  After developing the rifle, we optimized system harmonics by studying muzzle blast and barrel harmonics. We then created muzzle devices that minimized barrel whip and defused gas expansion, to prevent projectile disturbances upon exiting the barrel.

Once our rifle's firing harmonics were optimized, we moved on to the ammunition, as a rifle's accuracy is limited by the potential of the ammunition fired through it.  After years of development, investment, and recruitment of synergistic personnel, Desert Tactical Munitions is now manufacturing ammunition with consistency never-before-seen, even by most hand-loaders.  Like all great journeys, there have been roadblocks along the way, but the formula to success is persistence, and through persistence we are here today.

We are very pleased to announce that the next stage in Desert Tactical systems integration has arrived, with the establishment of a partnership with Kahles Optics.

Kahles is the sister company to the oldest maker of the world's finest scopes, who is known worldwide for producing the best glass, coatings, and legendary hunting optics, that consistently outperform the competition.  Though perhaps a lesser known fact, those same fantastic lenses and coatings are also found in the high-end products from Kahles.  For the majority of Kahles' history they have produced military optics, but for the last 25 years the owner has kept the focus for both companies sharply on sporting optics, and restricted Kahles from building military scopes. In 2010 however, those restrictions were lifted, and Kahles aggressively expanded back into the tactical scope market, coupling the best glass in the world with cutting-edge mil-spec precision optics. Their optics include the: K3-12x, K6-24x, and K1-6x. Since their new line released just 2½ years ago, they have already won several military contracts throughout Europe and the Middle East.

Founded in 1898 by Karl Robert Kahles, Kahles Optics has existed for 115 years. Kahles has a history of innovation, and pioneered many of the features commonly found in scopes today:

1) In 1949 they developed the first ever variable power riflescopes

2) In 1960 they developed the first ever waterproofed riflescopes

4) In 2005 they developed the first ever multi-zero scope

5) In 2007 they introduced the world's first intelligent automatic light system in a scope http://www.kahles.at/eng/company/milestones/ 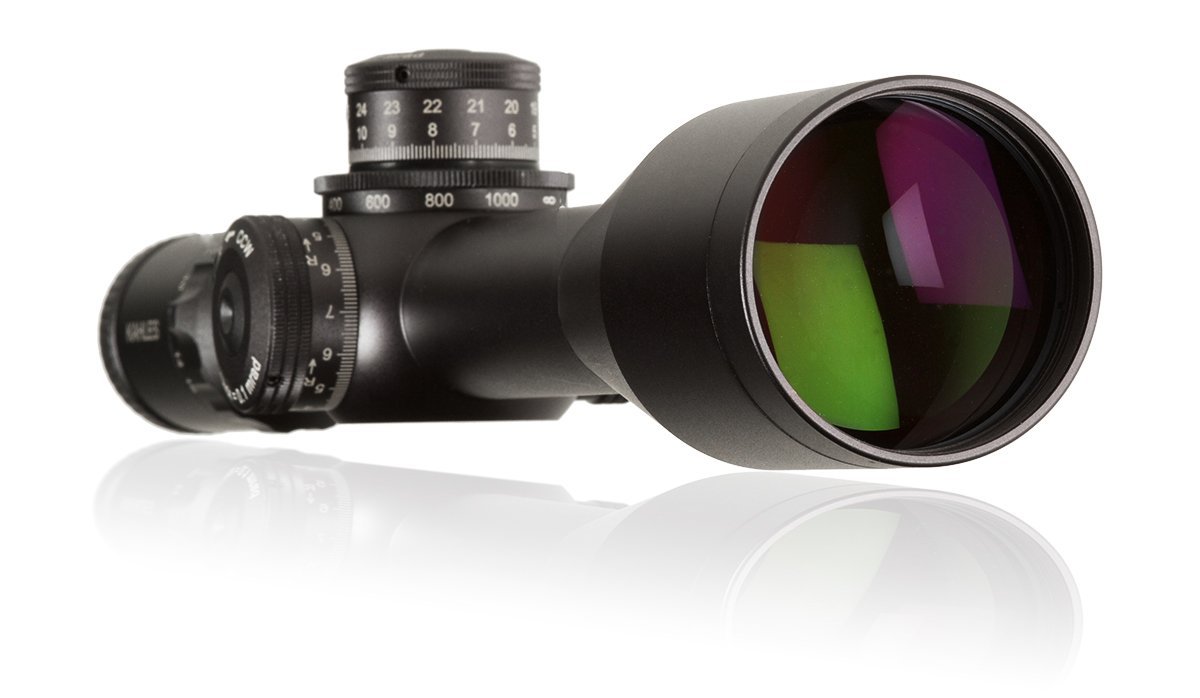 – Their scopes are incredibly lightweight, but remain extremely strong; with their 115 years of scope design, they have perfected their alloy mixtures for long-term strength and durability, without compromising on weight or aesthetics.

– Unique technologies allow up to 20% wider fields of views in very compact scopes.

– Erector cell stops that prevent elevation from being adjusted at the extreme ranges where it would limit adjusting windage turrets to their extremes.  This eliminates the problem of bumping the erector cell up against the inside tube wall which would move the erector cell erratically out of its prescribed position.  Few others do this.

– Reticle stays put; it doesn't move off target when adjusting parallax. You would be very surprised how many high end scopes wander more than 3-5 MOA off target while turning the parallax adjustment.  Next time you think your ballistic computer is off, put a bore sighter on your gun and adjust your parallax.  Many very popular scopes considered to be high-end and used by the US military have this issue.

– Precision Parallax adjustments are preset at every range marking on the knob (100, 200, 300, 400, etc…).  Most set only the 100 yard setting on the knob and all others are just a reference to get you close, some don't even bother to put distance markings on the parallax knob at all, which ironically that same company hasn't elected to ensure the crosshair stays put when adjusting parallax.

Key Benefits in their existing line of Tactical Scopes:

They promise acceptable delivery times; these days it has been impossible to get reliable delivery times from most all scope companies.  With the production capacity they currently have at their production facility and the rapid expansion versatility they have with their sister company, they can push overruns into an additional plant for the largest military contracts without alienating their other customers. 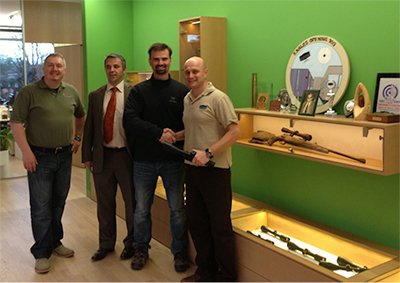 A Look Inside Kahles: 115 years of Optical Artisans

Kahles is headquartered in a newly constructed, state-of-the-art facility in Vienna, Austria.  Their machine shop is a technological marvel of CNC turning centers and screw machines humming along quietly under the “sound dampening” thermal regulating ceiling panels.  These are custom designed and developed by Kahles themselves, to keep the shop temperature exact at all times. This allows them to produce parts with space shuttle precision.

Entering through the air locked doors into the assembly area, is like entering a decontamination chamber; all employees wear special footwear to ensure no speck of dust contaminates the room or scope lenses.  An assembly line of optical artisans, each with his own set of magnification tools, cleaning solutions and parts, assemble each phase of the scope building process. Every employee is a true precision craftsman, with a lifetime of technical experience, displaying loyal workmanship and pride for a company that has grown to become a part of their being.  Final inspection processes are extremely stringent; they set and test all aspects of the scope (adjustments, parallax, magnification, light transmission, etc.).

Entering their warranty department was a relief because their warranty shelves were virtually empty, with the majority of the scopes on the shelves being older than me, with some looking to be older than my dad.  Incredibly they still had great glass in them and were being restored for historic collectors.  It was a privilege to see what 115 years of business had created and it was as beautiful as watching a performance by a professional symphony.  It was obviously a very efficient operation that produces thousands of scopes every year.

Kahles takes honesty very seriously and will not employ marketing gimmicks by claiming power ranges that are not true like many other scope companies regularly do.  For example, some companies may claim a scope is 1-8x when it is really 1.8-7.2x, thereby using creative rounding to give the product a marketing boost.  Kahles power ranges are 100% what they claim them to be and at those power settings they have some of the widest fields of view in the industry.

They also do not employ useless magnification ranges at lower power settings; most of us have seen a scope with an exaggerated magnification range that when we power below per say 6x, the images size becomes smaller but the field of view stays the same size.  This creates dark circles around the image, and an overall negative shooting experience. This is yet another example of a marketing gimmick employed by other companies to sell more scopes.

Both Kahles and Desert Tactical Arms have a passion to create new innovations that will revolutionize the tactical world.  Together we will create synergies empowering us to do things that neither of us could do on our own.  Desert Tactical Arms has been looking for a scope company with the quality, production capability and mindset to execute the next level of innovation, and we believe that Kahles is the very best company in the world to meet these goals.  It is a very exciting time and marks another milestone in Desert Tactical's goal of seamless weapon systems integration.  The partnerships provides Kahles the opportunity to partner with a leader in the precision rifle manufacturing, and continue in their tradition of revolutionizing optics technology.

Photo of Partnership arrangement at Kahles headquarters in Austria.