When we initially laid eyes on the SRS, we noticed that it bared a striking resemblance to the… 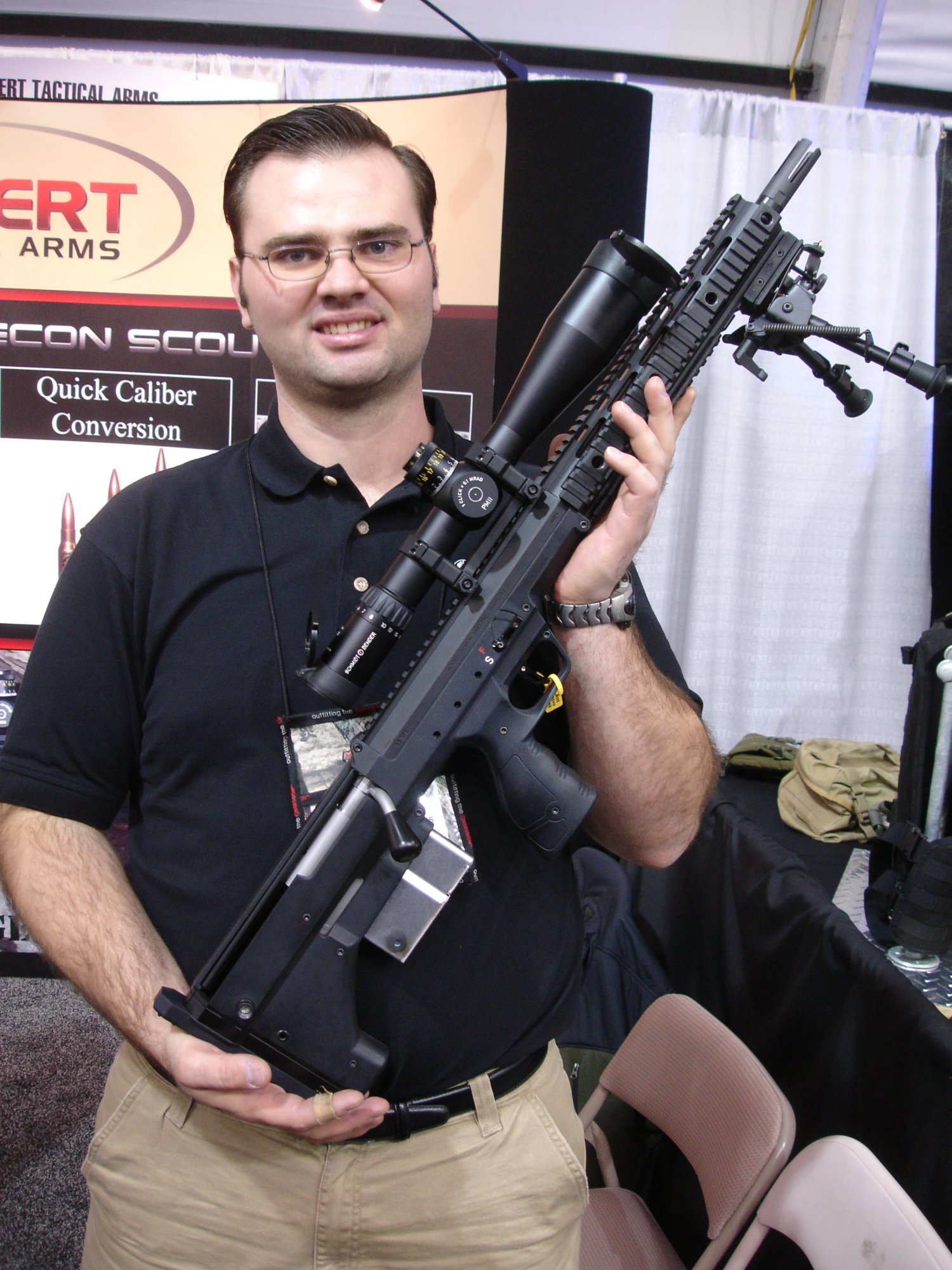 DSR-1 Rifle made by DSR-precision GmbH (Alpirsbach, Germany). We had no doubt that the designer/developer of the SRS rifle was heavily influenced by the DSR1–and we were right. Nicholas Young a.k.a. Nick Young is the SRS’s designer/developer. When we spoke with him on the phone, he confirmed that the DSR-1 bullpup rifle was a primary influence and starting point, due to what he saw as an excellent and superlative design in many respects. However, that’s all it was, an influence and starting point. In designing and developing the SRS, Young made a lot of changes/modifications to simplify the DSR-1’s design (specifically, its complexity), lower the rifle’s weight, enhance the weapon’s durability/ruggedness under combat conditions, simplify and lower manufacturing costs (and, therefore, the purchase price), and generally improve its performance for combat use, i.e. hard use by U.S. military end-users (i.e. snipers a.k.a. long-range-interdiction specialists), i.e. U.S. military snipers.

Upon viewing and handling the weapon (SRS) at the show (SHOT Show 2008), it would seem that Mr. Young and the rest of the team at Desert Tactical Arms (DTA) were successful in their efforts, although we’d have to see professional third-party test results and/or test the SRS ourselves in order to be sure.

All four members of the Stealth Recon Scout family of bullpup sniper rifles are relatively light and short compared to competitive sniper and anti-materiel rifles in the same calibers. Respective OA weights and lengths for the various calibers of SRS rifles are listed below in the "Rifle Specifications" section of Nick Young’s SRS development history brief that he wrote for Defense Review. 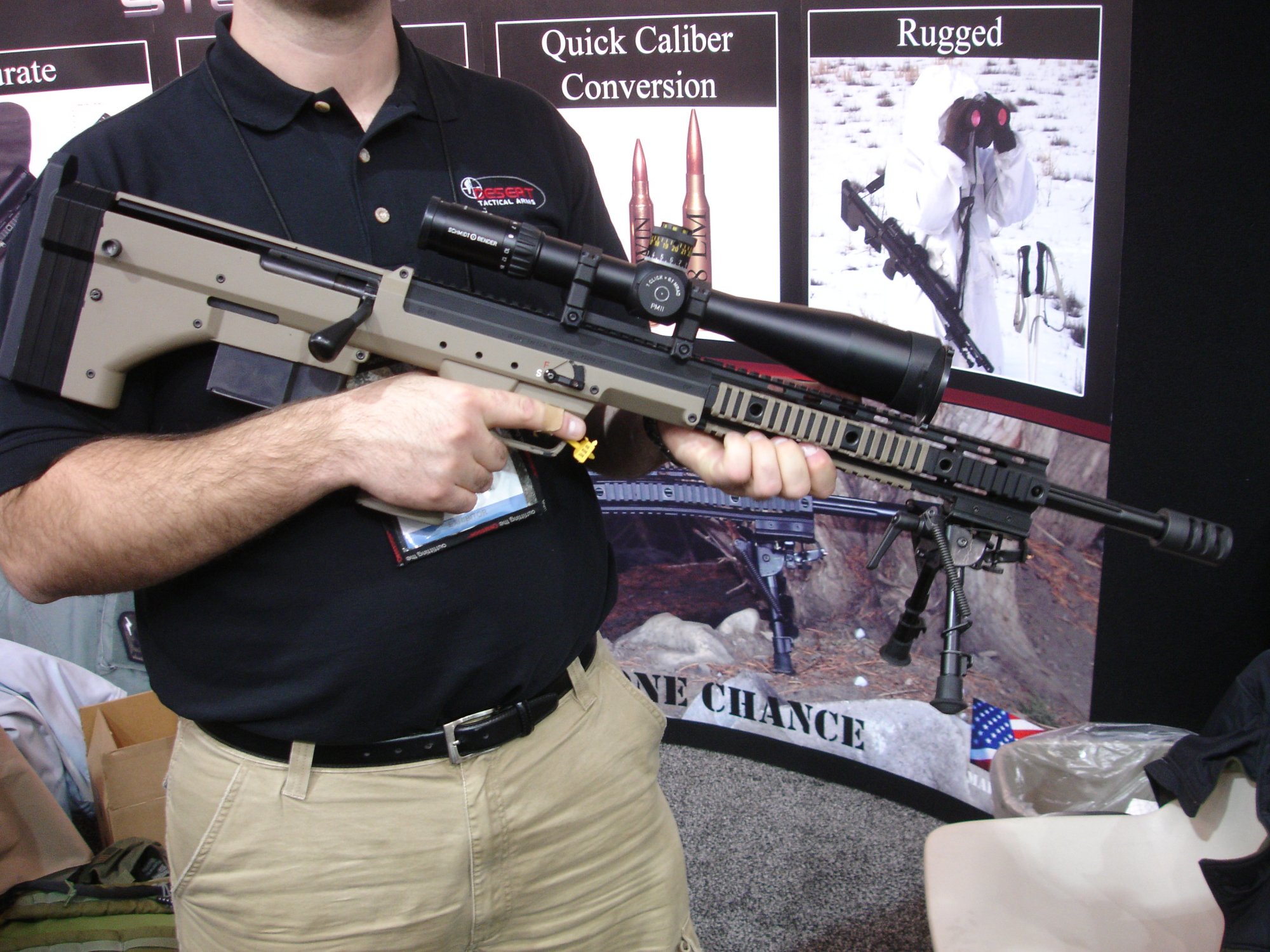 However, before we get to that document, in comparing the DTA Stealth Recon Scout (SRS) rifle to the DSR1 rifle, you can see where the Desert Tactical Arms team cut some of the weight and complexity: 1) They removed the DSR1 Rifle’s two bars (double bars) under the forend rail tube (i.e. the front of the receiver), the DSR-1’s monopod buttstock assembly, and the DSR1’s "grip frame"/spare magazine holder assembly situated in front of (forward of) the trigger.


Nick Young Brief on the Design and Development History of the Desert Tactical Arms Stealth Recon Scout Rifle (DTA SRS Rifle) (edited by DefenseReview on 2/27/08 for punctuation and readability):

Developer’s History
I, Nicholas Young, designed the Stealth Recon Scout sniper weapon. I have been a part of the shooting community since my early childhood. I shot on the University of Utah’s Collegiate pistol team for four years and regularly compete in sniping competitions, I am an avid hunter, and I have done consulting for scope manufacturers and rifle manufacturers. I love shooting guns of all shapes and sizes but I have a deep obsession for extreme distance shooting and I have extensive experience shooting out to 1 mile and beyond. 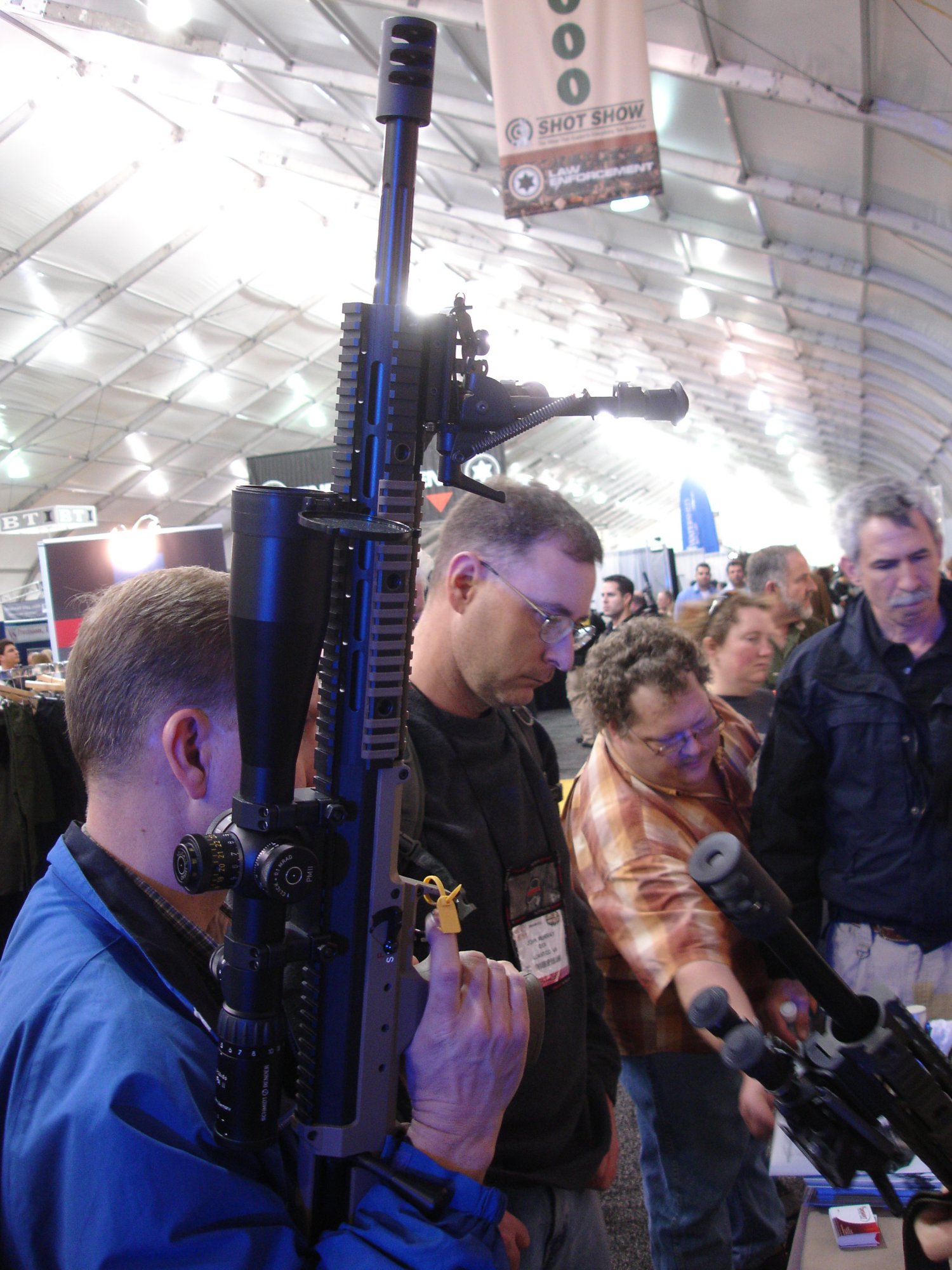 I have thought for a long time that a sniper weapon could be built in a bullpup design to make it more compact and improve its balance. By utilizing the bullpup design, an SRS rifle chambered in 338 LM with a 26 inch barrel is 11” shorter than a conventional sniper rifle. In fact, it is actually shorter than the standard M16 battle-rifle currently deployed by US troops. The .308 WIN version with a 22” barrel is about the same length as an M4.
The bull-pup design significantly enhances the weapon’s balance, putting the balancing point just in front of the trigger guard. This makes off-hand or unsupported shots very comfortable to make, and greatly reduces fatigue from holding the rifle steady.

Everything on this rifle has been streamlined to minimize its size, profile, and abrasiveness. I wanted to make it easier for real world operators to lug around. The DT SRS bullpup anti-materiel / sniper rifle is the most comfortable rifle I have ever handled, and I love watching people’s faces when I hand them the gun. Their typical response is “Wow, the rifle feels like it’s a part of me, and I don’t want to put it down”. 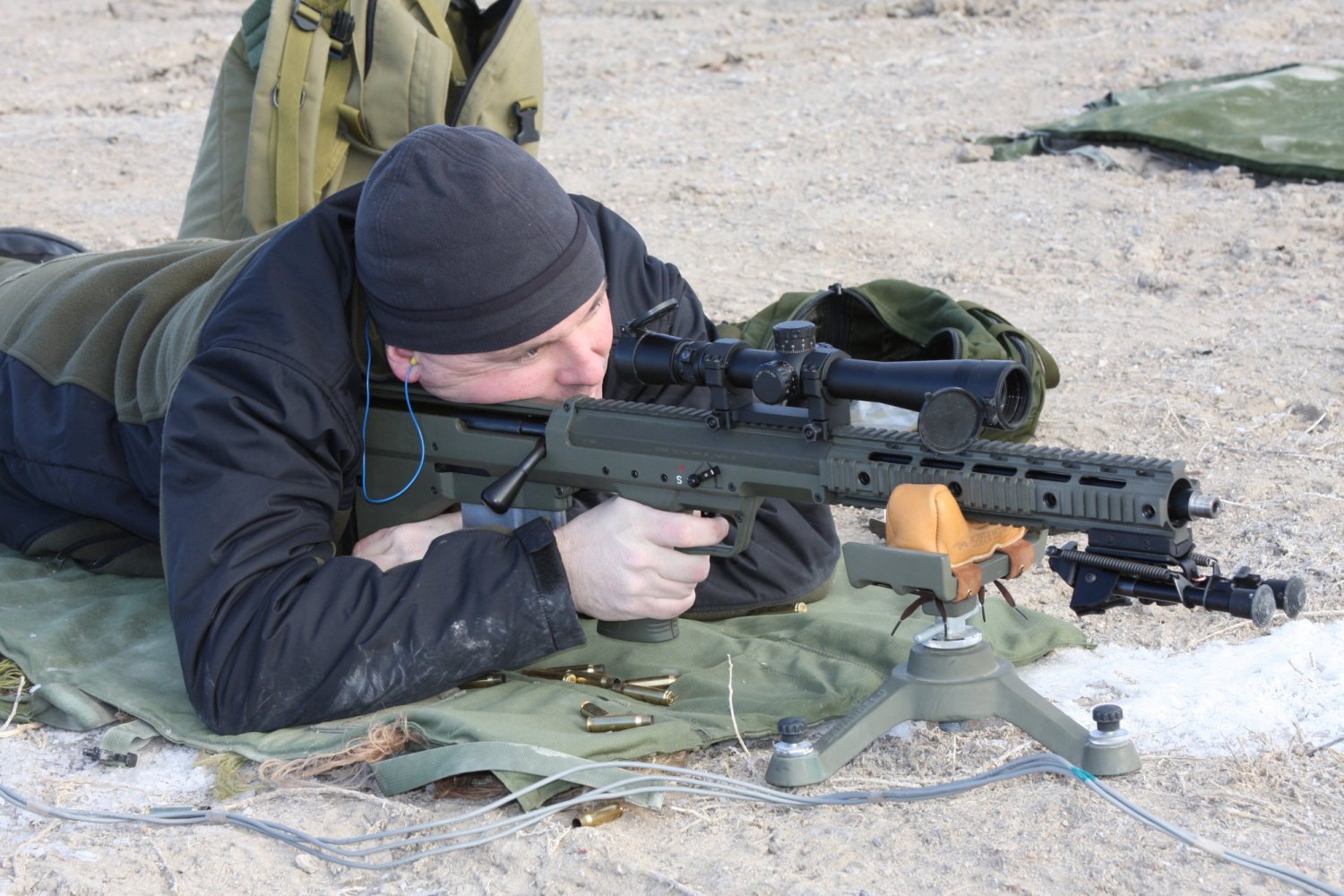 I didn’t want the SRS to have any of these flaws, so I analyzed the complaints. My first observation was that having the magazine in the rear on a small infantry weapon may slow magazine changes. However, on a long heavy sniper rifle, it greatly enhances the speed and convenience of magazine changes. On my traditional sniper weapons, I have to tip my rifle on its side and use both hands to reach far forward out of my shooting position to rip the magazine out of the magwell. This was a major pain and very slow (not to mention that it is difficult to hold a, barrel-heavy, 17-lb rifle with your elbows or hips while both hands are busy changing the magazine out).

In addition to having the magazine easily within reach, I designed the magazine release to be easily actuated from the prone position. Plus, the magazine free-falls when released, making it very easy to change magazines with one hand without coming up off the rifle to do so.

To break the bad trigger myth, I evaluated just about every bullpup trigger design ever conceived and identified the designs that showed the most promise. I then used those designs as a base starting point. With some additional design work, and a lot of polishing, we built an excellent match grade trigger assembly that rivals conventional match grade triggers. You can adjust the trigger’s overall travel, weight and backlash, and you can even add a second stage, or change the trigger’s location. 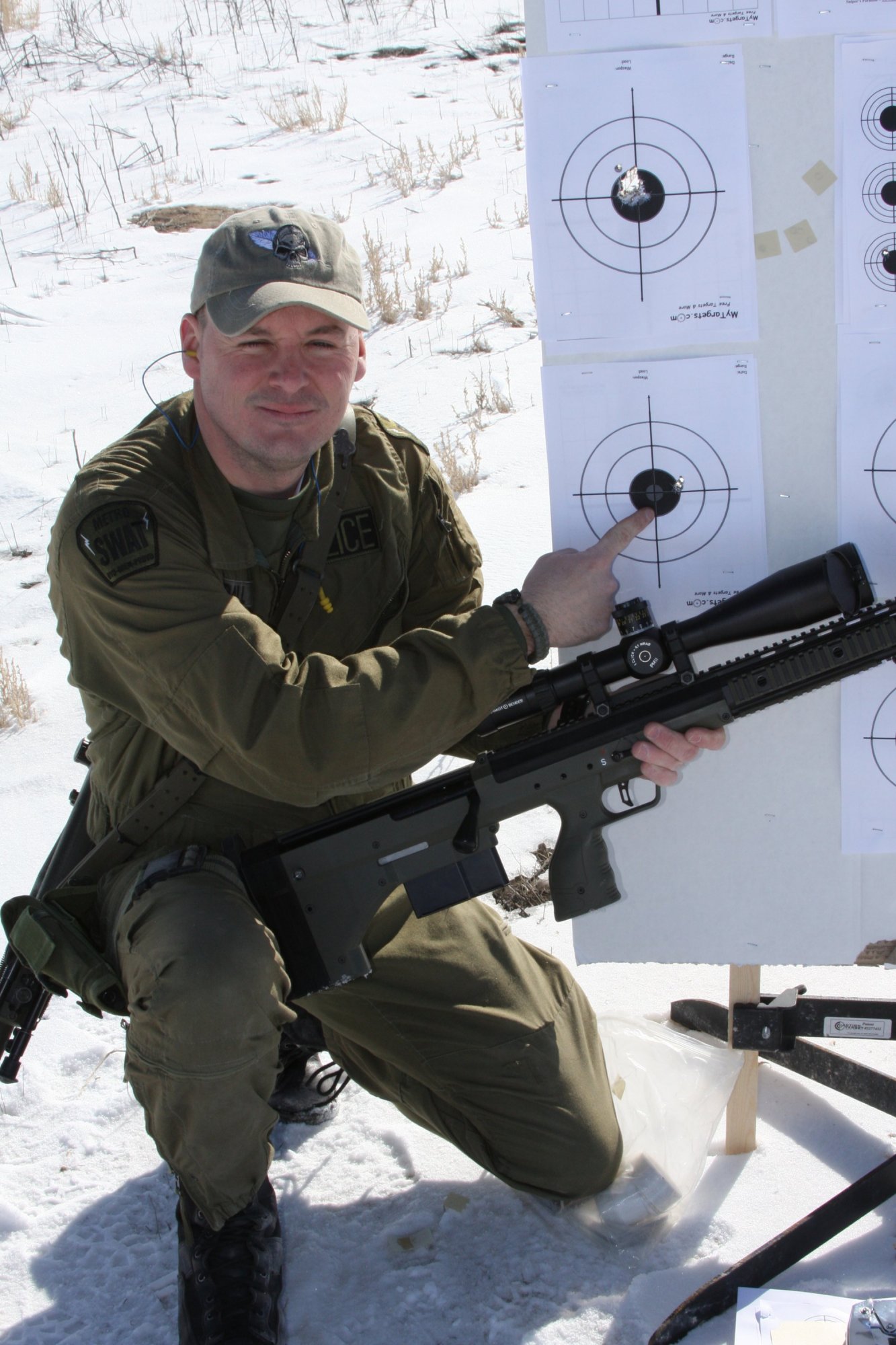 I couldn’t conceive an acceptable solution for making an ambidextrous bullpup design. The only way I could have made the SRS completely ambidextrous to my satisfaction was by ejecting the spent cases out of the bottom of the action. But then the rifle would only be a single shot because I would have had to give up the repeating magazine, which I didn’t want to do. However, on a brighter note, because the rifle is a bolt action and won’t eject a case into your face when fired, it can be safely and comfortably fired left handed. However, you must lift your head out of the way to cycle the bolt when shooting left handed.

Why the 338 LM
The Stealth Recon Scout bullpup sniper / anti-materiel rifle was designed around the .338 Lapua Magnum cartridge. I have eight years of experience behind the .338 LM, and I feel it is the best sniping cartridge available anywhere. A .338 LM rifle system can be built with the same size and weight characteristics as well known .308 Win rifles, yet it has a trajectory that rivals the popular .50 caliber rifles. Of course, the .338 LM has more recoil than the .308 Win, but the recoil is very manageable and no where near the problem that it is with a .50 caliber. The 338 LM also has very good penetration when using military AP ammunition.

Accuracy
We made accuracy the very core of the SRS. Understand that if everything else failed, the SRS had to shoot up a storm. The rifle underwent more than ten complete redesigns before we were completely satisfied with it. Luckily the majority of the design work was accomplished using state-of-the-art 3D design programs. We were able to completely build the rifle and test it for strength and function before our cutters ever touched metal. 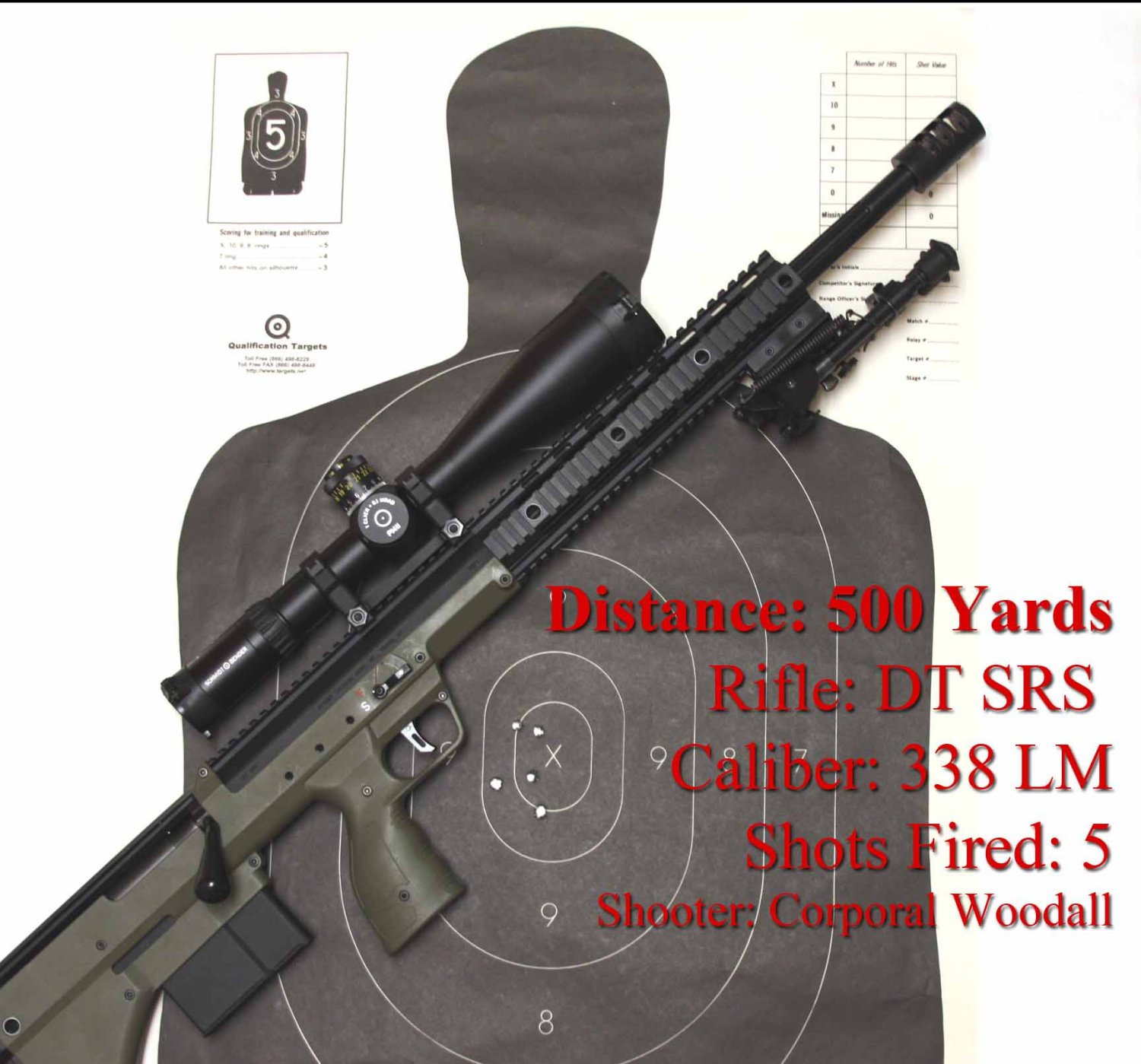 The accuracy of our barrel mounting system is exceptional and very repeatable. We cannot discern any impact change when reinstalling the same barrel back into the receiver. This system is actually quite common, it is utilized in several benchrest style rifles, as well as multiple tactical rifles including the French PGM Ultima Ratio, the German DSR-1, and the Austrian Unique Alpine TPG-1.

Conversion Ability
Initially I was planning on making a dedicated .338 Lapua Magnum rifle. But in talking with military and police contacts, they showed much interest in being able to convert the rifle down to the .300 Winchester Magnum and .308 Winchester cartridges. This conversion feature allows the rifle to be deployed in an urban environment where mobility is desired and over-penetration is to be avoided, yet you can deploy the same weapon in mountainous terrain where shots can be taken up to a mile away with the. 338 Lapua Magnum. Plus, operators only need to learn one system, one rifle and one scope. They can train new shooters with the smaller .308 WIN, which is generally easier to shoot and has a barrel life that is four times longer than the 338 LM.

We also built our magazines with a shoulder retention feature to prevent the tips from being damaged from recoiling against the front of the magazine, which can deteriorate accuracy. Our internal magazine length is 3.95” long, which is 0.30” longer than the magazines used by Accuracy International. Now you can load the 300 grain Sierra Matchking out where it’s supposed to be.

Rugged
My mindset was to keep the rifle as simple as possible and do away with any gadgets or gizmos that can break or add unnecessary weight to the rifle system.

We took the core components of accuracy; a match free floated barrel, match trigger, military match spec chamber, and a solid mounting platform, and wrapped it in a tough-as-nails package by using state-of-the-art materials, including ultra-high strength steels, aircraft grade aluminums, and high-impact polymers. We have conducted the standard military drop tests and shot the rifles extensively in sub-zero temperatures without any problems. 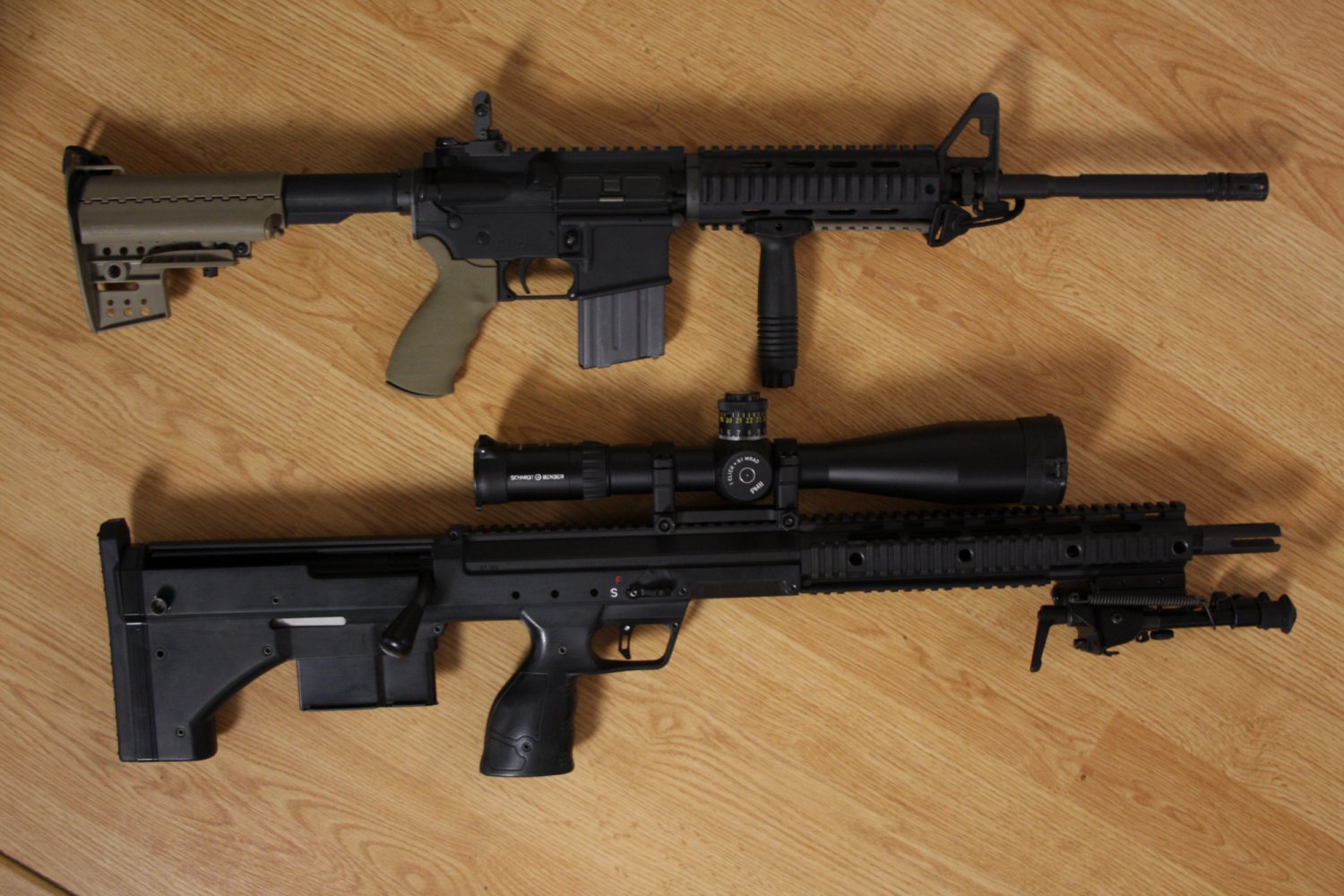 Ergonomics
As was mentioned above, the SRS is very comfortable to handle and carry. Another one of our primary goals was to reduce shooter fatigue when lying behind the rifle. In the shooting position our rifles’ ergonomics naturally flow with the shooter’s body, which greatly reduces shooter fatigue. We accomplished this by building the ergonomics into the weapon from the ground up instead of adding clunky adjustable features as an afterthought. For example, you won’t see an adjustable cheek piece on the SRS. But that doesn’t mean you can’t get the proper cheek weld. Quite the contrary. We have optimized the cheek height with the scope rings to ensure the center of the scope is perfectly aligned with the shooter’s eye. We have done extensive testing, and over 99% of all shooters who have handled the weapon are able to achieve their natural cheek weld with the SRS with perfect scope alignment. We designed it so you can install any scope with an objective lens of 56mm or smaller. And, by using DTA’s rings, the center of your scope won’t change it’s position just the objective diameter changes.

We also made a raised butt pad standard so the rifle will seat in the shooters shoulder more solidly in the prone position to prevent the rifle from sliding down the shooters chest. It also enhances recoil management. Because the shooter’s shoulder is just above the centerline of the weapons barrel, muzzle rise is noticably reduced.

David Crane started publishing online in 2001. Since that time, governments, military organizations, Special Operators (i.e. professional trigger pullers), agencies, and civilian tactical shooters the world over have come to depend on Defense Review as the authoritative source of news and information on "the latest and greatest" in the field of military defense and tactical technology and hardware, including tactical firearms, ammunition, equipment, gear, and training.
Previous GlockWORX Custom Glock 19 Pistol with Docter Sight Plus II Combat Optic
Next MagPul Masada Rifle/Carbine Becomes the Bushmaster Adaptive Combat Rifle (ACR)