A company called FreeLinc recently introduced a tactical headset for military Special Operations Forces (SOF), law enforcement swat teams, and PSC/PMC PSD/Security Operators called the FreeMotion 200 that represents a significant development in secure tactical communications–the key word being "secure". Of course, there are a number of companies out there making high-quality tactical headsets that allow for secure tactical communications. However, they all involve wires that go from the headset or earpiece to the operator's two-way radio. The FreeMotion 200 tactical headset, on the other hand, is wireless. The wireless aspect, by itself, isn't anything to report. It's the fact that the FreeMotion 200 allows for a secure wireless link between the headset and the radio that's important.

Unlike RF and Bluetooth transmissions, the FreeMotion 200 tactical headset creates a secure communications "bubble" (a.k.a. secure comms "bubble") around the user that allows for a secure, interference-free two-way tactical communications link between the earpiece/headset and FreeLinc remote adapter (attached to the body-worn tactical radio) that blocks interception and interference. Communications inside this secure bubble is clear and can't be hacked–and that's the breakthrough. The secure comms bubble that envelops the user would appear to… 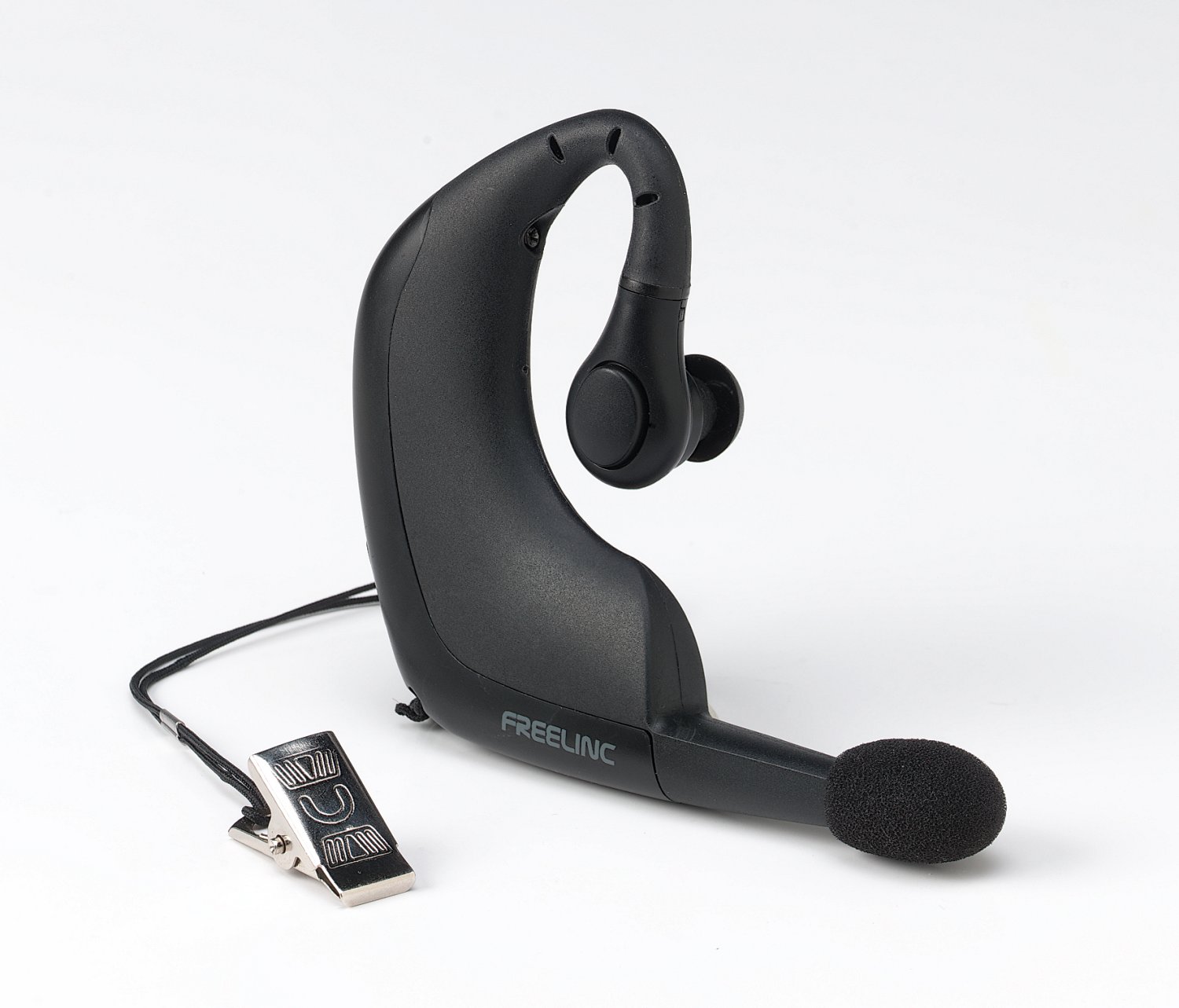 form a kind of invisible faraday cage around the operator/user.

If you'd like more information on Near-Field Magnetic Communication (NFMC) technology, DefenseReview suggests that you check out the Aura Communications Technology website.

In a nutshell, the LibertyLink Near-Field Magnetic Induction Communication technology, when applied to a wireless tactical headset like th FreeLinc FreeMotion 200, gives military and law enforcement tactical operators a wireless headset with all the clarity and security of a wired system, allowing for more freedom of movement and lowering the chance of snagging during dynamic tactical operations (military urban warfare operations/MOUT operations and SWAT operations, including CQB/CQC, IHR ops, VBSS/MIO, GOPLATS, destruction operations, dynamic entries, and rapid-action assaults).

The FreeMotion 200 wireless tactical headset weighs 1.1 ounces (oz) (less than 31 grams). The remote adaptor weighs 0.7 oz (less than 20 grams). Headset dimensions are 0.5×3.4×3.6 inches (13x87x91mm). Adapter dimensions are 2.8×0.9×0.9 inches (71x23x23mm). Operating range is 3 to 5 feet (0.9 to 1.5 meters). It is ambidextrous (can be used in either ear), utilizes removable conforming ear gels, and is adaptable to custom ear gels. It can be utilized with a Push-To-Talk (PTT) button or optional VOX. Volume control is on the headset. Power is provided by lithium polymer rechargeable battery that allows for twenty (20) hours of continuous talk time. The unit comes with a wall charger, but a car charger is also available. Operating temperature range is -22 degrees to +140 degrees Fahrenheit (-30 degrees to +60 degrees Celsius). Humidity range is 95% RH @ 8 hours (non-condensing).

The following information comes from the Aura Communications Technology, Inc. website, and explains the NFMC tech in technical detail:

While the concepts behind magnetic induction communication have been around for decades, Aura's engineers are the first to develop and implement practical solutions capturing the benefits of this technology.

Conventional radio frequency (RF) wireless communication systems are optimal for sending large amounts of information and communicating over long distances. However, this consumes power, creates information security issues, and results in interference and "crowding" among devices. A good example is in the 2.4 GHz band where simultaneous operation of a cordless phone, WiFi network and Bluetooth headset is frequently not possible without severe degradation of Quality of Service. In sharp contrast, LibertyLink's magnetic communication operates in a "bubble" that envelops the personal space of each user and is – by the laws of physics – inherently private and secure. The result is an easier to use, lower-cost system that makes far more efficient use of power and bandwidth than conventional RF solutions. By selecting a technology that limits the range and bandwidth to only what the application requires, Aura achieves a very substantial savings in power with all of the simplicity advantages of LibertyLink: dedicated communication channels, no bandwidth sharing, complete frequency re-use between bubbles, worldwide regulatory flexibility, and reliable coexistence with WiFi, CDMA, TDMA. and GSM transmissions.

In streaming voice and audio communications in personal electronic devices, Aura's magnetic communication offers better power, cost and quality-of-service than any other wireless technology, including WiFi, 450 and 900 MHz RF, and Bluetooth . The result is a long list of advantages for OEMs and product designers.

The Physical Medium in Near-Field Magnetic Communication: Fields vs. Waves

Whereas most wireless communication is accomplished by propagating an RF plane wave through free space, near-field magnetic wireless utilizes a non-propagating quasi-static magnetic field. For example, in a typical RF communication system a transmitter couples a modulated RF voltage to an antenna. The antenna in turn generates a modulated RF plane wave (in the far field) which flows through free space while alternately transferring its energy between its electric and magnetic fields. The energy transfer between the fields occurs at the carrier frequency which in most modern mobile devices is 900 MHz or 2.4 GHz. A receiving antenna on the remote device receives the energy from the plane wave and converts it into a modulated voltage input to a receiver that extracts the information content.

A magnetic wireless system on the other hand does not rely on the flow of energy for communication. Instead the modulated magnetic field generated by a transducer element remains relatively localized around the transmitting device. The quasi-static characteristic of the field is the result of the transducer geometry in combination with the carrier frequency of the transmitter. Information is “coupled” through the medium by sensing the time varying magnetic field using a similarly designed transducer in the remote receiving device. This is the principle of magnetic induction. While a small amount of RF energy inevitably flows from the transducer, the majority of the energy is stored in the form of a magnetic field. It is this fact that provides for some of the unique advantages of magnetic communication.

Although the propagation characteristics of an RF plane wave are extremely complex and difficult to model, various approximations have proven to be valid under certain conditions. One characteristic of particular interest, at least as it relates to magnetic communication, is the roll-off behavior as a function of distance. The power in a plane wave in the far field rolls-off as one over the distance from the source squared (1/r2). Compare this to a quasi-static magnetic field where the roll-off is 1/r6. The chart below shows a relative comparison of RF Power and Field strength (E-Field) and magnetic field values (B-Field)

On the surface this would appear to be a considerable disadvantage of magnetic communication systems. Indeed for any application that requires significant range, RF is the only choice. However, in close proximity systems such as personal wireless for consumer electronics, the roll-off behavior can be a substantial advantage. The strong attenuation with distance creates compact communication “bubbles” of 1 to 2 meters that provide for greater reuse of the frequency spectrum. Furthermore, the field characteristics are highly predictable and relatively unaffected by the surroundings. Magnetic fields reliably follow the 1/ r6 behavior regardless of the presence of metal objects, conductive materials, or people. Plane waves on the other hand are greatly affected by their surroundings. While an RF plane wave is significantly attenuated by the human body, a magnetic field passes relatively unimpeded. In RF systems, this severe loss of signal is usually restored by transmitting more power — a solution that further complicates the spectrum reuse issues.

As in RF systems, polarization in magnetic systems presents some interesting design challenges. Polarization generally refers to the direction or angular component of a vector field. Magnetic and electric fields are examples of vector fields. In a plane wave, the magnetic and electric field components are polarized orthogonal to each other and to the direction of propagation. In magnetic systems the polarization of the magnetic field is highly dependent on the field source, namely the transducer. A ferrite rod wound with wire is an example of a magnetic field source. While this transducer generates a field typical to that of a classic dipole, the reciprocal properties of magnetic circuits imply that a similarly shaped receiving rod will have an equivalent sensitivity field. Maximum coupling is achieved when two rods, one a transmitter the other a receiver, point at each other. This is called the coaxial orientation. Strong coupling also occurs in the coplanar orientation when the rods are parallel to each other.

Compare this to the orthogonal case where minimum coupling occurs. Here the receiving rod is perpendicular to the transmitting rod. In this null position virtually no coupling occurs.

In a typical RF fading situation, direct and reflected waves of differing amplitudes and phases destructively interfere at the receiving antenna causing a signal null. Ordinarily, a more sensitive receiver would be employed to combat the problem. But in a high frequency reuse situation, the desired signal can fall below the signal from an undesired source. It is not uncommon, especially at higher carrier frequencies, to have a signal from a desired source one meter away fade below a signal from another source ten meters away. Usually the only defense outside of eliminating the interfering source is to increase the power transmitted from the desired source. While this power increase improves the fade margin, it also compounds the coexistence problems. Magnetic fields do not suffer from this problem because they do not propagate and therefore reflections and phase reversals do not occur. The strong and predictable roll-off behavior for magnetic fields allows several closely spaced users to transmit and receive on the same frequency with no interference. This is particularly important for voice or music transmissions in high density applications where guaranteed bandwidth and quality of service are essential.

A Note on Electric Fields

The physics that describe electromagnetic phenomena show that a duality exists between magnetic and electric fields. Near-field electric field communication is therefore theoretically possible. Although these capacitive communication systems can be built with the same 1/r6 roll-off behavior as inductive systems, they unfortunately exhibit a high degree of susceptibility to their surroundings. In a typical magnetic system, the low impedance magnetic field is affected only by large highly permeable objects; things that are not usually encountered in normal situations. The high impedance electric fields in capacitive systems however are greatly affected by their surroundings. Moderately conductive objects including people, severely reshape and attenuate the electric field thus making it exceptionally difficult to communicate with any reasonable amount of power."

New Eagle Tactical Headsets for Special Operations. It's in the Bones.

David Crane started publishing online in 2001. Since that time, governments, military organizations, Special Operators (i.e. professional trigger pullers), agencies, and civilian tactical shooters the world over have come to depend on Defense Review as the authoritative source of news and information on "the latest and greatest" in the field of military defense and tactical technology and hardware, including tactical firearms, ammunition, equipment, gear, and training.
Previous Update: AAE IR/NV-Stealth and Visibility-Stealth Cloaking Technology
Next Review: Polarion PF40 ‘Helios’ HID Searchlight for Tactical and Patrol Ops 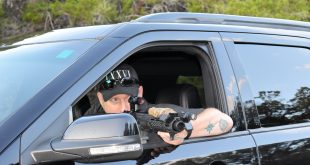