According to Thales UK ASD officials, the LMM laser-guided multirole missile will be able to…

defeat a "sensible target set", including any/all enemy air land and sea vehicles likely to be encountered by Coalition Forces in the asymmetric battlespace, including urban warfare environments. The list of subnational-conflict-type targets that come under the destroyable list via the new missile includes, but is not necessarily limited to the following: Technicals(civilian weaponized trucks), explosives-laiden vans, any/all other civilian light vehicles, slow-moving manned propeller aircraft and rotorcraft, small UAS/UAVs (including unmanned helicopters/rotorcraft), rigid inflatable boats (RIBs), bunkers, houses, jet skis, and even tracked armored vehicles. 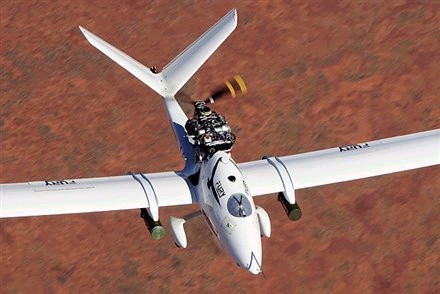 The Lightweight Multirole Missile weighs 28 lbs (13 kg), carries a 6.8-lb (3-kg) blast/fragmentation warhead, and is powered by a two-stage solid propellant motor made by Roxel Propulsion Systems (RPS). The LMM has an effective engagement range of up to 4.3 nautical miles (nm), or 8 kilometers (km), and may incorporate semi-active laser guidance to hone in on the target. Aviation Week reports that "target acquisition, designation and tracking are provided by onboard systems, while target confirmation and final launch authority are given by the ground station operator." 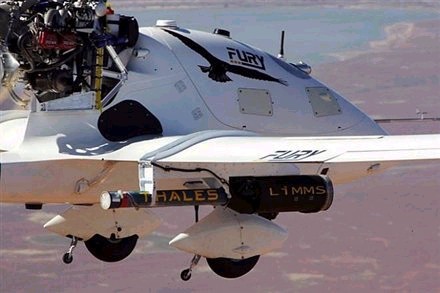 Two potential LMM aerial launching platforms are already being tested, the BAE Systems Fury armed/weaponized UAS/UAV and the Schiebel CAMCOPTER S-100 autonomous unmanned rotorcraft a.k.a. unmanned mini-helicopter. Both aircraft have been outfitted with pairs of LMMs. As of this writing, DefenseReview is only aware of a static live-fire test being conducted. If an aerial launch of the LMM has been peformed, we’re unaware of it.

Fury is basically the armed reconnaissance/close-air-support version of BAE’s Herti UAS/UAV, and the Camcopter S-100 autonomous umanned helicopter/rotorcraft is a slick-looking VTOL platform that, according to the Schiebel website, "can be programmed to fly an autonomous mission profile via a simple point-and-click graphical user interface, or can be directed manually. In both modes, the aerial vehicle is automatically stabilized via redundant Inertial Navigation Systems (INS). Navigation is accomplished using redundant Global Positioning System (GPS) receivers."

David Crane started publishing online in 2001. Since that time, governments, military organizations, Special Operators (i.e. professional trigger pullers), agencies, and civilian tactical shooters the world over have come to depend on Defense Review as the authoritative source of news and information on "the latest and greatest" in the field of military defense and tactical technology and hardware, including tactical firearms, ammunition, equipment, gear, and training.
Previous 6.8x45mm Kramer Urban Combat Cartridge (UCC) for Urban Warfare Ops
Next Aimpoint BR8 Fire Control System (FCS) for Tactical Small Arms and Light Weapons

Russian Avangard Hypersonic Glide Vehicle Flies at Mach 27, and Can Make ‘Sharp Maneuvers’ around Opponent’s Defenses, according to Claims