All photographic images contained in this article were taken by
DefenseReview.com, and they are the exclusive property of
DefenseReview.com. DefenseReview.com owns the copyright on these photos. All photos were shot with a 7.2-megapixel Sony Cyber-shot digital camera (Model #: DSC-P150).

While we’re on the subject of MRAP vehicles (Mine Resistant Ambush Protected vehicles) on display at AUSA Winter Symposium and Exhibition 2007, we should probably also discuss the new Golan (Category II) MRAP vehicle. The Golan armored vehicle, billed as a "next-generation combat vehicle" is manufactured and marketed in the U.S. by Protected Vehicles, Inc. (PVI) (Charleston, SC). However, the vehicle was designed and developed with the help of Rafael Armament Development Authority (Haifa, Israel) (maker of many interesting things) and Battelle Memorial Institute (Columbus, Ohio). It would seem logical that Protected Vehicles Israel (PVI) is manufacturing and marketing the Golan armored vehicle (specifically, a wheeled armored vehicle, as opposed to a tracked armored vehicle) in Israel (unconfirmed/unverified).

Protected Vehicles, Inc. (PVI) is an interesting story in several respects. First, its CEO, president, and founder is Garth Barrett, who is the former Chief Technology Officer (CTO) for Force Protection, Inc. (FPI), which manufactures the Cougar 4×4 (Category I) and 6×6 (Category II) MRAP vehicles, the Buffalo mine clearance vehicle (a.k.a. "The Claw"), and the new Cheetah armored vehicle (and JLTV program contender). This is a prime example of employee one day, prime competitor the next. Second, PVI has only been around since fall 2005 (incorporated in Delaware.), and they’re already a major player in the MRAP game, and going head to head against Force Protection and the other MRAP contractors. Pretty impressive.

The Golan MRAP vehicle is interesting in its own right. Immediately, the vehicle… 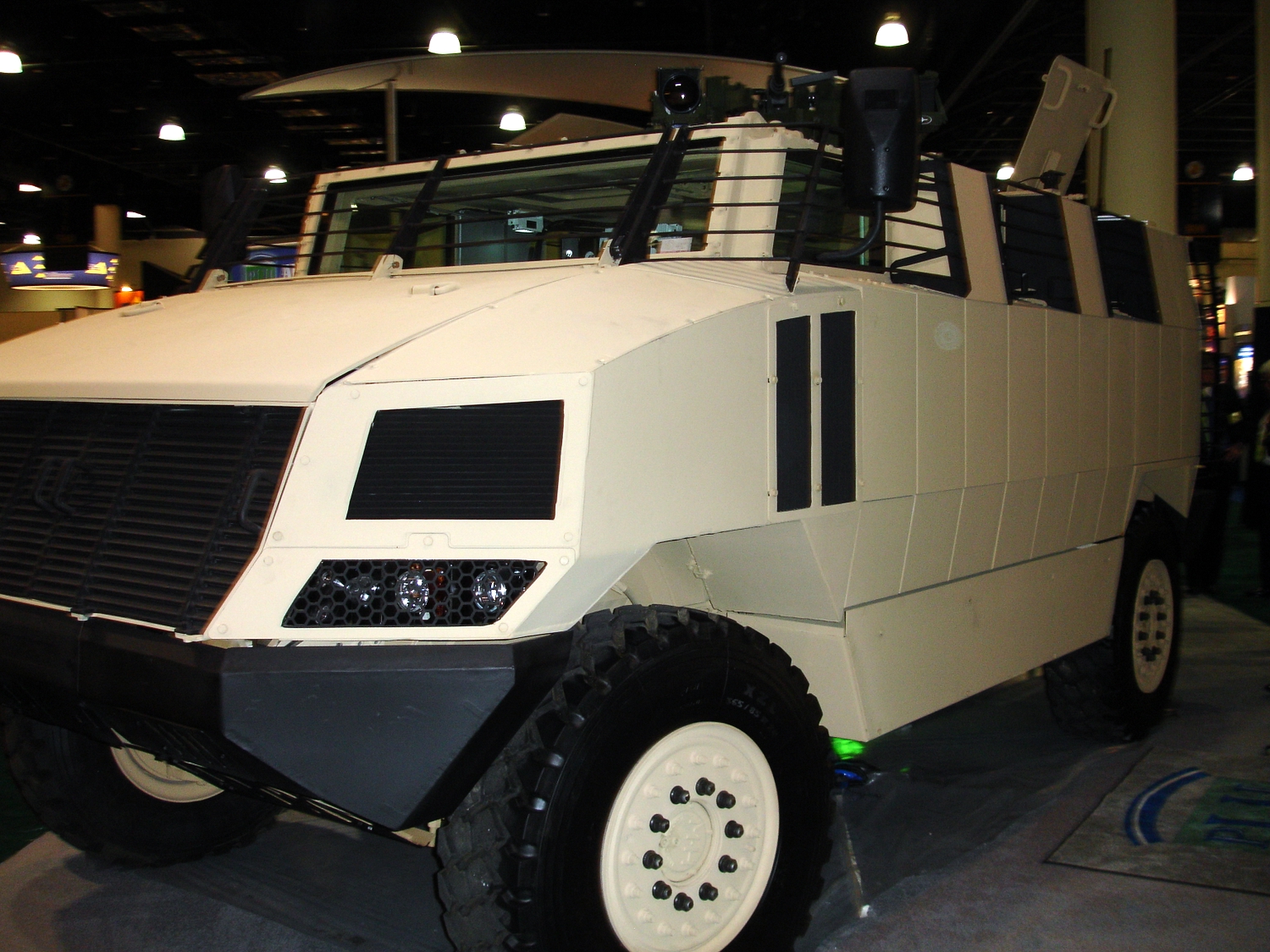 looks different than the FPI Cougar and BAE Systems RG33 Series MRAPs. It has a smoother and more futuristic look than the other vehicles, uses flat armor tiles (modular armor system) on the sides, and sports slat-type armor over the bullet-resistant windows. The four crew side windows (two windows on each side) feature firing ports. Weapon station’s up top, just like on other MRAP vehicles.

The armor tiles can be hot-swapped out in the field according to the perceived small arms/light weapons threat level. It’s DefenseReview’s understanding that the Golan’s modular armor tile system can even utilize Insensitive Explosive Reactive Armor (IERA) tiles for protection against RPGs (i.e. RPG-7V) and other shoulder-launched (a.k.a. shoulder-fired) single-warhead anti-armor unguided missile threats. However, it should perhaps be noted that even reactive armor will not stop tandem-warhead threats like the RPG-29V and various and sundry shoulder-launched precision-guided missile systems currently in use with groups like Hezbollah (a.k.a. Hizbollah). 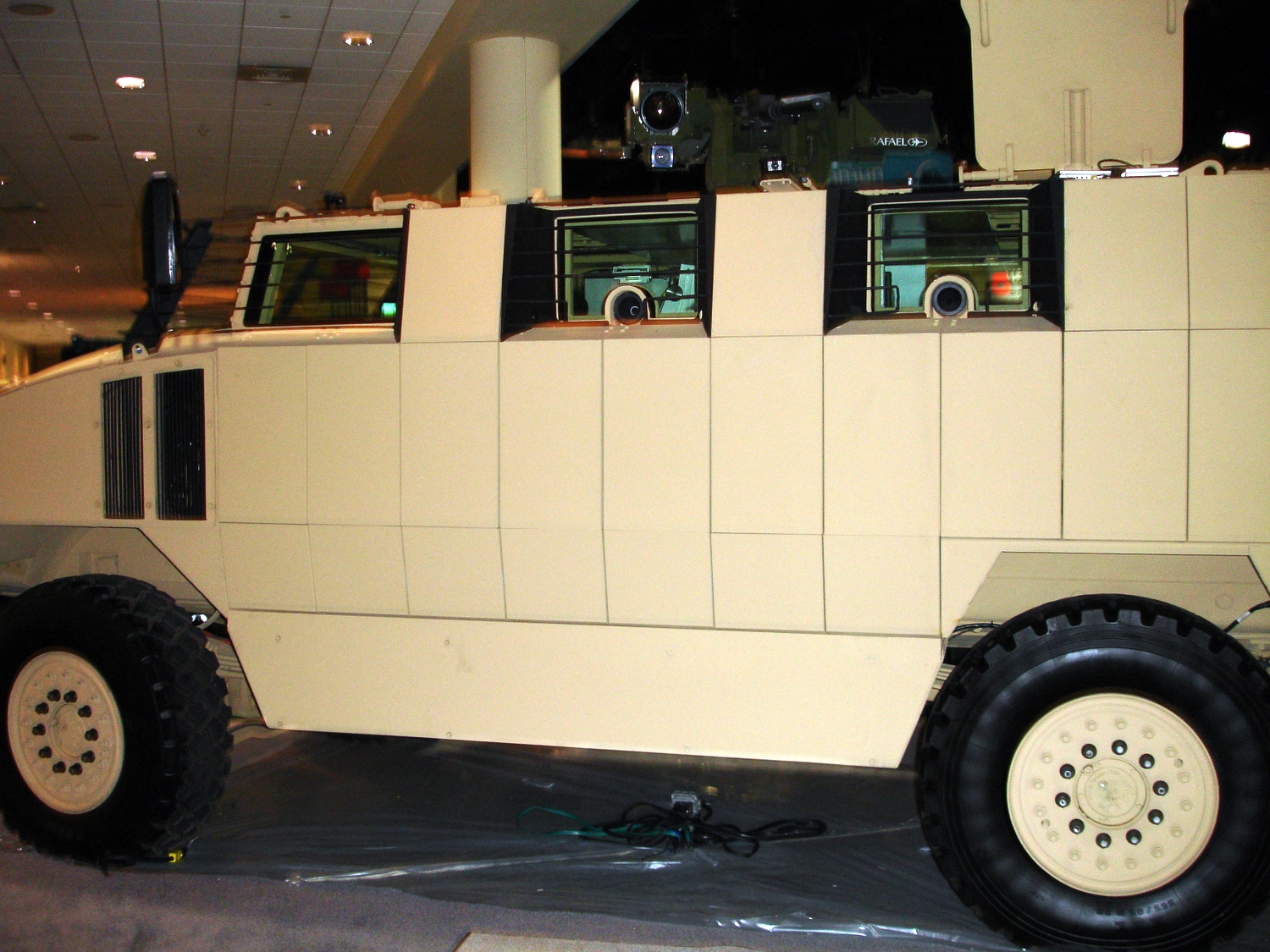 Anyway, while DefenseReview did get to go inside the Golan MRAP vehicle (Category II), we weren’t allowed to take any pictures of the vehicle’s internals. PVI CEO Garth Barrett was polite and courteous to us, and posed for a picture in front of the display vehicle (below-right), which we appreciated. However, overall, our experience at Protected Vehicles, Inc. booth was not as quite as enjoyable as our experiences at the General Dynamics Land Systems (GDLS) and BAE Systems. The GDLS and BAE Systems personnel, particularly the Advanced Ground Mobility Vehicle (AGMV) and RG33 Series program managers, were very enthusiastic and active about taking us through the vehicles and explaining things to us, making us feel very welcome. Both GDLS and BAE really went out of their way to assist us and take care of us at their respective booths (for which we were grateful). By contrast, at the PVI booth, it seemed that they were somewhat indifferent to our presence. This includes Drew Felty, program manager for the Golan. There was one exception to this, and that was Brigadier General David Engel (IDF, Ret.), and now President of Protected Vehicles, Israel (Israeli branch of PVI), whom we met inside the display Golan vehicle. BG Engel was exceptionally warm and personable to us, and told us to give him a call if/when we are ever in Israel. Defense Review will take him up on it, if/when we go there. Anyway, nice man.

Bottom line, PVI didn’t make the same effort as the other companies’ personnel did (as described above). Ever get the feeling that someone’s just sort of tolerating you? That was the overall impression we got with the PVI staff (again, with the exception of BG David Engel, President, PV Israel). Part of the reason for this may be that PVI is such a young company (approximately a year and a half old), and they don’t have even close to the same level of show/exhibition experience as the much larger and more established GDLS and BAE Systems. It’s also possible that they didn’t realize who we were. Finally, they’re perhaps just a secretive company, in general. We’ll give them the benefit of the doubt. In any case, it’s a shame, because the Golan is an interesting vehicle, and we would have liked to have learned more about it at the show. In addition, we’re fans of Rafael, PVI’s teaming partner on Golan. They make some serious products, over there, in Israel. Defense Review will be writing about some of Rafael’s products displayed at the show (AUSA).

Ultimately, though, how we were handled at the PVI booth isn’t what’s important. What is important is whether or not the Golan wheeled armored vehicle will get the job done in the Sandbox and save American and Israeli lives. Based on the seeming considerable expertise behind the vehicle’s design and development, it most likely will. Time (and mine/IED and small arms/light weapons attacks) will tell.

PVI recently received a LRIP (Low Rate Initial Production) order for 60 Golan Category II MRAP vehicles and 100 PVI-ALPHA MRAP vehicles (Category I). 60 Golan armored vehicles cost the U.S. military $37.4 million ($34M). Airborne Combat Engineer (ACE) did the math on that, and figured out that the per unit cost is $623,000 ($623K) each.

Oshkosh Truck is PVI’s teaming partner on production of the PVI-ALPHA armored vehicle. 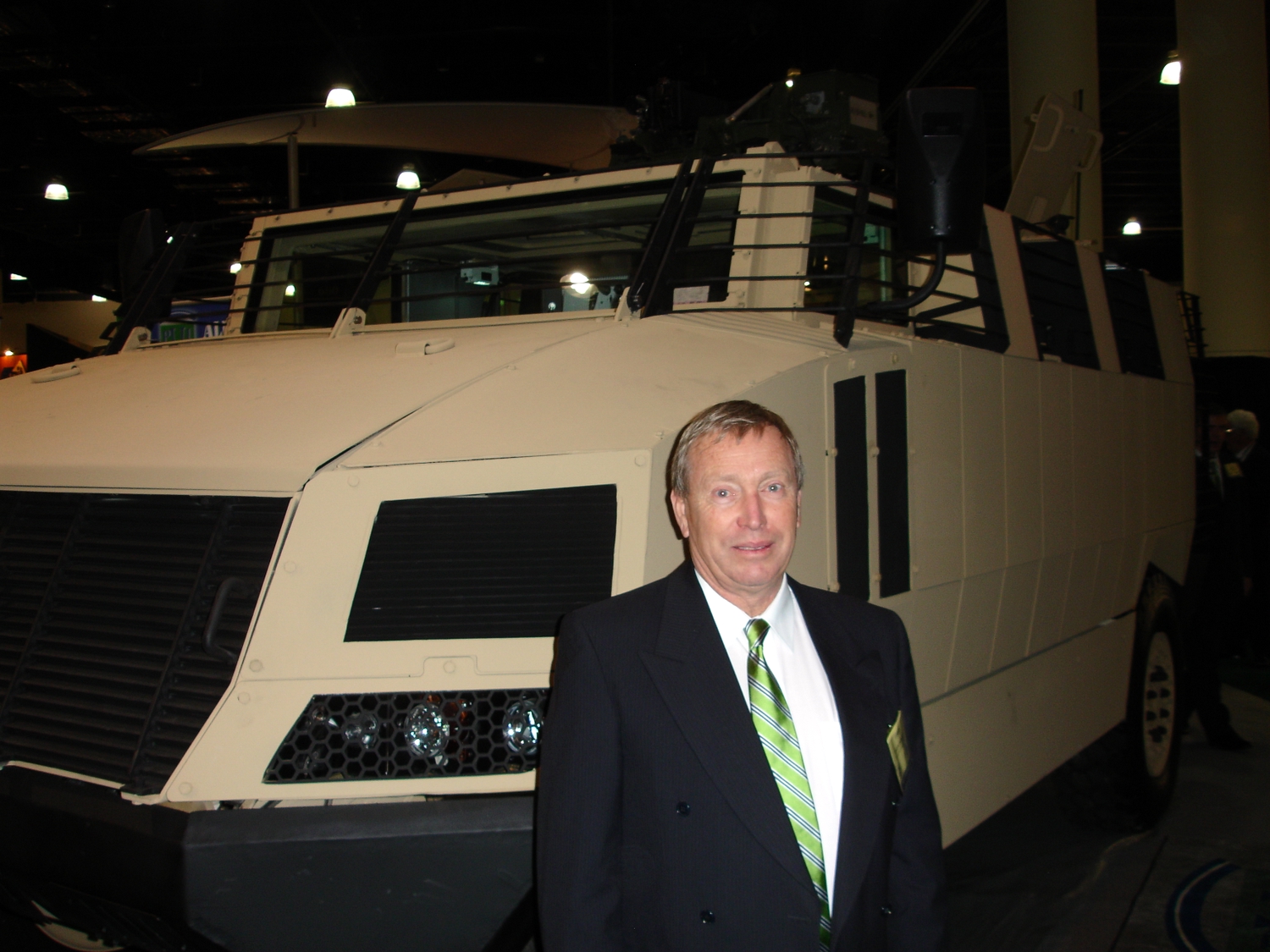 David Crane started publishing online in 2001. Since that time, governments, military organizations, Special Operators (i.e. professional trigger pullers), agencies, and civilian tactical shooters the world over have come to depend on Defense Review as the authoritative source of news and information on "the latest and greatest" in the field of military defense and tactical technology and hardware, including tactical firearms, ammunition, equipment, gear, and training.
Previous Photo: AH-64D Apache Longbow Attack Helicopter Takes-Off from AUSA
Next AAI Lightweight Small Arms Technologies (LSAT) Prototype on Display at AUSA