These days, when it comes to thermal/IR (Infrared) and night vision sensors and imagers, sensor fusion for multi-spectral vision is the name of the game. Sensor fusion, or fused sensors (fuzed sensors), means that a thermal/infrared (IR) image and an image intensification (I2) image (i.e. night vision image) are overlayed, so the viewer sees a multi-spectral image. The thermal/IR sensor allows him to see in complete darkness and in any environment (through smoke, fog, etc.) while the the I2 sensor provides him with clear, sharp green-tinted picture, as well as backup night vision–the best of both worlds, so to speak.

While DefenseReview was at AUSA Winter Symposium 2007 earlier this year, we came across an interesting… 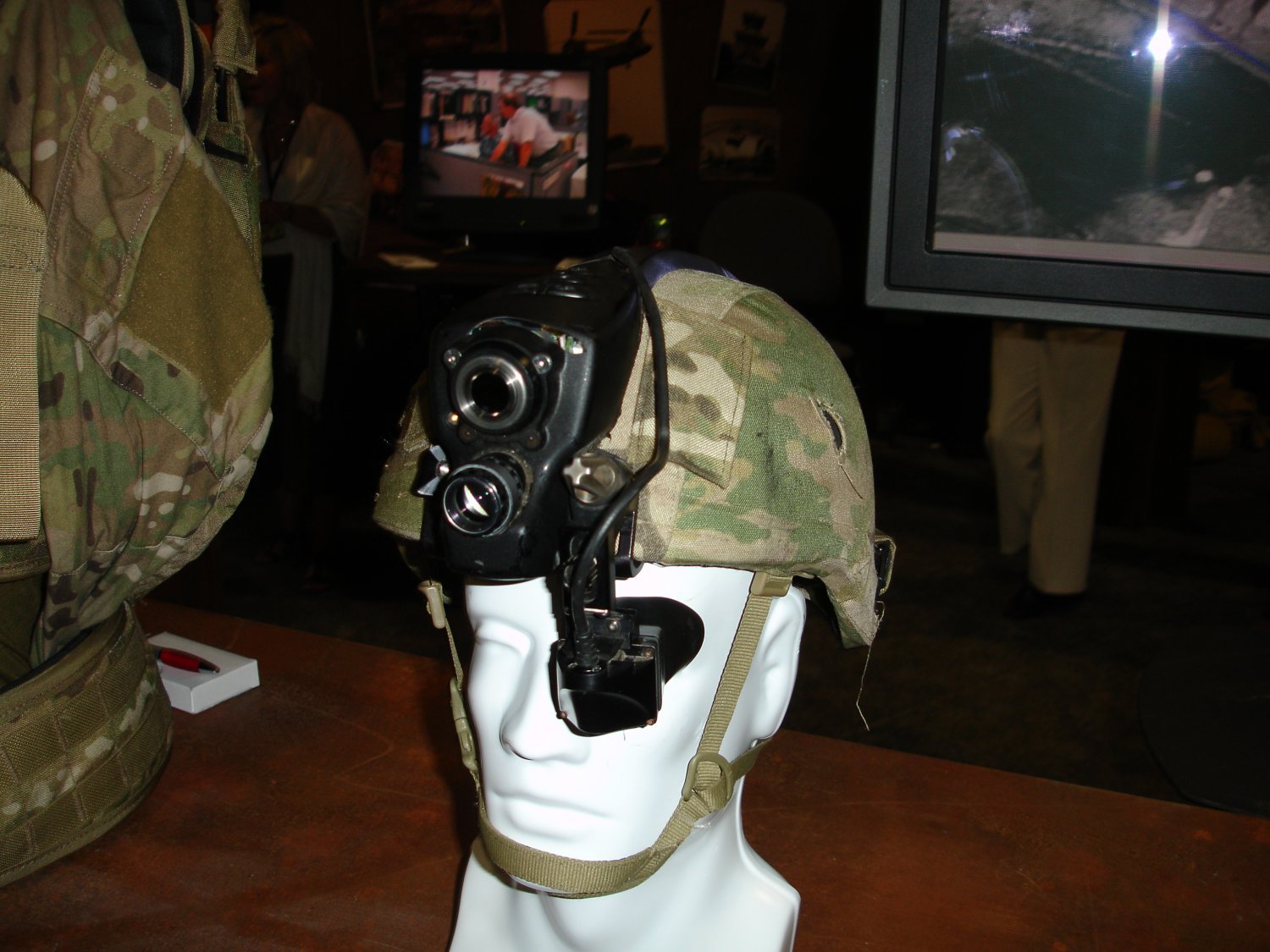 sensor-fusion helmet-mounted display (HMD) called the Future Force Warrior Headgear System (FFWHS) a.k.a. Integrated Headgear System (IHS). Designed and developed by Rockwell Collins for the U.S. Army Future Force Warrior (FFW) program, the FFWHS is basically a Land Warrior-compatible ENVG (Enhanced Night Vision Goggle) system, except for the "goggle" element. Instead of a traditional goggle in front to the eyes, the enhanced fused video a.k.a. enhanced fused imagery comes by way of a digitally-fused long-wave infrared camera and high resolution image intensification (I2)/near-infrared camera housed in the FFWHS, which is mounted on the the soldier’s Advanced Combat Helmet (ACH). The fused image/video received by the helmet-mounted cameras is then fed down to an occluded-display monocular. 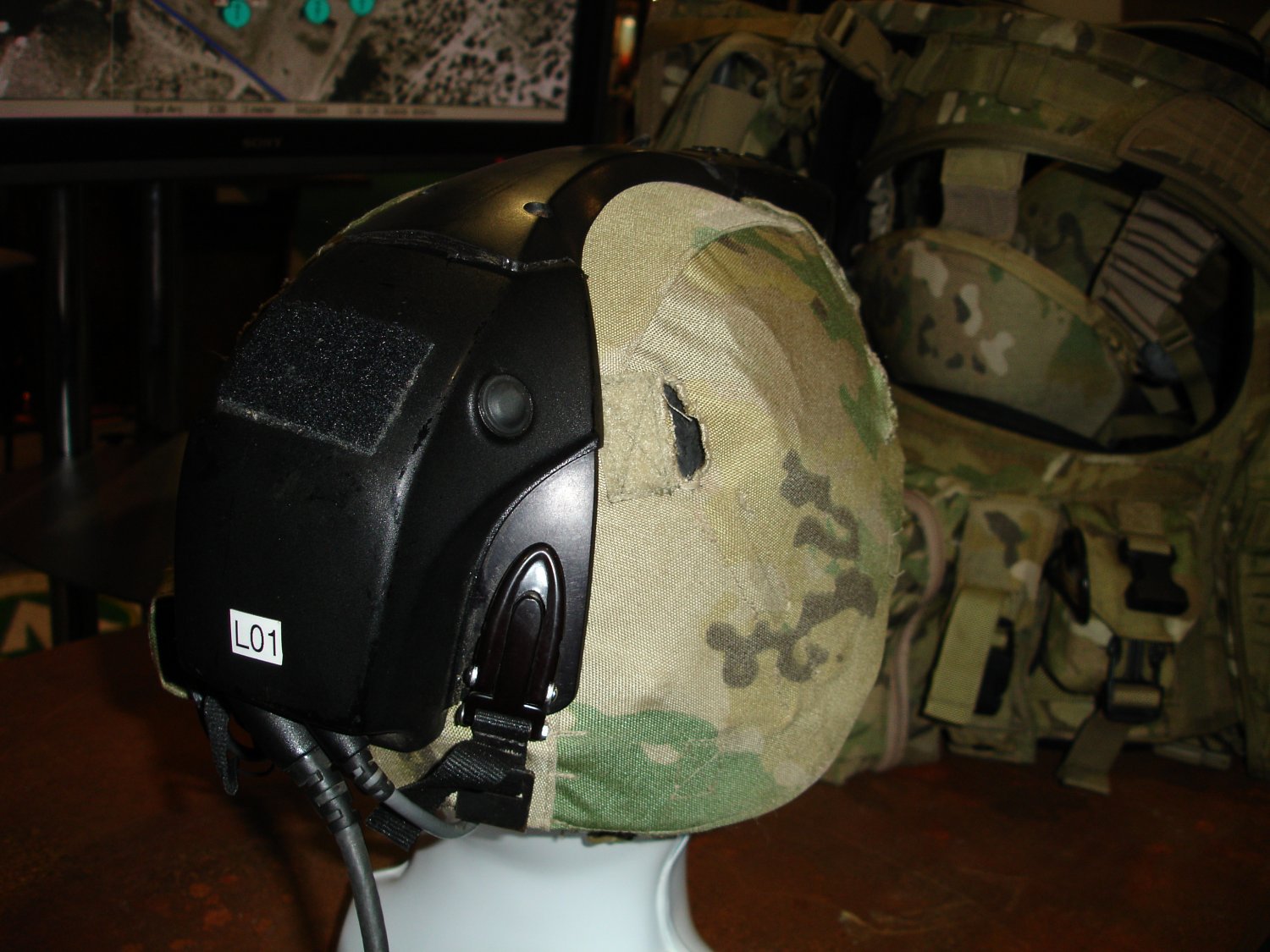 While the Rockwell Collins Future Force Warrior Headgear System is interesting, it’s Defense Review’s opinion that it’s too heavy and bulky in it’s present state. The FFWHS weighs 2.2 lbs by itself. That’s 2.2 pounds on top of the 3+ lbs ACH (Advanced Combat Helmet), for a total of 5.2 or more pounds, which is too much to be carrying around on your head for long periods of time. That said, it’s our understanding that the FFWHS is really just a technology demonstrator, so further technology development and refinement is expected. Perhaps in a few years, Rockwell Collins will have a practical version that’s ready for prime time.

Speaking of night vision systems (NVS) a.k.a. night observation devices (NODs), there are two technologies out there that DefenseReview finds intriguing. The first is the Tenebraex ColorPath CCNVD Color Capable Night Vision), which is just what it sounds like, colorized night vision. According to the Tenebraex Corporation website:

“The ColorPath™ CCNVD (Color Capable Night Vision Device) uses one (1) standard, green image intensifier tube (such as MX-10160A or similar) to create a true, full-color image for the user. The system is also mechanical and filter based—not computer in the loop. This means that compared to other color systems, it is real time, unaffected by temperature, light weight, power frugal and low cost. 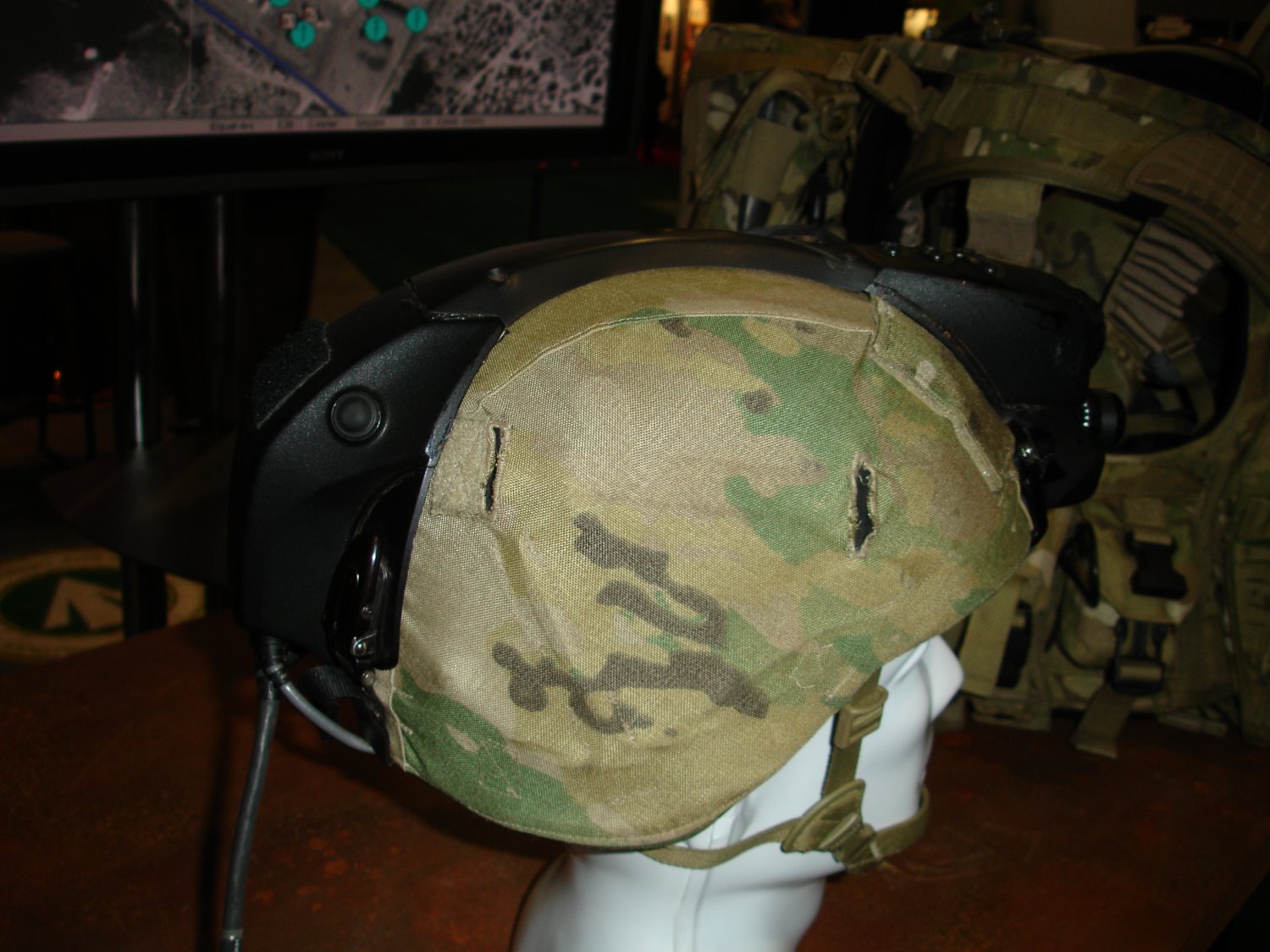 The CCNVD can generate a color image down to quarter-moon light levels, At lower light levels, with the Model OP, a simple twist of a knob moves the ColorPath technology from the optical path, leaving the user with a standard, monochromatic green night vision device with all the overcast moonless night performance that he had before.”

Some of the advantages of being able to discern colors at night are obvious, while others may not be. Fortunately, the Tenebraex website lays them right out for you:

Smoke Markers
• color smoke can be used at night,
maintaining light discipline in LZs or extractions 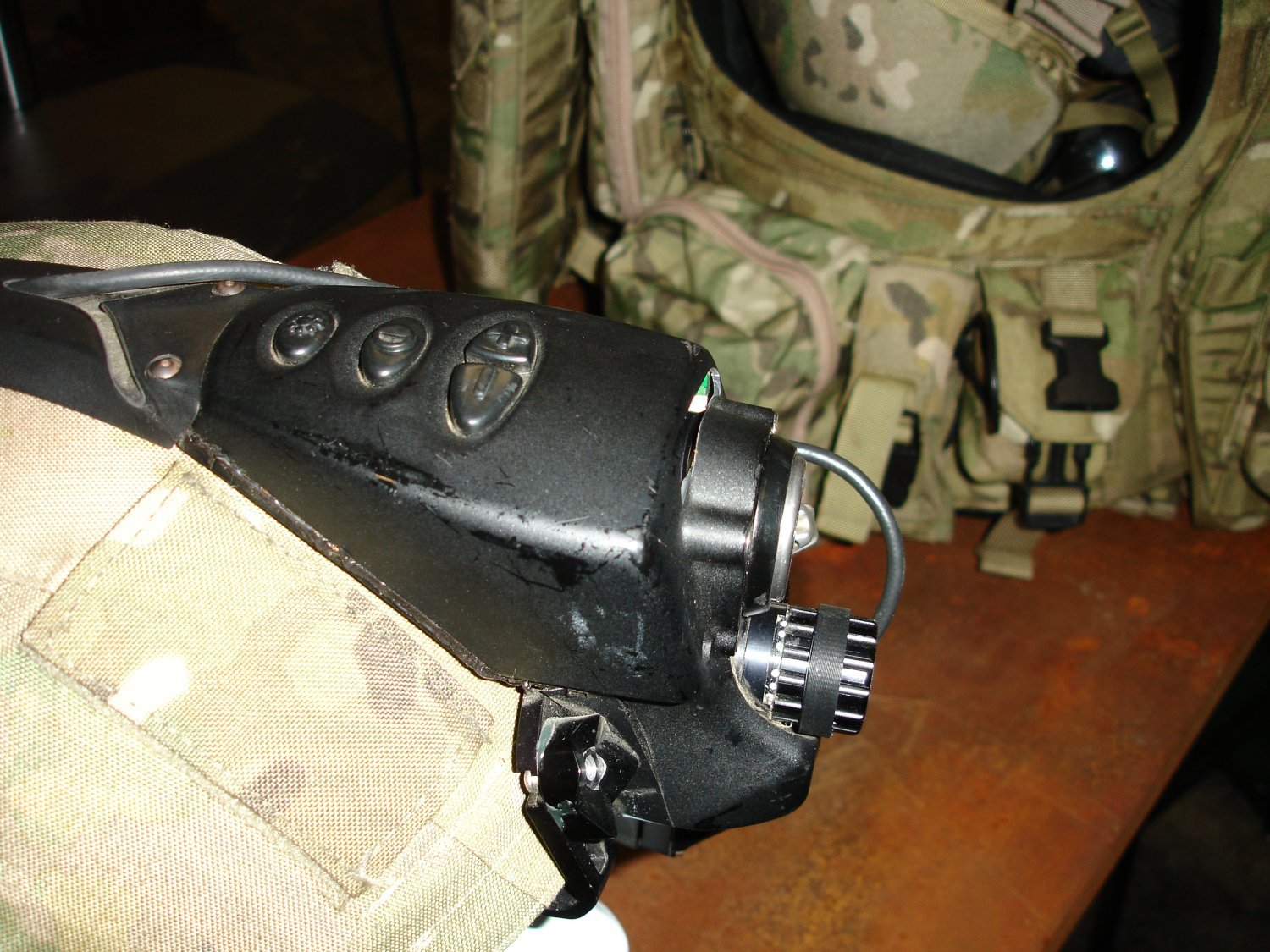 Earlier this year, Tenebraex got a bit of press on the ColorPath color night vision tech from various websites (including some owned by print publications), as if it were something new. It isn’t. DefenseReview first read about the technology (ColorPath) in August 2001 in Armed Forces Journal International (AFJI), which is now just Armed Forces Journal (AFJ). So, the technology is at least six (6) years old, and (to our knowledge) AFJ deserves the credit for breaking the story on it. Of course, it would seem logical that the technology has progressed/evolved a bit since then, but our point is that it’s been around awhile.

The second intriguing technology that’s worthy of mention is Xenonics’ SuperVision Digital Night Vision tech. The company (Xenonics Holdings) bills the technology as a "paradigm shift in night vision technology." According to the Xenonics website, "SuperVision utilizes the most sensitive and sophisticated [digital] CCD sensor in the world to capture invisible moonlight and digitally process the information, in the form of pixels, into a sharp, clear picture on a high-resolution display."

It would be interesting to see the result of Tenebraex and Xenonics getting together and combining the ColorPath CCNVD tech with the SuperVision Digital Night Vision tech, and then fusing the resulting advanced digital color night vision sensor/camera with an advanced state of the art thermal/IR sensor/camera that feeds to a see-through optical display (monocular or binocular), provided that Xenonics can overcome the combat-relevant problems outlined by Victor Di Cosola (of Tactical Night Vision Company) in his article on the SuperVision digital night vision tech (published by AR15.com on July 21, 2007). Now, that would be something, especially if you could simultaneously reduce the size by at least 50% and the weight by at least one (1) pound. They should also try to get the combat helmet/mounting platform down to 2 lbs. or less, like the Rabintex "Attack" Helmet, which is, to DefenseReview’s knowledge, the lightest combat helmet (ballistic helmet) in the world. Then you’d be in business. A binocular display would give the infantry warfighter the additional advantage of depth perception, which could also be advantageous.

However, we’ll probably be waiting for awhile on all that.

Addendum 1/09/08: AR15.com has a rather thorough and interesting review of the Xenonics Supervision tech by Victor Di Cosola of Tactical Night Vision Company. We suggest you read it here. The following statement by Mr. Di Cosola comes from "Final Thoughts" section of the article:

"I can envision some outrage and loud arguments over what some would appear to be overly harsh results and comments. To those who may not understand, I will attempt to explain once again. In all the products I use and offer, my primary criteria is that of “mission critical” gear, i.e. would I depend on this gear in my professional career or would I recommend it to someone on the “sharp edge?” As such, SVM [SuperVision Digital Night Vision Monocular] falls short of my expectations. That is not to say that there is no market for SVM or that it does not have potential. I think presently, it will find its place in the recreational field and general outdoors with the end users who are far less demanding then most of us here on the AR15 NV Forum, or folks with critical missions at hand. (I think there are a lot more of them out there then there are of us folk ). It is my opinion that in its current design, the SVM is simply not suited for us who depend on our gear for critical mission requirements and demand the very best performance under any conditions."

David Crane started publishing online in 2001. Since that time, governments, military organizations, Special Operators (i.e. professional trigger pullers), agencies, and civilian tactical shooters the world over have come to depend on Defense Review as the authoritative source of news and information on "the latest and greatest" in the field of military defense and tactical technology and hardware, including tactical firearms, ammunition, equipment, gear, and training.
Previous NRI AutoCopter Hyper-Lethal Armed Mini Robotic Attack Helicopter/Gunship with Turbine Engine Debuts
Next Low-Profile Advanced Helmet Cam System for Tactical Operations and Training