This, of course, is good news, as an integral rail is always preferable to a screwed-on rail. However an integral rail doesn’t solve the reported reliability problems caused by Kimber’s Series II Safety system, which the author believes can potentially get an operator/end user killed in a gunfight.

The author has heard from several sources that the Series II safety system is unreliable under adverse conditions, or even intense range/training environments. One of my sources recently informed me that…

he’s aware of these Series II Kimbers going "click" instead of "bang" multiple times during tactical shooting courses. Unacceptable. Gunsmith Hilton Yam, a man who is highly knowledgable about firearms in general, and the 1911 pistol in particular, is also not a very big fan of the Kimber Series II safety system. In fact, no serious pistolero that I know of is.

Recently, Kimber won a contract to equip the U. S. Marine Corp’s new USSOCOM-compliant MARSOC Det. 1 unit with brand new 1911’s. Well, guess what? The guns that Kimber will be supplying to that rather elite unit will not contain the Series II safety system. Why not, you ask? From the reports DefRev has received, the boys at USMC MARSOC Det. 1 didn’t trust it. And, if USMC MARSOC Det. 1 personnel don’t want it in their guns, chances are there’s a good reason. Those gentlemen, all selected out of Marine Force Recon, know their weaponry.

On a tactical/self defense gun, you do NOT want ANY unreliable mechanism inside it. That gun has to go "bang" every single time you pull the trigger. A Kimber Series II gun might work perfectly well while it’s clean and well-lubricated, but what happens once you’ve put a lot of rounds through it and dropped it in the dirt or mud? Do you want extra things to worry about on your portable, last-ditch life insurance policy? Remember, the more parts, the more complexity, the more chance something will malfunction. That’s just how it is.

Hopefully, Kimber will do the right thing by CCW’s and LEO’s alike, and go back to the original safety system, ala Colt and Springfield Armory. Properly calibrated, it’s safe enough, and the gun will fire every time you pull the trigger.

If you’re interested in having a totally reliable (and aesthetically pleasing) 1911 built for yourself, I would advise you to check out Hilton Yam. You can view some of his work and get more information about it at his website, SignatureGrade.com. Hilton is also a moderator at TacticalForums.com.

If you need an integral rail system on your custom 1911, I would further advise you to go with the Caspian Recon frame and slide, made by Caspian Arms as your base, instead of the Kimber unit, for the reasons I’ve outlined above. You can reach Caspian by phone at 802-472-6454, or via email at [email protected]. Ask for Gary Smith. For the barrel, I recommend a Bar-Sto. Bar-Sto barrels are proven, and Irv Stone, Bar-Sto’s owner, is good people.

David Crane started publishing online in 2001. Since that time, governments, military organizations, Special Operators (i.e. professional trigger pullers), agencies, and civilian tactical shooters the world over have come to depend on Defense Review as the authoritative source of news and information on "the latest and greatest" in the field of military defense and tactical technology and hardware, including tactical firearms, ammunition, equipment, gear, and training.
Previous AcuFlex AF-1 Recoil Control System for Pre-Ban Rifles and Machine Guns.
Next Meet the New Cobb FA50(T) ”Fast Action” .50 BMG Sniper/Anti-Materiel Rifle. 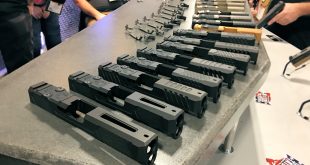