On November 3, 2008, the U.S. Marine Corps (USMC) issued a Sources Sought Notice for a "Semi-Automatic Precision Weapon System" (SAPWS) (Solicitation Number: M6785408R1011), i.e. a semi-auto sniper rifle, capable of firing the 7.62x51mm NATO (7.62mm NATO) M118 Long Range (LR) Cartridge. The SAPWS, which would essentially be the Marine Corps’ version of the U.S. Army’s M110 SASS (Semi-Automatic Sniper System), must be equipped with a silencer/sound suppressor and must be capable of mounting all available night optics and aiming devices (scopes, targeting lasers, etc.) currently in the USMC inventory.  The rifle must also be equipped with a scope and "must be capable of use with the M8541 Scout Sniper Day Scope (SSDS)."

Coincidently (or perhaps not so coincidently), LaRue Tactical recently introduced their…

Stealth OSR (Optimized Sniper Rifle) 7.62mm NATO/.308 Win. rifle/carbine a.k.a. the LT-762 rifle/carbine, which would seem to fit the bill quite nicely for the USMC SAPWS. After all, it’s a direct-gas-impingement (DGI) AR-10-type weapon sporting a full-length, free-float upper receiver with Mil-Std-1913 "Picatinny" top rail and short rails at the 3, 6 and 9 o’clock positions, the latter of which is for mounting a bipod. The upper rail is interesting in that it’s a one-piece continuous upper rail with a built-in 20 MOA cant. According to LaRue Tactical website, "this single-piece backbone provides monolith-strength with the ability to replace the upper rail with a variety of cant packages for any application,"adding to the OSR’s tactical versatility.

The LaRue Tactical Stealth OSR (LT-762) 7.62mm carbine/rifle comes standard with a 16.1-inch (16.1") LW-50 stainless steel barrel, but other barrel lengths (most likely 18" and 20") are available upon request. The base model 7.62mm Optimized Sniper Rifle comes with an A2 rifle buttstock, A2 pistol grip, two M110 SASS (Semi-Automatic Sniper System)-compatible 20-round magazines, and retails for $2,485 USD. However, the OSR can also be had in CQB (Close Quarters Battle) configuration–Defense Review’s favorite config–which appears to come with a MagPul CTR (Compact/Type Restricted) collapsible/telescoping/retractable buttstock, longer rear-situated 6-o’clock rail, and flip up front and rear BUIS (Back Up Iron Sights). Another version of the OSR appears to be available with a MagPul PRS AR10/SR25 (Precision Rifle/Sniper-AR10/SR25 Model) precision-adjustable butt stock. 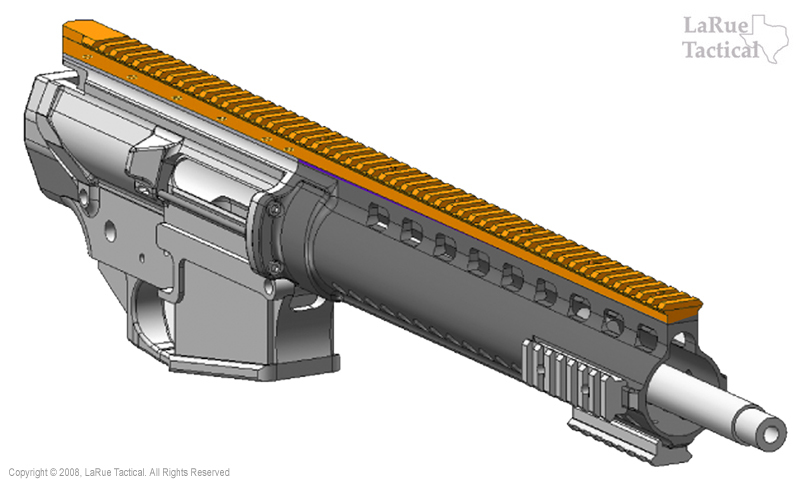 DefenseReview hasn’t run an OSR at the range, yet, but we have no doubt that the LaRue Tactical OSR rifle/carbine is a very high-quality piece of tactical equipment that will work exactly as advertised, just like every other LaRue Tactical product that we’ve ever used.

David Crane started publishing online in 2001. Since that time, governments, military organizations, Special Operators (i.e. professional trigger pullers), agencies, and civilian tactical shooters the world over have come to depend on Defense Review as the authoritative source of news and information on "the latest and greatest" in the field of military defense and tactical technology and hardware, including tactical firearms, ammunition, equipment, gear, and training.
Previous Colt ERC (Extended Range Carbine): Long-Range, Select-Fire Carbine/Rifle
Next JARD J50 Semi-Auto .50 BMG (12.7x99mm NATO) Anti-Materiel/Sniper Rifle