While DefenseReview was at SHOT Show 2009, we stopped by the Lewis Machine & Tool (LMT) booth to handle an LMT MRP (Monolithic Rail Platform) gas piston/op-rod SBR (Short-Barreled Rifle). LMT’s Gene Swanson (pictured) was kind enough to help us out. We’re fans of the MRP system, which features a quick-change barrel system (QCB system), since it allows one to quickly convert the weapon back and forth between direct-gas-impingement (DGI) and gas piston/op-rod operation and between 5.56x45mm NATO (5.56mm NATO)/.223 Rem. to 6.8x43mm SPC a.k.a. 6.8mm SPC a.k.a. 6.8 SPC calibers quickly and easily. Operation conversion just requires a barrel assembly swap. A caliber conversion requires a barrel assembly AND bolt swap.

I was actually one of the first people to test fire the LMT MRP QCB gas piston/op-rod-driven AR-15-type system. The opportunity presented itself at Knight’s Armament Co.’s (KAC) range during SHOT Show 2007. At that shoot, I was… 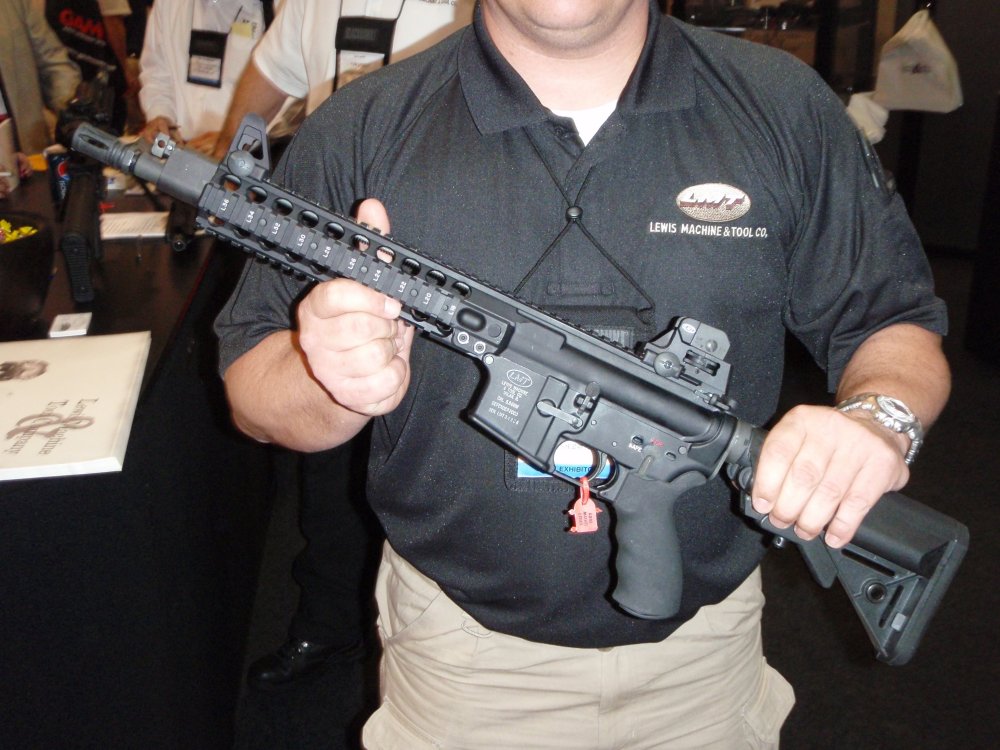 only able to fire several magazines through the weapon, but I found the system to be very smooth in operation for a gas piston/op-rod-driven system, and I experienced no malfunctions of any kind.

Defense Review has no idea how the LMT MRP QCB piston-driven system would hold up to a high-round-count test under adverse conditions (dirt, mud, sand, water, snow, ice, etc.), nor how it compares in reliability and durability to the HK416 (and upcoming HK MR556 semi-auto-only carbine version of the HK 416 being manufactured by Wilcox Industries Corp.), FERFRANS Specialties SOAR, POF-USA P-415/P-416 and LWRC M6A2/A3 gas piston op-rod AR-15 systems. As of this writing, the LMT MRP CQB gas piston/op-rod system isn’t yet combat proven, nor have we seen any data on a high-round-count/adverse condition test on it. That said (or, in this case, written), LMT has an excellent reputation for quality, and we can’t imagine that Karl Lewis would release anything to the market that was sub-par. 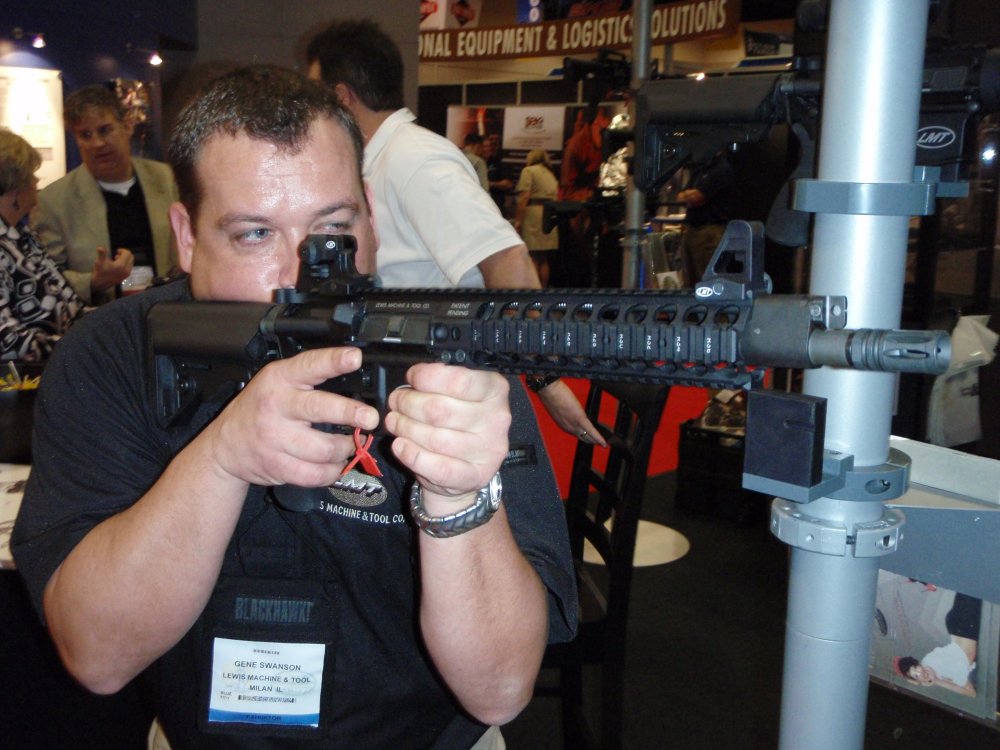 I can tell you that my experiences with the direct-gas-impingement LMT MRP QCB AR-type system has been very positive, and my professional contact, Chen Lee a.k.a. "SMGLee" is an MRP proponent–and he’s got a lot more rounds through the MRP than I do. Paul Ertsgaard and Wes Grant at MSTN (Mid-South Tactical Network) also have a lot of experience with the MRP system. DefenseReview likes the flexibility that the LMT MRP QCB system provides in terms of being able to convert quickly between direct-gas and piston-driven systems and/or between 5.56mm NATO and 6.8mm SPC calibers with just a barrel change or barrel and bolt change, although some folks may prefer to utilize a standard (non-LMT MRP) AR-15 carbine/SBR system and just swap out complete uppers (upper receivers).

If anyone has conducted, is currently conducting, or plans to conduct a high-round-count/adverse conditions test with a gas piston/op-rod LMT MRP QCB system, DefenseReview would very much like to hear from you and see the test data when the testing is ultimately finished. So, please get in touch with us at defrev at gmail dot com. 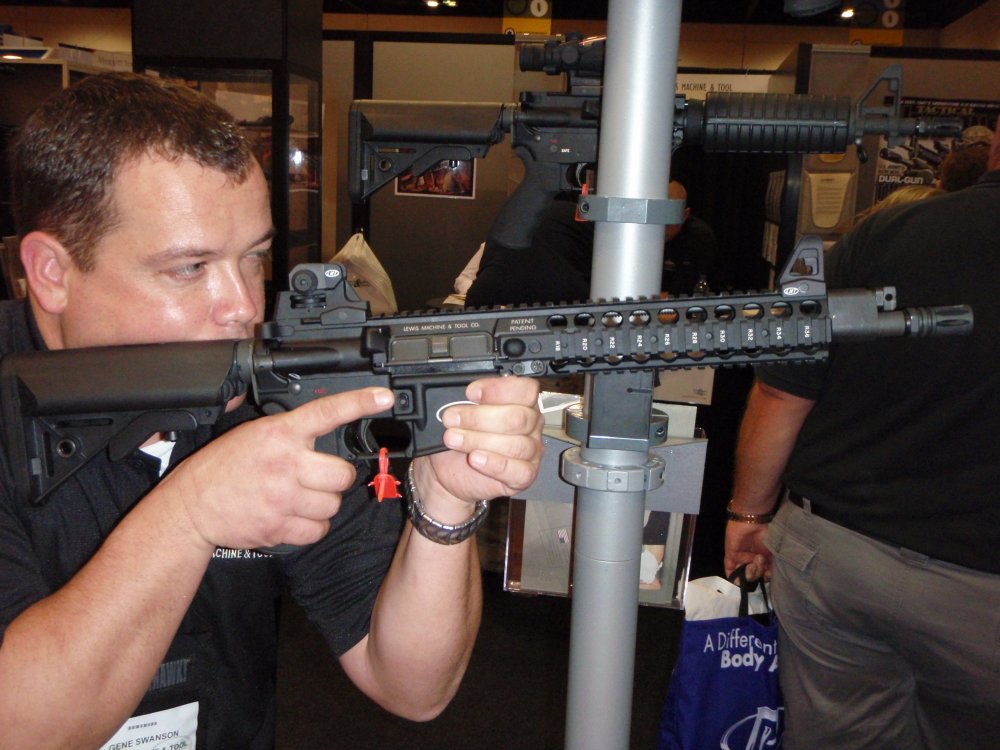 David Crane started publishing online in 2001. Since that time, governments, military organizations, Special Operators (i.e. professional trigger pullers), agencies, and civilian tactical shooters the world over have come to depend on Defense Review as the authoritative source of news and information on "the latest and greatest" in the field of military defense and tactical technology and hardware, including tactical firearms, ammunition, equipment, gear, and training.
Previous Lockheed Martin/EEStor Power-Integrated Body Armor for Infantry Warfighters
Next MagPul Dynamics Single-Point (One-Point)/Two-Point Tactical Carbine/Rifle Sling