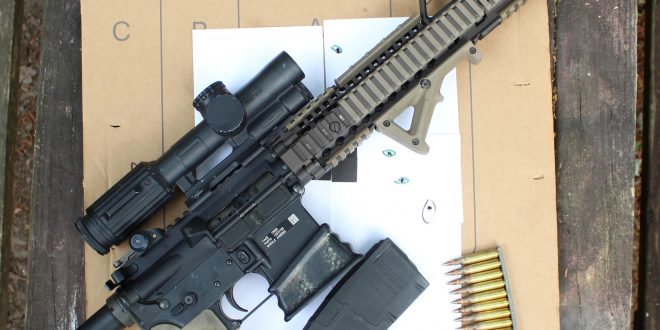 M855A1 Penetrator Ammo Accuracy: How Good Is It, Really?

I first came across the M855A1 Enhanced Performance Round (EPR) during my first deployment to Afghanistan back in 2012. At the time, M855A1 was only being issued in war zones, so none of us had any experience training with it prior to the deployment. While the penetration capability of M855A1 was pretty well documented at that point, not much was said in terms of accuracy aside from it was “better” than M855 ‘Green Tip’.

But what exactly is “better”? The Army has published a report stating that, in testing, the EPR round place 95% of shots inside an 8×8 inch box at 600 yards. However it’s rumored to have been done by Army Marksmanship Unit (AMU) members, using M16A2’s equipped with match grade barrels with a 1/8 twist. If that’s true, that’s a lot different than what most combat units use, either M4 or M4A1s with 14.5-inch chrome lined barrels with 1/7 twist. So, just what kind of real accuracy can the average soldier expect with M855A1? 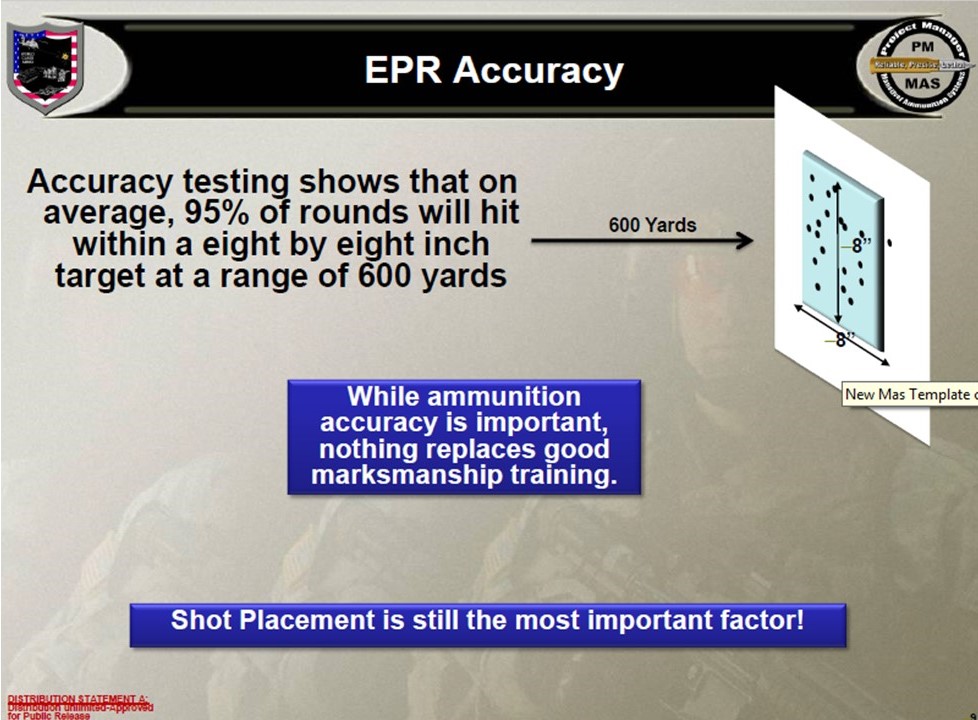 This slide, released about a year before M855A1 went into service with the Army in 2010, shows an exceptional hit factor using M855A1 at 600 yards. But is M855A1 really capable of achieving this out of your average M4 carbine?

During my 26 years in the Army, the average accuracy from M855 Green Tip I observed averaged between 2 and 3.5 MOA. So, when the military said the new EPR round was “better” (but not by how much) that did not instill much desire in me to give M855A1 a serious look. After all, being Special Forces, we had access to MK262 77gr match ammunition, which even out of a 14.5 Mil-Spec barrel, could hold around 1 MOA (Minute of Angle).

In Afghanistan, where fire fights often take place no closer than 400 or 500 meters, I wanted the most accurate ammunition I could find that would allow me the best chance of hitting threats at those extended ranges with my M4A1. Therefore, I chose to run MK262 exclusively during all three of my Afghan deployments.

I did however train with M855A1, not for long range or precision fire, but primarily for speed drills and shooting under 100 yards on paper. Now, I do have several teammates that have used it in combat and do like it, especially for its excellent performance in penetrating cover like the mud walls that are everywhere in Afghanistan. Accuracy-wise, many stated it performed well enough for combat. While I do trust my teammates opinions, it still doesn’t answer the question, “just how accurate is M855A1”?

While there are numerous published reports of the exceptional penetration capabilities of M855A1 EPR ammo, searching online, I can only find three reports concerning accuracy capabilities. The first is the previously stated slideshow from the Product Manager for Small Arms Ammunition for M855A1 stating the aforementioned 95% hits at 600 yards, created sometime before 2010.

There’s also the 2011 media day presentation from Aberdeen Proving Ground showing two Army Marksmanship Unit soldiers using a M4 carbine and a M16A2 that have shot tighter groups using M855A1 than M855 on a man size target at 400 meters. Lastly, there’s a video on YouTube from Picatinny Arsenal via Product Manager Office for Small Arms ammunition showing a shooter using it to compete at a Camp Perry National match and engage targets out to 600 yards using a M16A2 with a match grade barrel.

The shooter in the video states he was able to shoot just as well with M855A1 as any match grade ammunition. I wouldn’t have a problem with any of these examples had they been from multiple sources, and perhaps maybe some independent testing. But, all three of these examples of better accuracy are from the same source, The Product Manager Office responsible for developing the M855A1. So, what are the chances that? Of course they only have good things to say about the round. What bugs me the most in all three reports; never is the actual MOA capability of the ammunition mentioned.

Typically, any time ammo accuracy is discussed, the first thing covered is its average MOA capability. After all, that’s the accepted industry standard measurement for ammo accuracy, what size group can one expect at a given range. The slide show from 2010 states 95% hits at 600 yards, but fails to mention how many shots, what optic, and what barrel were used.

In the photo of the AMU shooters results from shooting at 400 meters, while you can estimate that it’s around a 10-inch shot group, they again fail to mention the exact size of groups they were getting. Finally, the shooter from the video states there’s really no difference, but also fails to mention the exact MOA capability. In fact, the only other mention of M855A1’s accuracy in the Project Manager’s brief stated it has; “match-like accuracy. 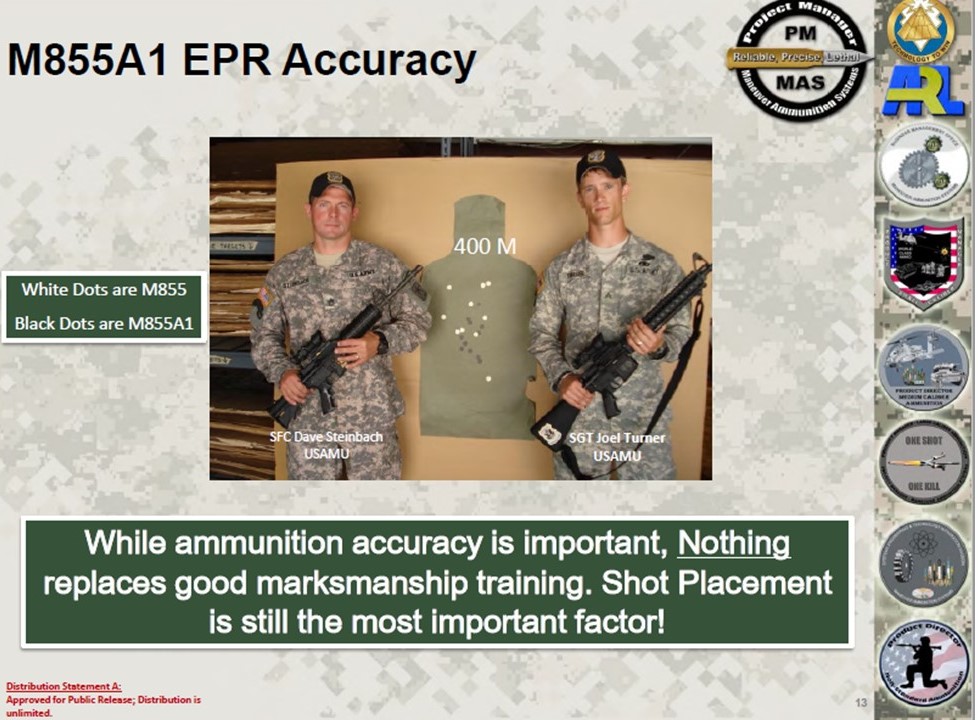 With both the M4A1 carbine and M16A2, members of the Army Marksmanship Unit (AMU) were able to shoot tighter groups with M855A1 over M855.

Military accuracy standards for the M4…What are they?

The question I will attempt to show is just how does M855A1 perform out of a military carbine with regard to MOA? Before I show my results, I must first go over what the military says is the standard for accuracy between ammunition and the M4 carbine. What you may (or may not) find surprising is that The Army contradicts themselves over what the standard is.

I was able to find the original Army specifications for the M4A1 carbine, dated January 1994. The scope of the requirements covered the manufacturing standards for the carbine. For barrel accuracy, the stated requirement was carbines keep 10 rounds in a group no larger than 1 inch vertically and 2.5 inches horizontally. So, basically 2.5 MOA out of a 1/7 twist, 14.5″ (inch) chrome lined military barrel.

I found it amusing that the document stated M855 was capable of grouping in a 3.4 by 4-inch group at 600 yards. Do the math. That’s less than 1 MOA. The only military ammunition capable of that of course is MK262, which didn’t exist during the time the document was published in 1994.

Now, here is where the contradiction comes in. In a video posted online by Anniston Army Depot (where U.S. Army M4s are serviced and rebuilt), the director states acceptable accuracy from a M4 is a no more than a 5-inch group with 10 rounds at 100 meters. That’s 5 MOA! So, shooting at a threat 500 meters away, they’re saying a 25-inch group is ok. Well, seeing how the average width of a human is 19 inches at the shoulders, that means even though your elevation and windage may be dead on, there’s a good chance you might miss just from the extreme spread of the ammo.

So, even if the Army produces quality ammo capable of tight groups, there’s a distinct possibility you could have a M4 that’s nowhere close to matching it.

For my test, I used a clone of my last issued gun, an AR with the same 14.5in, 1/7 twist, chrome lined, SOPMOD heavy barrel, the same exact one that comes issued on military M4A1s. The barrel I used was actually brand new, with only 60 rounds through it prior to my test. To give myself the best chance at shooting tight groups, I utilized a 1-6×24 power Trijicon VCOG (the same optic I used during my last combat tour). I shot seated from a table, with the AR supported by both a front and rear bag. 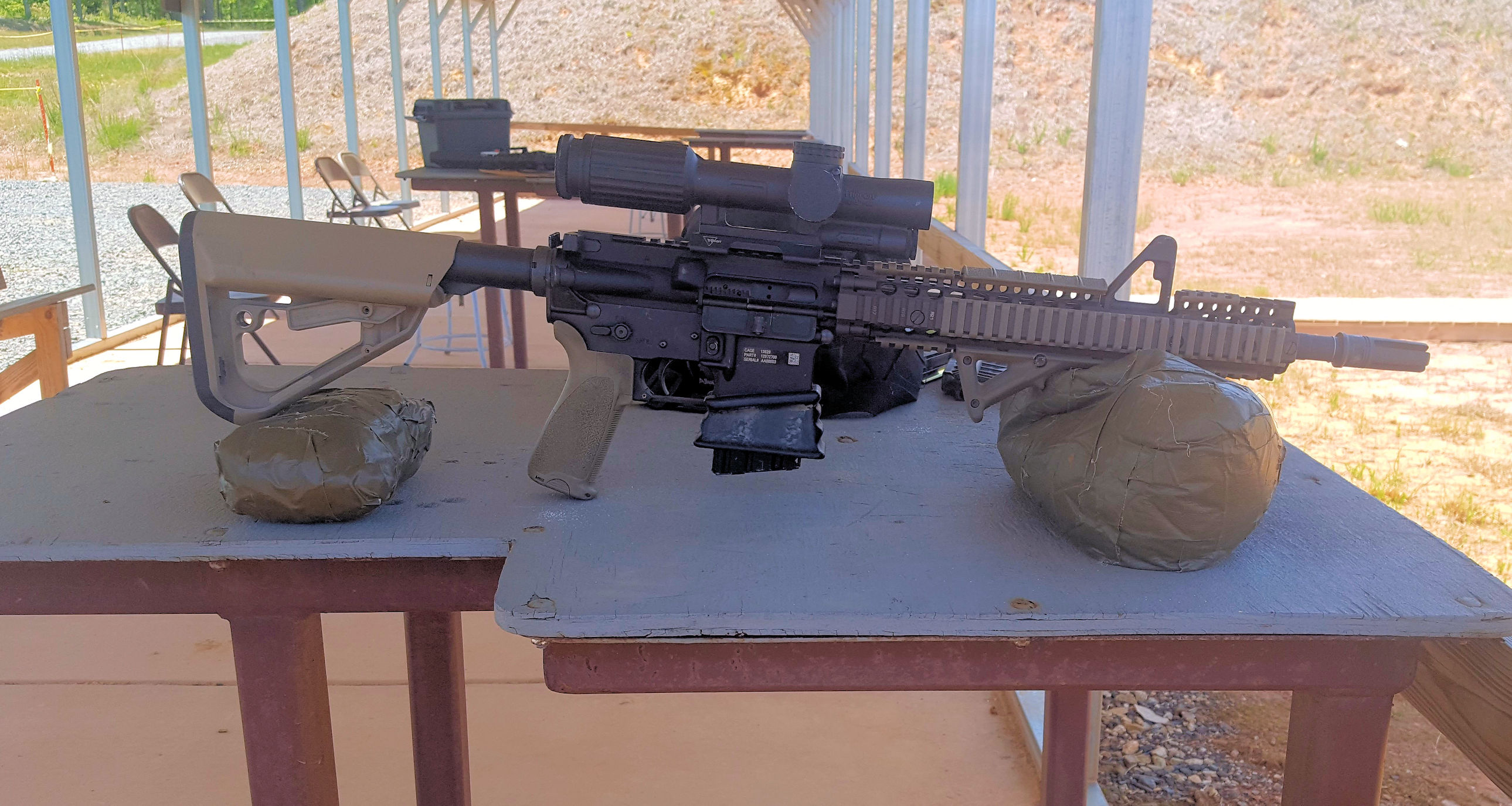 For testing, I used a clone of a M4A1 carbine with a brand new 14.5 SOPMOD heavy, chrome lined barrel, and outfitted with the same Trijicon 1-6×24 power VCOG optic I used during my last tour in Afghanistan back in 2015.

It would have been ideal to shoot out to 600 yards to see if M855A1 was really capable of getting hits in a 8x8in box but my range for this test was limited to 500 yards. I did however also shoot some M855 Green Tip, just to see how they compare. I started out at 100 yards with three-round groups, then 300 yards and 500 yards with five round groups.
*Note that with both M855 and M855A1, they came from mixed lots of ammunition. 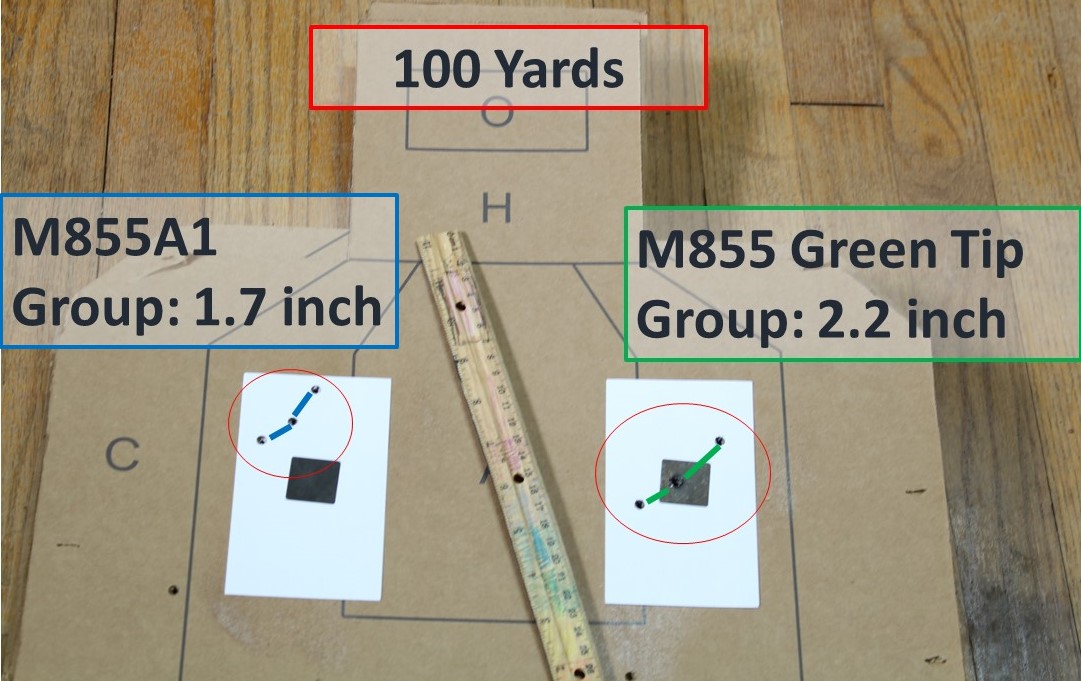 100 yards, 3-round groups; M855A1 came out at 1.7 MOA and M855 2.2 MOA. Nothing surprised me here. This is typical performance from a military 14.5 inched barreled carbine with military ammunition. 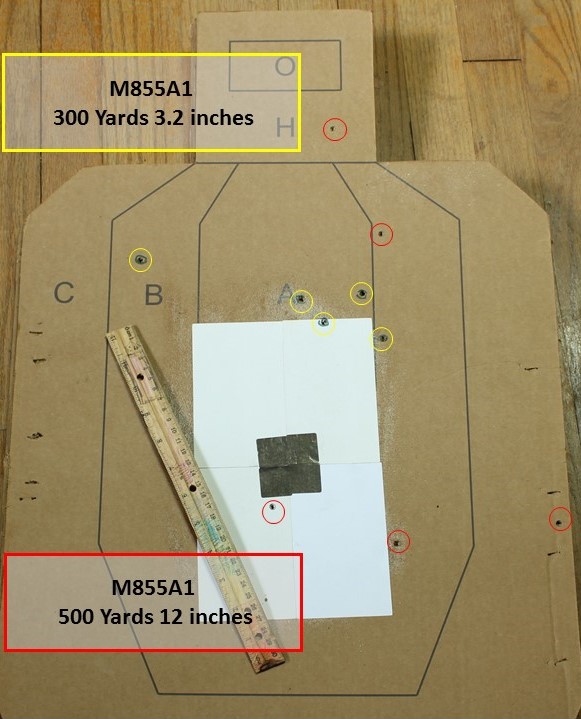 My first attempt grouping M855A1. In yellow, my 300 yard group. I did not count the extreme left hit, as I considered it a pulled shot. The 12-inch group at 500 yards comes out to 2.4 MOA. While very acceptable for military ammunition, I do not consider it “match-like” accuracy. 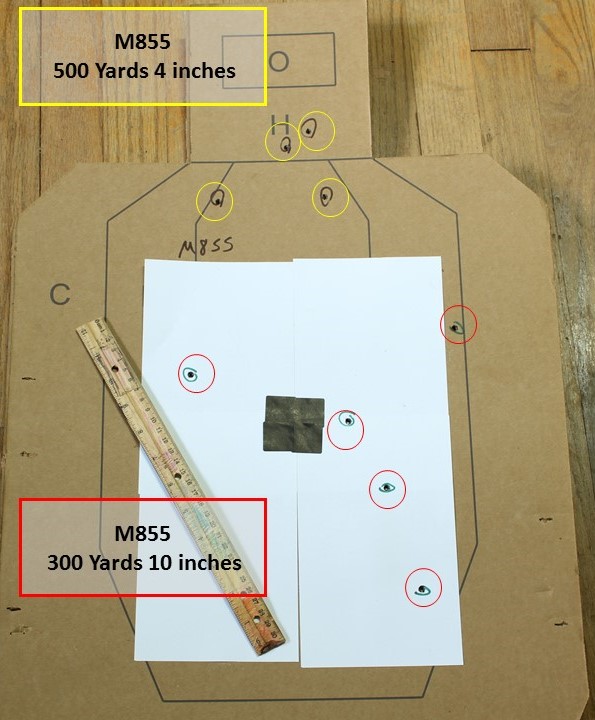 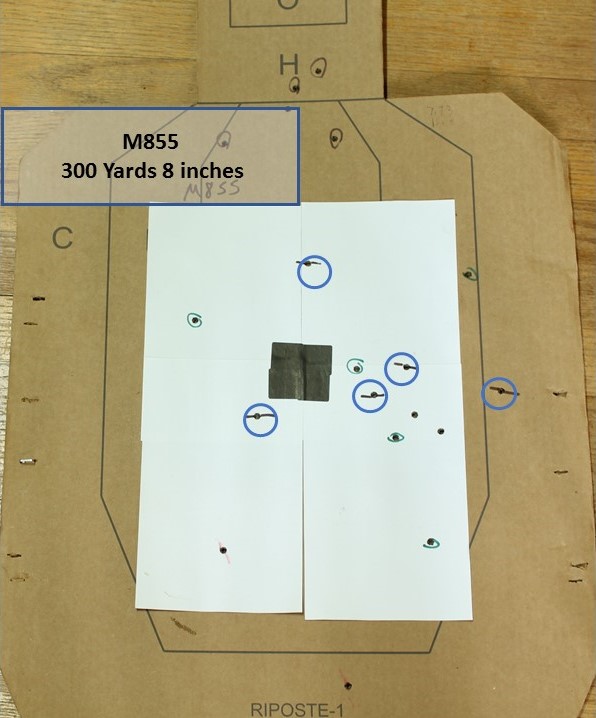 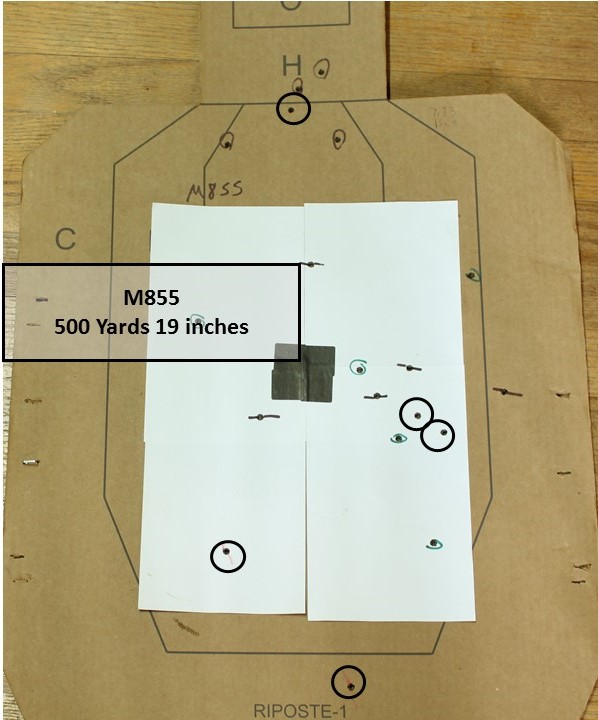 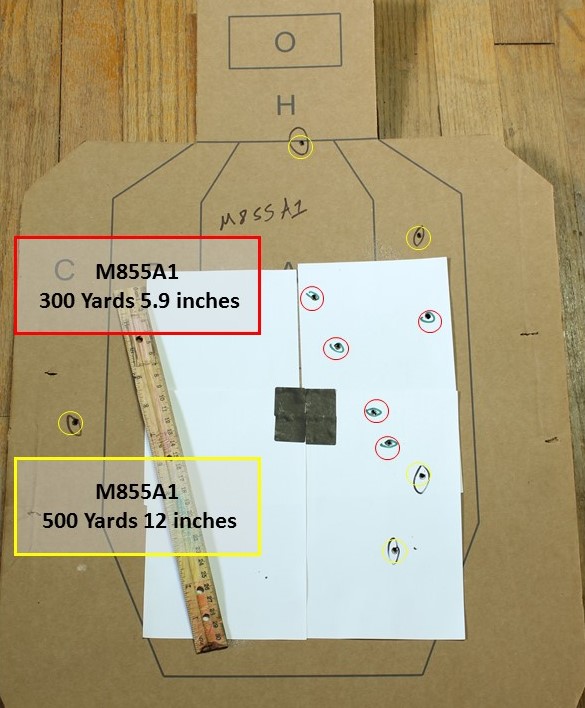 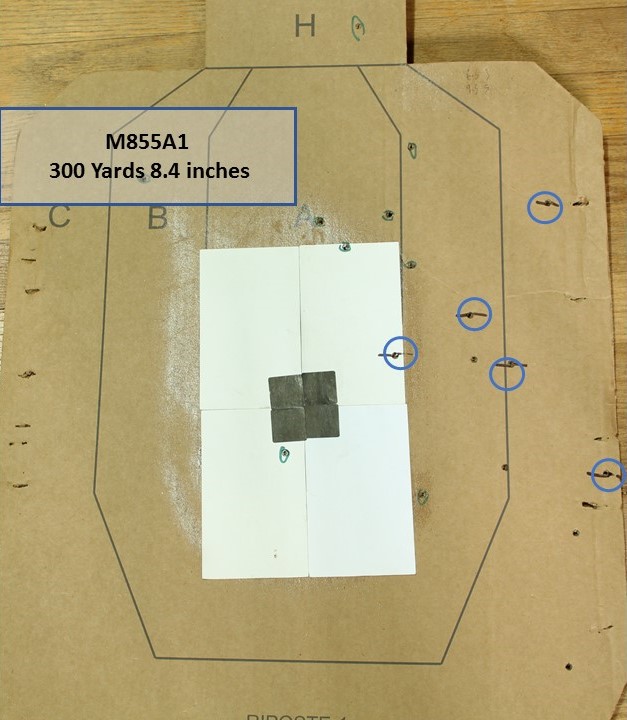 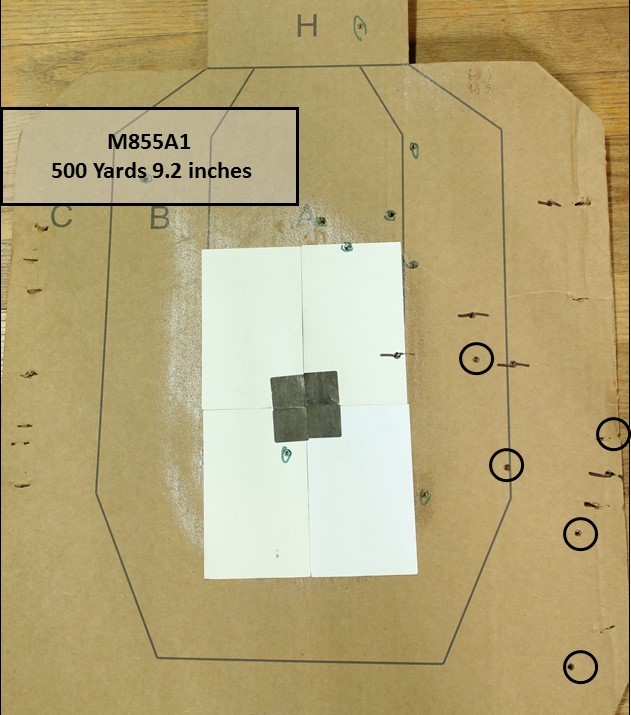 Looking at my results, even with the one super-tight, sub-1 MOA group at 500 with M855, M855A1 still averaged better MOA performance than M855 at each range. Had I shot a third string of M855, I don’t think it would have changed the results. 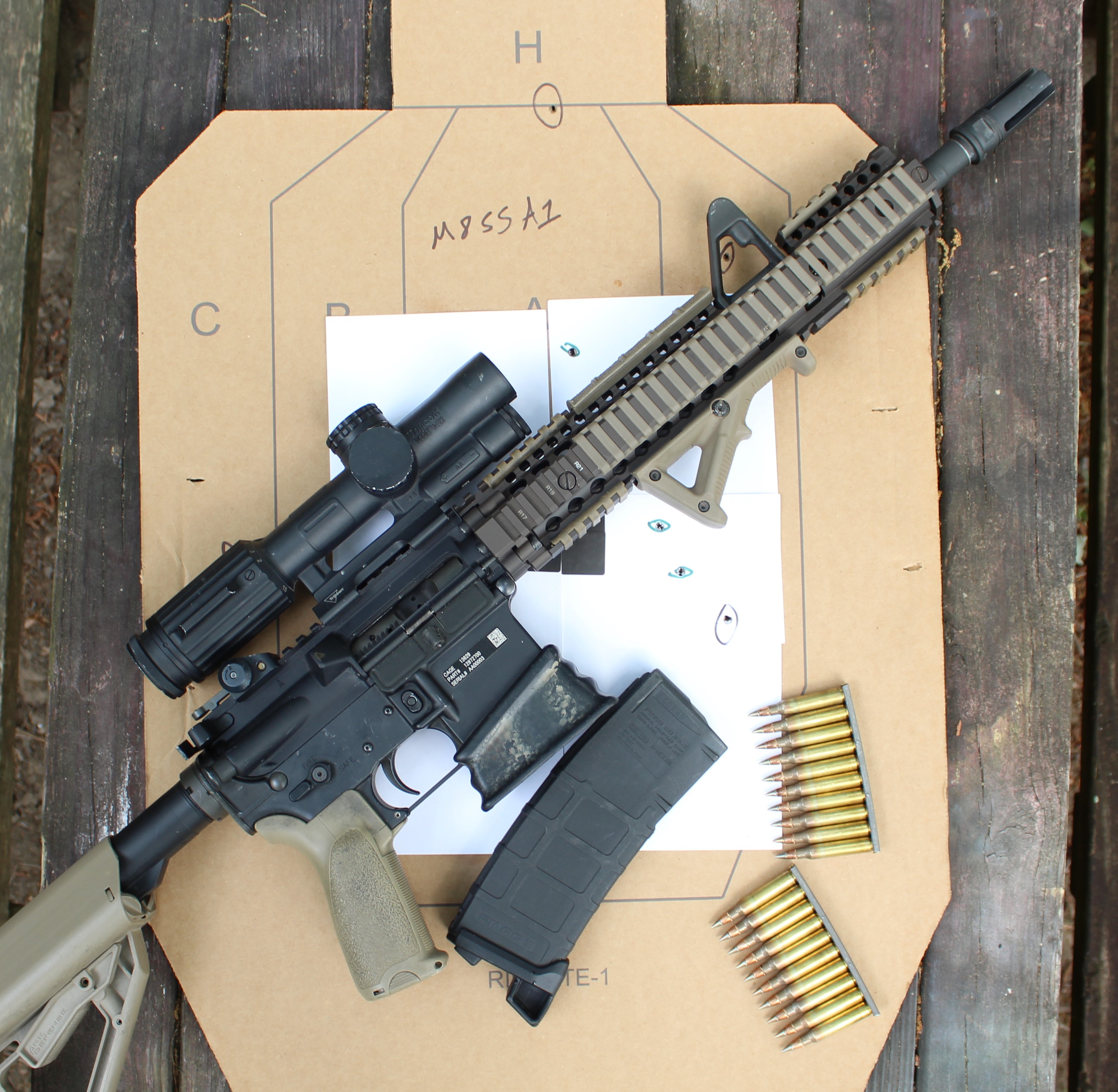 Seeing how M855A1 averaged around 2 MOA, I think that’s pretty good for mass-produced ammunition from a MIL-SPEC barrel. Is it match-like accuracy? For me, no. With a US military-issued carbine, I think anything around 1.5 MOA could be considered match performance. At least that’s what one can expect using MK262 77gr ammunition. Is M855A1 more accurate than M855? I think yes. Had I shot even more strings of fire, I think we would’ve seen consistantly tighter groups with M855A1 over M855 at the different ranges.

But, back to the original claims of 95% hits in a 8×8 inch box at 600 with a M4 carbine, I’m going to say doubtful. Now. if the rumors are true and it was done with a M16A2 with match-grade barrel (and a better shooter than me), I think it’s totally feasible. I guess the only question now is, would I use if I were to deploy again back down range? My answer is yes. It did perform better than I expected, producing tight enough groups at 500 yards that I wouldn’t feel held back using it if I had to. However, if I had the choice between M855A1 and MK262 for long range shooting (anything past 300 yards), I’d still prefer the more accurate MK262, the one type of 5.56 ammunition that the military can truly call “match-like”.

M855A1 Penetrator Ammo Accuracy: How Good Is It, Really? by David Crane

David Crane started publishing online in 2001. Since that time, governments, military organizations, Special Operators (i.e. professional trigger pullers), agencies, and civilian tactical shooters the world over have come to depend on Defense Review as the authoritative source of news and information on "the latest and greatest" in the field of military defense and tactical technology and hardware, including tactical firearms, ammunition, equipment, gear, and training.
Previous Mossberg 590M Heat Shield Mag-Fed Pump-Action Combat/Tactical Shotgun: Up to 20 rounds of 12-Gauge Firepower, and Quick Full-Capacity Reloads! (Videos!)
Next Magpul Suppressor Cover – 5.5″ for Round 5.56mm NATO Muzzle Cans (Silencers/Sound Suppressors) during Combat Ops: Lowers Outer Suppressor Heat and Thermal Signature! (Video!)